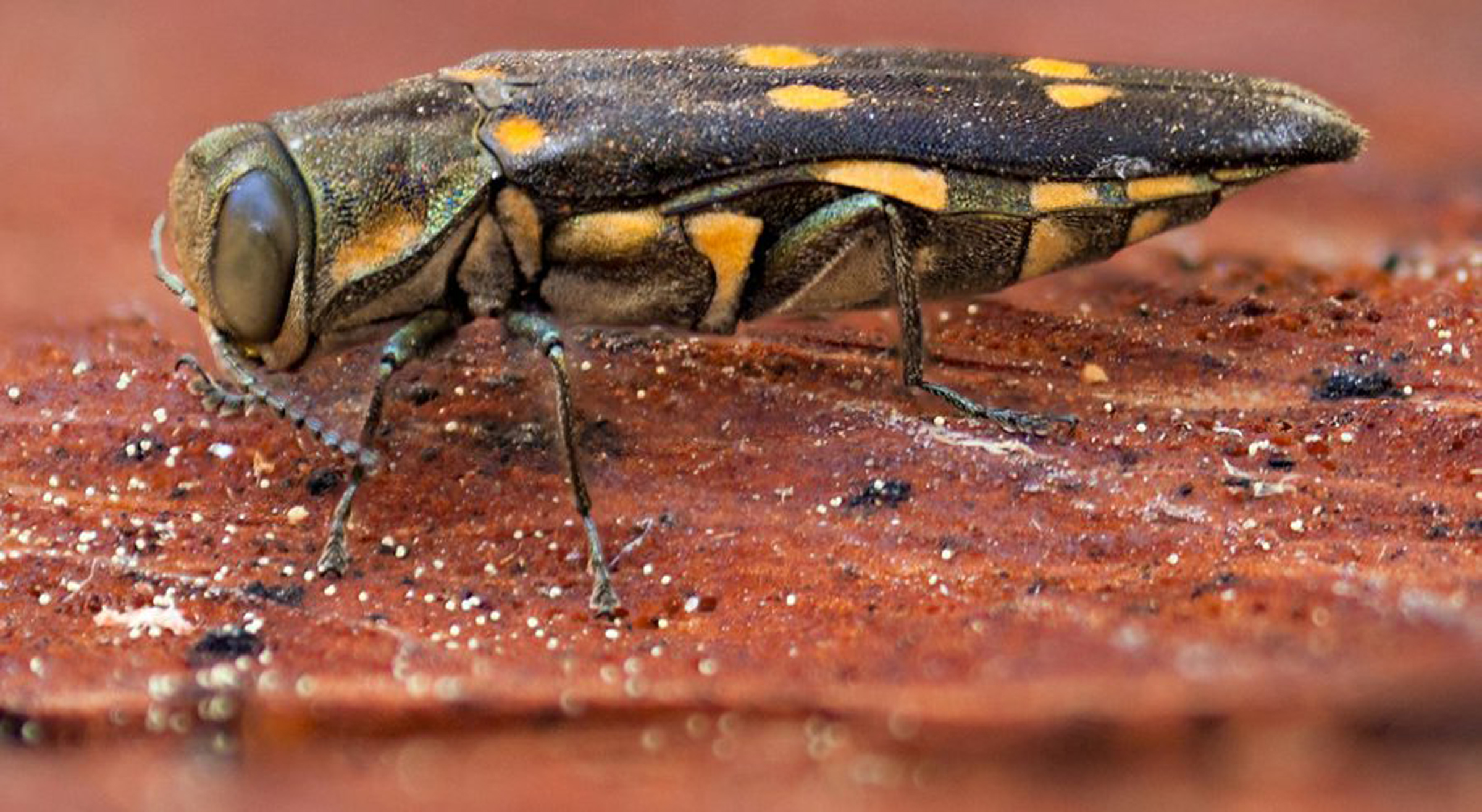 The gold-spotted oak borer is only in limited areas, and officials would keep it that way, because our oaks are already being killed by the Western Oak Bark Beetle, a native species run amok. Photo courtesy of USDA 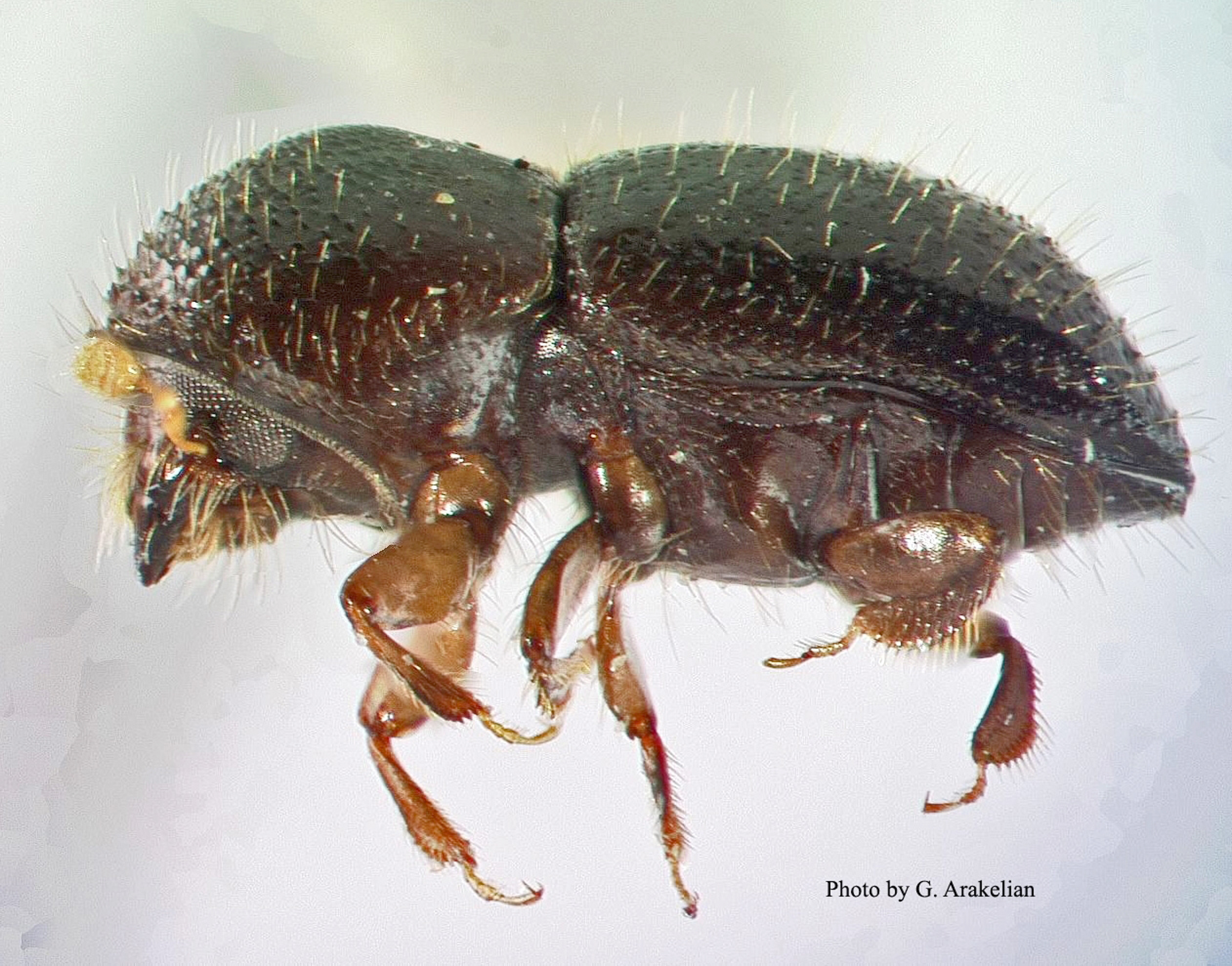 The polyphagous shot hole borer is smaller than a grain of rice and spends most of its life inside the tree. This insect is a major problem in L.A. County, killing native and non-native trees and spreading rapidly. Photo by A. Arakelian 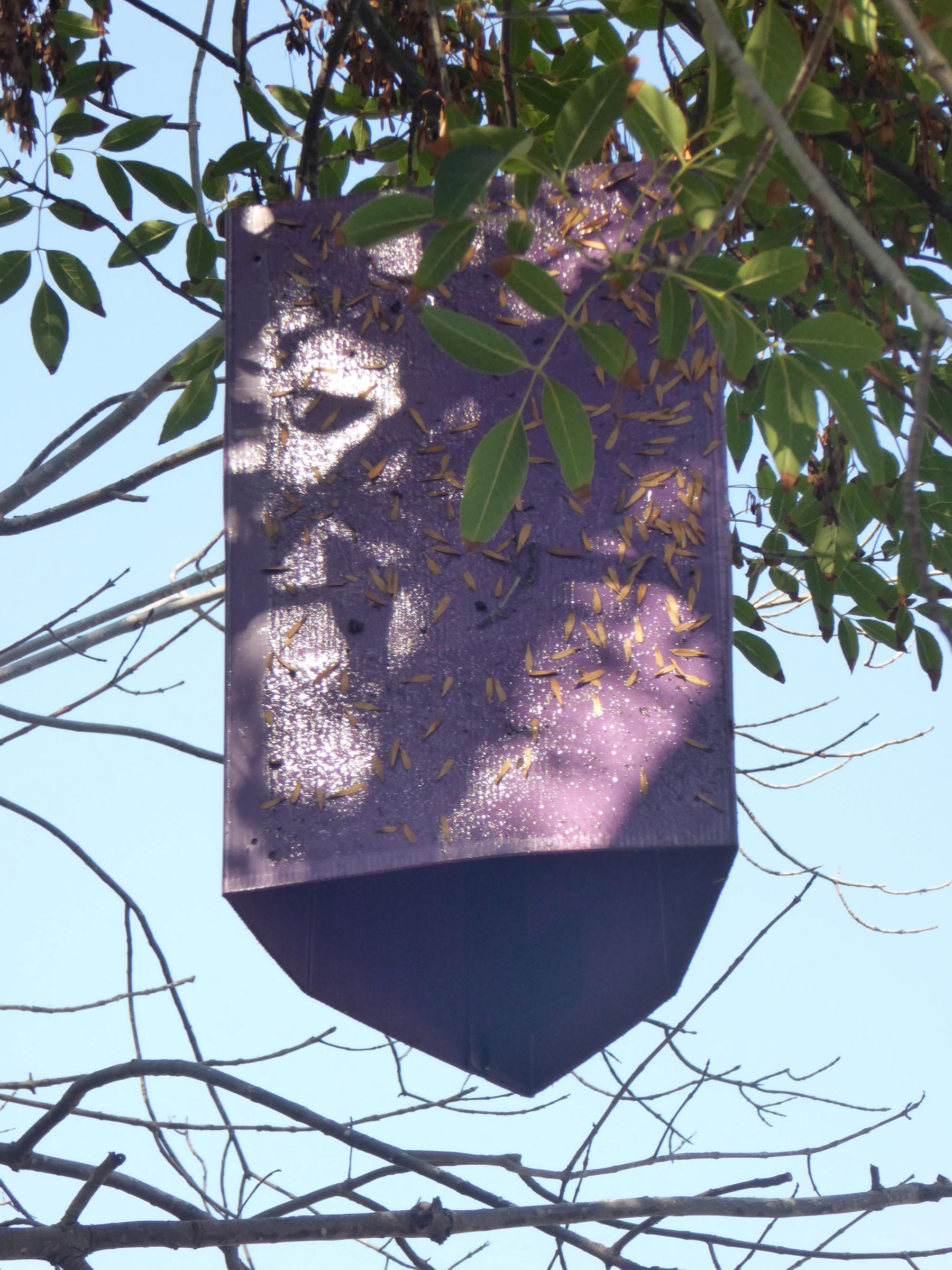 Lantern-like traps are being used to monitor for the latest tree invader, the emerald ash borer. Photo by Suzanne Guldimann

The trees that shade, nurture and provide the Santa Monica Mountains area much of its character, beauty and essential habitat are under threat.

Invasive beetles, including the polyphagous shot hole borer and the gold-spotted borer are wreaking havoc on California’s urban and wildland tree populations from Ventura to the Mexican border. They’ve joined the renegade native western oak bark beetle and a number of earlier invaders in a war on local trees.

In the April 26, 2017, Los Angeles Times, journalist Louis Sahagun, described the bugs as having “a stranglehold on L.A.” Sahagun quoted Greg McPherson, a research forester with the U.S. Forest Service studying the problem, who stated that, “We’re witnessing a transition to a post-oasis landscape in Southern California.”

That unprecedented die-off includes native oaks, willows and sycamores, as well as garden trees like liquidambars and box elders, and commercial crops like avocados and olives.

All over the Santa Monica Mountains, government and conservation agencies are tracking the progress of the bugs and residents can help. Many Topanga-area residents have already participated in a joint project of the Resource Conservation District of the Santa Monica Mountains (RCDSMM) and UC Riverside, trapping oak pests using homemade traps created from soda bottles. That study is winding down.

Rosi Dagit, the senior ecologist for the RCDSMM told the Messenger Mountain News that the next phase of the project will involve NASA analysis to help determine the direction of the threat. “It’s a work in process,” she said. “Tell your readers we’ll be giving an update soon.”

While infestations of the gold-spotted oak borer are currently limited, the shot hole borer is rapidly becoming a countywide epidemic.

This tiny beetle spends most of its life inside the tree it infects, where it lives off a type of fungus called fusarium that it injects into the wood. That makes it hard to spot. Telltale signs include small holes and weeping patches on the tree’s bark. More serious symptoms include die-back. Branches riddled by the fusarium fungus may be more prone to break.

Most trees infected by the shot hole borer will die. Removing them may help slow the spread of the pest, but inexperienced tree cutters may make the situation worse by spreading the infection with their equipment.

Ken Pellman, the public information officer for Los Angeles County’s Agricultural Commissioner, recommends making sure that the tree cutter is aware of the problem and will take adequate precautions with tools and disposal.

Pellman added that it is safe to use infected wood for firewood onsite, but the wood should not be transported off site except for proper disposal. He suggests calling the state pest hotline at (800) 491-1899 to report anything unusual.

In some areas, large purple traps resembling Japanese lanterns are being set by state officials to monitor for the arrival of a new tree threat, the emerald ash borer.

The goal of the trapping program is prevention and containment. The traps may be left in a front yard garden if the plants targeted by any of these species are present. Residents are encouraged not to remove the traps. Pellman explained that the contact number is on each trap, and residents are encouraged to call for information.

One way property owners can help is by opting to plant native trees. All trees should be adequately watered and mulched annually to keep them healthy and help prevent future insect issues.

The Tradition Continues at Brandywine