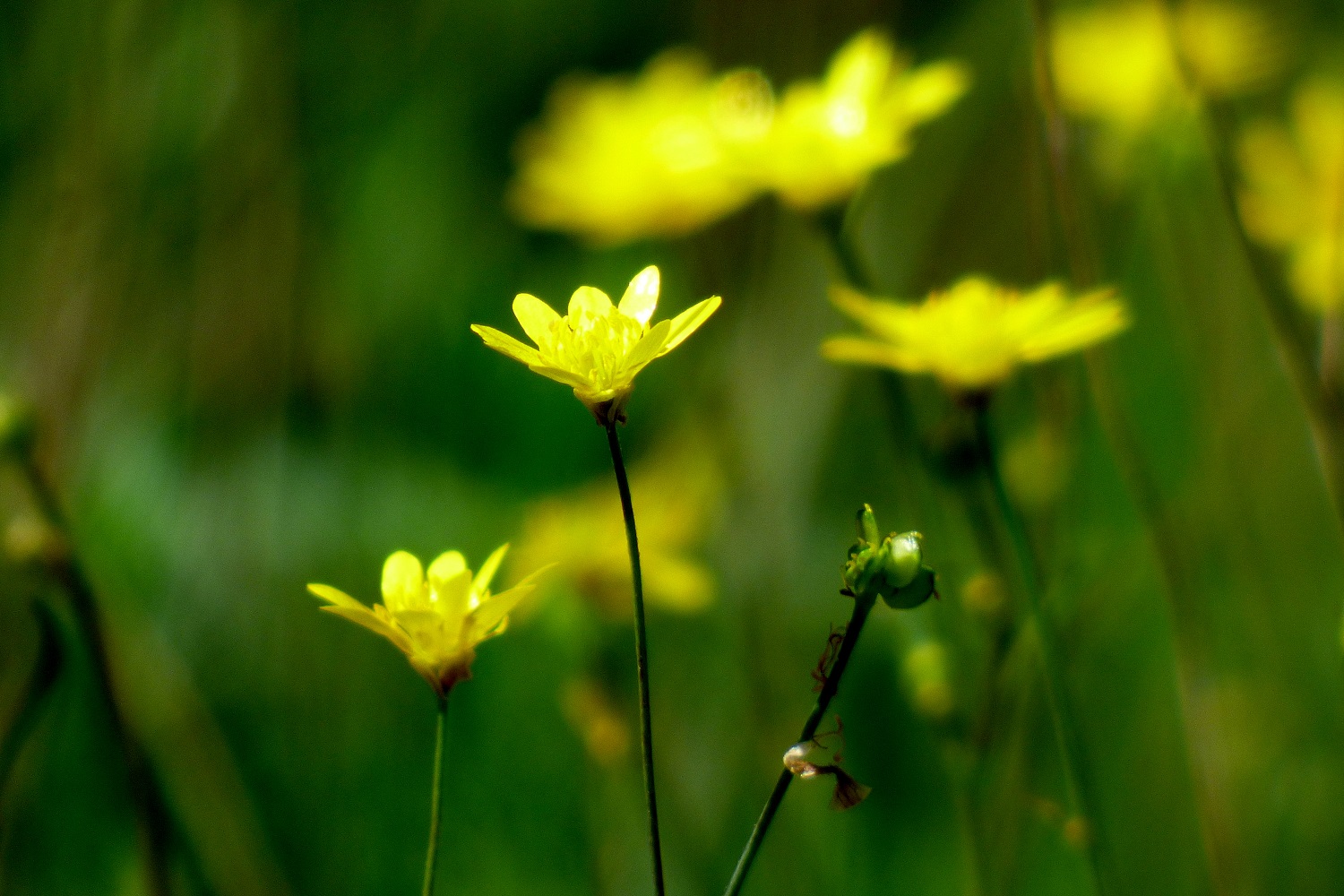 There is just one native buttercup in the Santa Monica Mountains, the California buttercup, but you don’t need to travel into the burn zone to find this small but beautiful member of the rannuncula family. This clump of flowers was spotted growing right along Topanga Canyon Blvd., not far from the Messenger Mountain News’ office. 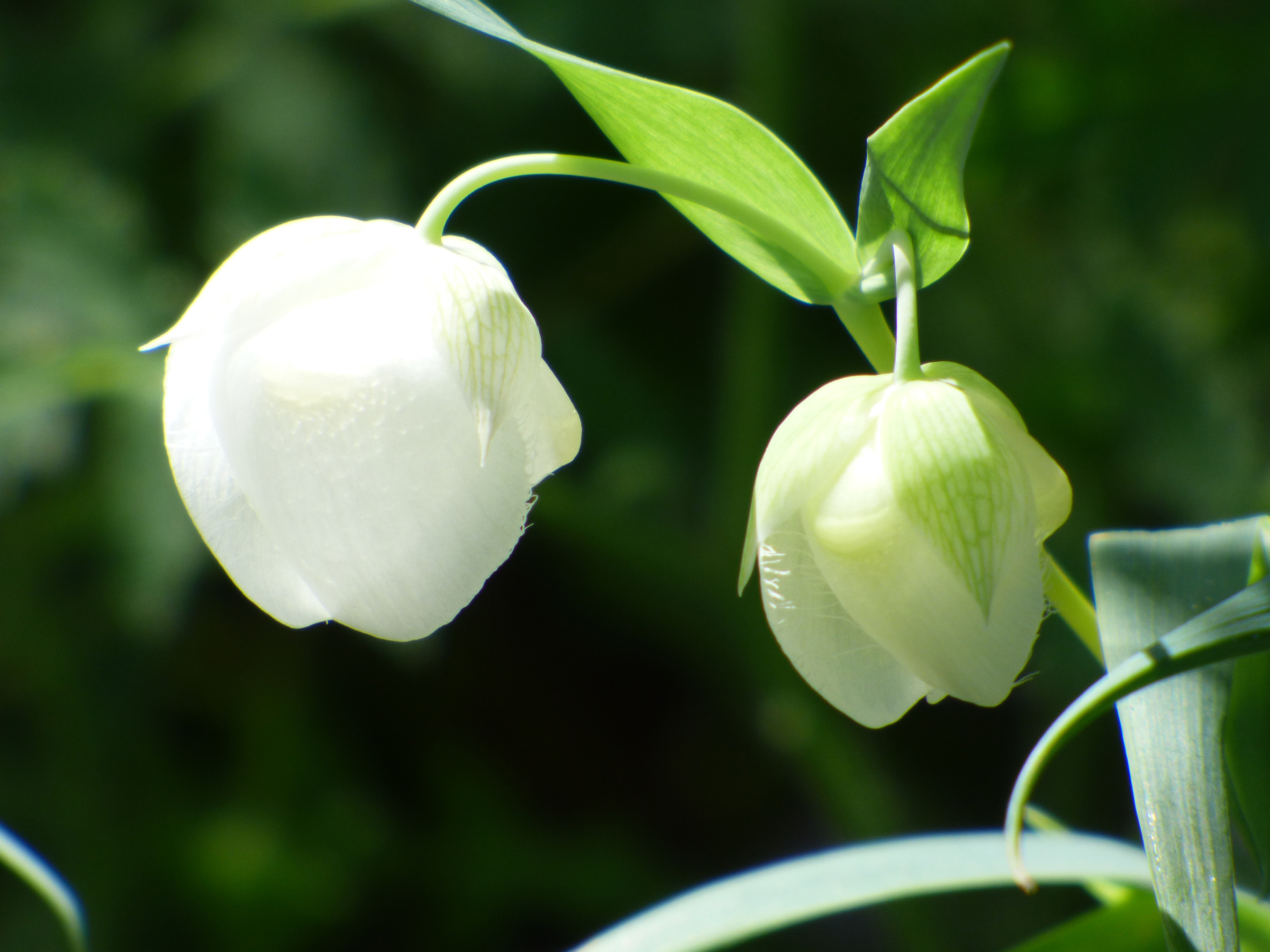 Globe lilies, close relatives of the mariposa lilies, are just starting to bloom. Large numbers of this ephemeral flower have sprouted in the aftermath of the Woolsey Fire. Look for globe lilies on sheltered slopes near creeks or drainages. Photos by Suzanne Guldimann unless otherwise stated. 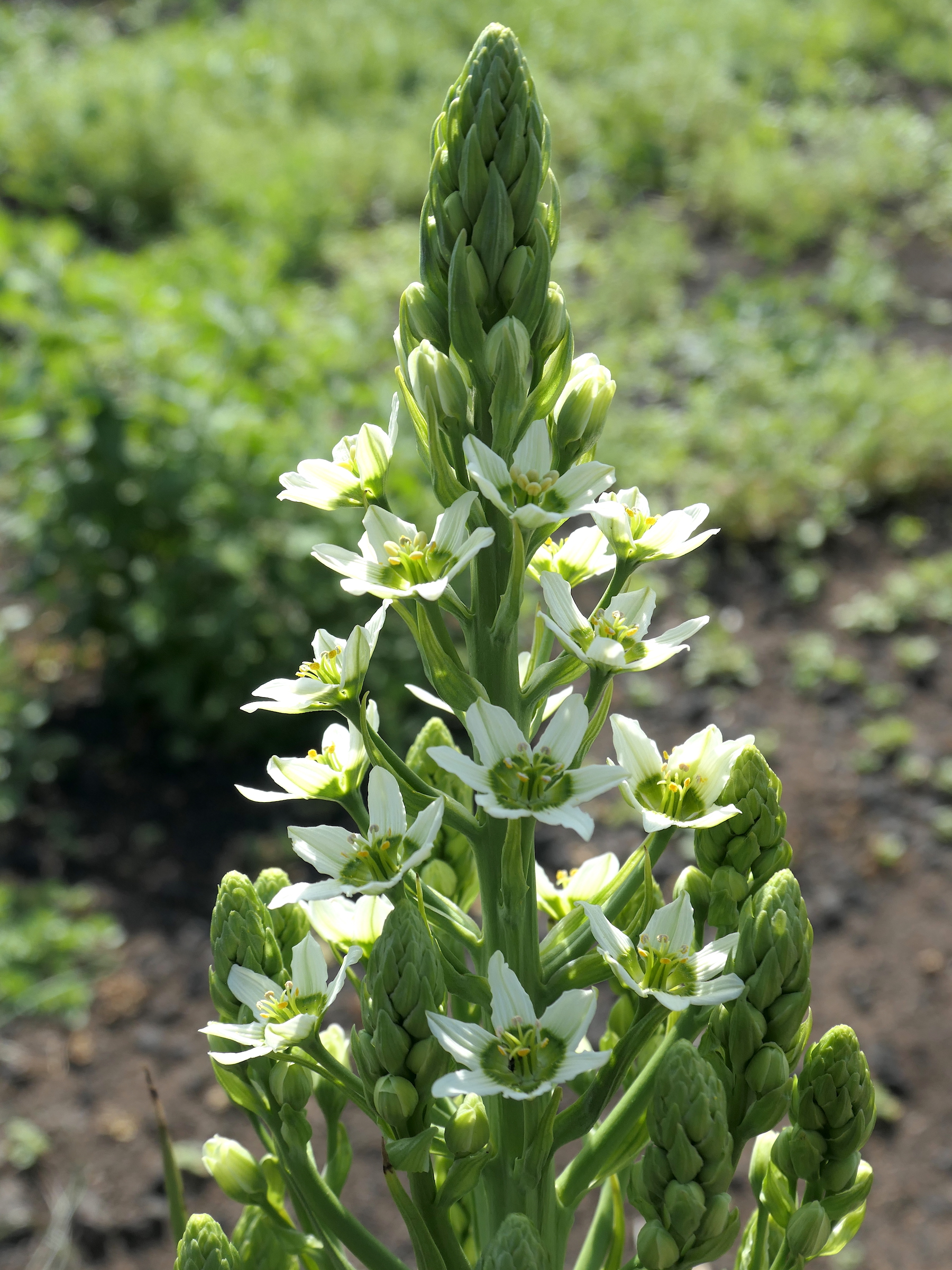 The star lily is another true fire follower whose seeds can lay dormant for years. This beautiful flower’s Latin name, Toxicoscordion fremontii, reveals that it is toxic. All parts of this plant contain a powerful alkaloid poison, but the seeds have especially high concentrations of the toxin. Photo by Ann Dittmer 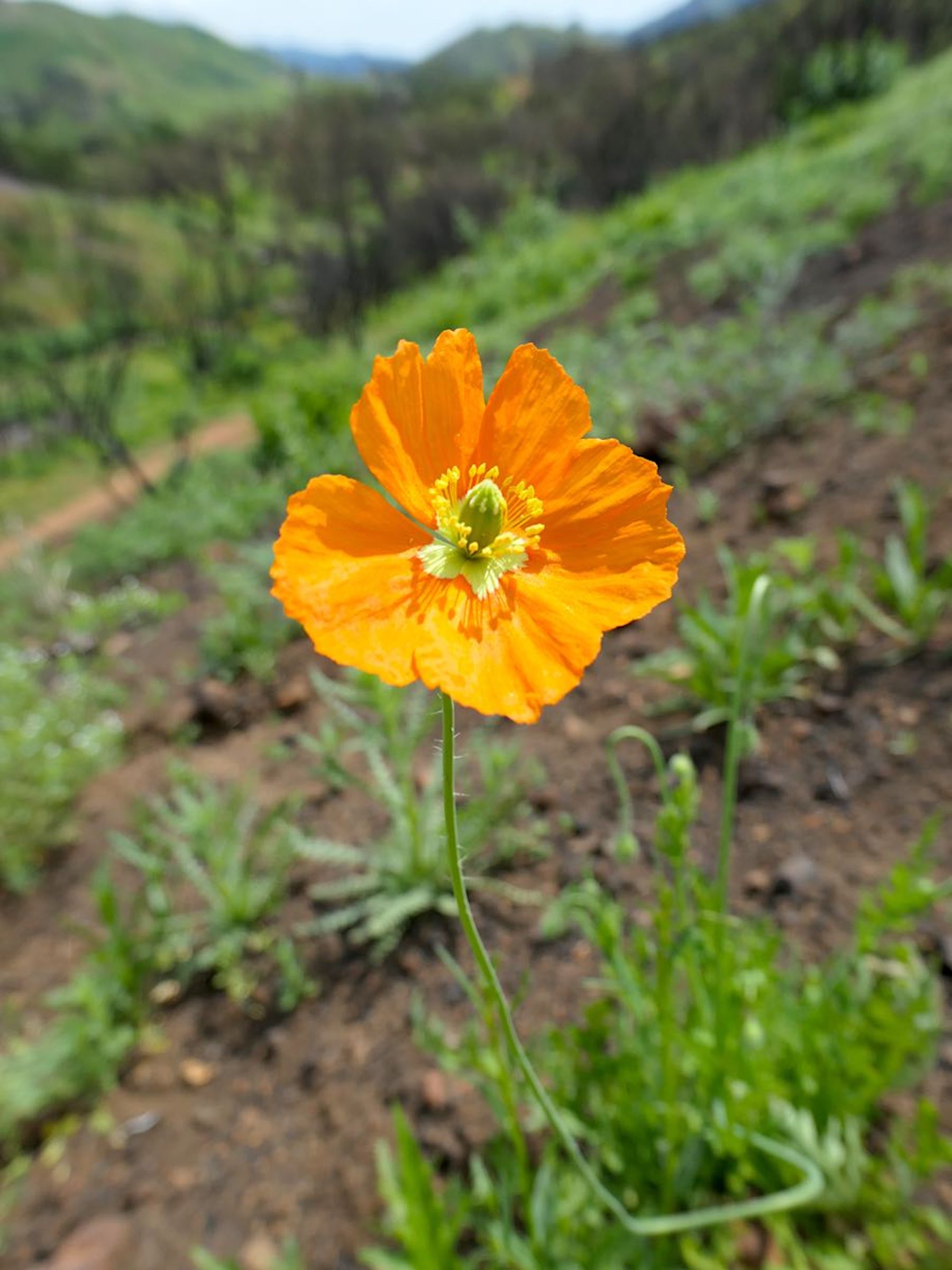 Fire poppies are the holy grail of fire-following wildflowers. Their seeds can remain dormant in the soil for decades, requiring fire to germinate. This photo was taken by Messenger Mountain News contributor Ann Dittmer. 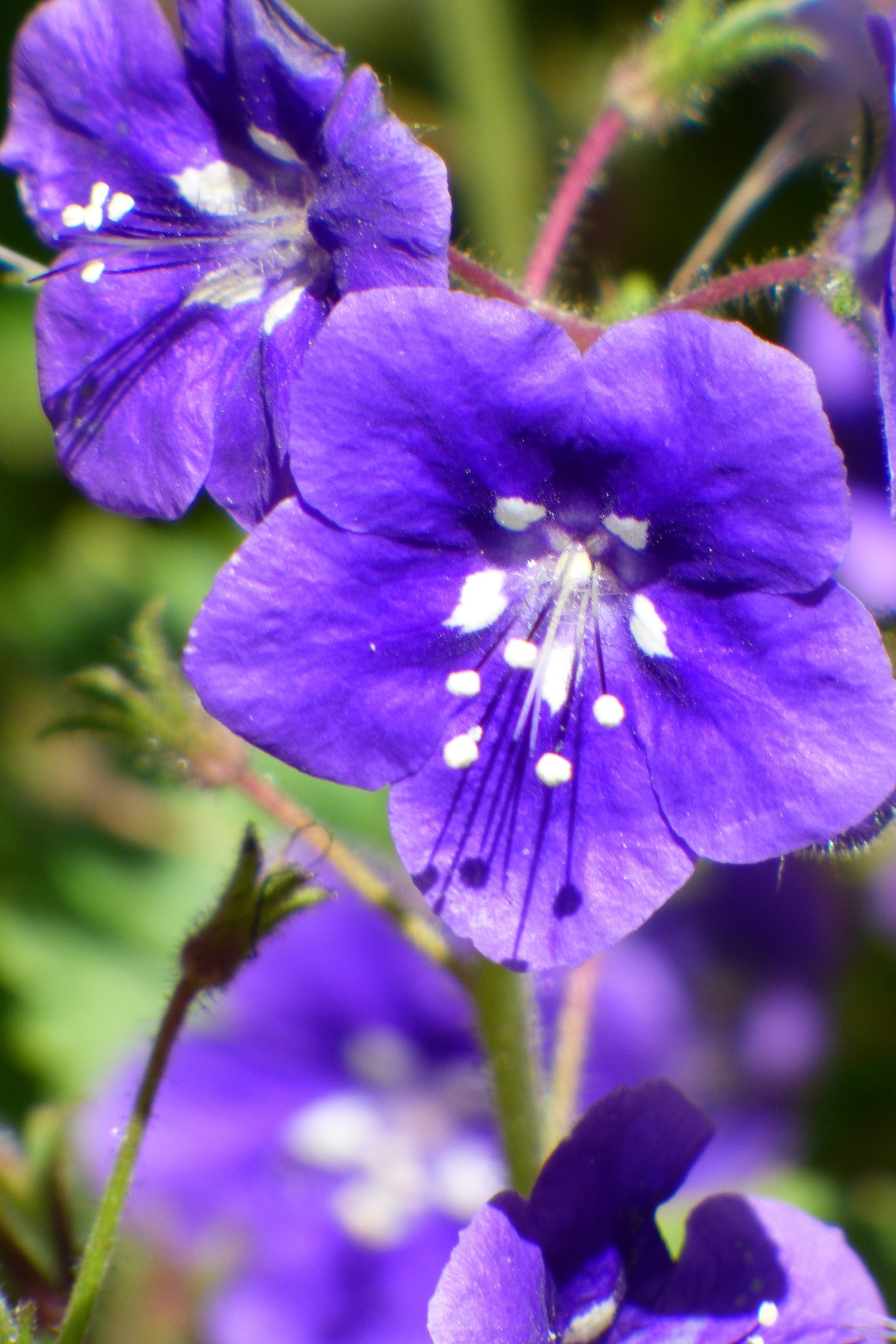 Beautiful blue-purple Parry’s phacelia is one of the dominant post-fire flowers. It continues to, bloom in huge numbers throughout the Woolsey Fire burn zone, together with its close relatives sticky phacelia (pale blue/violet), and common phacelia (pale lavender). Many members of the species can cause contact dermatitis, so it’s a good idea to admire this flower from a distance. 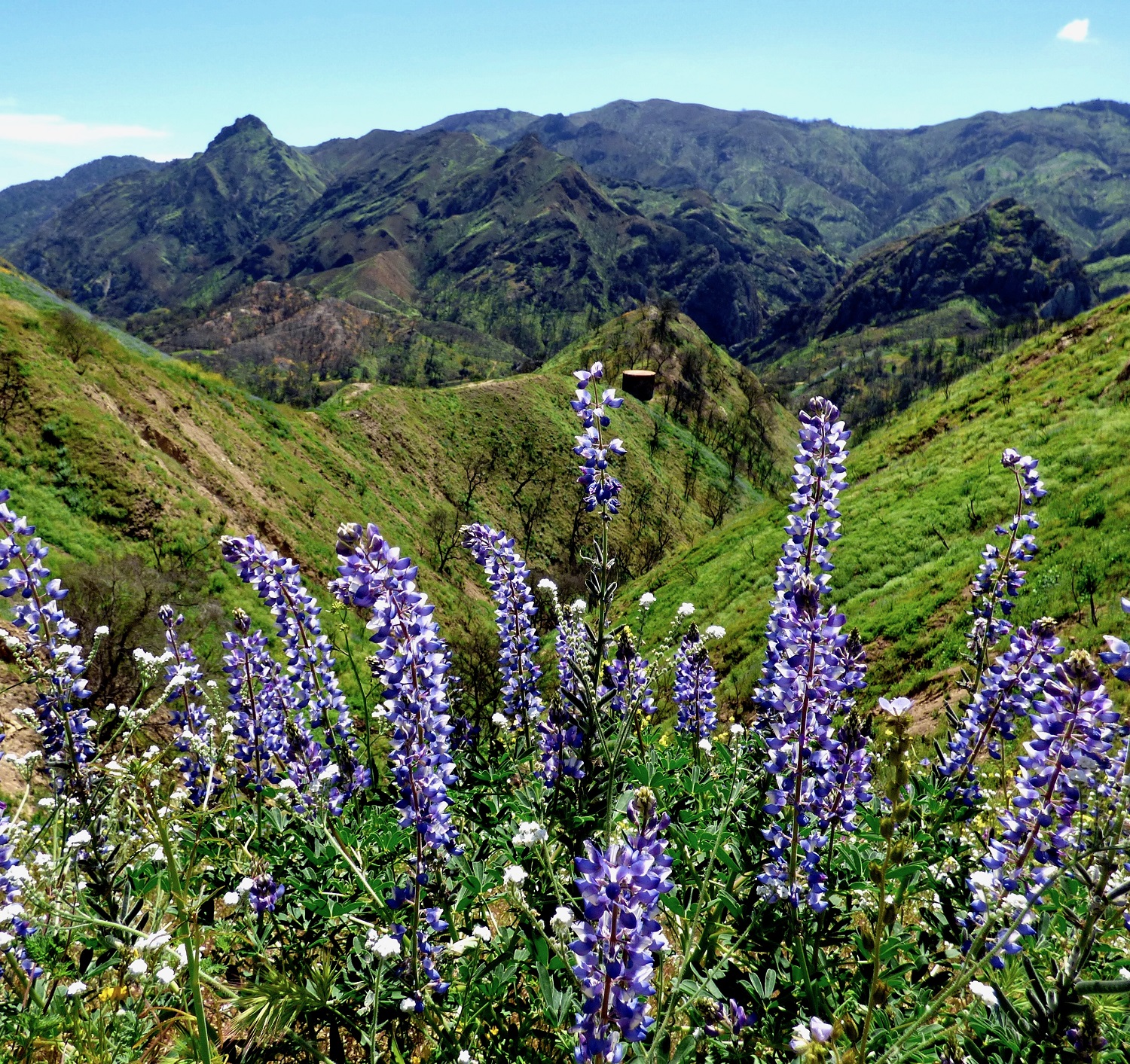 The lupines that have covered vast swaths of the Woolsey Fire burn zone in a cloak of blue flowers have peaked and are beginning to go to seed, but they are still blooming. This is the Cistern Trail overlook on Mulholland Highway, looking down into Malibu Creek State Park. 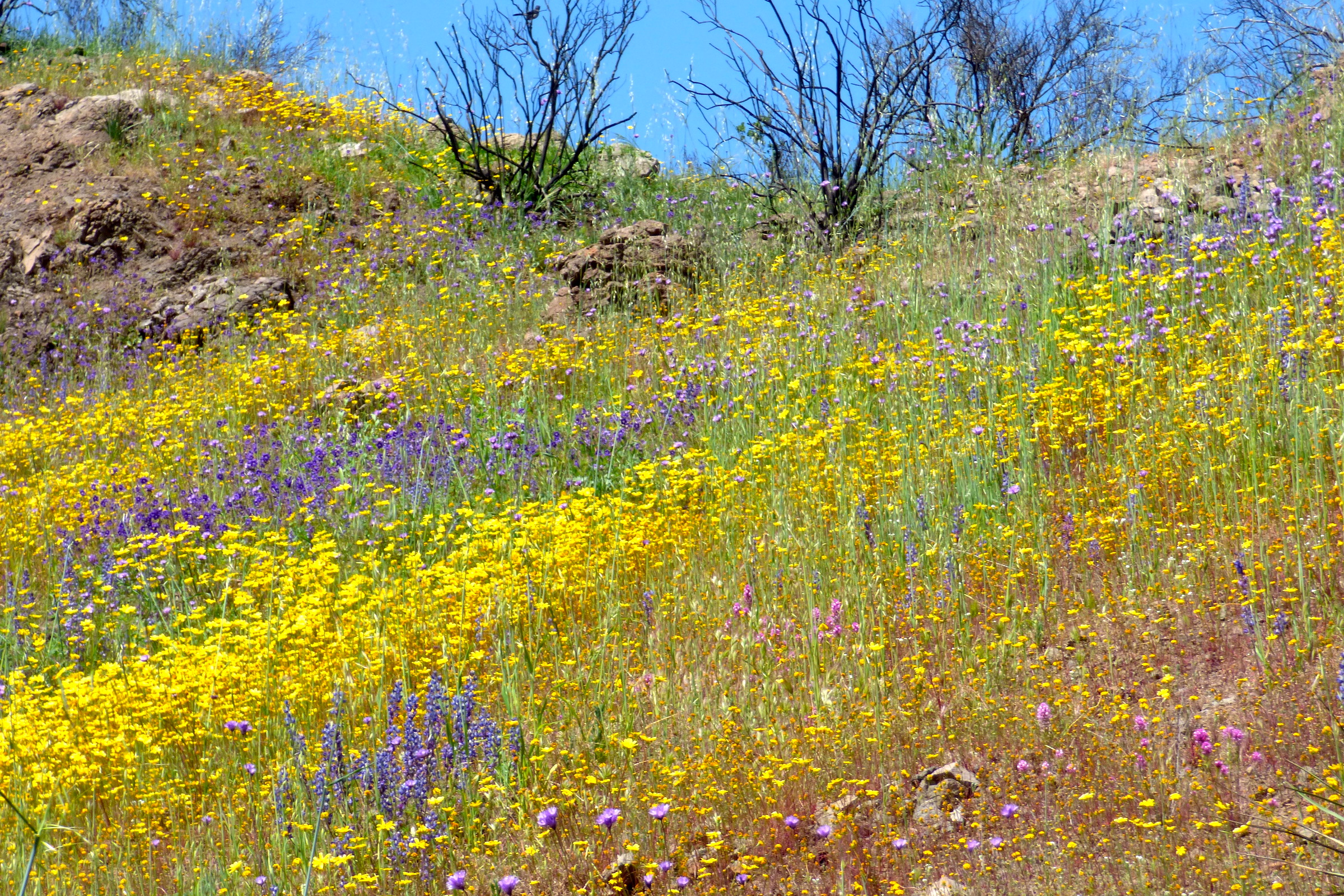 As the weather warms, the orange of the poppies is giving way to a mix of colors: goldfields, owls clover, blue larkspur, and successive species of wildflowers that bloom and go to seed. 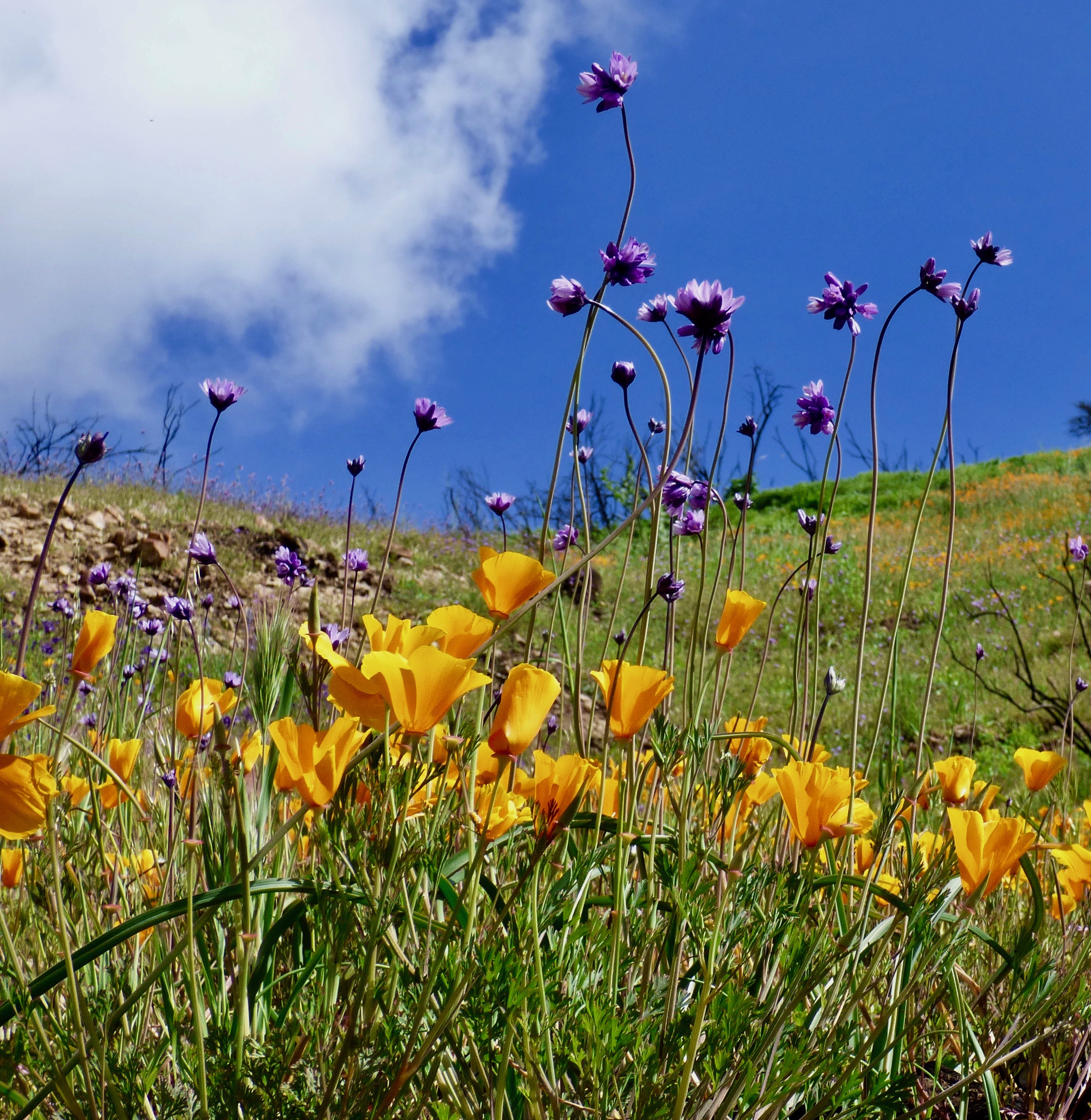 California poppies and bluedicks were among the first flowers to appear after the winter rains. They are beginning to go to seed, but can still be spotted in sheltered locations.

The shooting stars have gone to seed and the poppies are almost finished blooming, but successive waves of new wildflowers in the Santa Monica Mountains continue to make this year’s wildflower season “super.” The variety and abundance of flowers in the Woolsey Fire burn area continues to dazzle, but this continues to be a strong season for wildflowers throughout the Santa Monica Mountains and Southern California.

Malibu Creek State Park continues to be a popular destination for wildflower seekers. Nearly the entire 8,215-acre park was impacted by the Woolsey Fire. The scorched slopes above Crags Road trail, the main route through the park, are now covered in new growth, including vast swaths of blue lupines.

Paramount Ranch is another good choice for post-fire wildflowers. Look for wild blue larkspur, and while hiking offers an up-close immersive wildflower experience, plenty of wildflowers can also be seen by driving through the area.

The scenic corridor along Mulholland Highway from Las Virgenes Canyon Road to Cornell Road offers a spectacular look at wildfire wildflowers. For a longer drive, take Kanan Dume to Pacific Coast Highway and then drive up the coast to Point Mugu State Park, or take the 101 west to Triunfo Canyon Park, at the end of Lindero Canyon Road, another area that is currently showcasing a near-miraculous display of fire-following wildflowers

Although the poppies are beginning to go to seed, there are still vibrant patches of orange blossoms throughout the Santa Monica Mountains. Look for pink clarkia, known as “farewell to spring” as the early bloomers begin to fade, along with purple vetch, and white “popcorn” flowers.

The phacelia family is a standout this spring in the burn zone. Parry’s phacelia is the showiest, followed by blue-violet sticky phacelia;  more than a dozen members of this plant family are blooming in the local mountains, and many have showy blue or purple flowers.

An unfortunate side effect of this year’s spectacular bloom statewide is social media attention that has brought high volumes of visitors to some areas, resulting in traffic jams and sometimes loss of habitat, as eager flower seekers and would-be “influencers” trample the plants they have come to see.

So far, the Santa Monica Mountains National Recreation Area (SMMNRA) has not attracted the crowds seen at some of the other wildflower hotspots, but many areas can be crowded, especially on a weekend.

Most visitors respect the parks they visit, but the small number determined to trample or pick wildflowers may get more than they bargained for. Nettle lupines live up to their name, and many members of the phacelia family can cause contact dermatitis. Wildflowers attract all kinds of visitors, including bees and wasps. Rattlesnakes also seek the shelter provided by the plants, and sightings have proliferated lately. Also keep an eye out for poison oak that can grow among the flowers.

To avoid crowds it’s a good idea to go early, or plan a weekday visit. Wildflower sites that require visitors to hike in will always be less crowded than those located in easy reach of parking.

Topanga Canyon residents have an abundance of spring flowers closer to home. Look for wild hyacinth, bush lupine, and popcorn flowers in Topanga State Park, while pale purple fiesta flowers and bright yellow California buttercups can be spotted among the non-native yellow oxalis along the boulevard.

Some areas of the SMMNRA remain closed due to the fire or are difficult to reach because of road work or, in the case of Circle X Ranch in the western end of the range, a sinkhole and landslide.

Joe Blaustein & the Flood of Florence