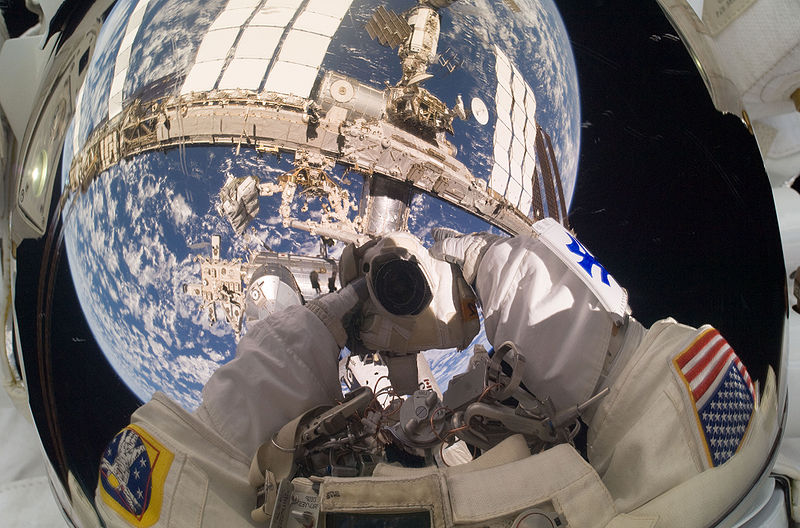 Above, Reisman's space selfie from on top of the International Space Station, with the ISS and Earth reflected in the helmet of his spacesuit. Photo courtesy of NASA 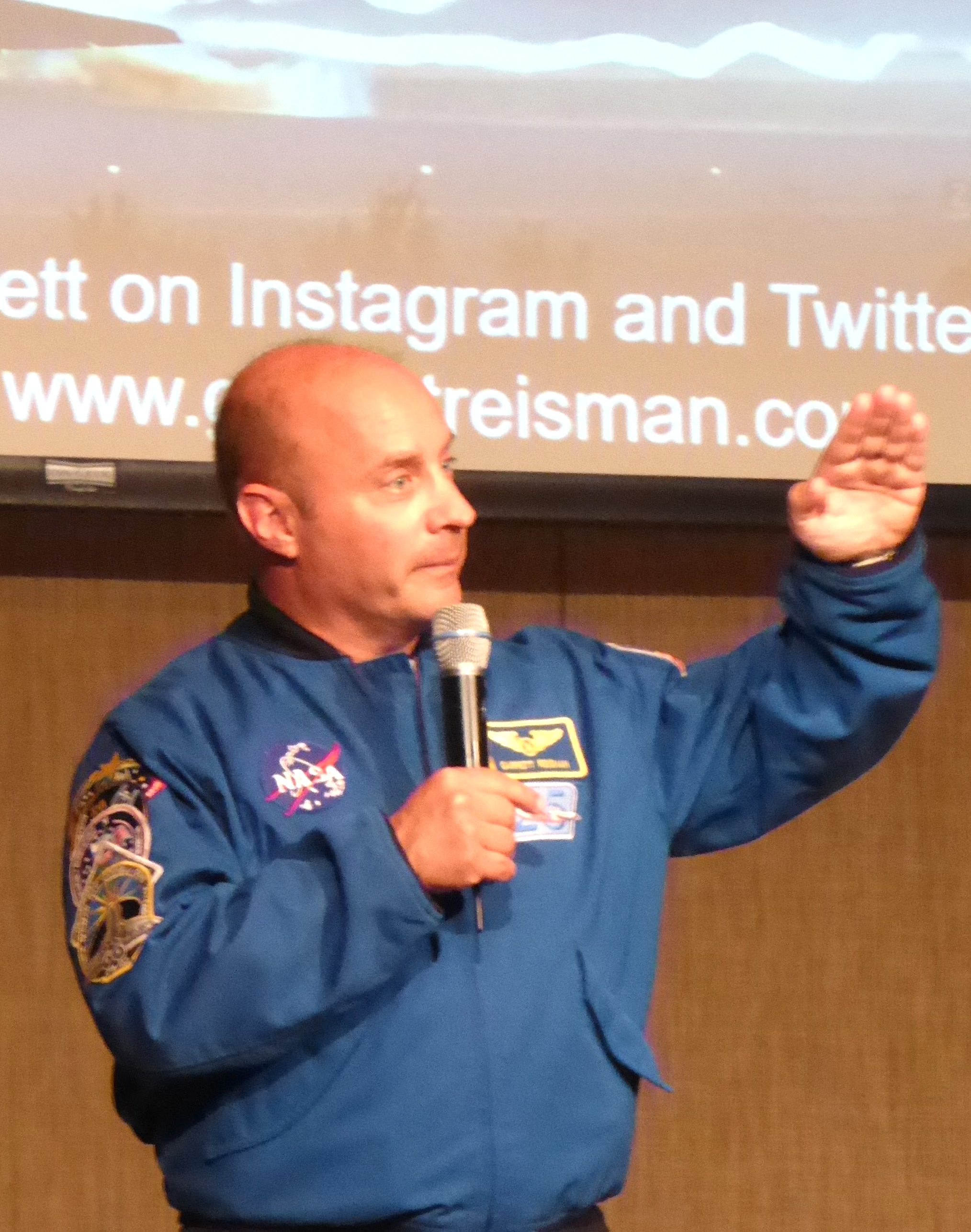 Reisman delighted and energized his audience at the Malibu Library Speakers Series. He’s one of very few guest speakers to have received a standing ovation. Photo by Suzanne Guldimann 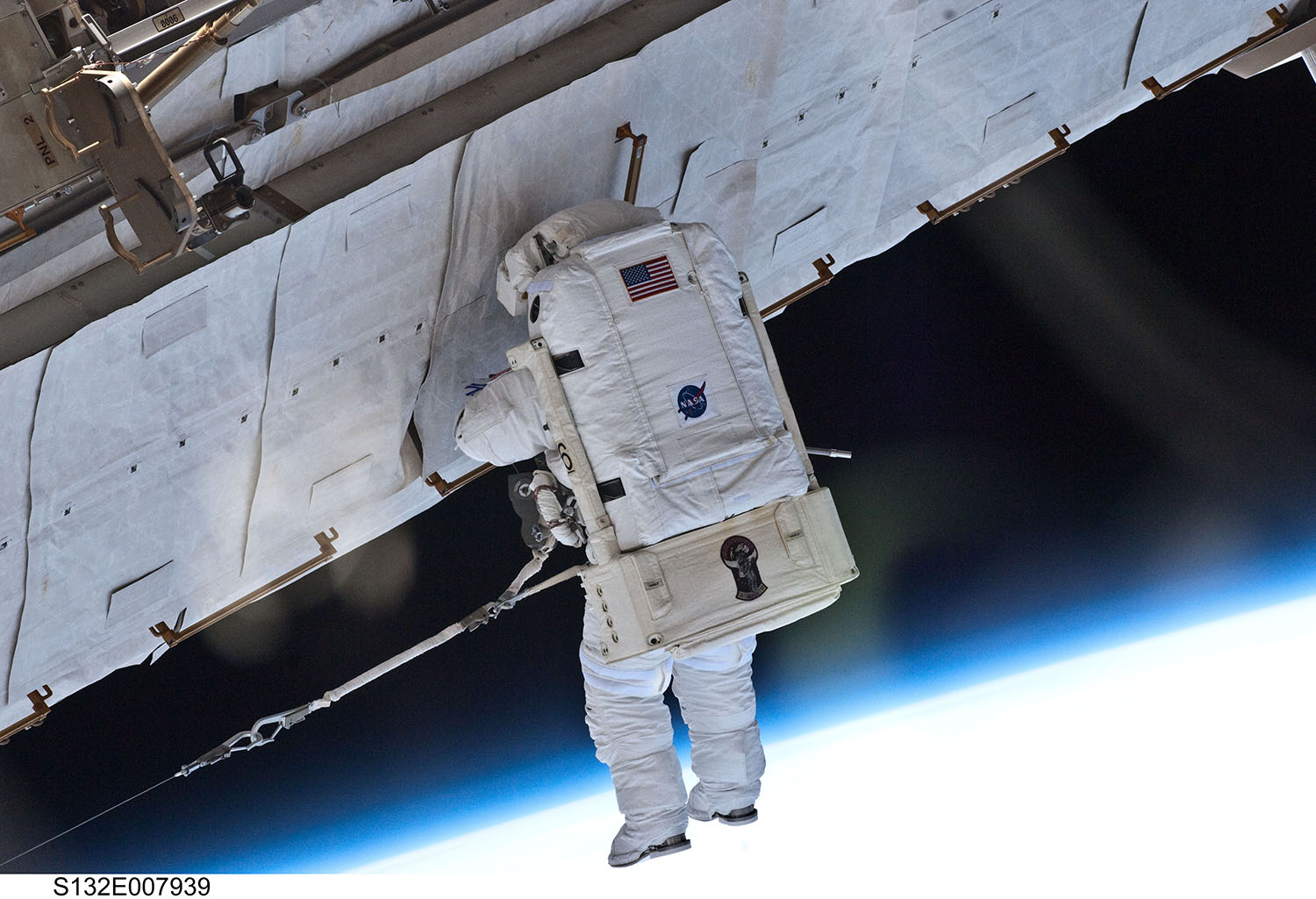 NASA: Reisman at work in space during one of his two spacewalks.

DR. GARRETT REISMAN DELIGHTED AND ENERGIZED HIS AUDIENCE AT THE MALIBU LIBRARY SPEAKERS SERIES AND RECEIVED A RARE STANDING OVATION.

Former NASA astronaut Dr. Garrett Reisman has spent more than 110 days in space on board the Endeavor and Atlantis shuttles and the International Space Station (ISS). He also conducted two spacewalks, logging 14 hours of extravehicular activity—EVA. When he hung up his spacesuit for the last time it was to sign on with Elon Musk’s Space X, with the goal of helping to launch a new golden age of space exploration.

This isn’t the future that requires President Donald Trump’s military Space Force, but one that continues to develop the goals established by NASA in the 1950s: returning to the Moon, sending humans to Mars, and propelling the human race into space as an interplanetary civilization.

Reisman shared his experiences and vision for the future as part of the Malibu Library Speaker Series with a standing-room-only crowd at Malibu City Hall.

Reisman doesn’t come across as a dreamer. He’s practical, and has a self-deprecating sense of humor. He opened his talk with a humorous account of the challenges of being too short for the one-size-fits-only-tall-people EVA space suit, and poked gentle fun at Astronaut Eugene Cernan’s famous quote, “I saw the world without any borders.”

“What did he expect?” Reisman quipped. “Dotted lines?”

Reisman shared the joys of his experience. “Space is awesome,” he said. “It’s like a dream. You can put out your arm and fly like Superman.”

He also shared descriptions of some of the grueling work that went into training for the program, including his determination to master that too-big EVA suit with the result of that effort being  what he described as “the most fun thing of all, a space walk.”

“I didn’t think I would ever get to do it,” he said. “I was too short, but I was determined. It was important to me.”

Training took place in an enormous 40-foot-deep pool of water used by NASA to simulate weightlessness. Reisman had to developed his own approach to operating the oversized suit.

Because EVA is incredibly expensive and dangerous for the astronauts, every second of extra-vehicular activity is used for the work required. However, while Reisman served as mission specialist aboard the Space Shuttle Atlantis in 2010, during an EVA mission that required him to operate the ISS robotic arm and attach the Russian-built Mini Research Module to the station, Reisman had the rare opportunity to pause for a moment six stories above the space station on top of the arm, to admire the view of Earth. He summed up the experience with one word: “magical.”

Leaving NASA was a difficult decision for Reisman. “Being an astronaut is the best job in the world,” he said. However, he was inspired by Elon Musk’s vision and offered to bring his experience as an astronaut and his background in mechanical engineering and robotics to Musk’s Space X Company. He told the audience that the private sector space race going on right now is the new “the golden age of spaceflight.”

Trump may envision a future that requires a military “Space Force,” but Reisman’s vision is more like Star Trek than Starship Troopers—peaceful exploration powered by the reusable rockets currently under development, not military weaponization.

“Elon wants to make human life multi-planetary,” Reisman said, describing Musk’s vision as a backup plan for Earth. “There is no pizza on Mars but we can try to make it that way,” he said.

Reisman stressed that Space X and the other private sector space companies are still working in close partnership with NASA. A new Space X rocket capable of sending two humans into orbit will be carrying NASA astronauts when it launches in the near future. Space X launches have successfully ferried supplies and equipment to the ISS. If this launch is a success, it will mark the first time since the end of the Shuttle program that the U.S. has had the capability to put humans in space. Currently, the U.S. and International space programs rely on Russian rockets.

Reisman encourages aspiring astronauts and rocket scientists to not just study math and science but to learn to love it. “Math class is astronaut training,” he told a young audience member.

If Reisman is right about the future, a new generation of astronauts will be needed, and soon.

“We’re ready to take another great leap,” he said.

The next Malibu Library Speaker Series event will be “Nuclear Delusions,” an evening with author and journalist Eric Schlosser, on Wednesday, September 5, at 6 p.m. at City Hall, 23825 Stuart Ranch Road, Malibu. The event is free, but RSVPs are required. RSVP online or call (310) 456-6438.