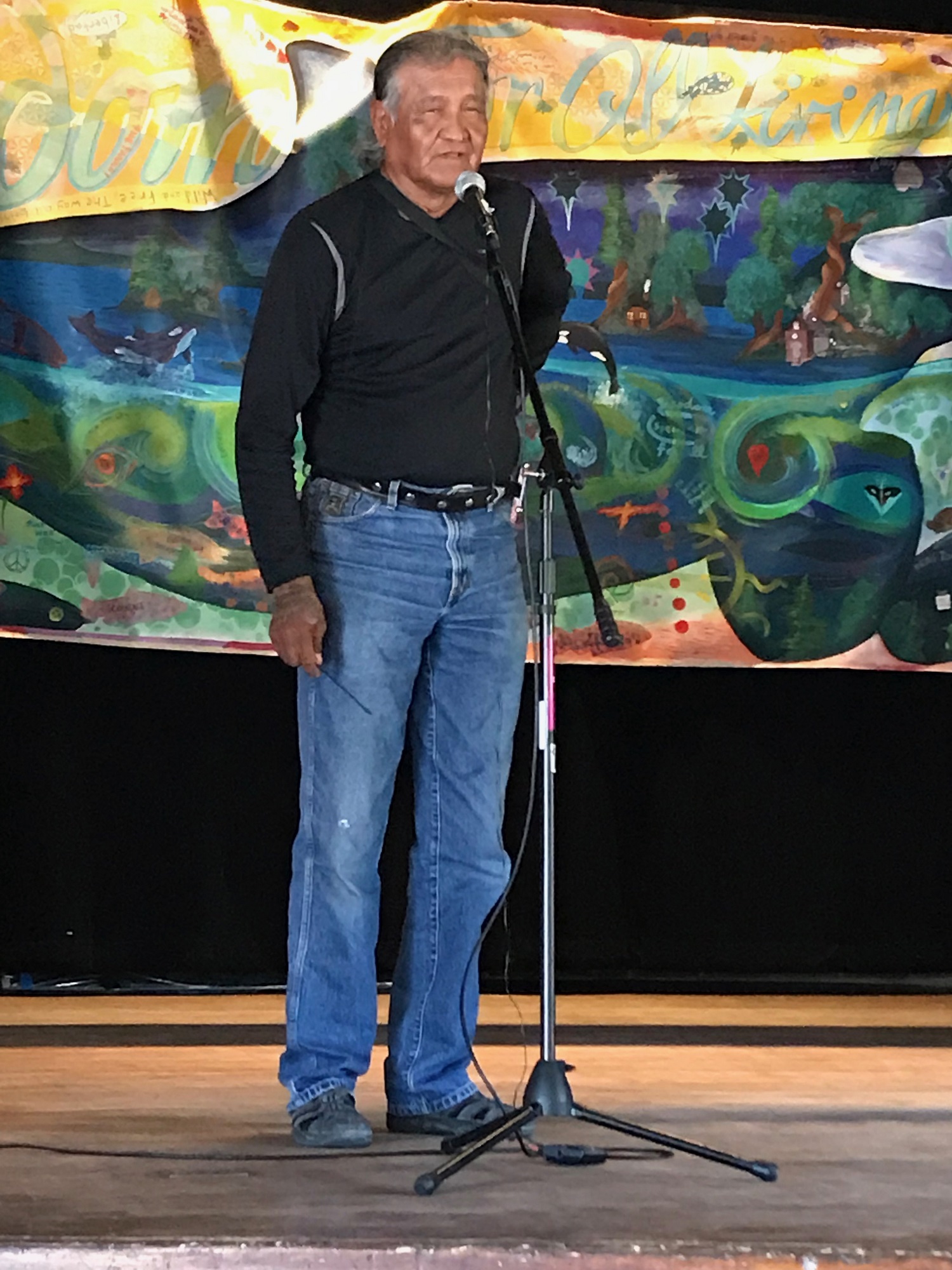 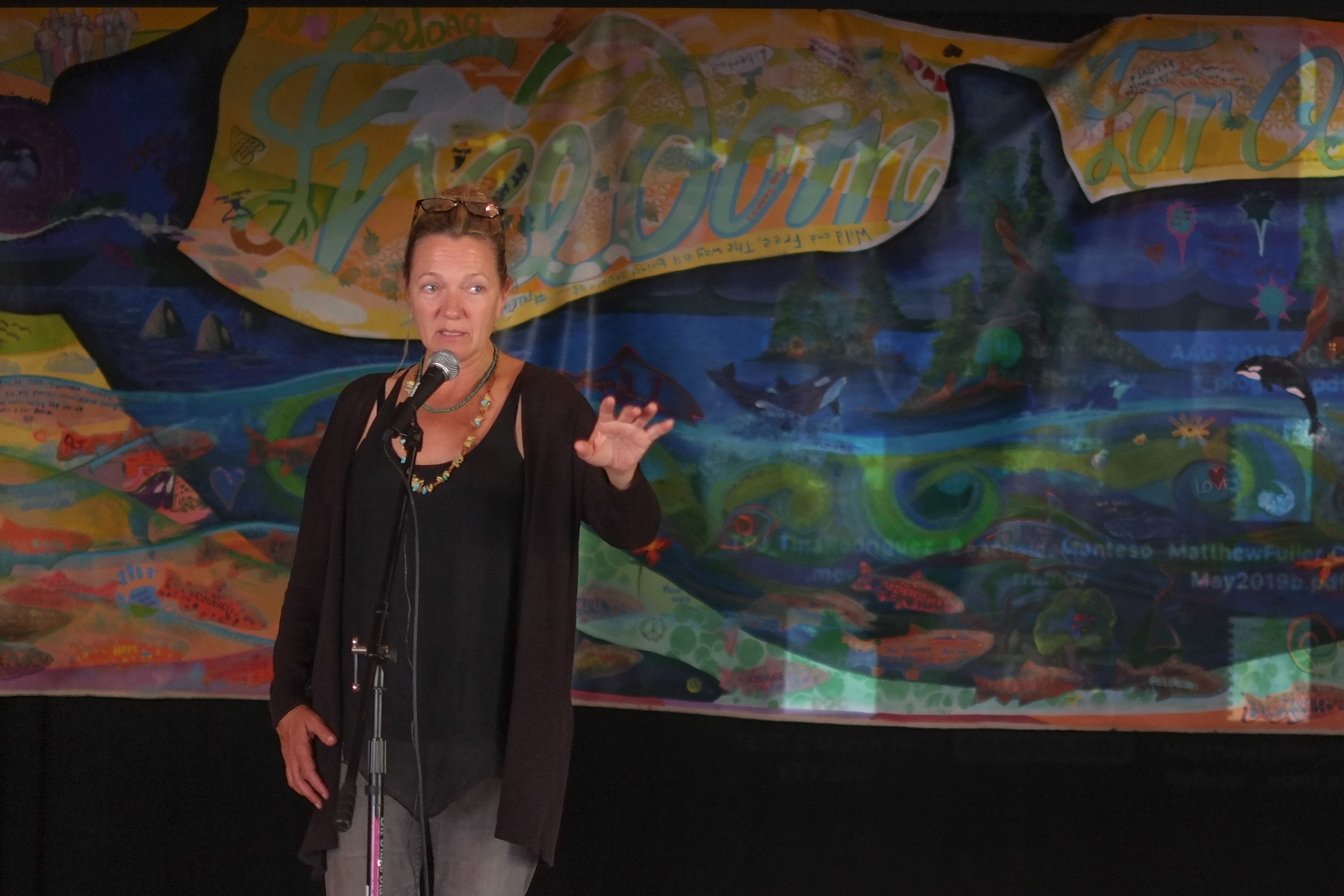 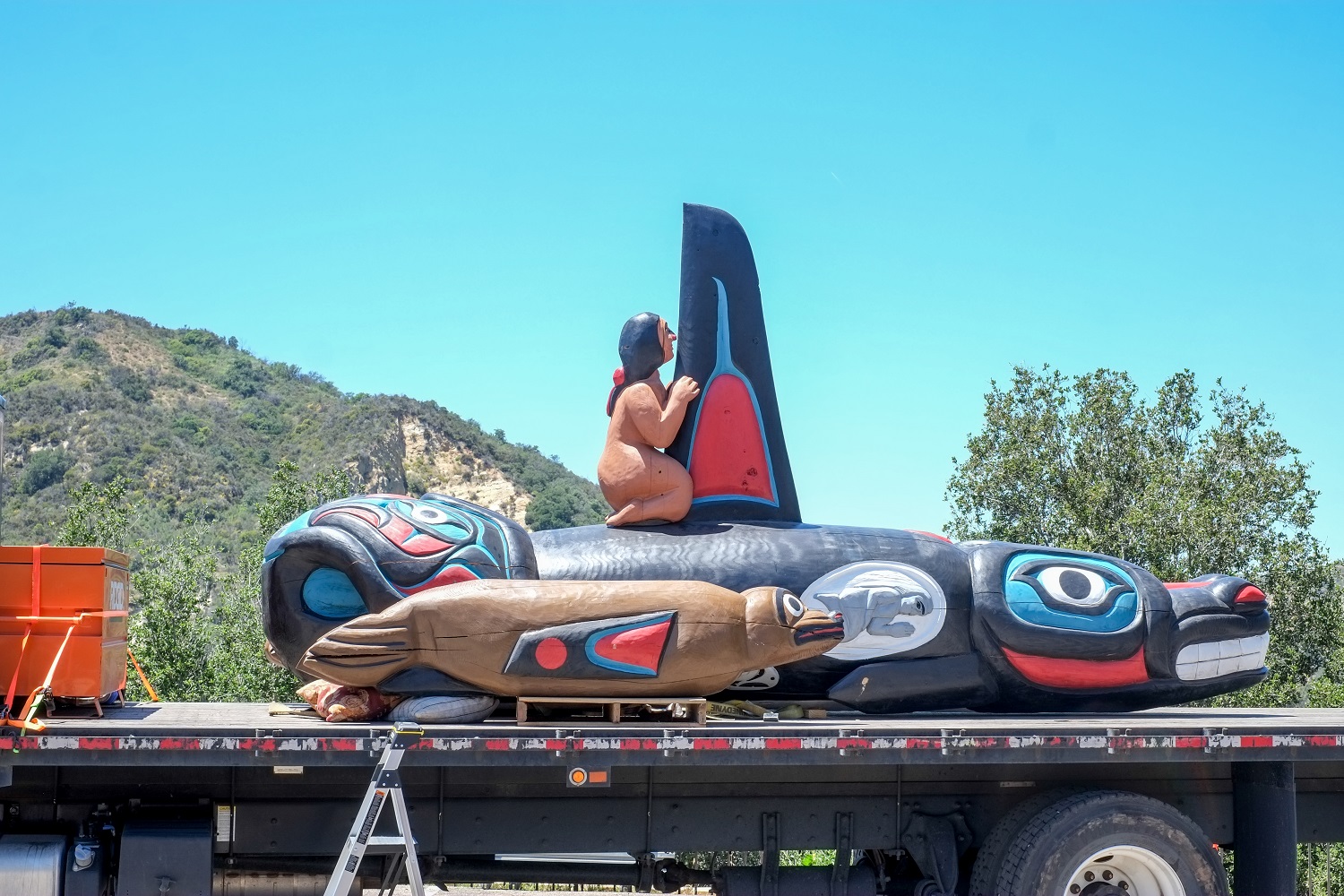 The 3,000-pound Whale Totem carved by Doug James, made a stopover in Topanga on its way to the Lummi Nation in Washington state. Photos by Deja Cross 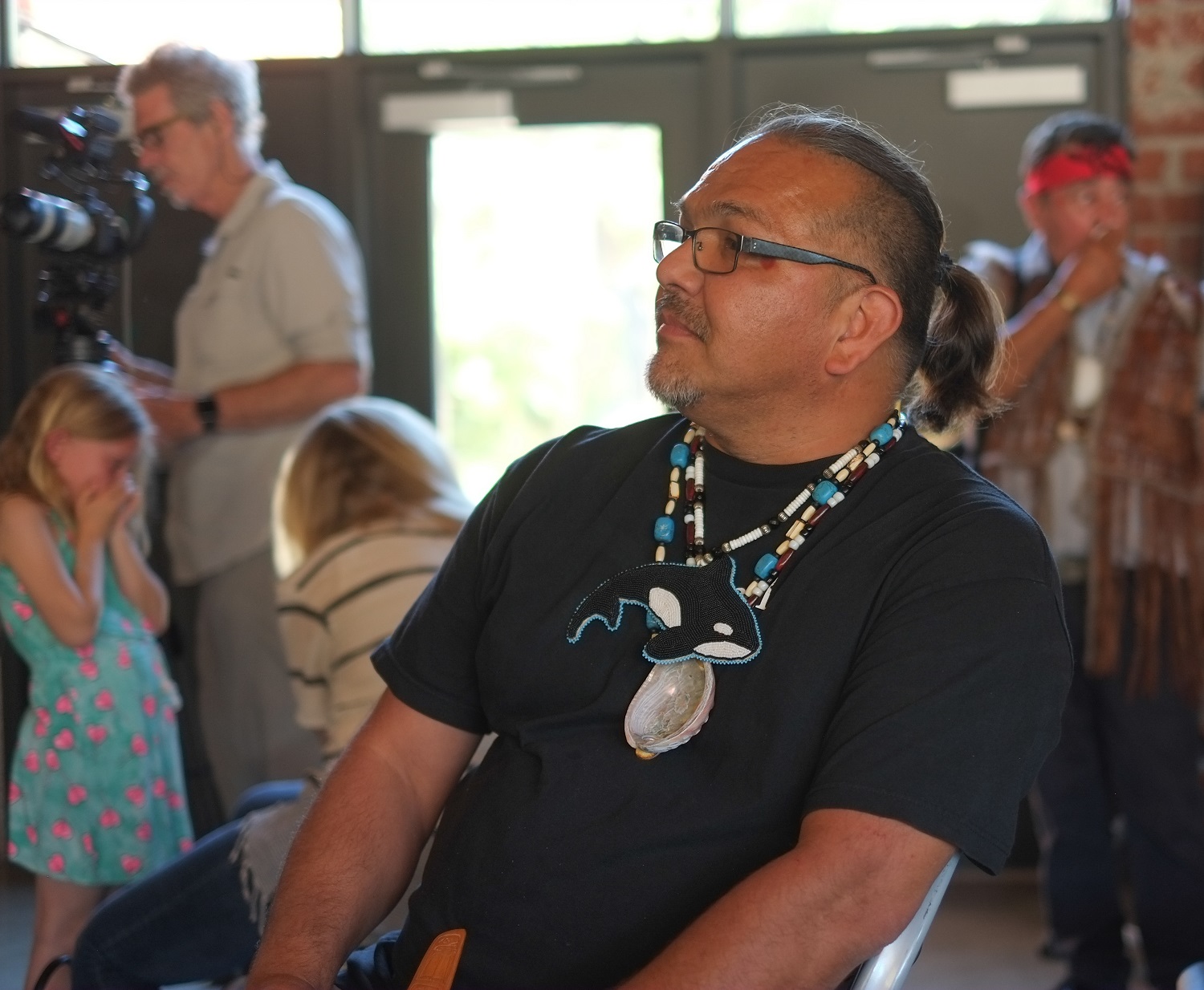 Freddie Lane, Business Councilman and Medicine Man for the Lummi Nation, wears a beaded whale necklace, a symbol of his connection to Tokitae. 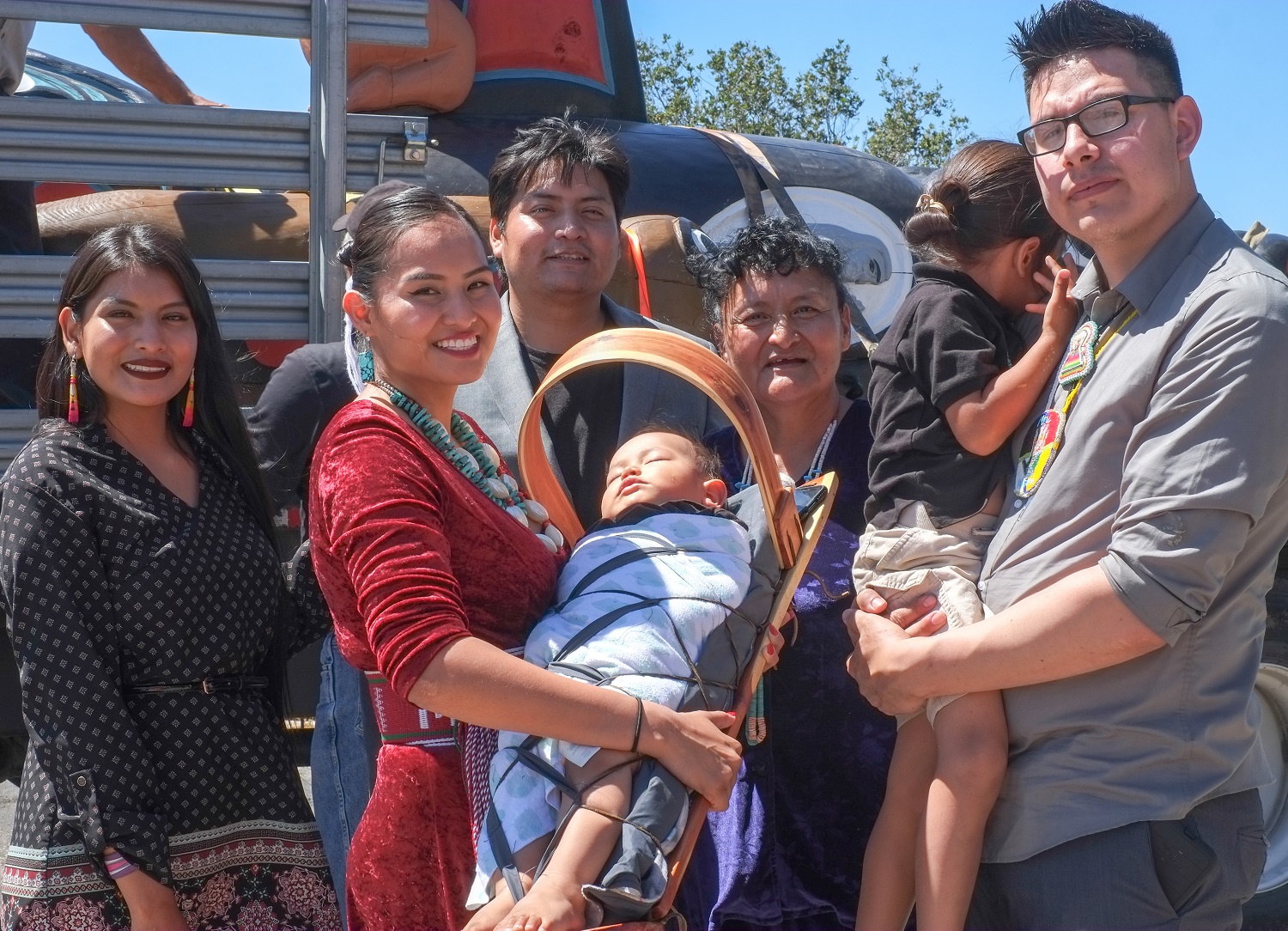 Joni Siegel, founder of the Foundation for Indigenous Medicine, inherited a traditional Native American recipe for a healing salve from her family. In 1995, she decided to manufacture and sell the salve. As her business grew, so did her vision and she reached out to 21st century Native American traditional medicine healers to learn their medicine ways. In June, she invited representatives from two tribes—the Lummi Nation  from Washington state, and the Diné (Navajo) Nation from Arizona—to meet in Topanga to share their mission and their healing wisdom. The Lummi brought with them a 3,000-pound whale totem on its journey to Seattle, Washington; Diné Medicine Man Emerson Gorman, brought his family and a healing message.

When Joni Siegel began her Puremedy Healing Salve product line, she knew there was more to explore about the Native American traditional medicine recipe she grew up with. That part of her family story goes back to the 19th century.

“Our salve was originally crafted by a Medicine Man in Quebec over 160 years ago. In 1865, when he was a toddler, my great-great-grandfather, Joseph Piquette, suffered a third degree burn on top of his foot which quickly became infected. His entire foot began to turn black as gangrene set in. The doctor wanted to amputate his leg at the hip, but Joseph’s father instead sought the advice of a Medicine Man. A healing salve was crafted which ultimately saved his leg from amputation, and healed the infection and burn without even leaving a scar.

“My earliest childhood memories include our spirited family salve-making days,” Siegel recalls. “Grandpa Pete, with all of his passion, taught us exactly, and specifically, how to make the salve. He shared story after story about how the salve healed everything from diabetic foot sores to burns, skin infections, and much more.”

In 1983, Siegel’s  father, Wayne Siegel, helped establish the first school on the Lummi reservation located in Washington state, that became the Northwest Indian College in 1989.

Siegel is also distantly related, on her mother’s side, to Kit Carson, who led the forced removal of 8,500 Navajo men, women, and children from their lands in Arizona and New Mexico in 1864.

At the June 8 gathering, Siegel’s mentor, Medicine Man Emerson Gorman of the Diné Nation, came from Arizona with his children and grandchildren to share their stories at the Topanga Community House. He and his wife, Beverly, raised eight children on a reservation with no electricity and no running water. All of the children have graduated college, gone on to distinguished careers, and are dedicated to carrying forward the message of traditional medicine.

“My father, uncle, grandfather all knew traditional medicine,” Gorman said, addressing an attentive crowd. “When I was five, my dad said, ‘I want you to learn the medicine ways, to be healing.’ Now I’m on to 70 years old. I specialize in all kinds of healing: bones, nerves, cancer, diabetes. Our indigenous medicine came from the animal world. They were the first medicine people. We revere them. That’s how we come to be medicine people. The totem with us today is part of them.

“It’s a long story. I come from the Long Walk, my great-grandma was a survivor, my uncle was a code talker, and that’s how I grew up in the medicine world. Save the world somehow so we can enjoy it on this earth,” he said. “The indigenous medicine has a lot to do with it.”

Gorman’s daughter, Naiyahnikai, spoke a prayer: “Go forth together from this day in a good way. Bless their children in the knowledge of the land. Get to know each other. Our knowledge will grow and future generations will look back at this day when we planted the seed.” She concluded with a favorite quote from Octavia Butler: “All that we change we touch, all that we touch we change, all that we change changes you.”

Children played while more prayers were said and blessings bestowed. Everyone gave thanks that the children, sometimes noisy, were included.

The 3,000-pound whale totem, sitting on a flatbed truck in the parking lot, drew everyone to it during the day. People gathered close to touch it and hear blessings for its journey and mission to “rescue” Tokitae, the 40-year-old Orca, who was captured in the San Juan Islands to perform at the Miami Seaquarium.

“I am connected with the totem pole journey,” Gorman told the Messenger Mountain News. He explained that he plans to accompany the healers from the Lummi Nation on the return journey to Washington with the totem.

“I’ve been on the journey with Jewell James, my partner Kurt Russo, Doug James (the totem carver), and Freddie Lane; they’re the ones taking care of the totem pole,” Gorman said. “We all met up here. Then we’ll take it to Washington.”

When the totem arrives in Washington, a “Canoe Paddle” will bring tribes from Canada and surrounding northwestern states for a cultural exchange of ideas on how to proceed with building the 70-acre transitional facility for Tokitae and other whales to return to and eventually join their pod.

Siegel has established the Foundation for Indigenous Medicine whose goal is to support and unite medicine people around the globe and provide resources for the Lummi Nation to build healing and education centers on their land.n

For more information and to contact Joni Siegel: jsiegel@puremedy.com; and on Facebook.com/foundationforindigenousmedicine.

By the early 1860s, Americans of European descent began settling in and around Navajo lands, leading to conflict between Navajo people on one side and settlers and the U.S. Army on the other. In response to the fighting, the Army created a plan to move all Navajos from their homeland.

The forced removal of the Navajo, which began in January 1864 and lasted two months, came to be known as the “Long Walk.” According to historic accounts, more than 8,500 men, women, and children were forced to leave their homes in northeastern Arizona and northwestern New Mexico. In the dead of winter, they made the 300-plus-mile trek to a desolate internment camp along the Pecos River in eastern New Mexico called the Bosque Redondo Reservation, where the military maintained an outpost, Fort Sumner. Along the way, approximately 200 Navajos died of starvation and exposure to the elements.

Four years later, having endured overcrowded and miserable conditions at Bosque Redondo, the Navajo signed the historic U.S.-Navajo Treaty of 1868. The treaty allowed the Navajo to return to only a small portion of their original homeland in Arizona and New Mexico. The U.S. government promised basic services in exchange for peace, and the Navajo began the long walk home on June 18, 1868.

Get Ready for Good Times