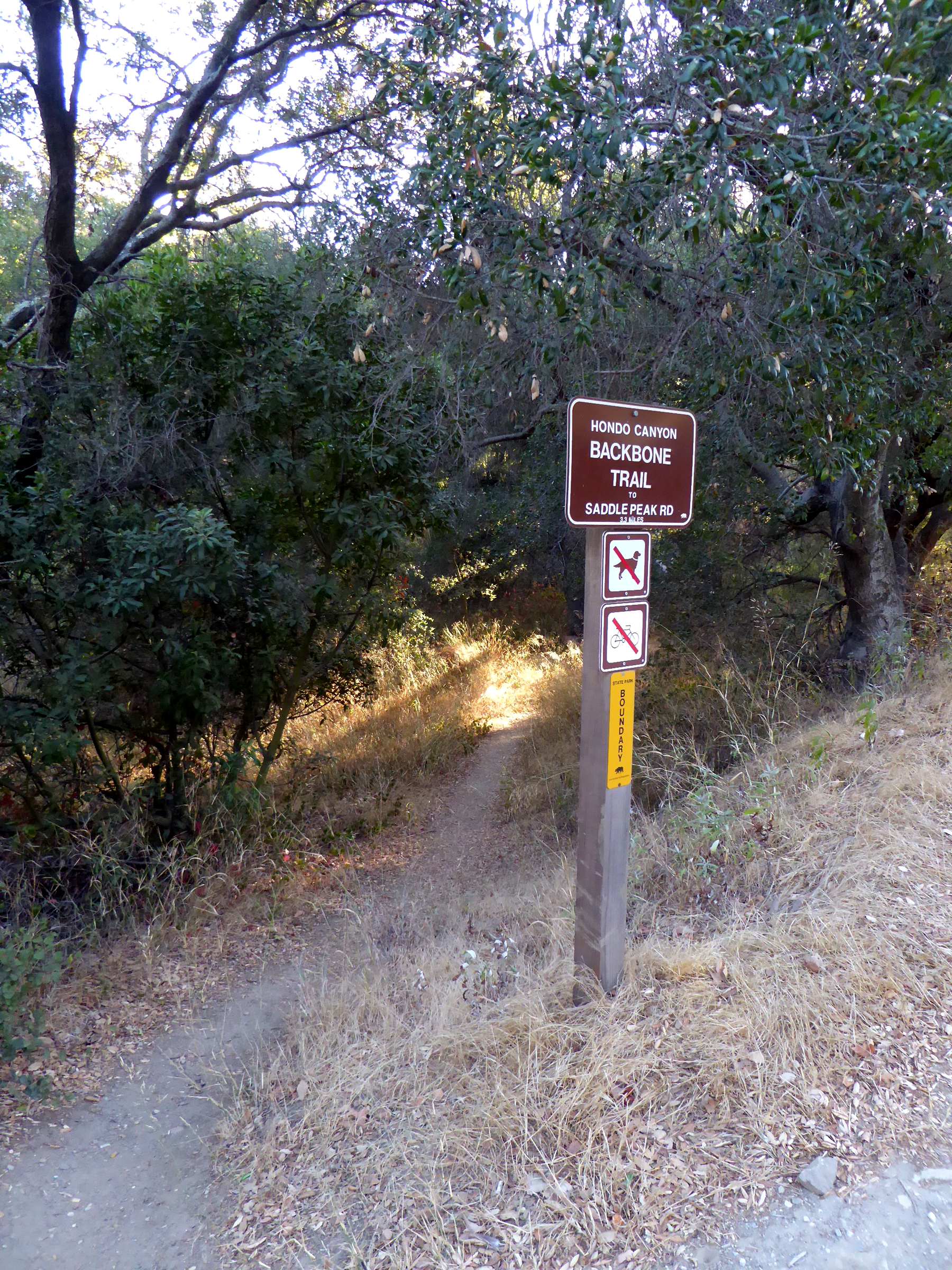 It’s easy to miss the Backbone Trailhead on Old Topanga Canyon, but that one small sign for the Hondo Canyon Trail promises a dramatic creek crossing, meadows, woodlands, and towering, 500-foot-high cliffs. Photo by Suzanne Guldimann 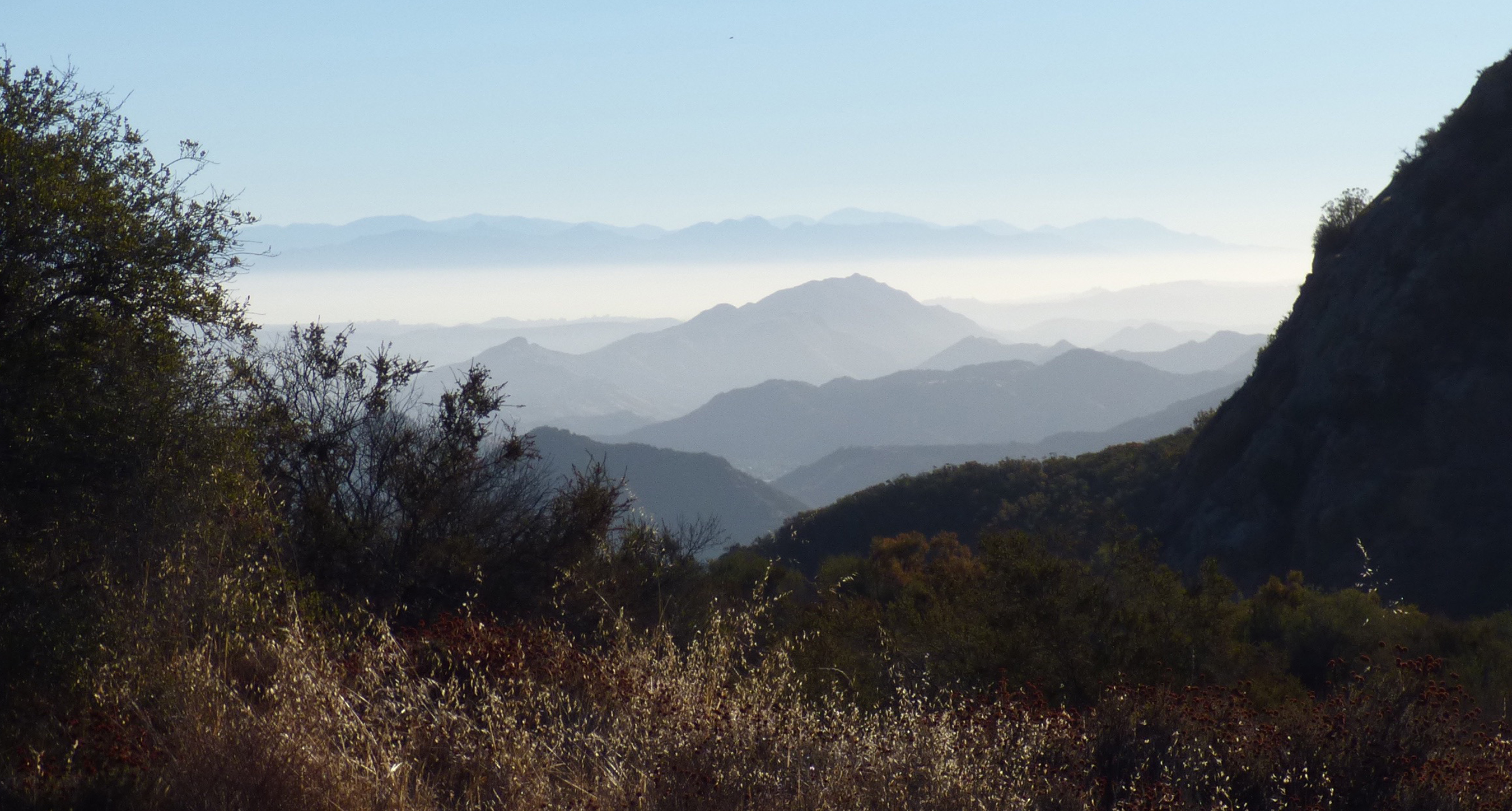 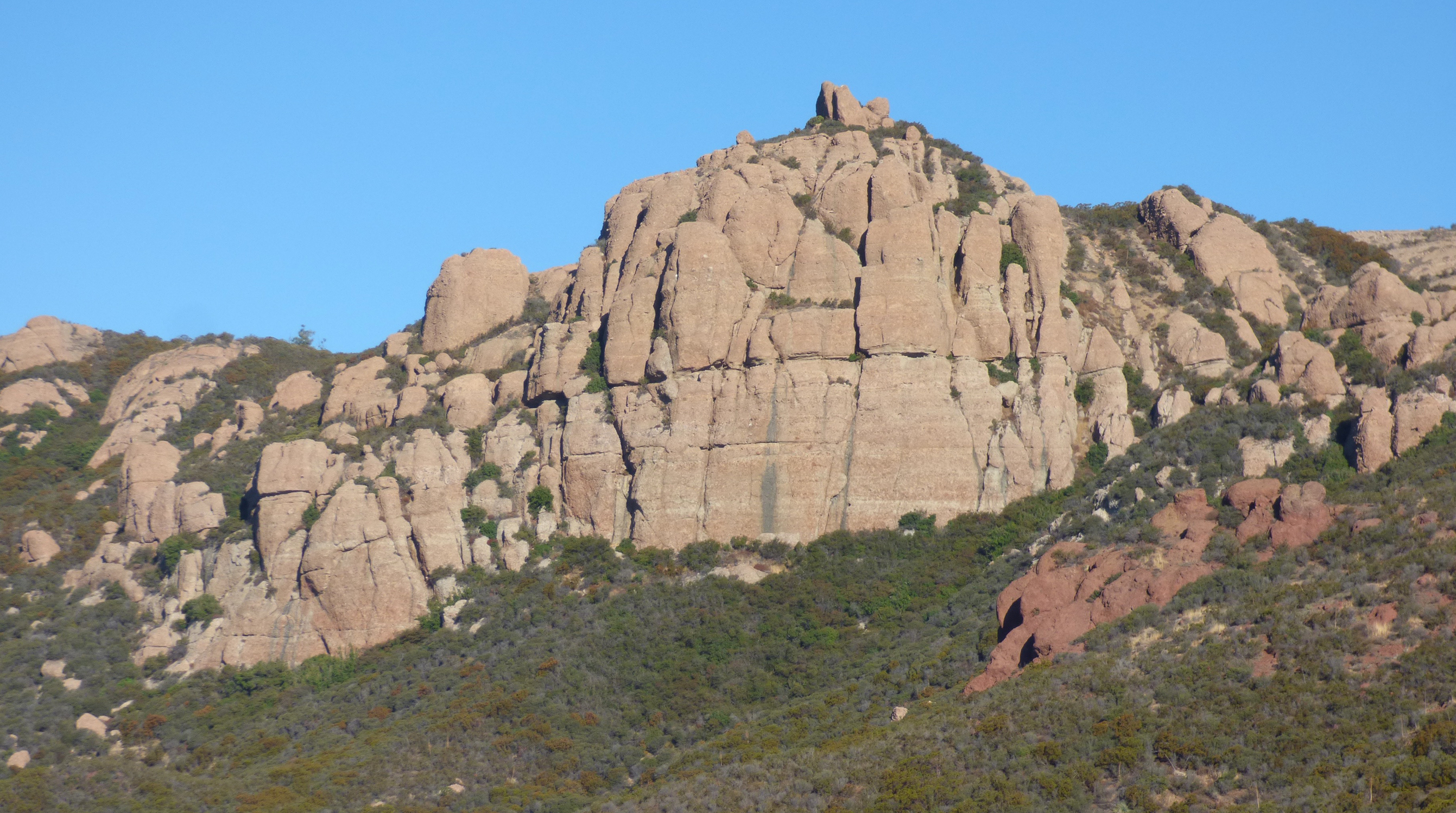 The western Santa Monica mountains are arguably the most rugged and wild, with massive volcanic cliffs and the highest peak in the range—3,111-foot-tall Sandstone Peak. Photo by Suzanne Guldimann

The weirdly weathered sandstone formations on this trail, along with a now-closed and off limits ”cave,” have made this stretch of the Backbone Trail in Corral Canyon a little too popular. The best time to visit is on a weekday or early in the morning on a weekend. Photo by Suzanne Guldimann 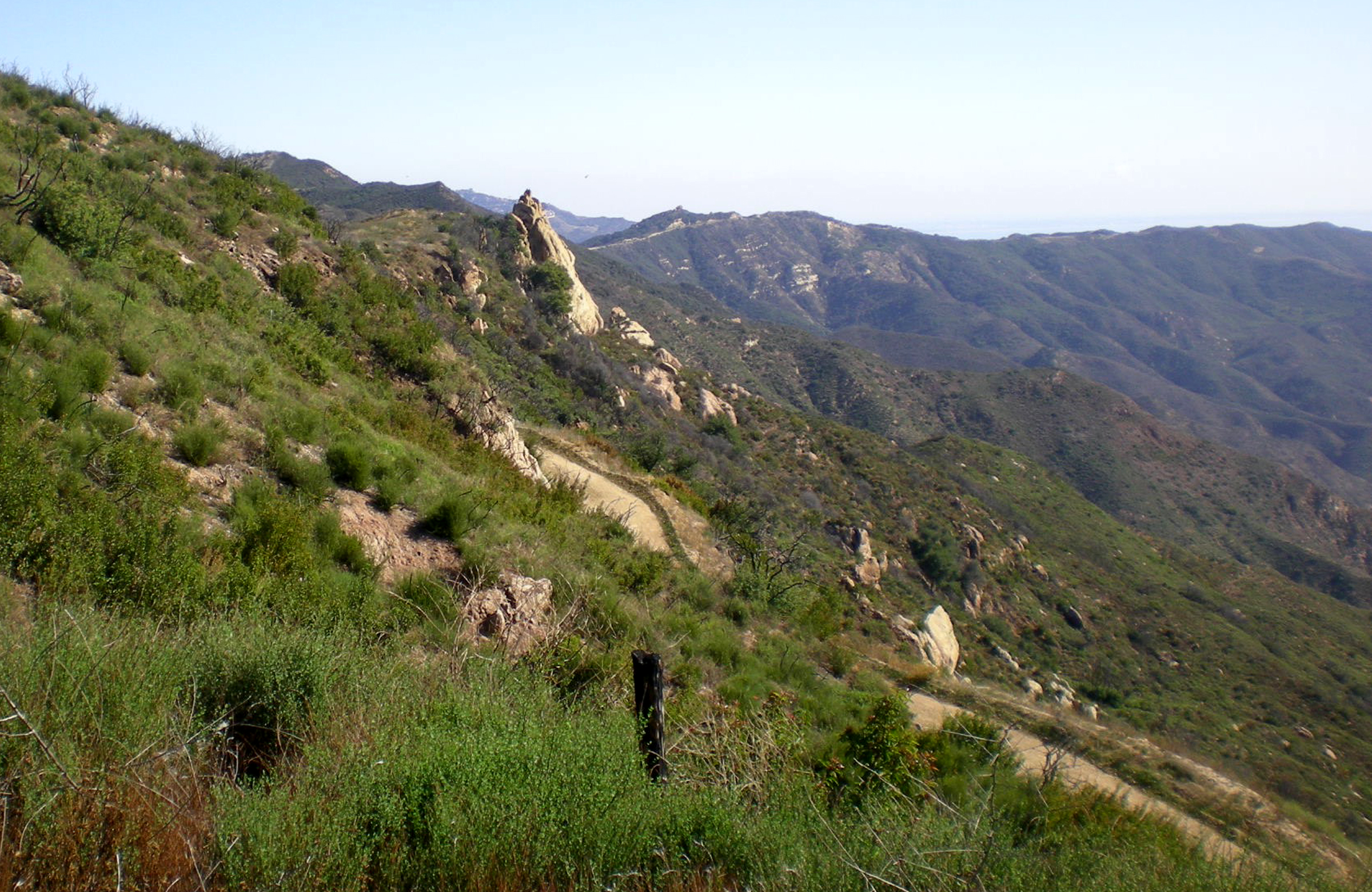 Hondo Canyon Trail winds through woods and meadows before ascending by a series of switchbacks up the canyon wall to Saddle Peak Road. Photo by Suzanne Guldimann

Guidebook reveals the Backbone Trail has something for everyone. In fact, you may have already hiked some of it without even knowing you did.

Husband and wife hiking and writing duo Doug and Caroline Chamberlin are the authors of The Complete Hikers Guide to the Backbone Trail, the first guidebook for the 69-mile long trail through the Santa Monica Mountains.

The Chamberlins have walked the entire trail multiple times, but they describe themselves as “typical SoCal hikers,”  or in other words, ordinary mortals and not Olympic athletes. That’s encouraging and inspiring for anyone who would like to try the trail, but who needs a little guidance on how to start. The authors of the guide were at the National Park Service Visitor Center at King Gillette Ranch on September 8, to offer exactly that kind of encouragement, and to share some of their experiences on the trail.

“We enjoy hiking together, the solitude of nature,” Caroline said, explaining how they became Backbone Trail experts. Their first Backbone Trail walk began with a New Year’s resolution in 2010 to get in shape.

“We kept getting lost,” Doug recalled.

“Doug kept complaining someone should write a book,” Caroline added.

That first walk became the start of an amazing adventure. “Not a huge adventure, full of peril and exotic wonder, but a pocket-sized adventure,” Caroline said. “One you can practically have in your own backyard and in your spare time.”

The Chamberlins celebrated some of the amazing aspects of the trail at the talk. They described towering rock formations, pristine oak and California bay laurel woodlands, and mountaintop views of Los Angeles and the Pacific Ocean.

“You can look from the  trail over 1,000 square miles of ocean—literally,” Doug explained.

For their book, the Chamberlins break the trail into 20 segments, using practical divisions—like the places where the trail crosses major roads—as boundaries. The trails are graded on difficulty. Each segment includes information on the amount of shade, elevation loss and gain, trail access, and amenities like restrooms and drinking water. They also catalogue the types of features, including ocean views, oak woodlands, meadows, and provide information on geology, native plants and animals, and local history.

The trail itself has a history as convoluted as any of its segments. The concept for the Backbone Trail was approved by the California legislature in 1974, four years before the SMMNRA was created by an Act of Congress. By 1983, the first ten miles were built. The last two parcels were acquired in 2016, finally creating a contiguous, nearly 70-mile-long trail.

The Backbone Trail crosses a patchwork of federal, state and local parkland. Dogs on leash are permitted on National Park Service, some Santa Monica Mountains Conservancy (SMMC), and Mountains Recreation and Conservation Authority (MRCA) segments. but not on State Parks property. Equestrians can travel most of the trail—some segments are too steep or narrow. Mountain bikes can traverse much of the trail, but have more limitations than horses.

The Chamberlins recommend tackling the trail as a series of day hikes, and their favorite approach is traveling east to west.

“Mountains with an east-west orientation are very rare,” Doug said, pointing out that hikers on the Backbone Trail can keep the sun behind them on an east-west walk, something that’s rare for mountain trails. The terrain also becomes more scenic and wild on the western end of the mountains, but also more challenging to hike in some areas.

Some segments of the Backbone Trail require a full day, others are short. Most have elevation loss or gain, but a few are surprisingly gentle. The book offers shorter alternatives for less ambitious hikers, including a quick but dramatic four-mile, out-and-back hike up 3,111-foot-high Sandstone Peak, the highest mountain in the range, and and some longer options, with side-trips to points of interest.

“Henry Ridge is the shortest segment,” Doug explained. This stretch of the Backbone Trail goes from Old Topanga Canyon, behind Topanga Elementary School and down to Topanga Canyon Blvd., connecting the longer Hondo Canyon and Fossil Ridge sections of the trail with Dead Horse Trail in the Trippet Ranch area of Topanga State Park.

There are also options for “through hikers” who want to power through the trail in one piece, although the Chamberlins point out that there still isn’t enough infrastructure to enable Backbone hikers to camp in all of the necessary park locations to make the journey seamless.

Topanga residents and visitors may have walked this part of the Backbone Trail many times without realizing it. Anyone who has hiked Musch Trail and the Eagle Rock Fire Road has had a Backbone Trail adventure.

The walk from Will Rogers State Park trailhead on Sunset Boulevard to “the Hub,” an intersection of major trails and fire roads in Topanga State Park, is described in the Chamberlins’ book as “hard.” It’s also one of the longer hikes, at nearly 11 miles. The authors recommend hiking it one way with a car shuttle by leaving a vehicle for the return trip at the Marvin Braude Mulholland Gateway Park trailhead at the end of Reseda Boulevard and starting at the Hub.

The marathon leg of the journey is near the far western end of the trail: the hike from Triunfo Pass to Big Sycamore Canyon is 13.46 miles one way. The Chamberlins describe it as the “grandaddy” of all the Backbone segments.

The authors pointed out that there is no law that says the trail must be tackled in a particular order. Hikers can always choose shorter or less difficult segments and build up to longer walks, or break the longer segments into shorter walks.

The duo recommends hiking in winter and spring when the weather is cooler and the landscape is greener.  They suggest wearing hiking boots and hiking socks—Caroline carries an extra pair of socks for emergencies and to prevent blisters. They also recommend bringing plenty of water, sunscreen, sunglasses, a hat, map, compass, extra cell phone batteries, and a hand-cranked flashlight.

Doug explained that “dehydration and sun exposure are the biggest trail hazards. The list also includes advice from their own experiences of sprained ankles, poison oak, and getting lost.

The Chamberlins book promises something for everyone—old and young, fit or not so fit—along the Backbone Trail.

“On it you’ll find peace, inspiration, health, and adventure,” the authors state in the introduction. That’s not an exaggeration.

“Hiking is good for the heart and soul,” Doug Chamberlin told the Messenger Mountain News.

The Complete Hikers Guide to the Backbone Trail, by Doug and Caroline Chamberlin, is available online, or at the SMMNRA Visitor Center at King Gillette Ranch.

For more information on the Backbone Trail via the National Park Service website, including how to enter the NPS Backbone Trail hiking lottery, for a chance to walk the whole trail accompanied by docents, rangers and nature experts, visit https://www.nps.gov/samo/planyourvisit/backbonetrail.htm

Is Your Garden a Poison Paradise?