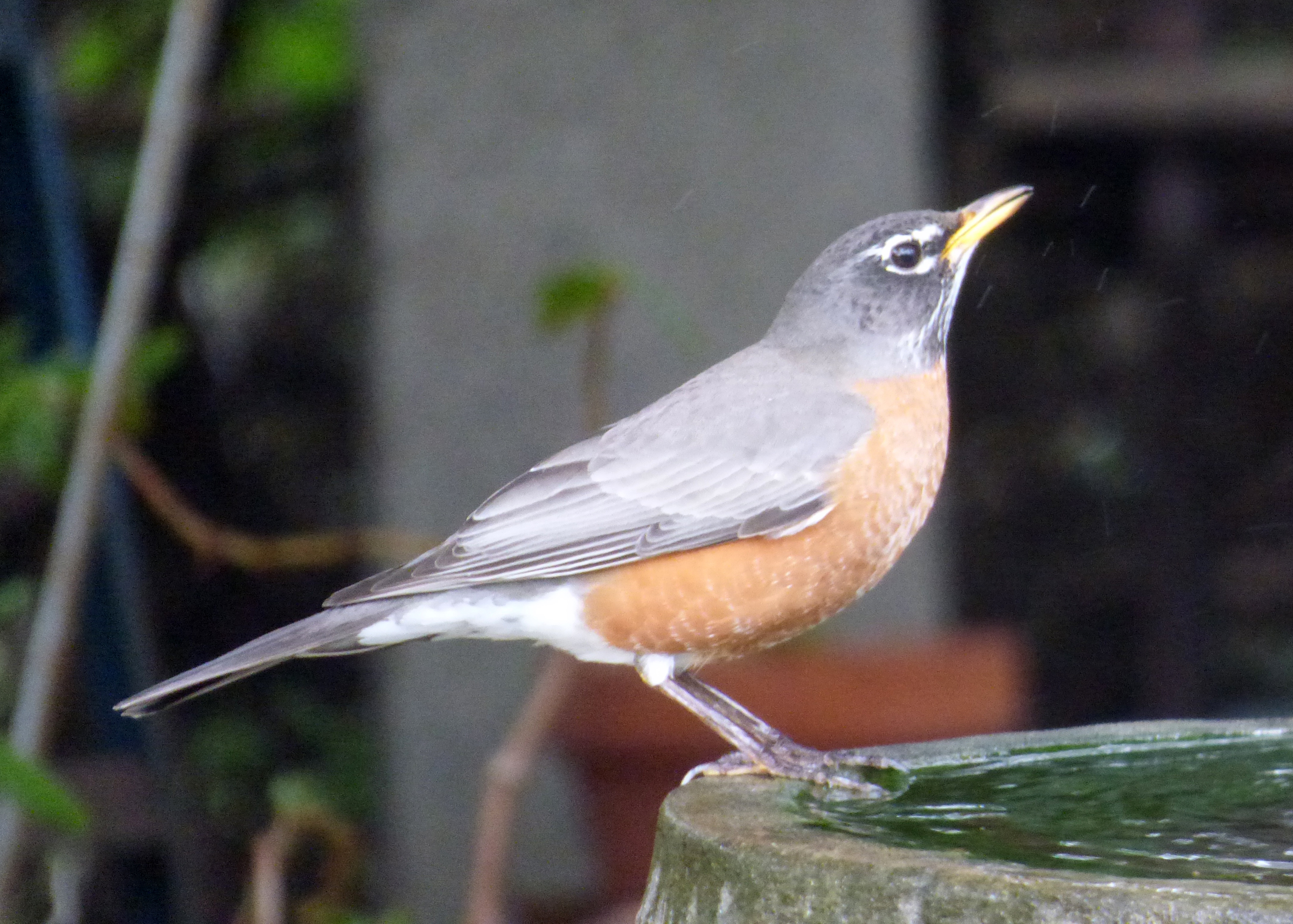 An American robin enjoying a bath. Photos courtesy of Suzanne Guldimann and her backyard residents 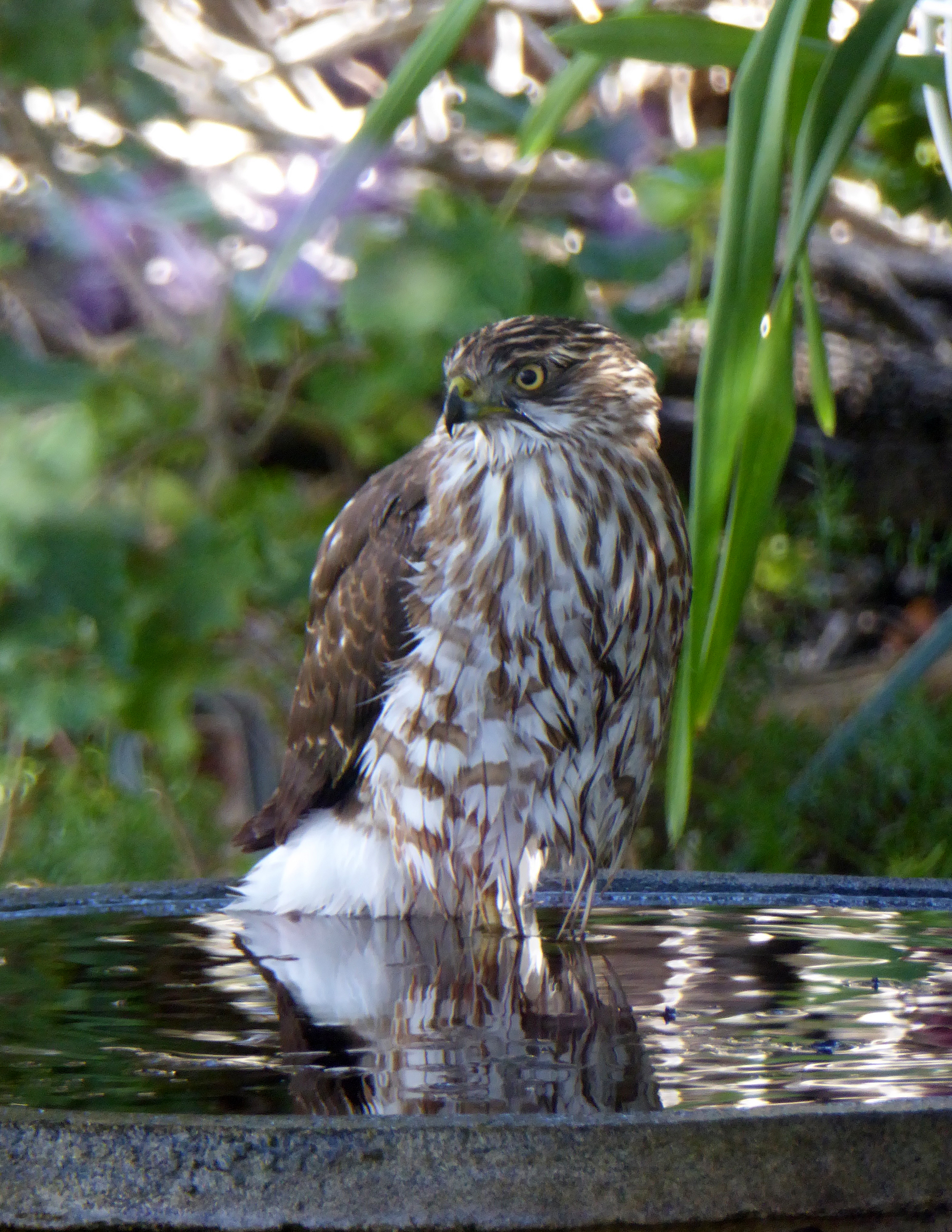 Sometimes a birdbath attracts bigger birds like this hawk, much to the consternation of the songbirds, and in our case, our dog, who does not approve. 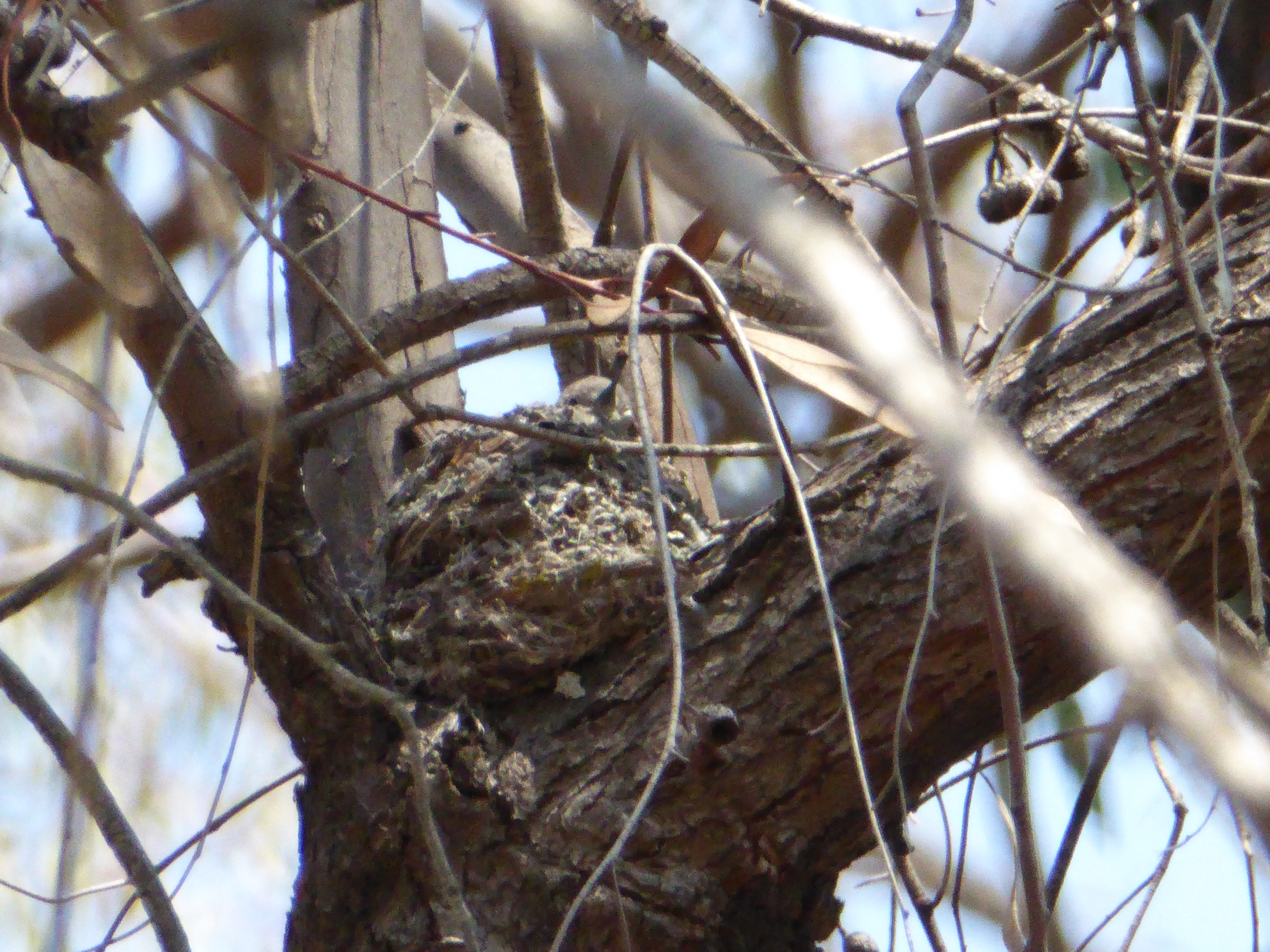 This artfully camouflaged nest is designed to protect its architect from predators, but it leaves the bird vulnerable to tree trimmers, who may also fail to observe it. 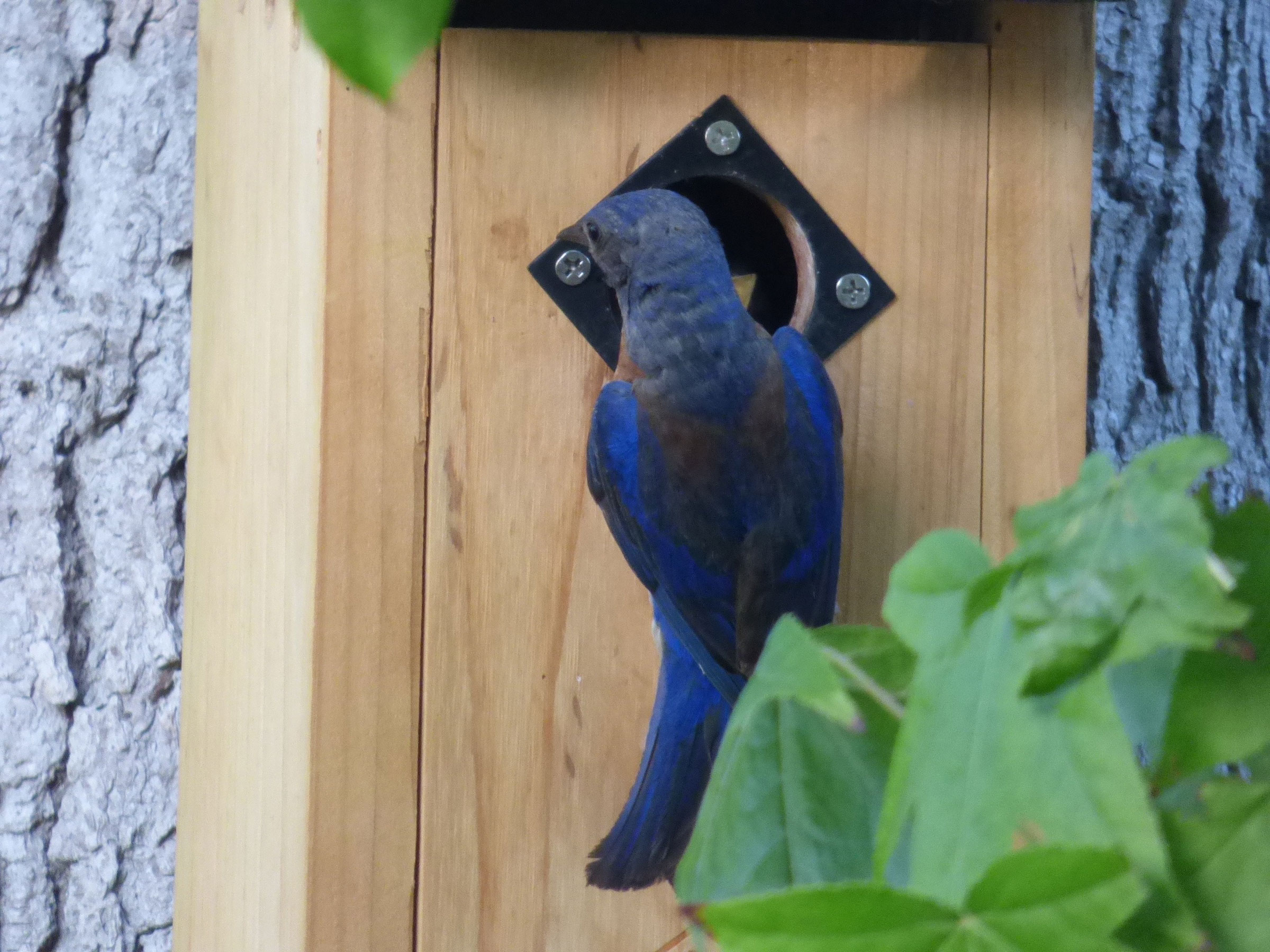 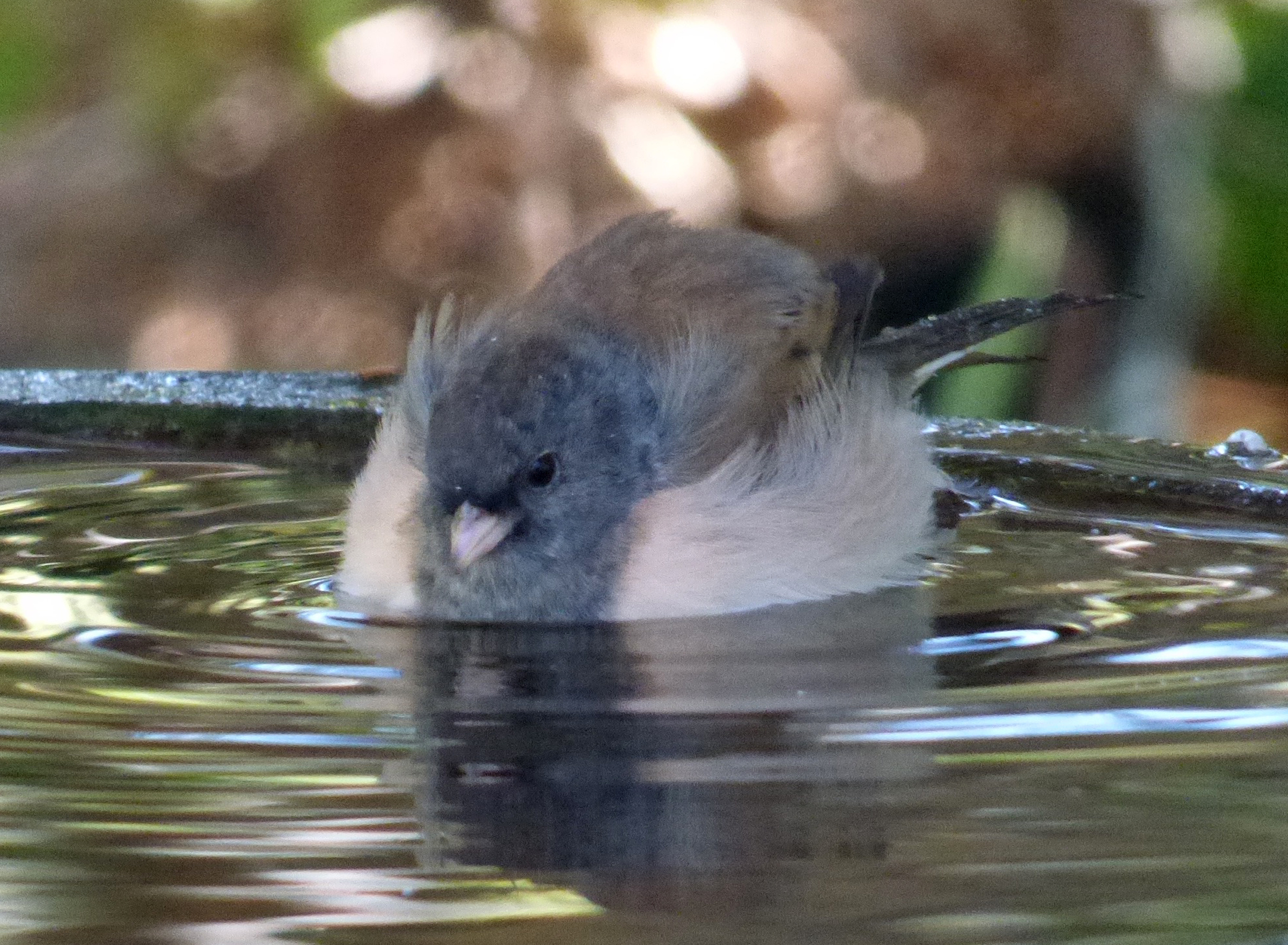 Bird nesting season officially began March. Time to think of your back yard as a bird sanctuary. The National Wildlife Federation can help you plan that out.

One robin may not make a summer, but in the Santa Monica Mountains it’s a sure thing that spring nesting season has arrived.

Robins often appear in large numbers in midwinter, sometimes as early as late December, and while many robins pass through on their way north, some nest in the area. They announced their arrival last week by filling canyon gardens with their distinctive laughing song.

According to the California Department of Fish and Wildlife, bird nesting season officially begins March 1 and runs through August 31. Birds, however, don’t always stick to the official government schedule. Some migratory species have biological clocks set to the lengthening of the day as spring approaches. Others, like the robins, migrate in response to food rather than temperature or daylight, arriving—and nesting—earlier or later, depending on conditions. Many other bird species, such as hummingbirds, herons, egrets, hawks and owls, are year-round residents that may nest during the winter instead of in the spring.

The Audubon Society website states, “Los Angeles County has more than 350 species of birds that live, nest, or pass through during annual migrations; more than 120 species live here year-round.”Many of those species depend on back yards for survival.

Although nesting is already underway, it’s not too late for property owners to lend birds a helping hand. Topanga recently became a National Wildlife Federation Certified Wildlife Friendly Community. Many residents have already committed to leaving or creating “wild” areas for bird habitat.

Providing water for wildlife is essential and a birdbath can be as simple as old frying pan or garbage can lid works as well as a ready-made item.

Water sources—Supplying a clean, dependable, year-round source of water is one of the most rewarding ways to help backyard birds. Most birds prefer a wide, shallow basin, according to the Cornell Bird Lab. Commercial birdbaths may need to be customized because they are often too deep or too slippery. Flat pebbles or gravel can be used to raise the level of a deeper vessel, or to provide a “shallow end” for wildlife in a garden water feature.

A “Lizard Ladder”—is helpful for preventing accidental wildlife drownings. A piece of bamboo or just a fallen branch from a tree placed at an angle in the water will ensure anything that falls in can get out again. It also offers birds additional perching options. Birdbaths don’t have to be fancy, so long as it is stable and won’t slide or tip. A tree stump or wooden post can be used for a support.

Protection from Predators–The Bird Lab recommends that birdbaths be located in a shady location that is screened from predators like hawks and high enough off the ground to protect the birds from cats. Placing the birdbath under a tree but away from brush is ideal. Regular draining and scrubbing can help prevent the spread of parasites or illness. Making sure the birdbath is near a garden hose makes it easier to keep up with routine cleaning and refilling.

Some bird species are attracted to dripping water—easy to supply by poking a small hole in a bucket or even a plastic water bottle and suspending it over the bird bath.

Bird Boxes—Building or buying a bird box is another way to help native birds. Fire clearance regulations and the human desire for tidiness have had a negative impact on birds that depend on dead, decaying and hollow trees. Native cavity nesters include Bewick’s wren, the oak titmouse and the Western bluebird. All three will readily take up residence in a bird box. Wrens aren’t fussy, and will nest in almost any birdhouse. Special boxes are available for bluebirds and are equally attractive to the titmouse. It’s important that the box is deep, the opening too small for predators and that there is no perch. Bluebirds and titmice don’t need one, predators do.

Location—This is just as important to birds as it is to human house hunters. A box in a tree that offers secure perching and vantage points, as well as afternoon shade to keep nestlings from overheating is ideal. It’s important that bird boxes aren’t too close together. The North American Bluebird Society recommends that bluebird boxes be placed at least 100 yards apart.

The most important thing mountain property owners can do to help protect nesting birds is to put tree trimming on hold until the fall. The Audubon Society recommends avoiding the nesting season entirely and only trimming trees between September and February. When that isn’t possible, it’s important to carefully inspect trees and brush for nests before beginning work. If an active nest is found, work must stop until the birds have fledged. Disturbing or destroying an active nest is against the law.

The Audubon Society describes birds “as a priceless part of America’s heritage…beautiful, economically important, and a bellwether of the health of our environment.”

For many mountain and canyon residents, birds are more than that: they are our neighbors, and a living symbol of hope and happiness.

Report nest disturbance, or inappropriate trimming in the coastal zone to the California Coastal Commission: (562) 590-5223.

Film Review: Get Out