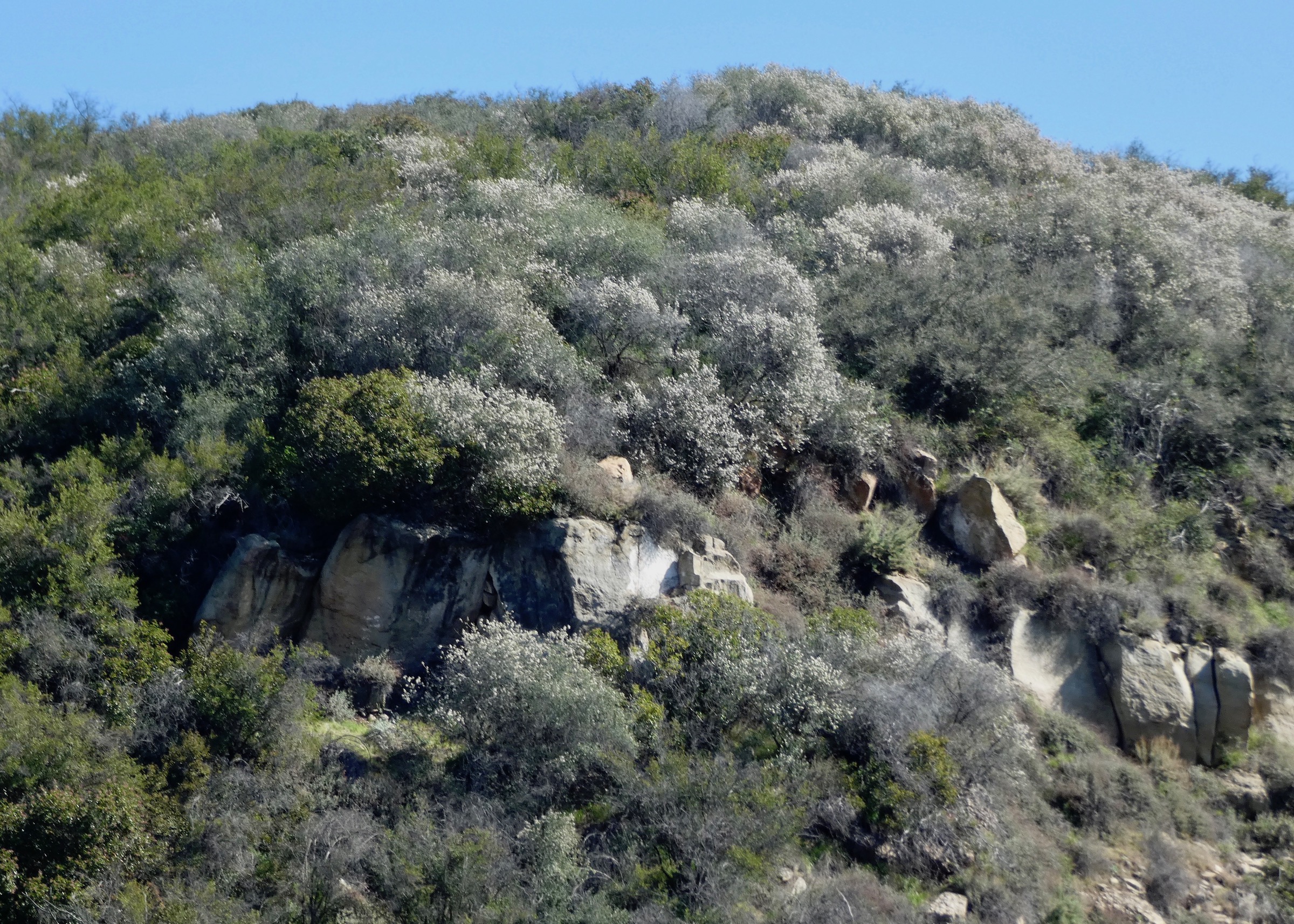 Big pod ceanothus covers the hillsides of Topanga with a dusting of snow-like flowers. This species of ceanothus is one of key chaparral plants on the ocean-facing side of the Santa Monica Mountains. Photos by Suzanne Guldimann 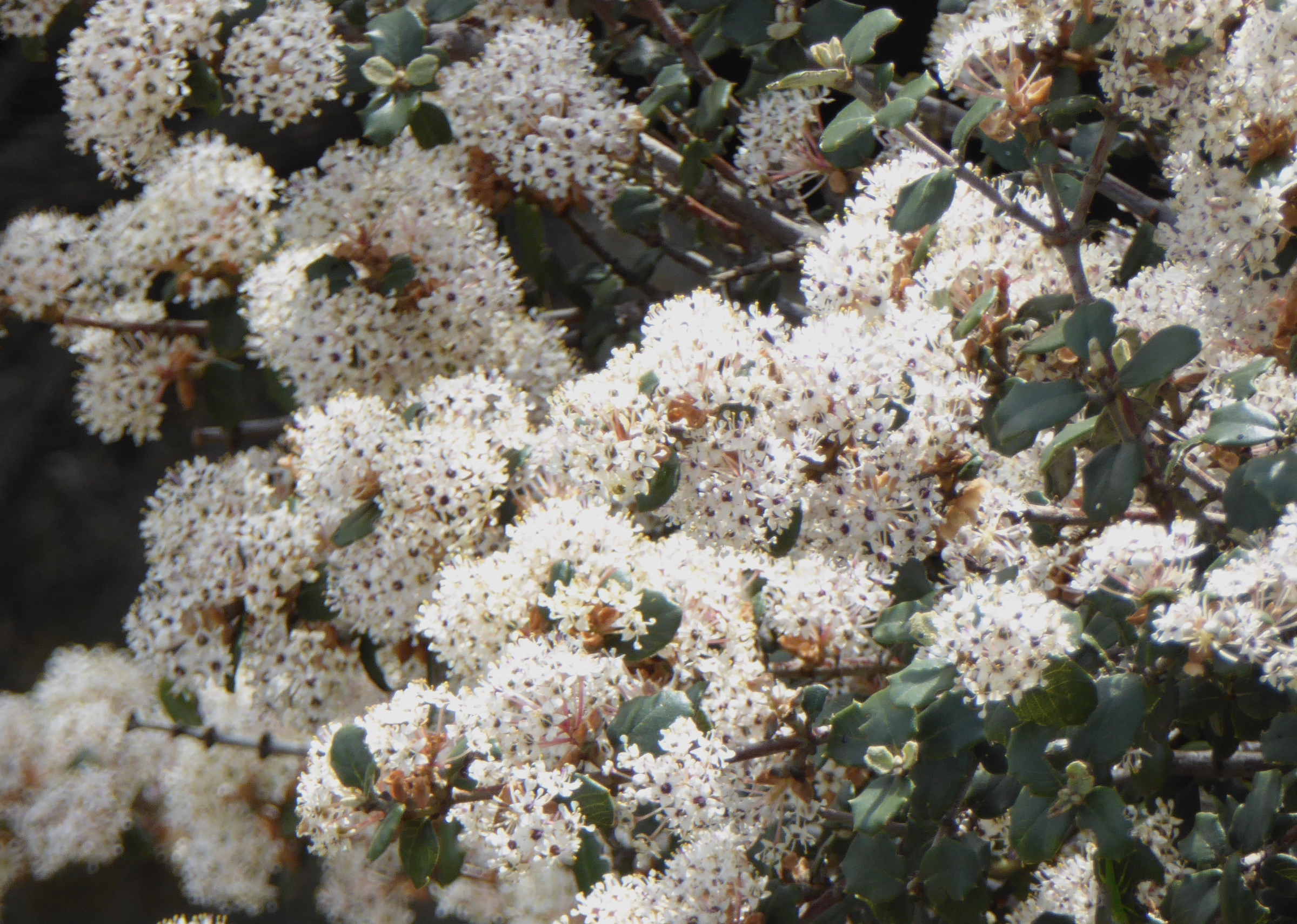 A closer look at big pod ceanothus. The flowers of this species of ceanothus are very similar to buckbrush, which is found on the inland side of the mountains, but the heart of the flowers is darker. 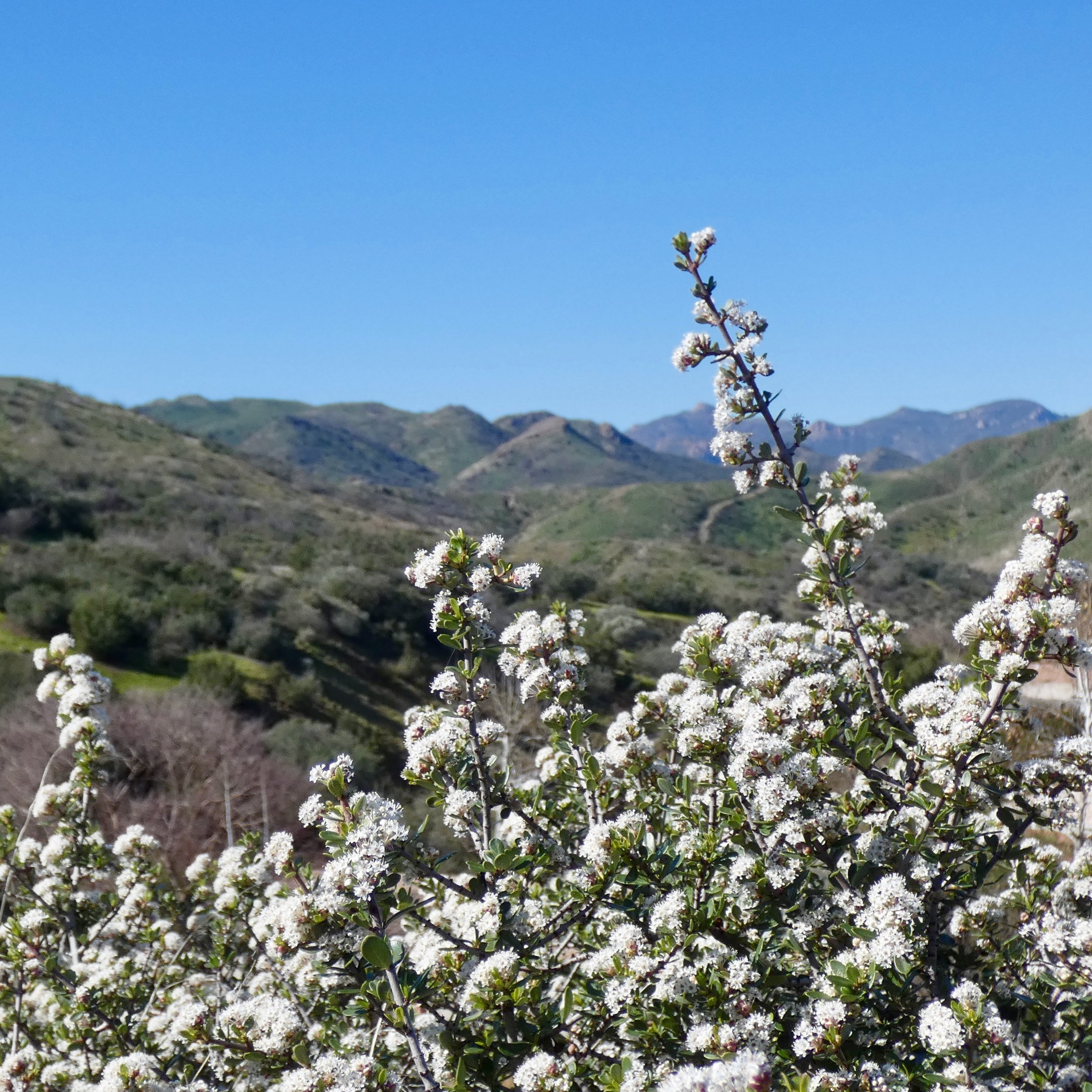 Buckbrush ceanothus thrives on the warmer, dryer inland side of the Santa Monica Mountains. 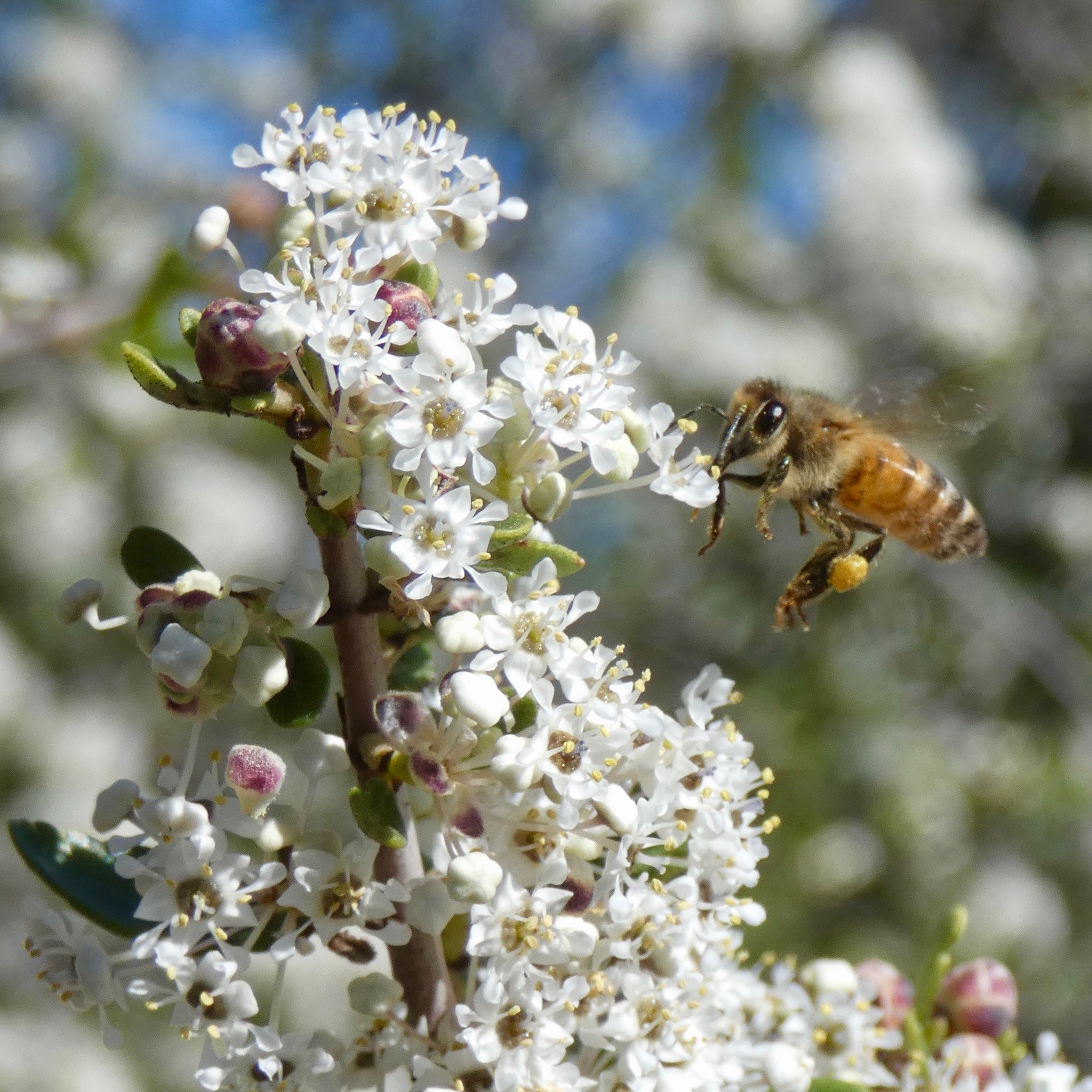 Buckbrush flowers are rich in nectar and attract a wide range of pollinators, like this honeybee.

While much of the nation is still covered in snow, the mountains around Topanga are dusted with the snow-like bloom of Ceanothus flowers. Vast areas of the chaparral that is dominated by this critically important family of shrubs burned in the Woolsey Fire, but Topanga’s ceanothus chaparral remained intact, a vital resource for native insects, birds, and animals.

Three species of ceanothus are among the dominant plants of the chaparral: Ceanothus cuneatus, C. megacarpus, and C. spinosus. They provide shelter, forage and nectar for a wide range of species. C. cuneatus, commonly called buckbrush, thrives away from the coast. C. megacarpus, or big pod ceanothus, is the white-blooming ceanothus of the coastal canyons. These two species are the snow-like ceanothus that are usually the first native wildflowers to bloom after the rains arrive.

Ceanothus spinosus, or greenbark ceanothus, also known as redheart, has more feathery flowers that range from snow white to pale blue and blooms a little later in the season. This ceanothus tends to grow larger than the other members of the family, sometimes becoming a small tree.

Greenbark ceanothus can survive wildfire and regrow from its roots. In the Woolsey fire burn zone, the green bark ceanothus put its energy into regenerating last year. Look for a spectacular bloom later this spring.

Buckbrush and big pod ceanothus cannot regrow, but they depend on fire to germinate their seeds. If conditions are right, the new generation of seedlings that have sprouted since the Woolsey Fire will replace their parent plants and recover the bare hillsides.

Topanga residents don’t have to wait; mature stands of both species of white-flowering ceanothus are just reaching peak bloom. Ceanothus is currently in bloom on almost every hillside and canyon wall in the Topanga.

A walk in Topanga State Park or Red Rock Canyon Park offers an up-close opportunity to enjoy the honey-like fragrance of these small but abundant flowers, and to listen to the music of the bees attracted to this rich source of nectar, but not for long. Ceanothus has a short blooming period: like winter snow, this flower vanishes once the warmer weather arrives.

The Constitution for Kids: Planting the Seeds of Democracy