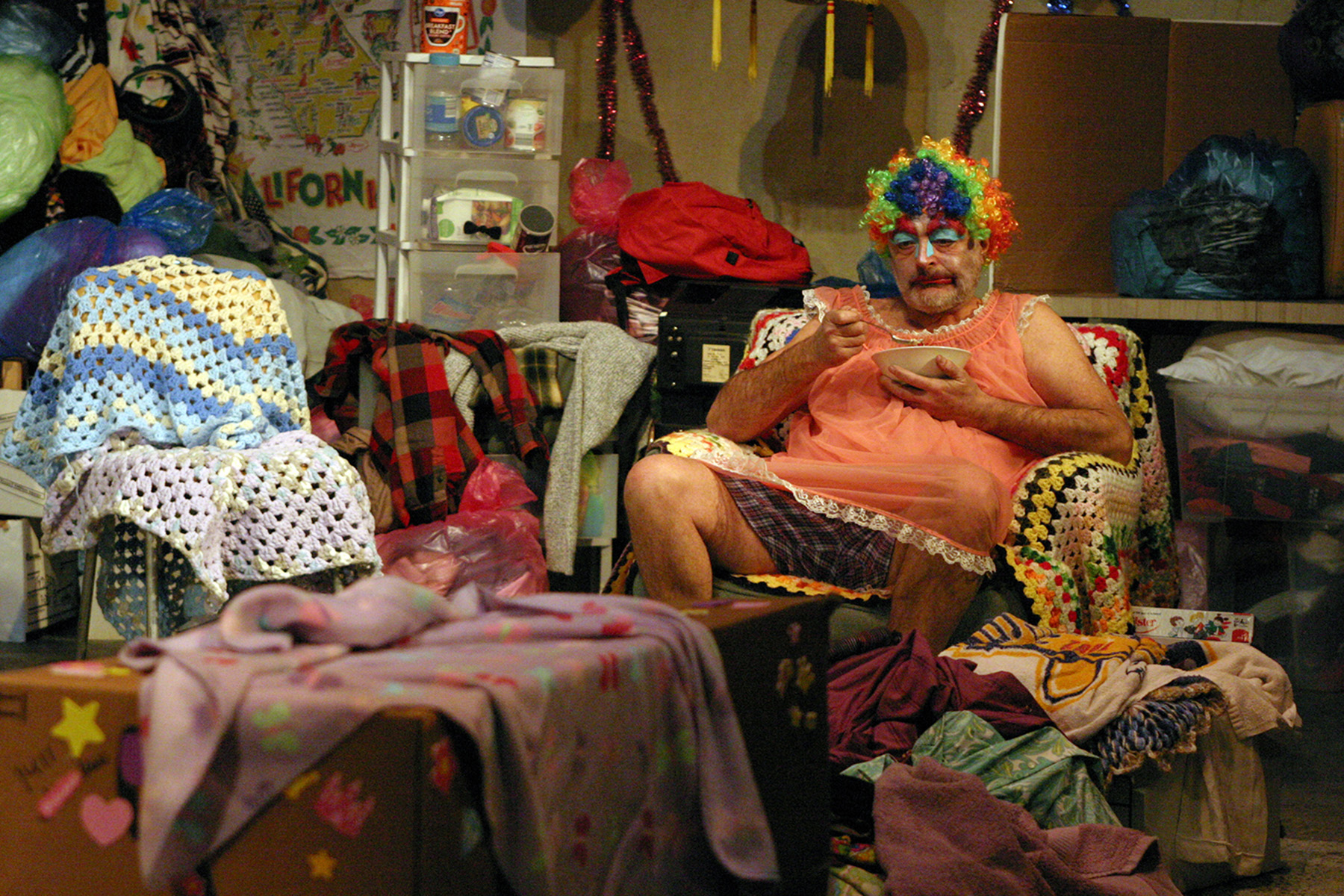 Ron Bottitta in the brilliant, hilarious, hearbreaking role of Arnold Connor in Hir. 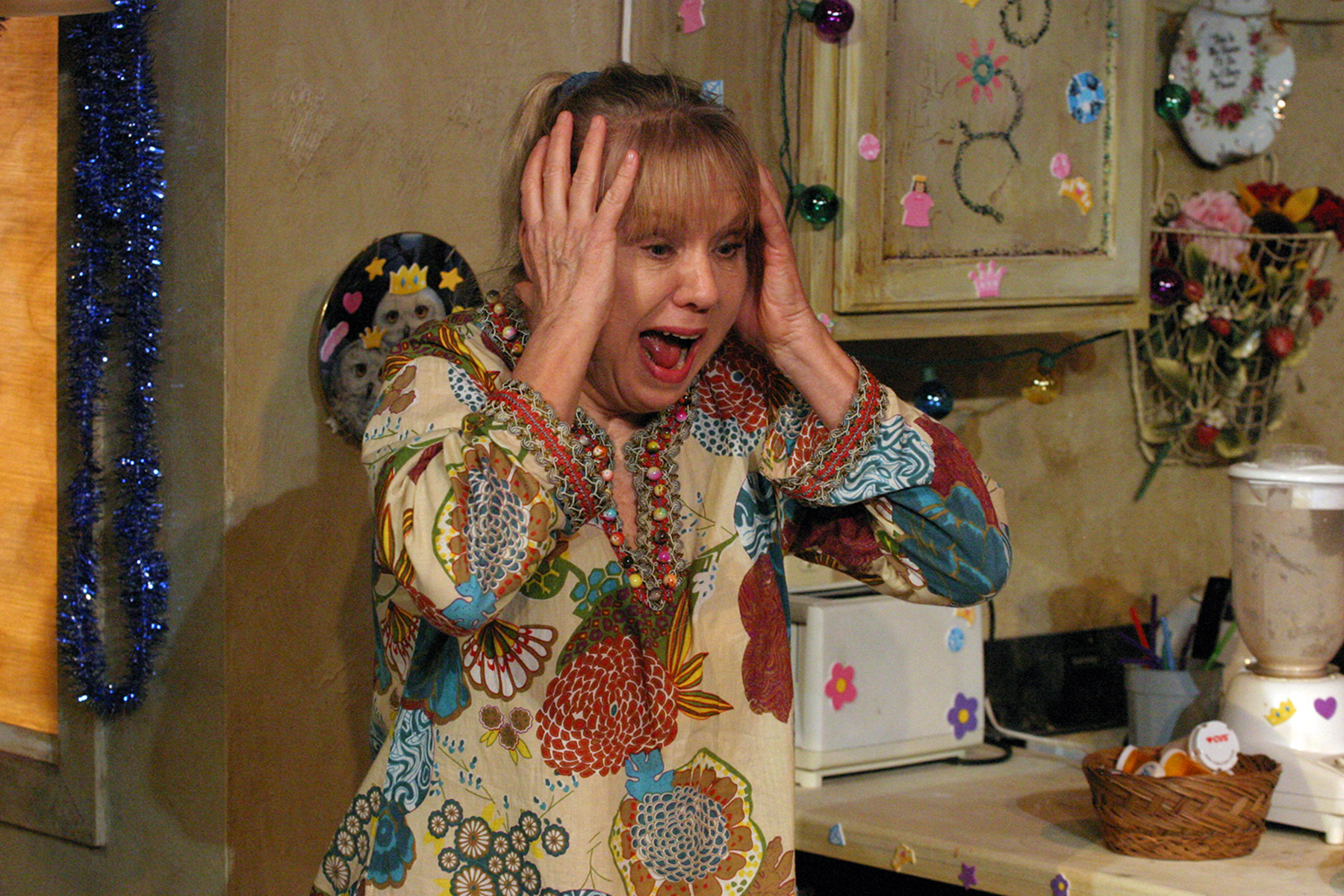 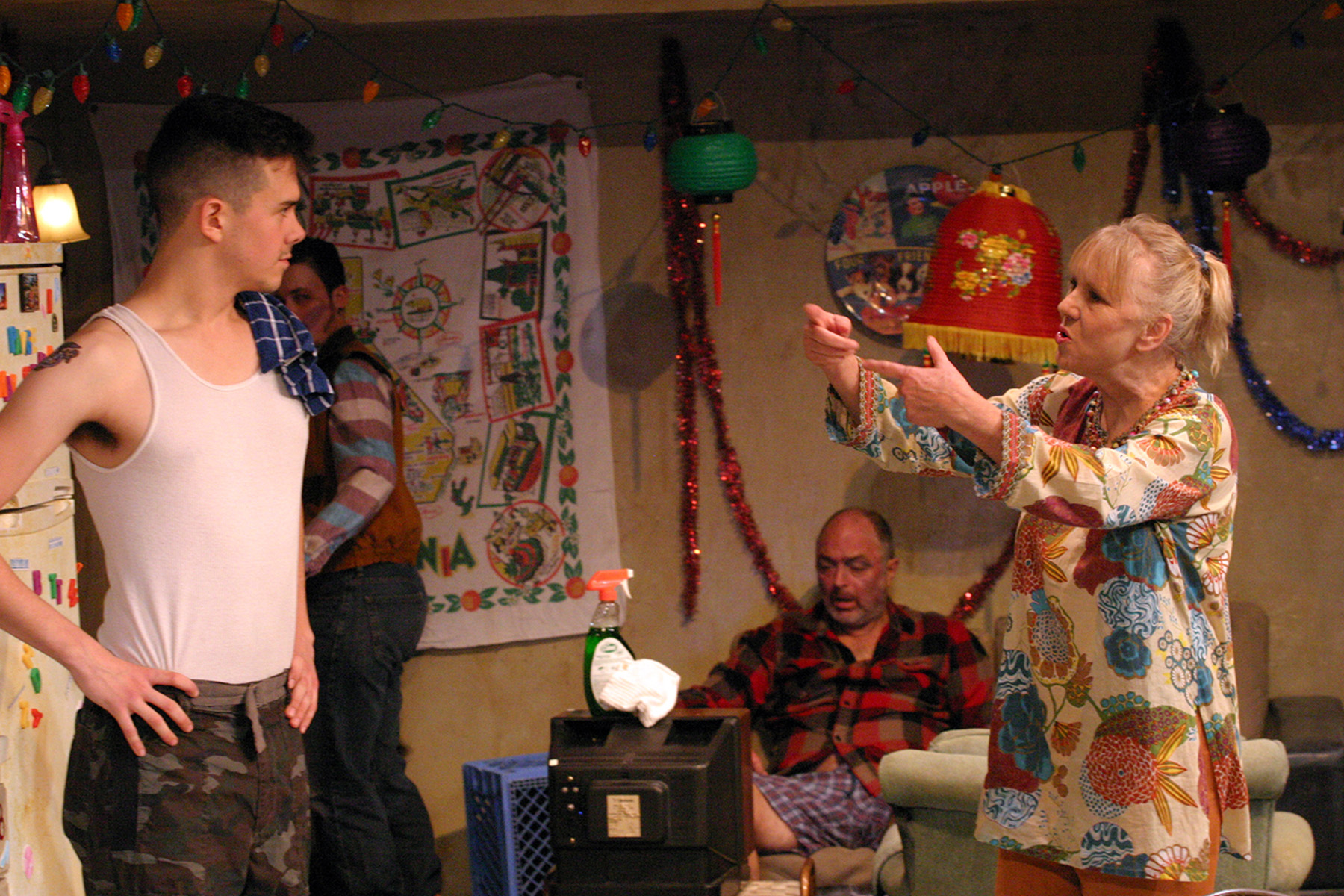 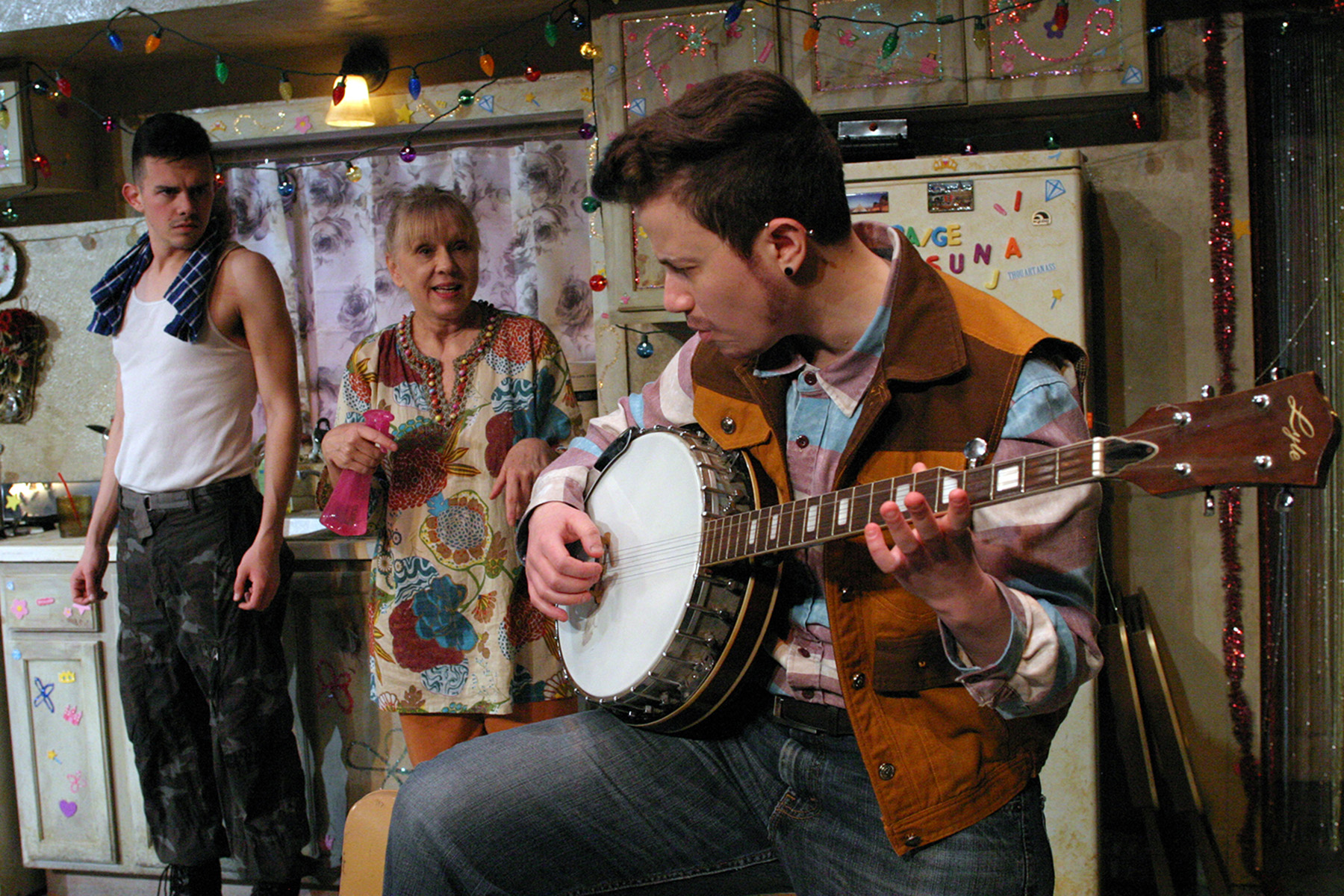 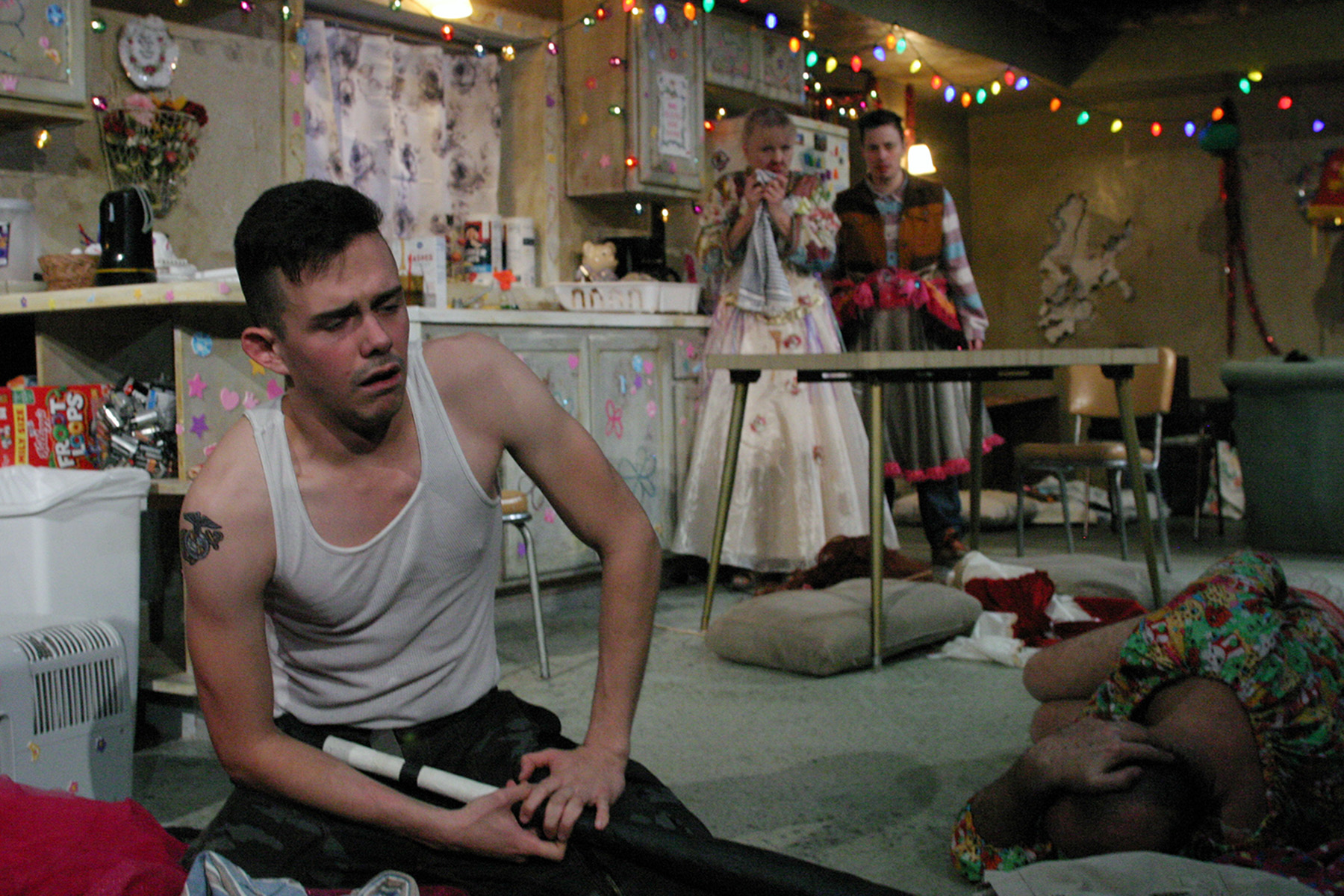 The Odyssey Theatre Ensemble opens its 50th anniversary season with the Los Angeles premiere of Hir, a darkly funny, shockingly absurd and endlessly surprising vision of a world in transition by MacArthur genius Taylor Mac.

Confidently directed by Bart DeLorenzo, Hir is not really a “gay” play and it’s not really a “transgender” play so much as the contemporary story of the Connor family deep into its own terrifying transition.

While not your traditional night of theatre, Hir is a journey through the family’s desperate response to a lifetime of physical and emotional abuse at the hands of its patriarch, Arnold.

Having suffered a debilitating stroke, the once proud and brutal Arnold Connor (in a brilliant and heartbreaking performance by Ron Bottitta, last seen in Oppenheimer at Rogue Machine), is reduced to wearing pink nightgowns, a diaper, and clown makeup.

Now, Arnold is being emasculated and humiliated by his long-suffering wife, Paige Connor (in a tour de force performance by Cynthia Kania, whom Theatricum Botanicum audiences will know from The Crucible, The Chalk Garden, Richard the III, Joyce Carol Oates’ Tone Clusters, and A Midsummer Night’s Dream).

Paige is the catalyst of this family’s paradigm shift as she no longer does cooking, cleaning, or paying the bills, thus throwing the household into utter chaos, which she not only joyfully accepts but celebrates.

Therefore, when her son, Isaac (in a commanding performance by recent CalArts graduate Zack Gearing), returns home after a three-year deployment to Afghanistan, he encounters a household in complete disarray, both physically and emotionally.

“We are the new; beyond gender; beyond possessions; beyond the past!” Paige declares to her son.

Repeatedly vomiting into the kitchen sink appears to be his primary response to the initial shock of seeing his family again and to what they have become.

Completing the ensemble is a hilarious and enlightening performance by Puppett (Catfish: The Untold Stories; “Drifter”) as Isaac’s younger sister and the newly transgender-queer Max. Now, fully in transition, Max insists on being referred to as “hir.”

The word “hir” is a gender-neutral, third-person-singular object pronoun that replaces the use of him or her.

According to Mac, “The title is a metaphor. It’s pronounced ‘here,’ and I enjoy the duality of something being about gender and also about place.”

Hir was developed at San Francisco’s Magic Theater, where it premiered in 2014, and at New Dramatists as part of their Creativity Fund. It opened in New York City at Playwright’s Horizons a year later, where it was named one of the “Top Ten Best Theater of 2015” by The New York Times. “Perhaps no play this year inspired a greater sense of awe than Taylor Mac’s audacious dive into the dysfunctional-family playpen of American theater,” wrote Times theater critic Ben Brantley.

Hir is an outrageous, brilliant, hilarious, and enlightening evening of theatre.