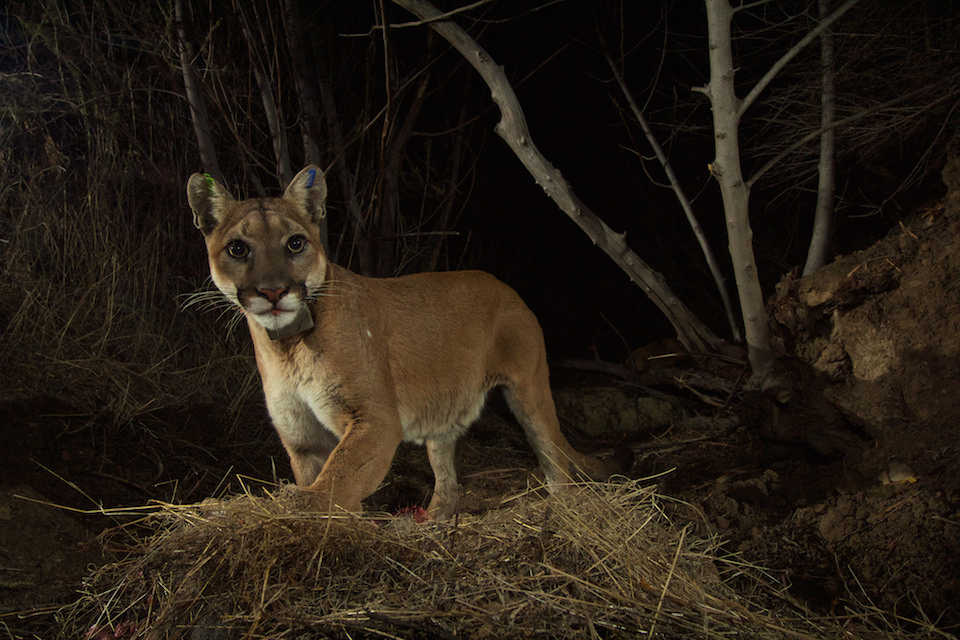 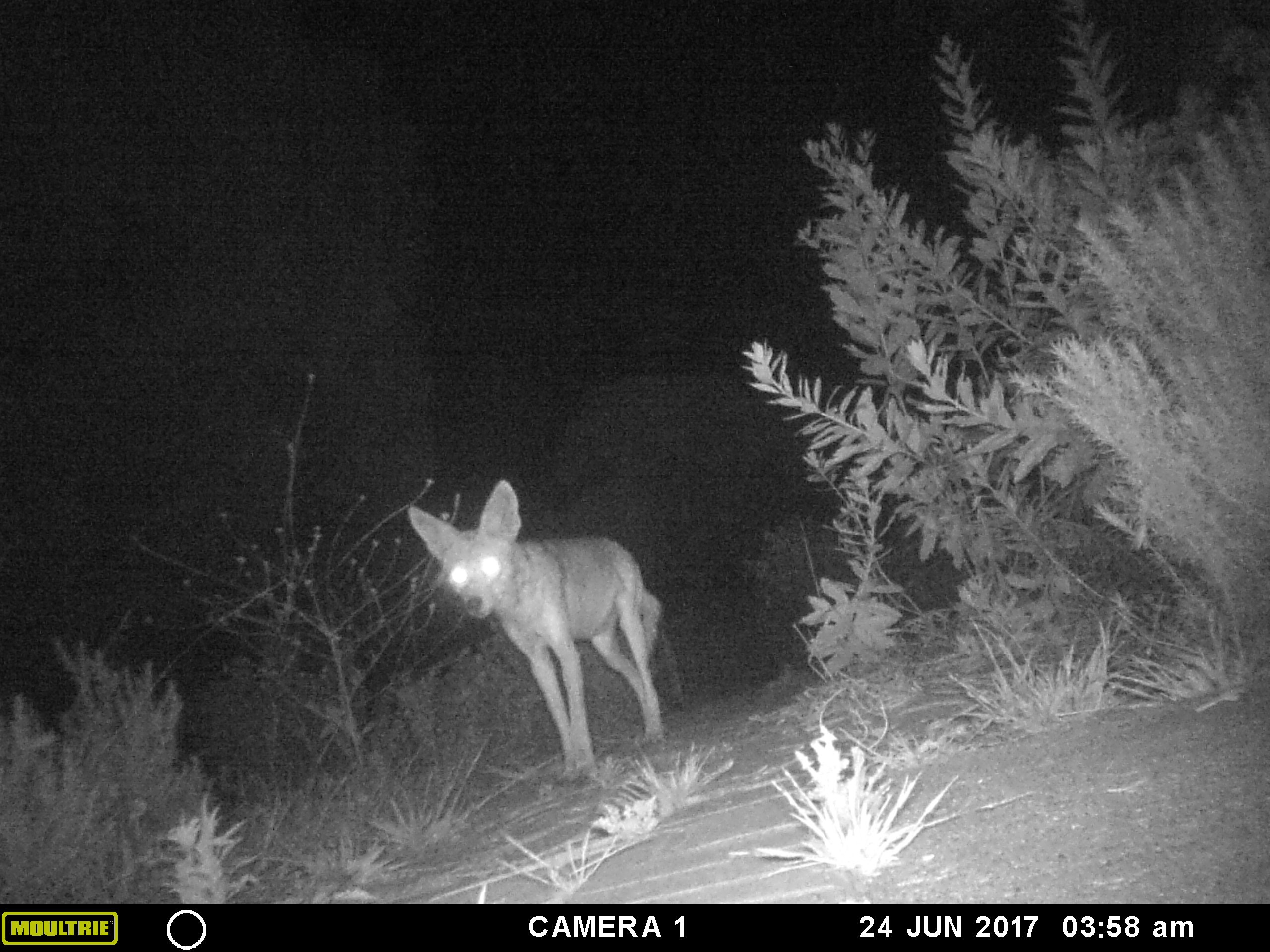 Coyote that Guldimann caught on her remote camera last month in her backyard. 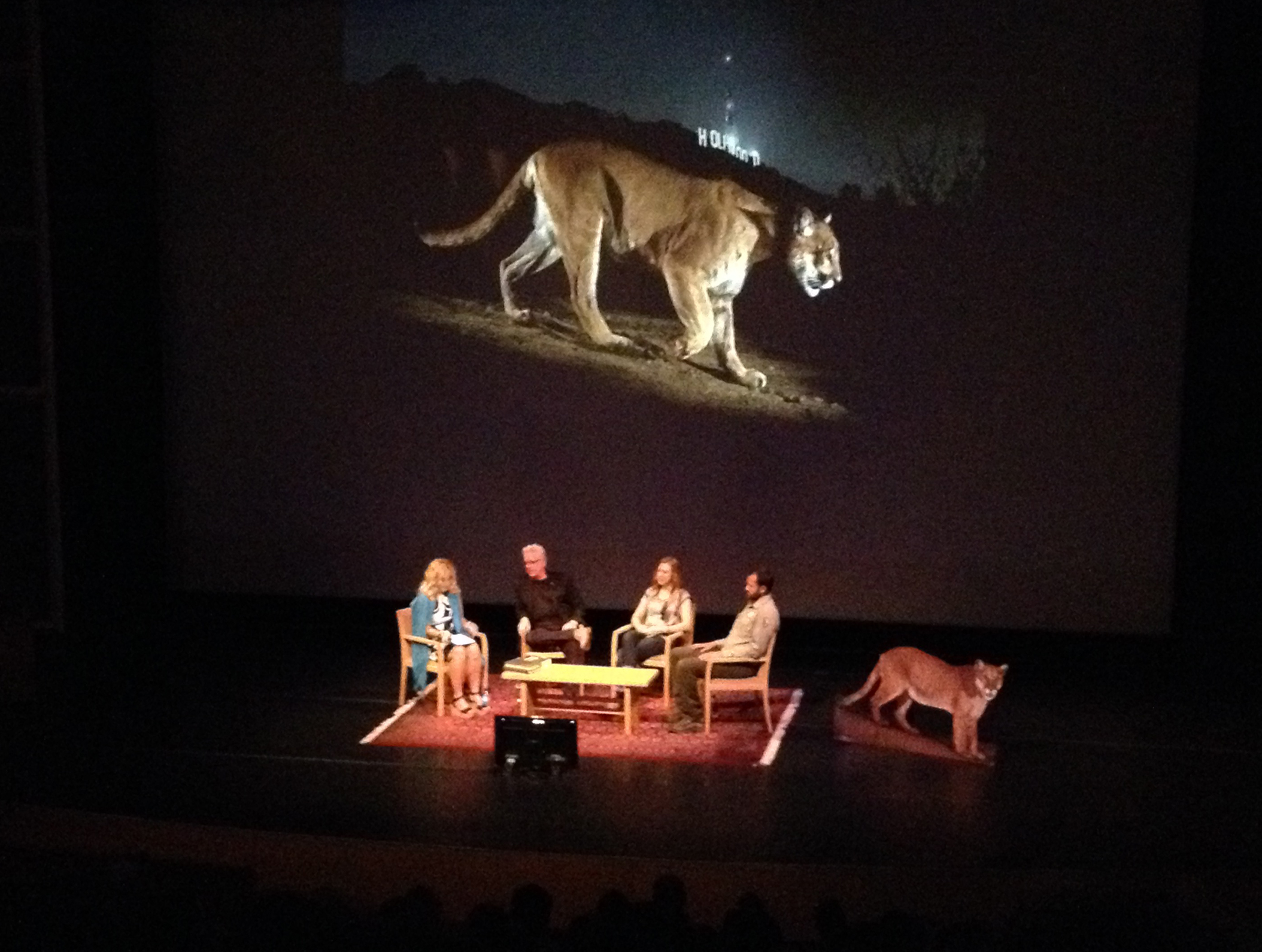 Beth Pratt Bergstom, Steve Winter, Johanna Turner and Justin Brown, with Winter’s photo of P-22 i-projected on the wall behind them, and Beth’s cardboard cutout of the P-22 on stage with them.

There are just two major cities on earth where big cats and humans are known to coexist, one of them is Mumbai, India, where leopards still thrive, the other is Los Angeles, where urban mountain lions eke out a perilous existence on the margins of an ever-expanding cityscape.

National Geographic photographer Steve Winter has documented both of these secretive big cat populations and revealed them to the world.

If mountain lion P-22, the Santa Monica Mountains cougar who made his way across Los Angeles freeways to Griffith Park, has become the poster child for urban wildlife, it’s largely because Winter took the now-iconic photo of him with the Hollywood sign in the background, catapulting the cat onto the international conservation stage.

Winter joined fellow wildlife photographer Johanna Turner and National Park Service (NPS) ecologist Justin Brown for a special discussion on wildlife photography at the Getty Center that was moderated by Beth Pratt-Bergstrom, the western director of the National Wildlife Federation.

The discussion centered on the ways in which images can contribute to human-wildlife cohabitation. The setting matched the theme, since the museum complex is surrounded by 600 acres of critical habitat in the eastern Santa Monica Mountains, and the 110-acre campus is home to wildlife as well as artwork.

Winter explained the genesis of the P-22 portrait. “I needed an image of an urban cougar,” he said. “I tried Golden Gate Bridge in San Francisco and got coyotes and bobcats, but I was not getting what I needed.” He recounted meeting National Park Service ecologist and Santa Monica Mountains cougar authority Jeff Sikich at an event in Montana. “He texted me eight months later,” Winter said. “I was at the dentist. He said call me now.”

That call was about P-22. Winter headed for Los Angeles. It took months of moving his cameras to get that one iconic image.

“It was very difficult,” he said, “but in the end, an image like that can change things.”

Winter’s portrait of P-22, which has appeared in publications all over the world, inspired local photographer Johanna Turner to try her hand at photographing L.A.’s big cats.

“I grew up on the East Coast where there were no charismatic wild cats,” Turner said. “I moved here for work and thought [L.A.] couldn’t be more urban, and here were these huge animals no one ever sees.”

Turner set her first camera trap in a Verdugo Hills backyard and captured an image of mountain lion P-41. “It was an electric feeling,” she recalled. “These animals have been here the whole time, but now you get to see them.”

Turner said she was initially urged not to share the images out of concern that the presence of the lion in the small neighborhood would cause fear and potential harm to the big cat. However, when she finally published the photos the response was overwhelmingly positive.

The photographers discussed the challenges of photographing a subject that can’t be controlled and which may or may not even show up at the right time and place.

Winter’s photo of P-22 and an equally stunning image of the leopards of Mumbai on a hill high above the city at dawn required meticulous planning, months of patience, and a certain amount of luck.

“You sit back and hope,” Turner said.

NPS ecologist Justin Brown shared some of the ways the NPS uses its remote cameras to gather data on wildlife, including the health of individual animals like P-22. Remote cameras revealed when the cat developed mange from rodenticide poisoning. In conjunction with radio collar data, that knowledge enabled ecologists to provide lifesaving treatment to the cat. The cameras also reveal how wildlife uses culverts and other infrastructure to cross roads and navigate through the urban wilderness.

“[Remote wildlife photography] can help Caltrans get wildlife off the road,” Brown said, explaining that the remote cameras help gather data on the locations where wildlife are most likely to attempt crossing roads and freeways, like Liberty Canyon, where plans are underway to build the largest wildlife overpass ever proposed, crossing the entire 101 freeway and adjacent Agoura Road.

In one instance, a camera trap revealed deer using an underpass to bypass a freeway. “Deer are the hardest species to get across roads,” Brown said.

The cameras turn up other surprises: rarely seen animals like badgers, shy, secretive bobcats, and last year, evidence of the first bear in the Santa Monica Mountains in almost a century. That many of the NPS remote images are incredibly beautiful and unexpectedly haunting or even humorous is an unexpected bonus.

All of the photographers agreed that the remote cameras, now wildly available and surprisingly affordable, have become an important tool in documenting wildlife and raising awareness of its presence among us.

Pratt-Bergstrom summed it up by saying, “We are not isolated from the wild, we are in the wild [even in an urban setting].

Winter agreed.  “The world now sees mountain lions,” he said, describing his photography as a way to reveal an unseen city.

For Winter, the National Geographic’s social media presence, where his photos are displayed, has been a revelation. The organization’s Instagram account has nearly 80 million followers and has become an important way for the organization to share its message of conservation and exploration.

“We need nature,” Winter said. “We need places where we can hear silence. It’s vital to see we can live together.”

More information on Winter is available at: https://www.stevewinterphoto.com

Johanna Turner’s photographs are published regularly on her website: http://www.cougarmagic.com

Upcoming events at the Getty Center can be found at http://www.getty.edu

SEND US YOUR BACKYARD WILDLIFE PICTURES

The Messenger is starting its own remote camera wildlife project. We’ll be reporting back on what we find in Topanga’s backyard and invite our readers to join the project and share their wildlife photos with us: editor@messengermountainnews.com.