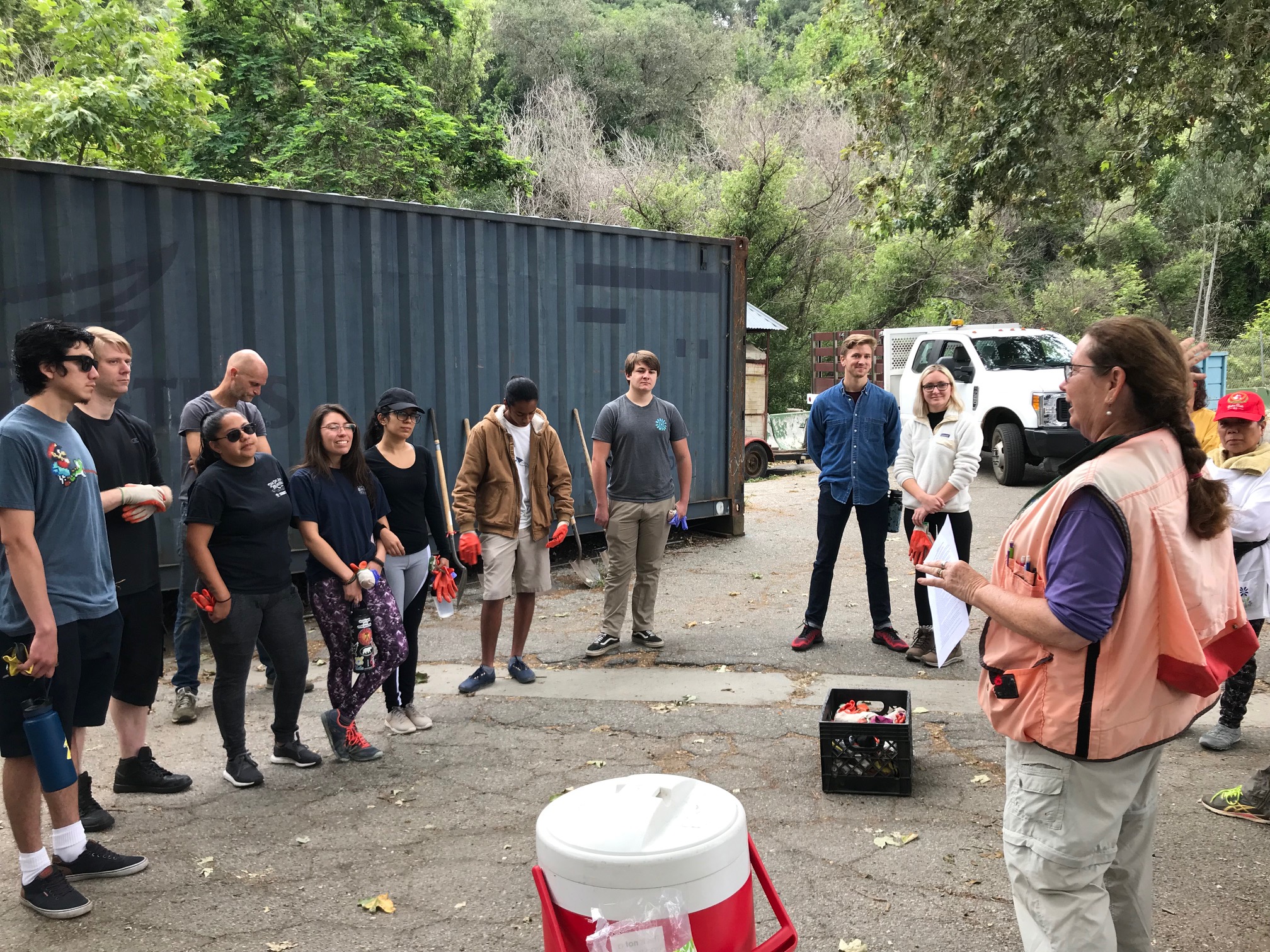 Above, Rosi Dagit gives initial instructions to Stream Team and volunteers. The most important thing, she said, was “Do not get poked, scratched, or injured in any way.” Photos by Flavia Potenza 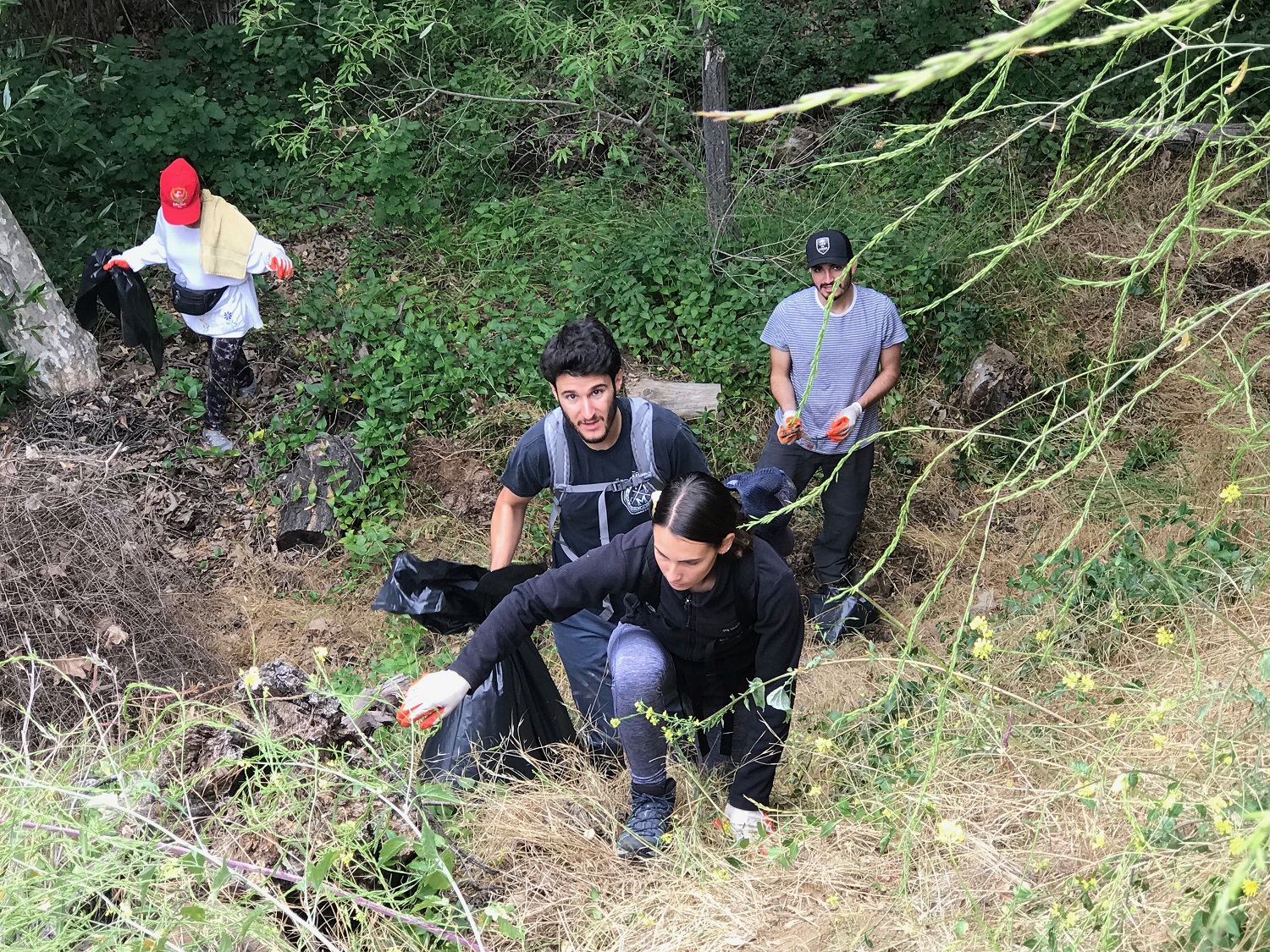 It is a steep incline down to the creek and harder still to climb back up carrying trash. 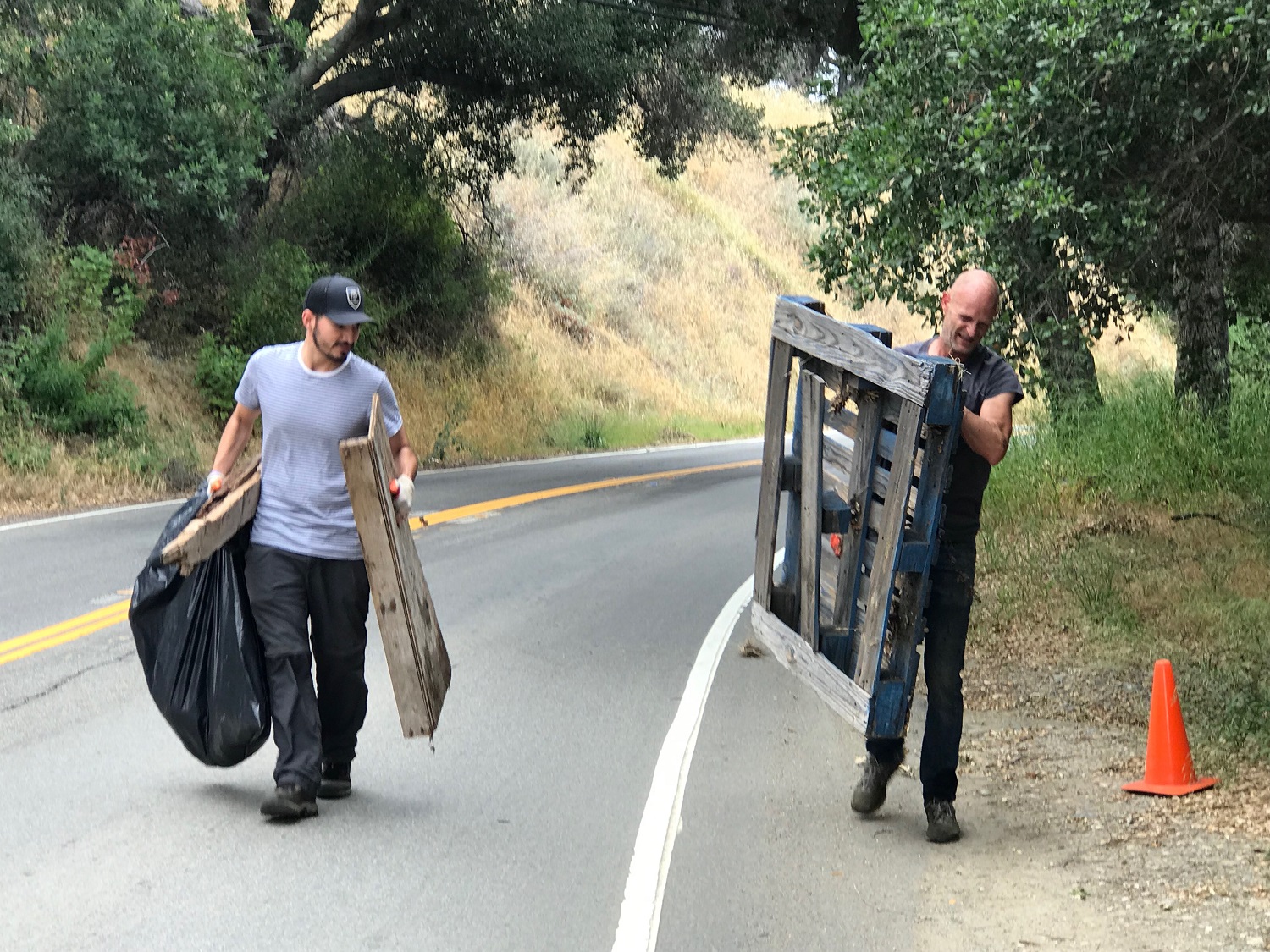 Cast-off construction materials often end up in the creek instead of the landfill. 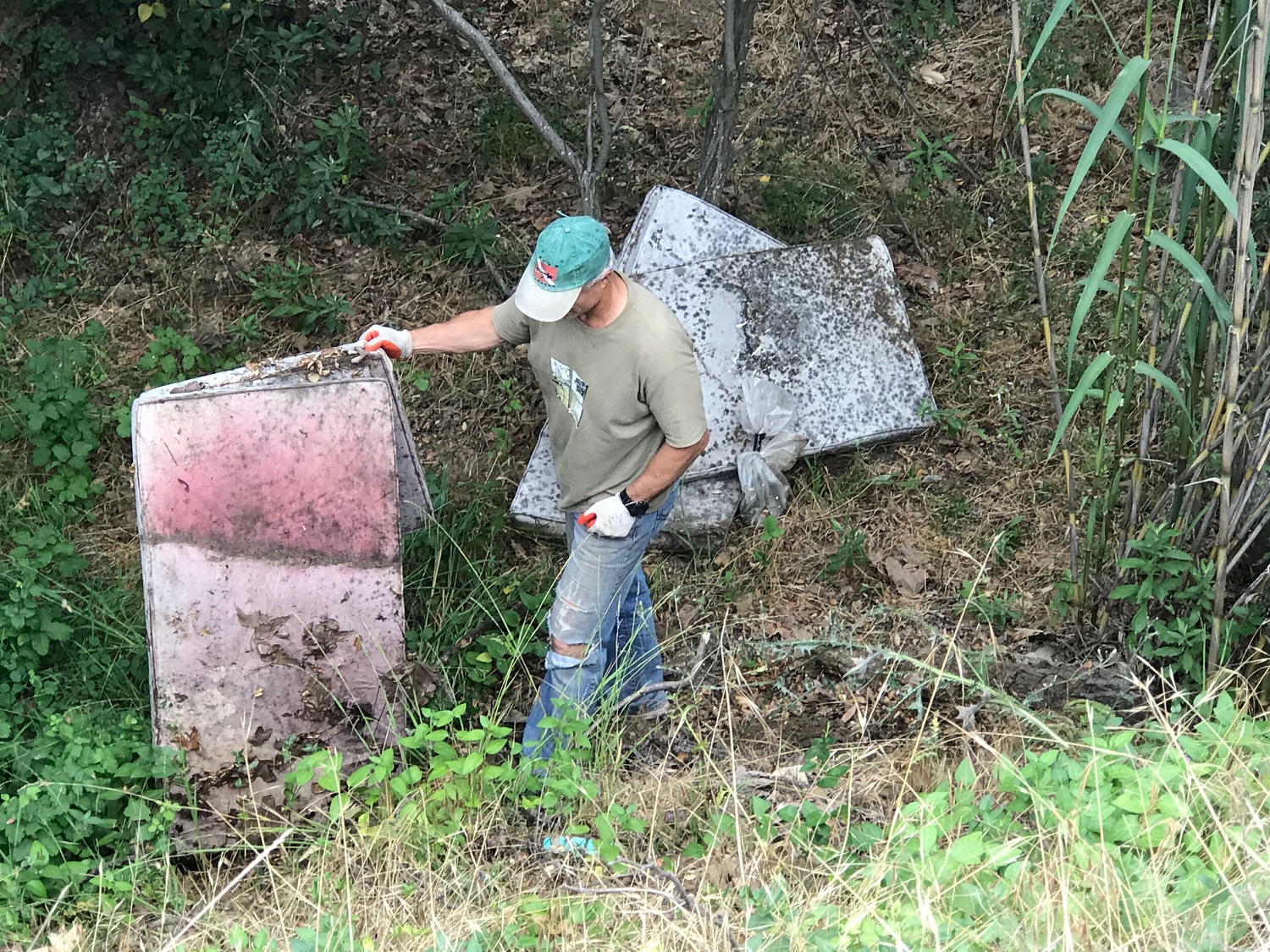 The first find was moldy mattresses. 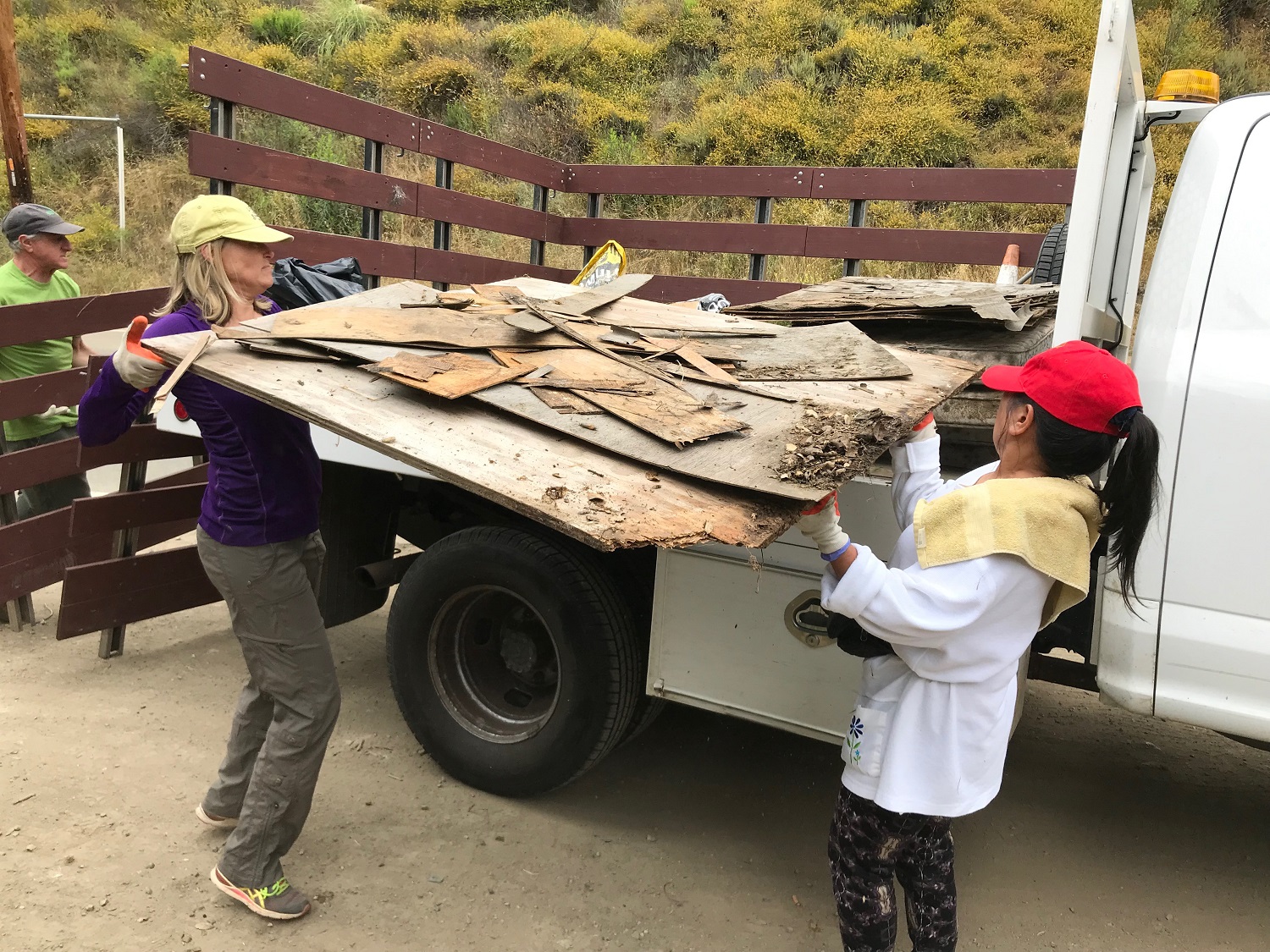 Woman Power! It’s all about teamwork. 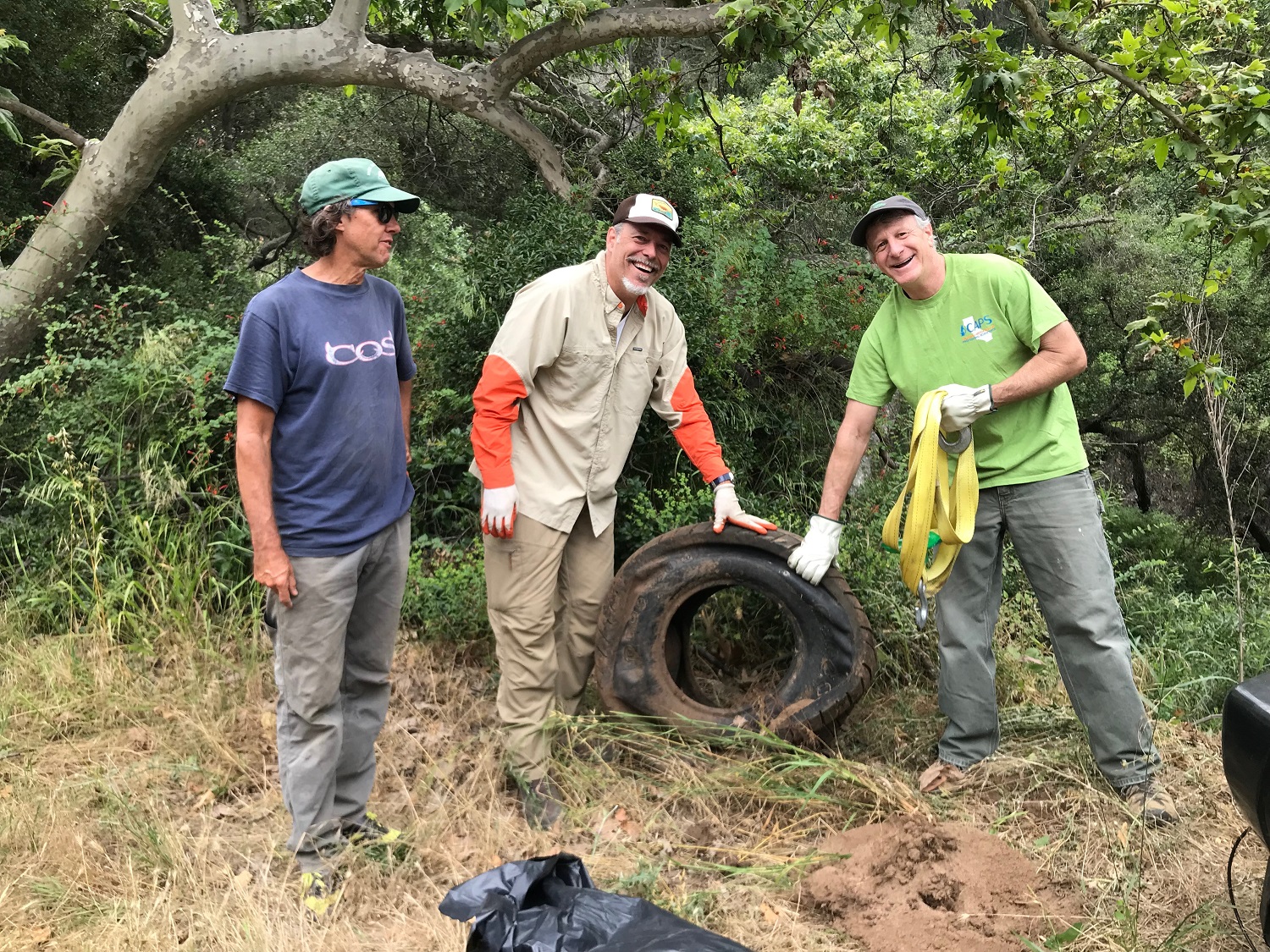 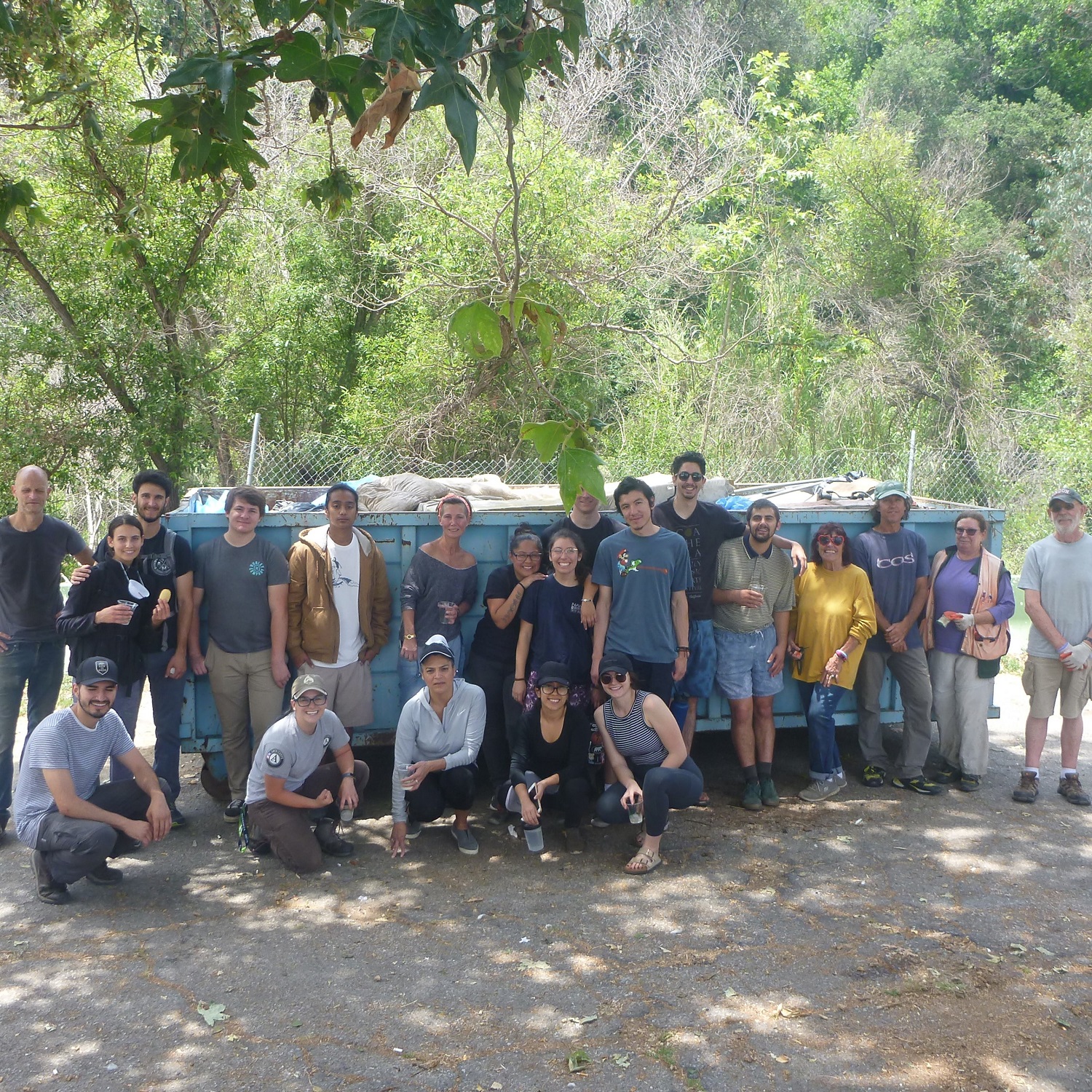 Not everyone was able to stay to the bitter end, but these are the diehards who did. Photo courtesy of RCDSMM

Cleaning up Topanga Creek is a dirty job.

Restoring it to its natural beauty doesn’t last long but every year, since 1995, Rosi Dagit, Sr. Biologist for the Resource Conservation District of the Santa Monica Mountains (RCDSMM), and her Stream Team volunteers clean it up.

Addressing the volunteers before they started, Dagit outfitted them with protective gloves, warning them to stay away from the abundant poison oak growing in the creek, rattlesnakes, and human feces.

“Above all,” she admonished, “Do not get poked, scratched, or injured in any way. That is not allowed.” Although everyone laughed, that was not a joke.

Two teams were set up, one for the area behind Topanga Creek General Store, another for marked areas along Old Topanga Canyon Road, a mile or so up from the center.

Leading the Old Canyon crew were Watershed Stewards Program member Anjelica “Jelly” Kahler helping the RCD for the year; Executive Officer of the RCDSMM Clark Stevens, and Richard Brody (aka Brody), who manages the restoration of the Ballona Wetlands Ecological Reserve.

Locations were chosen based on areas where trash was easily visible from the road. Brody had a CA Department of Fish and Wildlife truck with a winch to lug heavy stuff up the steep sides of the creek. His youngest daughter, Catalina, was his assistant in charge of the button that controlled the cable.

Without hesitation, volunteers quickly went to work, sliding down the steep inclines into the creek. Sounds of glass bottles and cans being tossed in hefty trash bags were the easy pickings. Later, they would wrestle heavy wooden pallets, plywood, and all sorts of construction castoffs, among them a water-softening tank, up the banks and toss them into Brody’s truck. After just an hour, we had an entire truck bed full of garbage, and the banks of Topanga Creek were pristine once more

The moment came when that truck, already half-filled, was called into action. A fat racing tire was pinned under a boulder and needed to be hooked up to the winch. Moving the truck into position and with Catalina on the button, Brody primed the cable, pulled it out, hooked an extension strap to it, and the men below fastened it to the tire. Cheers sounded as the tire appeared over the berm. Success! And kind of exciting. Stevens hefted it into the truck, as Josh Halabe pointed to where he had seen a rattlesnake that obviously got out of the way of all the commotion.

The team behind the Market divided into two groups and covered the whole area between the bridge at Abuelita’s and the bridge just past the post office. Most of the trash was really litter, but there was also some furniture, mattresses, lots of rugs buried under the sand, and even an old TV. “Worse,” says Dagit, “we did find several ‘direct deposits’ (human feces and soiled toilet paper) along the creek bank.”

Around 11:30 a.m., when everyone from the Old Canyon team thought they’d be going home, Dagit called for all-hands-on-deck. A couple of days earlier, she had looked under the bridge between Hidden Treasures and the former Abuelita’s restaurant, where transients often set up camp, and found nothing in the creek channel, but she had not climbed up the bank where there was a huge pile of debris from an old encampment.

Without hesitation, volunteers moved to the area and took charge of what seemed an endless parade of trash piled into Dagit’s and Brody’s trucks that were unloaded into a container provided by Peter Norwood’s Topanga Hauling stationed in the parking area behind the General Store next to the creek. David Gautry’s job was to manage packing everything into it and providing more trash bags and gloves as needed.

In two hours, 10 a.m. to noon, volunteers from Santa Monica College, local high schools, Topanga Trash Warriors, and long-time RCDSMM Stream Team members collected two tons of trash that Norwood then took to the landfill, and what they pulled out would be inconceivable if you didn’t witness it: futons, mattresses, a four-foot water-softener tank, a packed suitcase, hazardous waste, construction waste meant for the dump that didn’t make it there.

Many thanks to the Town Council and Supervisor Kuehl for covering the $500 landfill disposal costs, as well as providing protective gear and the trash bags.

Some volunteers, new to the game, were not dressed as they were instructed—long pants, long-sleeved shirts, sturdy closed shoes—and despite the poison oak remedy available to them, all volunteers would need a serious scrub-down once they went home.

The RCDSMM Stream Team was initially formed to get the big trash out of the creek in 1995. Volunteers focus on efforts in the fall before the rains come and again in the spring to get things cleaned up for the creek critters. Things like sofas, paint cans, mattresses, and even a kitchen sink have been pulled out over the years, with each event gathering between two and four tons of trash.

Catching up with volunteer Joseph Rosendo, host of the TV show, Travelscope, is a footrace. He was lathering Tech-nu, a poison oak remedy, on his arms as he walked up to the bridge. As much as he does for the community as co-founder of the Trash Warriors, who meet early Sunday mornings to clear trash off the Boulevard, he pitched in yet again. The man never stops!

Speaking of never giving up, look who’s been doing this for 24 years. “Why,” we asked.

“It needs to be done,” Dagit replied. “We are regularly hiking the creek to check on the critters and often work with state parks and Caltrans to organize removal of the crazy stuff that gets dumped. It is a great way for folks to do something really concrete to help keep the creek and Topanga beach clean and safe…and it is sooo satisfying,” says Dagit.

SAVE THE DATE! For those brave souls who might want to join in the fun, your chance comes on September 21 for Coastal Cleanup day.