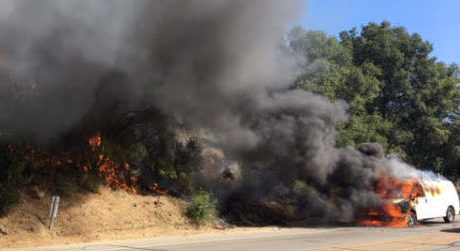 The Cheney Fire, caused by a vehicle fire, charges uphill towards the Topanga Community Center. Photos by James Grasso 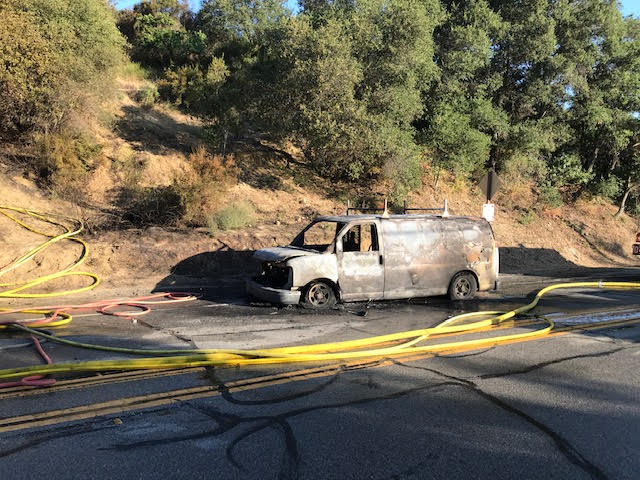 Thanks to rapid response by firefighters and Fire Hawk water drops, the fire was out in 32 minutes with only 2-3 acres burned. 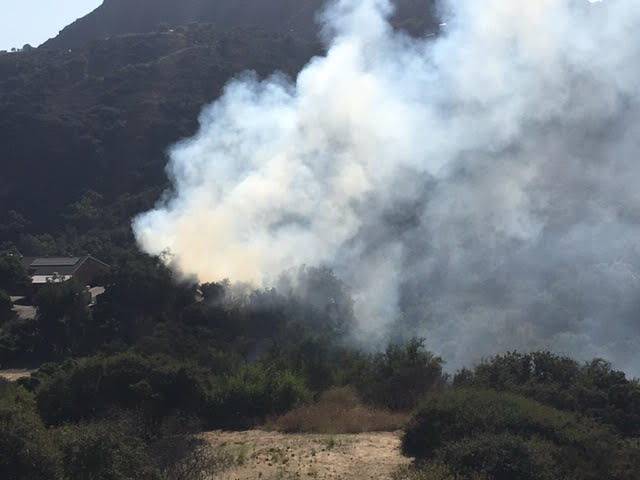 Cameras at 69 Bravo Helistop spotted the smoke and put out the alarm. 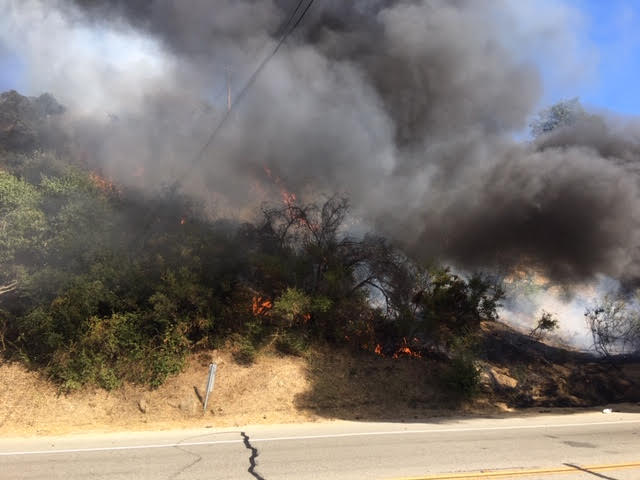 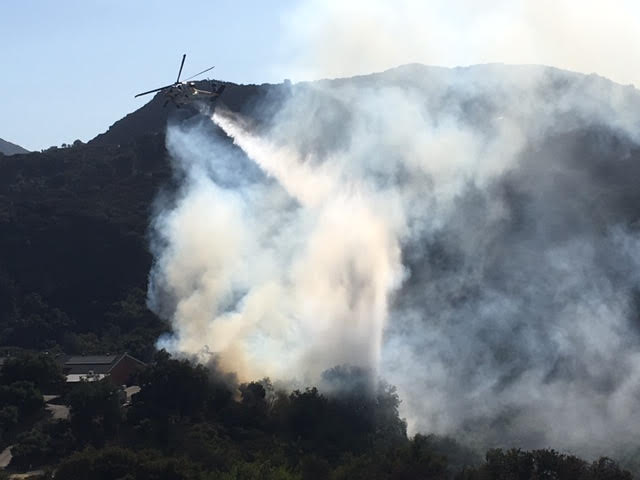 Fire Hawk helicopter took up 1,000 gallons of water from 69 Bravo to knock down the fire. 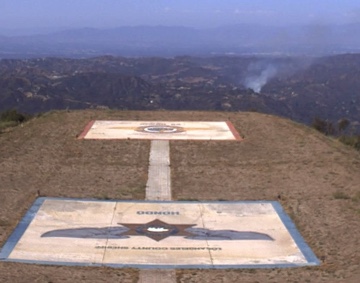 Topanga had a close call on Friday, July 26, when a vehicle fire on Topanga Canyon Blvd. put the Topanga Community Center and neighboring homes at risk. The fire quickly engulfed the vehicle—a van—and spread into brush along the roadside.

Rapid response by firefighters and helicopter water drops, stopped the blaze from spreading beyond the initial 2-3 acres. By 5:45 p.m. the danger was over and the fire 100 percent controlled, although the Boulevard remained closed from PCH to Mulholland for several hours while crews mopped up.

Jerry Simer is the Topanga Community Center’s caretaker. He was notified by text that there was smoke in the vicinity and immediately jumped into his Gator to check the TCC grounds. He credits the swift fire department response for preventing a disaster, but also the current TCC board members for their diligence in improving and keeping the grounds clear.

“People don’t realize that we take this very seriously,” Simer told the Messenger Mountain News. “We are clearing brush all year round. Rick Provisor [VP of Maintenance] has been super-diligent about brush clearance and earth removal with his bobcat.”

Simer said he received texts from several people alerting him of smoke within minutes of the start of the fire, but he couldn’t tell where the smoke was coming from. He jumped into his Gator and checked the ballfield to make sure there were no goalposts, nets or equipment to hinder landing helicopters, made sure to drop all the chains from access roads on the property, then proceeded to hook up all hoses, turned off the gas and water for the area around the propane tank.”

“It was with great foresight that a water hydrant was installed and the water tanks, used to water the ball field, were kept filled,” Simer said.

Simer reports that a fire truck arrived almost at once, and began  to fill up from the hydrant on the road up to the House. “A helicopter landed to make a quick check of the area,” Simer said.  “A second helicopter began an immediate water drop on the flames that were spreading up the hill at the back of the TCC parking lot.”

Simer gave “kudos to those guys and how quickly they put it down.” By the time the firefighters arrived, “the flames were as high as the parking lot and very visible,”  he said.

“The fire road that snakes around the property was paved in the spring and the firefighters were impressed because it acted as a natural fireblock. Crews remained on site throughout the night clearing, digging, and watching for hot spots that might reignite.”

This fire took place in a location where brush clearance created a defensible space and received a quick response from the fire department. It also occurred on a day with little wind. A vehicle fire during a Santa Ana wind event may have had a different outcome had it happened on a stretch of the canyon where fire clearance requirements had not been met.

Before the devastating Woolsey fire, Topanga dodged a number of fire threats over the last few years because of low winds. Two days after this fire, Topanga was in the news again.

A  wildfire hazard analysis released by USA Today and Arizona Republic placed the community at high risk for wildfire, with more risk factors than the ill-fated town of Paradise, where 86 people are known to have died in a fast-moving wildfire on the same day in November 2018 that the Woolsey Fire broke out in the Los Angeles area.

The analysis was based on U.S. Forestry Service census data, including population, age, and affluence, as well as fuel loads, topography, and access to evacuation egress. The authors found that 500 small communities across 11 states currently have a higher wildfire hazard potential than Paradise did.

On the five-point scale, Malibu was rated 3.31, Topanga 4.05, Agua-Dulce, 4.07, and Idylwild 4.81. In comparison, Paradise received a 3.81 rating. The fire and the new study are a sober reminder that Topanga may have dodged another disaster this time, but that the community continues to be at risk for wildfire.

September is National Emergency Preparedness month. As the weather warms and we enter fire season, it would be wise for Topanga residents to review their evacuation plans, clear brush, and create a defensible space around their homes. Now.n