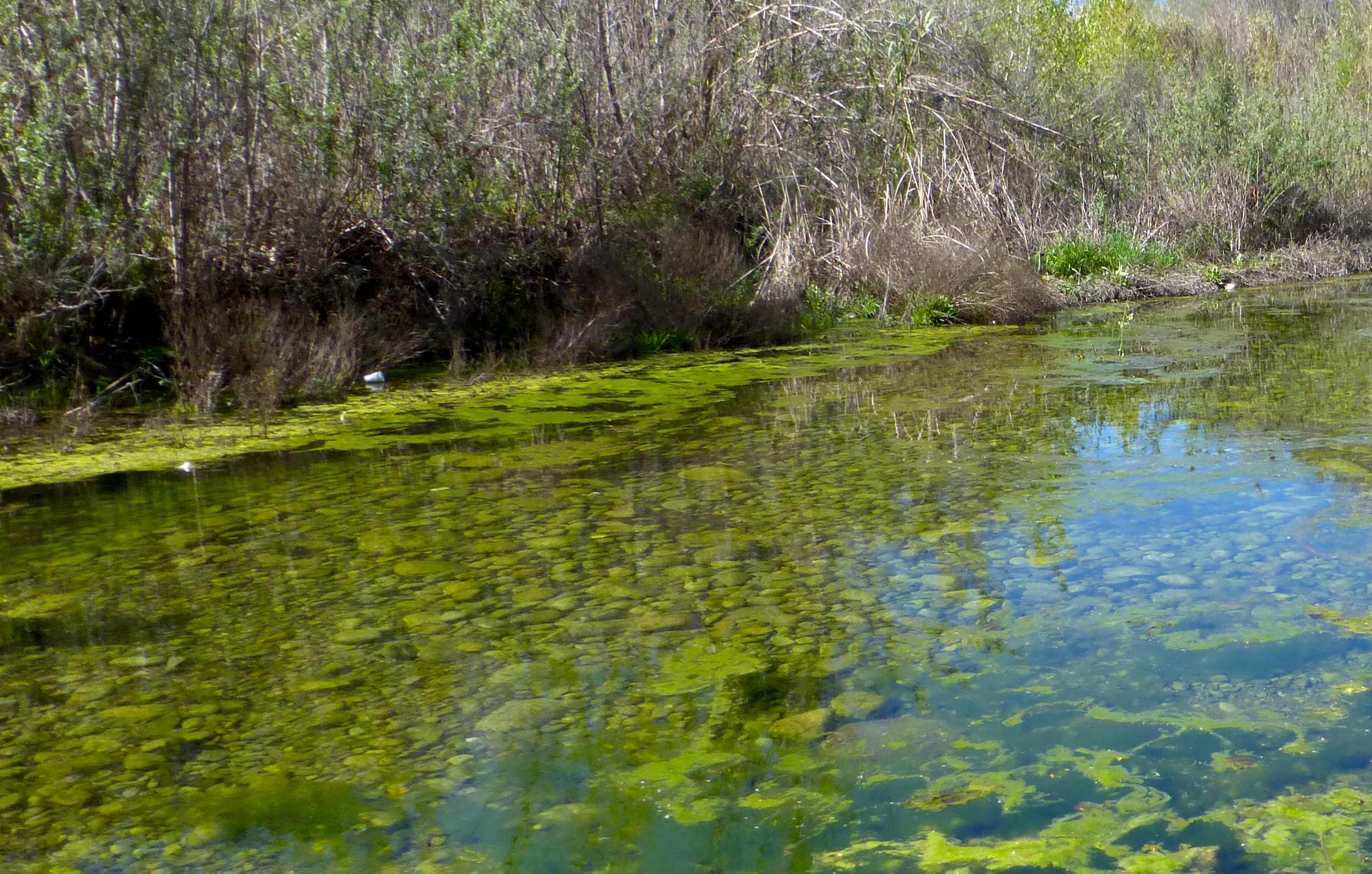 Algae. There is no real way to know just by looking if this bright green algae is toxic blue green algae, or any of a number of other HABs—harmful algae bloom—but after learning about the potential hazards of microbial contaminants like cyanobacteria, we weren’t taking any chances. 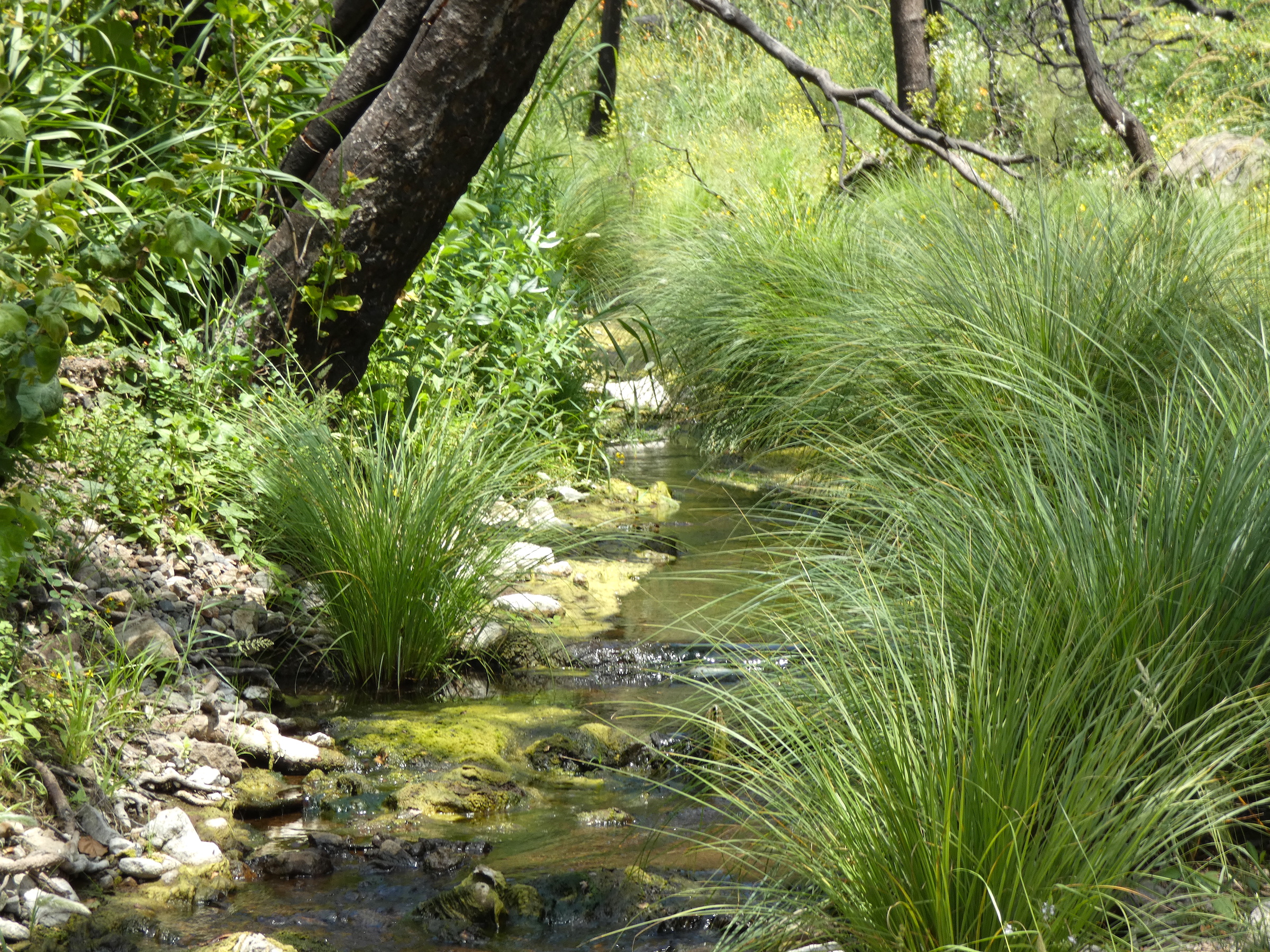 This lush green local creek still has water in it in August this year, but it is also full of potentially toxic algae. It’s a good idea to keep dogs—and children—away, no matter how tempting the water looks. 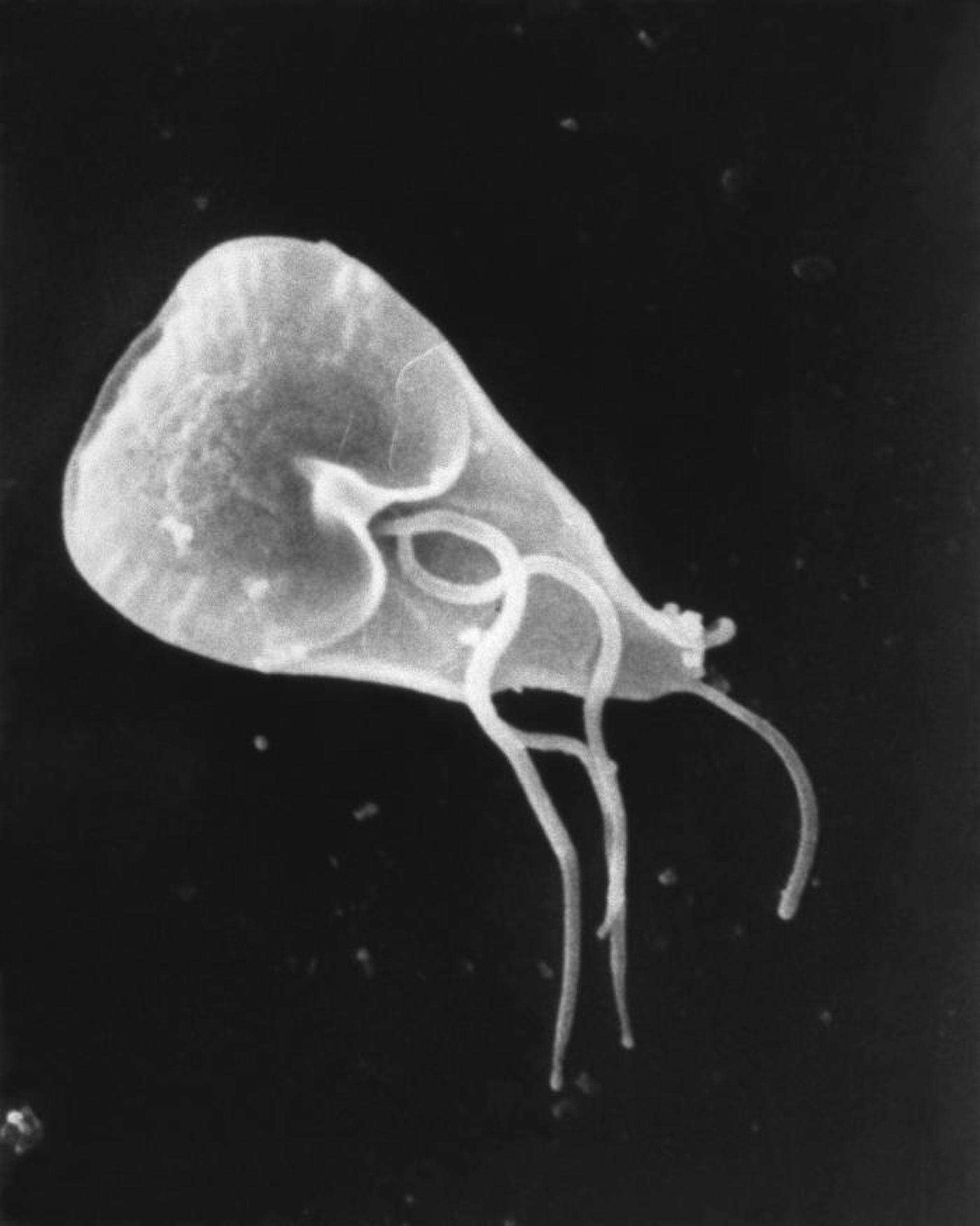 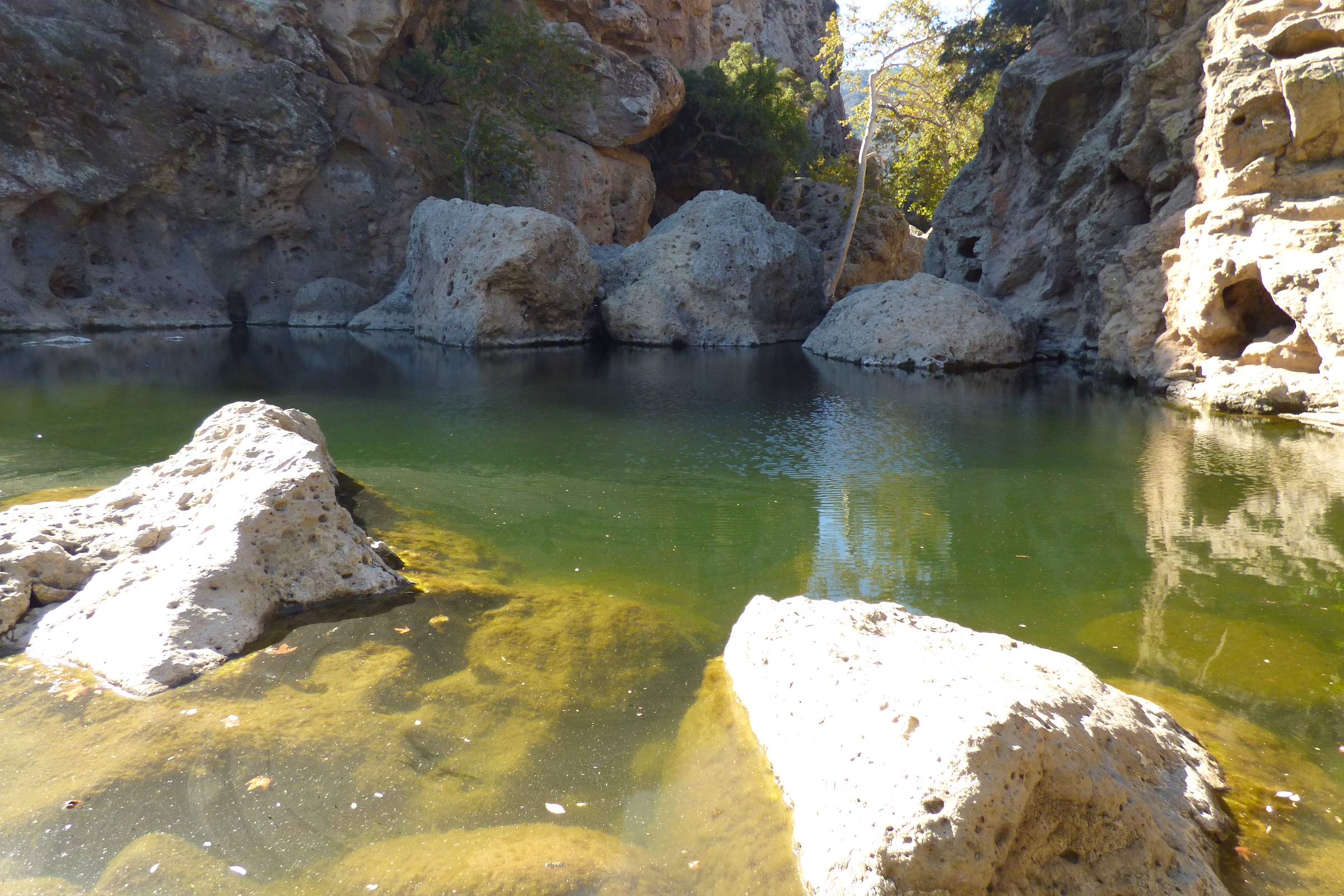 Malibu Creek’s Rock Pool is a popular swimming hole that can look a miniature Coney Island on a hot summer weekend, but this pool has regularly tested positive for high levels of E-coli bacteria. This year, thanks to late rain and warm weather, it also contains potentially toxic algae.

Microorganisms in local creeks can be bad for your health.

Heat-related illness is the biggest health threat for hikers in the Santa Monica Mountains during the hottest part of the year, but there is another hazard: toxic or contaminated fresh water.

The winter’s long, late, wet season means creeks are still running or still have deep pools of water this summer. While it may be tempting to take a dip, there is a host of waterborne organisms that can pose a serious health threat not just to humans but also to dogs and horses.

Harmful algal blooms (HAB) are more common in areas that receive more rainfall, but they can occur in the Santa Monica Mountains.

This type of water contaminant made headlines earlier this month when three dogs tragically died after playing in a North Carolina pond that contained toxic blue-green algae, but the same type of toxins can also occur locally.

The potentially fatal toxin in HAB is created by microscopic cyanobacteria, but it’s just one kind of toxin that can be present in HAB. Algae “blooms” when conditions are right—warm water with a high nutrient load. NOAA cautions that contact with HAB can cause rashes, hives or skin blisters, runny eyes and nose, sore throat, asthma-like breathing problems, and other allergic reactions. Ingesting water containing HAB can cause abdominal pain, headache, sore throat, nausea, vomiting, dry cough, diarrhea, blistering in and around the mouth, and it can even cause pneumonia.

Dogs that drink the water may experience vomiting, diarrhea, and death. Symptoms include pale mucous membranes (check the gums), lethargy, and weakness. Other animals are also vulnerable, including horses. Not all  HABs are blue green in color. Toxic algae can be dark green, red, or brown, and some algaes remain toxic even when dead and dried.

In California, HABs are voluntarily reported, which means monitoring data is limited. The most recent report for the Santa Monica Mountains area was in lower Malibu Creek in May, where volunteers participating in stream monitoring experienced rashes and stomach upset after exposure to the water. HABs aren’t limited to natural water sources, they can grow in backyard ponds and pools, or even birdbaths.

HAB is scary because it can be lethal, but it is less common in the Santa Monica Mountains than two microbial organisms: Giardia and E-coli.

Giardia is a microscopic single-celled parasite that causes the diarrheal illness known as giardiasis. This microorganism is found in soil, food, or water that has been contaminated with feces from infected humans or animals. It’s endemic in local creeks, streams, and ponds. The Giardia microbe has a tough outer shell that enables it to survive for long periods of time outside of its host.

Drinking creek water, or even just accidentally swallowing pond water while swimming is a sure-fire way of contracting giardiasis. Dogs, cats, and horses are also susceptible. The Centers for Disease Control website lists diarrhea, gas, abdominal discomfort, nausea, and vomiting as symptoms for both humans and animals. However, it is possible to be infected and have no signs or symptoms of illness.

Giardiasis can cause weight loss and prevent the body from absorbing fat, lactose, vitamin A, and vitamin B12. The illness is rarely fatal, but it can be debilitating. In children, severe giardiasis has the potential to delay physical and mental growth, slow development, and cause malnutrition, the CDC warns. Less common symptoms include itchy skin, hives, and swelling of the eye and joints.

If untreated, the symptoms of giardiasis may appear to resolve on their own, only to recur days or weeks later. Beating this tiny parasite usually requires treatment with prescription antimicrobial medication.

Escherichia coli, better known as E-coli, are fecal bacteria that are frequently found in local creek water. Most E. coli bacteria are harmless and are even an integral part of the human intestinal tract, but some have the potential to cause severe illness. These pathogenic organisms can cause kidney failure, neurologic damage or even death.

A 2015 Heal the Bay study of water quality in several popular swimming holes in the Santa Monica Mountains found elevated levels of the bacteria at all sites tested.

Dogs, especially puppies, and horses are also susceptible to an E-coli infection; young animals or those whose health is otherwise compromised are at higher risk.

There is no antibiotic cure for an E-coli infection. Rest and plenty of fluids to prevent dehydration are usually the recommended treatment. Anti-diarrheal medication may slow the body from ridding itself of the toxins and usually isn’t recommended. The most serious complication from E-coli is a condition called hemolytic uremic syndrome and requires hospitalization. Victims of this life-threatening condition may need IV fluids and sometimes extreme measures that include blood transfusions and kidney dialysis.

The best way to avoid all three water contaminants is to avoid contact. It can be hard to tell if algae is toxic or not by its appearance, but at least it reveals its presence. Microbial contaminants can be present in water that appears pristine. The best way to avoid water-borne toxins is to stay out of local creeks and pools, or at least avoid contact with eyes, nose, mouth, and open cuts. Also wash hands after contact with creek water.

Make sure to bring ample clean water for canine hiking companions, and a folding dish or special dog water bottle for them to drink from. Don’t be tempted to let dogs drink or play in water where algae is present.

Determining the Fate of California’s Coast