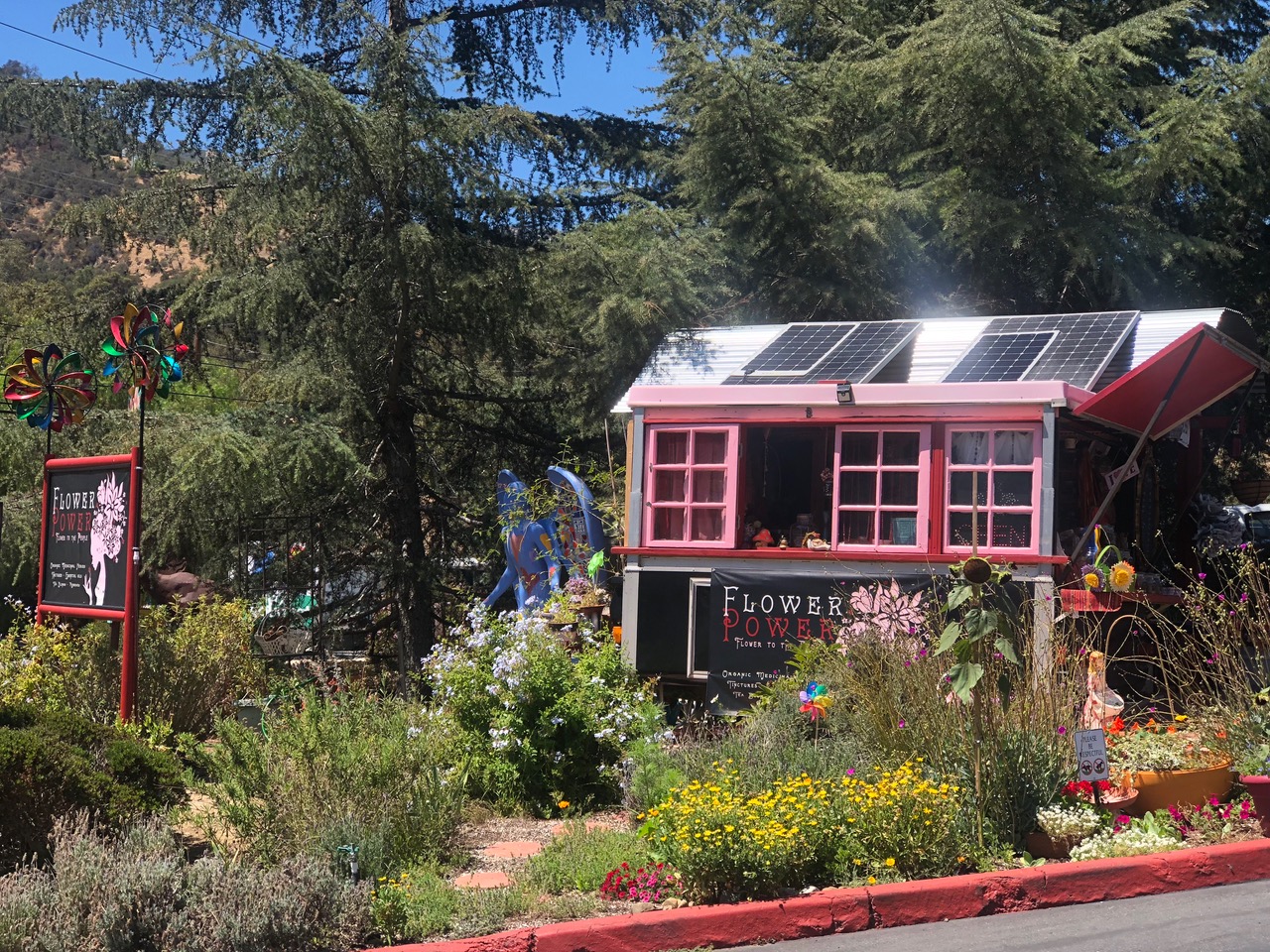 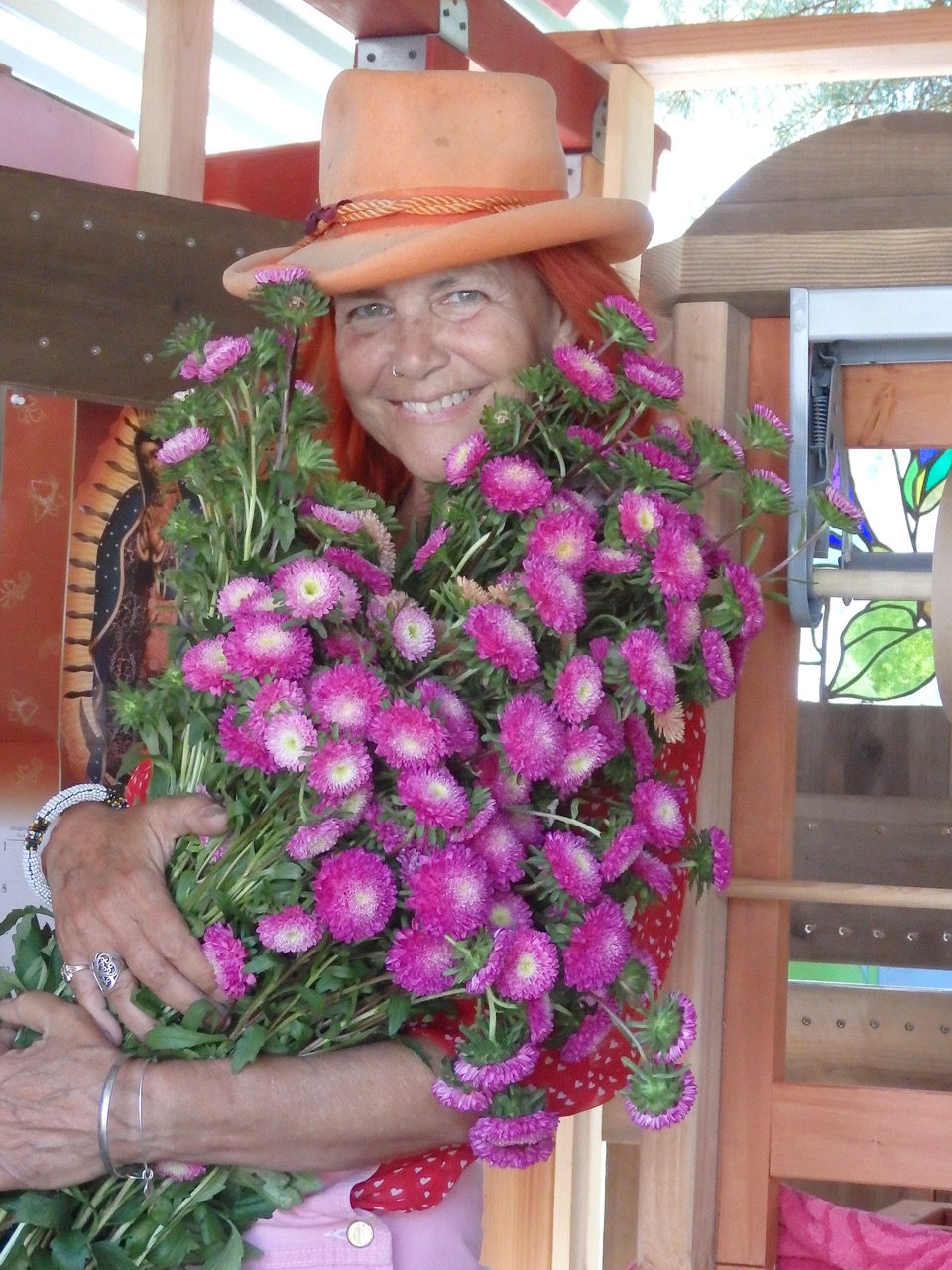 Gidget Zapata with her arms full of the fresh flowers she loves and that have made her the "flower lady of the canyon." Photo by Annemarie Donkin 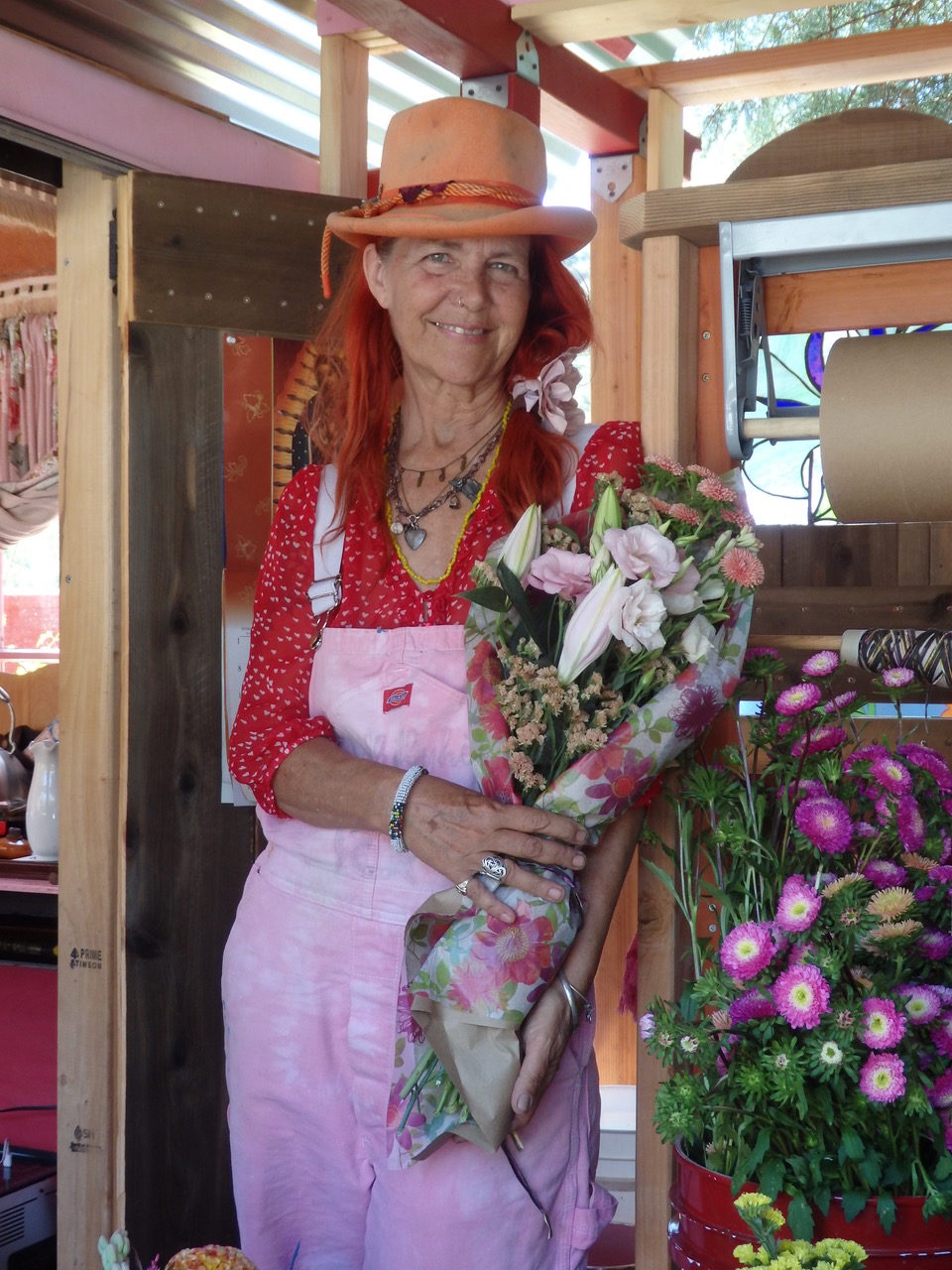 Gidget Zapata with a custom bouquet of lilies and other power flowers. Photo by Annemarie Donkin 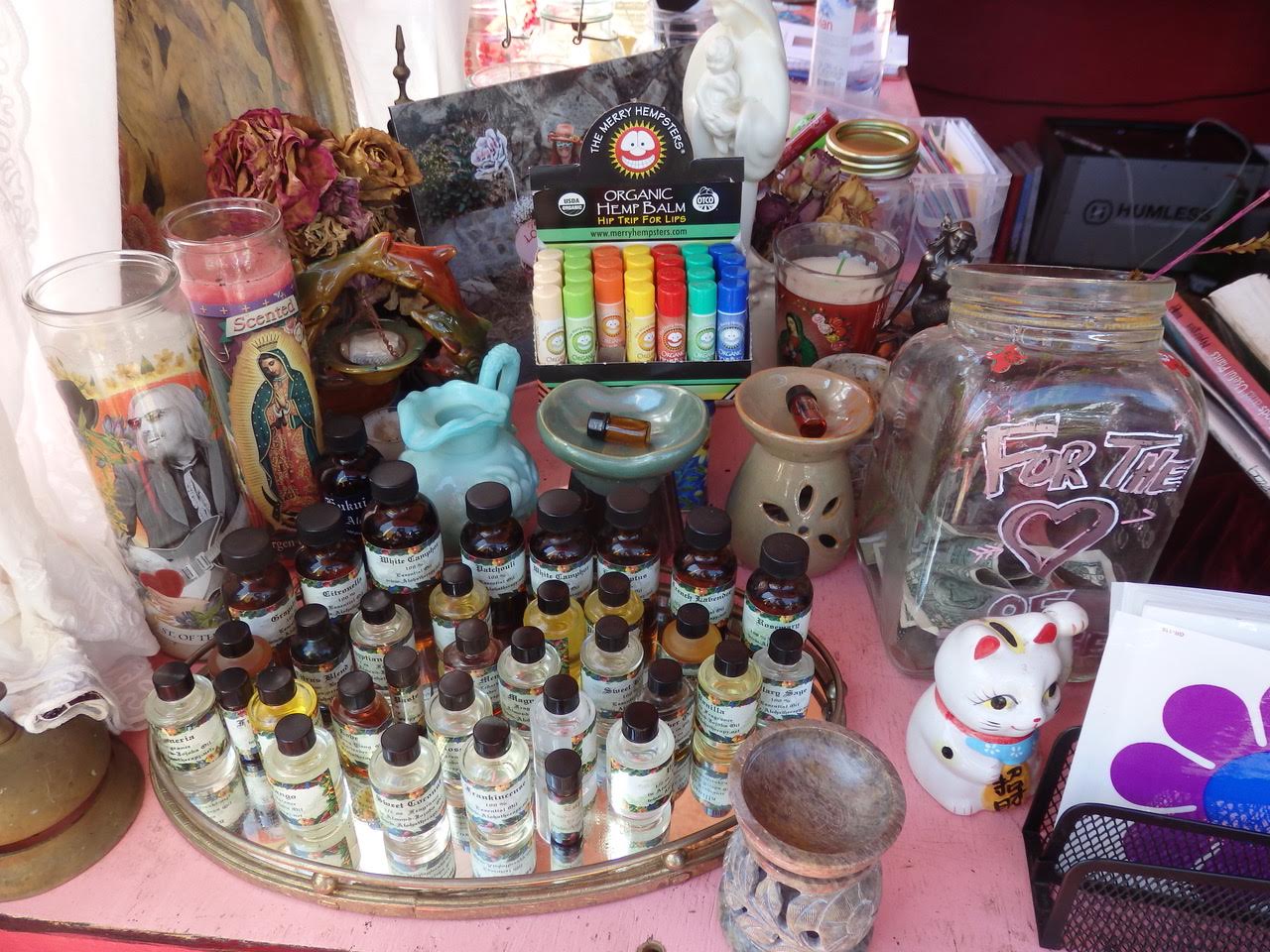 Gidget sells tinctures, seeds, medicinal herbs, teas and cards in addition to flowers and she deliver her flowers locally. Photo by Annemarie Donkin

A handmade Lilliputian fairy garden surrounds the shop. Always cheerful and full of love, Gidget displays her wares throughout the week and graces weddings, parties, and concerts with her beautiful flower creations on the weekends.

With her husband, Cecil, and their son, Prince, 23, she built this shop by hand. It has become a community gathering place and tourist draw situated just outside of Topanga Homegrown, the Waterlily Café, and Topanga Organic.

“I also sell seeds, flower seeds, and vegetables, and wonderful smoking blends such as Loosey Lu’s Herbal,” Gidget said, while arranging flowers. “I have tea pots along with tea blends, vintage tea sets. I also have other knick-knacks and really nice soapstone infusers for essential oils.”

THE FLOWER LADY OF THE CANYON

In this latest incarnation of “Gidget’s Topanga Adventures,” she was perhaps always destined to become the Flower Lady of the Canyon.

Gidget grew up in Southern California to entrepreneur parents, so for her, opening and running a business just comes naturally. After selling wares at Grateful Dead concerts in Southern California, Gidget left home at 17 and bought a one-way ticket to Hawaii. There, she developed an innovative product called “Seeds of Paradise,” where she germinated three varieties of palm trees in peat moss to grow at home right out of the box.

“I ended up getting purchase orders from about every store I went to,” she said. “Then a year later, Hawaiian Island Creations bought the business from me and now they distribute the trees worldwide.”

That sale, at age 21, allowed Gidget to remain in Hawaii for the next three years while earning a percentage of the sales. Later, she married and moved to Laguna during the height of the folk music era.

“When I moved back to Laguna, my husband and I then wanted to move up to L.A. My move to Topanga was all about Woody Guthrie, Will Geer of “The Waltons, and how he came up to this town and purchased land. I was so in love, I wanted to go to this Topanga place. It took only one drive up to the Health Food store and I said, ‘I’m not leaving, this is it.’ We found a house for rent at $350 a month and the rest is history.”

As an entrepreneur, Gidget produced concerts in the canyon for the next several years.

“In 1984, in Topanga I created Gidget Productions where, between ’85 and ‘86, I put on concerts with Pete Seeger, Buffalo Springfield, seven annual Reggae picnics, a Folk-Rock festival, a Hippy Dippy Trippy festiva,l and several other sweet events at Will Geer’s Theatricum Botanicum.”

At that time, Gidget started up her Abandon Love Fresh Flowers and strawberries at the Topanga Homegrown boxcar on the lot where Abuelita’s Mexican restaurant used to sit across from Pine Tree Circle. She also opened a vintage shop, naturally called “Clothes Line Saga.”

Always looking for new adventures, Gidget moved to Eugene, Oregon, where she bought a sweet little house in the country and opened up a vintage clothing shop called Weird Sisters. That was when she met her current husband, Cecil Zapata, and where they were married in June, 1994.

“We converted an old church into a coffee house,” she recalled. “We later moved to Hawaii and opened up a thrift shop called Treasure Island Thrift Shop, aka ‘TITS.’” Gidget and Cecil, an electrician, had fun with TITS before it was time to move on.

“We moved back to the mainland when Cecil’s mother was diagnosed with cancer, so we went to live in Portland, Oregon, where we converted, from the ground up, a Health Food Market,” she said. “This was insane!”

Cecil and Gidget later moved back to Eugene where she returned to vintage clothing with Weird Sisters and later, opened up her first hillbillyhip shop, “Which brought me back down to Topanga in 2010,” she said. “Where we not only sold vintage clothing, but did hundreds of live shows!”

In 2015, Gidget was diagnosed with bladder cancer and spent the next few years fighting the disease.

“This made me want to get back into flowers, so I began liquidating hillbillyhip and created Flower Power,” she said. “I have always loved flowers of all kinds. “

During her cancer fight, Gidget received support from the Topanga community, husband Cecil, and her four children, son Aven, daughters Deja Kai, and Emma Rain, and son, Prince. She has two grandbabies by Aven and his wife, Maryanne, who live in the San Diego area.

“My two grandchildren are the cutest little boys you have ever seen,” she gushed. “They are Knox, 2, and Boone is four months old. At Knox’s birthday party when he turned two years old, he started passing out his presents to his friends so they could open a present too!”

Her daughter Emma Rain is a teacher in Eugene, Oregon, and her youngest, Prince, is a photographer.

Always optimistic, Gidget sat on a garden bench on a lovely summer morning and reminisced about her life and feelings for her Flower Power shop.

“Basically, I think it’s just the happiness and warmth and positivity it brings,” she said. “The most positive thing is planting a seed and watching it grow into a real nice flower. This is all I want to do. I am truly in my element.”

One can certainly feel Gidget’s love of life as locals and visitors crowd around the shop perusing all of the delightful offerings and ordering bouquets to go.

“It feels right,” she said. “This is my love; I’m living the dream. Flowers are the happiest business. Check us out for events, weddings, parties, concerts, or create your vision. I love doing events and really want to be here forever and grow old here.”