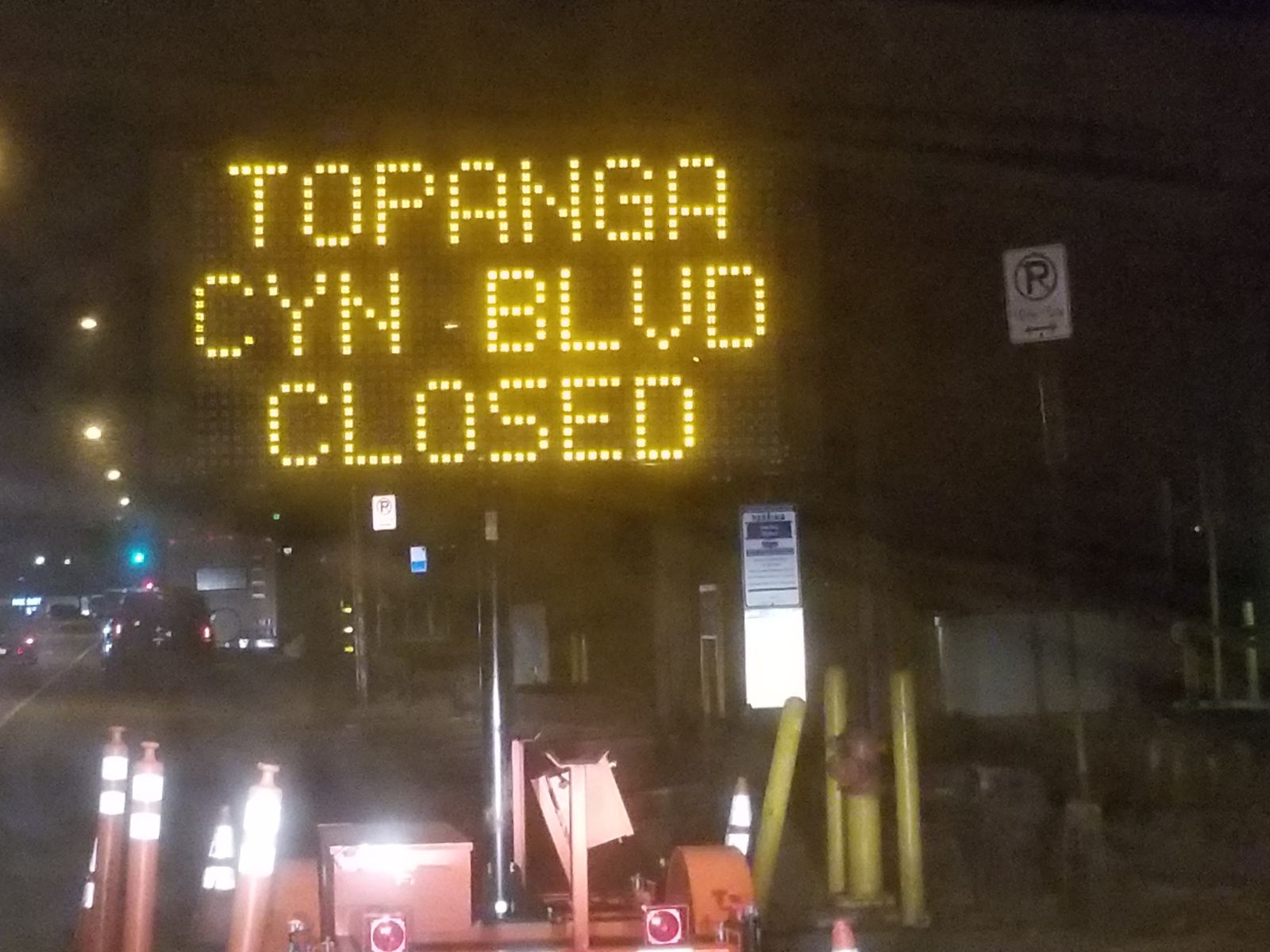 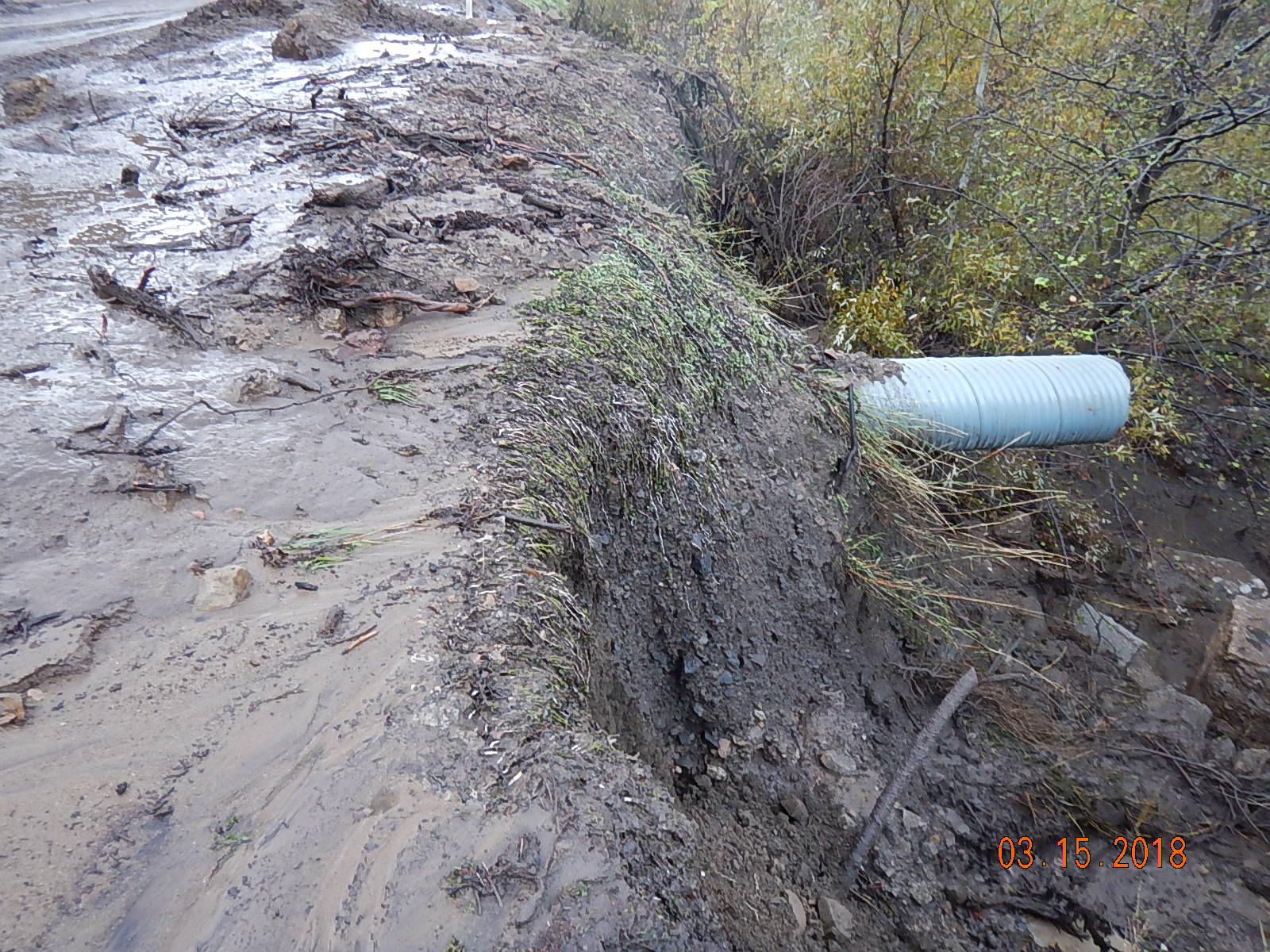 The creek embankment before restoration. Photo by Michal Dipsia 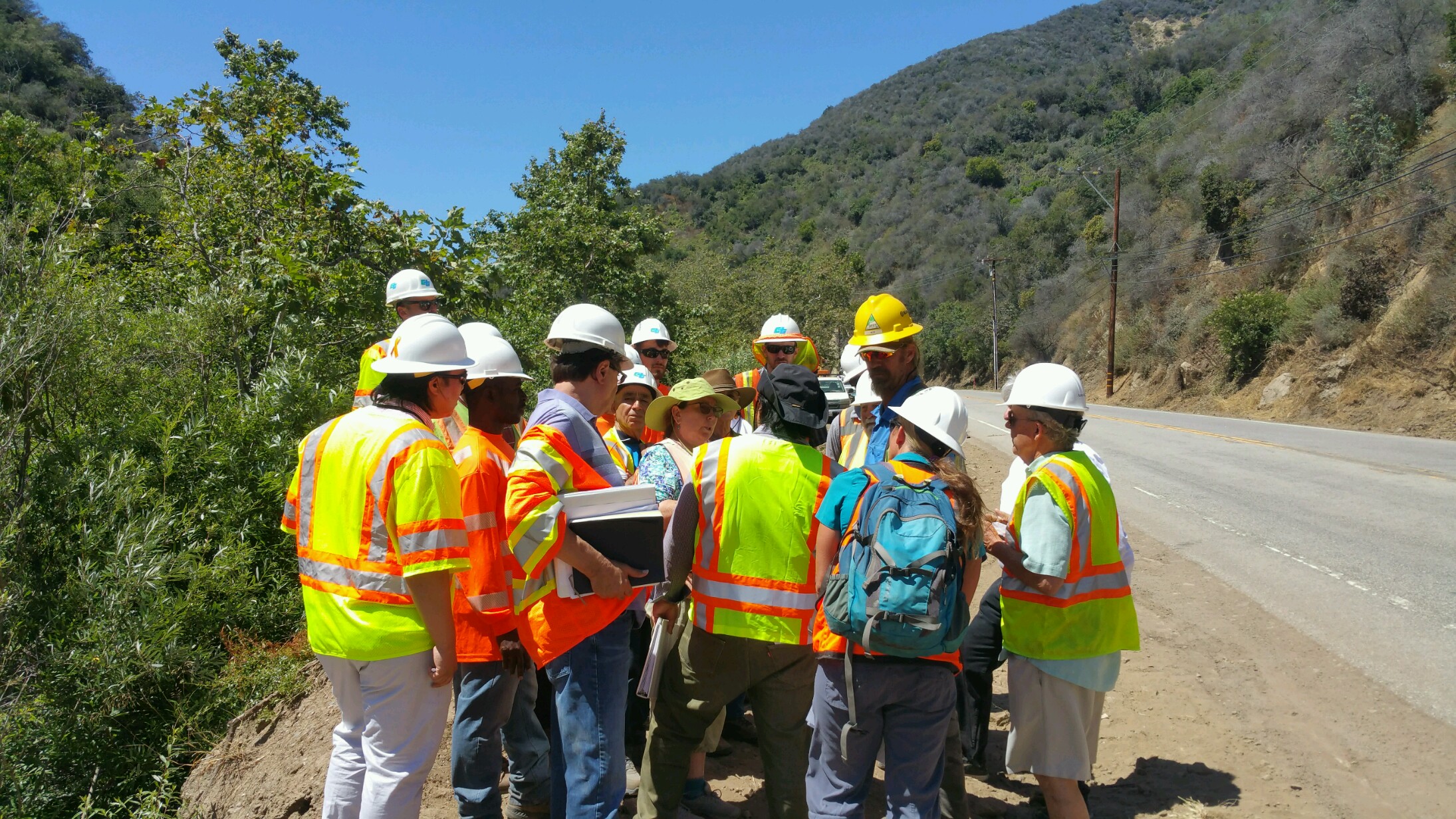 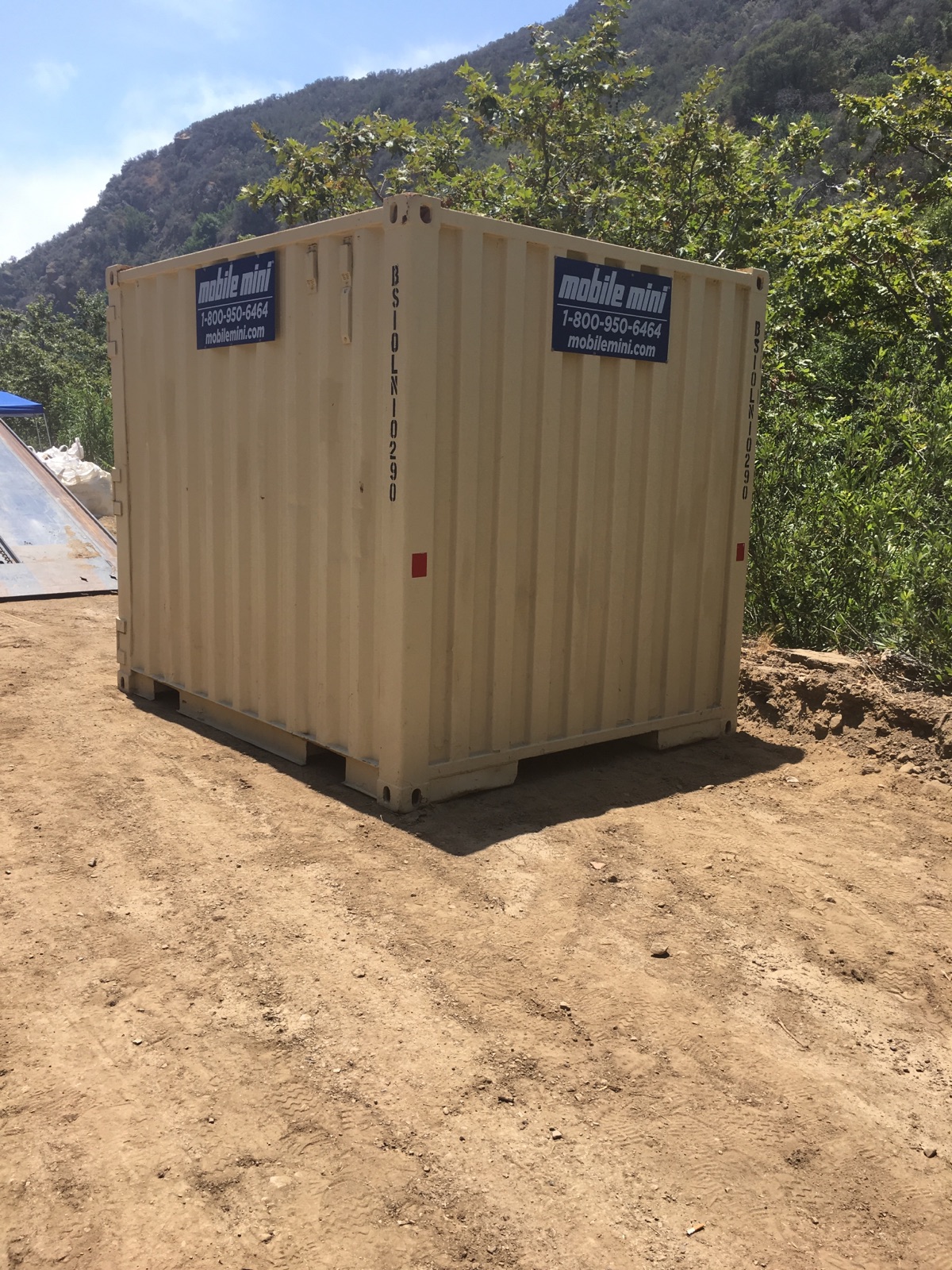 Workers’ boots and clothing must be free of contamination and were stored in a shed when not in use. Contractor’s equipment had to be sterilized as well. Photo by Michal Dipsia 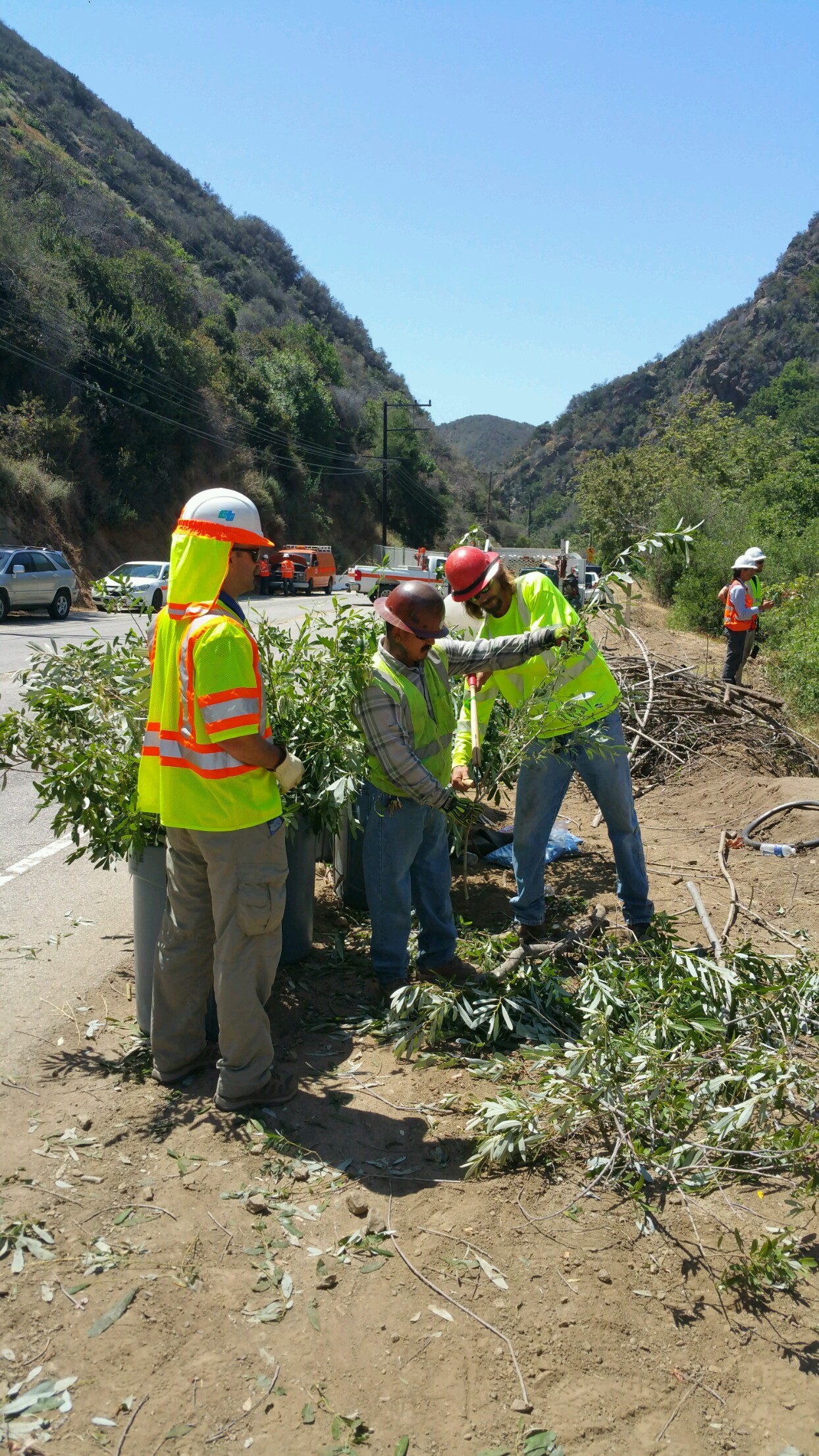 Some trees and bushes had to be removed and willow branches were cut and saved in buckets at RCD for replanting. Photo by Michal Dipsia 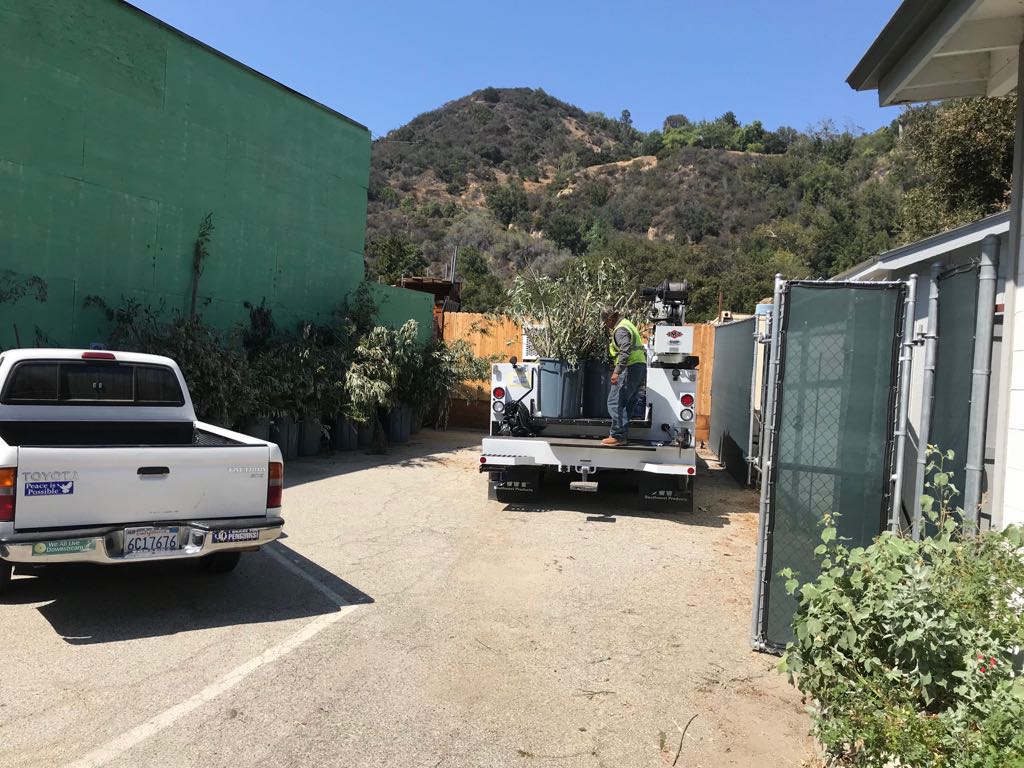 Native seeds harvested from native shrubs and bushes were also planted on the restored bank. Union Engineering will water the plants for 60-90 days until the plants are established. Photo by Michal Dipsia 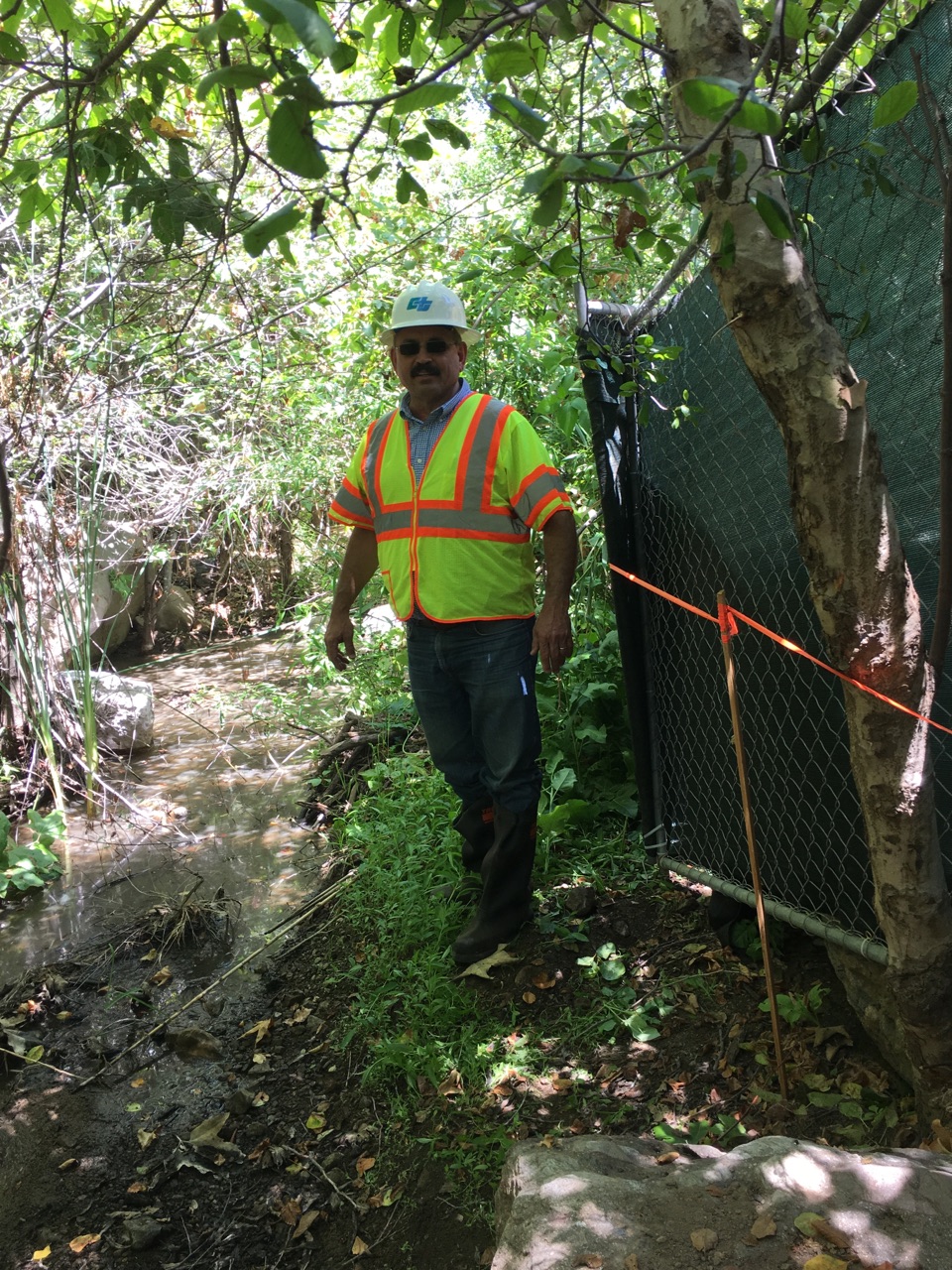 Mike Dipsia in the creek where a survey line (orange tape) identified the project limits along the perimeter of the creekbed where fencing was installed. Fences were layered with silt cloth, then bags of gravel placed at the fence line to protect the creek from accidental debris contamination from the work area. Photo by Michal Dipsia 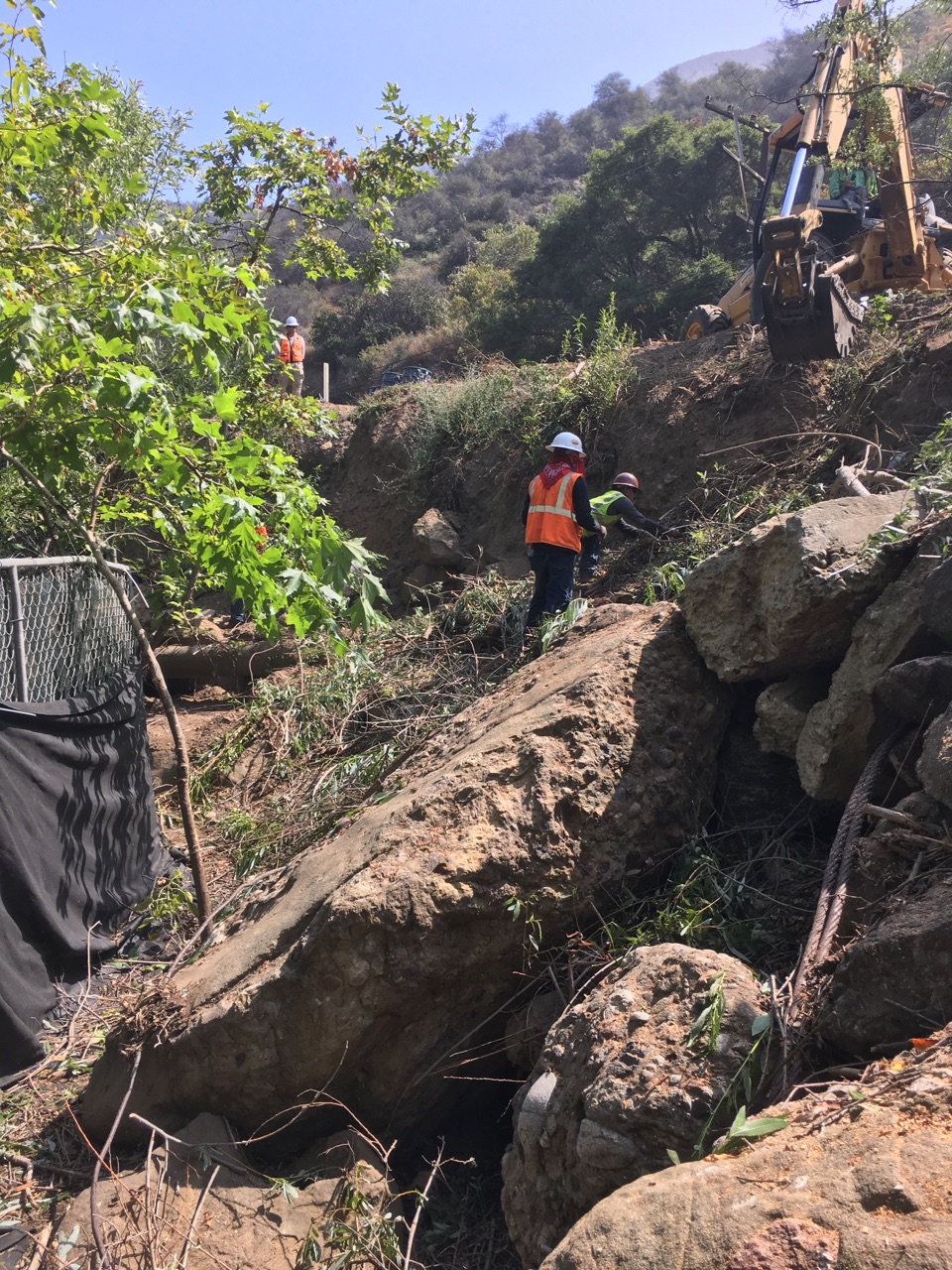 In came the big guns to grade and clear the slope before placing the rocks. Photo by Michal Dipsia 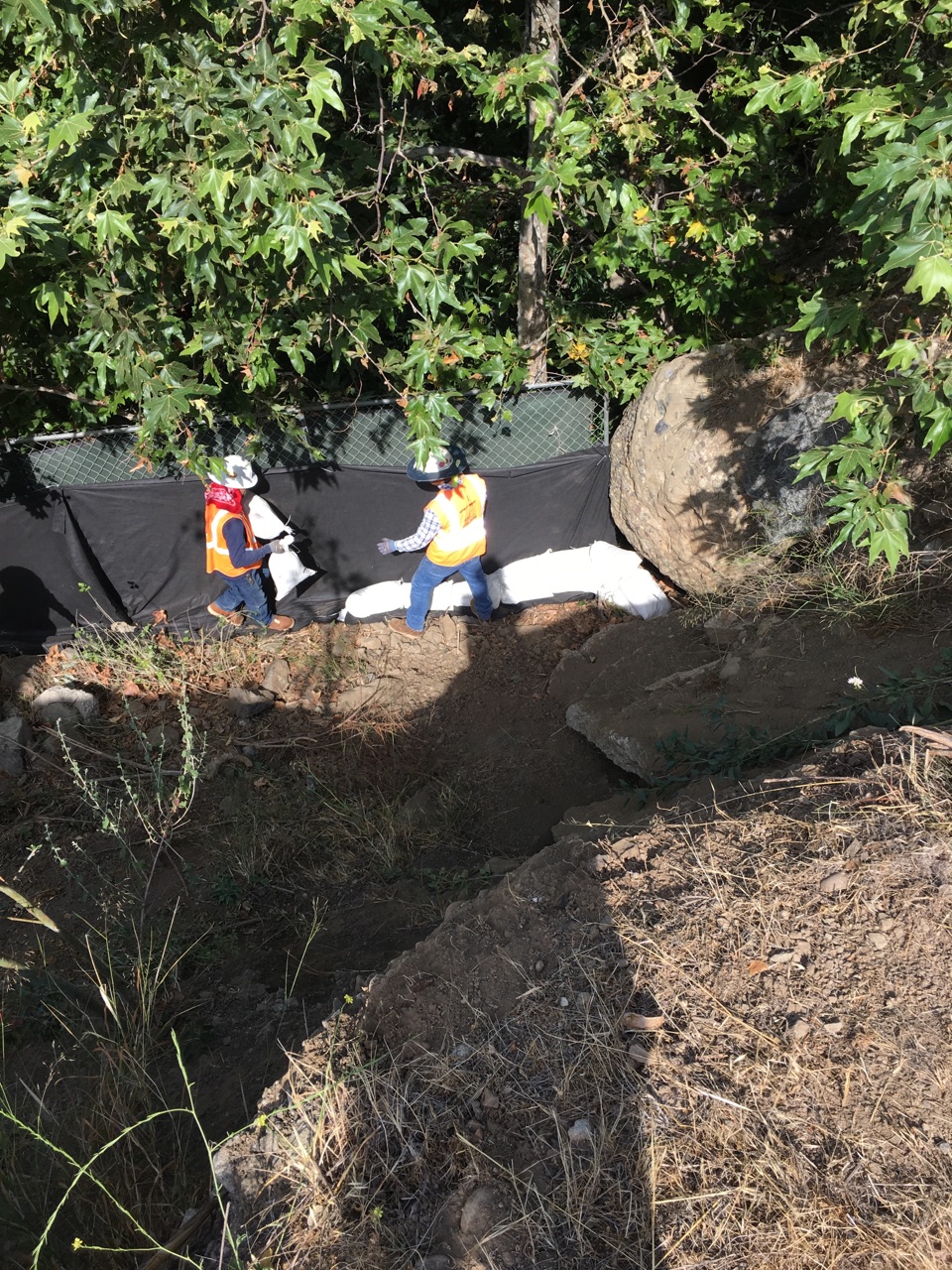 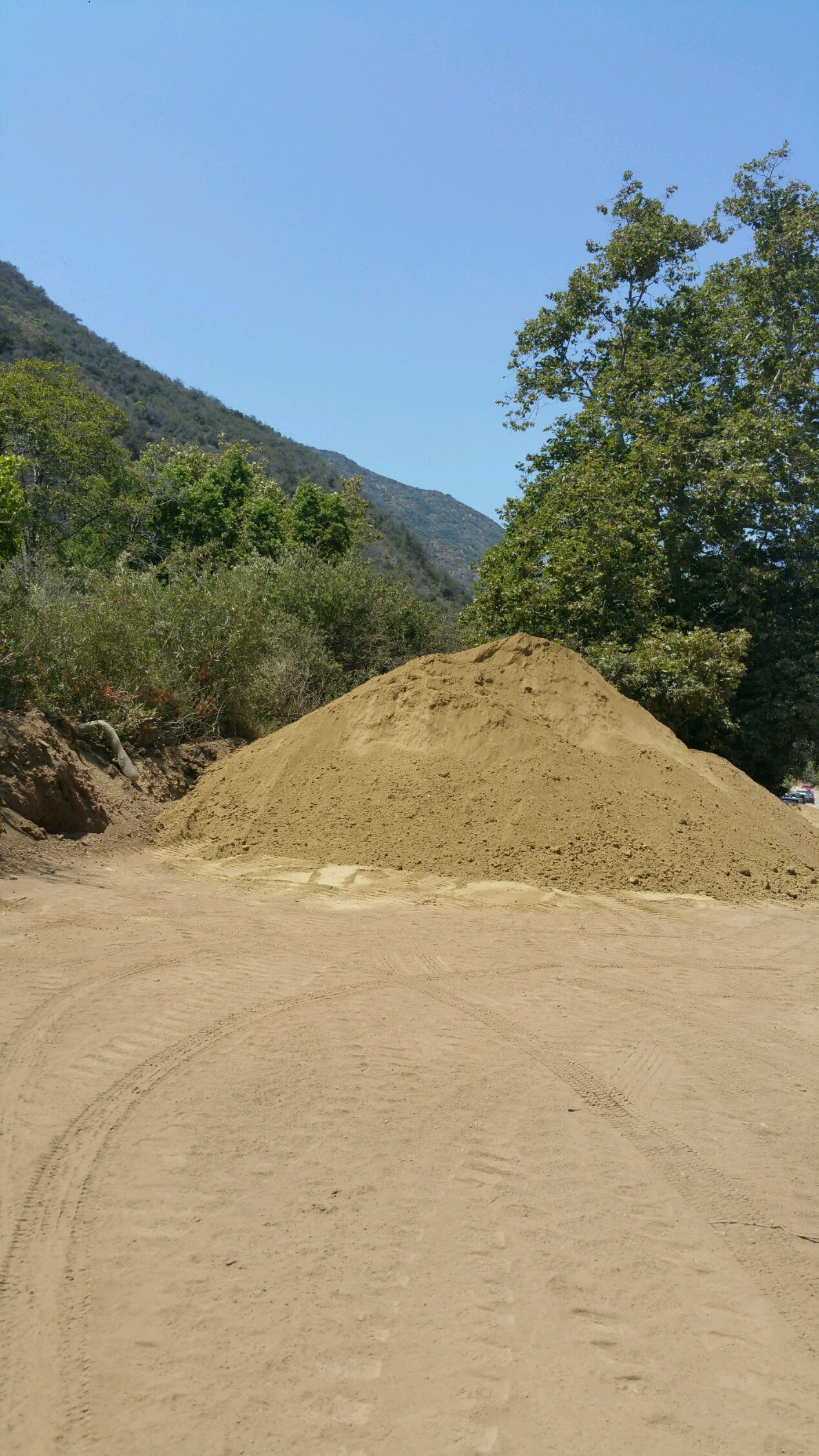 300 cubic yards of fill material was used to fill the voids in between the rocks. Photo by Michal Dipsia 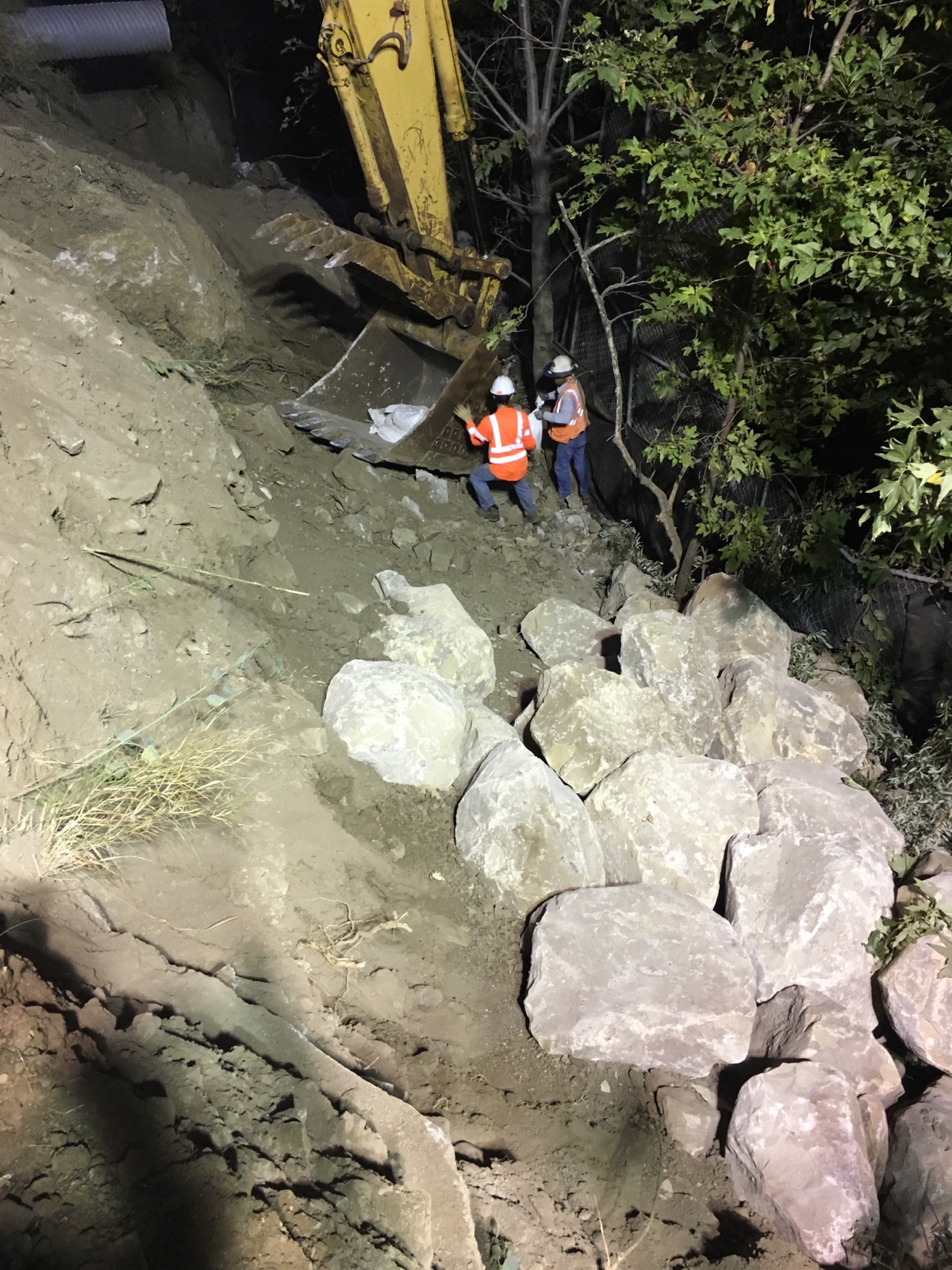 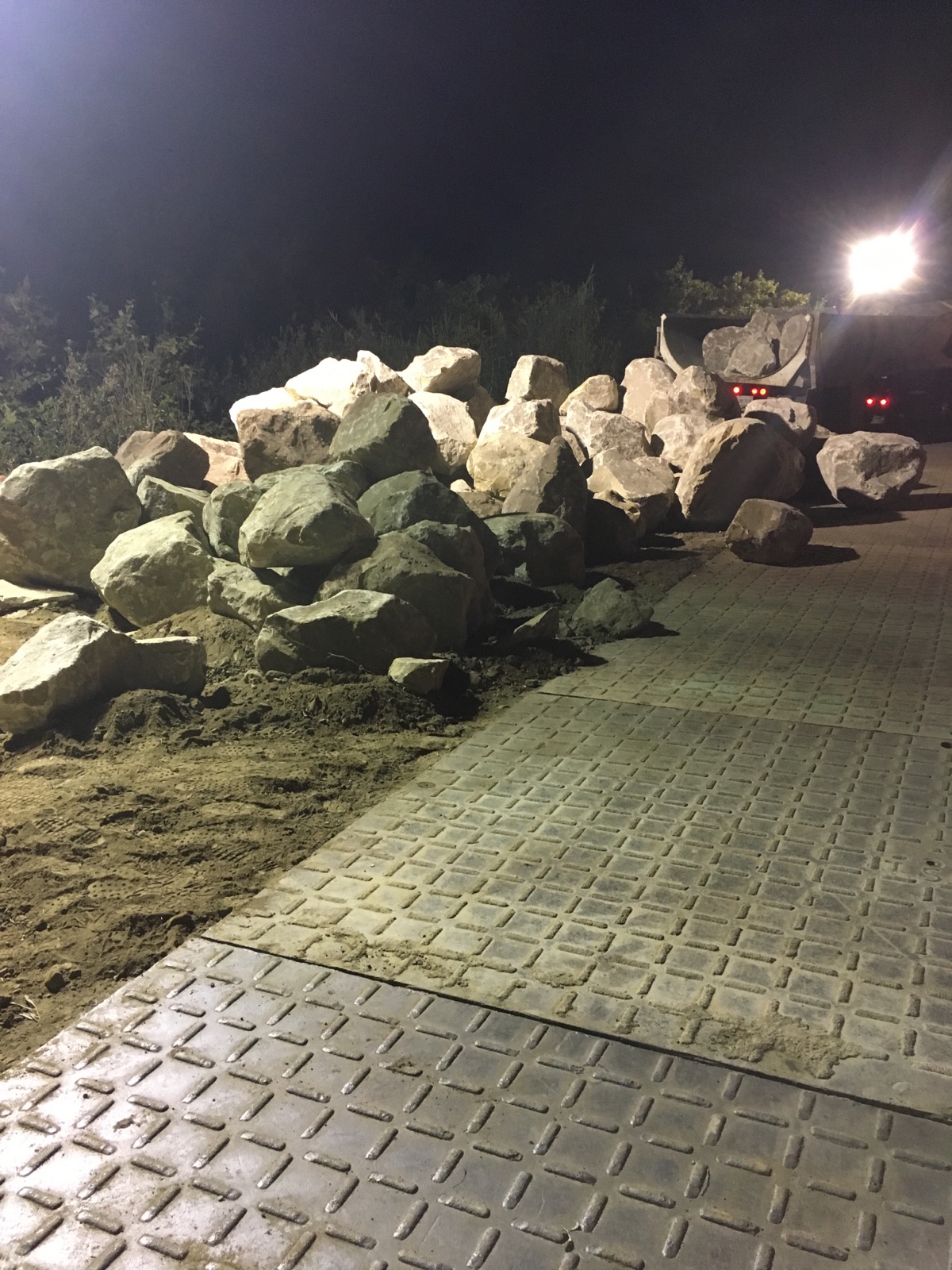 1,000 tons of rock, each weighing between one and four tons, were trucked to the site. Photo by Michal Dipsia 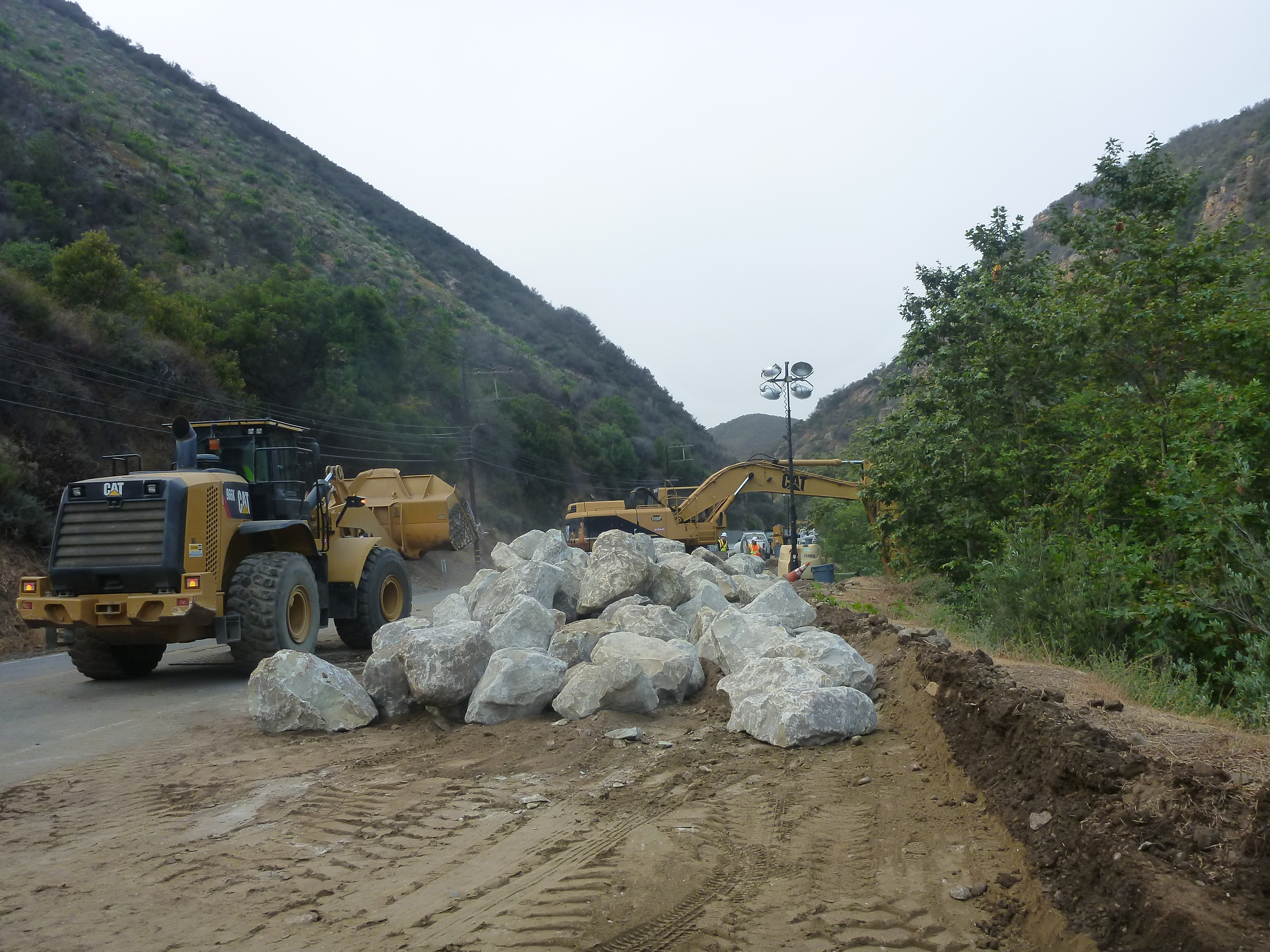 Placing rocks on the slope. Photo by Michal Dipsia 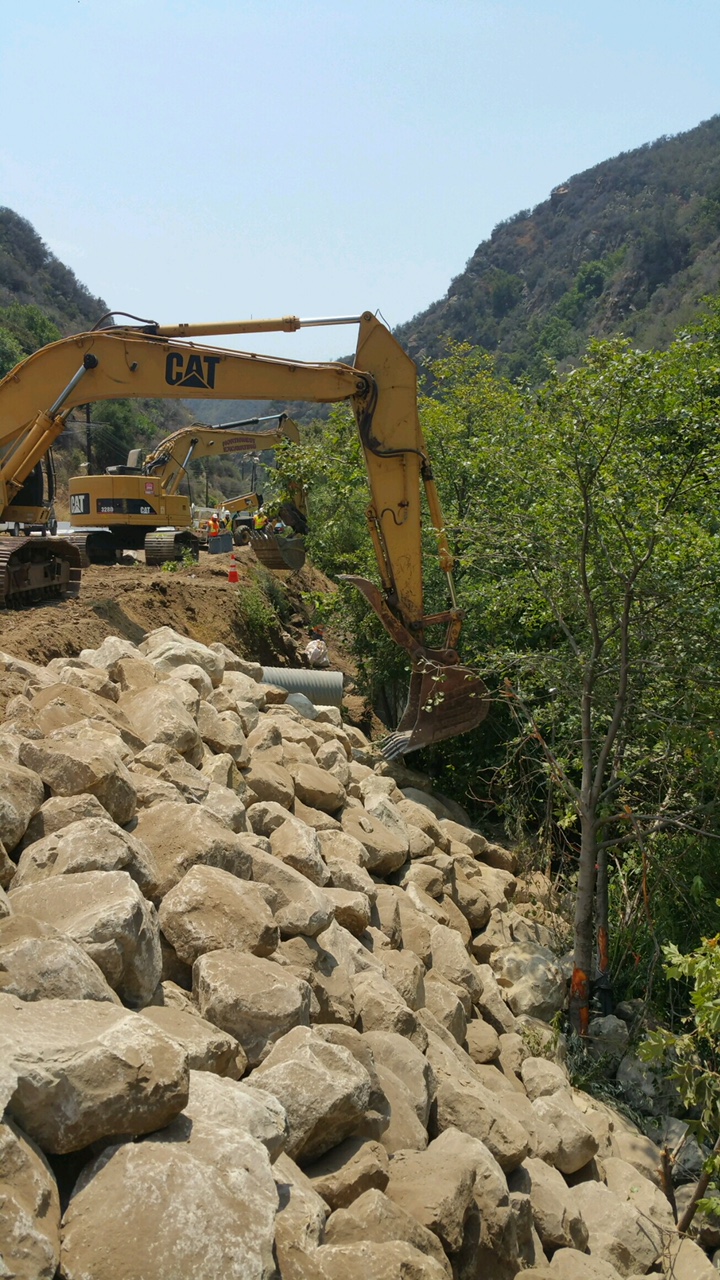 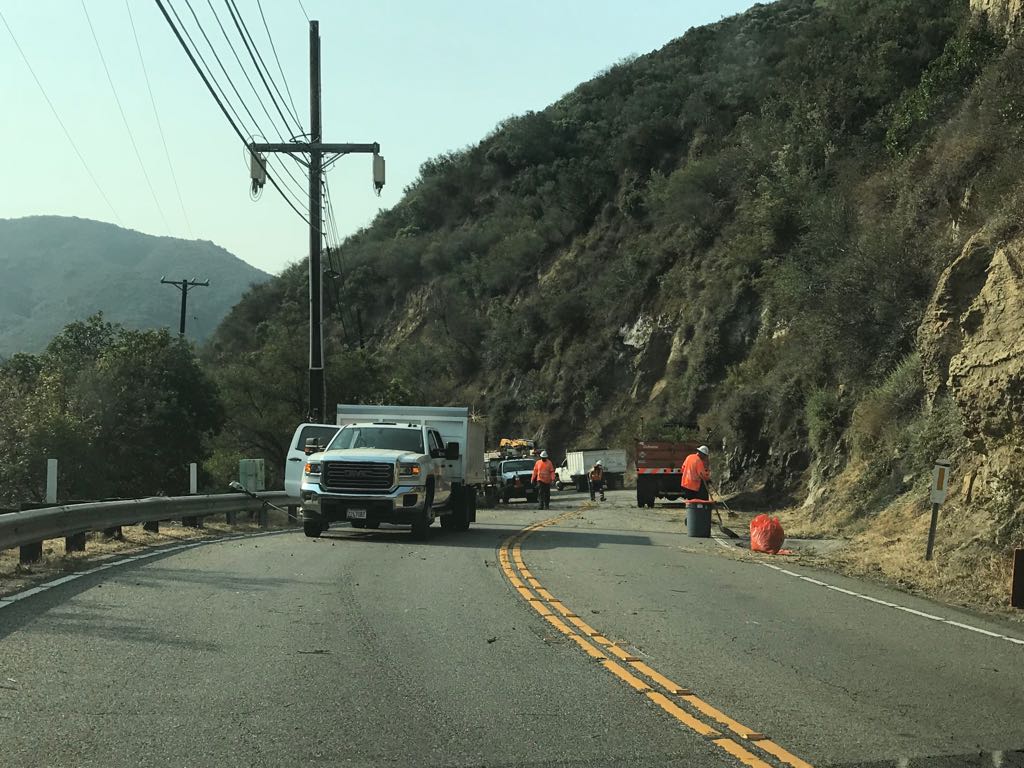 Caltrans’ dedicated Maintenance crew, led by Deputy of Maintenance Deborah Wong, took advantage of the 55-hour closure. With an army of more than 70 workers they cut weeds, trimmed back tree branches, bushes, and shrubs, fixed signs and guard rails, and picked up trash and debris. Photo by Michal Dipsia 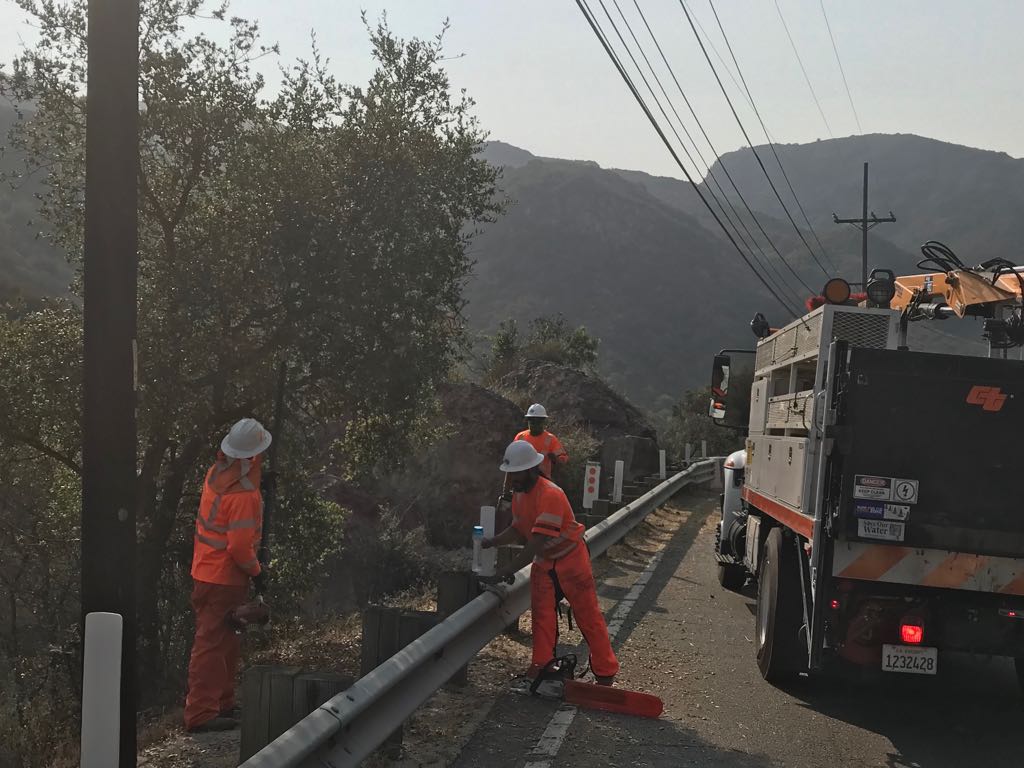 At the end of the restorative work, maintenance crews brought in the big highway sweepers and swept the work location before opening it to traffic. Photo by Michal Dipsia 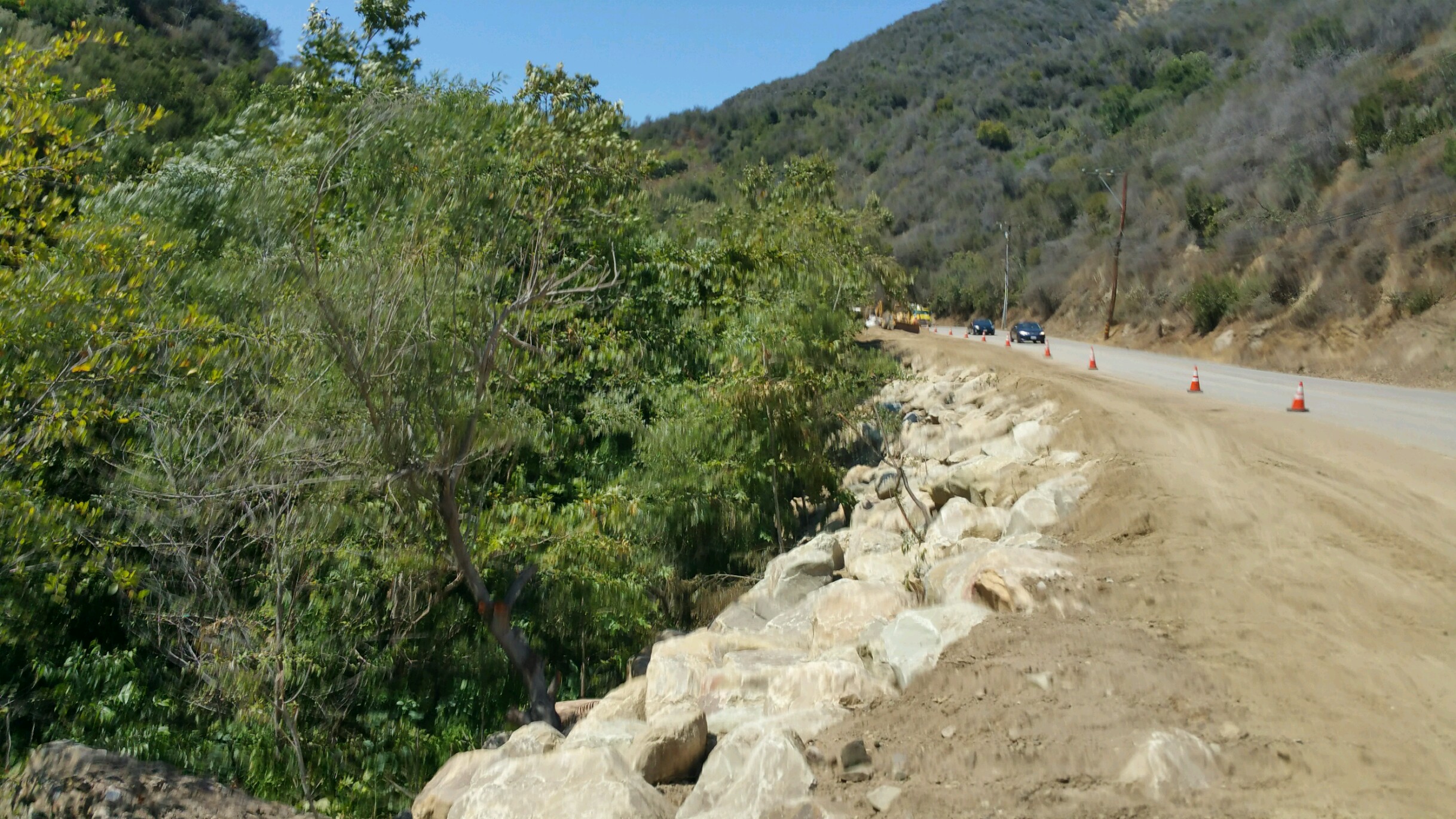 Road’s open! In less than 43 hours, the entire hillside embankment was restored. Photo by Michal Dipsia 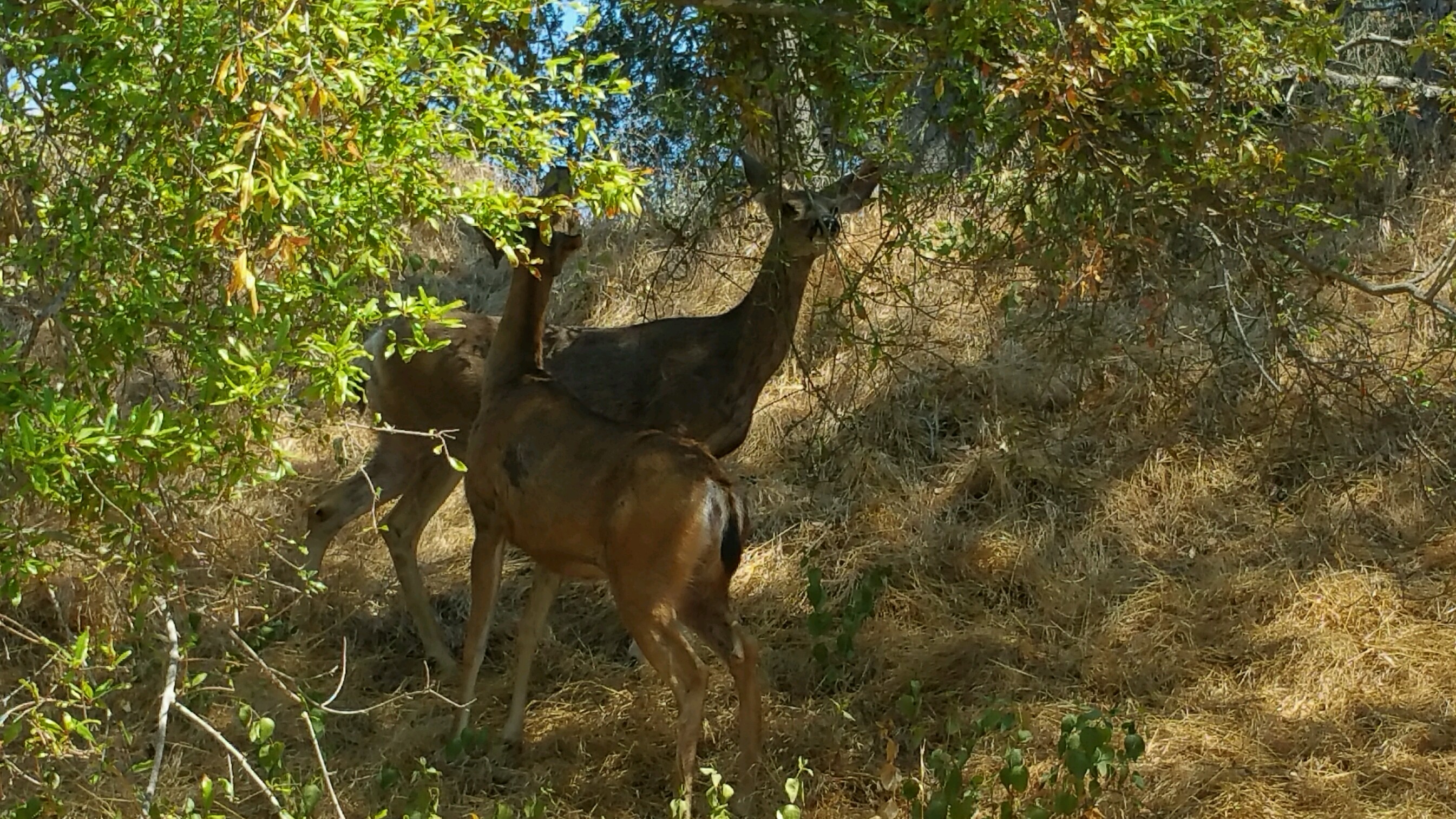 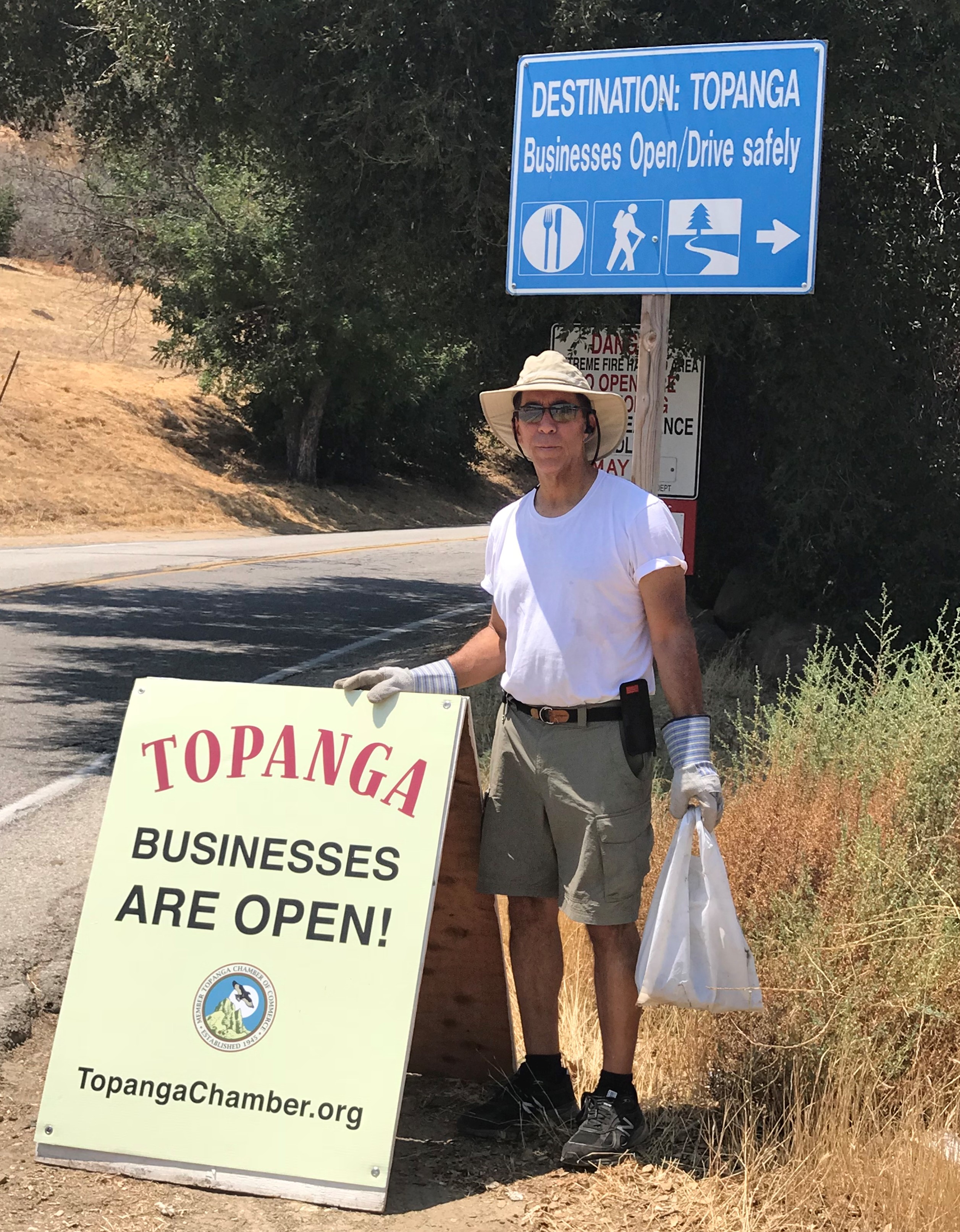 Ron Fomalont, President of the Topanga Chamber of Commerce, on the job supporting local businesses affected by the road closure. Photo by Ari Fomalont

WHILE MOST OF US WERE SLEEPING AND OTHERWISE ENJOYING (OR NOT) THE RESULTS OF ANOTHER ROAD CLOSURE, LOWER TOPANGA CANYON BOULEVARD WAS A HIVE OF ACTIVITY FROM JULY 24-29.

While most of us were sleeping and otherwise enjoying (or not) the results of another road closure, lower Topanga Canyon Boulevard was a hive of activity from July 24-29.

Responding to January’s fire in the area, heavy rainfall in February, and mudslides in March, Caltrans engineers, spearheaded by Sr. Construction Engineer Michael Dipsia, the contractor, Union Engineering, with biologists on hand, set about restoring the creek that had been severely impacted by the mudslide

According to Rosi Dagit, Sr. Biologist for the Resource Conservation District (RCDSMM), when the hillside slid last March, it delivered enough mud to bury 1,000 meters of the creek. This project would reinforce the banks and restore those parts of the creek at mile markers 1.0 and 1.2.

Crews had four days of shoulder closure to haul in equipment and store materials, and a 55-hour full closure over the weekend—beginning Friday, July 27 at 10 p.m. and ending Monday, July 30 at 5 a.m.—to complete the job. Despite some skepticism, they completed the project 12 hours under schedule and Highway 27 opened around 6 p.m. on Sunday night, July 29.

The Messenger Mountain News was fortunate to witness some of the extensive planning that is required for a project of this size and sensitivity. Any creek mitigation has stringent requirements to protect the creek from contamination. Workers’ boots and clothing must be free of contamination, as well as the contractor’s equipment.

Caltrans biologists, in collaboration with Rosi Dagit, laid a survey line that identified the project limits along the perimeter of the creekbed where fencing was installed, then layered with silt cloth and secured with bags of gravel at the fence line. Trees and bushes were removed to make way for the boulders and cuttings from willow trees were saved and planted in the soil among the boulders along with seeds harvested from native shrubs and bushes that, once established, will prevent erosion of the bank.

If you are driving by of a morning, you may see Union Engineering watering the new banks five days a week for the next 60 to 90 days.

The community owes great thanks to Michael Dipsia, who has been an outstanding representative for Caltrans on construction activities along Topanga Canyon Boulevard over the past two years. In this case, he kept the Topanga community informed daily of the progress. We can also appreciate the leadership and coordination of the many agencies required to complete such a task.

In his own words and photographs, Dipsia chronicled the process, in particular, the unique challenge of restoring a creek.

THANK YOUS ALL AROUND

There are many thanks to go around. Michael Dipsia acknowledges his “Resident Engineer Zarif Saykali and “all my construction team who dedicated this weekend for the delivery of this project, the great teamwork and help from our Environmental Stewards, our Traffic team, our Geologist Gustavo Ortega, our Contractor, Union Engineering, LA-DPW, CHP,  L.A. County Supervisor’s office, Susan Ng, District Director for the West Valley and Mountain Communities, and Timothy Lippman, Planning Deputy, who as part of the planning team works on land issues under the Department of Regional Planning, arranged for the general meeting with the key players on this project so that all questions were answered.”

“To all, I want to say we are one team and together we made it happen. To the Topanga Community, thank you for understanding Caltrans’ efforts to keep the highway safe. Great people, great community.”

Recognizing the financial impact on local businesses, Susan Ng also acknowledged Roger Pugliese and Joseph Rosendo for advocating that “Topanga Town Open” language be included in all the signage. Ng also acknowledged Rosi Dagit for working countless hours (actually, 23 hours) providing guidance to Caltrans and the contractors, to ensure the repair wouldn’t impact plants and fish in the creek.