The Santa Monica Mountains back country is home to the highest peaks in the range, including 3111-foot-tall Sandstone Peak. The trails in this area offer spectacular mountain and ocean views. Photos by Suzanne Guldimann 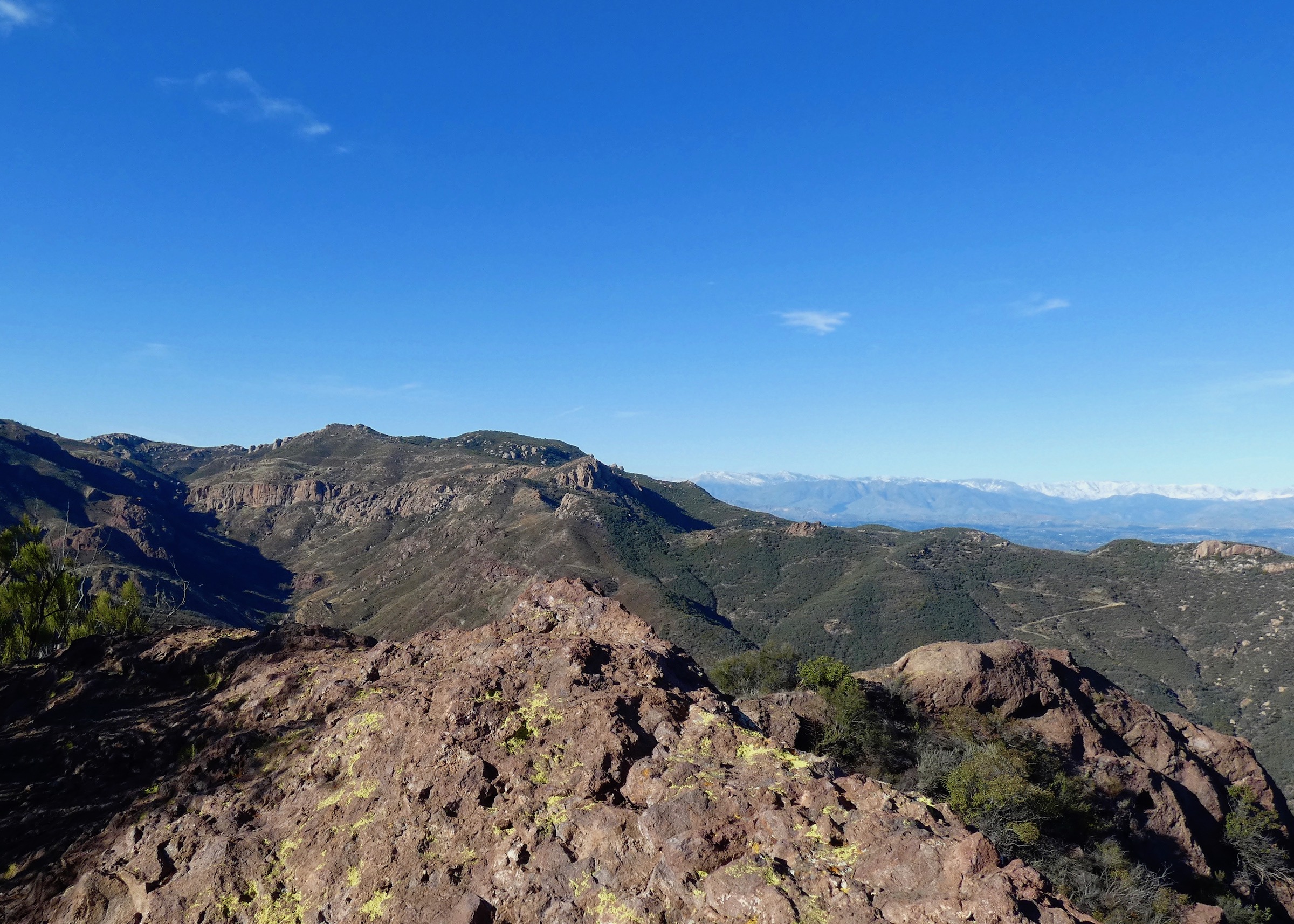 Hidden much of the year in coastal fog, the western Channel Islands appear like a mirage on a clear winter day. This archipelago is actually part of the Santa Monica Mountain range, separated from the mainland but created by the same geologic processes. 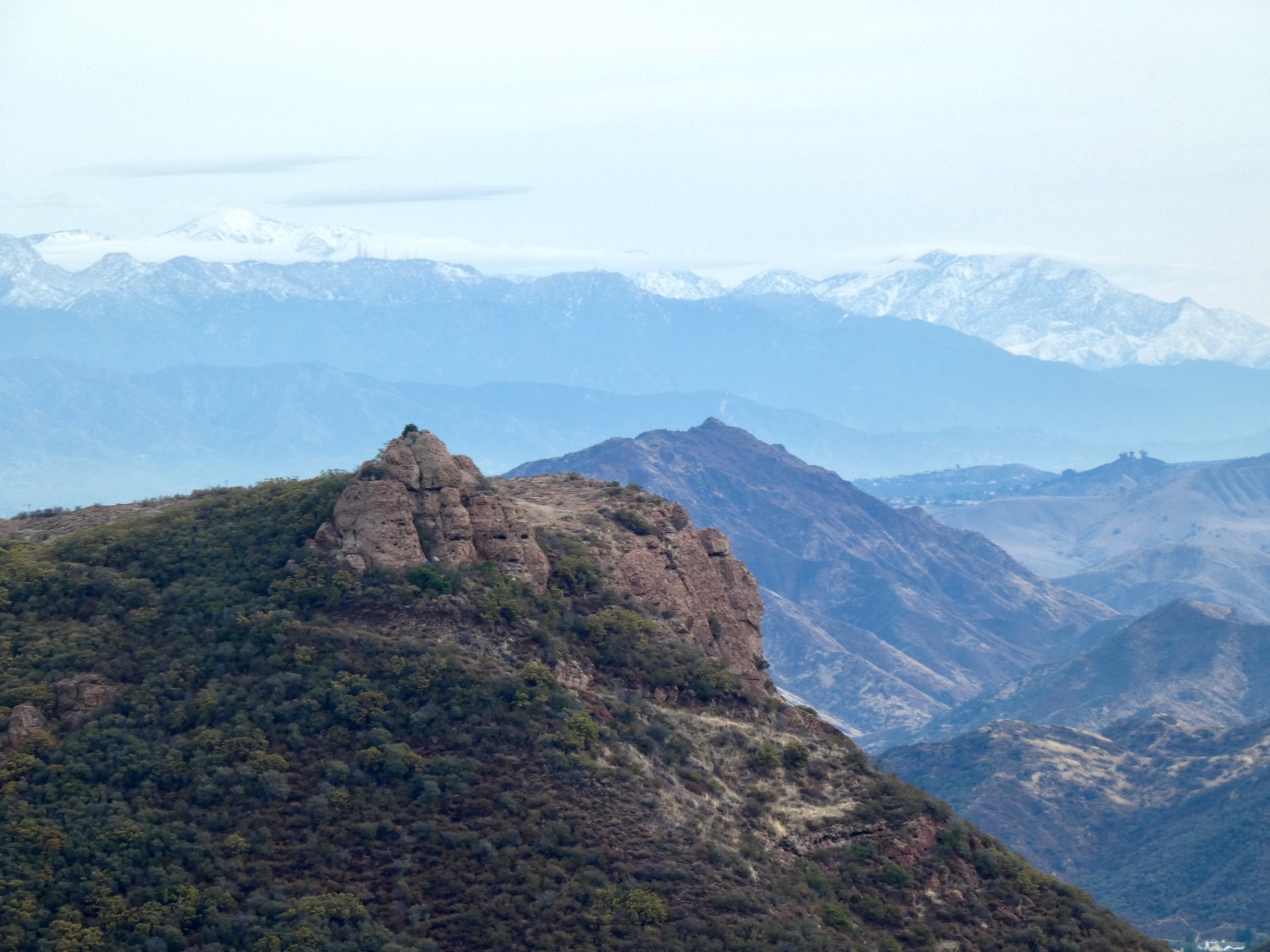 The National Park Service’s Mishe Mokwa trail winds along the edge of Carlisle Canyon, and offers stellar views of the distant snow-covered San Gabriel and Ventura County Mountains on a clear winter day. 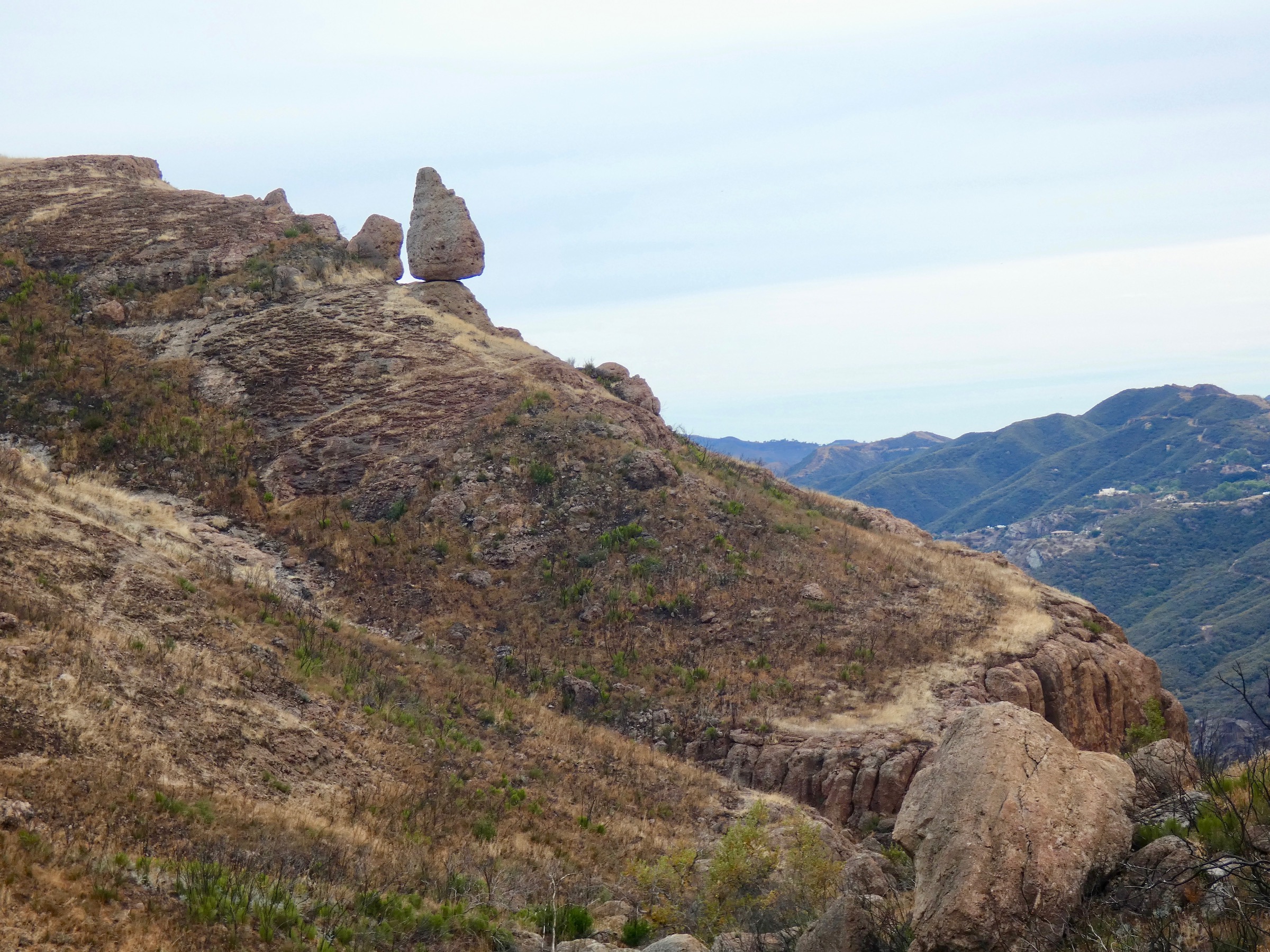 Balanced Rock is one of the star attractions of this part of the Santa Monica Mountains National Recreation Area. Like nearby Sandstone Peak, this massive boulder is part of a 13-15-million-year-old volcanic complex. 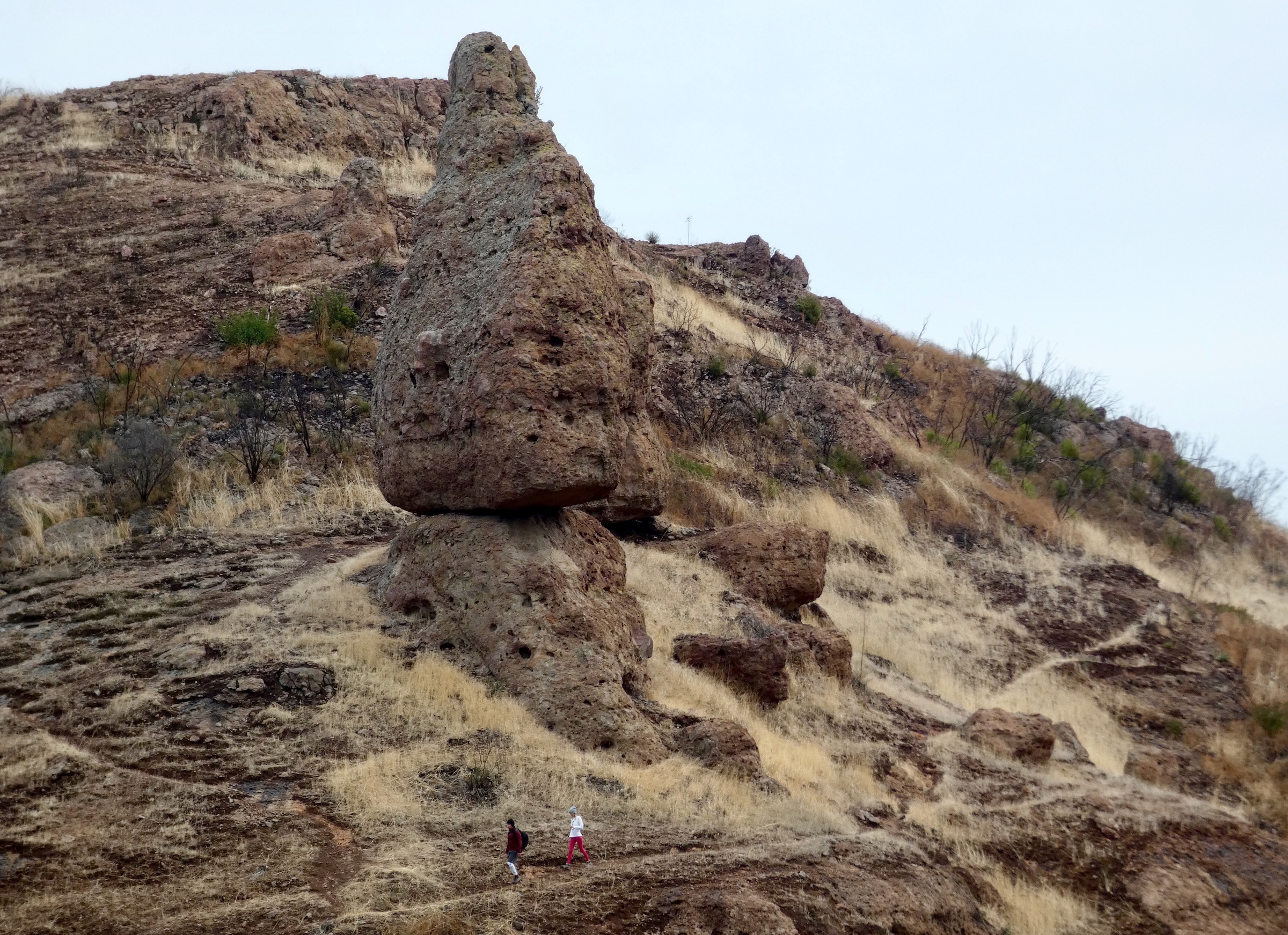 A close-up of Balanced Rock, with hikers for scale. 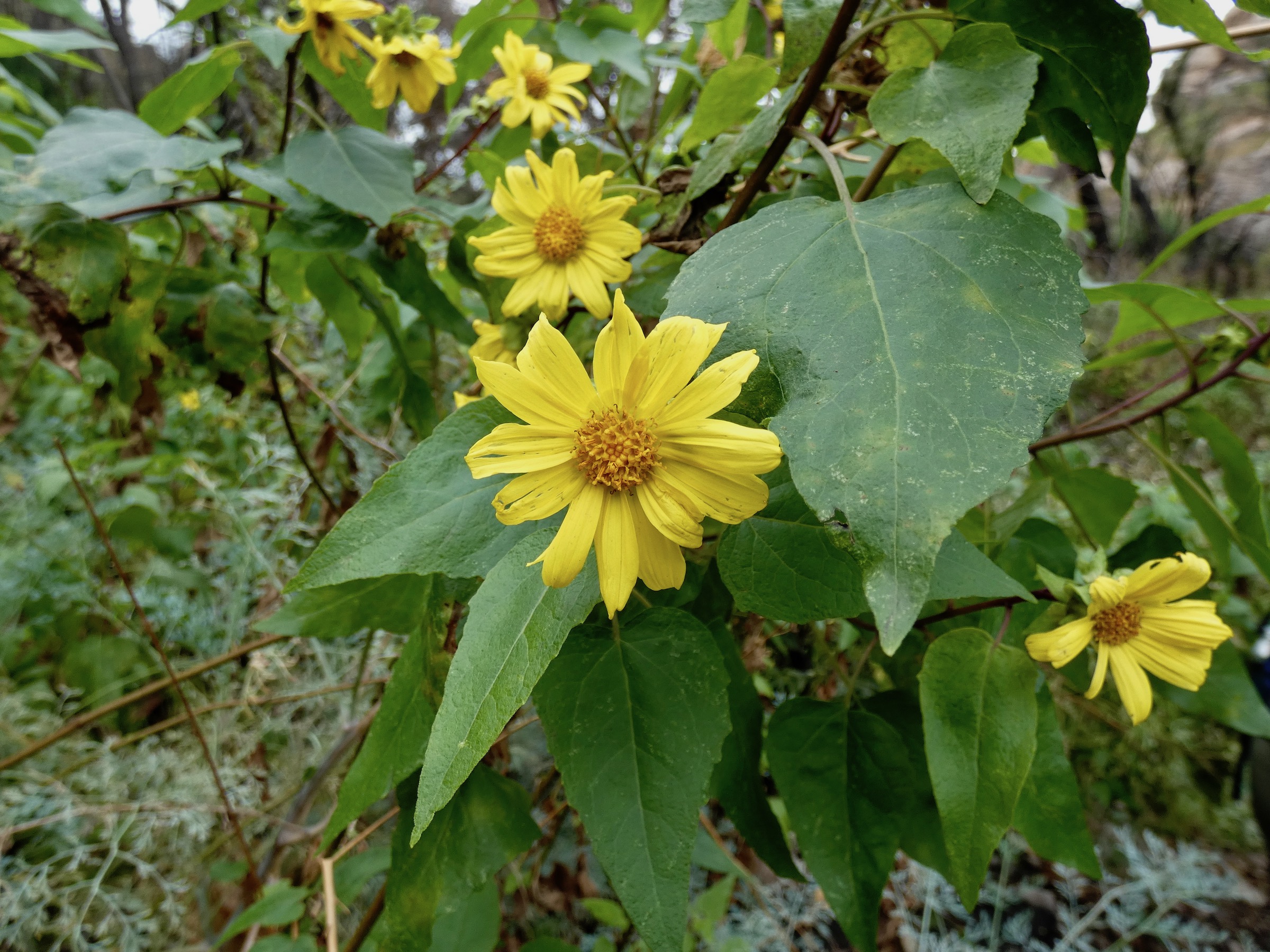 Even in midwinter there are wildflowers. These canyon sunflowers were blooming in a sheltered riparian area. 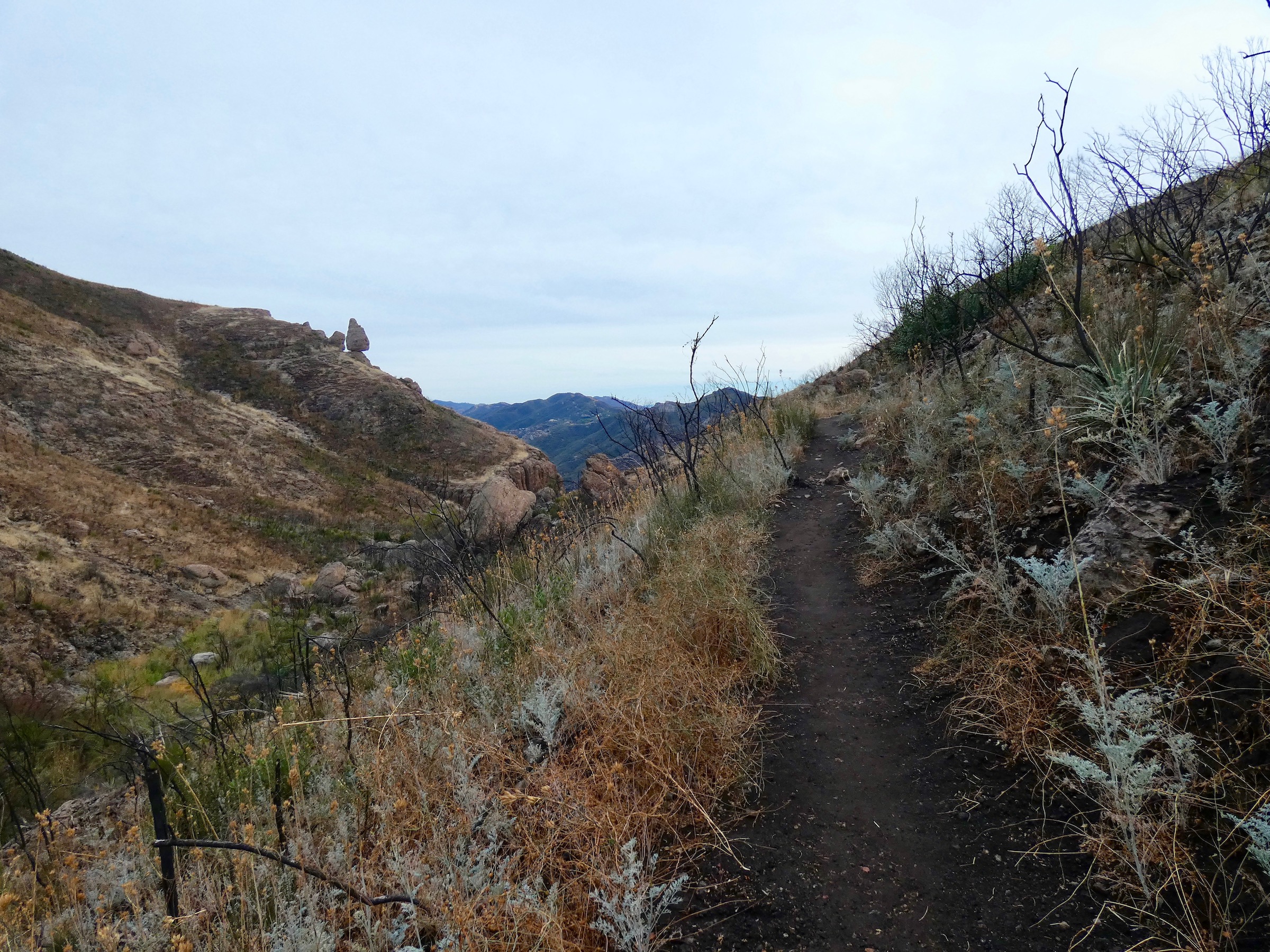 Much of the Sandstone Peak area burned in the Woolsey Fire. Mishe Mokwa trail has less shade due to the fire but it offers an opportunity to see unusual wildflowers like the gray green plants shown here, a fire-following member of the poppy family called ear drops or white bleeding hearts, which only appear after a wildfire. 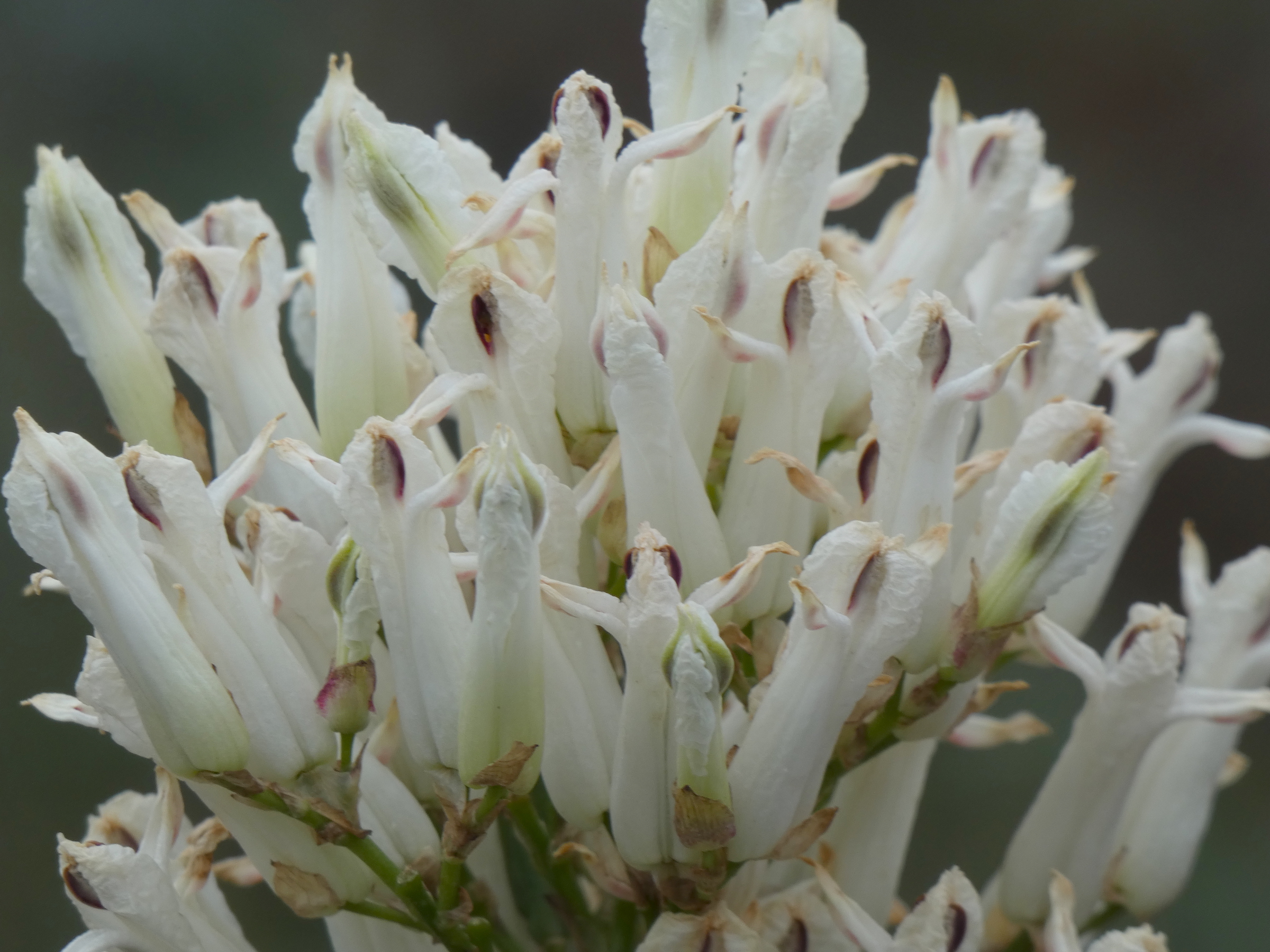 An earlier (or late) bleeding heart flower. This member of the poppy family smells like vanilla spice and only blooms after a wildfire. Its seeds can survive for decades in the soil, until conditions are right for germination. 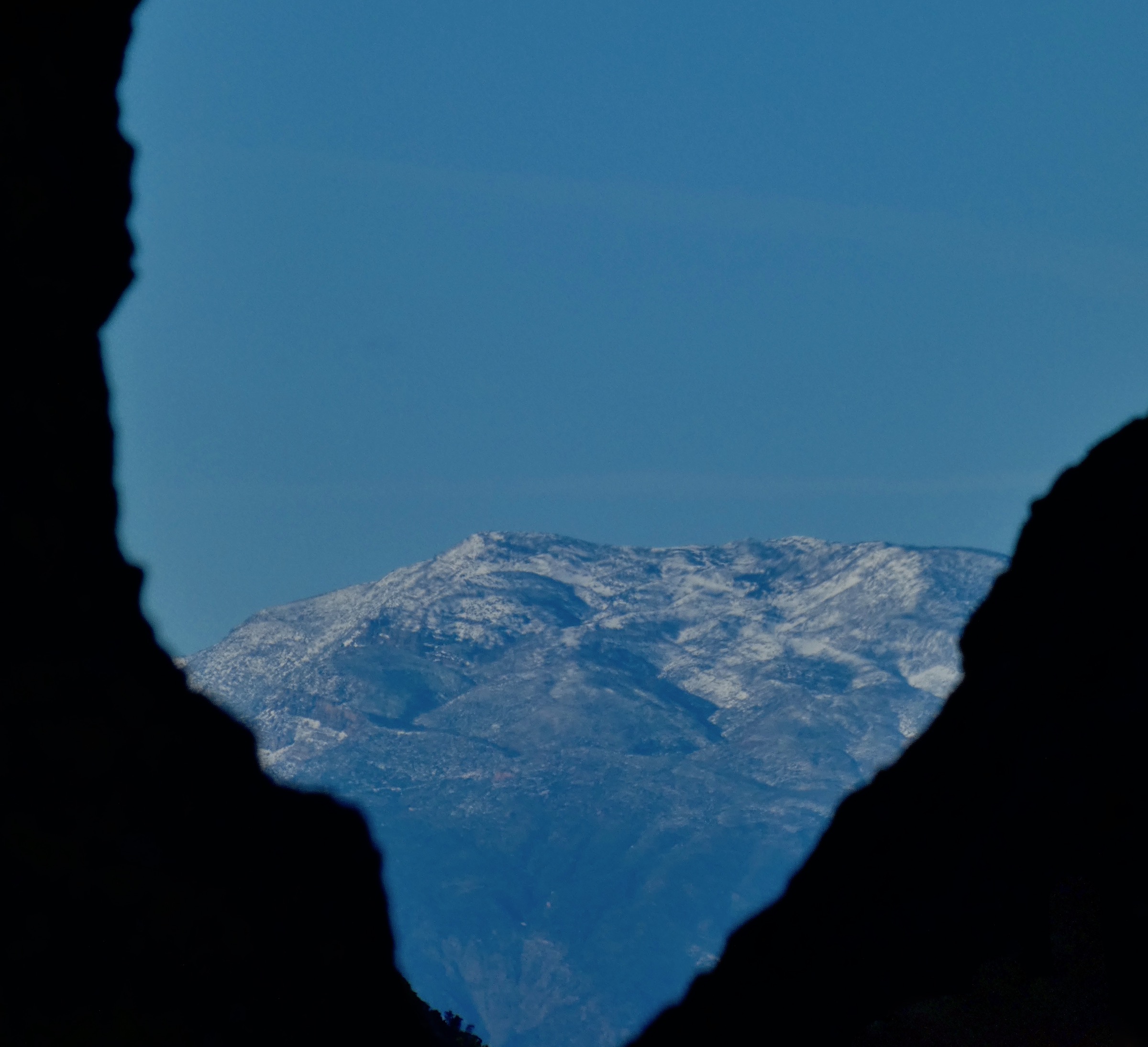 The Messenger Mountain News visited Mishe Mokwa trail right after the first major winter storms and were treated to a 180-degree view of snowy mountains stretching from the TopaTopa Mountains above Ojai to Mount Baldy, beyond the City of Los Angeles.

A Hike in the Santa Monica Mountains Backcountry offers an uplifting start to the New Year. Above, hidden much of the year in coastal fog, the western Channel Islands appear like a mirage on a clear winter day. This archipelago is actually part of the Santa Monica Mountain range, separated from the mainland but created by the same geologic processes.

A hike in the most mountainous and highest part of the Santa Monica Mountains National Recreation Area (SMMNRA) may be just the ritual needed to shake the dust of 2019 off and embrace the new decade.

The early settlers faced a hard life in lonely country. Amenities like paved roads, water and power didn’t arrive in the more remote corners of the district until well into the 20th century. The remoteness that made life difficult helped deter the kind of wide-scale development that has fragmented other parts of the mountains.

Many of the original homesteaders were burned out during a series of wildfires in the 1920s and 1930s and were later bought out by the Los Angeles Exchange Club, a group of wealthy “gentlemen farmers” who consolidated more than 1000 acres for a weekend retreat in the solitude of the mountains.

In 1949, this group donated the most rugged and scenic part of what they named Circle X Ranch to the Boy Scouts. Today, the National Park Service (NPS) oversees 1,655 acres that contain the highest peak in the Santa Monica Mountains—3,111-foot-high Sandstone Peak, and some of the most beautiful and scenic trails in the entire National Recreation Area.

The distinctive rock formations in this part of the local range, including Sandstone, Exchange, and nearby Boney Ridge, are volcanic rock—part of the Conejo formation that formed under the ocean around 13-15 million years ago.

Mishe Mokwa Trail is the most popular destination in this part of the National Recreation Area, and it is easy to see why. There is a sense of true mountain wilderness here, of being on top of the world. The trail winds along deep precipices on the edge of Carlisle Canyon and through a landscape that dwarfs the hiker. Boulders and cliffs tower above like stone giants; the horizon stretches all the way to the snow-capped San Gabriel Mountains on a clear winter day, with Mt. San Antonio hovering in the distance like a mirage. The view from the other side of the mountain reveals an expanse of ocean, with the northern Channel Islands spread out across it like puzzle pieces.

MIshe Mokwa Trail connects to a segment of the Backbone Trail to form a loop around the back of Sandstone Peak. The entire loop is about seven miles. While the National Park Service rates this trail as moderate, it is a fairly strenuous hike for the Santa Monica Mountains.

Split Rock, two miles into the loop, makes an ideal destination for a gentler four-mile round-trip hike. This shorter walk is a good introduction to the area, and it features some of the most spectacular scenery on the loop, with views of one of the mountains’ most celebrated landmarks: Balanced Rock.

It isn’t often one has the opportunity to walk into a poem, but this stretch of the trail remains unchanged from poet Madeleine Ruthven’s time. In her 1934 chapbook of poetry, Sondelius Came to the Mountains, she wrote:

The sky was blue with the blueness

The air of the canyon shimmered.

The great mass of Balanced Rock

Balanced Rock still hangs like fate. This house-sized boulder bears a slight resemblance to one of the Moa statues of Easter Island but it is actually the core of a long-extinct volcano.

Split Rock is a much less impressive landmark than the massive boulder perched on the cliff above, and is located in a riparian area, offering welcome shade even after the Woolsey Fire, and provides a pleasant place to rest, complete with a picnic table.

From here, hikers can continue on the loop trail to Sandstone Peak—the peak itself is a short, steep hike off the main trail or head back the way they came. More ambitious hikers have the option of summit at one or more of the other nearby peaks.

The dramatic cliffs and spires along the trail attract rock climbers that have sometimes been at odds with park personnel. Rock climbing is permitted at Echo Cliffs, below Balanced Rock, but climbers are asked to be careful and not to damage fragile cliffside native plants.

The current generation of climbers aren’t the first. Ruthven described the “madness of exploration” that seized her companions on a ramble in the Yerba Buena back country:

Over rocky ledges, through virgin brush,

When the sun began to lower,

they knew that they were lost.”

People still get lost. One of two tragic heat-related hiking fatalities in the Santa Monica Mountains last year occurred at Circle X; several dogs have died from heat stroke here as well. Backcountry hikers are advised to be prepared, stay on the trail, bring plenty of water for everyone—two-footed and four-footed—in their party, wear the right shoes, and wear layers. The mountains breed their own weather. It can be hotter or colder than the lower elevations, and there is little shade since the Woolsey Fire scoured this area in 2018.

Mishe Mokwa Trail can be crowded on weekends. However, hikers willing to start early on a winter morning or take time off during the week may be rewarded by having the entire mountain to themselves.

Mishe Mokwa Trail is limited to hikers—no bikes or horses are permitted, although one may encounter them on the Backbone Trail portion of the loop, and sometimes bikers disregard the ban. It’s a good idea to stay alert. This is a steep, narrow trail in many places and there isn’t much room to get out of the way. Dogs must be on a six-foot or shorter leash at all times.

There are no restrooms at the Mishe Mokwa trailhead, no potable water, and cell reception in this area is limited, so plan accordingly.

The Mishe Mokwa trailhead is located across the road from a large dirt parking area on Yerba Buena Road, east of the Sandstone Peak trailhead and about five miles west of Mulholland Highway. The easiest way to reach the trail is to take Pacific Coast Highway to Yerba Buena Road. This has the advantage of taking one right past the ranger station at Circle X. Open on weekends, this tiny outpost offers maps, information, and a restroom with running water. One can also take Mulholland all the way to Yerba Buena—the ultimate scenic route in the Santa Monica Mountains.

This isn’t the closest or easiest trail to access, but it is worth the extra effort for its wide open spaces and spectacular views.