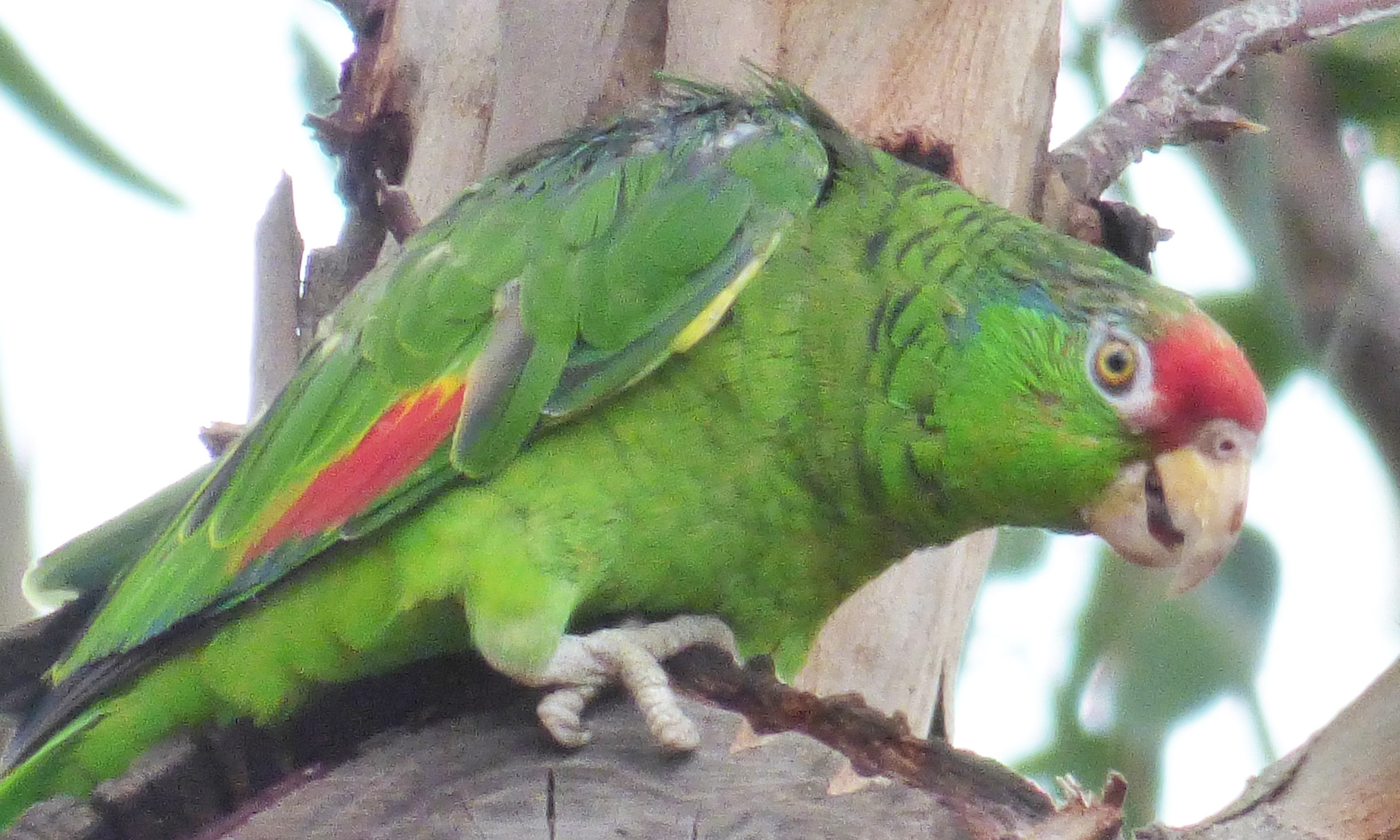 The colorful red-crowned parrot is an endangered species in its native Mexico, but is thriving in Southern California, including the Santa Monica Mountains. Photo by Suzanne Guldimann 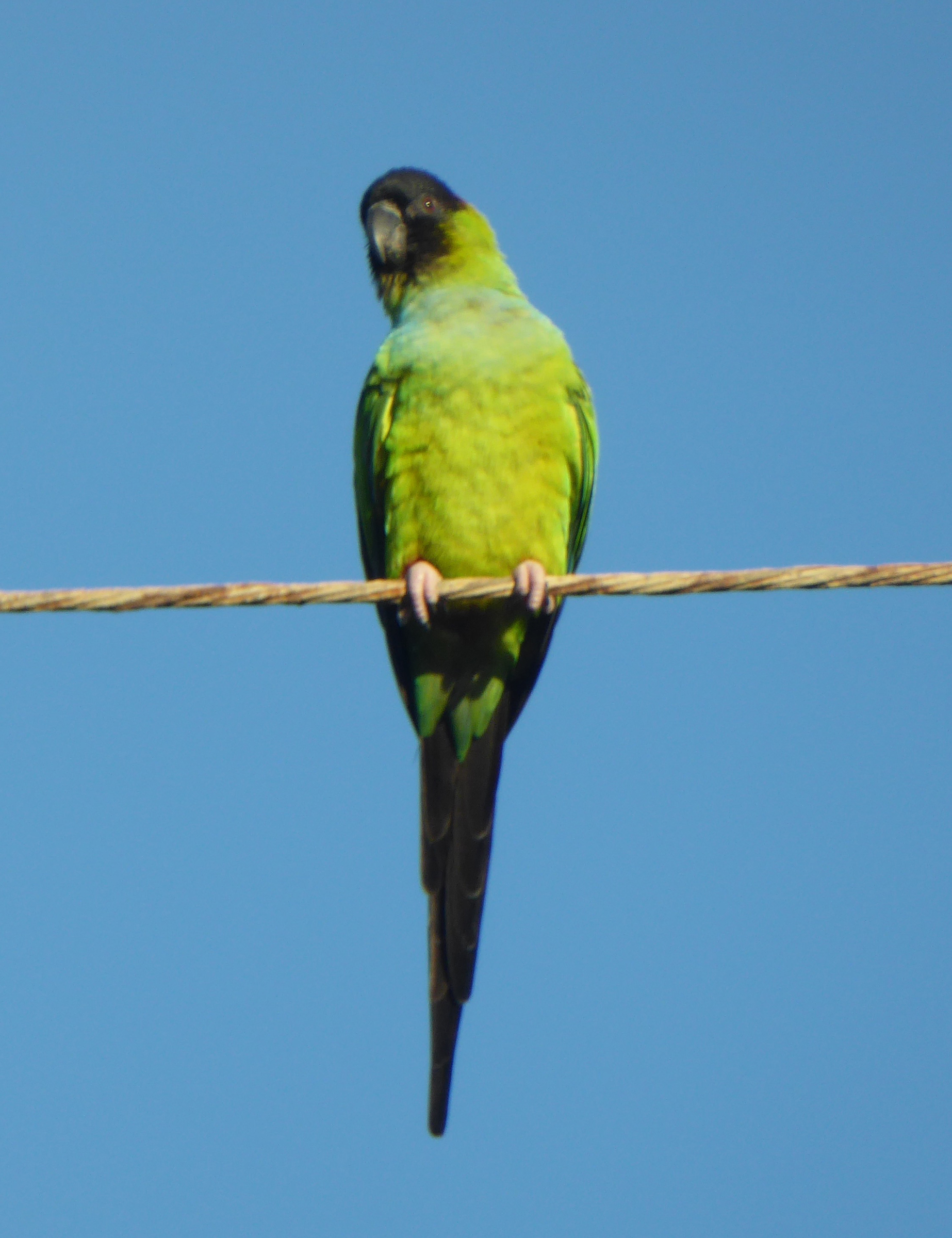 A nanday parakeet perching on a canyon telephone wire watches the world go by. This species escaped from human captivity but still depends on us and the landscape we have created for its survival. Photo by Suzanne Guldimann 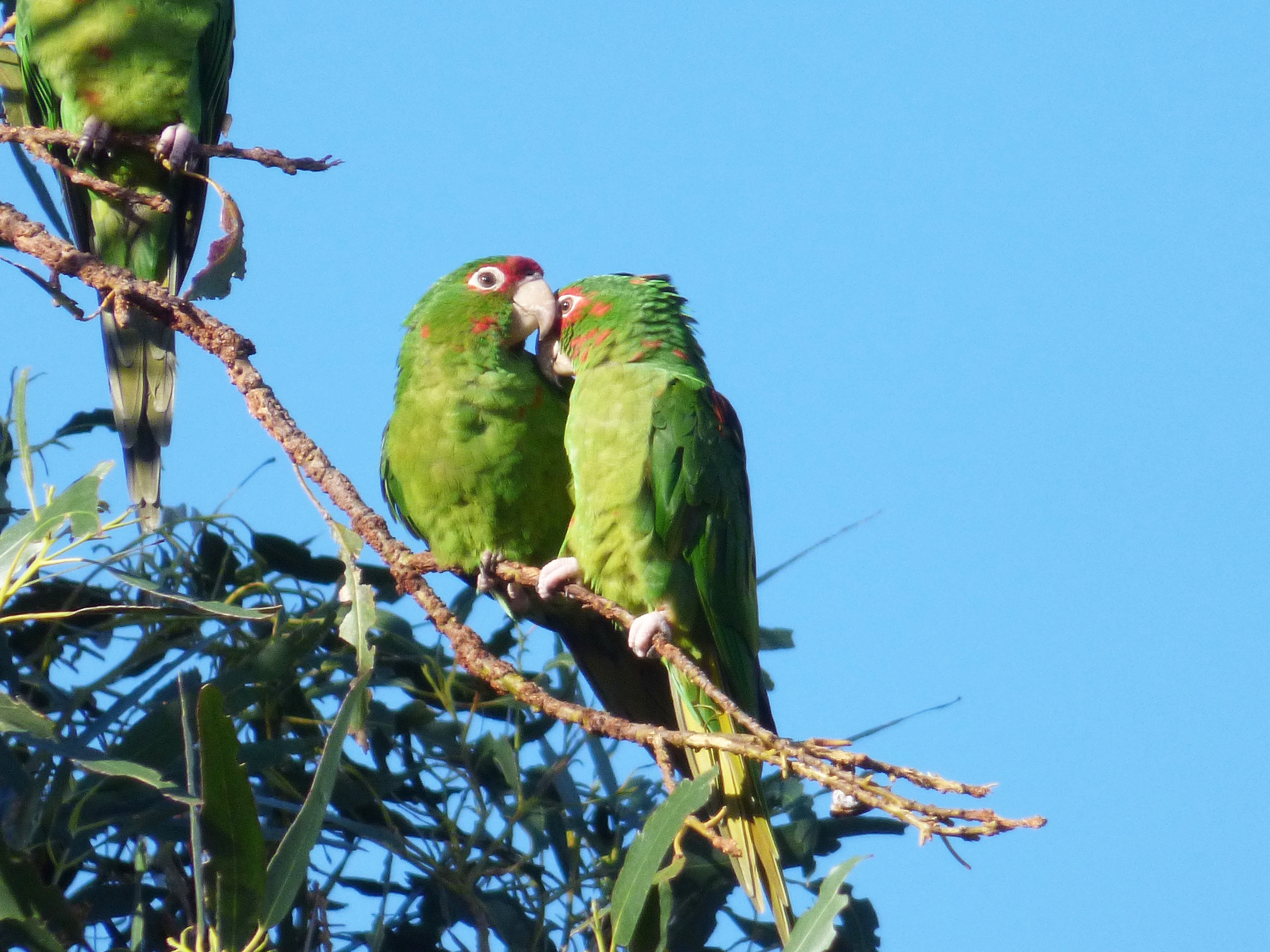 Mitered parakeets snuggling with a parrot chaperone keeping a discreet eye on them. Photo by Suzanne Guldimann 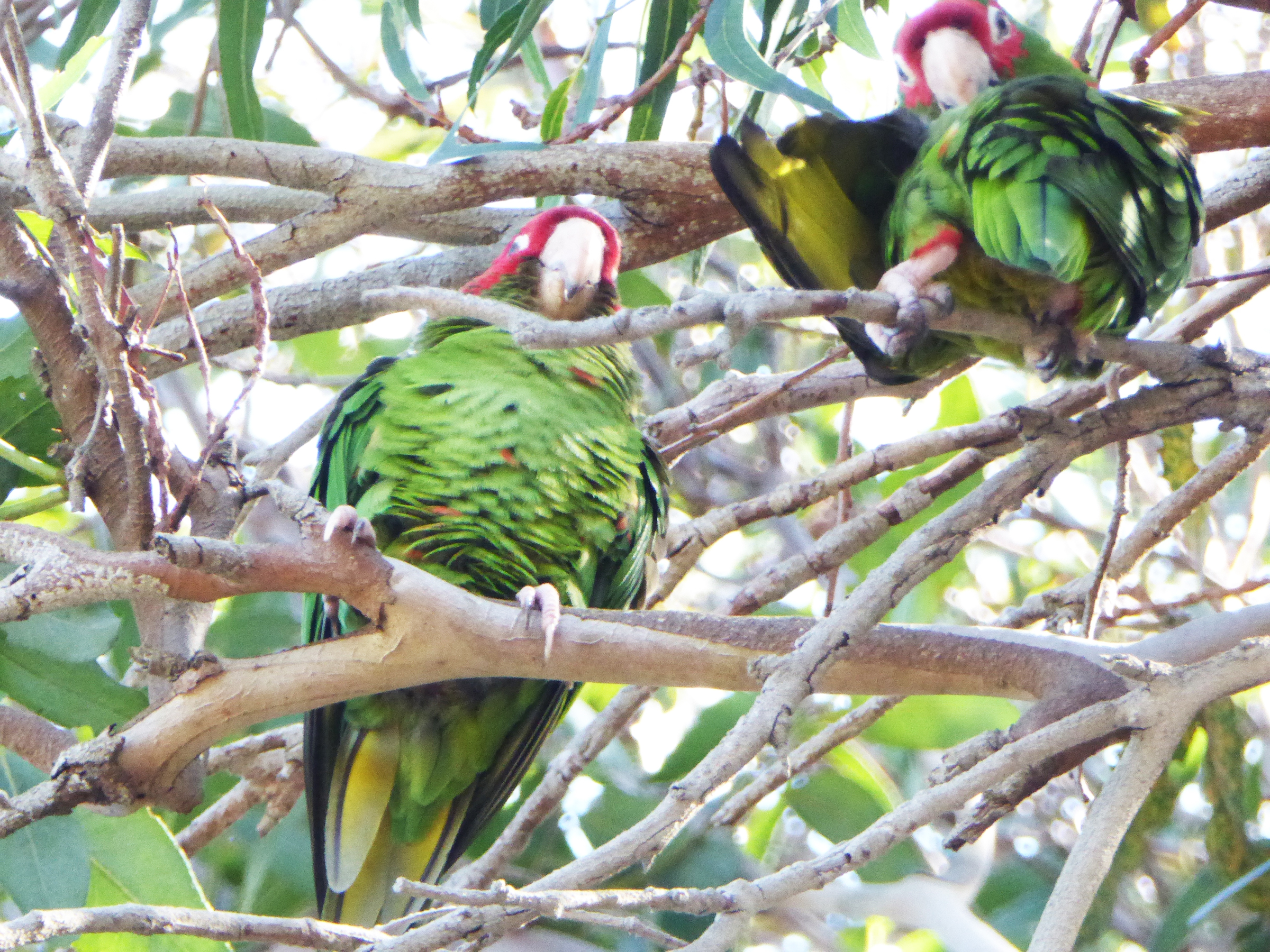 Mitered parakeets at the top of a big eucalyptus tree where they have their nest. Photo by Suzanne Guldimann 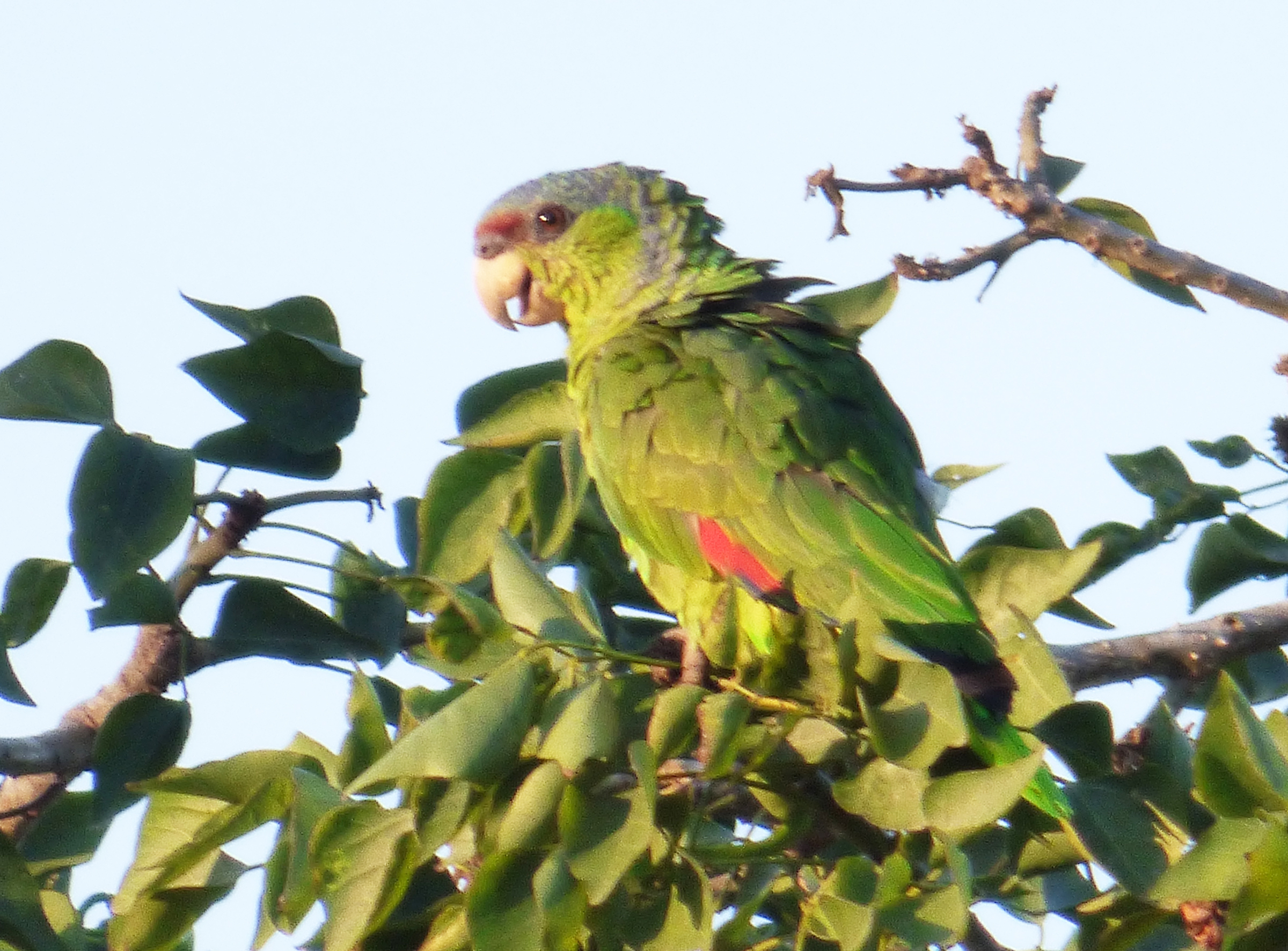 A lilac-crowned parrot on top of a coral tree in Malibu. This was the first time this Messenger Mountain News reporter has had a sighting of this particular species of parrot and, just like Dorothy in the Wizard of Oz, it was in her backyard. Photo by Suzanne Guldimann

Escaping the illegal pet trade and habitat loss in Mexico and South America, parrots have come “home” to roost in L.A. Above, the colorful red-crowned parrot is an endangered species in its native Mexico, but is thriving in Southern California, including the Santa Monica Mountains.

Almost everyone in Topanga has heard the tropical chatter (or screeching, as some locals would have it) of the local wild parrots or caught a flash of green flying through the trees. These colorful immigrants have integrated themselves so well into the environment that it’s hard to imagine the area without its parrots, despite the fact that they are relatively recent arrivals.

Beginning in the 1960s, large numbers of wild parrots were imported from Mexico and South America into the U.S for the pet trade. This largely illegal trade appears to have peaked in the 1980s and 1990s, although it remains a problem. California’s parrots appear to be descended from birds that escaped captivity, or possibly were released when owners discovered that the wild-caught birds were not pets.

Natural History Museum of Los Angeles’ ornithologist, Kimball Garrett, the Collections Manager for the ornithology collection at the museum, has been monitoring naturalized bird populations in the Los Angeles region since the early 1990s. In 1997, he published his research on naturalized parrots in the journal, “Western Birds,” reporting on ten species in the greater Los Angeles area. Garrett concluded at the time that parrot populations would likely continue to expand. He was right and recently shared his thoughts on the local parrot population via e-mail, including information on the species most commonly sighted in the canyon.

The most commonly seen—and heard—parrot in the Topanga area is the nanday parakeet (Aratinga nenday), also known as a nanday conure. These sleek green birds have dark feathers on their heads, which give them their other common name: black-hooded parakeets. These are the gregarious, loud, and acrobatic parrots that delight and sometimes exasperate residents of Old Topanga and Red Rock canyons with antics that include hanging upside down in the sycamore trees to eat the seed clusters and quarreling with the crows over the best evening roosting spots.

“Nanday Parakeets have become quite common in parts of the Santa Monica Mountains after having spread westward from the Brentwood/Pacific Palisades areas over the past 20 years or so,” Garrett wrote. “They’re now routinely seen in residential areas on both sides of the mountains west into the Thousand Oaks/Newbury Park areas, as well as in the canyons (Topanga, Malibu, Zuma, Big Sycamore, etc.).”

Garrett said that it’s difficult to determine the total population, because the birds move around frequently, but estimates there are 300 or more in the area, including Topanga.

“We don’t know how many separate sub-populations exist within the Santa Monicas, but it seems likely there are a few,” he added.

Several other parrot species appear to be increasingly common in the Santa Monica Mountains, including the mitered parakeet, the red-crowned parrot, and the lilac-crowned parrot.

Like the nanday parakeet, the mitered parakeet (Psittacara mitratus), is a member of the conure family and was imported from South America. Like most of the area’s parrots, this species is bright green, but it is more robust than the nanday parakeet, with broader wings. Juveniles are sometimes solid green, but adults have a splash of red feathers around their beaks and eyes, as if someone splattered them with paint.

Garrett says that mitered parakeets are more likely to be spotted at the western end of the Santa Monica Mountains than in Topanga, but this colorful bird appears to be thriving and its range seems to be expanding. He has observed a flock of 50-75 birds in the Point Dume and Zuma Canyon areas.

“There are sometimes a few Red-masked Parakeets (aka “Cherry-headed Conures,) (Psittacara erythrogenys) in with these Mitered,” he added. “The high count was seven.”

Red-crowned and lilac-crowned parrots resemble the mitered parakeet in size and coloring, but these two species are Amazon parrots, not conures. Lilac-crowned parrots (Amazona finschi) are green with a small amount of dark red on their faces and the namesake lilac color on their heads. The lilac-crowned parrot doesn’t appear to have arrived in Topanga yet, although it is frequently spotted in Malibu, while flocks of red-crowned parrots appear regularly throughout Topanga, including Bonnell Drive in Old Topanga, apparently something of a parrot hotspot.

Red-crowned parrots (Amazona viridigenalis) have a much brighter red patch above the beak than their lilac cousins, and grey-blue coloring on the top of their heads. Both species also have a flash of red and yellow on their wings.

“Rough estimates for each species in the Santa Monicas would be about 50-75 individuals each,” Garrett said. “Rarely, a Yellow-headed Parrot or two will be seen in lower Zuma Canyon/Point Dume.”

The red-crowned parrot appears to be thriving in California, but it is critically endangered in its native northeastern Mexico, where habitat loss and the illegal pet trade continue to push this bird towards extinction.

In a June 18 editorial, UCLA Professor Ursula Heise, the Marcia Howard chair in literary studies and a professor at UCLA’s Institute of the Environment and Sustainability, wrote about how L.A. can provide an unexpected sanctuary for a non-native species like the red-crowned parrot.

“Cities like Los Angeles not only destroy habitat, but also create new living spaces for animals and plants,” she wrote. “In the Los Angeles area, there are about 2,000 to 3,000 red-crowned parrots, a number that could at this point rival or exceed that of the remaining wild population in Mexico.”

For the parrots, the tropical and semi-tropical garden plants that have come to define the Southern California landscape provide an ideal ecological niche.

“Some of the new ecological niches that have been created in cities have been occupied by non-native species through sheer serendipity, by plants or animals, like the red-crowned parrots that happened to land in town and know how to take advantage of the niches they found,” Heiss wrote.

She asks whether urban areas like L.A. could also one day “deliberately offer sanctuary to endangered species…those that are native, of course, but also those that are not.”

“All of these parrot species are descendants of birds originally imported for the pet trade, but [they] have established breeding (and often thriving) populations,” Garrett said. “There are dozens more kinds of parrots that are seen as escapees from time to time, from macaws and cockatoos down to budgies, cockatiels, and lovebirds.”

It remains to be seen if any additional escapees survive to establish successful populations.

Canyon and coast residents can help the area’s parrots and native birds by only trimming trees in late autumn and winter, never during nesting season except in an emergency, and by keeping domestic cats safely indoors and away from tempting things with feathers.

The different species of parrots have different needs—Topanga’s nanday parakeets are cavity nesters who are often attracted to hollow sycamores, while the mitered parakeets build nests in tall trees, including eucalyptus—but all of these birds depend on humans and the plants they have introduced to the California landscape for their survival.

Garrett encourages readers to check out the parrot distribution data on eBird, the online bird resource site for the Cornell Bird Lab: www.ebird.org. “Specifically, go to ‘Explore’ and click on ‘Species Maps’ and enter the name of the species you’re searching for,” he suggests.

Local bird watchers who are interested in contributing data on parrot sightings can sign up and post their observations, but no registration is required just to look at the data.