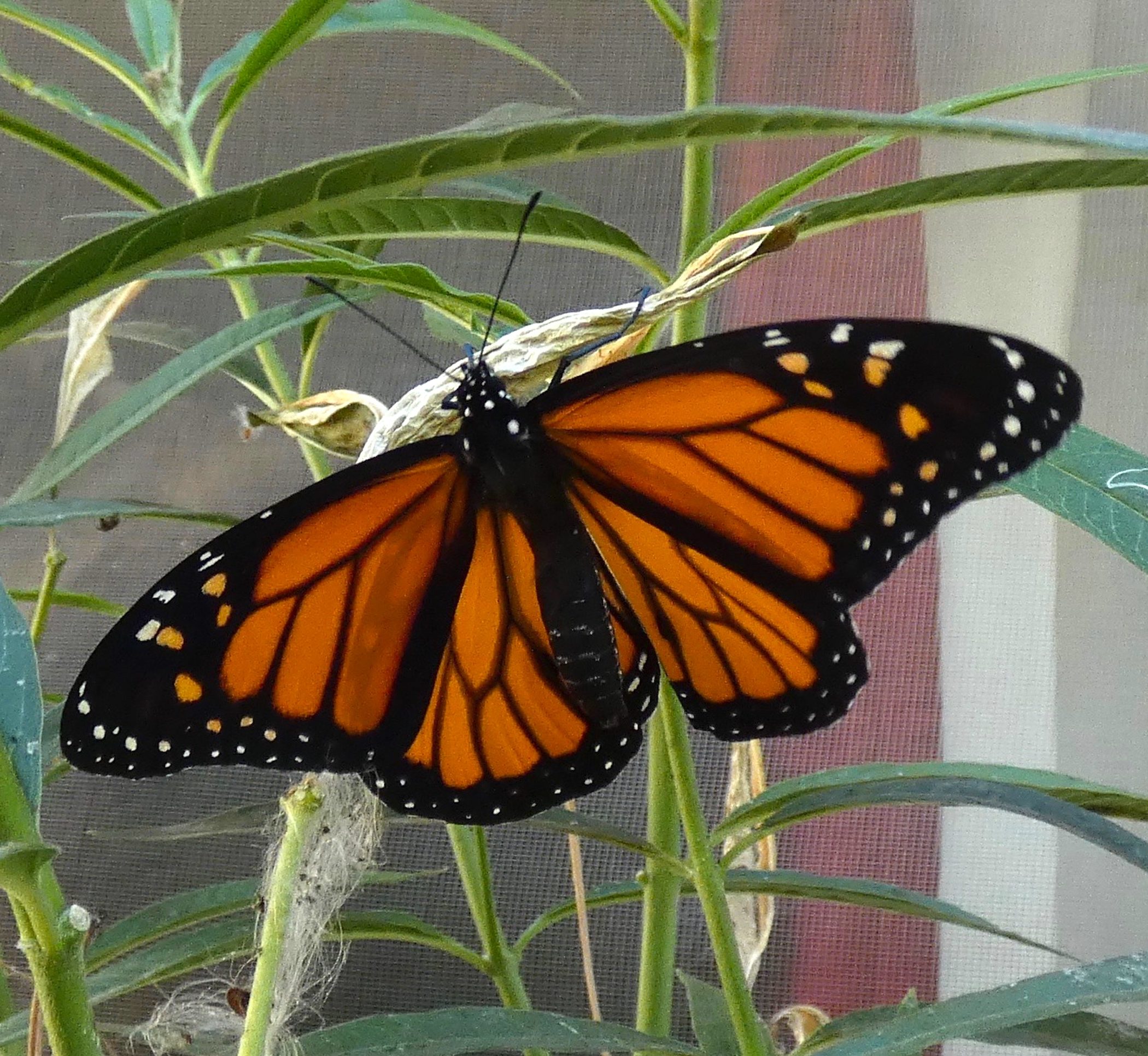 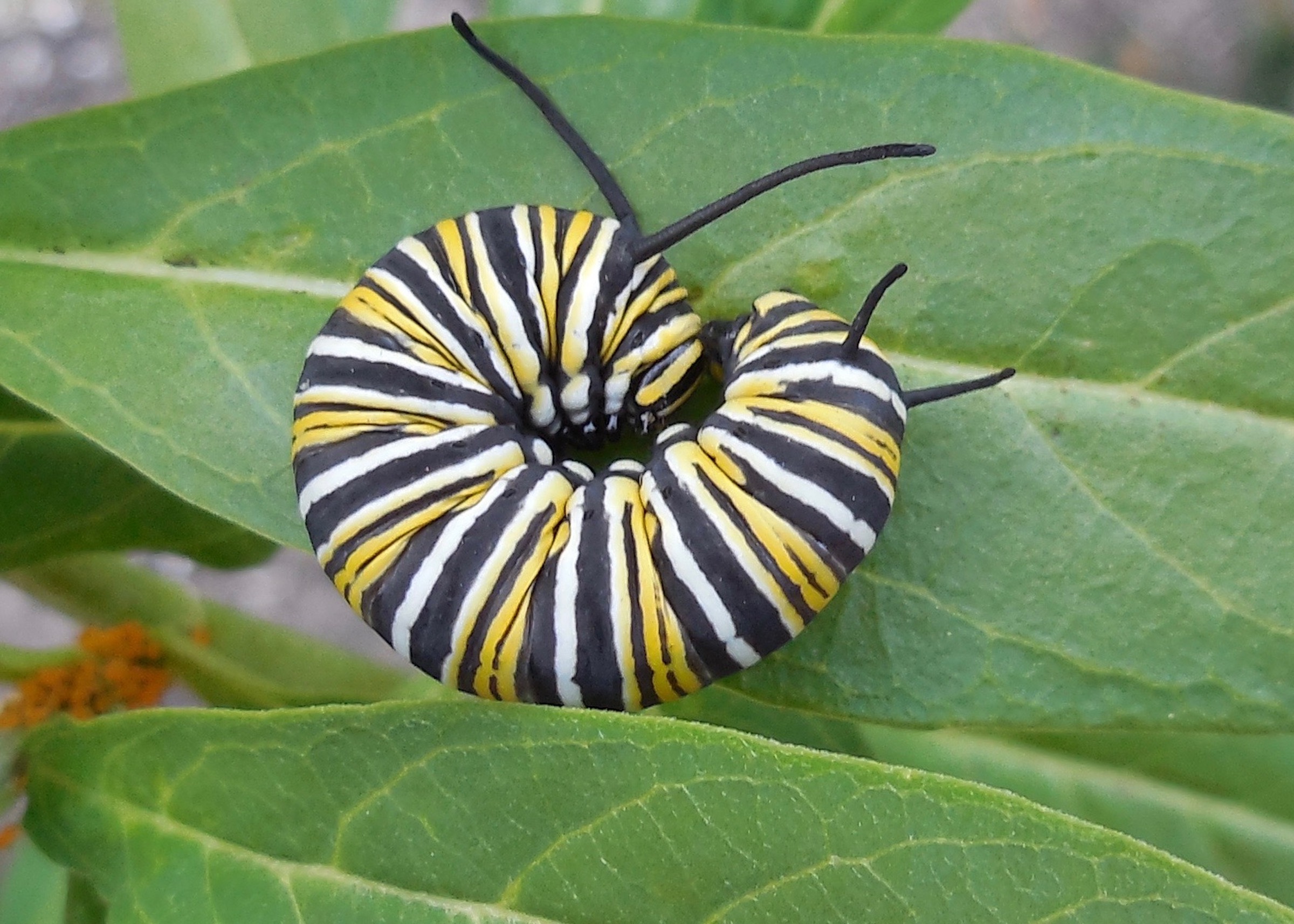 While milkweed flowers attract many pollinators, monarch caterpillars have evolved to eat only milkweed plants. Toxins in the plant are transmitted to the insect and help protect the caterpillars and adult butterflies from many predators. This caterpillar hatched in the author’s pollinator garden. It was the only monarch this year 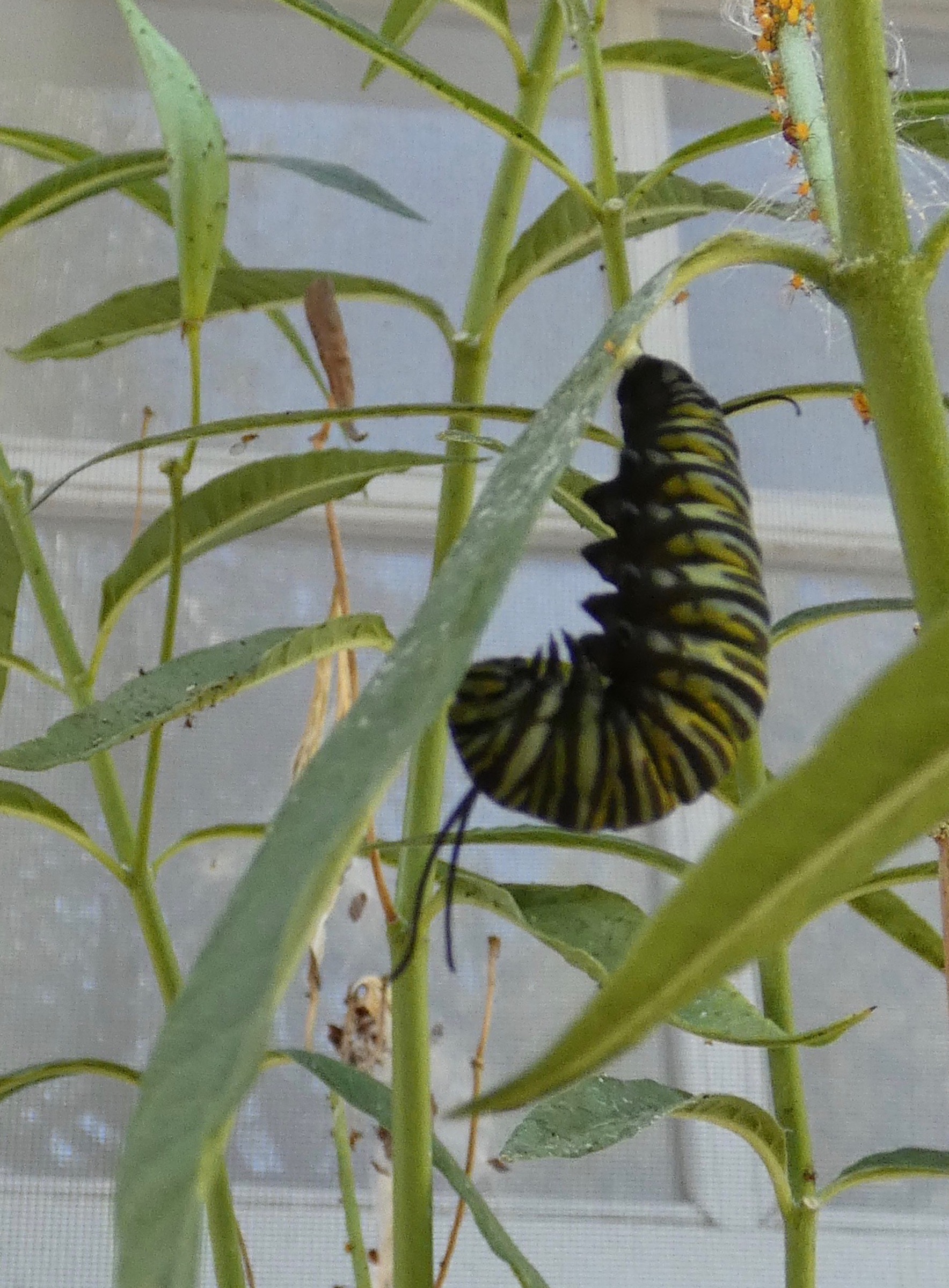 The caterpillar attaches to a leaf or twig when it is ready to become a chrysalis. 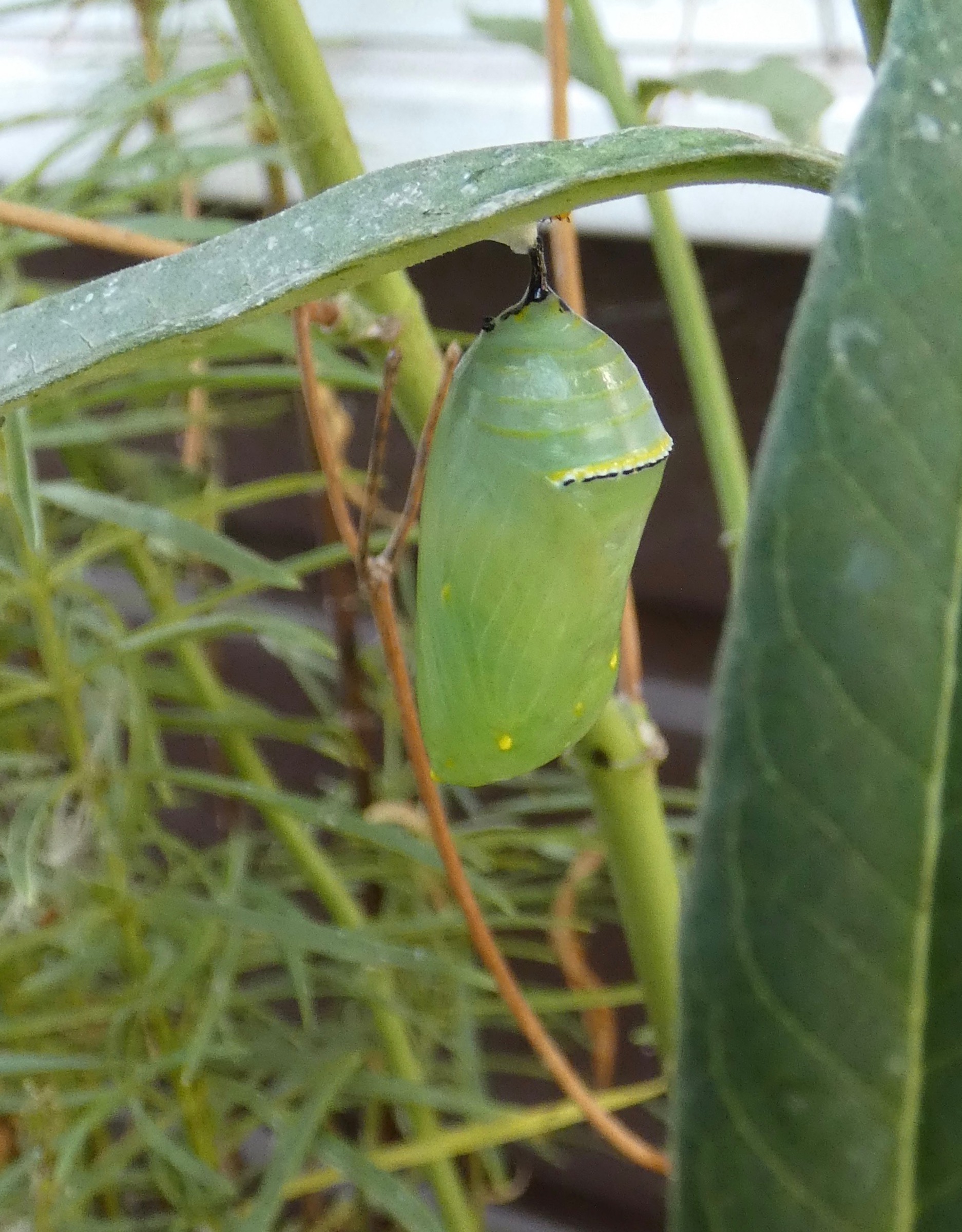 The monarch chrysalis is beautiful, like a jade ornament. Inside, a complex transformation is taking place; the caterpillar becomes almost jelly-like before reforming into a butterfly. 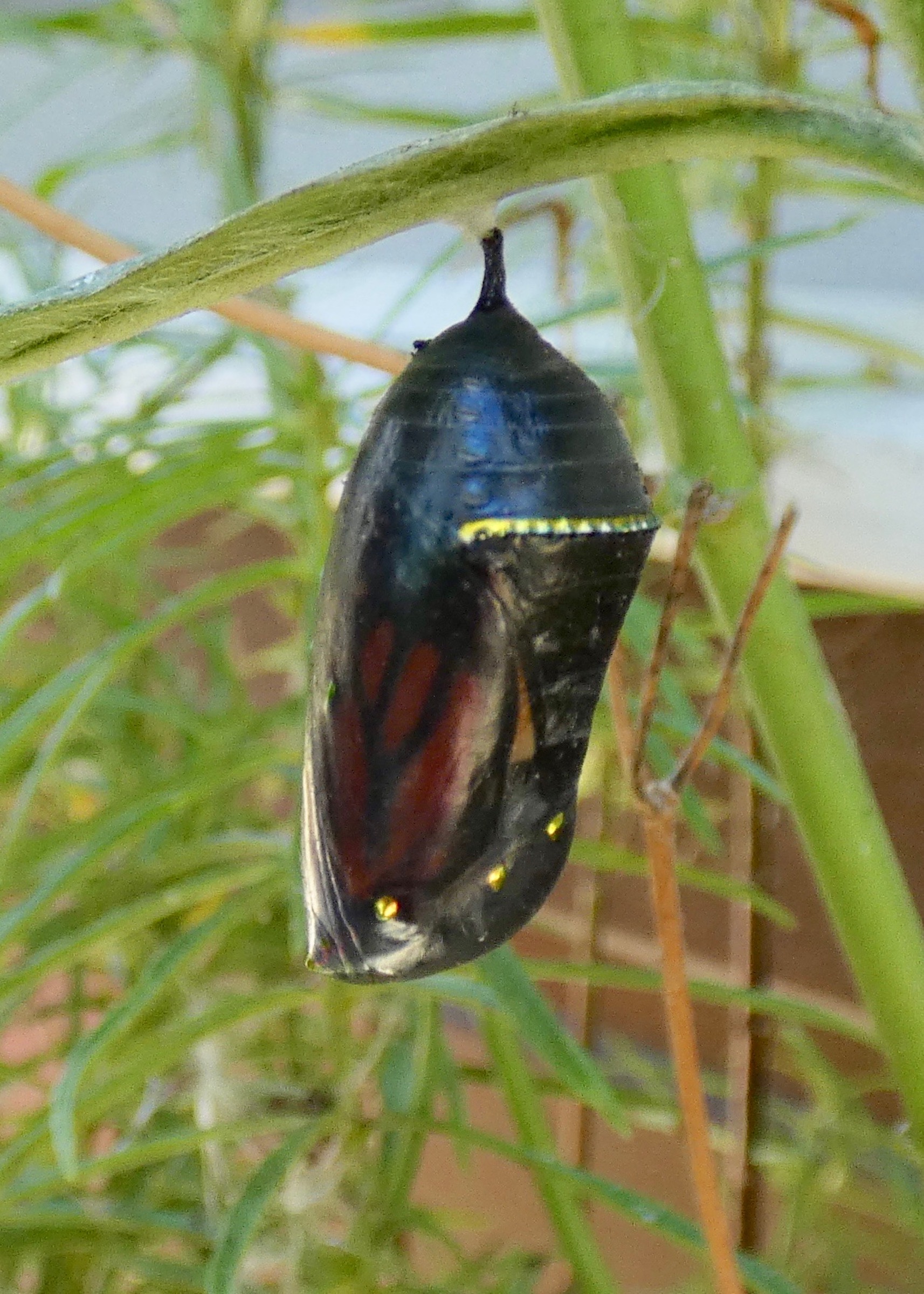 The chrysalis becomes transparent and thin when the butterfly is ready to hatch. 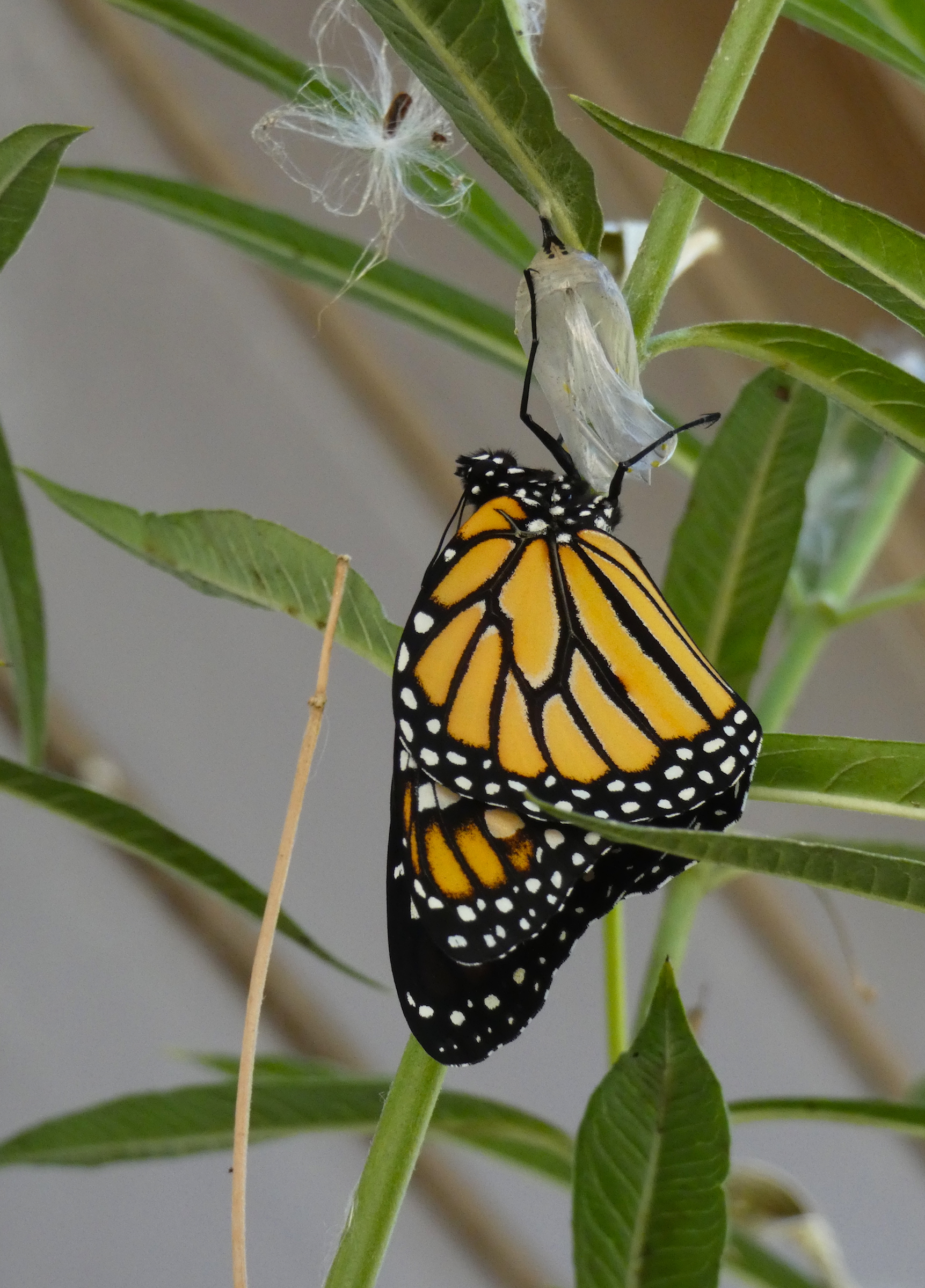 The butterfly clings to the discarded chrysalis while it stretches and unfolds its wings. 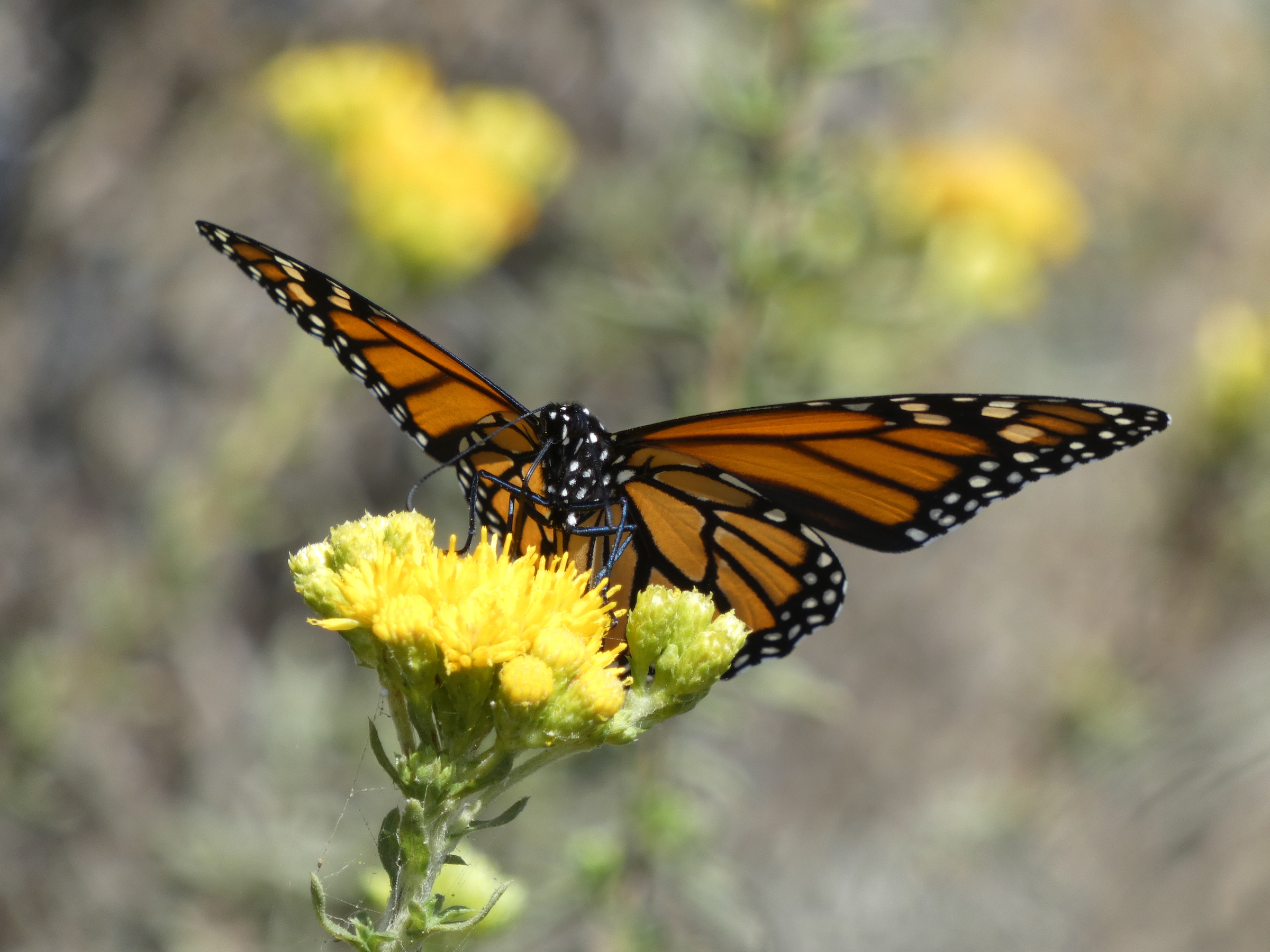 The mature butterfly, ready to test its wings.

The monarch butterfly population has crashed in recent years but there is still hope of this much-loved long-distance traveler.

There was a time not long ago when millions of Western monarch butterflies filled the sky in autumn, migrating south to winter along the California Coast.

It takes multiple generations of these remarkable butterflies to make the round trip journey. The butterflies that migrate north in the spring transmit the knowledge to their offspring, which will make the return journey and arrive at the ancient overwintering sites. Even though they have never been there before, each butterfly knows the way.

While Pacific Grove in Monterey County and Natural Arches State Park in Santa Cruz County are world famous for their tree groves filled with overwintering monarchs, the colorful migrants also once flocked to the Santa Monica Mountains.

Zuma Canyon in Malibu was a traditional overwintering destination, so was Santa Ynez Canyon on the eastern side of Topanga State Park, but colonies of butterflies also returned year after year to trees in people’s gardens or along the roads, where the olive green leaves of the old eucalyptus trees, planted as windbreaks in the early 20th century, would be covered with the illusion of autumn gold from a million butterfly wings.

An estimated 4.5 million monarchs overwintered in California in the 1980s. By the mid-2010s, the population had declined by an estimated 97 percent. In 2018, according to data collected by the Xerces Society, which has conducted annual autumn and winter monarch surveys since 1997, there were only 28,429 butterflies, a record low, down 86 percent from the 2017 count.

According to the population study, for every 160 monarch butterflies in the 1980s, there is only one left today.

IT’S NOT ALL BAD NEWS

Texas and Oklahoma are experiencing a larger than usual monarch migration this autumn, as Eastern monarchs head south to central Mexico. It’s not clear if higher than usual numbers represent a population rebound or are simply a fluke, but the increase is welcome. Scientists caution, however, that it is impossible to get an accurate estimate of the numbers until the insects reach their winter sanctuary.

Western monarchs travel south from Oregon and west from the Rockies to winter on the California coast, but their Eastern cousins have a truly spectacular migration, sometimes traveling from as far north as Canada down to Mexico, a 3000-mile trip that takes multiple generations to complete.

Although Mexico has been the destination for these long-distance voyagers for millions of years, and the brightly colored insects are part of Mexican culture and folklore, this migration was only understood by Western scientists in the 1970s, when the habitat that supported the overwintering population of butterflies was already at risk.

Lepidopterist Kenneth Bruegger tracked migrating Eastern monarchs to a massive colony in the mountains of central Mexico in 1974. In an effort to protect the site “in which millions of monarch butterflies cluster in a three-to-four-acre area,” the team refused to divulge the coordinates, the article reveals, but the information ultimately leaked.

A member of Brower’s team of researchers, acting on that information, located “a massive overwintering site” in the same vicinity in the winter of 1976.

The same year, monarch researcher Paul Tuskes, using a catch, mark, release and recapture method, calculated that the overwintering site in Santa Cruz hosted a peak abundance of 90,000 butterflies. Brower’s team, using Tuskes’ calculations for butterfly density, estimated that there were 13.8 million butterflies at the site they uncovered in Mexico.

In the article, Brower attributes the lower density of monarchs on the California coast site to disturbed habitat, and the fact that eucalyptus had largely replaced the once wider variety of native trees. At the site in Mexico, the butterflies had a greater choice of roosting trees.

Brower would become one of the monarchs’ most passionate advocates, working to protect overwintering sites and raise awareness about the impact of pesticides on butterflies and other insects.

He worked with the government of Mexico to help create the Reserva de Biosfera de la Mariposa Monarca in 1980. This World Heritage Site, located on the border between the state of Michoacán and State of Mexico, is home to eight of 14 known overwintering sites in Mexico. Although the area is protected, illegal logging and grazing continue to erode the monarchs’ habitat. While only two of the eight sites are open to the public, tourists also are taking a toll on the butterflies’ sanctuary.

In California, only a fraction of known overwintering sites are protected. Removal of trees for development and fragmentation of habitat continue to impact the Western monarch population. In the Santa Monica Mountains, many known overwintering sites were impacted by the Woolsey Fire. It’s unclear how the loss of local tree groves will impact the butterfly migration. The annual population surveys help provide critically important data, but depend on volunteers who must be at the right place at the right time.

Brower died in 2018, discouraged by the decline in the butterflies he worked so hard to save, but he inspired many to continue his work.

There is help on the way for the Western Monarch. In 2018, a new California program was signed into law that allocates funds for farmers to restore unused land with milkweed, the plant essential for monarch survival. The program, which will be administered by the state Wildlife Conservation Board, will provide grants and other aid, beginning with $3 million this year.

There is also an effort to get the butterfly listed as a California State Endangered Species, a complicated process, because the authors of the California Endangered Species Act forgot to include insects in the law. An ongoing push to ban glyphosate, the herbicide in the ubiquitous weedkiller Roundup that is inimical to monarchs, also continues to gain ground, but it is a race against time.

IT’S TIME TO WATCH THE SKIES

Monarchs just landed on the Endangered Species Coalition’s 2019 list of 10 species most imperiled by pesticides. The report singles out glyphosate as the leading cause of the monarchs’ catastrophic decline.

“If we don’t act fast to end our addiction to glyphosate and other powerful herbicides—and restore native milkweed and other key habitat—the monarchs’ inspiring migration could come to an end,” the report states.

Butterfly watchers all over California and northern Mexico are watching the skies for the wayfarers, while activists and conservationists continue to fight to save this much loved, greatly threatened insect.

Local residents can help monarchs by eliminating backyard herbicides and pesticides, and by planting nectar plants to help sustain monarchs and other critically important pollinators.

Why Malibu Still Does Not Have A Pesticide Ban