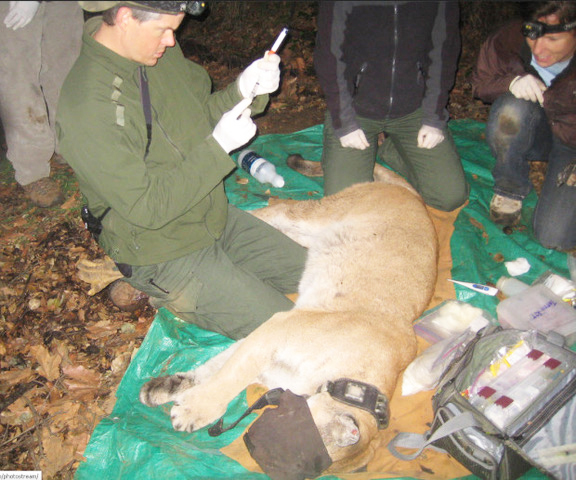 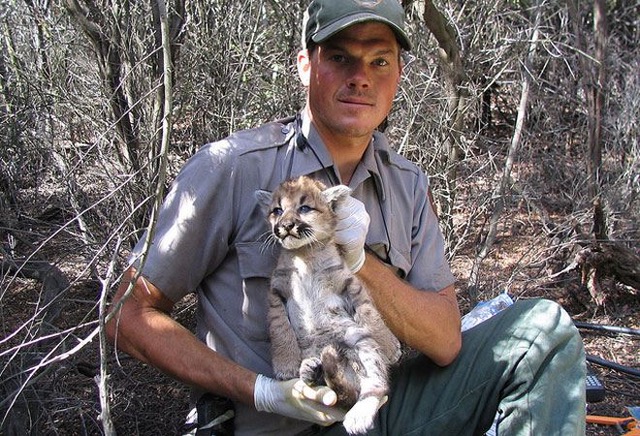 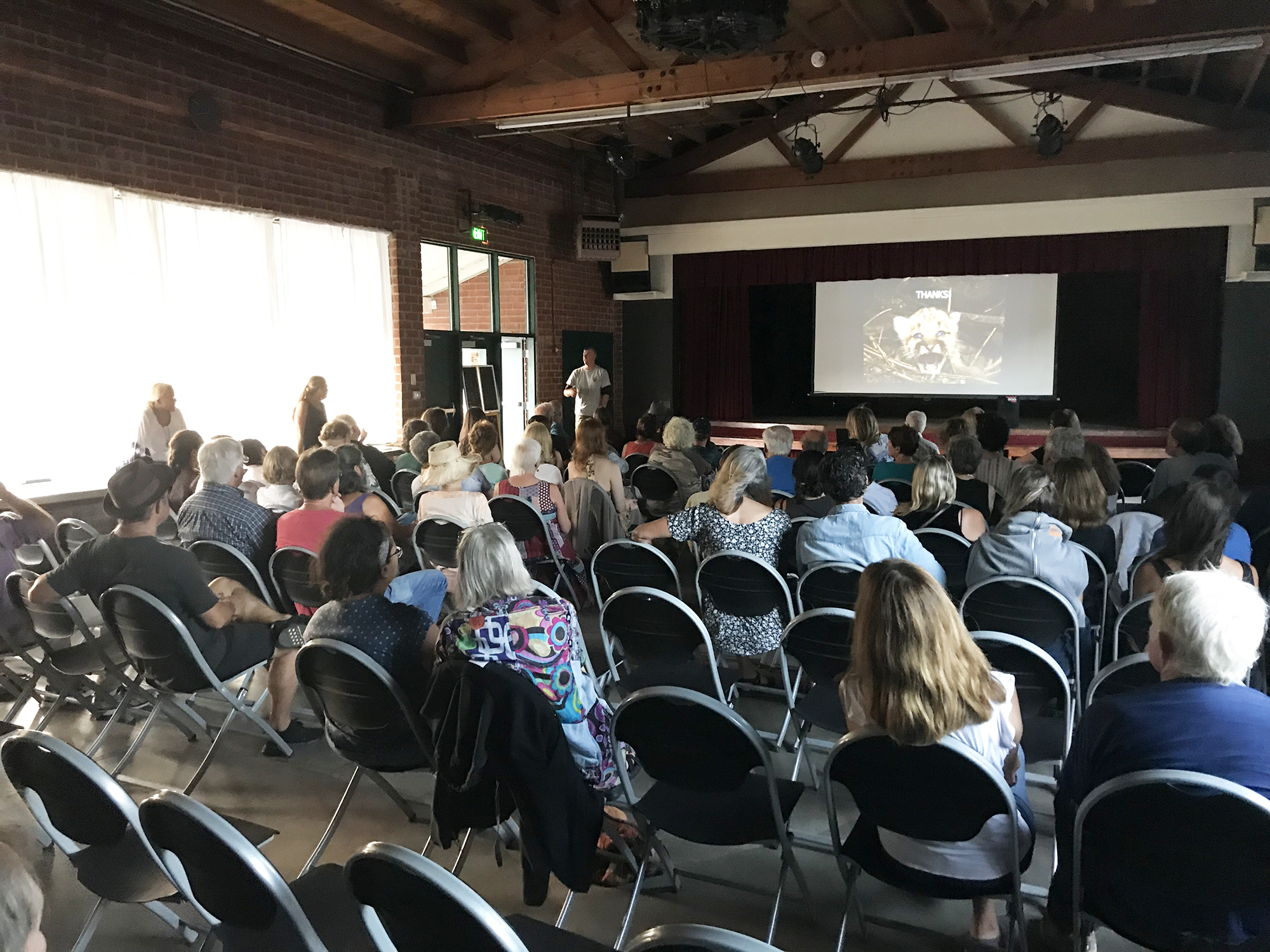 Nearly 140 people filed into the Topanga Community House on July 19 to listen to the foremost expert on mountain lions and large carnivores in the Santa Monica Mountains National Recreation Area (SMMNRA).

Patricia Hill, president of the Topanga Canyon Docents (TCD), and organizer of the event, introduced biologist Jeff Sikich of the National Park Service (NPS), who has been researching the local mountain lion population since 2002.

Sikich holds a degree in Environmental Science and Management from Indiana University. Throughout his career he has captured and handled more than 16 carnivore species for wildlife research. His work specializes in the safe capture and handling techniques for large carnivores and he often speaks to the public about how to protect mountain lions from loss of habitat and genetic isolation.

The Topanga Canyon Docents share his concern regarding other threats to mountain lions, especially deaths from vehicles and rodenticide poisoning. The purpose of the meeting was to help residents understand the lions, their behavior, and their habits.
Mountain lions are the last large predators in the Santa Monica Mountains. Grizzly bears and grey wolves were exterminated and no longer roam our mountains. Pumas, cougars, and panthers are all names for the mountain lions that exist from as far north as the Yukon and as far south as Argentina.

They are adaptable creatures and Sikich was very clear about one major point: “If mountain lions were a threat to people, they likely wouldn’t exist here any longer.” In the 69 lions he has studied, he has seen no aggressive behavior toward people. Mountain lions will go out of their way to avoid contact with humans and prefer a lot of cover and thick brush, away from homes and human disturbance.

The NPS tracks the lions, using GPS radio collars for location data. This enables them to locate the dens of kits and to take DNA samples. The cats’ movements indicate a strong desire for the most natural areas, as well as a need to avoid dominant males.
In 2012, P22, the lion that moved into Griffith Park after successfully crossing two major freeways, established his territory, where, unfortunately, there are no breeding opportunities. P22 avoided contact with other dominant male lions, when he may have been killed, but now lives alone within a limited, eight-square-mile range in the park.
The audience was eager to listen and understand more about the lions. Many people mistake bobcats for lions or believe that lions are out there stalking our pets. In fact, the preferred diet of a lion consists almost exclusively of deer (83%), with some predation of coyotes (7%), and raccoons (3%). When a lion attacks livestock it is not acting abnormally; it is just being a lion.

NPS has helped livestock owners learn how to protect their animals with properly secured pens, noting that once the lion is deterred, it usually doesn’t return.
Sikich spoke of how people can help protect mountain lions: Never use poison (rodenticides) and never feed wildlife or leave out food or water. He also advised people to keep their pets inside from dusk until dawn and, if by chance, you should meet a mountain lion, “never run. Instead, make noise and don’t turn your back. In other words, don’t act like prey.”

Sikich is a serious scientist. When he speaks about the subject of his work he is direct and matter of fact. His love for his work was evident when an attendee asked him to describe what it was like to hold the lion kits.

“Their fur is really soft,” he quietly responded.

The TCD encourages residents to learn more by supporting mountain lion research by contacting samofund.org, where you can find information about the upcoming “Concert for the Cats” at Peter Strauss Ranch on August 19, 6:30 p.m.
Julie Newsome is hosting the fundraiser. A $100 donation includes an evening of music, desserts, wine, and a wildlife update from Jeff Sikich and his colleagues in mountain lion research, Seth Riley, Joanne Moriarty, and Justin Brown. Peter Strauss Ranch, 30000 Mulholland Hwy, Agoura Hills, CA 91301. For information and to RSVP: (818) 292-5920; RSVP to Julie@gmail.com.

To donate to the wildlife corridor fund: TEXT “LION” to 25383 #SaveLACougars. 

Topanga Canyon Docents (TCD) is a volunteer group of naturalists who promote a fuller understanding of our unique environment and the 153,000 acres of wild land that surround our community. After reading several statements regarding mountain lion sightings on social media, Hill decided to organize the meeting in conjunction with the Topanga Community Center in order to dispel fear and misinformation about lions. The TCD strongly supports the fundraising efforts for the wildlife bridge at Liberty Canyon and 101 Freeway, which will allow animals of all species to disperse and establish territories. Genetic diversity within our local mountain lion population is in serious decline, threatening long-term survival of these wild animals. Interventions, such as wildlife corridors, are essential for the future of healthy and genetically diverse wildlife.