Have you ever felt called, beckoned by a power, an inner voice, or a feeling that leaves no room for doubt? It is a gift. When it happens, I listen.

A week ago, after ten years away, my son and I hiked up to the Labyrinth. Tonight Shi and I are going alone. I feel called.

I’ve also been receiving animal messages: the night I prayed for a dream from the ancestors and awoke at 2:30 a.m. to Coyote yapping on the street, then closer, then parking himself under my open bedroom window, so loud and fierce I didn’t dare get up to look; Raven standing on my street, then outside my living room window, and again, this time with Crow, cawing like a trumpeter at 6 a.m., not ceasing until I came out to ask, “What’s going on?!”; and the larger-than-life white Spirit Horse who, in a dream/vision, walked through my driveway, again under a window.

I am not the only one. Others are also having dreams and spirit visits. What is going on? Are we all being called? How do we know in which direction to go?

Some of the messages are painful, like the calm decision in a meditation two months ago to file a lawsuit against my children’s father, an act of truth, justice and heartache. I carry all of this with me tonight.

It is the full moon and I am to go to the labyrinth. I am to listen and walk, one step at a time. How else could I maintain sanity?

I pack an alabaster stone from the Maori healers, a black beach stone from Master Wu’s Qi Gong teachings, a sprig of White Sage from the Wright land, and my frame drum (for which I still have little skill but great love).

Shi jumps in the hatch and we head out. I feel the way I do when on my way to a sacred gathering, but tonight is a meeting of only self and Land.

It’s still too light out, so I turn up Entrada and, at the lower entrance to the park, pull up alongside the locked gate and call a friend. He reads to me a reminder of our shared desire and power to generate miracles and create a world we want to live in. Thirty minutes later I know it’s time.

We arrive around 8 p.m. About 20 vehicles are parked near the Tuna entrance. Shi jumps out and we head in. Halfway up the trail Shi encounters his first Tarantula, a black beauty about the size of my hand. He sniffs, she recoils, then we all go on about our evening’s business. By this point we are far above the layer of cotton covering the ocean. Tiny lights from the coast sparkle through the white. The moon rises, salmon colored, appearing not much higher than eye level. Two women, on their way down, tell us there’s a gathering of people reconnecting to the Earth. We tell the women about the Tarantula.

At the top, two dozen or so people stand by the edge of the mesa, facing the moon. Some talk. Some sit, quiet. A woman stands in the center of the Labyrinth, softly beating a drum. Another is standing with hands outstretched overhead. Several people are walking the Labyrinth, crossing paths as they go in, pause, go out. One woman, as she exits, places her hands in prayer position and bows. Shi walks the labyrinth in his own way, stepping over stones, crisscrossing paths, tail low but wagging, as he moves gently toward whomever appears available. Structure be damned, he seems to say. I’m here for love.

The drummer and the arms-raised woman approach the exit, and I close my eyes, allowing the beats to vibrate in my body. Still at the entry, I squat down and place a hand in the dust. I would usually wait for a prayer to form, but this time I allow the path to pull me in. Drum in left hand, I begin a quiet, slow, ragged beat. Vocals follow: no words, only sounds, giving voice to heartache for my family. In my peripheral vision I notice some people move closer, in particular a woman with long hair, wearing white. I feel her energy join me as I walk. A female voice says, “Thank you.” I imagine it is hers.

Fear is a sacred messenger telling me when I am moving in the wrong direction, away from love. The Labyrinth calls me back to center, to the eye of the storm, to my heart, where all love, peace, and power, reside. I will not back down from the suit. It is a long time coming and is an action of standing for, not against. It is an action of love and law. I want to vomit, but I will not close my heart. That would be the greatest loss of all.

I reach the center and crumble the White Sage over the stones. Had I come with nothing, I’d have left strands of hair. The space, the land, gives of itself freely, with no defense or condition; I want to give the same way. Placing the drum down, legs fold beneath me in child’s pose, chest resting on thighs, arms resting on Earth. Forehead to the hard and rocky ground, a silent prayer emerges, and solace washes over me like a warm bath, so sweet and serene I want to stay forever. The stress and push of the lower world is gone, left beneath the cloud cover, down the hill, in some other world. I am home again, in the center, and all is well.

Afterwards I sit on the edge of the mesa with three other travelers. I sing a prayer for all families, and watch the clouds dissolve, revealing tiny clear lights in the world below.

Sage Knight is a local ghostwriter and Literary Midwife. She and her Golden Retriever companion, Shiloh, live at Top O’ Topanga and welcome your visits to www.SageKnight.com. 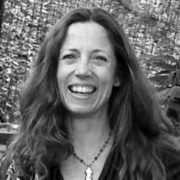 Sage is alive and well, living at Top o’Topanga with Shiloh, the Golden Retriever. Visit her at www.SageKnight.com.

Let There Be (Less) Light

“This Land is Our Land”