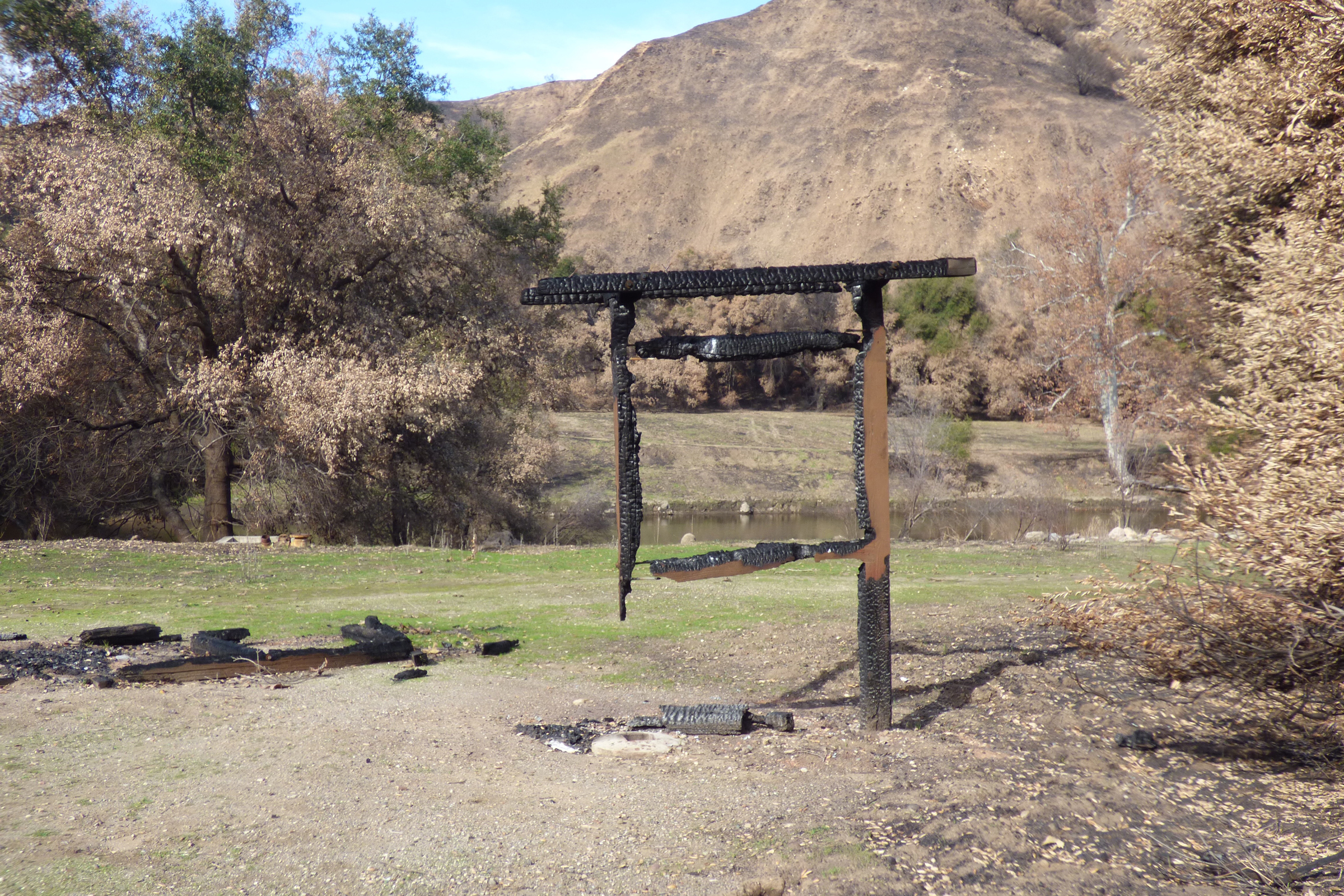 The skeleton of an information kiosk frames a view of the creek, instead of park information. Photos by Suzanne Guldimann 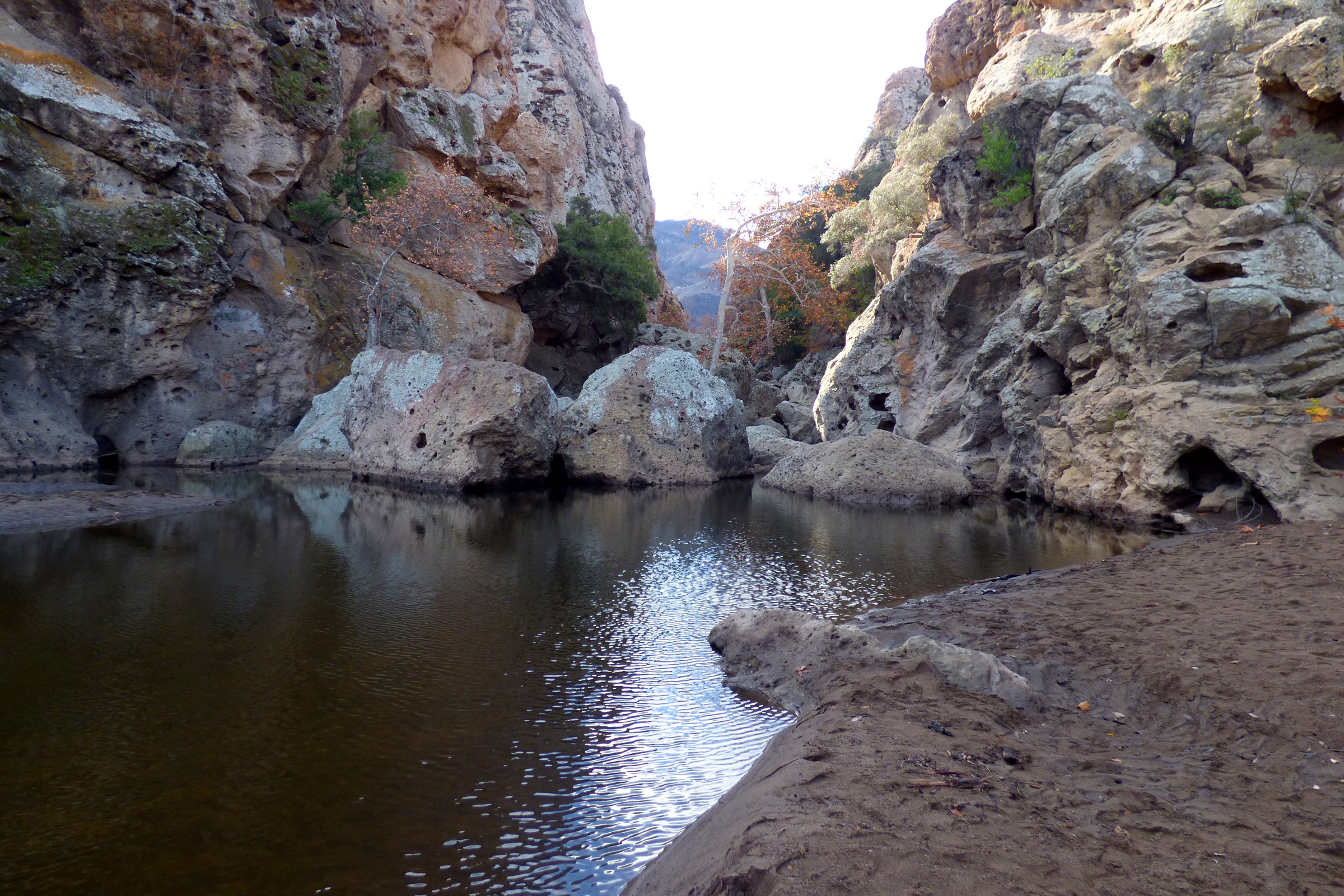 The fire skipped over some areas of the park, including much of the Rock Pool area, one of the most popular destinations in the park. 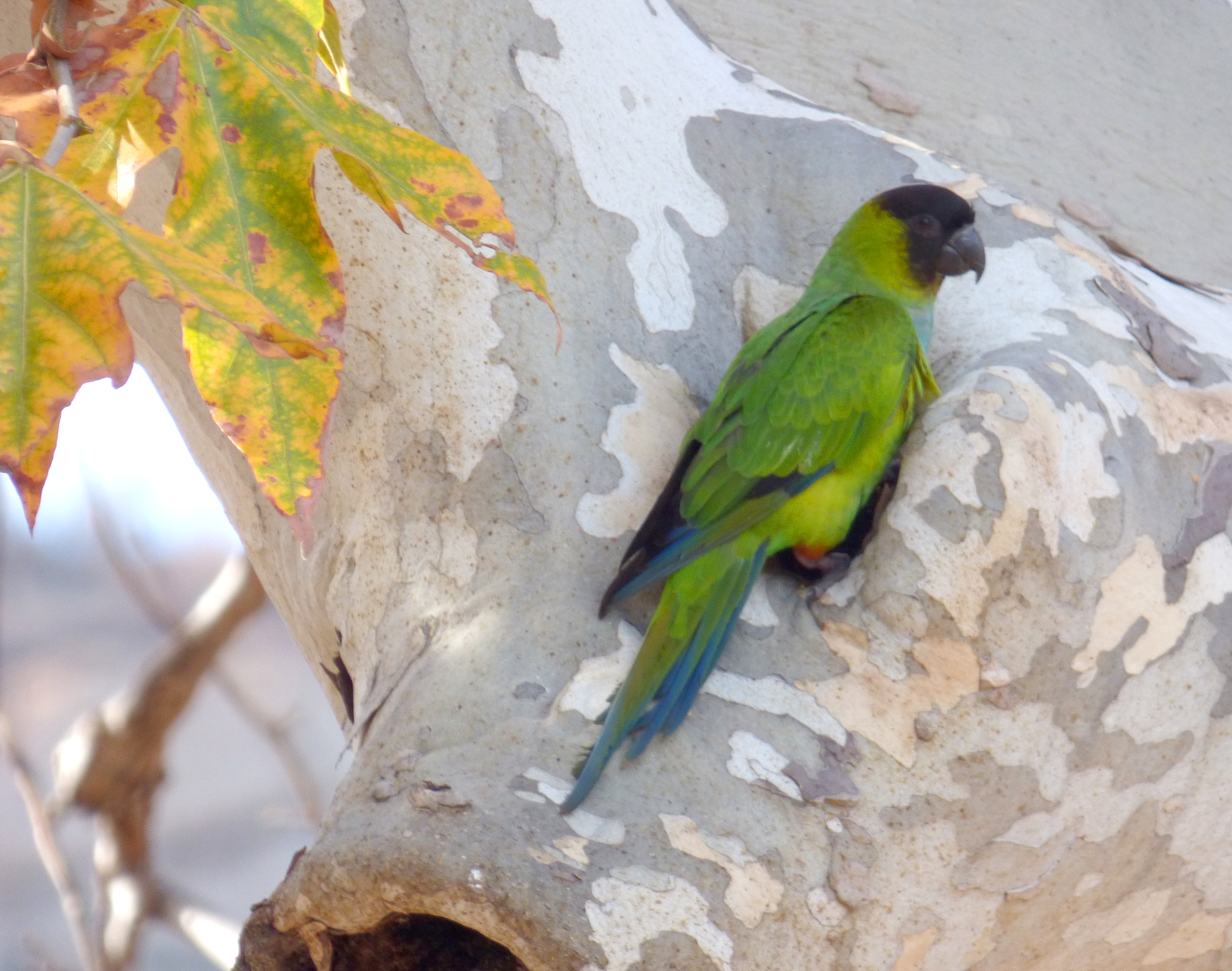 The non-native but naturalized nanday parakeet population of the park survived the fire and appears to be thriving. This bird was checking out a cavity in a sycamore tree, perhaps with nesting sites in mind. 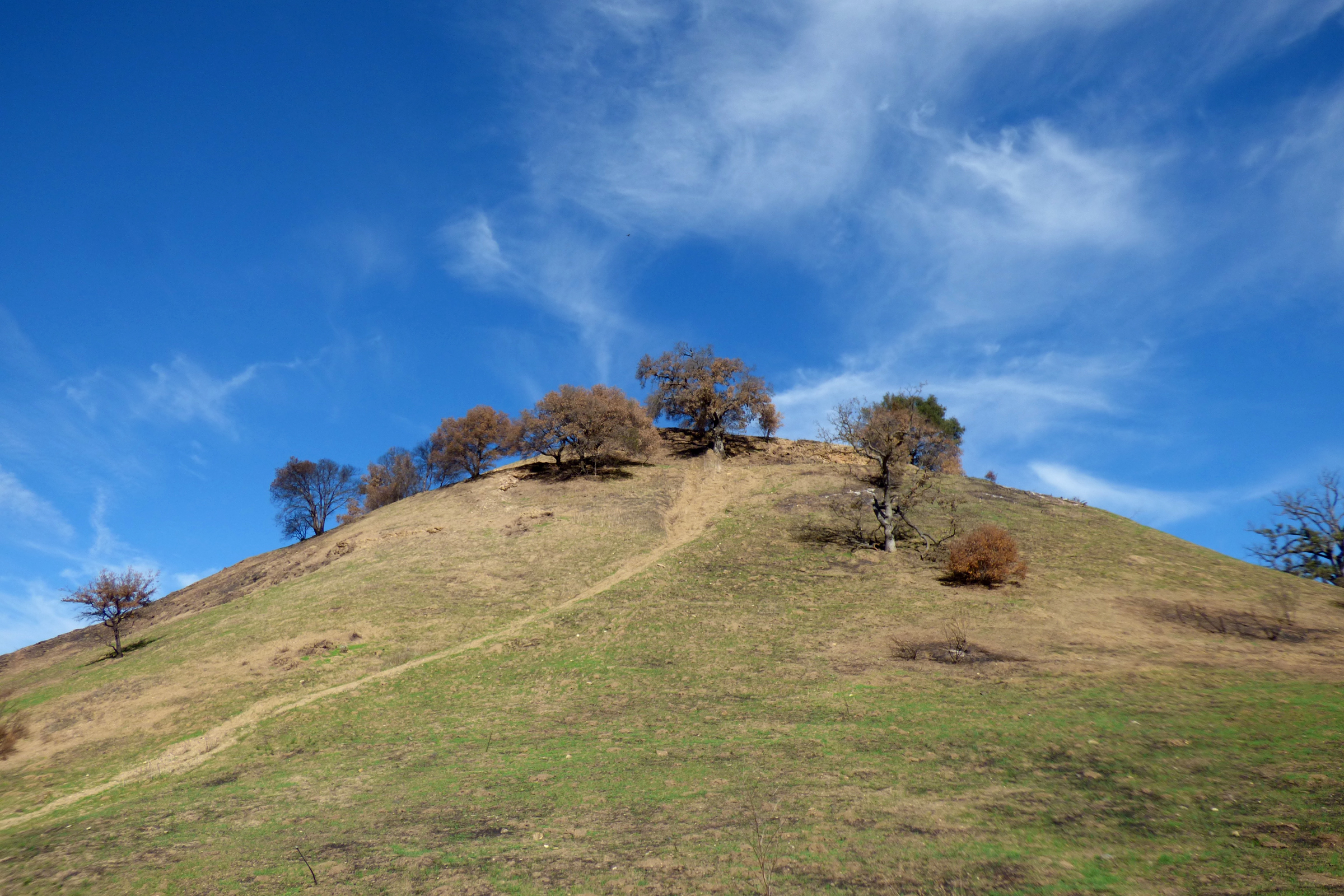 Even though the oak woodland in the park has burned, many of the trees are expected to recover, and there is still peace and beauty in abundance. 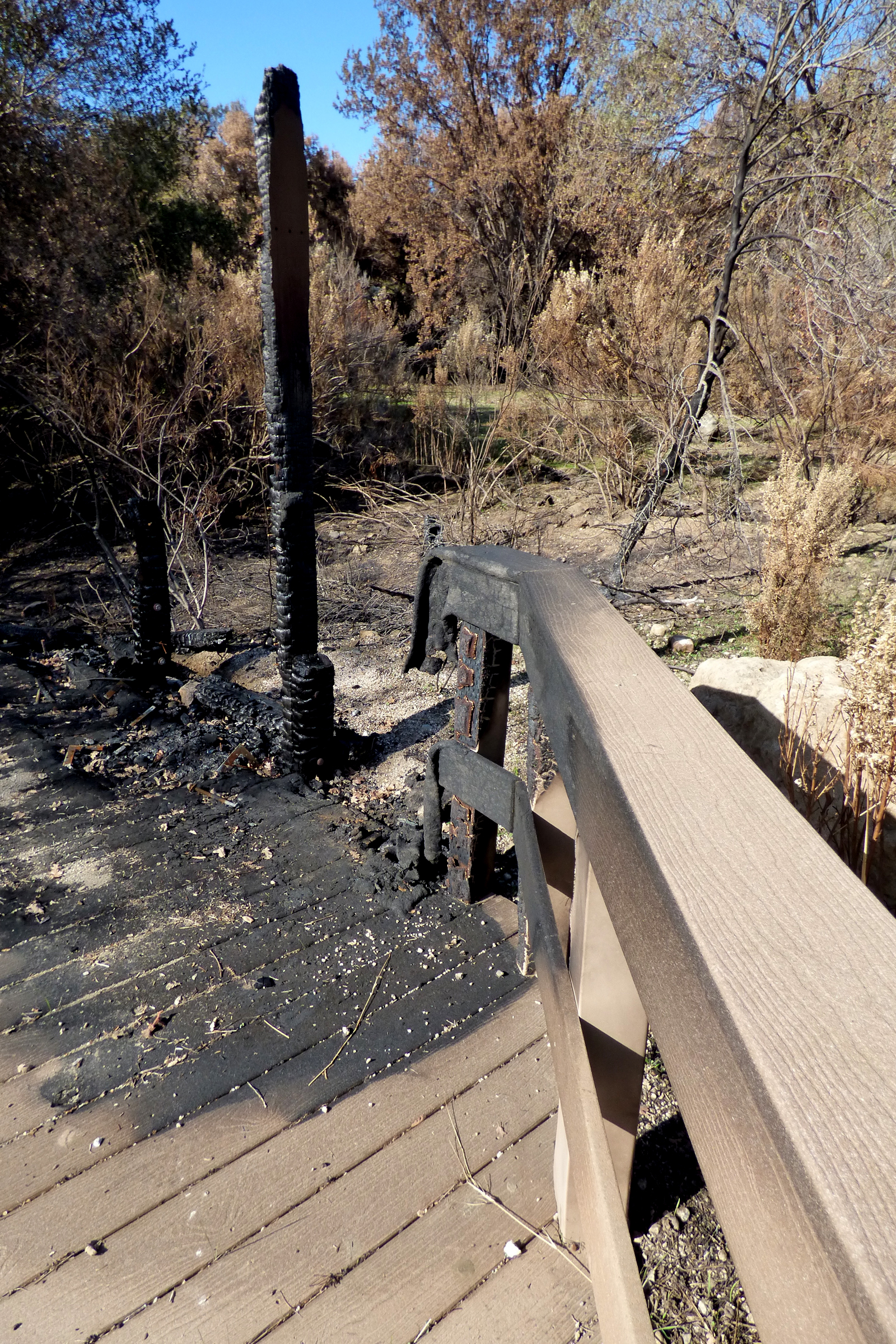 The stairs leading from the parking lot to the central trail through Malibu Creek State Park burned and melted, but the trail itself is in good shape, and open to visitors. 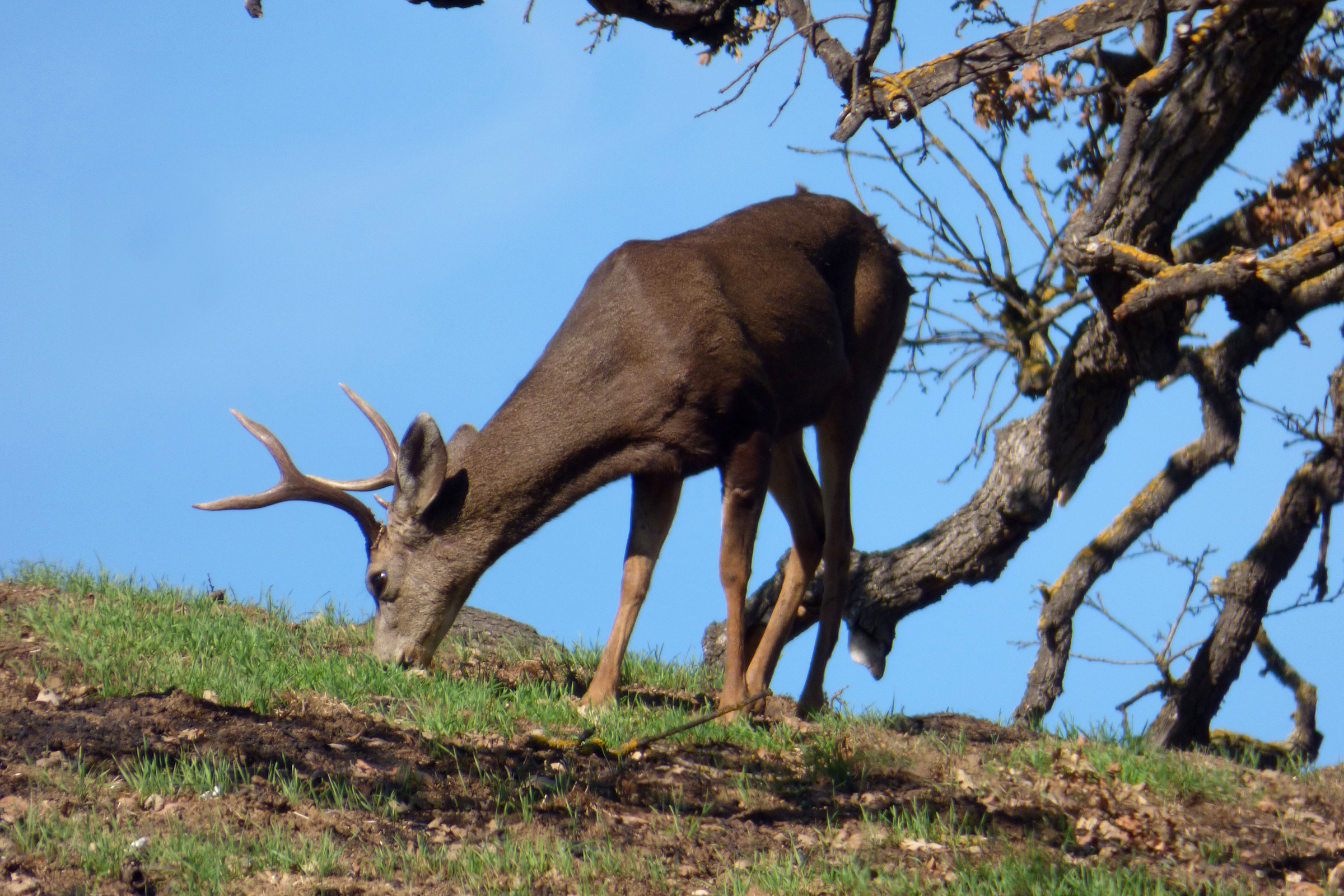 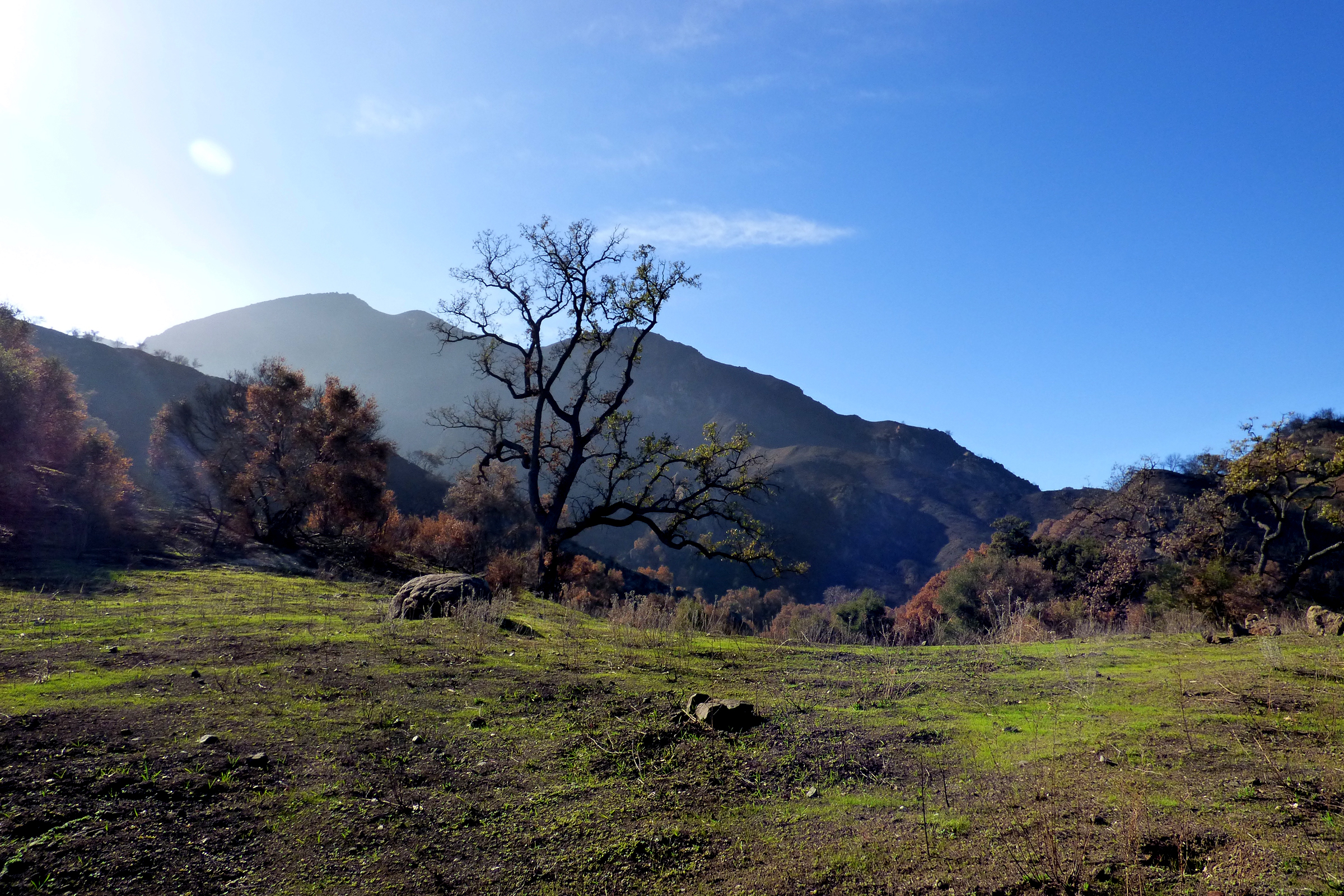 The fire moved quickly through the park, spread by the wind but also by embers. The oaks on the hillside are burned, but the solitary tree in the meadow appeared untouched.

Nearly half of the Santa Monica Mountains National Recreation Area (SMMNRA) was damaged by the Woolsey Fire, leaving many parks closed and limiting options for hikers, bikers, and equestrians.

The damage assessment and recovery process on National Park Service (NPS) parkland in the area is being impacted by the ongoing government shutdown that has shuttered National Parks across the nation, but California State Parks continue to make progress with restoring and reopening key sections of open space.

Leo Carrillo State Park’s backcountry and campground remain closed, but the beach is open, as is Point Dume State Beach, where the fire burned along the bluff but did not damage park infrastructure. Malibu Creek State Park is also once again open and the visitor center is open from noon to 4 p.m on Saturdays and Sundays.

The Messenger Mountain News had a quick look at the park the day it reopened, but it’s well worth a longer visit. This 8,215-acre open space offers not only a local alternative to Topanga State Park, which is experiencing an increase in visitors following the disaster, but it offers a fascinating, if macabre, look at the aftermath of the fire.

From the Cistern Trailhead above the valley floor, the park looks like a wasteland, charred and ashy, but at the main entrance on Las Virgenes Road, visitors are greeted with a vista of rolling green hills and spreading oaks.

Although much of the park looks as scenic and idyllic as ever, visitors are asked to stay on trails and out of closed areas because the fire has left serious hazards behind. From the trails it is easy to spot “stump holes,” places where a tree has burned completely, leaving a deep hole in the earth. Less easy to spot is the telltale discoloration on the ground around the stump hole that is a sign that roots have burned underground and a warning not to tread on what could potentially be a hidden network of hollow earth.

The fire left some trees untouched, some scorched around the edges, and others burned to ash. Guardrails along the road in look intact, but on closer inspection, the wooden posts supporting them are partially charred. The heritage Valley Oak that dominates the skyline at the entrance of the park is leafing out with new growth, despite evidence that the fire has hollowed out the trunk.

Trees like the heritage Valley Oak that are still standing but have been consumed with fire from the inside, are vulnerable to collapse.

The main trail through the park to Century Lake, and the old “Planet of the Apes” and  “M*A*S*H” film sites were heavily impacted by the fire. The hills on either side of the dirt road are blackened and almost entirely denuded, revealing odd fragments of the ranch’s history, first as a private hunting preserve, then as 20th Century Fox’s movie ranch. Bits of stone and concrete foundations and random scraps of plaster that were hidden in deep chaparral have been revealed, though new green growth is already visible everywhere.

Not everything burned. At Rock Pool, one of the most popular destinations in the park, the only evidence of the fire was the amount of silt deposited in the formerly deep pool, and a blackened sycamore, which appears to have burned from the inside out.

Although the fire damage is extensive, the park is still full of wildlife. On the day the Messenger visited, a herd of deer grazed serenely on the winter grass under the oaks. The sycamores by the creek were full of the much-loved, if non-native wild Nanday parakeets, who gathered to eat the tree’s star-like seed-capsules, while a red-tailed hawk circled overhead. The thick ashy silt deposited by the post-fire rains on the sides of the creek held the footprints of skunks, ground squirrels, and even a passing bobcat.

Malibu Creek State Park is once again open seven days a week. An all-day parking permit is $12 per car. A three-hour pass is $9, and a two-hour pass is $3. A leisurely stroll to Rock Pool or Century Lake and back generally takes at least two hours.

Limited, but free roadside parking is available on Mulholland Highway just west of the intersection with Las Virgenes Canyon. Although all backcountry trails are officially open, many were badly burned and are still rough. Rock Pool is well shaded, but the lack of shade in the burn areas can make for an uncomfortably warm walk. It’s a good idea to bring plenty of water, and to wear sunscreen and a hat.

More information on the park can be found at www.parks.ca.gov/?page_id=614. For upcoming activities at Malibu Creek State Park, including bird walks and other docent-led events, visit www.samofund.org/calendar.

*Note: the article was updated January 28 to reflect that the Malibu Creek State Park visitor center is indeed open to the public and not closed as previously stated.