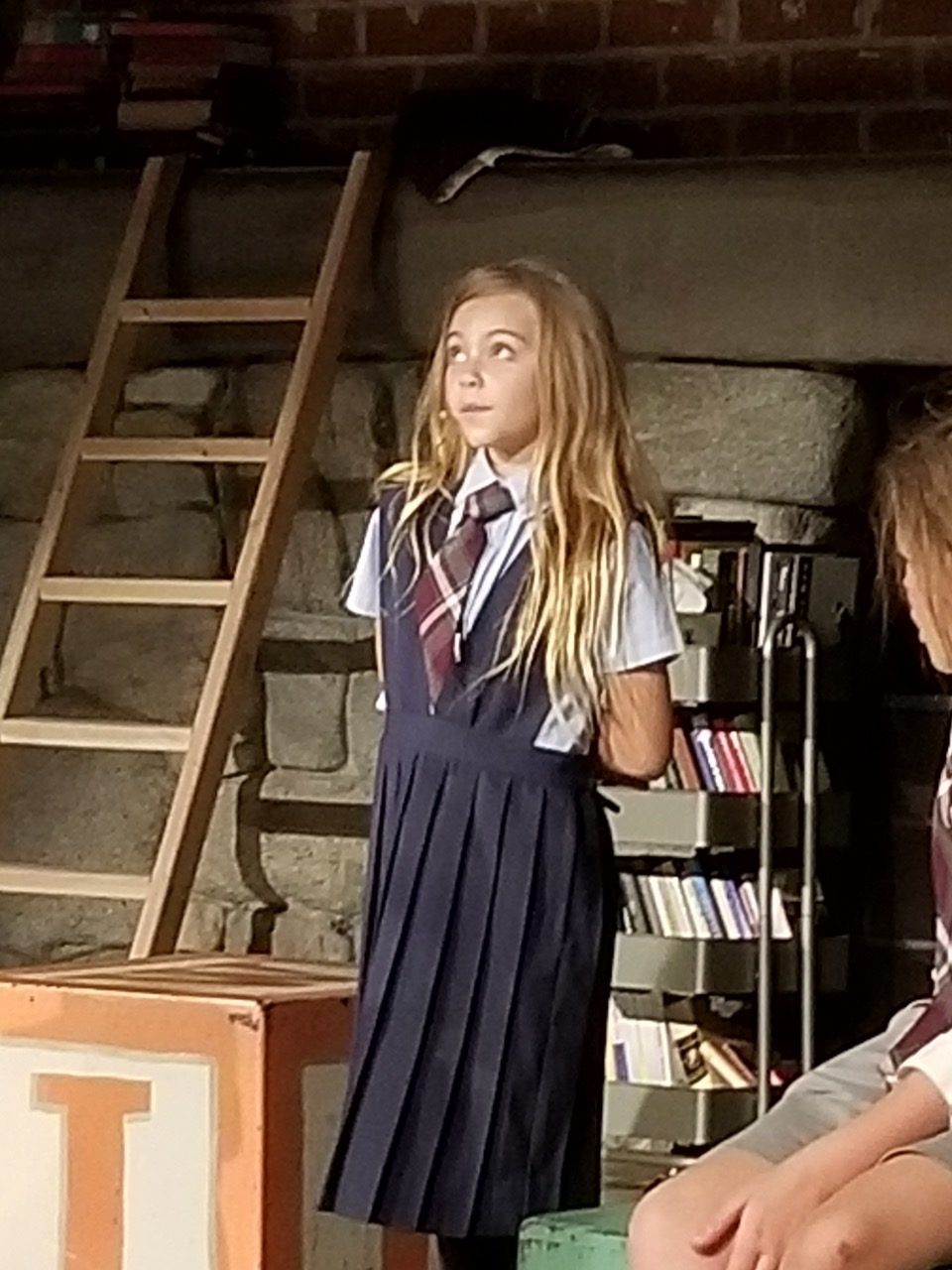 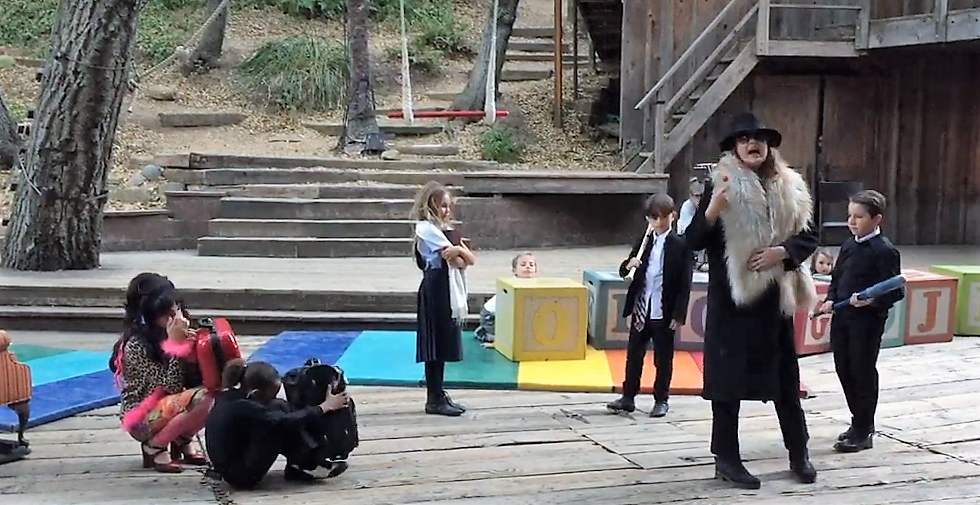 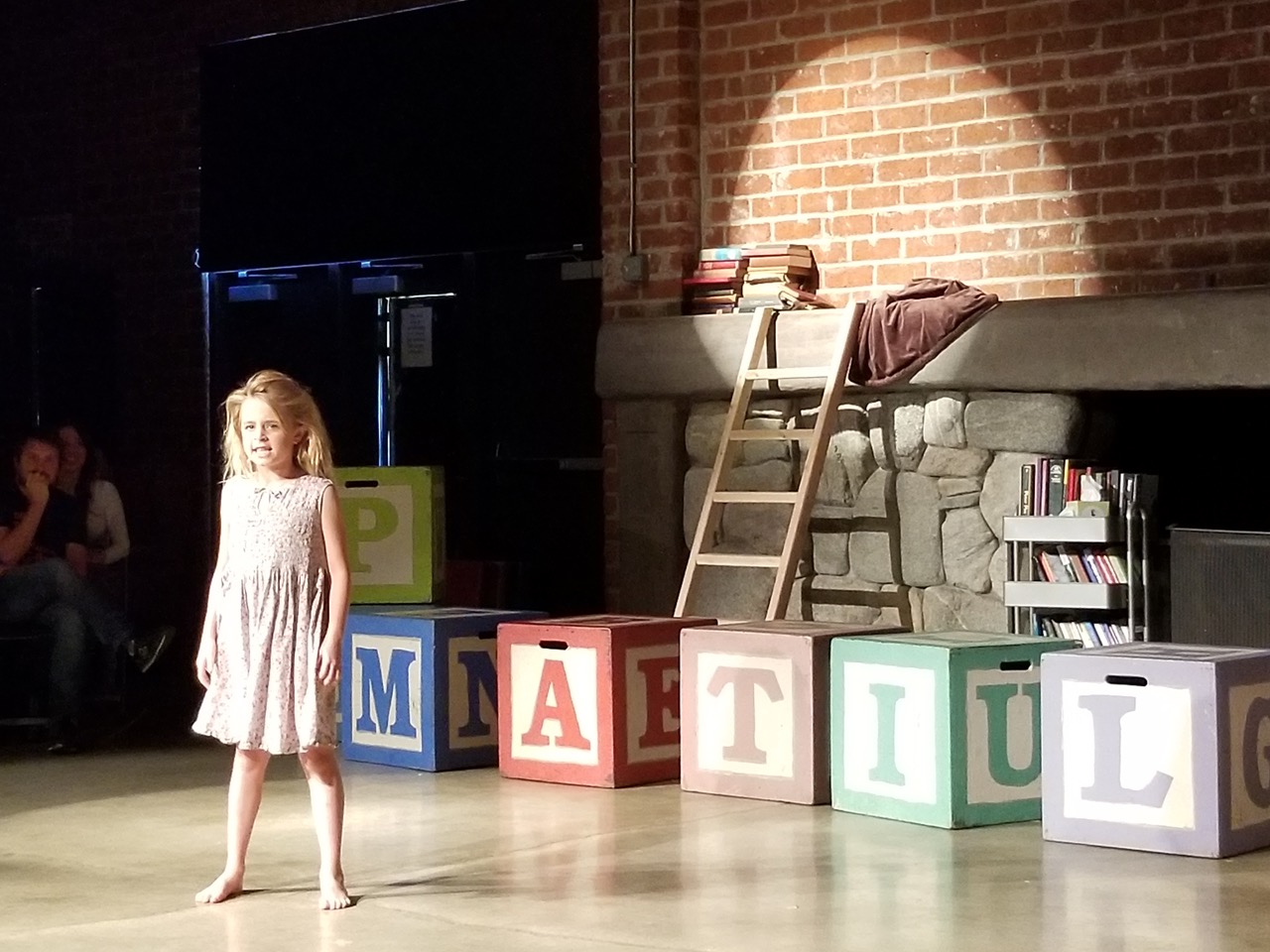 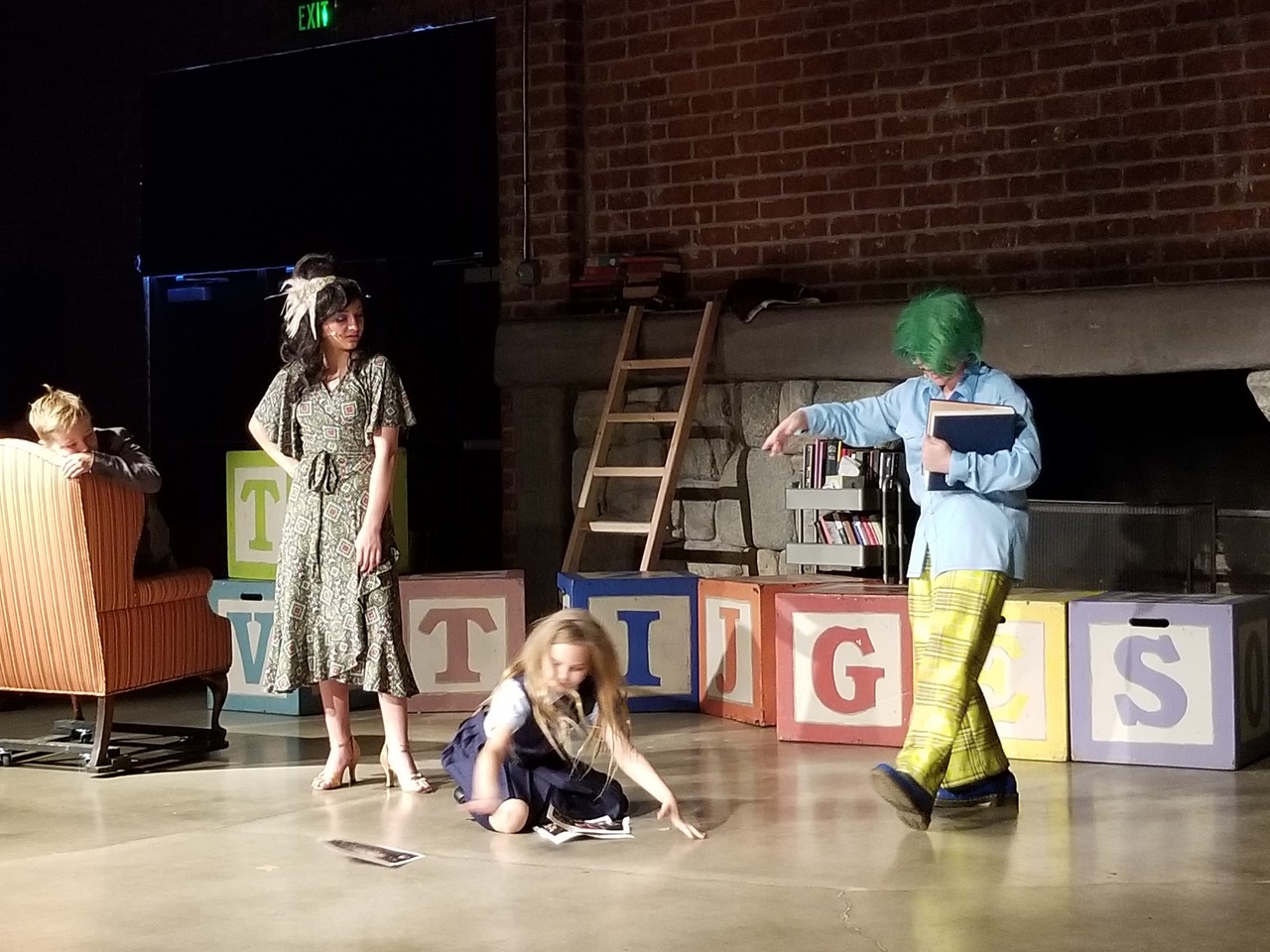 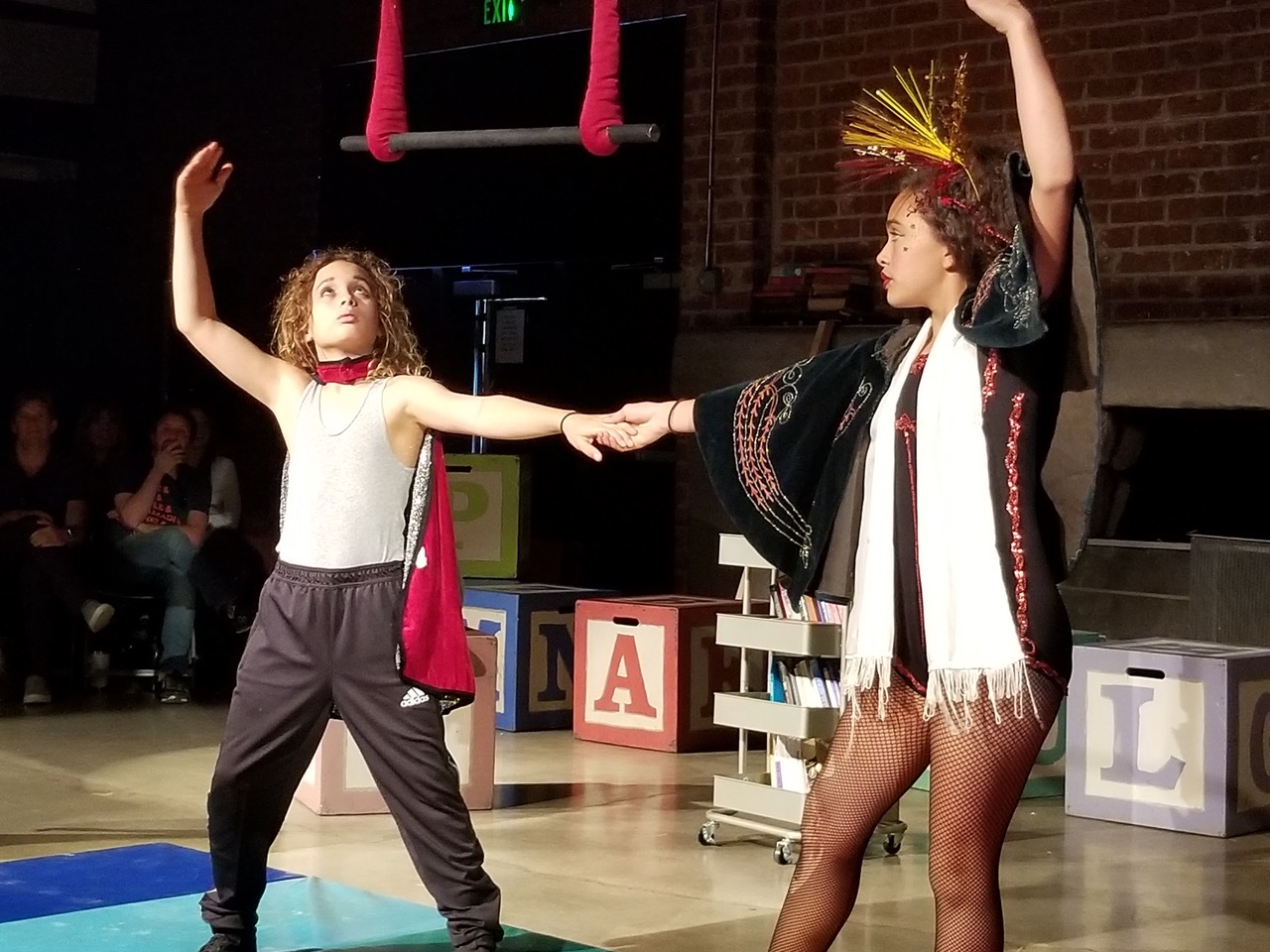 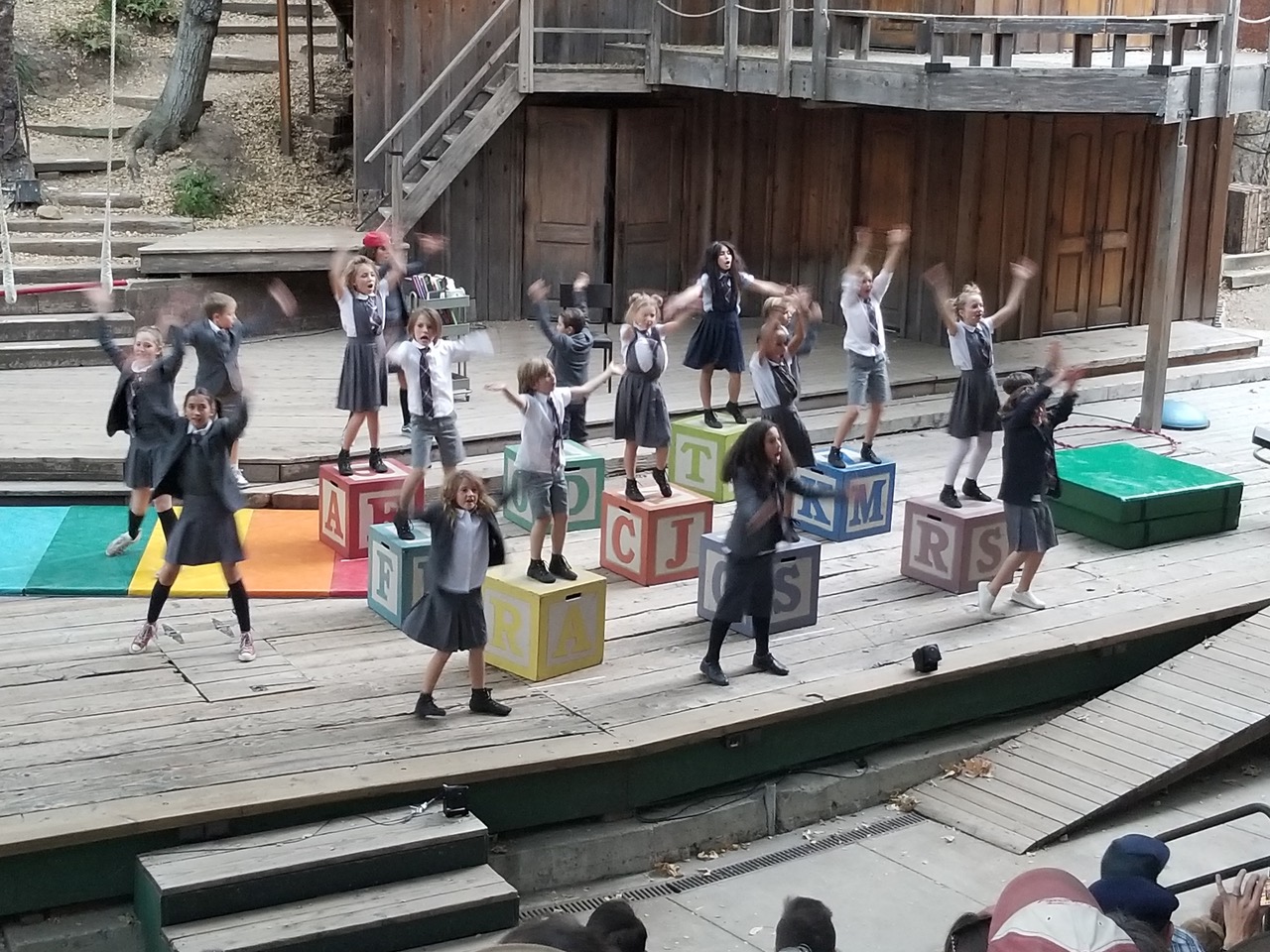 Despite a nearby four-acre fire that interrupted the Saturday afternoon and evening performances at the Topanga Community Center, the young actors quickly pulled it together for a final performance on Sunday afternoon when Will Geer’s Theatricum Botanicum came to the rescue and offered their stage. There’s no business like show business with a heart.

The latest youth musical to hit the boards in the Canyon was Roald Dahl’s Matilda the Musical that played at the Topanga Community Center (TCC) on Friday, Nov. 15, and Saturday Nov. 16 for just the first act due to a fire nearby that broke out around 2:35 p.m.

During the intermission,  the play’s director, Kristy Beauvais, calmly informed the audience that the second act of the show was cancelled, as well as that evening’s performance.

Remarkably, after striking the entire set from the TCC on Saturday, the show was completely restaged and somewhat rehearsed on Sunday morning for a final performance at 2 p.m. at Will Geer’s Theatricum Botanicum.

That is an outstanding example of the entire cast and crew living up to the theatrical tradition of “the show must go on!”

Technical problems plagued the production throughout, including issues with the lighting at the TCC, a sound system that made it nearly impossible to understand the dialogue through the microphones, and the way too loud music that prevented the actors from being heard.

Yet all the young performers knew their lines and choreography, adopted British dialects, hit their marks, and shined while singing and dancing their hearts out.

Winner of more than 90 international awards, including 23 for Best Musical, Matilda is the story of an extraordinary little girl—neglected by her parents because she wasn’t a boy—but who is armed with a vivid imagination, a sharp mind, a bit of telekinesis, and dares to take a stand to change her own destiny. She is also “a little bit naughty!”

The Topanga production was the result of the efforts of FOCUSFish, the non-profit that brought the circus to the canyon with their aerial arts pavilion at the Cali Camp/Manzanita campus, which has expanded to bring children’s musical theater to Topanga.

FOCUSFish founder and Matilda director Kristy Beauvais, along with her producing partner, Jill Williams, have been creating shows for more than ten years with their musical productions at Topanga Elementary.

In this production Matilda featured more than 35 actors between the ages of 7 to 13 from six schools, including Manzanita, Topanga Elementary, Topanga Mountain School, Viewpoint, Waldorf, Paul Revere, and many homeschoolers.

During the show, several performers really stood out, including tiny Maxine Hexum as the Young Matilda and, of course, the amazing Sailor Ramos as the older Matilda, who acted, danced, and sang her way into our hearts.

Playing the adorable Little Kids were Mahina Choothesa-Sargis as Alice; Anika Williams as Luce; Echo Hexum as Horensia; Macie Kennedy as Eric; Bo Schmid as Tommy; Freddie Fulcher as Nigel; Brodie Beauvais as Amanda and Tallulah Gandee, who had some hilarious bits as Lavender.

Matilda’s cruel and clueless parents were played by Charlie Burrows as Mr. Wormwood and Aurora Finetti as Mrs. Wormwood.

Burrows had some clever moments singing “Telly,” and Finetti’s amazing performance of “Loud” was a real showstopper.

Tanner Boynton played Matilda’s brother, Michael, alternately indulged in and ignored by their narcissistic parents, and was double cast as The Cook. Cassius Brown nearly stole the show with his comic antics as Mrs. Wormwood’s dance partner Rudolfo.

Cheering Matilda on was her demure schoolteacher, Miss Honey, played by Allegra Frost, who performed touching renditions of “This Little Girl,” “I’m Here,” and “My House.”

Sophie Sexton was also wonderful as Mrs. Phelps, the sweet librarian who not only encouraged, but was addicted to Matilda’s fantastical stories.

Helping to spin Matilda’s tales were the Escapologist and his wife, The Acrobat, each well played by Wolf Momoa and Lola Momoa.

Naturally, there must be a villain and Emma Farkas camped it up and brought down the house as the evil Miss Agatha Trunchbull, the school’s headmistress.

Filling out the cast were Santo Wagstaffe as the Doctor; Gaia De Mesquito as the Nurse; Birdie Douglass as the Puppeteer; and Phoebe Krull, who stole the show as Sergei, the Russian Mob Boss, assisted by Henchman No. 1, Henry Whittenberg and Raiden Ray as Henchman 2.

The Aerialists, Chloe Gaines, Gaia De Mesquito, Bodhi Lae and Satya Finch took to the trapezes to the great thrill of the audience.

What Beauvais took on, in her own words, “a challenging family theater production,” was an ambitious task, not the least of which was the last-minute restaging with 35 young actors and crew. Together, Team Matilda made it all work. Brava! Bravissimo!

As Beauvais writes in her director’s letter: “Let’s continue to address bullying and empower our children with love and community. Like Matilda, let’s never be afraid to say, ‘That’s not right!’”

The production team was headed by Jill Williams, who helped put the whole show together. The music director was Gabbi Beauvais; choreographer was Kristy Beauvais; set building and trapeze rigging were designed and constructed by Paul Beauvais; and Sabrina Zeri did the scenic painting and props.

Jewels Nation was the stage manager; lighting and video was designed by Tom Mitchell, who also provided the sound with Glenn Gaines, while Richard Brody manned the spotlight at the TCC. Eliza Schneider was the dialect coach and Paulina Plopa was the junior dialect coach.

Gabbi Beauvais and Mikayla Williams did hair and makeup and the backstage moms, Destiny Finetti and Tanya Farkas, wrangled the kids and costume changes. Bonnie Graves and Hilary Boynton provided the concessions.

Roald Dahl’s Matilda, the Musical, is still a big draw in London, on Broadway, and in touring companies throughout the world. It is based on Dahl’s 1988 children’s novel of the same name. The Tony Award-winning musical was adapted by Dennis Kelly, with music and lyrics by Tim Minchin, which was later made into a movie starring Danny DeVito and Mara Wilson.