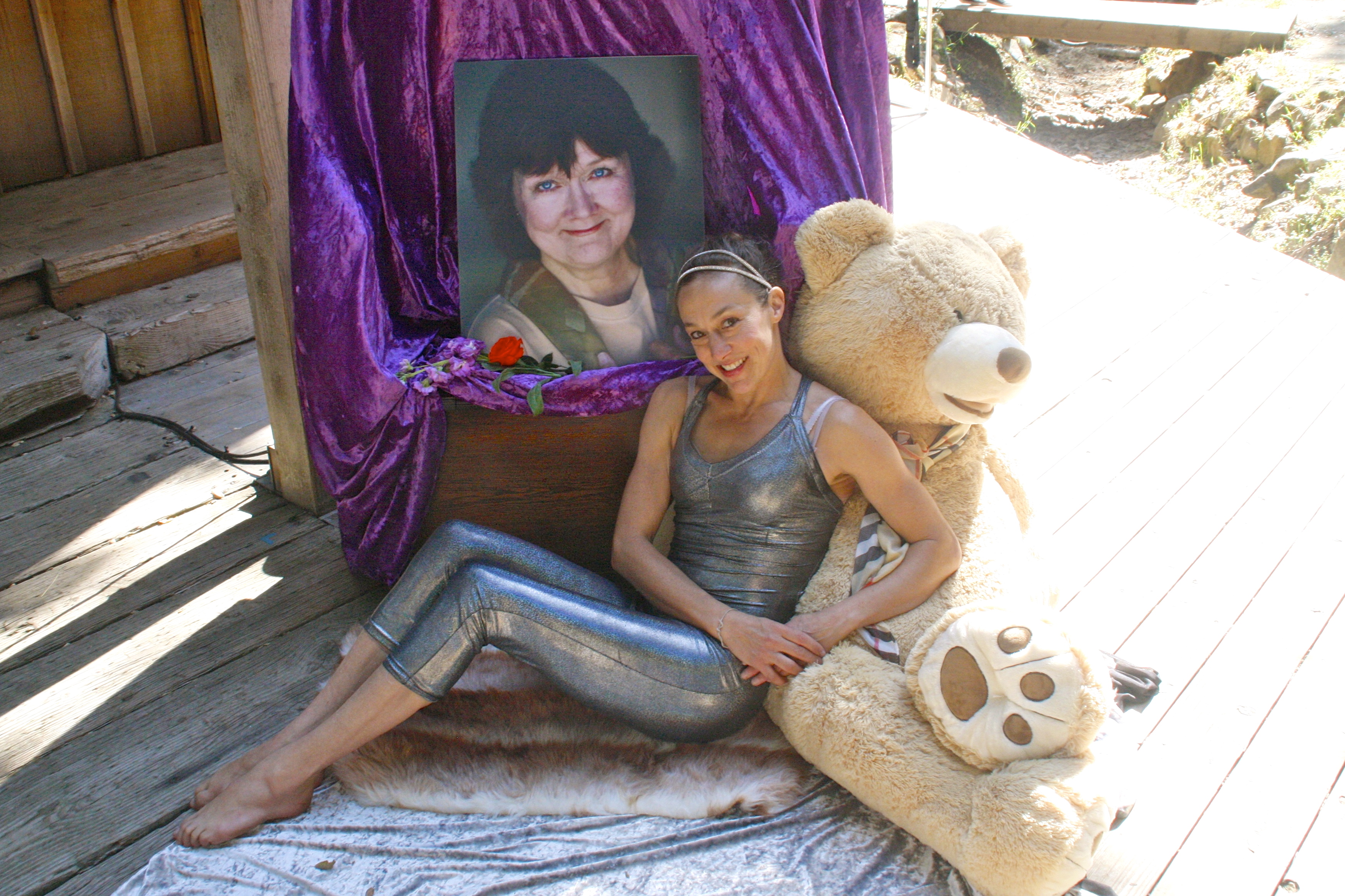 Lexi Pearl poses with a photo of her late mom Karin Woodward who no doubt proudly watched over her talented daughter’s show. Photos by Katie Dalsemer 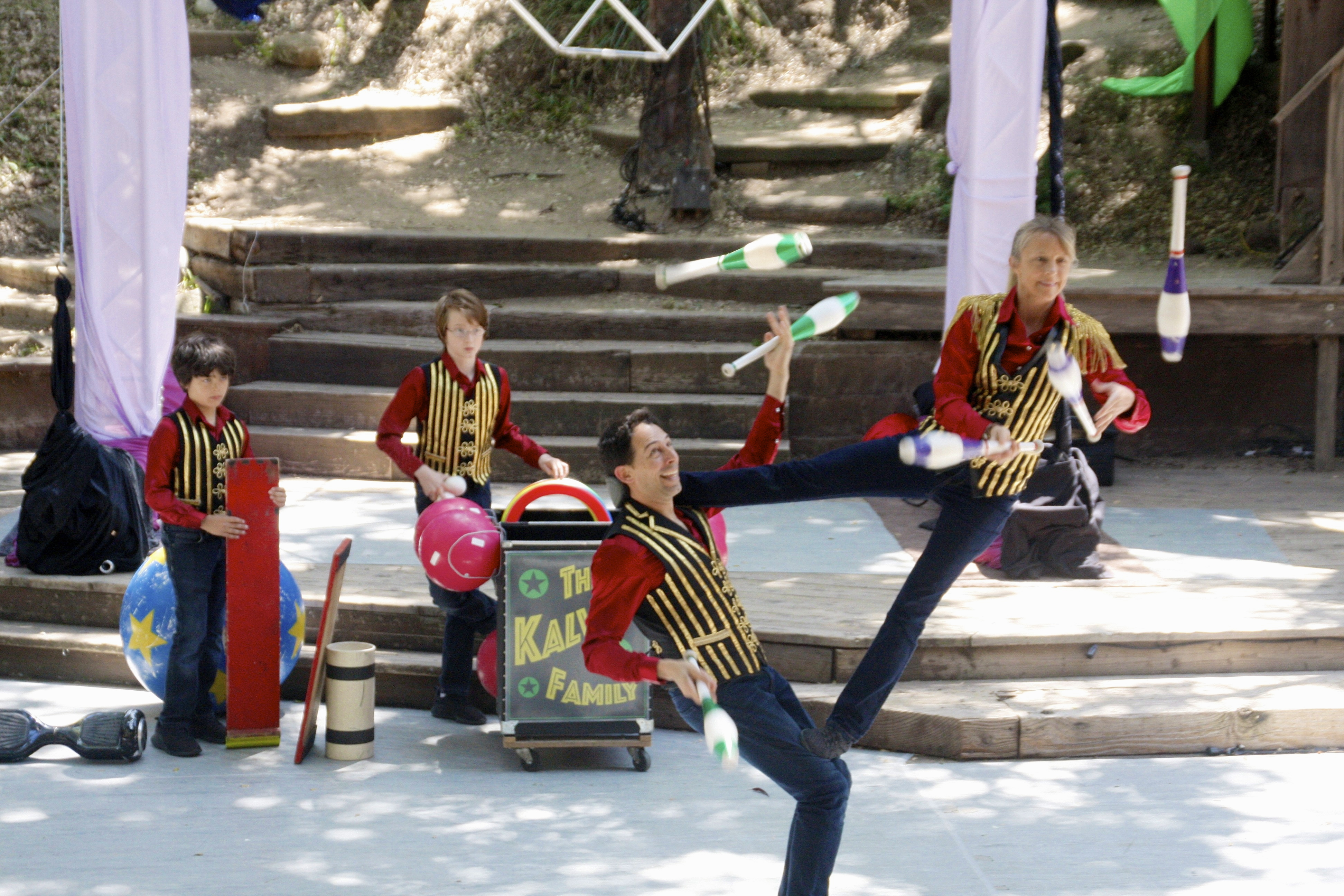 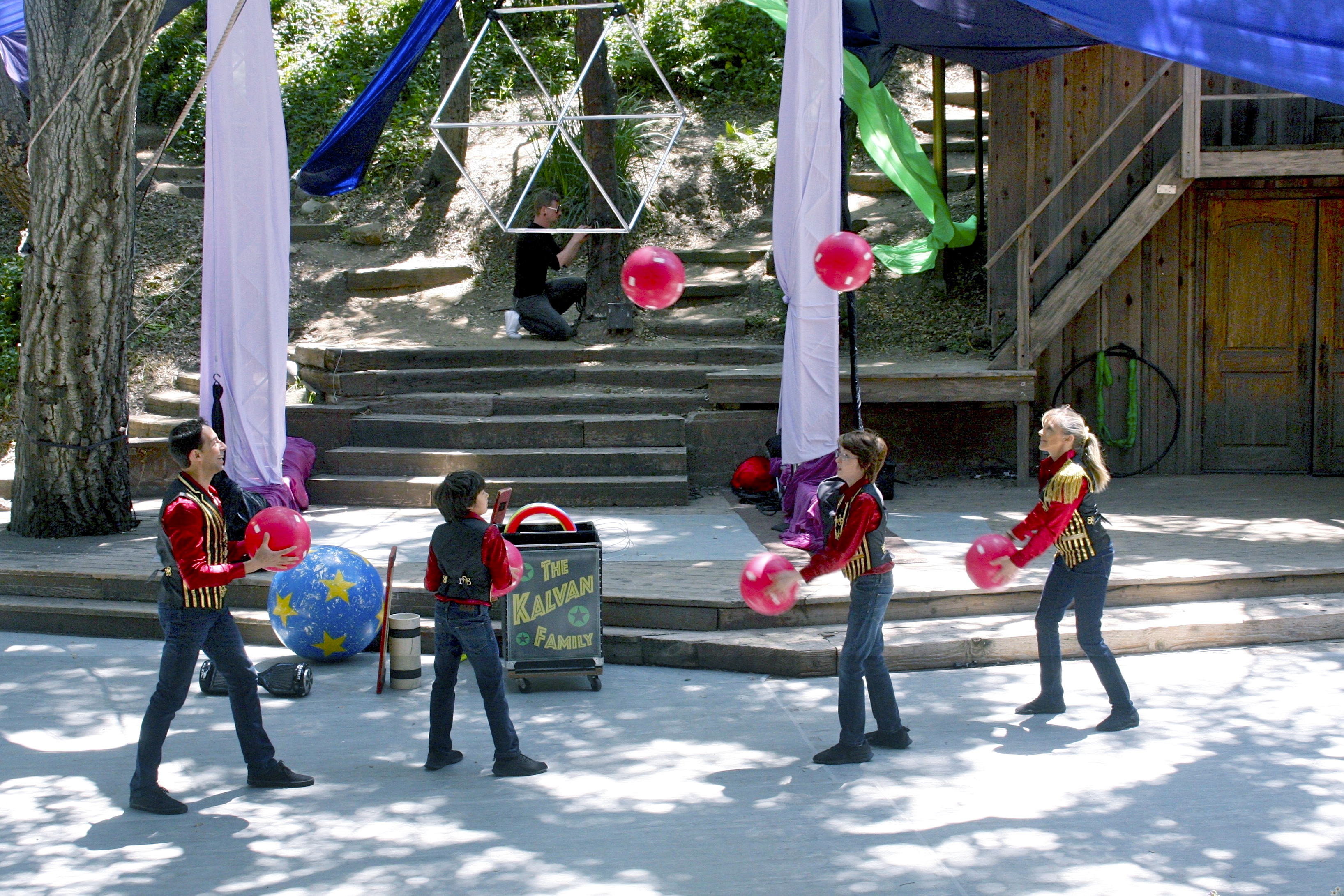 Kalvan Family—The sold-out line was so long, the Kalvan Family of jugglers went through their repertoire and then some, inviting youngsters up to the stage to try balancing bowling pins on their finger until everyone was seated and the show began. 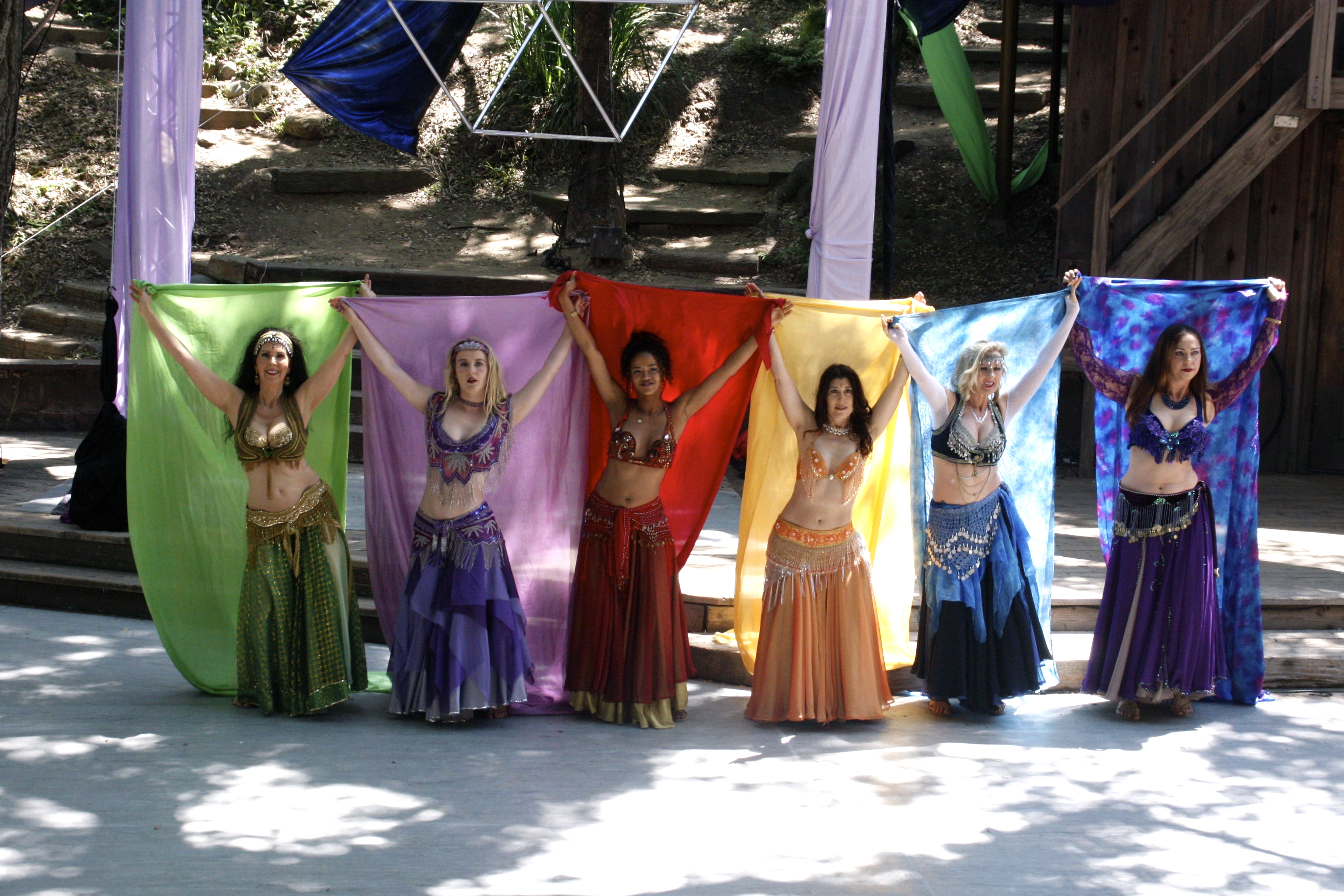 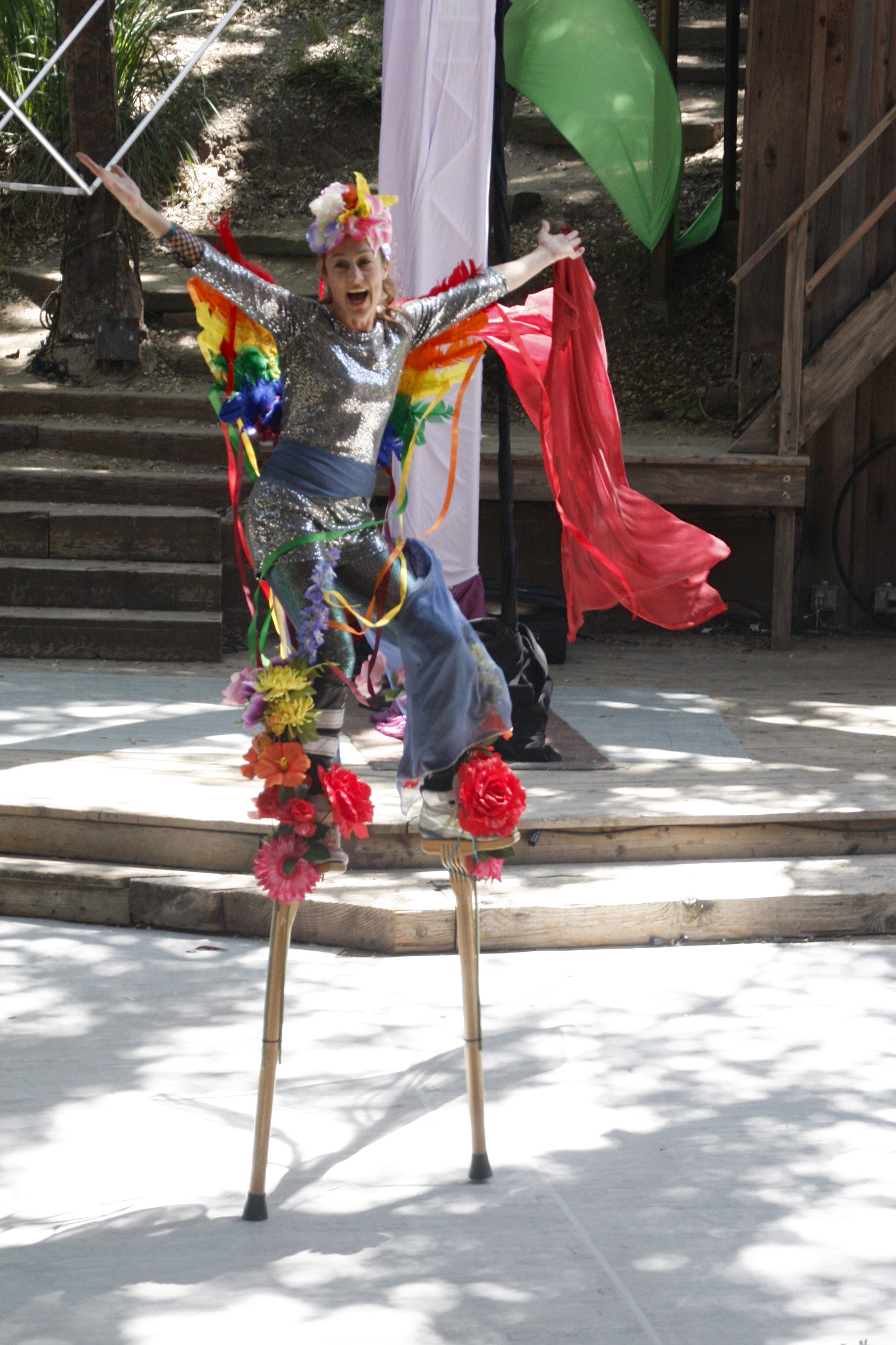 Lexi Stilts – Lexi Pearl, creator of MOMentum Place made a grand, colorful entrance on stilts as she welcomed everyone, honored her late mother, Karen Moran, and made a costume change from stilt-walker to aerialist. 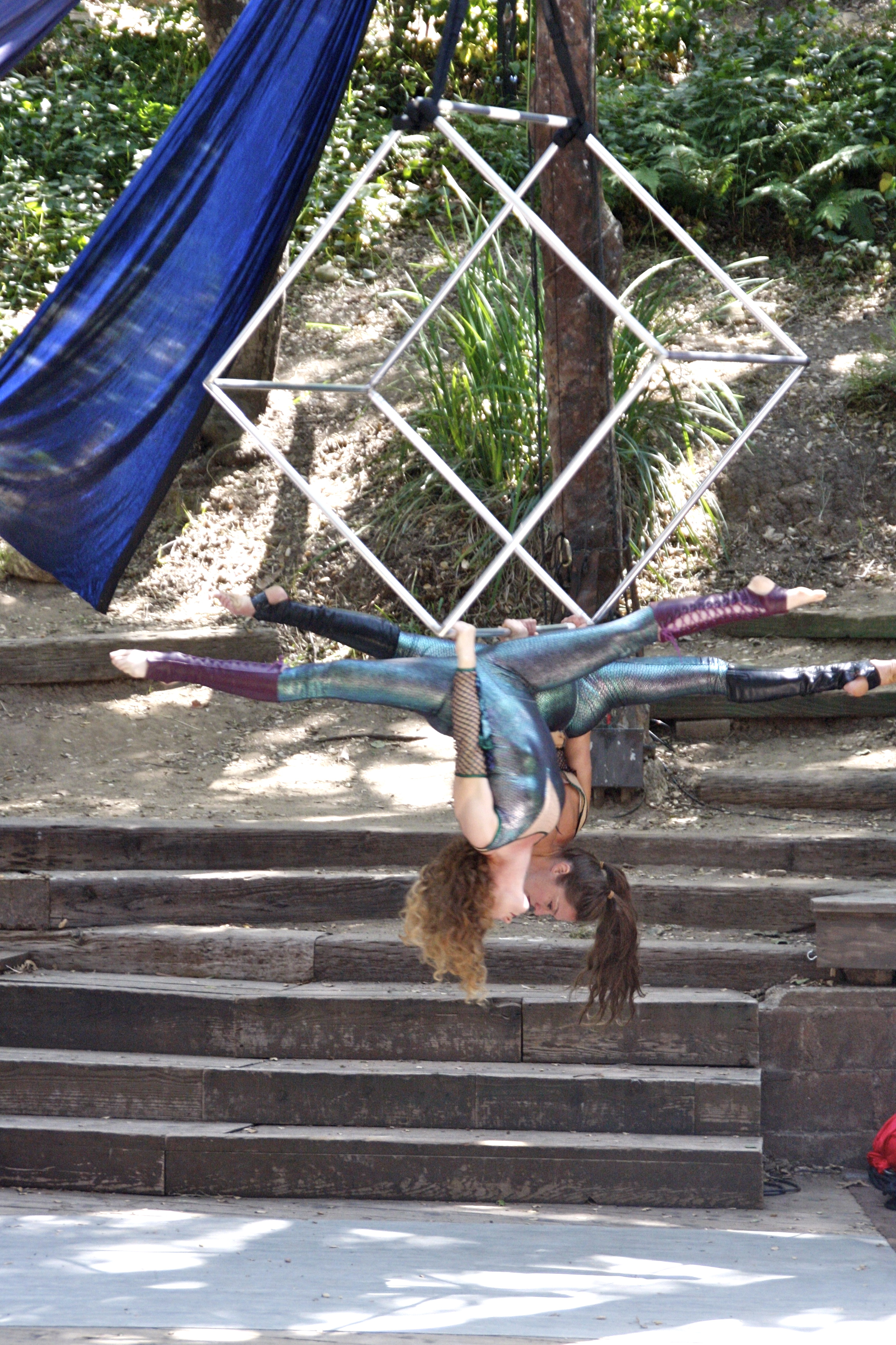 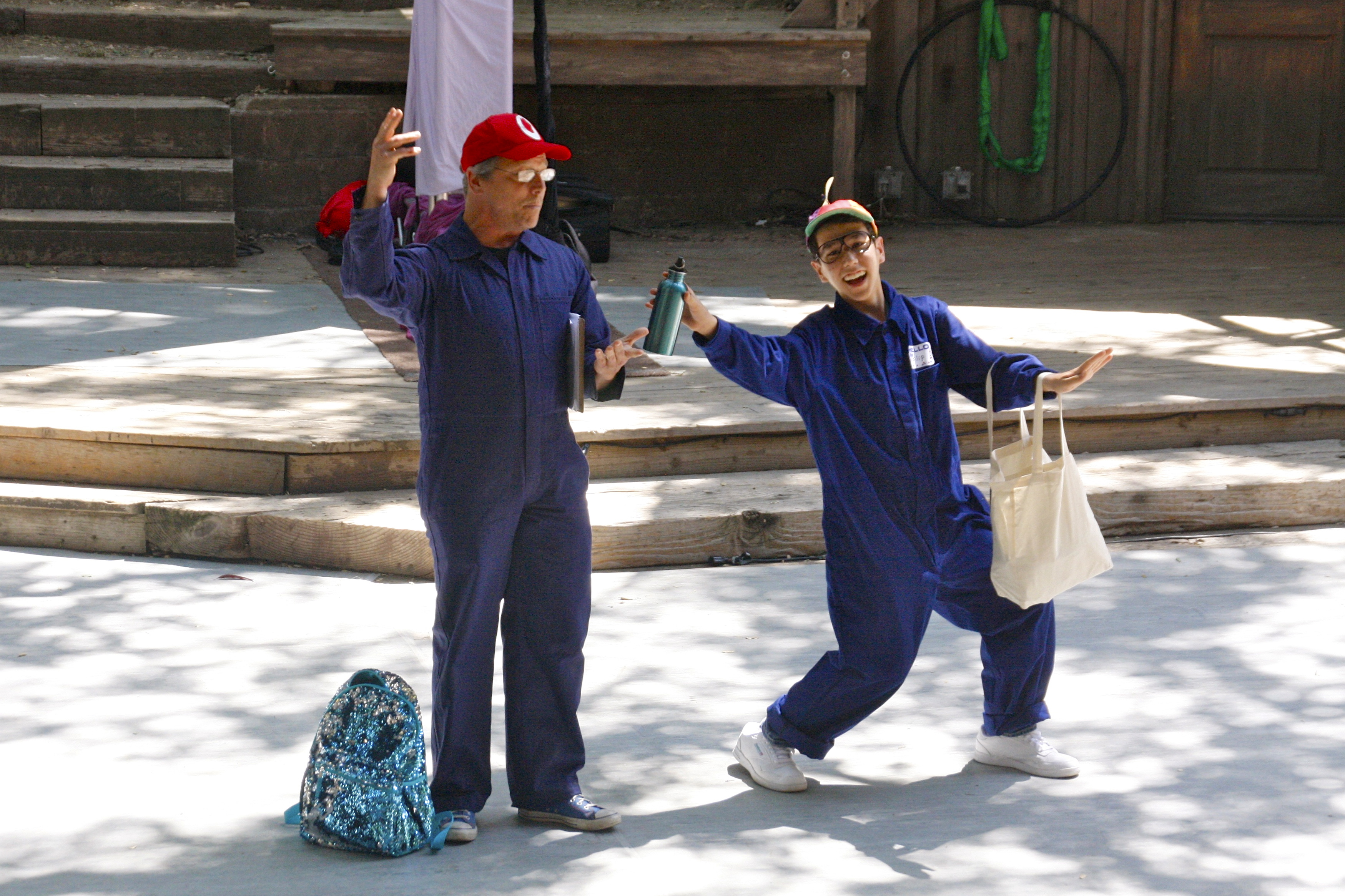 Zero Waste Manager Eric Newton (L) a talented aerialist in his own right, along with along with his trusty sidekick Teo Lin-Bianco, talked about his passion for this year’s Zero Waste event, where everything would be reused, recycled, or composted. 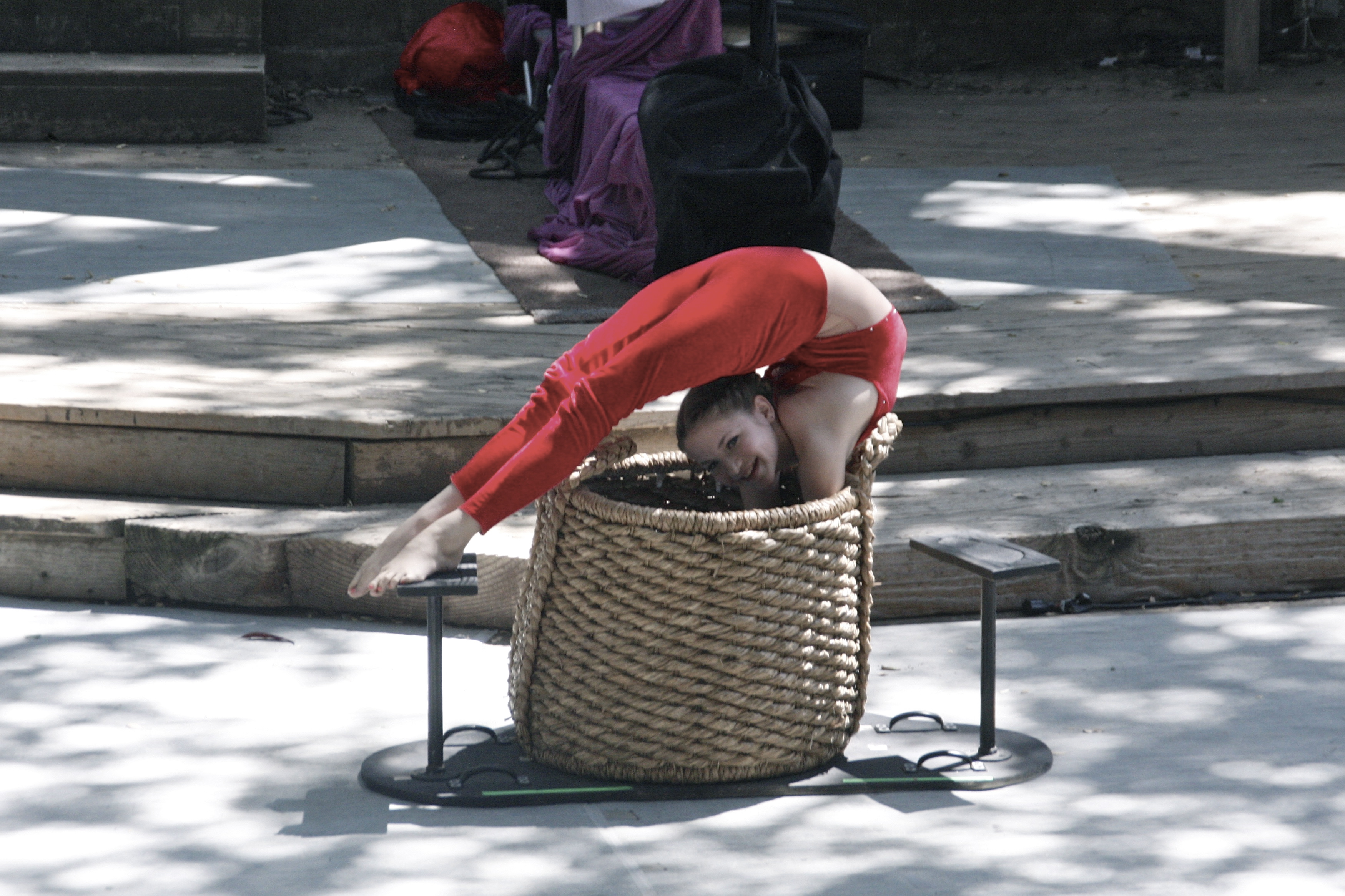 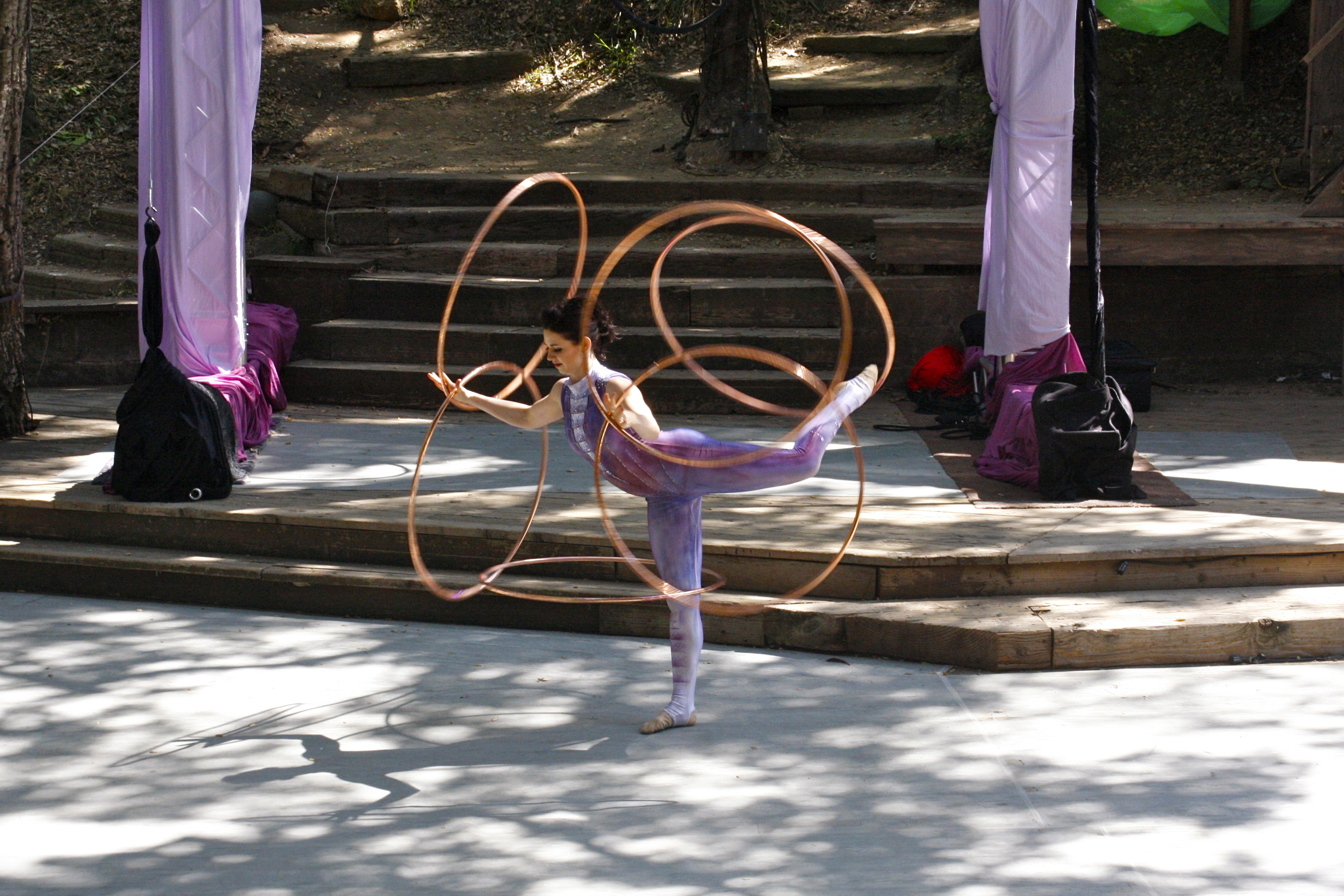 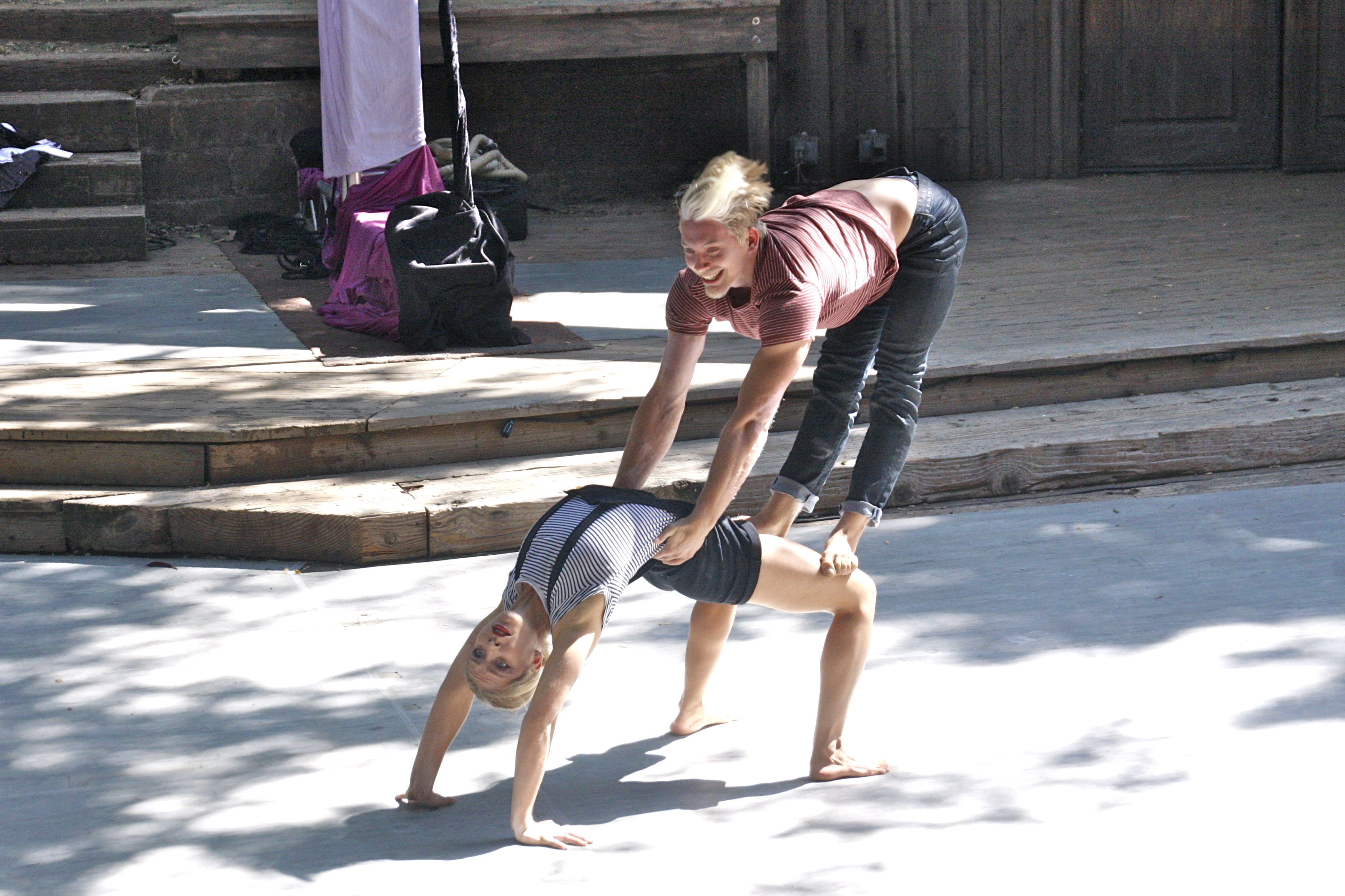 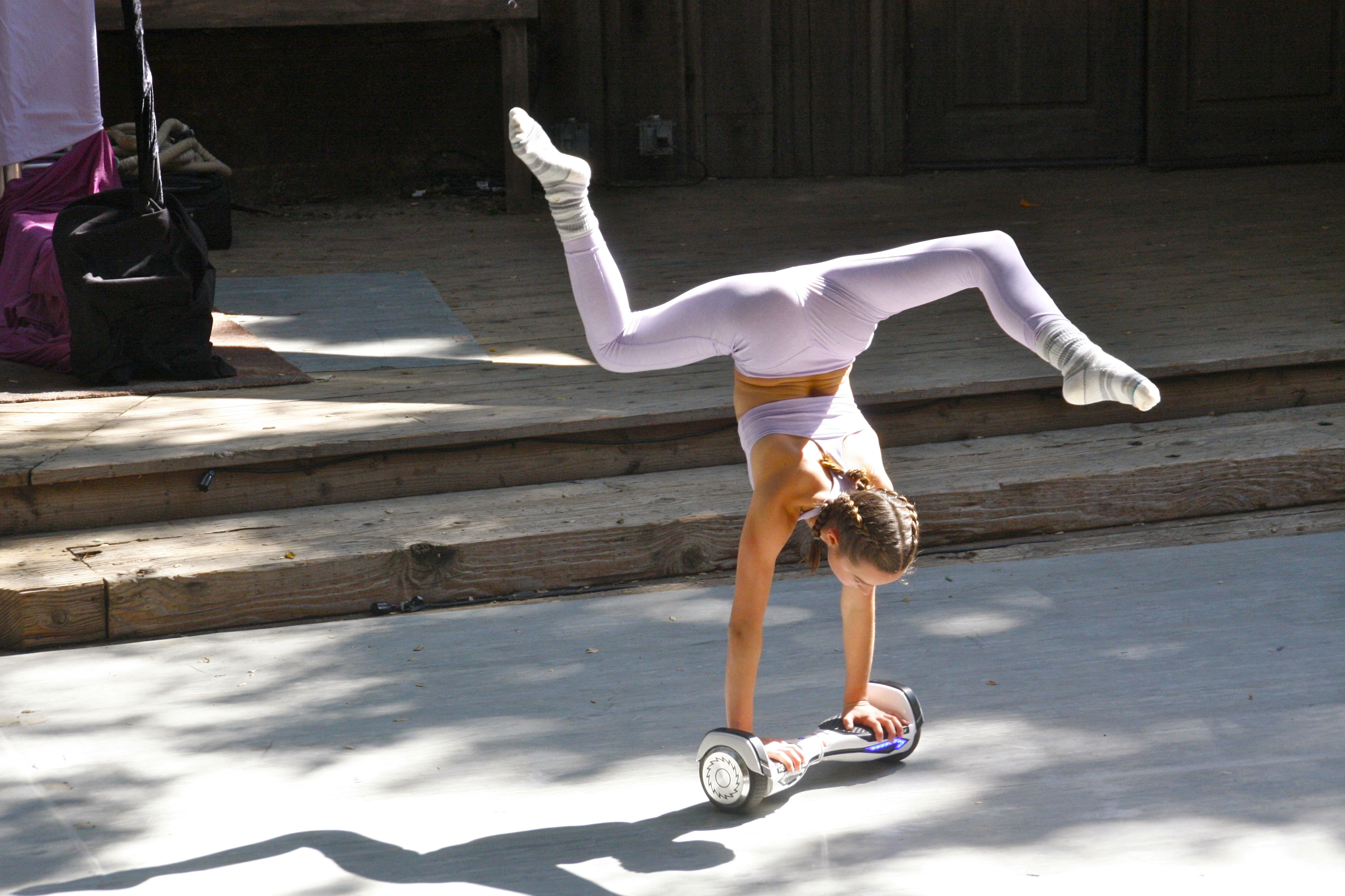 Georgia Bryan showed that a hoverboard is more than just a cool mode of transportation.

It must have been the soft spring air that made the afternoon so magical as the warm sun streamed through the ancient oak trees at the Theatricum Botanicum on Sunday, May 12.

The occasion was Mother’s Day and the performance at the rustic outdoor amphitheater was the 21st Annual MOMentum Place with Topanga’s own Lexi Pearl and her talented troupe who create a fantastical world of aerial and circus acts to perform feats of wonder.

Prior to the performance, early birds enjoyed a delectable catered buffet prepared by Chef Layne Sanden and served in Theatricum’s bucolic gardens (The buffet required a separate purchase, and because this was a Zero Waste event, everything was composted, recycled, or reused).

The mainstage show began with the Kalvan Family Circus featuring Jeri and Jack, Max, and Oz Kalvan as they performed amazing feats of juggling. Because the line for the sold-out show was so long, the Kalvans ran through their repertoire and probably invented some new juggling feats. Children were invited to the stage to try some of the balancing tricks themselves until everyone settled in.

Lexi Pearl, creator of MOMentum Place in honor of her late mother, Karin Woodward, suddenly entered the stage on stilts festooned with feathers and flowers. She welcomed everyone and asked how many of them were attending a Theatricum show for the first time—an astonishing fifty percent raised their hands. As she ran through the program we were about to witness, she made a costume change from stilt-walker to aerialist and introduced the first performers.

In a hilarious segue, former Cirque du Soleil aerialist Eric Newton hit the stage as the “Zero Waste Manager,” and explained to the audience why no plastic bottles would be sold that day and why they handed out no printed programs for the show. In fact, everything at the show was recyclable, reusable and compostable, with the message being to continue this earth-saving trend into the future.

The show continued with 12-year-old contortionist Emerald Gordon Wulf—who slowly emerged from a basket, one foot, one hand at time, and bent and twisted her tiny body into unmanageable shapes—all while sporting a huge smile on her face!

The young Tyler Jacobson took the stage where he posed and balanced on elevated “canes” first on one arm, then another, in an amazing feat of grace and strength.

A beautiful, death-defying routine on the high wire by Tia Matza brought the house to tears—Oh, to be so young and fly so free.

Comic juggler Grant Bishop followed with a clever act to laughs and cheers from an appreciative audience.

With a beautiful Corde lisse act combining mime and an aerial routine, Fosse Lin-Bianco and Makenna Susman amazed the audience with their amazing skill. Corde lisse is an aerial circus skill or act that involves acrobatics on a vertically hanging rope—the name is French for “smooth rope.”

Master comic ventriloquist Karl Herlinger then appeared downstage center and introduced his “naked” dummy, a talking head with no body, who ran Herlinger through a ventriloquist’s alphabet in a hysterically funny routine. How do ventriloquists manage to speak plosives and sibilant letters without moving their lips? What a privilege to experience such talent right here in town!

Jacqulyn Shaw, performed on the Lyra (cerceau/cerceaux), an aerial apparatus of circular steel resembling a hula hoop suspended from the rigging.

Next came Nata Ibragimov in a magical display twirling golden Hula hoops that spun and sparkled in the sun.

Elena Brocade performed her gender-bending Spanish web act to the song, “It’s a Man’s World.” The Spanish web is an aerial circus skill, similar in appearance and style to Corde lisse. While spinning, the performer can hold on to the web in addition to hanging from the loop or  releasing the rope and spin while a spotter on the ground turns the rope.

Just when you thought it couldn’t get any better, enter the brilliant acro-duo act Megan Vaughan Giesbrecht and Axel Osborne, who delighted the audience with amazing feats of comedy, dance, and acrobatic skill worthy of Cirque du Soleil.

Proving that a hoverboard is more than just a cool mode of transportation, Georgia Bryan’s routine was one of grace and beauty in motion.

The spectacular finale had Lexi Pearl introducing Inara George, who sang an original song dedicated to Lexi’s late mom, while Lexi took to the red silks in a heartbreaking yet triumphant tribute to the reason for MOMentum Place and why it has happened on Mother’s Day for the last 21 years.

After the final bows, the performers walked among the audience giving each a flower in tribute to mothers everywhere.

What it Takes to be a Dad

Save Trees! Become a Detection Detective!