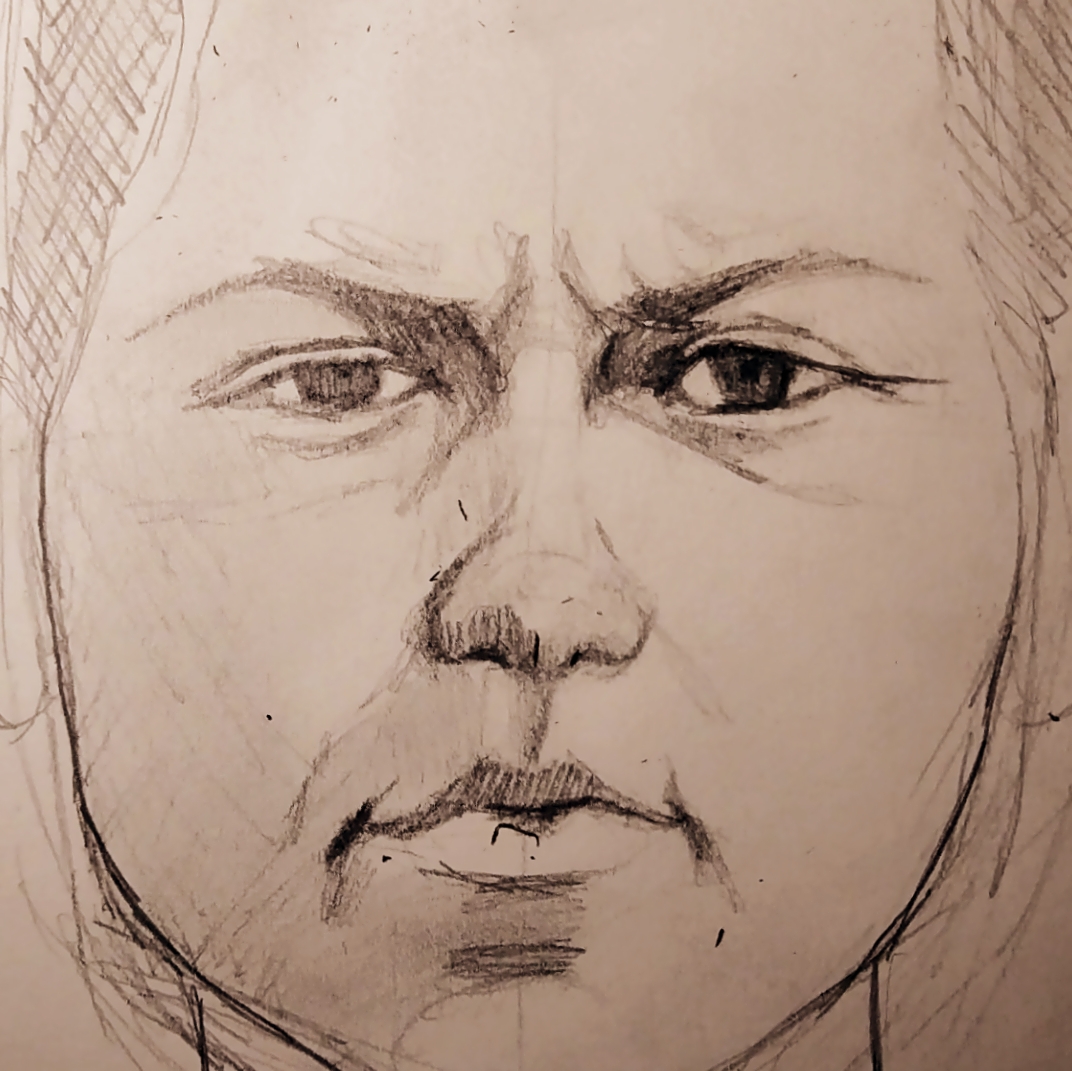 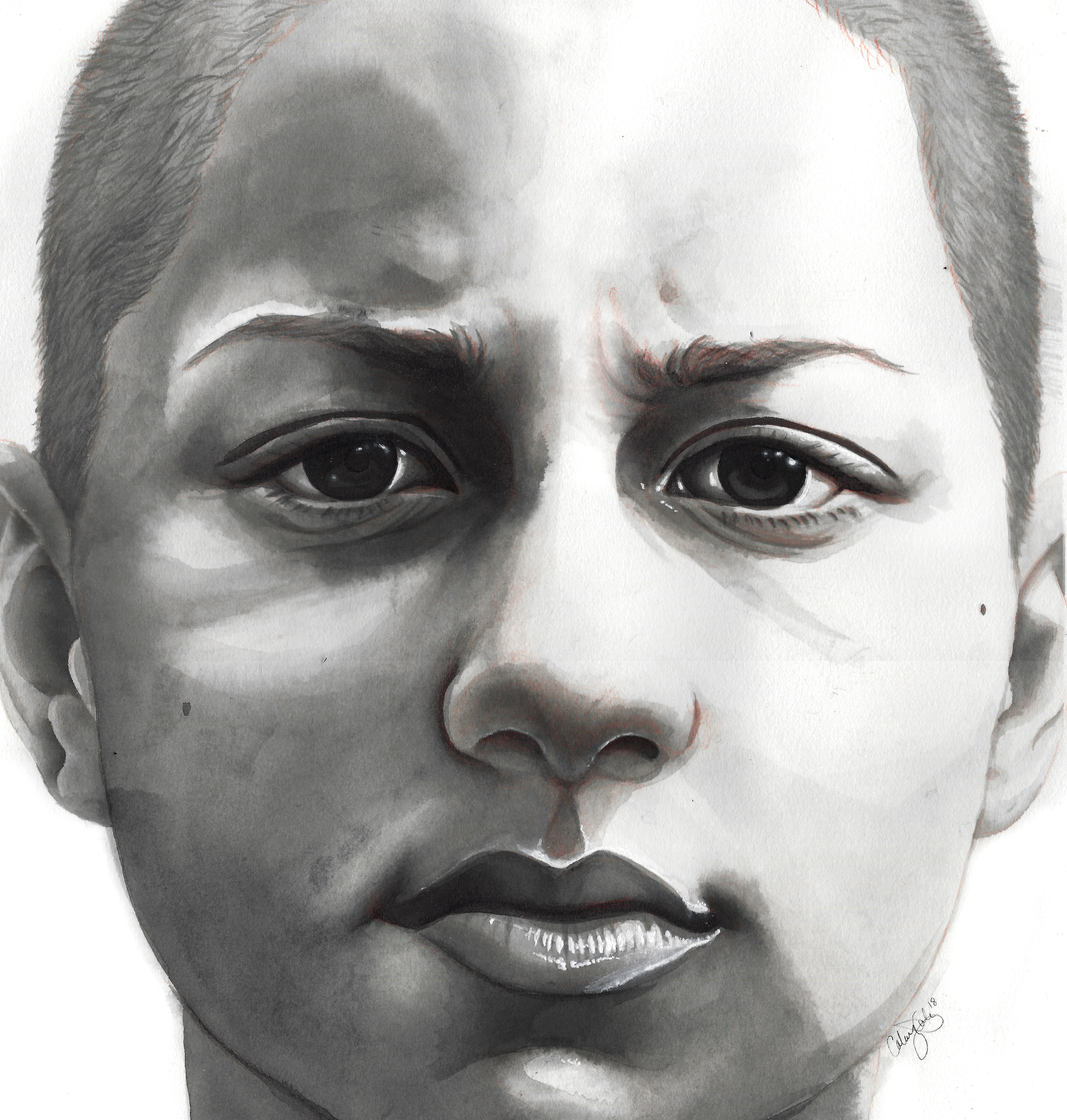 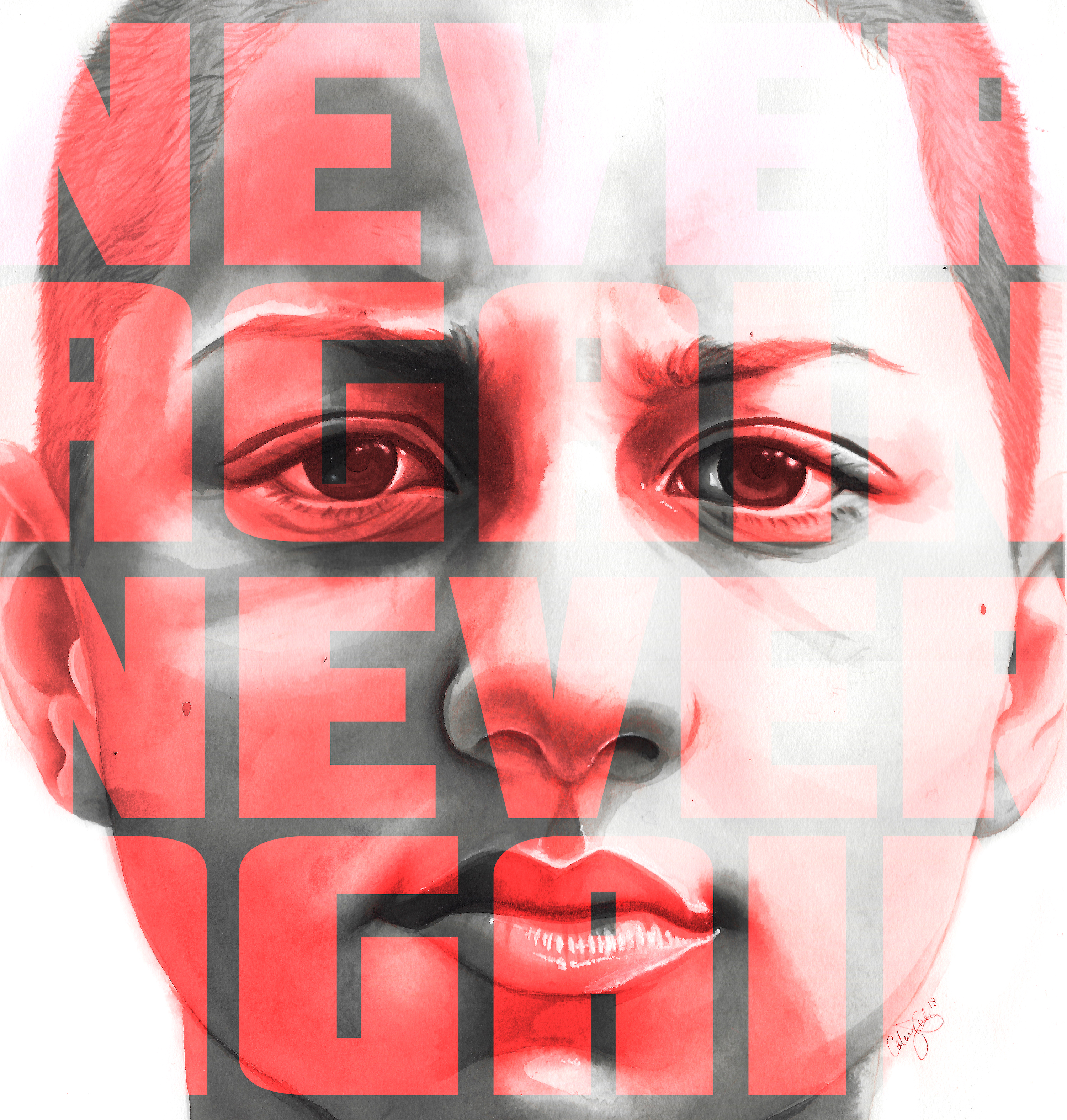 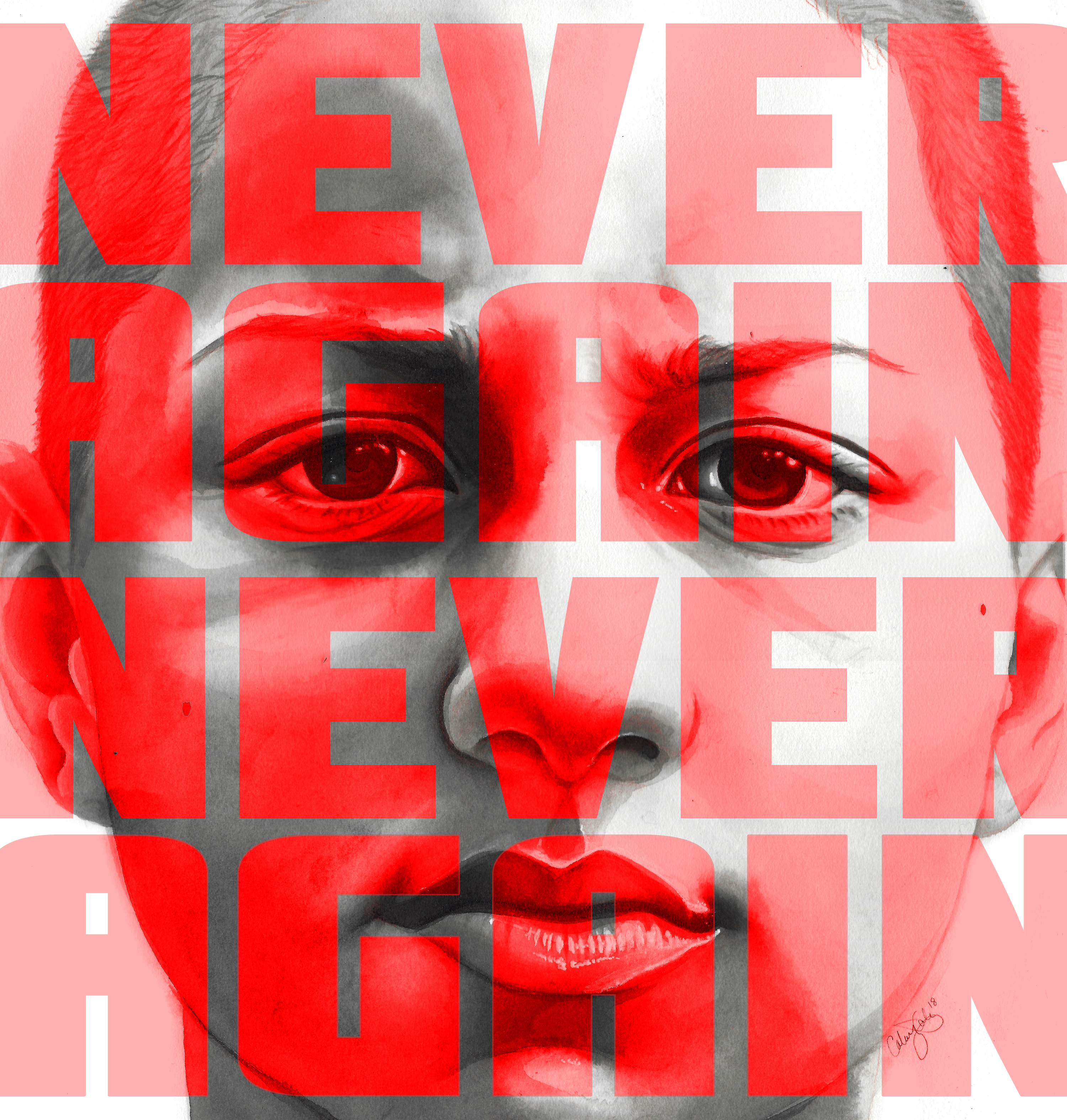 Another treatment of digital wording over original drawing. Emma appears free but barricaded by the words. 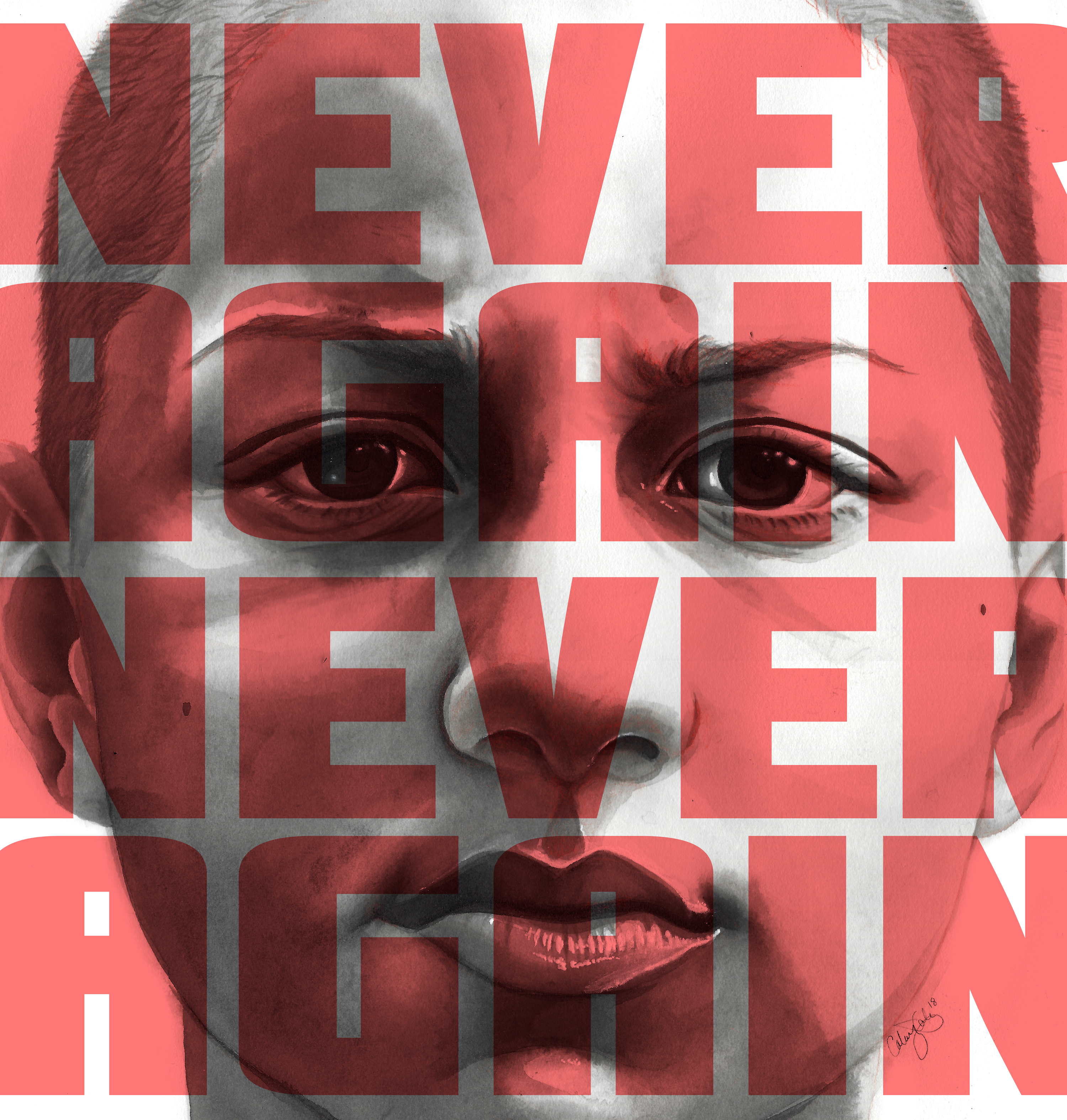 Emma, perhaps fearful and hiding behind the words. 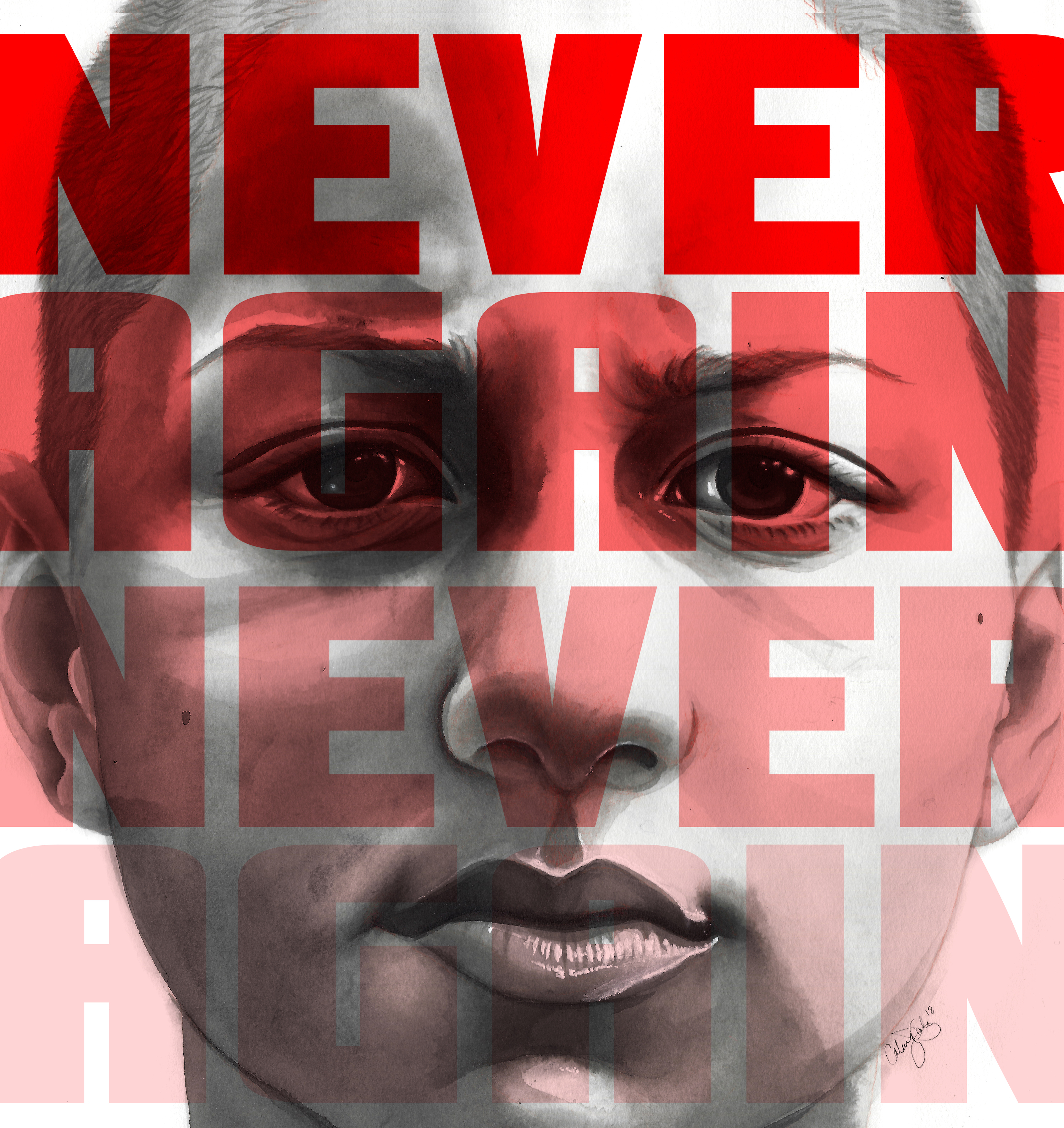 Our final cover choice. Emma breaks through and is able to speak the words.

When our cover artist, Nicole Martinez, was born, her grandmother said, “she came out drawing.”

Under her pen name, Calamity Cole, she had submitted political cartoons, some of which we published in the fledgling Messenger Mountain News in 2017. When 2018 rolled in, we asked if she would like to design a cover for us.

Now, five issues into the year, we have five extraordinary covers that start with a prompt, i.e., some words from us that describe a theme or event or, as with this cover, a news incident that shattered us all—another mass killing that garnered yet another national outcry that struck deep into America’s heart.

The first step in the process was the raw sketch of student Emma Gonzalez, vocal in her outrage after the shooting at Marjory Stoneman Douglas High School in Parkland, FL. We knew Nicole had struck the right tone that would amplify the young voices speaking truth to power. In the end, she presented us with seven variations.

Nicole’s e-mails describe the thought and emotions she experienced well before touching pen to paper and brought to light the evolution of the process demonstrated in her own words, here, and, below, the visual evolution from the first sketch to the final cover. Bonnie Morgan added her interpretation of each proposal, ending with our choice for the cover.

IN HER OWN WORDS

Here are my sketch proposals on gun violence. I chose to focus on the recent Florida school shootings and school shootings in general as I think they have had the most impact on myself and others. I was saddened by your intern Izzy’s piece on how she and her fellow students are dealing with, and are impacted by, these recent events. That’s a sobering fact that kids have to live with nowadays. Stark tragedy is what I want to come across in these pieces and how quiet moments in the light of day might illustrate that. I just signed up my son, Fox, for preschool and the reality of this fear is where my mindset is right now; on the political possibly becoming personal. I would really like to emphasize that children have been murdered as I feel this fact gets lost too easily in this particular debate. I think your suggestion, Flavia, was great to have all these pieces in black and white and I would like to add red where appropriate. It would set the tone well I think.

I was inspired and had many ideas come to mind on the subject matter so forgive the barrage of imagery. Also, forgive the sad nature; I was having trouble finding the optimism in all this. Although, I ended with a strong one as to not be too gloomy!

Very closeup portrait of Emma Gonzalez, a Florida student protester (the one with the shaved head). She inspires me a lot and I think the simplicity of a close-up portrait of her could be very powerful. The fierceness of her stare speaks loudly to guns rights advocates; that a victim is fighting back! This symbolizes the power students possess to change the world. Black and white. Maybe the words “Never Again” in red added digitally. This was a rough sketch but the final version would resemble her likeness much more.

SUPERCHUNK What a Time to Be Alive