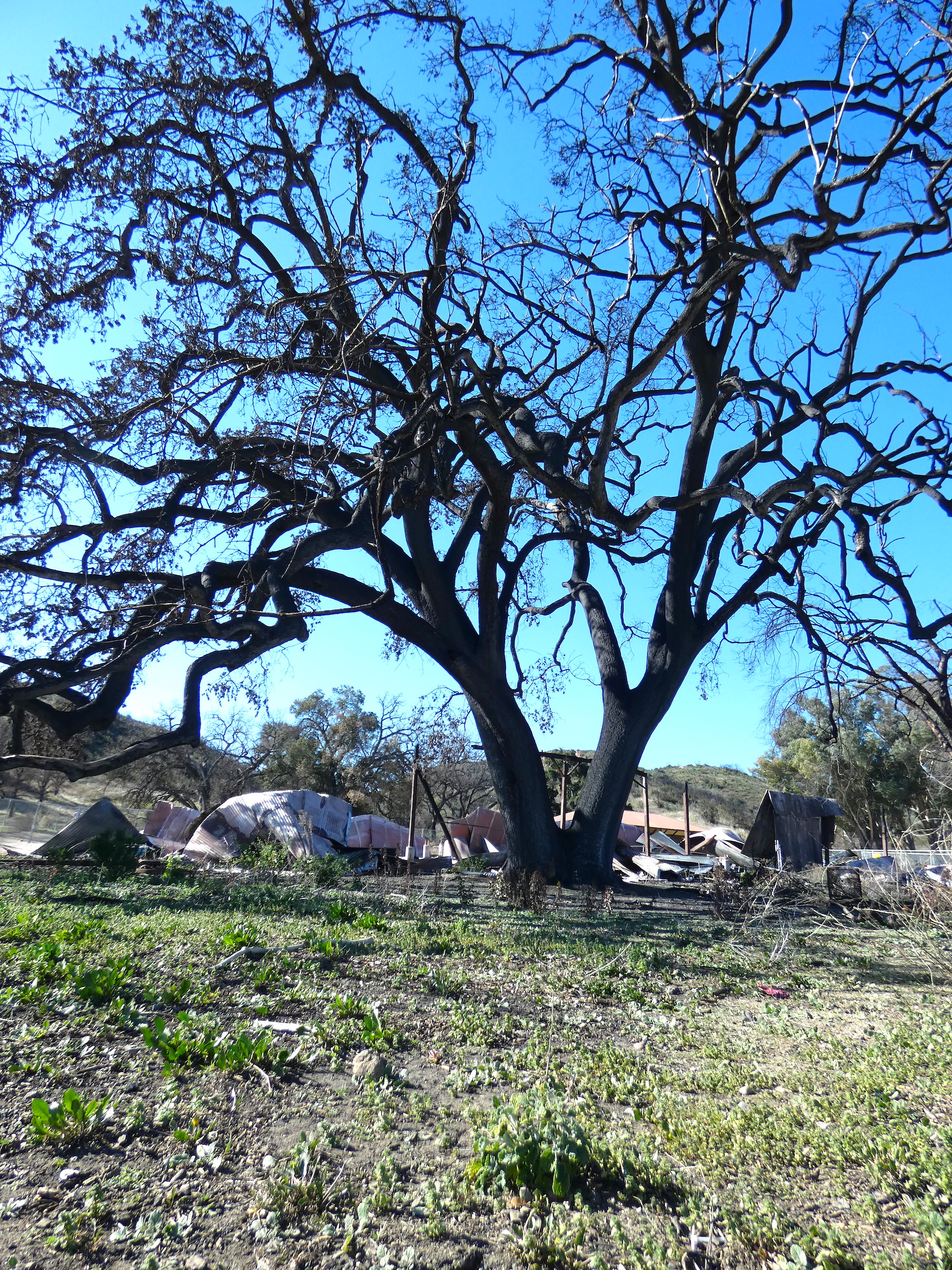 The Paramount Ranch “Witness Tree,” a valley oak that has stood on the ranch for at least 100 years, failed to recover from the Woolsey Fire and is scheduled to be cut down later this month. Photos by Suzanne Guldimann 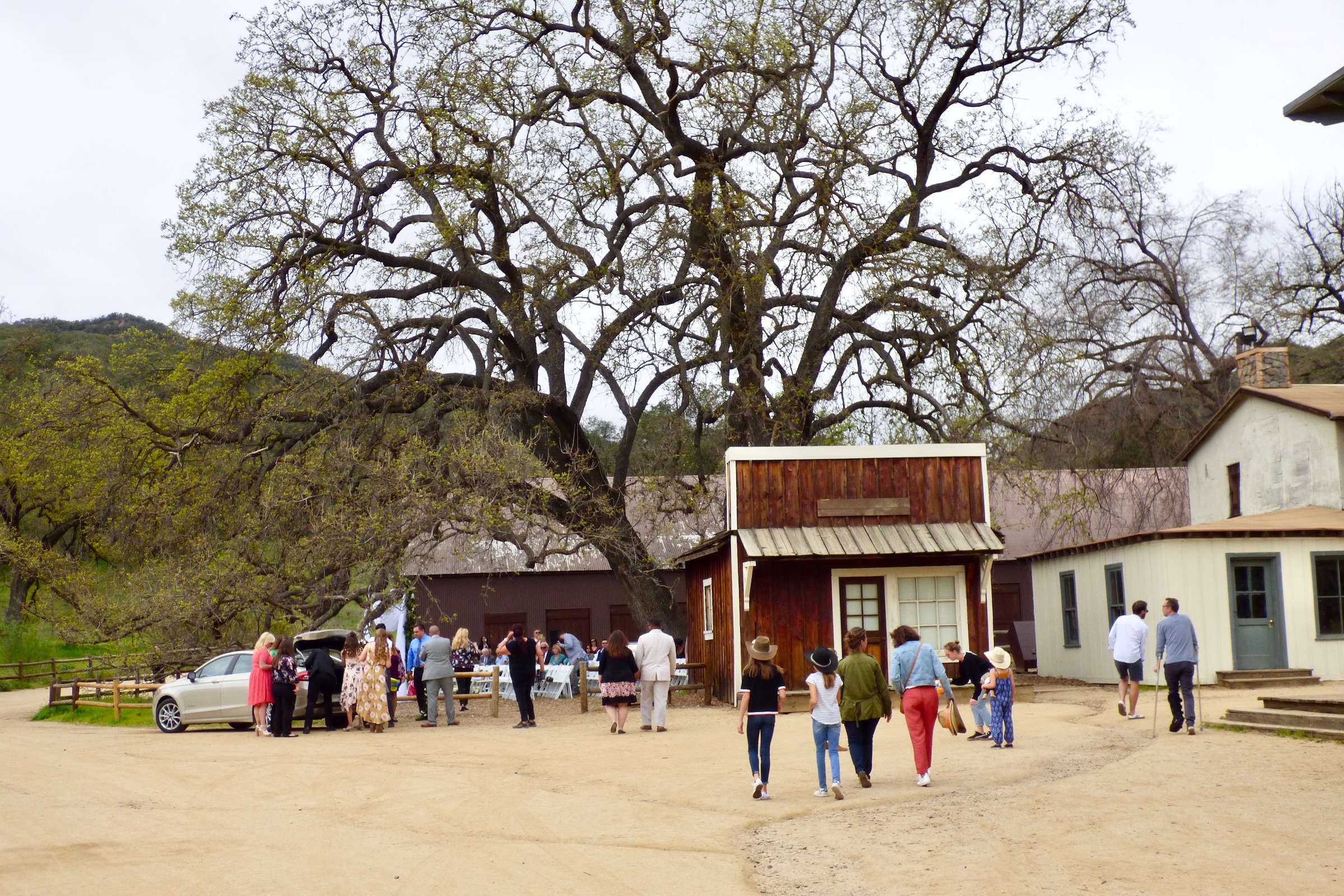 This “Witness Tree” was one of thousands of native oaks burned in the Woolsey Fire. The “Witness Tree” on a typical preWoolsey-Fire afternoon, with a wedding underway and a wide range of visitors exploring the Western town set. 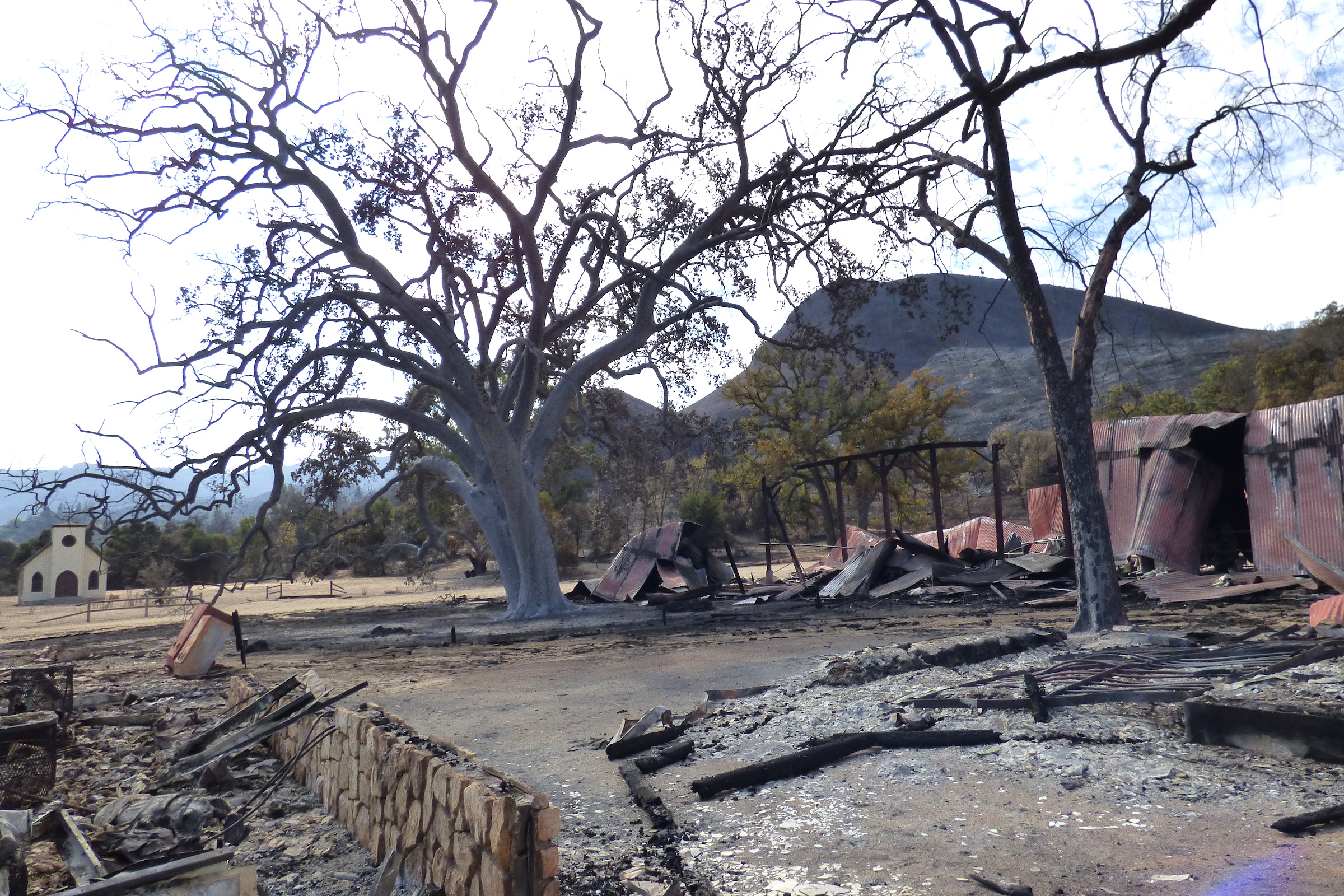 The oak, located in the heart of the Western town set, may have been “cooked” by the heat of the nearby buildings burning. This was the scene less than a month after the fire. The tree appeared scorched but intact. However, the tree never recovered. 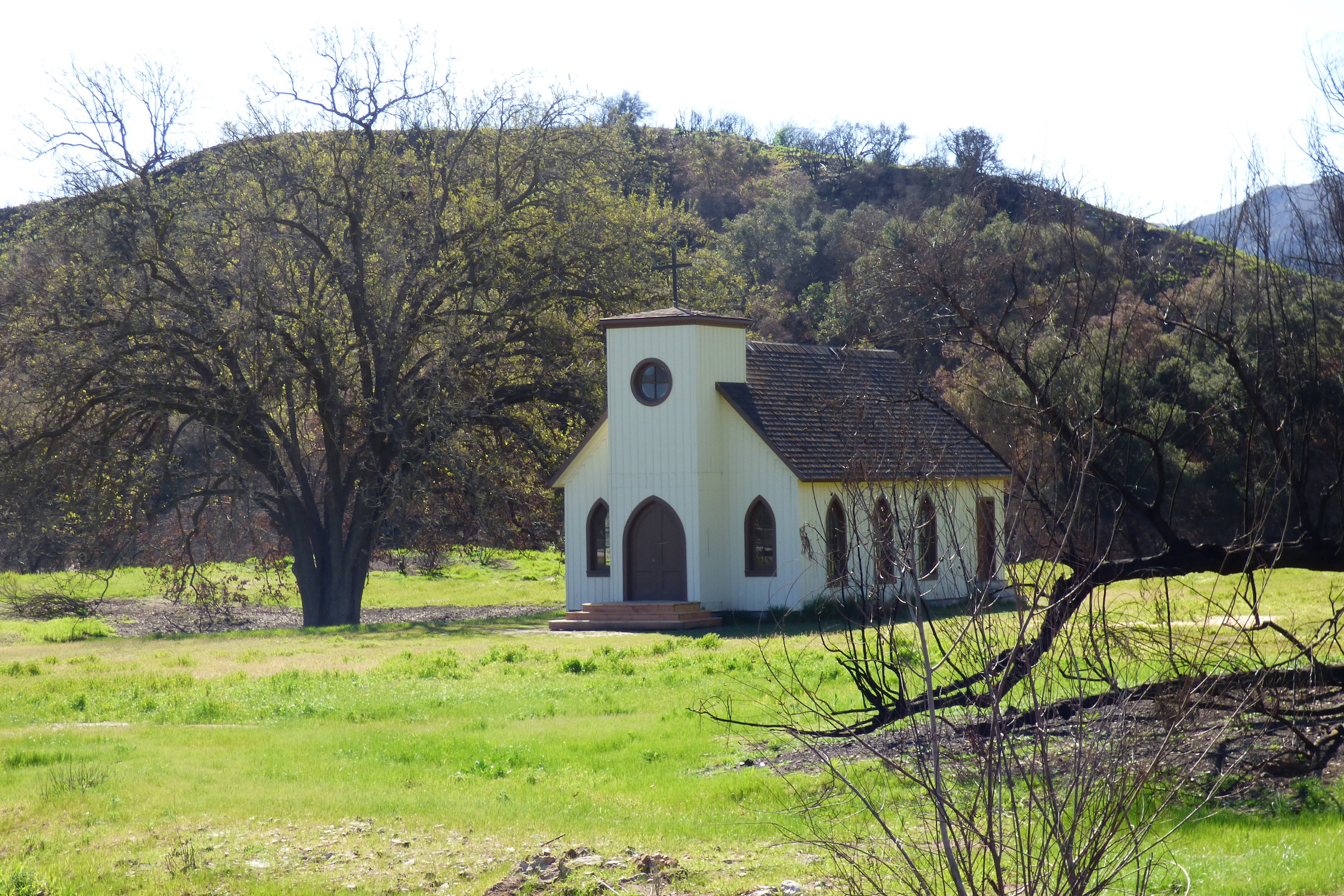 This valley oak, thought to be somewhat younger than the Witness Tree, is located outside the Western town set and escaped the fire. It continues to thrive. 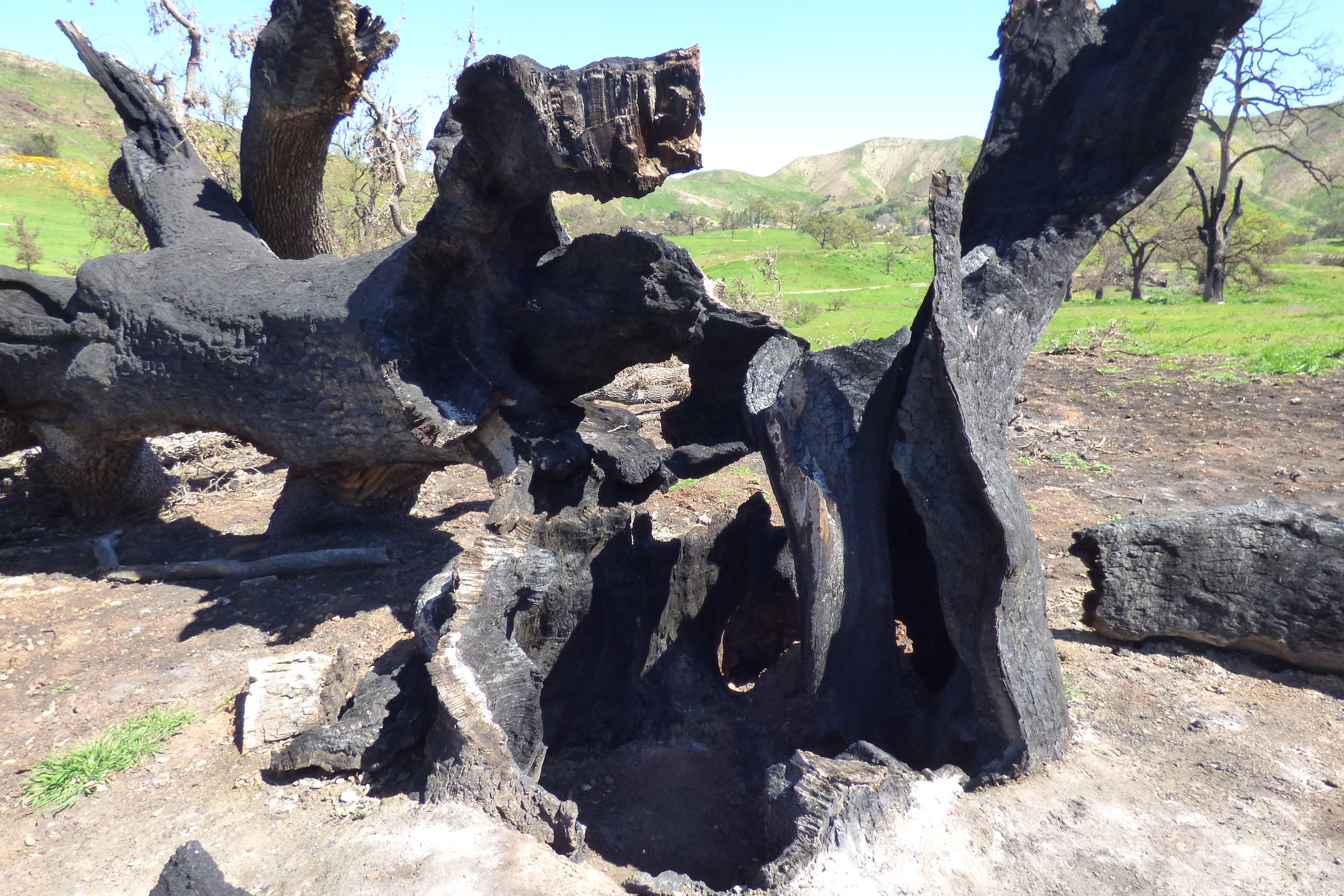 This valley oak also at Paramount Ranch was completely consumed by the Woolsey Fire. All that is left is a hollowed-out stump. 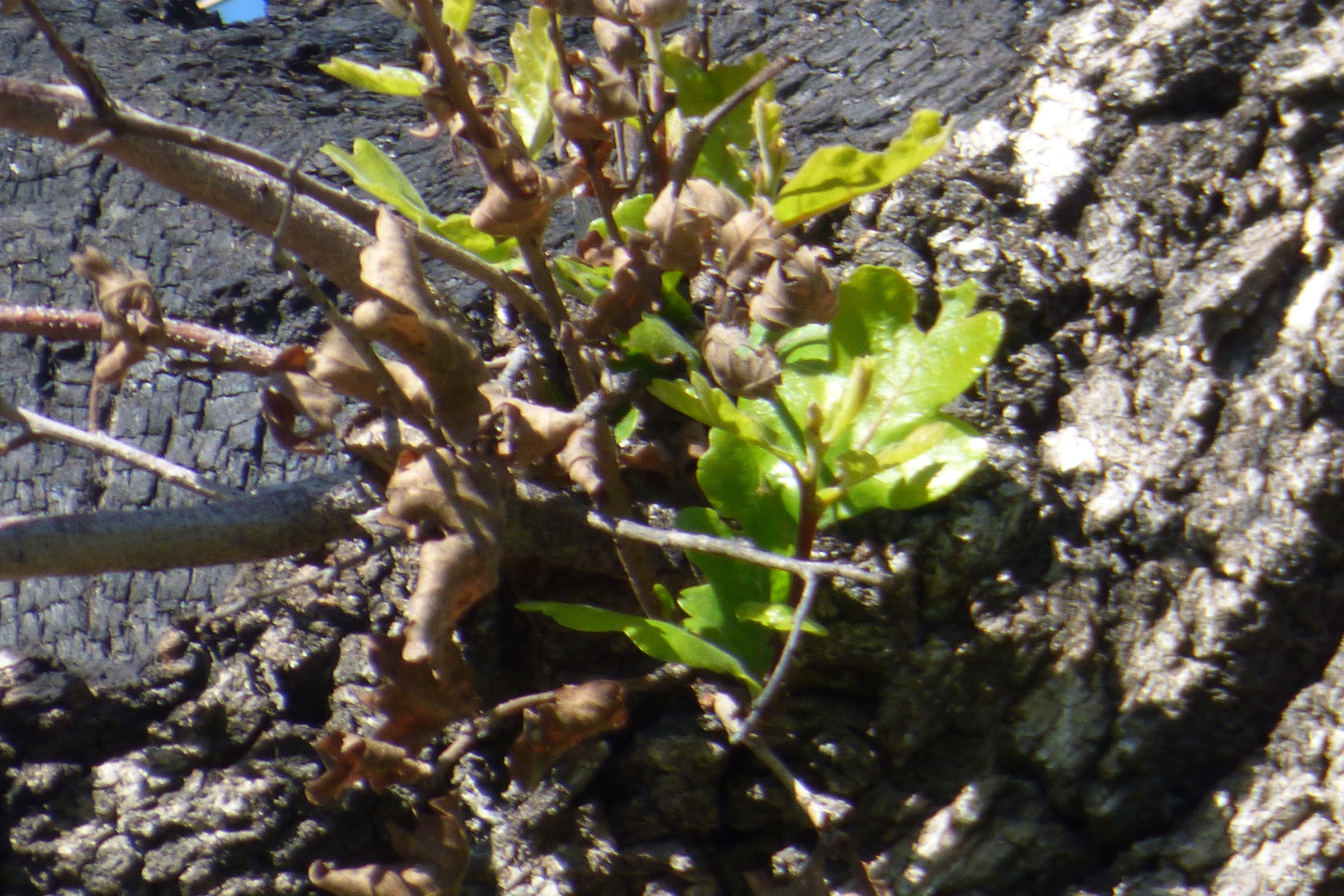 The Paramount Ranch Witness Tree attempted to leaf out last spring, but the damage to the tree was too extensive and the tree couldn’t survive. 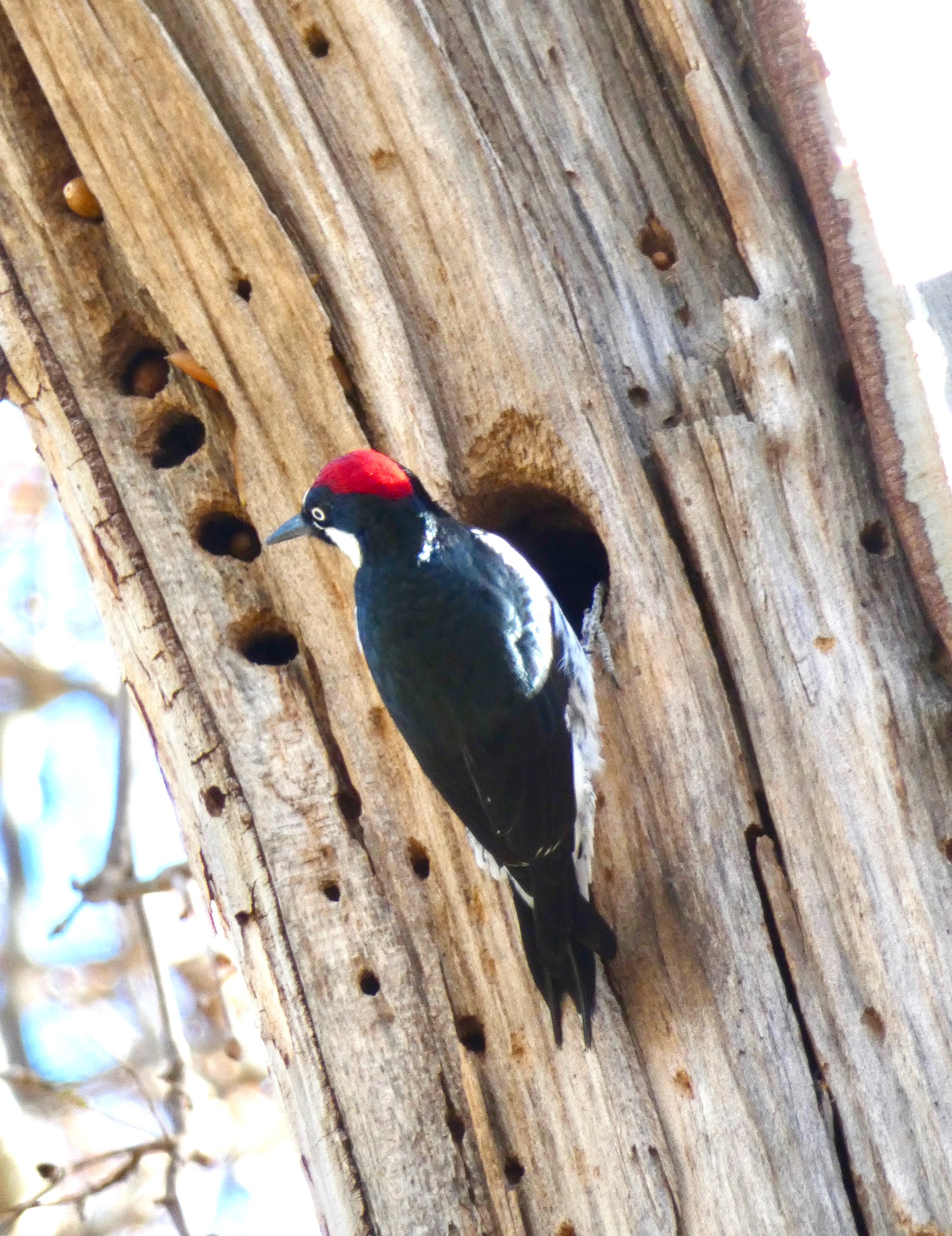 Valley oaks provide key habitat for numerous native bird, mammal and insect species. Acorn woodpeckers depend on valley oaks for almost every aspect of their lives. This bird has made a nest hole in the same tree that contains its stash of acorns, each stored in a separate storage hole that may be used by generations of birds. 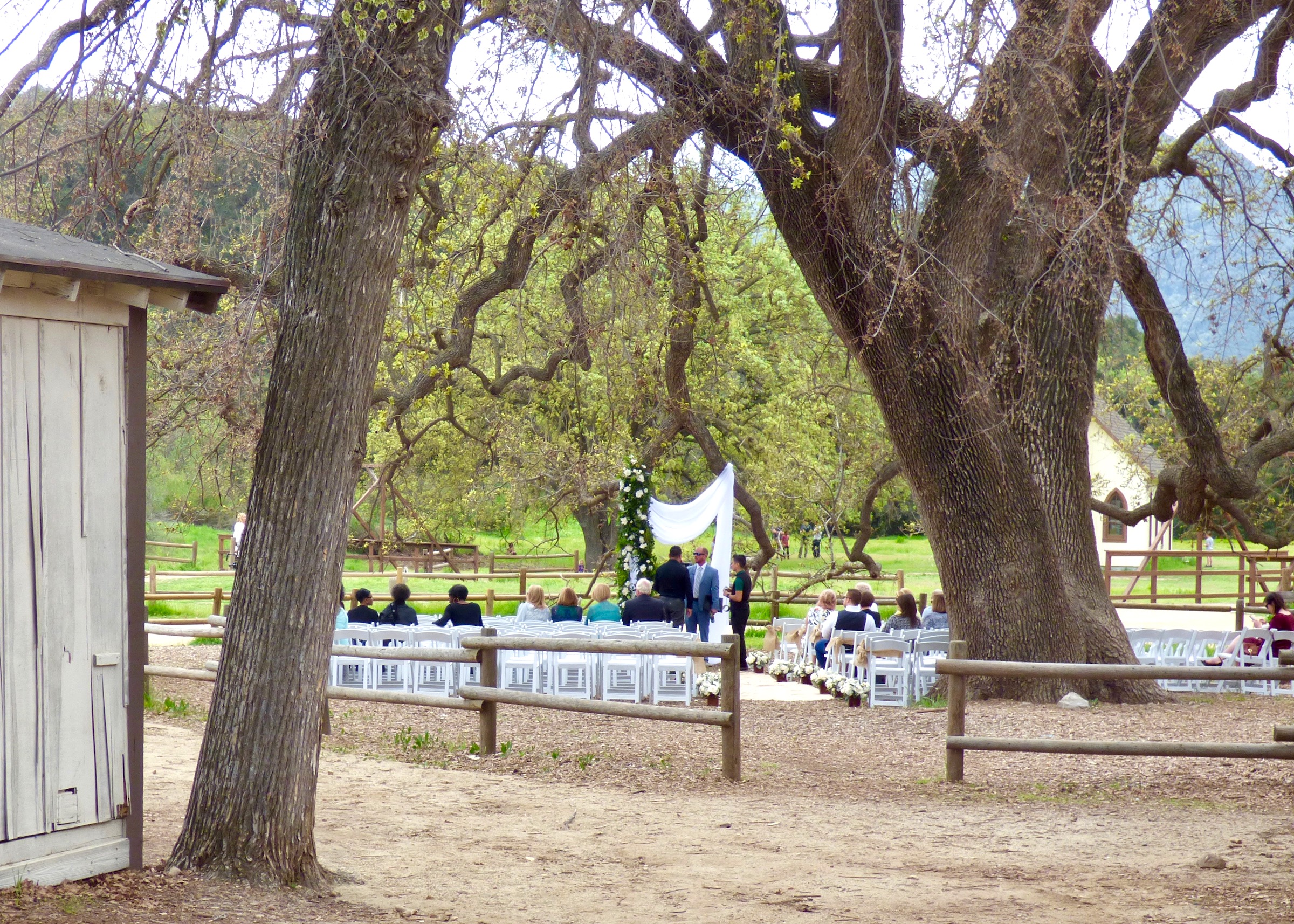 One of many Paramount Ranch weddings that took place under the canopy of the big oak. The Witness Tree will live on in the memory of all who shared moments like this. The Santa Monica Mountains Fund is working to raise funds to rebuild the Western Town and will be planting more trees as part of the restoration process. In time a new Witness Tree may grow in this same location.

The Woolsey Fire has claimed another victim: a massive valley oak that stood for more than a century in Paramount Ranch.

When this tree was a seedling, the land it grew on was part of a working ranch—the real wild west. During the 20th century, the film version of the wild west was built around the tree and it became part of the landscape of American cinema, appearing in hundreds of films,TV shows and commercials.

When Paramount Ranch became a National Park Service (NPS) property and part of the Santa Monica Mountains National Recreation Area (SMMNRA), the shade beneath the oak’s spreading canopy became a popular location for weddings, parties, and performances at events like the annual Topanga Fiddle Festival. Its prominent place in so many people’s memories earned the oak the name “Witness Tree.”

The Western town set and its storied tree burned in the 2018 Woolsey Fire. Valley oaks are fairly fire resistant, and many of the oaks at Paramount ranch survived the fire, but this one was surrounded by buildings that burned with sustained high heat.

NPS ecologists initially hoped the oak would recover; new growth appeared on several branches last spring, but the damage was too great.

The NPS and the Santa Monica Mountains Fund, the SMMNRA’s non-profit partner, held a farewell party for the tree on February 9. Mike Malone, retired NPS park ranger and Paramount Ranch historian, and Don Bitz, a volunteer and local historian, shared the ranch’s history at the event, including the earliest photo they could find of the tree: a cameo appearance of one of the two trunks in a publicity still for the 1934 western, Home on the Range, starring former child star, Jackie Coogan.

John Tiszler, Supervisory Plant Biologist for SMMNRA, shared information on the life cycle of this California native species and answered questions about this specific tree.

Tiszler explained that trees can’t heal, but they can sometimes overcome damage by putting out new growth. That wasn’t enough to save this tree. “My personal feeling is that the cambium layer [the part of the tree just beneath the bark that draws water and nutrients up from the soil and enables growth] was baked by the fire.”

He said he suspects the close proximity of the tree to several buildings contributed to its demise, potentially raising the temperature of the fire and keeping the heat on after the wildfire swept through. He theorizes that the growth that appeared in the spring may have been fueled by moisture already in the upper part of the tree, a resource that could not be renewed.

The tree’s exact age? Tiszler stated that while this particular tree is at least a hundred years old, determining the exact age is difficult. The Paramount Ranch oak is massive. Each of its two trunks has a diameter of 100 inches but the girth of a tree doesn’t necessarily indicate its age. It appears to be fully mature in the 1934 photo.

“They can grow fast,” Tiszler told the Messenger Mountain News. You may think a big tree is old, but one that grows in an open area without competition for sunlight and with lots of water may be younger than it looks.

The NPS plans to count the tree’s growth rings when the tree is cut down, but Tiszler explained that many large valley oaks rot and become hollow inside as they grow, making it difficult or even impossible to date.

The Witness Tree is just one of many valley oaks at Paramount Ranch Park. This oak is significant not only because it was a local heritage tree, but because it highlights the plight of a species that is increasingly impacted by development, habitat loss and climate change.

The Valley oak, Quercus lobata, is the largest North American oak and  the only native deciduous oak in the Santa Monica Mountains. These giants can grow to be more than 100 feet tall, and can potentially live for several hundred years.

The valley oak is endemic to California, growing throughout the Central Valley, in the valleys of the Sierra Nevada, and the Coast Ranges, including the San Fernando Valley side of the Santa Monica Mountains.

This isn’t a tree that thrives near the ocean, but it is an important part of the local ecosystem on the inland side of the range, providing critical habitat for a wide range of insects, birds, and mammals, from mule deer that browse on its young leaves, to the increasingly rare ringtail cat, a mammal in the raccoon family that dens in hollow oaks.

The acorn woodpecker depends on valley oaks for its entire life cycle: excavating nesting holes in dead trees to raise its young, eating the acorns and storing uneaten acorn reserves in hundreds of carefully drilled holes in the trunks of certain oaks.

Many valley oaks were cut down for firewood or burned to make charcoal during the Mexican rancho era. In the 18th century, charcoal from valley oaks would have fueled the kilns at the Chatworth Caledra lime kilns, at the northern end of Topanga Canyon Blvd.

The wood tends to crack, but a U.S. forestry report on the species reveals that the wood has been used for cabinetry, wine barrels, and as keel blocks to support ships in dry dock during World War II, when other sources of lumber were limited.

Special protections have been put in place to preserve existing trees, but numerous studies, including reports funded by the U.S. Forestry Service, indicate that the local population in the Santa Monica Mountains continues to decline, and that the trees are “reproducing poorly.”

The Paramount Ranch Witness Tree will be cut down later this month. The plan is to repurpose any usable wood from the tree for elements like hitching posts and benches when the Western town set is rebuilt.

The Witness Tree was just one of many valley oaks at Paramount Ranch. A younger but still massive valley oak stands near the dead tree, unburned and apparently thriving; farther away, a hollow stump is all that is left of a much larger valley oak that appears to have burned from the inside out, almost entirely consumed by the fire.

In October, a record number of volunteers gathered at Paramount Ranch to plant oak tree seedlings. Whether these new trees will live to become witness trees in time remains to be seen, but they offer hope for the future.

The Santa Monica Mountains Fund is working to raise funds to rebuild the Western Town and will be planting more trees as part of the restoration process. For information: contact@samofund.org; (805) 370-2341. Located at 401 West Hillcrest Drive, Thousand Oaks, CA 91360.