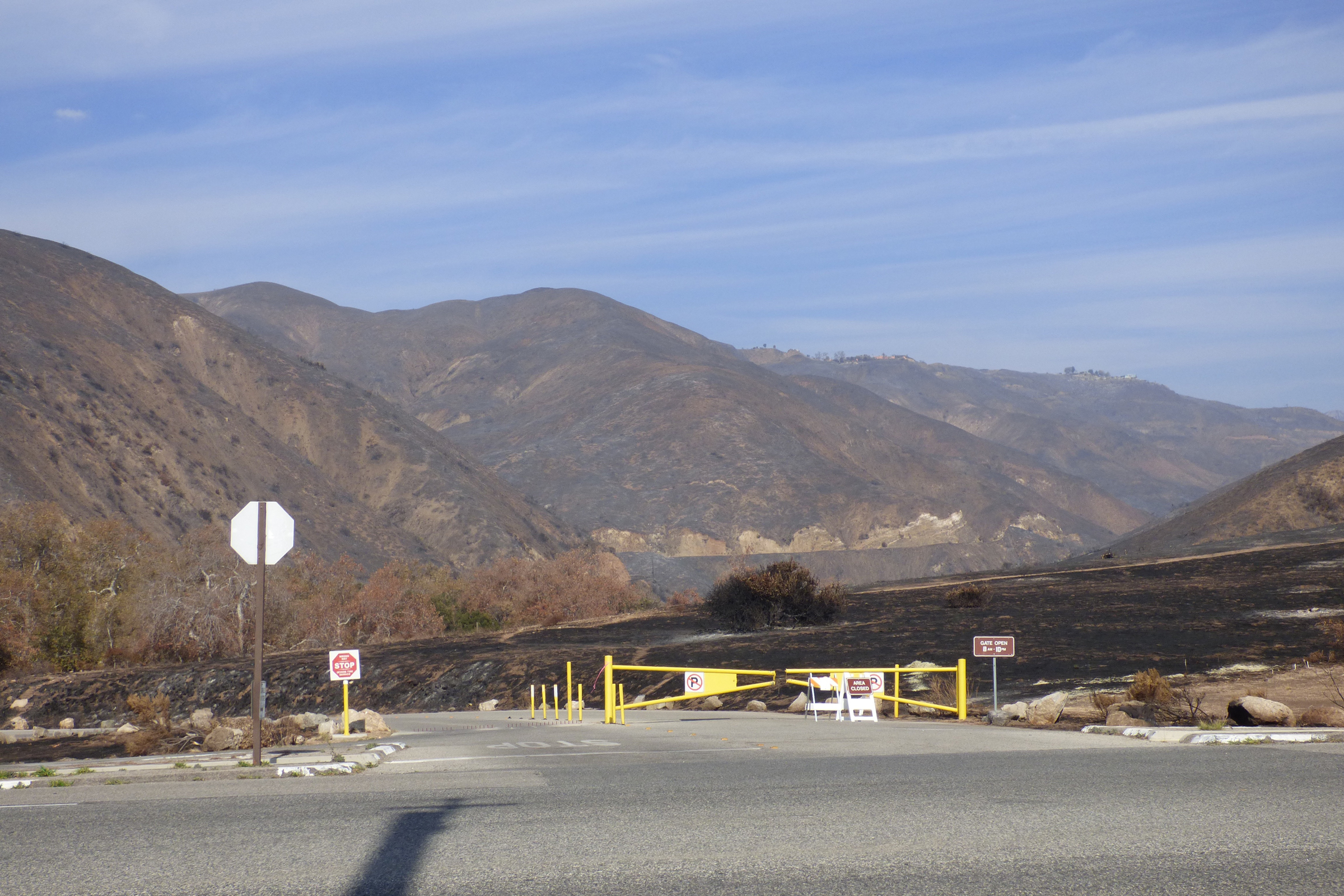 Leo Carrillo State Park remains closed due to extensive damage. Losses at the park include the homes of several key State Parks personnel, as well as the visitor center and camp store, and even several lifeguard towers. Photos by Suzanne Guldimann 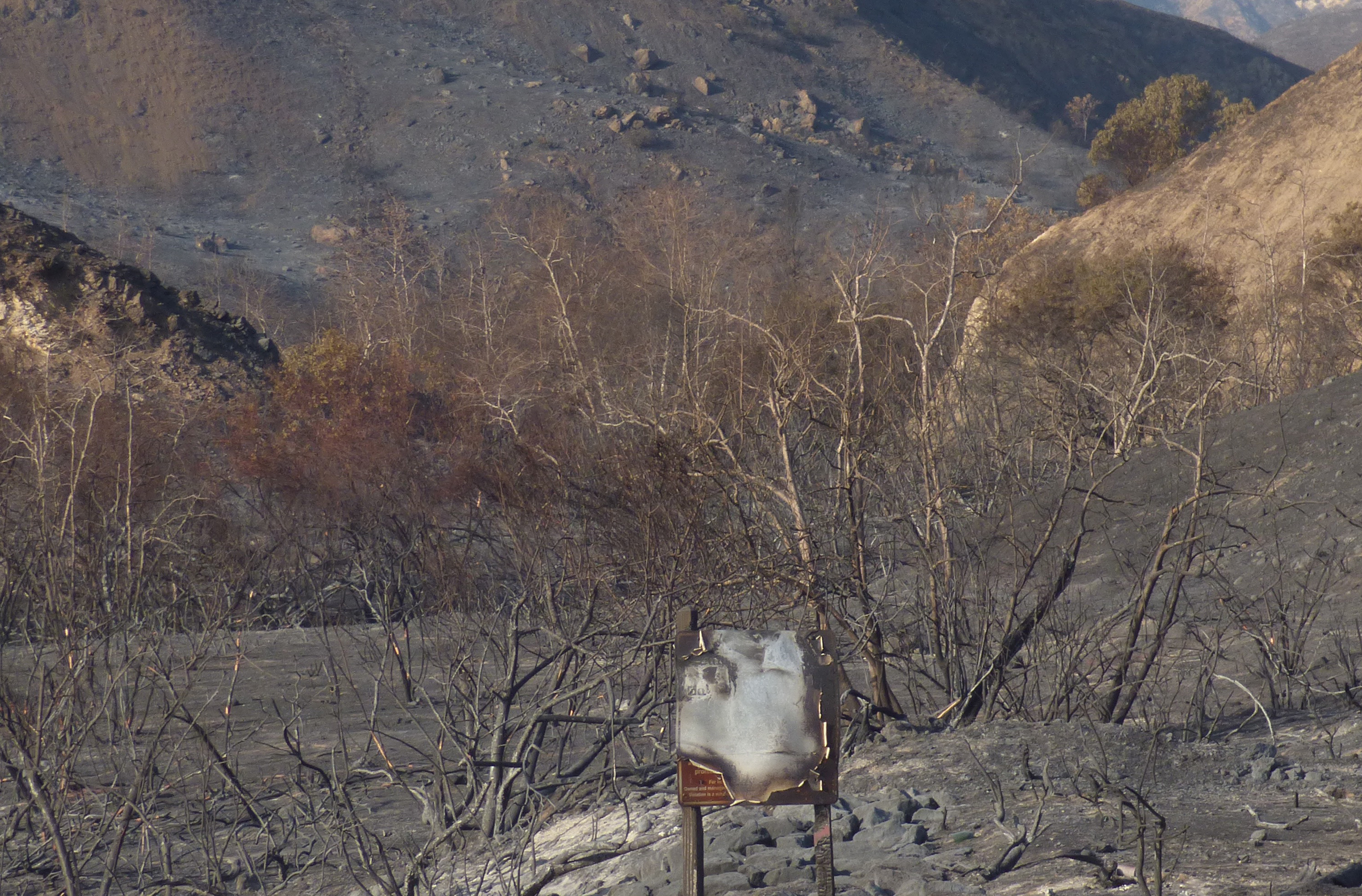 This MRCA sign for the Sara Wan Trailhead at Corral Canyon Park is still standing, but the park was severely impacted by the fire. 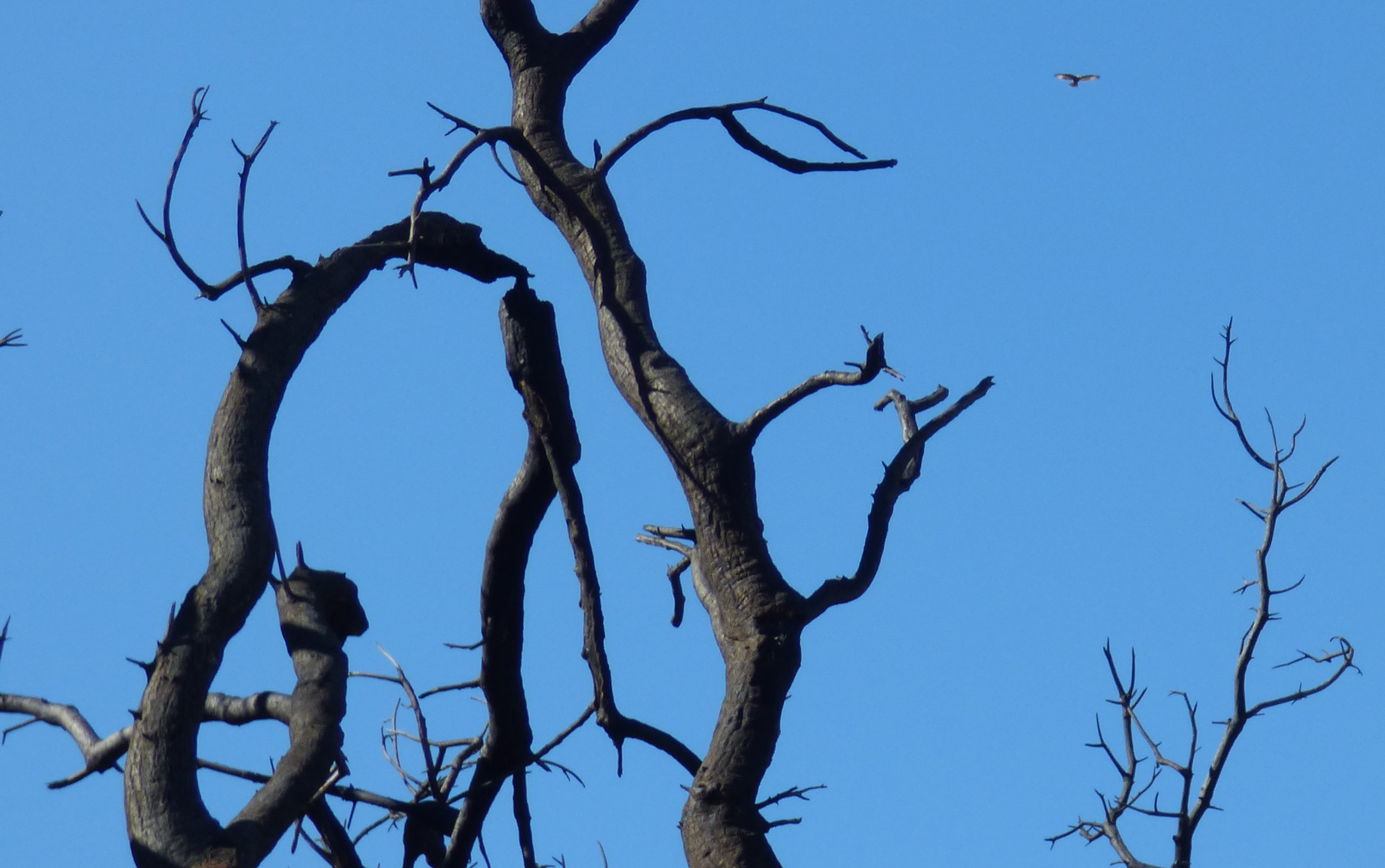 It may not look big in the photo, but that oak branch, hanging by a fragment of burned bark, is heavy enough to kill or severely injure if it falls on a hiker. Fire-related hazards like this, as well as fallen trees, power poles, and rock slides, are one of the main reasons so many parks in the Woosley Fire burn area remain closed.

Nearly half of the Santa Monica Mountains National Recreation Area was burned during the Woolsey Fire, and many parks in the patchwork of open space remained closed due to extensive damage.

That damage is severe and potentially hazardous. Trees have fallen across trails, or are at risk of falling and crushing hikerss; bridges and stairs have burned; large sections of trail have become unstable and are at risk from rock and mudslides. Infrastructure like parking areas, signage, and restrooms have burned, and there are some unusual hazards like stump holes hidden under the ash that pose a serious safety risk. Until all of the damage has been assessed, and safety concerns addressed, these areas will remain closed.

The National Park Service’s popular Solstice Canyon Park and Trancas and Zuma Canyons are expected to remain closed for some time. All three canyons were extremely hard hit by the fire. Rocky Oaks was also severely impacted.

Many sections of the Backbone Trail were also severely damaged by the fire, and will remain closed for the near future.

There are still NPS parkland in the area that are open. The Western Town film set at Paramount Ranch was destroyed in the fire, but other areas of that are open. Cheeseboro and Palo Comado Canyon parks have also reopened.

Rancho Sierra Vista/Satwiwa was not damaged by the Woolsey Fire, and the Santa Monica Mountains Visitor Center at King Gillette, which narrowly escaped the fire and was closed for several days following the disaster, is open again.

Several key California State Parks remain closed. On December 4, State Parks announced that County Line Beach and staircase have been reopened on the ocean side of Pacific Coast Highway. However, the Leo Carrillo State Park campground, back-country trails and roads, and the day-use area remain closed until further notice due to the damages caused by the fire that burned through the campground, destroying several structures, The visitor center and camp store, sector office, employee residences, three lifeguard towers, the Junior Lifeguard Complex, and several restrooms were destroyed.

Point Dume State Beach and nature preserve also remain closed. Problems at the park include the risk of burnt debris falling from the bluffs above the park, where several houses burned.

Topanga and Will Rogers State Parks remain open. Many Topanga residents are reporting unusually high numbers of visitors, probably due to the the closures in other major parks in the area. Arriving early and opting for a weekday walk can help regular park-goers avoid the crowds.

Temescal Gateway Park, Summit Valley, and Tuna Canyon Park were not impacted and remain open. They may offer a less crowded option for local walkers and hikers than Topanga State Park while fire-related park closures remain in effect.

The Fire Next Time: Much Work is to Be Done to Ensure Our Future Safety

The Woolsey Wildfire—Paying for the Cleanup