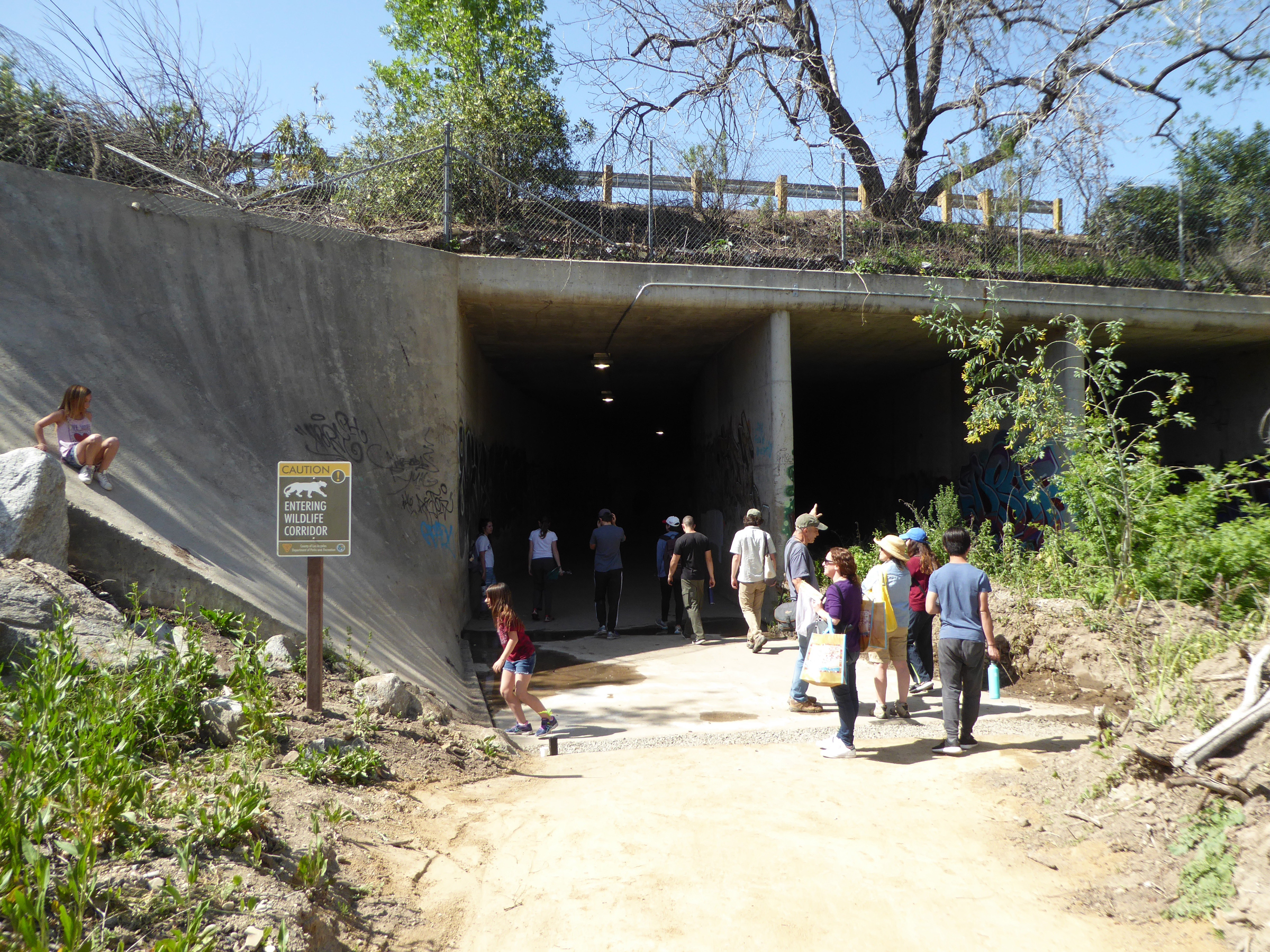 The Don Wallace Connector Trail is unlike any other major trail in Los Angeles County because it includes a 400-foot-long journey through a box culvert under the 101 Freeway, connecting trails on both sides of the freeway. A sign reminds visitors that they may be sharing the underpass with wildlife. Photo by Suzanne Guldimann 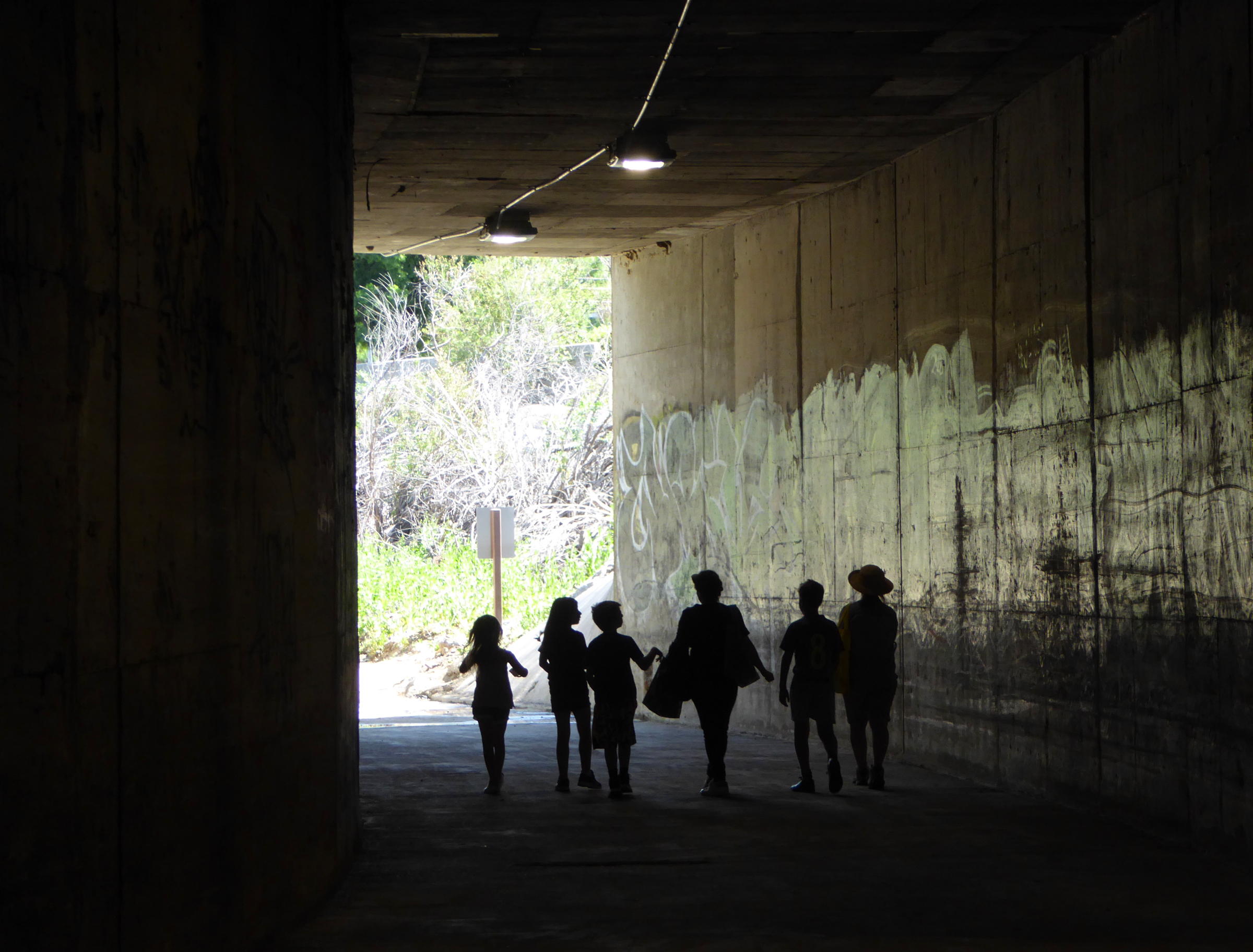 This group of young explorers and their parents enjoyed playing with the echos in the curved tunnel before emerging back into the sunlight. Photo by Suzanne Guldimann 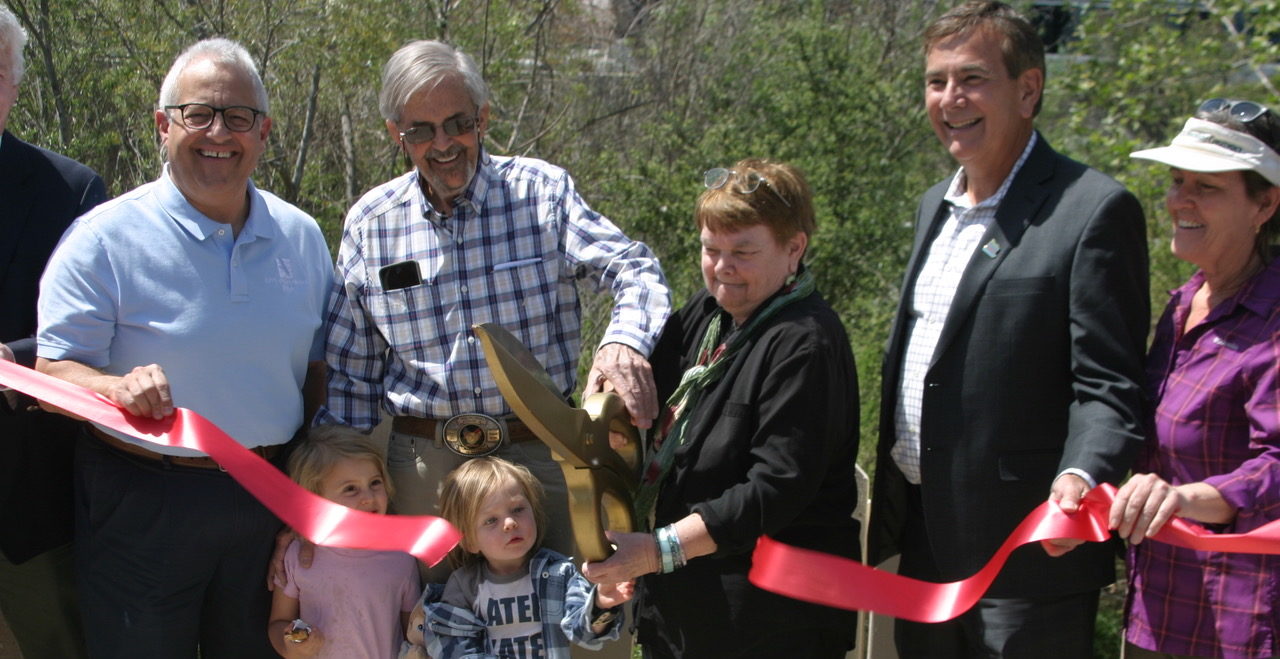 After 42 years of advocating for the preservation of the Santa Monica Mountains, outdoor enthusiast Don Wallace had his moment of victory with a trail connector named in his honor.

The VIP dedication of the Don Wallace Multi-Use Trail Connector took place on Friday, April 13 behind the Starbucks at 26531 Agoura Road in Calabasas.

A former Los Angeles City Firefighter, Wallace, 77, was beside himself with joy to help cut the ribbon on the 1,700 feet of the connector that becomes a gateway to trails stretching from Canada to Mexico.

Ultimately, according to its advocates, this historic trail will have a tremendous impact on the recreational choices available to the growing number of people across the region who seek to enjoy hiking, horseback riding and biking.

Highlighted by beautiful white fencing, benches and a restful gazebo, the Trail Connector marks a momentous step forward in preserving the greater Santa Monica Mountains and creating ever more opportunities for people to easily access and enjoy the great outdoors.

According to Wallace, the Trail Connector will enable safe passage under the highway and provide connectivity to the Calabasas Cold Creek, and Los Virgenes Creek trails, as well as the Malibu Creek State Park trail system.

In an historic move for all the agencies involved, including Caltrans, the trail connector provides access underneath Agoura Road to the South and the 101 Freeway to the north and will be maintained by the Los Angeles County Department of Parks and Recreation.

The project was completed in cooperation with the Department of Public Works, Caltrans, the California Department of Fish and Wildlife, the Army Corps of Engineers and the City of Calabasas.

“From this trailhead, you can walk all the way to the crossing at Lost Hills to the Las Virgenes trail to the beach and then on to Mexico,” Wallace said. “Or north to Canada on the Pacific Crest Trail in Simi Valley; it opens up possibilities that are uncounted and untold.”

“As many know, Don Wallace advocated for a safe passage trail that was considered impossible to achieve. Did Don listen? No. Does he listen to anyone else? No. So, we broke ground in 2014,” Kuehl said. “This is an historic moment; it is a vital land connection trail with coastal areas. Before this, there was no viable way to get across the 101 Freeway. People really don’t understand the impact that one person can make but Don had the vision, tenacity and leadership; this will be his legacy.”

Fred Gaines, the current Mayor of the City of Calabasas, while politically opposed to Wallace on many issues regarding development in the Santa Monica Mountains, could agree on the value of a trail connector starting in Calabasas.

“He showed me his vision,” Gaines said. “Don has put fifty years into public service and helped us create something that will be enjoyed by the people through the County for decades to come.”

Joe Edmiston, who, as the Executive Director of the Mountain Resource Conservation Authority, helped manage the bond money on behalf of the trail project, said, “Let’s hope this dedication does not make you soft and squishy; we need you out there speaking truth to power and to other truth seekers.”

Finally, the man of the hour, Don Wallace, addressed the group, giving former L.A. County Third District Supervisor Zev Yaroslavsky much credit for advocating for the trail connector project and approving the left-over bond money for the project.

Wallace also gave much-deserved credit to Maria Chong-Castillo, who worked with Yaroslavsky to allocate the bond money for the trailhead.

“I wanted to honor Marie Chong-Castillo, who has done the most work of anyone here today,” he said. “One of the smartest things Supervisor Kuhl did was making Maria her

Deputy for Public Works. Chong-Castillo oversees the county services in the Third District through the Departments of Beaches and Harbors, Parks and Recreation, Public Library, Public Works and Animal Care and Control.

He also served as a deputy for then-Supervisor Edmund D. Edelman in the early 1990s and ran for supervisor himself in 1988 and 1994.

Wallace outlined the many years and agencies that had to give approval for the trail project and called out the efforts of State Parks Angeles District under the leadership of Craig Sapp, Equestrian Trails Council Corral 36 and the Las Virgenes Homeowners Federation (LVHF) under former president Jess Thomas and current president Kim Lamorie.

“This personifies what we are all about,” said Lamorie. “Don Wallace has been a fighter. He helped do this with Zev Yaroslavsky and Sheila Kuehl’s office. We must give Yaroslavsky major credit; he directed his staff to put together bond money for the trails. Sheila Kuehl wisely kept Marie Chong Castillo on her staff who helped pull the project together and today is the day it all comes together; I am so thrilled!”

The Don Wallace Multi-Use Trail Connector is located behind the Starbucks at 26531 Agoura Road, Calabasas, CA 91392.