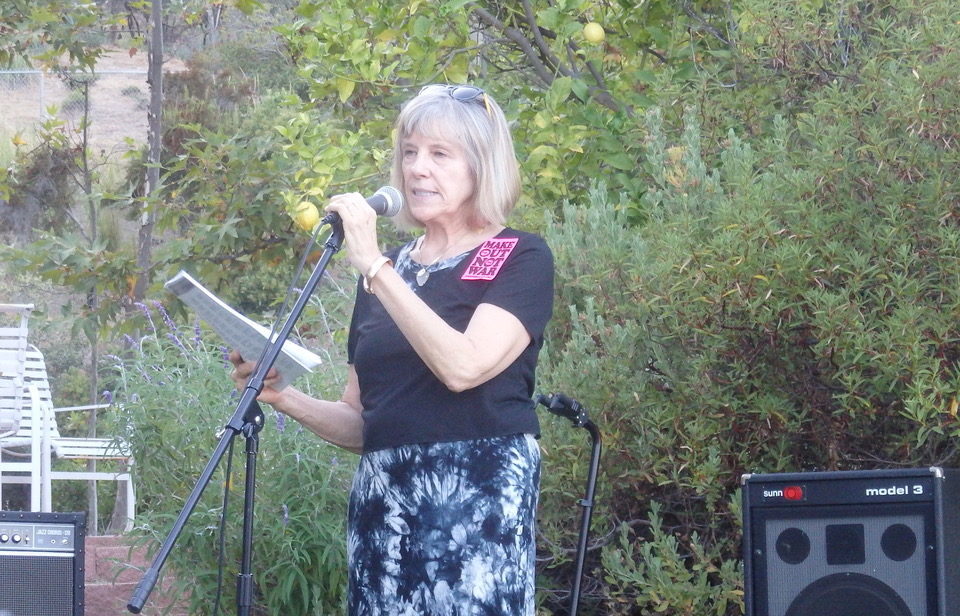 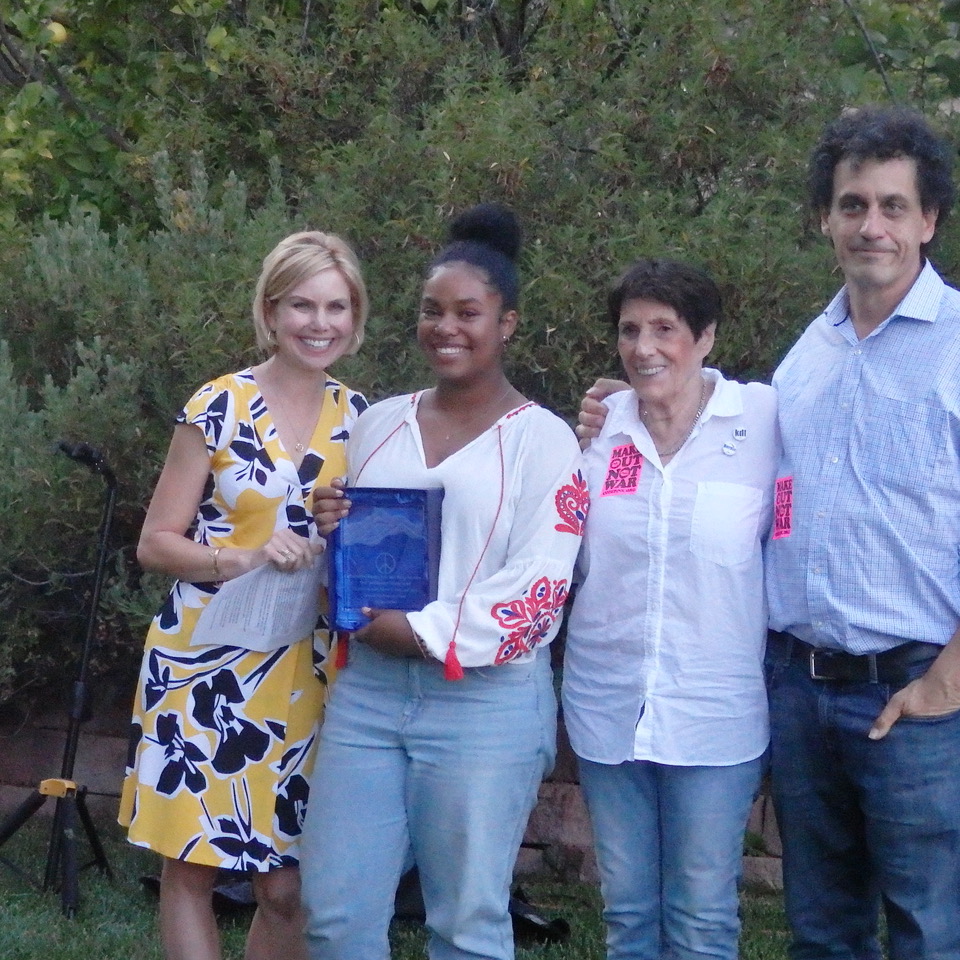 Erika Feresten, President of the Pacific Palisades Democratic Club, with Thandiwe Abdullah, Dorothy Reik and Alan Minsky accept the Outside the Party Award for Peace & Justice on behalf of Patrisse Cullors of Black Lives Matter. 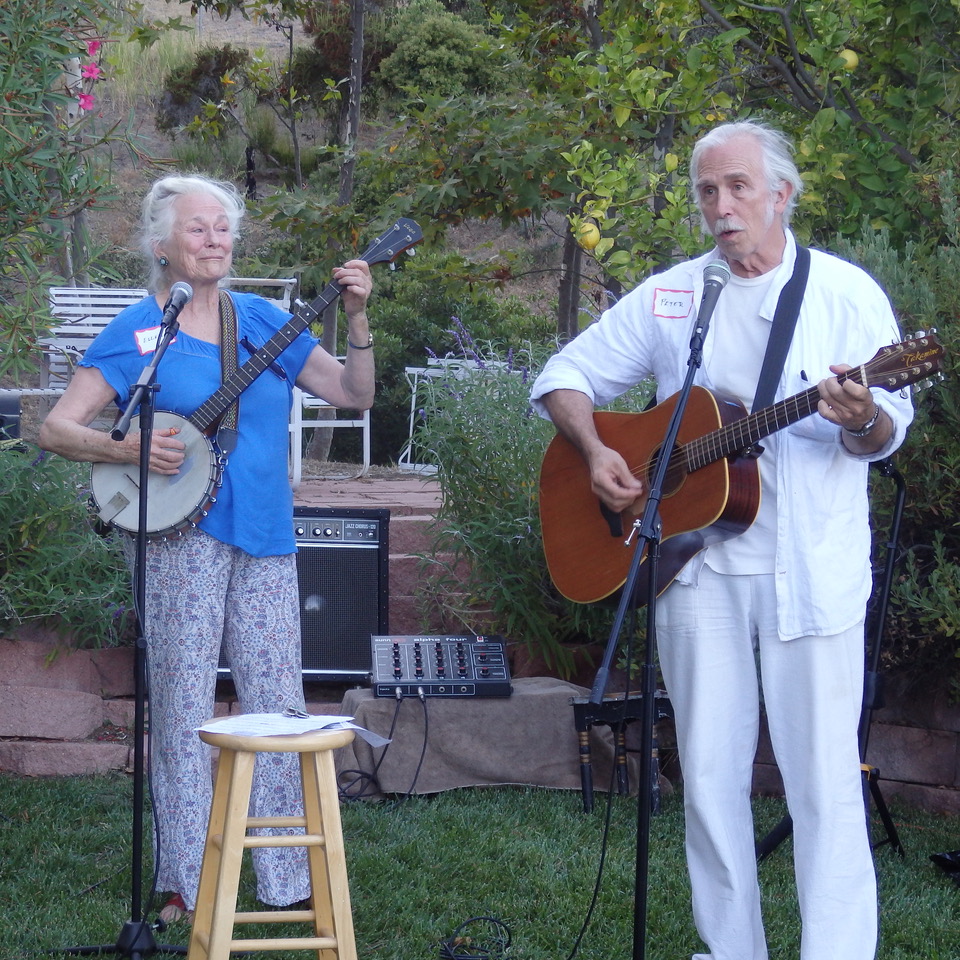 Theatricum Botanicum Artistic Director Ellen Geer and her husband, acclaimed singer/songwriter Peter Alsop, sang renditions of Woody Guthrie’s “It’s Only a Skin Color,” and “Which Side Are You On.” 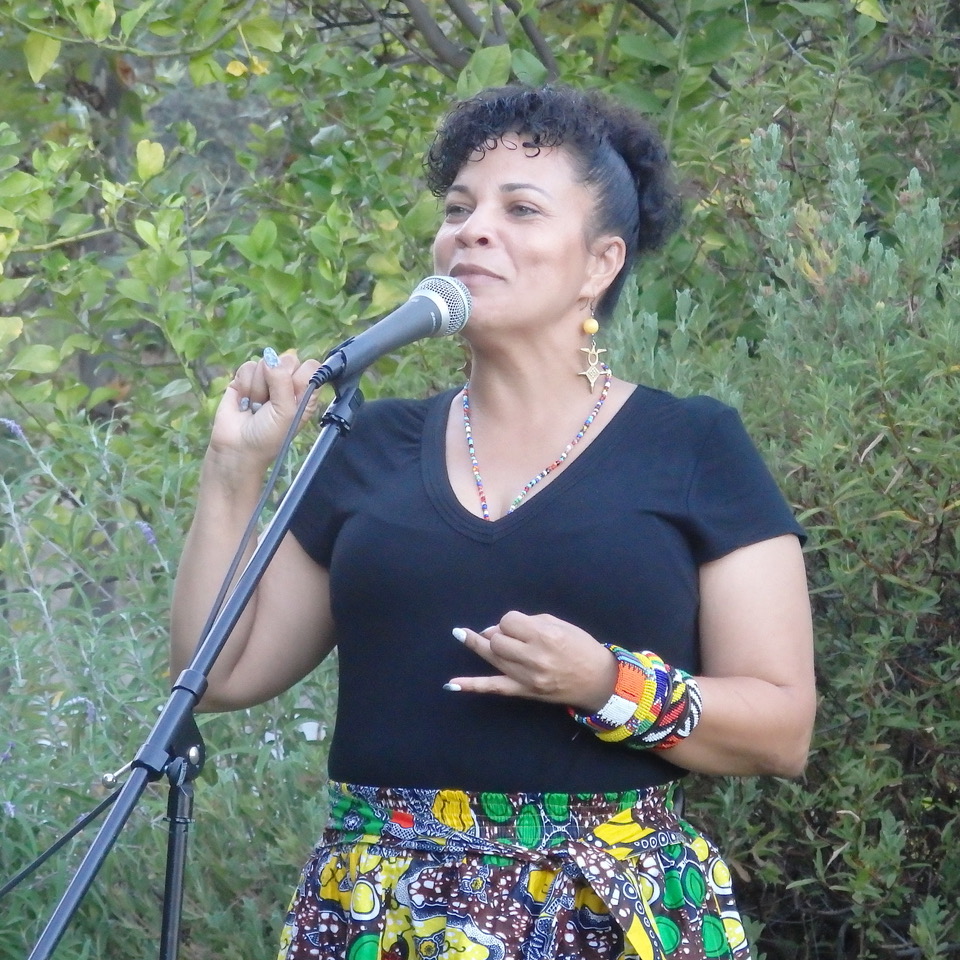 Dr. Melina Abdullah, co-founder of the Los Angeles Chapter of Black Lives Matter speaks to the group after receiving the Outside the Party Award for Peace & Justice. 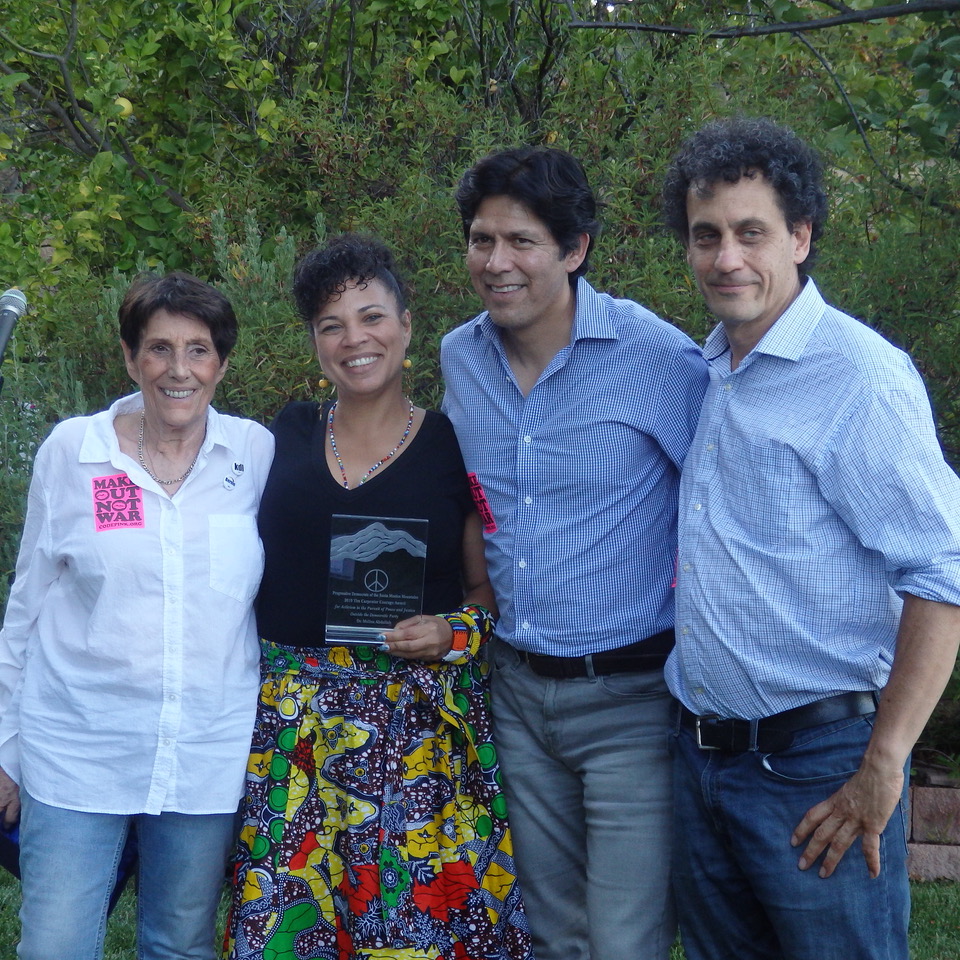 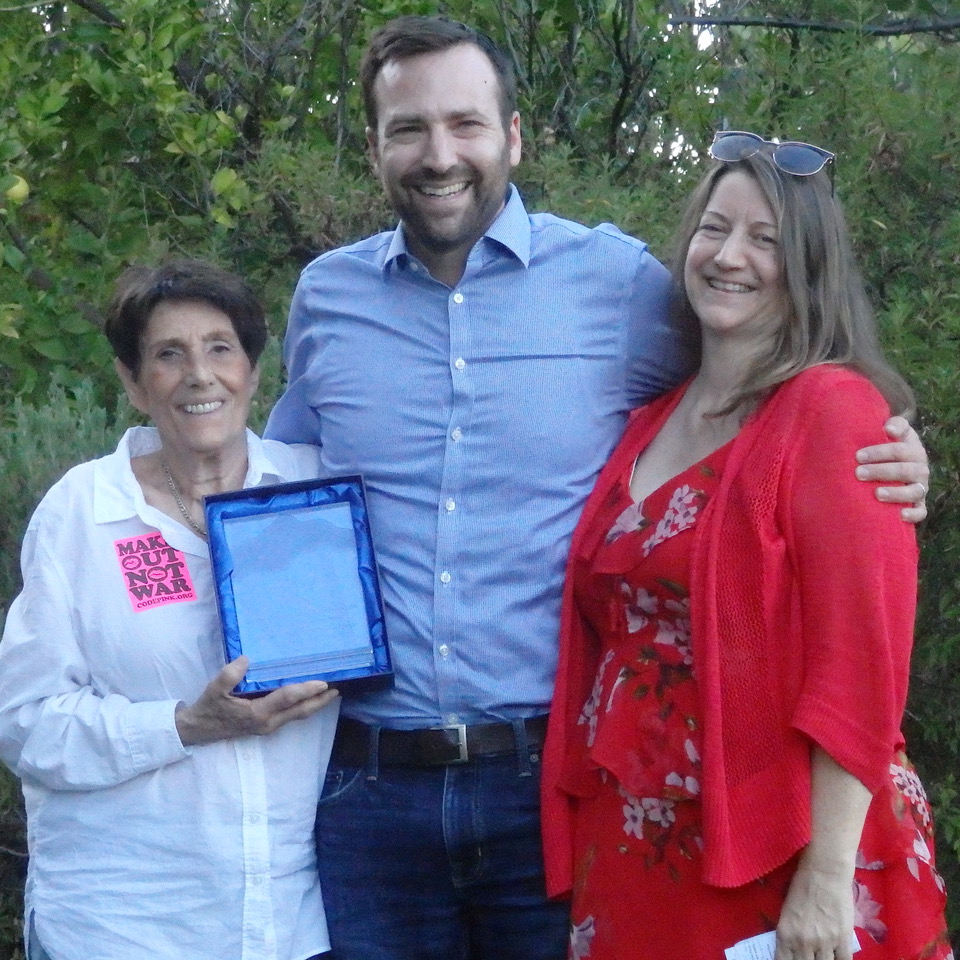 Dorothy Reik, president of the PDSMM (l) and Susie Shannon (r) presents the “Inside the Party” award to CA State Sen. Ben Allen.

With less than a year until the 2020 Democratic Primaries, nearly 200 people gathered in Topanga for the 14th Annual Progressive Democrats of the Santa Monica Mountains (PDSMM) Birthday Party on September 14, to honor Dr. Melina Abdullah and Patrisse Cullors of Black Lives Matter. The event also honored California State Senator Ben Allen for his environmental work.

Dorothy Reik, President of the PDSMM, hosted the event in her backyard on Saddle Peak Road, with a spectacular view of the Santa Monica Mountains.

“We are supporting Bernie, working on environmental and criminal justice issues, the climate emergency, and hoping Trump will be impeached. Every day he is in office is dangerous,” Reik wrote in response to what the PDSMM is standing for in 2019.

Reik wrote earlier that the PDSMM platform has always been active in the fight to end global warming; provide Medicare for All; eliminate poisons from the food supply; put an end to, in the words of Gore Vidal, America’s “perpetual war for perpetual peace”; and eliminate money bail, which Rep. Ted Lieu is pushing in D.C. and is happening now in California.

The day’s program of celebration and awards for progressive advocacy began with Theatricum Botanicum Artistic Director Ellen Geer and her husband, acclaimed singer/songwriter Peter Alsop, singing renditions of Woody Guthrie’s “It’s Only a Skin Color,” and “Which Side Are You On.” Guthrie, who wrote “This Land is Your Land,” was one of the most significant figures in American folk music in the early 20th Century, inspiring generations both politically and musically.

Emcee Alan Minsky, the Executive Director of the Progressive Democrats of America (PDA), introduced the presenters and award recipients.

California State Senator Ben Allen—Inside the Party. State Senator Ben Allen was first to receive the annual PDSMM honors. In 2014, Allen (D-Santa Monica) was elected to represent the 26th Senate District, covering the Westside, Hollywood, and coastal South Bay communities of Los Angeles County. He currently serves as chair of the Senate Environmental Quality Committee and the legislature’s Joint Committee on the Arts. He is also a member of the Senate Committees on Natural Resources, and Water and Governmental Organization.

Susie Shannon, who has just been appointed the California Political Director for the Bernie Sanders 2020 Presidential Campaign, praised Allen.

“Ben Allen is very, very, very smart and caring,” she said. “He is a steward of the environment and the mountains; he works with the Santa Monica Mountains Conservancy (SMMC) to preserve the mountains; he is on the Election Committee and the Environmental Committee, and is willing to put himself out there to do the right thing.”

Shannon then presented Allen with the PDSMM Tim Carpenter Courage: Inside the Democratic Party Award.

In his remarks, Allen said, “We are now drowning in plastic. We have become a throw away culture…but it’s people like you who will work against plastic and Styrofoam; we are the fifth largest economy in the world, our policies on plastics and the environment change markets globally.”

On May 30, 2019, the California State Senate passed legislation authored by Allen on a bipartisan vote of 28-8 that will set a course to significantly reduce the volume of single-use packaging sold in California and the top 10 single-use plastic littered items.

In a statement after the vote, Allen wrote: “This legislation provides a comprehensive plan to transition manufacturers and consumers toward more sustainable packaging and products. Local cities are forced to spend millions of taxpayer dollars on waste management and cleanup that should be spent on other essential services. I thank my colleagues for recognizing the need to address the plastics crisis by passing SB 54 today” [editor’s note: SB 54 was passed by the Senate but ended the current legislative session in the Assembly’s inactive file].

Abdullah is chair of the department of Pan-African Studies at California State University, Los Angeles and a co-founder of the Los Angeles chapter of Black Lives Matter.

“It is important not to close our eyes to what is happening,” she said. “The person in the White House is a dangerous white supremacist with the terrorism he has whipped up. We are now living in a neo-colonial state; it’s really a desire to hoard resources and a motivation for white supremacists.”

“We need to bring in people from all walks of life and empower them to enjoy a cultural exchange and a radical reimagining of systems,” she said. “I am pretty sure that me and my kids are the only Black folks in here; this should be your work as much as our work.” Abdullah urged the group to lend their connections, bodies and assets to the cause by attending police hearings, joining in protests and donating to relevant causes. She reassured the crowd that Black Lives Matter is very much alive and well, growing stronger every year in spite of being ignored by the media.

“They don’t get to silence us because they think our time has passed,” she said. “We’ve got to check these fools and say, ‘No’ to Joe!’”

Reik pledged that the PDSMM would donate $500 to Black Lives Matter.

Patrisse Cullors— Outside the Party. Patrisse Cullors, who was unable to make the PDSMM event due to illness, is an American artist who advocates for prison abolition in Los Angeles and is a co-founder of the Black Lives Matter movement. She also identifies as a queer activist.

“It is exciting and rare to be in the company of the real deal,” said Erika Feresten, President of the Pacific Palisades Democratic Club, as she spoke about Cullor’s career as an activist and cited her New York Times bestselling book, When They Call You A Terrorist: A Black Lives Matter Memoir.

Accepting the award on behalf of Cullors was Thandiwe Abdullah, Melina Abdullah’s 15-year-old daughter, who said, “We live in a challenging system. I lost faith in the political system but I’m getting there…. I may run for mayor at 19.”

Progressive Democrats of the Santa Monica Mountains is a chartered club of the Los Angeles Democratic Party. In 2013, Dorothy Reik was elected to the Board of the Progressive Caucus of the Democratic Party, several members of whom are delegates to the California State Party Central Committee. Ongoing issues include opposition to Arctic drilling; passing the Equal Rights Act for women; opposing a ridgeline development in Calabasas; and supporting renewable energy.