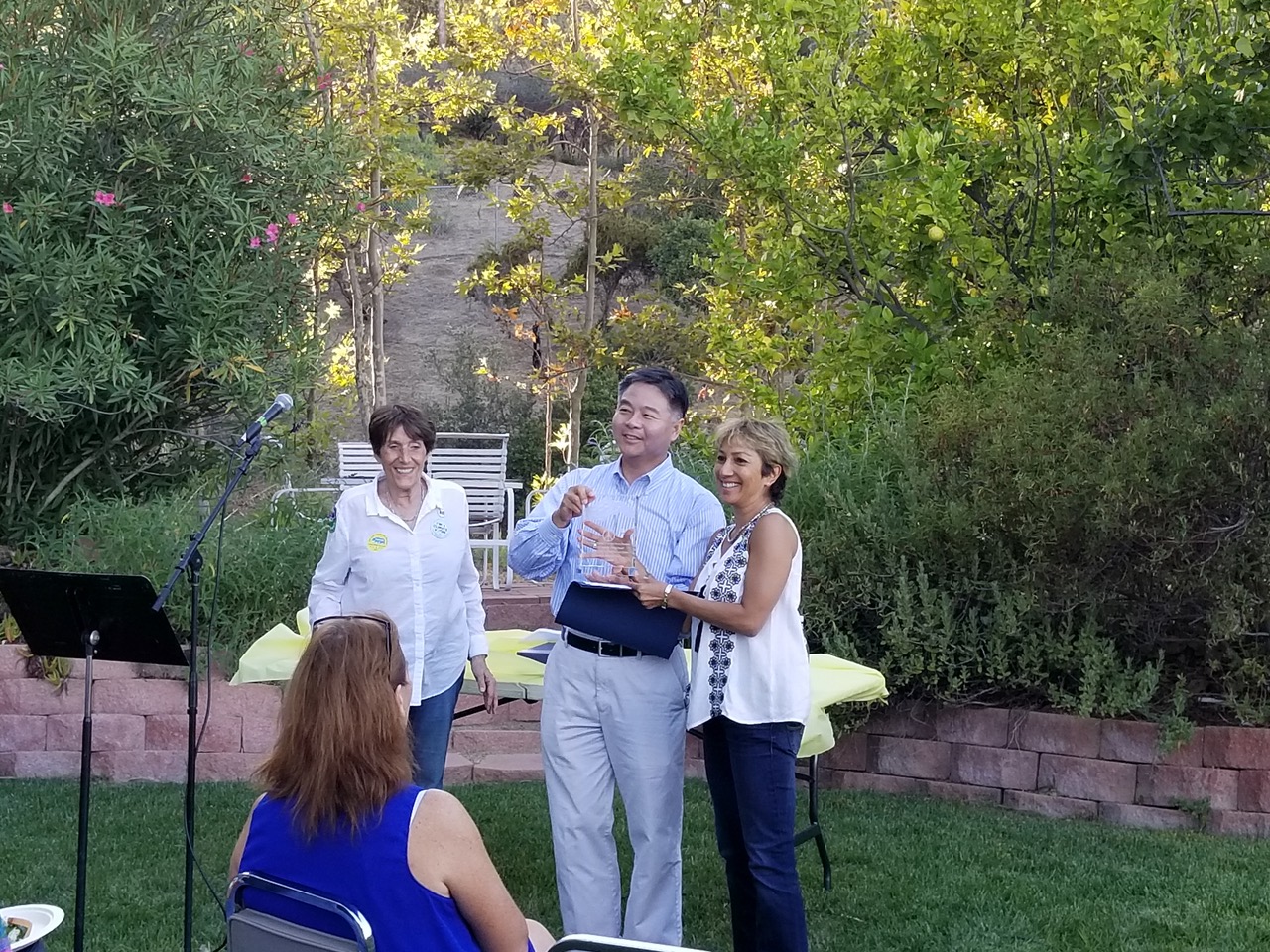 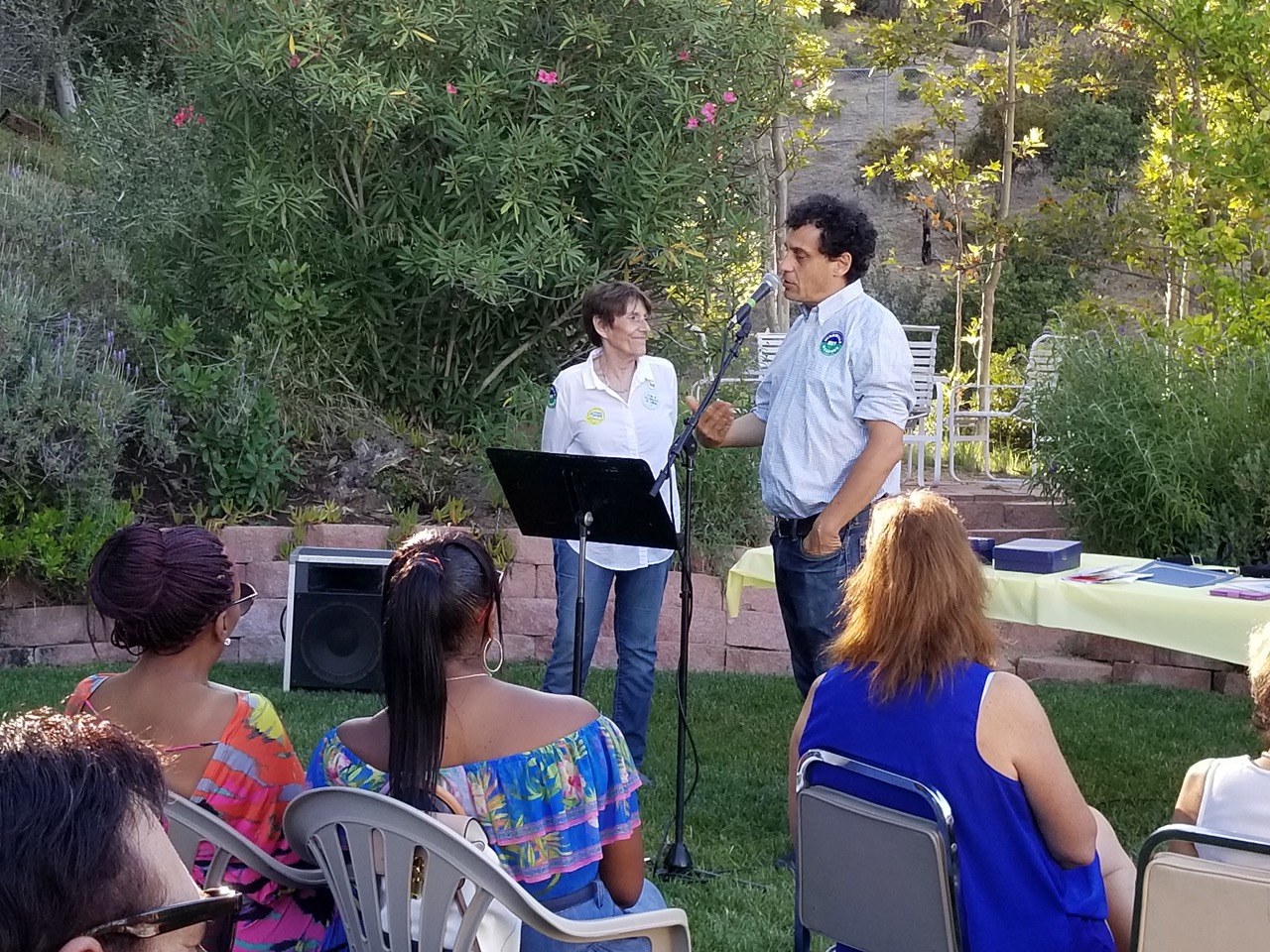 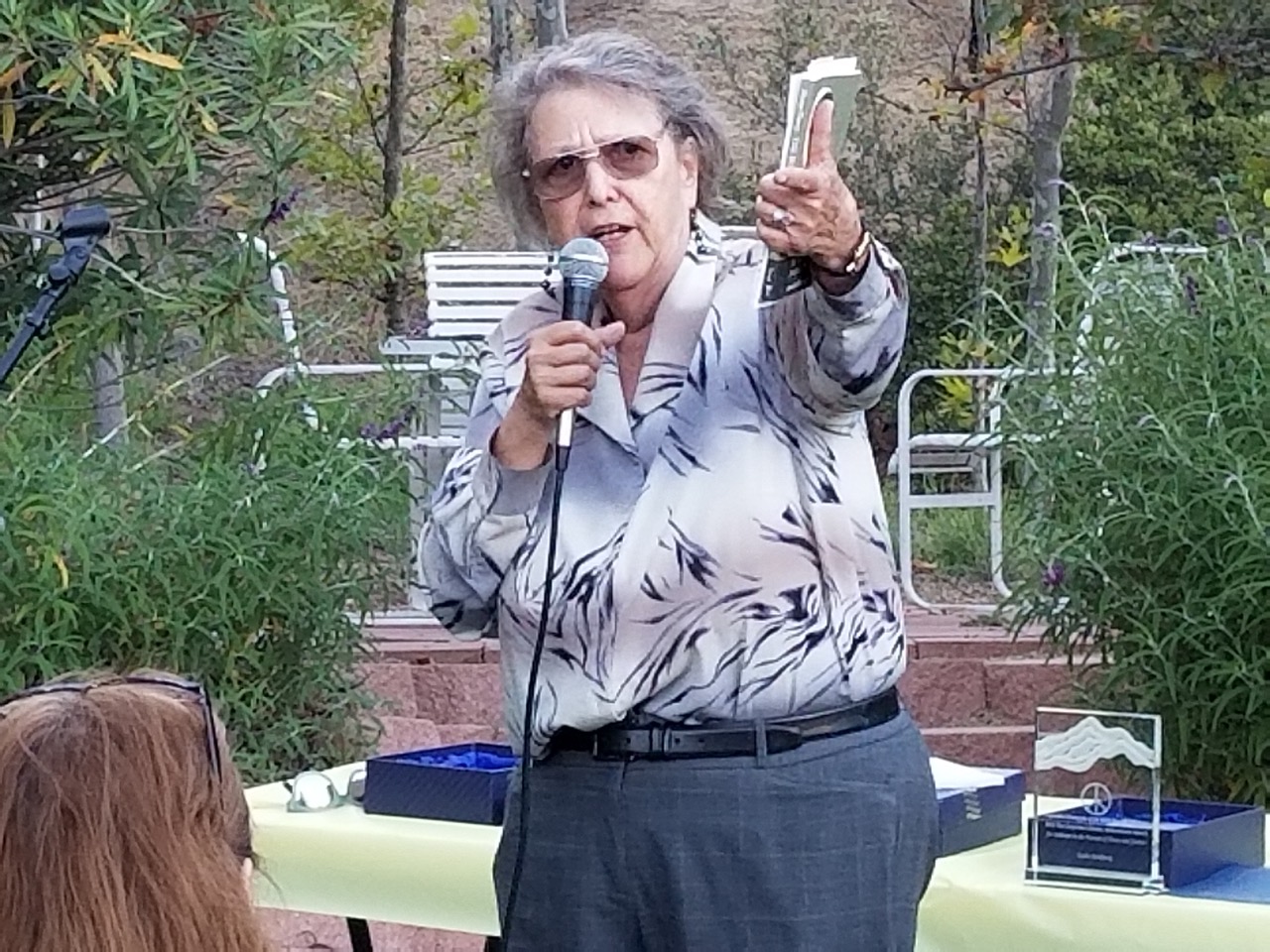 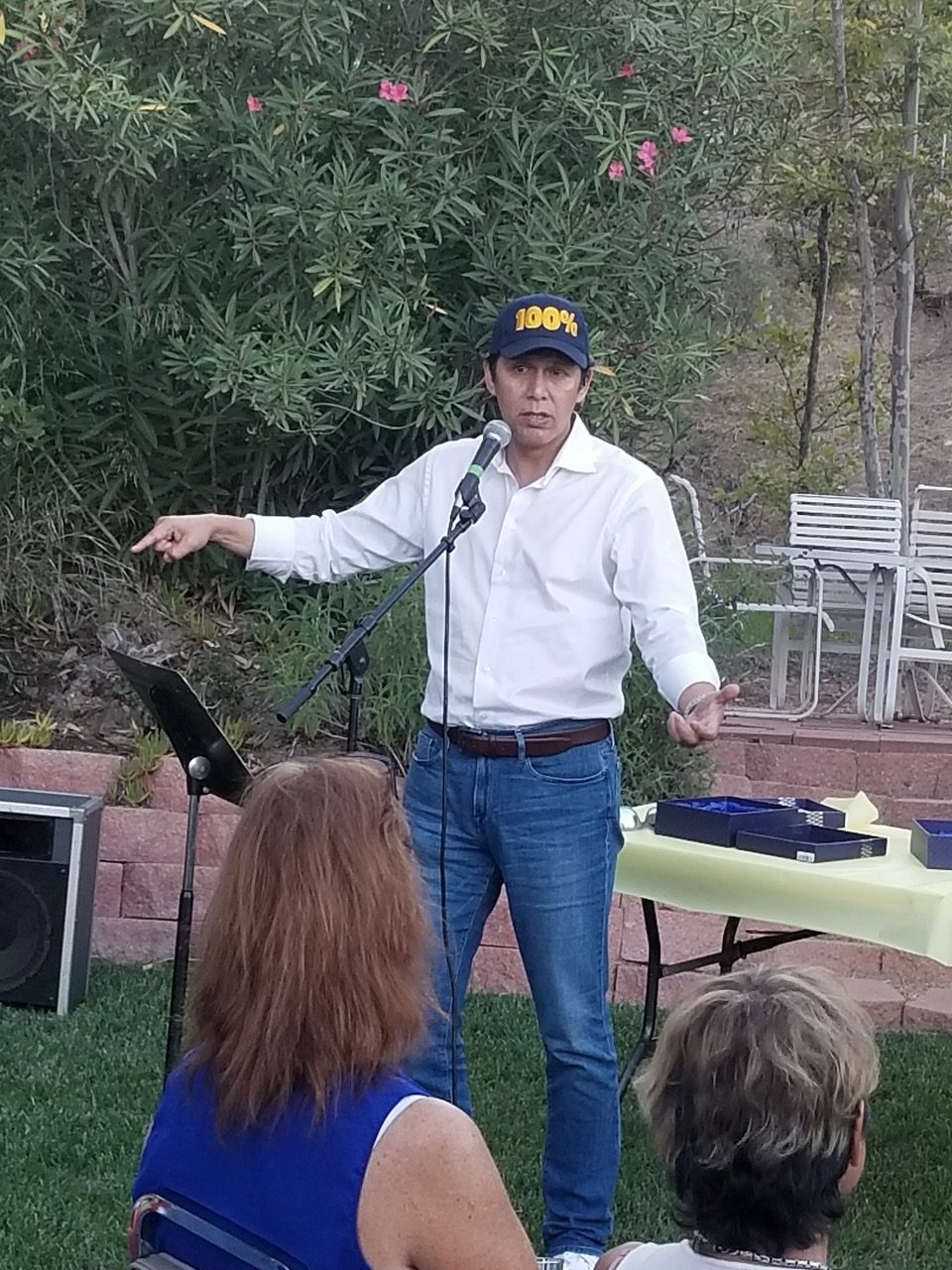 The Progressive Democrats of America ask “Can the Democrats take back the Senate and the House?”

The answer is, “Only if we take action!”

Dorothy Reik, President of the PDSMM, hosted the event in her backyard on Sept. 15 on Saddlepeak Road with a spectacular view of the Santa Monica Mountains.

“In memory of the Progressive Democrats of America (PDA) founder, Tim Carpenter, our awards are given for activism inside and outside the Democratic Party as well as a Lifetime Achievement award,” Reik wrote. “We worked hard to elect Congressman Ted Lieu and State Senator Henry Stern and, besides flipping the House, we are now working on electing State Senator Kevin de León to the U.S. Senate!”

Reik also wrote that the PDSMM has been active in the fight to end global warming, provide Medicare for All, eliminate poisons from the food supply, put an end to America’s “perpetual war for perpetual peace” in the words of Gore Vidal and to eliminate money bail which Ted Lieu is pushing in D.C. and which is happening now in California.

To begin the afternoon’s program, emcee Alan Minsky, newly elected as the Executive Director of the PDA and current program director of KPFK-FM 90.7 radio, introduced the lineup of presenters and awards recipients.

Former State Senator Kevin de León was a lead negotiator with Governor Jerry Brown and the state’s unions to secure a $15 minimum wage in California and then shepherded the legislation through both houses to the Governor’s desk.

According to his website, he overcame powerful opposition from Wall Street to pass SB 1234, which created Secure Choice retirement-savings program for California’s private-sector low-income workers.

Secure Choice was the first automatic IRA program of its kind in the nation and will help millions of Californians achieve retirement security when fully implemented.

So, to introduce the candidate, activists RL Miller and Susie Shannon introduced U.S. Senate candidate Kevin de León to the front and presented him with an “Inside the Party” award.

“Hello white people, there are not nearly enough people of color here,” Miller said to the crowd. “Kevin builds bridges between the coastal elites who support climate policies and the people of color who live where they are choked by freeway pollution.”

With that, Kevin de León stepped up to the microphone to make a case for his candidacy against Dianne Feinstein in November.

“These are very extraordinary times in our nation’s history,” he said. “These are dangerous times; this President makes Richard Nixon look like a choir boy in comparison. What is at stake is a women’s right to choose, what’s at stake is our children’s right to breathe clean air into their lungs and drink clean water.”

He spoke of human rights, civil rights of Muslim-Americans, immigrants, people of color, of women and voter suppression.

“What’s at stake is the issue of voting rights,” de León said. “Everything is on the line, this is not a practice run, this is the real deal unlike anything we have ever faced in history”

Then, de León put on a red “100%” hat to represent the landmark environmental bill Gov. Brown had just signed that week.

“If the democratic establishment in Washington, instead of resisting, continues to be assisting the current status quo in Washington D.C and it is our progressive values that move forward from a position of strength that improves the human condition for all human beings regardless of who you are, or who you love, or where you come from, regardless of the hue of your skin, regardless of which god you pray to.”

He spoke of how the fifth largest economy in the world should provide Medicare for all and welcome those who immigrate here.

“In this great state, our diversity is our strength, it is our DNA,” de León said. “It’s how we identify ourselves. That is how progressive politics works, it provides sanctuary to all who come here; they deserve to become full-fledged Americans. We don’t ban it, we don’t deport it and we sure as hell don’t wall it off, not in California!”

U.S. Congressman Ted W. Lieu presented Muslim activist Ani Zonneveld with the “Tim Carpenter Courage Award for her activism in the pursuit of Peace & Justice Outside the Party.

“Within the Progressive Muslim movement, Ani is a force of nature,” Lieu said. “She is committed to the First Amendment and is working to help stop child marriage in the United States and in California.”

Then, Lieu presented her award which prompted enthusiastic applause from the audience.

Ani Zonneveld is a writer, singer/songwriter and founder and president of the Muslim for Progressive Values (MPV) an international human rights organization that advocates for social justice and equality for all; women’s rights and those of the LGBTQ community,

“The work I do on behalf of the MPV, we are as secular as we come,” Zonneveld said. “Therefore, I’m kind of pissed off that this country is becoming more of a theocracy than it ever was intended to become. How are we any different than Saudi Arabia…it’s a flaw. I am a Muslim who fights for separation of religion and state and secularism.”

Zonneveld, who is from Malaysia, said she works tirelessly in the Middle East to help get girls and women the education they deserve.

“They believe girls are not allowed, don’t deserve education, they are property, they don’t understand the Koran; they listen to the Mullah,” she said. “We work with feminist scholars of the Koran in Tunisia where I see girls flying off out of the workshops with wings and that is why I do what I do.”

Zonneveld decried the practice of child marriage in the United States and California, not just among Muslim families but within conservative Jewish and Christian communities.

“Child marriage is a problem in California,” she said. “Ask those people you are supporting, ‘what is your position on marriage?’ Do we have a law in California on female mutilation and cutting? We need to educate ourselves on this issue, progressives, where do you stand on that?’”

Zonneveld then spoke from the heart to encourage understanding of Muslims in the United States.

“We are looked at as the “other,” she said. “People believe we have our own belief systems, our own culture, our own God, that is not true, we will always be the other until we create our own American-Muslim identity.”

Larry Gross, Region 12 Director of the California Democratic Party, introduced Jackie Goldberg when presenting her with the PDSMM Award for Lifetime Achievement.

“I’ve known Jackie as an activist, friend, candidate and elected official,” he said. “She is the most principled and effective person I have known. She protested at Berkeley for the free speech and civil rights movements and protested against the war in Vietnam. She went the classroom as a teacher to a seat on the LAUSD school board in 1993 and to the Los Angeles City Council until 1997 and elected to the State Assembly in 2000.”

Gross said that while on the Assembly, Goldberg authored a living wage ordinance, co-authored a bill to save housing, revitalized Hollywood and hosted numerous progressive bills, including expanding the rights of domestic partners and expanding the WIC program.

“She’s one of a kind; she is the one who has been elected to office, who has never veered from her principals,” Gross said. “The Lifetime Achievement is well deserved.”

After the receiving her award, Goldberg took to the microphone.

“Thank you very much for this honor,” she said. “I know this organization, you really are Progressive Democrats, still very active in a variety of things.”

Then Goldberg spoke of her enthusiasm for the country in spite of the election of “45,” the name she uses for the President.

“This is a time lots of people are discouraged, down and defeated,” she said. “But there is an enormous amount to be optimistic about; more people are politically active than any time in history.”

Goldberg encouraged Progressives to help get out the vote, take action, register people to vote, knock on doors and talk to your friends, family and neighbors.

“What I’m telling you is, we have a chance to really make a difference, because we cannot fight and say this person is not quite Progressive enough and not help them,” she said. “At this moment in history, the most radical thing to do is to capture the government again, that may be with people we don’t thing are terrific Progressives!”

To mounting cheers, Goldberg encouraged folks to fight for change.

“We are not going to make the same mistakes, we are not going back, we are going forward,” she exhorted. “The number one problem is racism; if we don’t get our arms around this issue sometime in the future, it will be our undoing. Knock on doors, talk to people, act like our country’s future depends on it, because it does. If this does not does look like Germany in the 1930s, I don’t know what does!”

Progressive Democrats of the Santa Monica Mountains is a chartered club of the Los Angeles Democratic Party. In 2013, Dorothy Reik was elected to the Board of the Progressive Caucus of the Democratic Party, several members of whom are delegates to the California State Party Central Committee.

“PDSMM has been active in the fight to end global warming, provide Medicare for All, eliminate poisons from our food supply, put an end to America’s “perpetual war for perpetual peace” in the words of Gore Vidal and to eliminate money bail which Ted Lieu is pushing in D.C. and which is happening now in California,” Reik wrote.

When asked what they endorse now during the Trump Administration, Reik said she is trying to get the Democrats on board with the RefuseFascism website.

“We will be working to elect Katie Hill to replace Rep. Steve Knight (the 25th district in the Santa Clarita Valley) among other races,” Reik said. “My friend is running the Randy Bryce campaign against Paul Ryan and we are trying to get California even bluer!”

Reik said the PDSMM is still working on getting single payer in California and a fracking moratorium.

Ongoing issues include opposition to Arctic drilling; support for raising the minimum wage; passing the Equal Rights Act for women; support for the Iran deal; oppose the XL pipeline; oppose a ridgeline development in Calabasas and support renewable energy.

What’s on Your Ballot?