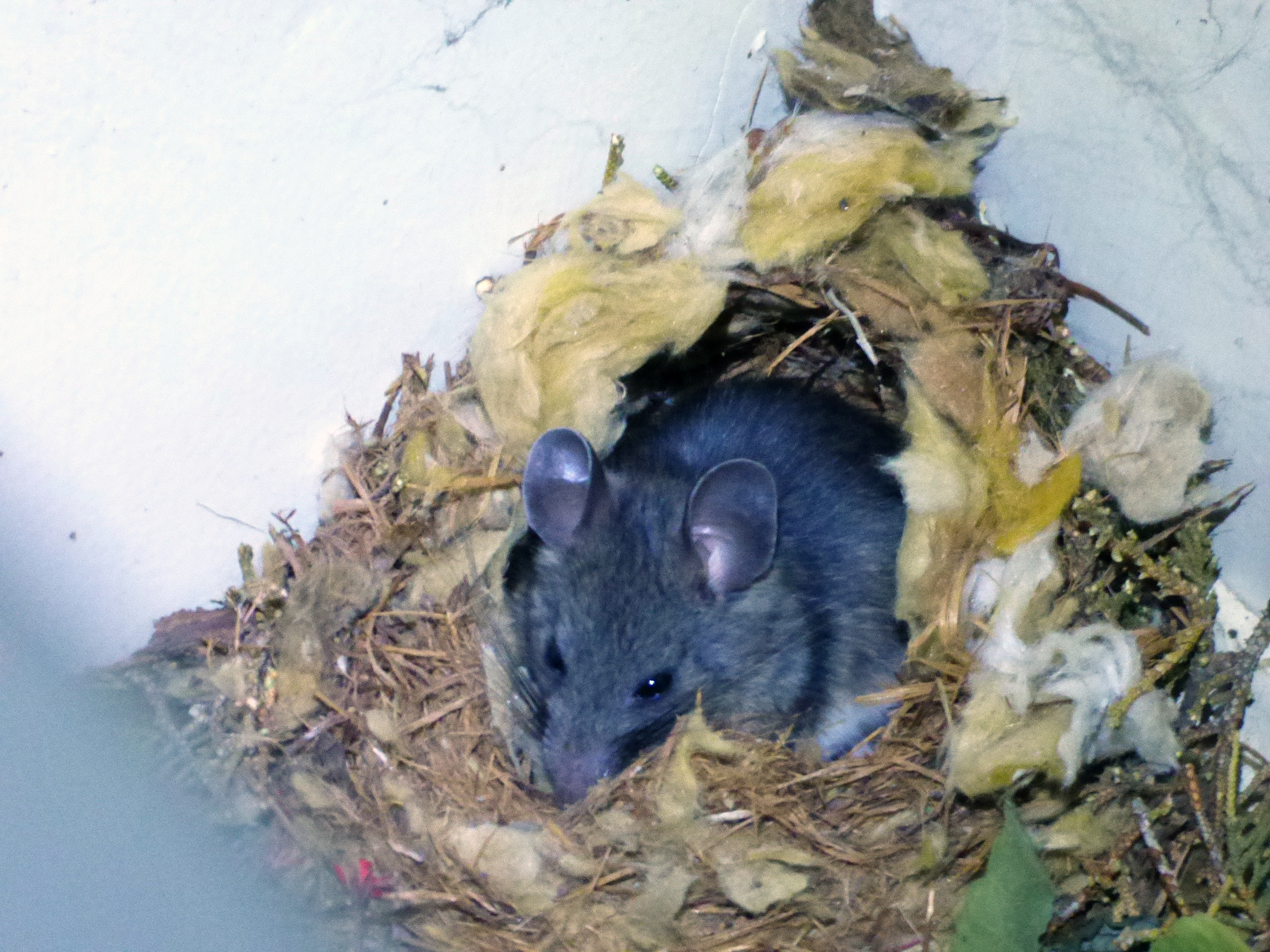 A rat sitting in the nest she cleverly made out of insulation from the heater, with a stash of succulent plants harvested from the garden for snacking. If your plants mysteriously begin to disappear, it may mean a rat is in residence. This one harvested all of my mom’s geraniums. 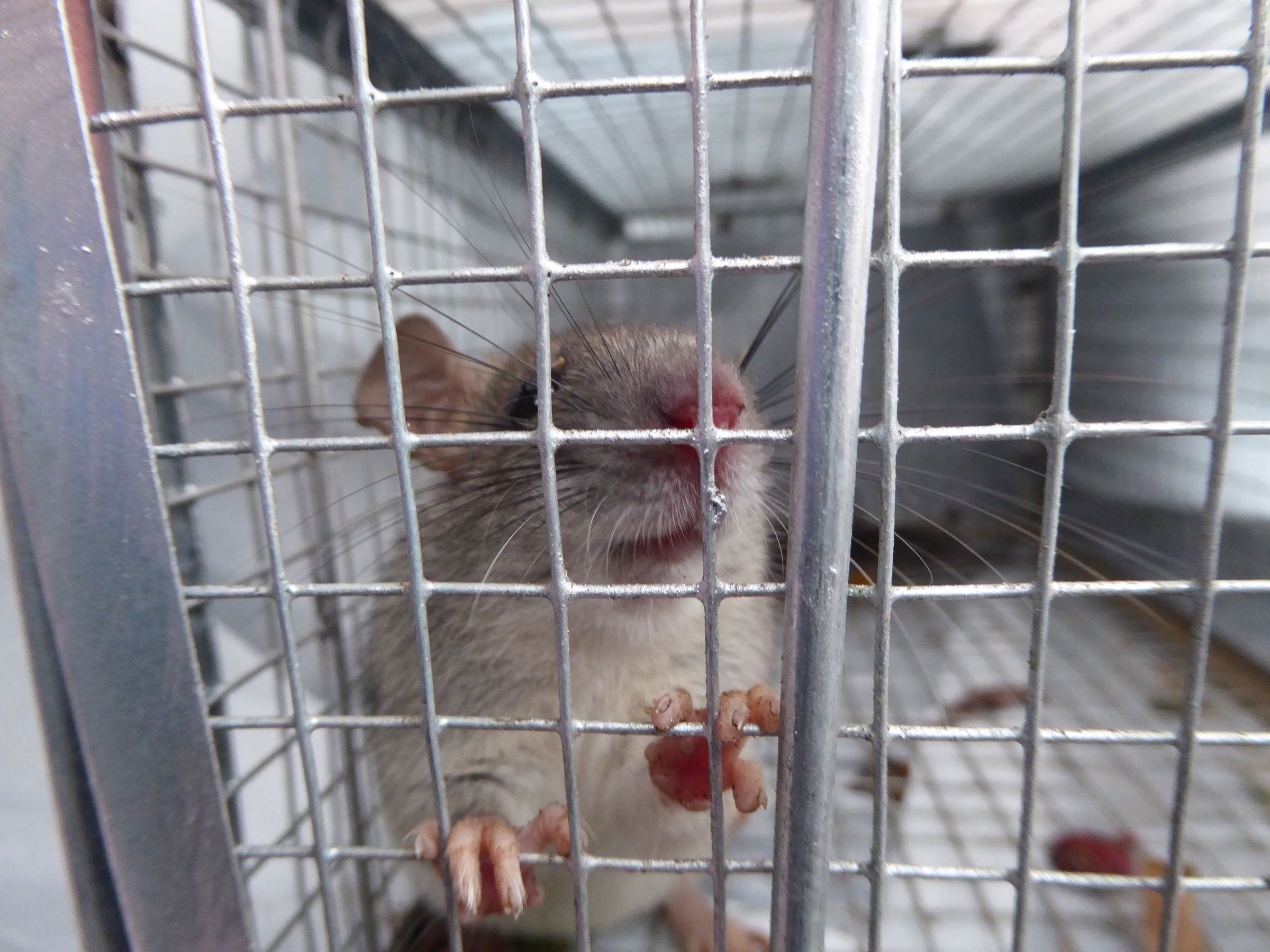 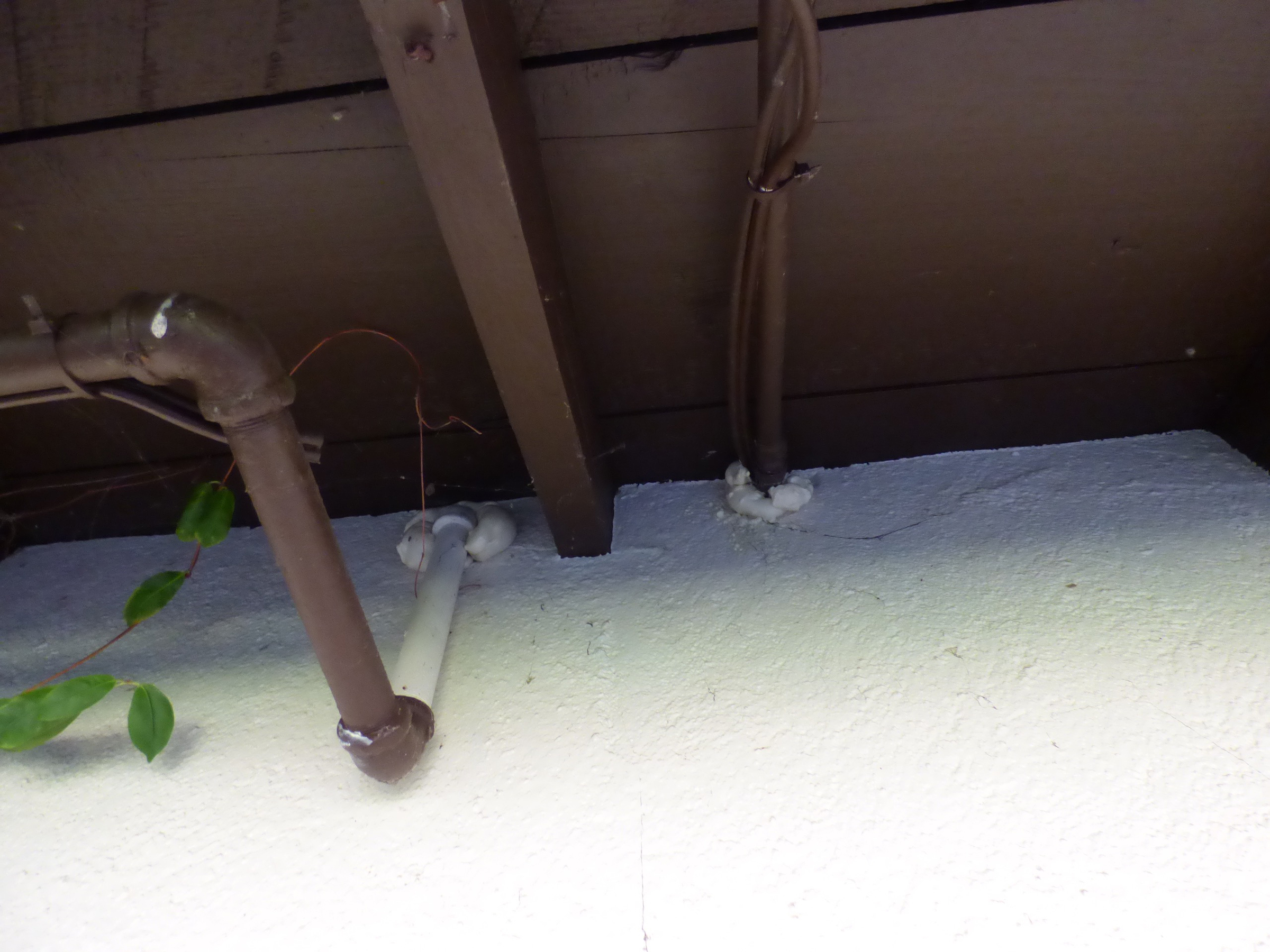 From NPS guide to rodent-proofing structures, by Gerard Hoddenback, Rodent Proofing Consultant to the NPS. I found it helpful.

It is said that bards once had the gift of charming rats. The poet Johann Wolfgang von Goethe wrote about “the bard known far and wide, the travell’d rat-catcher beside…” had the power to “cleanse the place from ev’ry one, all needs must helter-skelter run.”

Alas, no amount of music or poetry seems to have much effect on contemporary rodents. Bards are in short supply, but rats continue to prosper.

In fact, humans are so frightened of rats that we’ve been willing to contaminate vast areas of the planet with poison in an effort to eliminate this small rodent. A growing body of research indicates it isn’t working. Rats continue to thrive, while wildlife and domestic animals die instead.

National Park Service (NPS) research indicates that nearly 100 percent of the mountain lions it studies in the Santa Monica Mountains National Recreation Area (SMMNRA) have been exposed to multiple forms of rodenticide. Lab results indicate that P-41, the Verdugo Mountains puma found dead in October, revealed more than one type of rodenticide in its liver, although the big cat’s cause of death is still not known.

That’s why local environmental organizations like the Topanga Creek Watershed Committee (topangacreekwatershedcommittee.org), Poison Free Malibu (poisonfreemalibu.org) and the Santa Monica Mountains Fund (samofund.org) are promoting less deadly alternatives to poison, but dealing with a rat problem can still be daunting. This reporter learned that first hand, when a family of rats took up residence in her attic.

Unfortunately, a “travell’d rat-catcher” who didn’t use poison was impossible to find. We decided to tackle the problem ourselves.

We identified our rodent as a Norway rat, the most common rodent interloper in the Santa Monica Mountains, and learned that while all rats can fit through very small holes, the Norway rat is fairly robust and would have a hard time cramming its bulk through a hole smaller than the size of a dime. Also, while all rats have powerful teeth, they are more likely to exploit existing holes than create new ones, even in soft materials like wood.

The NPS guide stated that Old World rats usually range within about 100 to 150 feet of their nest, and that rats caught inside of buildings, tagged and released by NPS personnel, show up outside the building and vice versa. We inferred from this that we could catch our rat outside as easily as inside.

Old-fashioned snap traps are generally considered the most effective non-toxic lethal option, while glue traps are the least humane.

We opted for a humane box trap to catch our rodent. Trapping the rat alive ensured that we wouldn’t run the risk of accidentally harming a bird or another small animal like a squirrel or rabbit, but it is important to check this type of trap frequently to prevent the trapped animal from suffering shock and dehydration.

We used a trail camera to find the most likely places to intercept a rat, after learning that rats are creatures of habit who usually travel on the same routes, often staying close to the walls of the house, and rarely straying too far from home. We caught our rodent family of three on successive nights using trail mix for bait. We were careful to only set the trap at night and to check it often.

It’s illegal to relocate non-native rats to public land, but we had a friend with acreage who offered to provide a relocation site. Problem solved, but the best solution is excluding rodents before they become a problem.

“Prevention is the best way to deal with rodents,” Schulman told us. “The only way to permanently eliminate rats is to find all entrances and seal them up,” she said.

Schulman explained that she had her own issues with rodents burrowing under the foundation of her house when she first moved to the local mountains. She solved the problem by having a contractor install a concrete barrier around the foundation. Schulman recommends checking for gaps around and under the foundation as well as on the roof, especially wherever there is flashing (metal trim) and around vents. She also suggests checking for and sealing up openings around water pipes, ventilation pipes and electrical conduits.

We took her advice. Armed with rolls of hardware cloth, copper mesh and steel wool, a high-powered flashlight, a hand mirror and several tubes of caulking, we set to work inspecting the house for openings and filled every hole we found. Sealing gaps can help prevent other unwanted guests, including mice, spiders, bees and even larger creatures like raccoons and bats.

Not everyone has the time or inclination to tackle a rat problem directly. Schulman recommends seeking out an exclusion company rather than an exterminator if professional assistance is required. Her organization’s website lists the only company she has found in the greater L.A. region that guarantees not to use rodenticide.

A rodenticide ban was incorporated into the local coastal program (LCP) for the unincorporated Los Angeles County portion of the Santa Monica Mountains, but neighboring areas still aren’t 100 percent on board. Advocates hope that the LCP for the North Area of the mountains will include the same ban, and that the City of Malibu will enact its own ban in 2018.