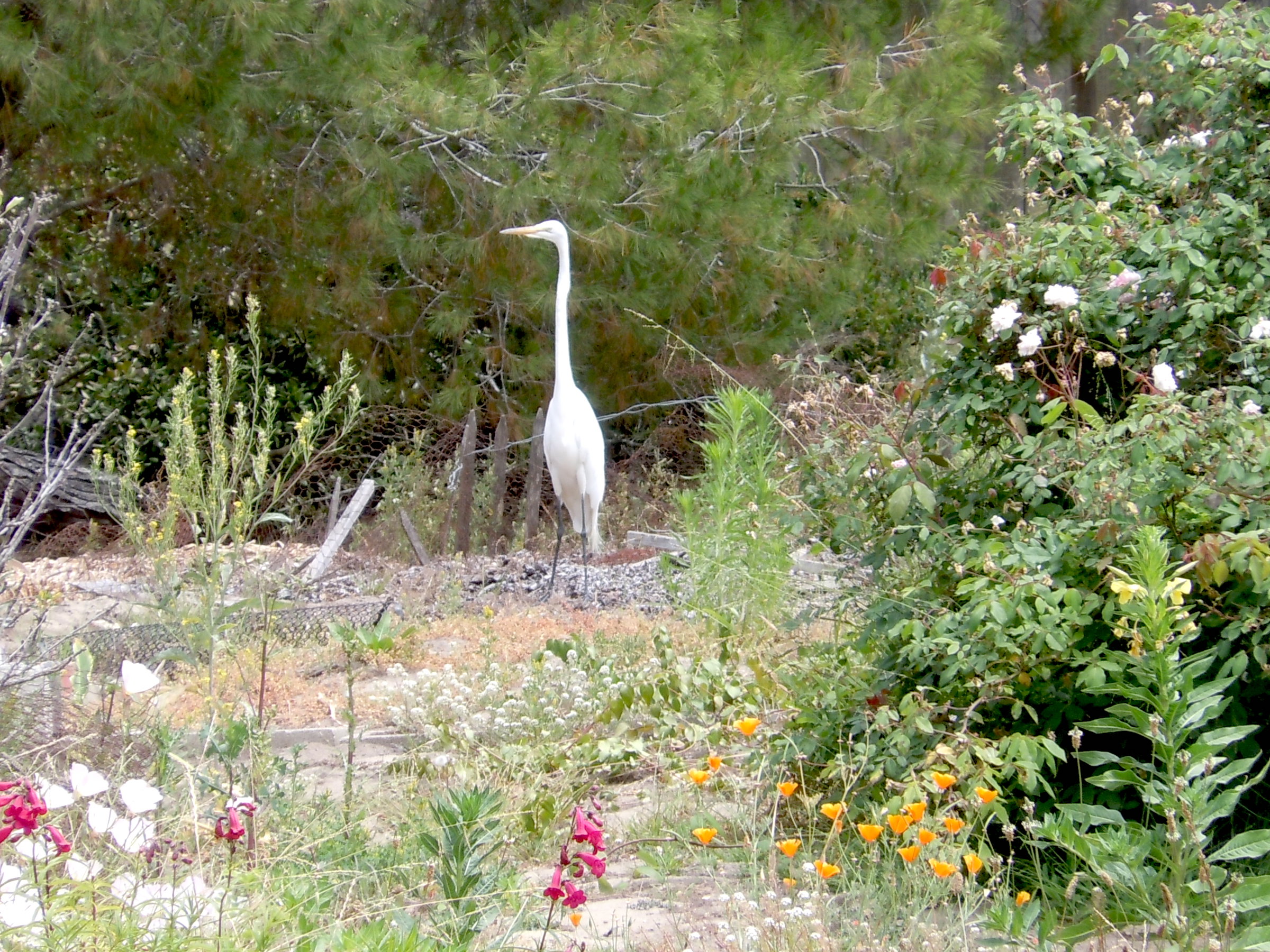 Officially a wetland bird, the great egret is equally at home in meadows or even gardens. This bird was foraging for lizards and gophers in a neglected corner of a local garden. Photos by Suzanne Guldimann 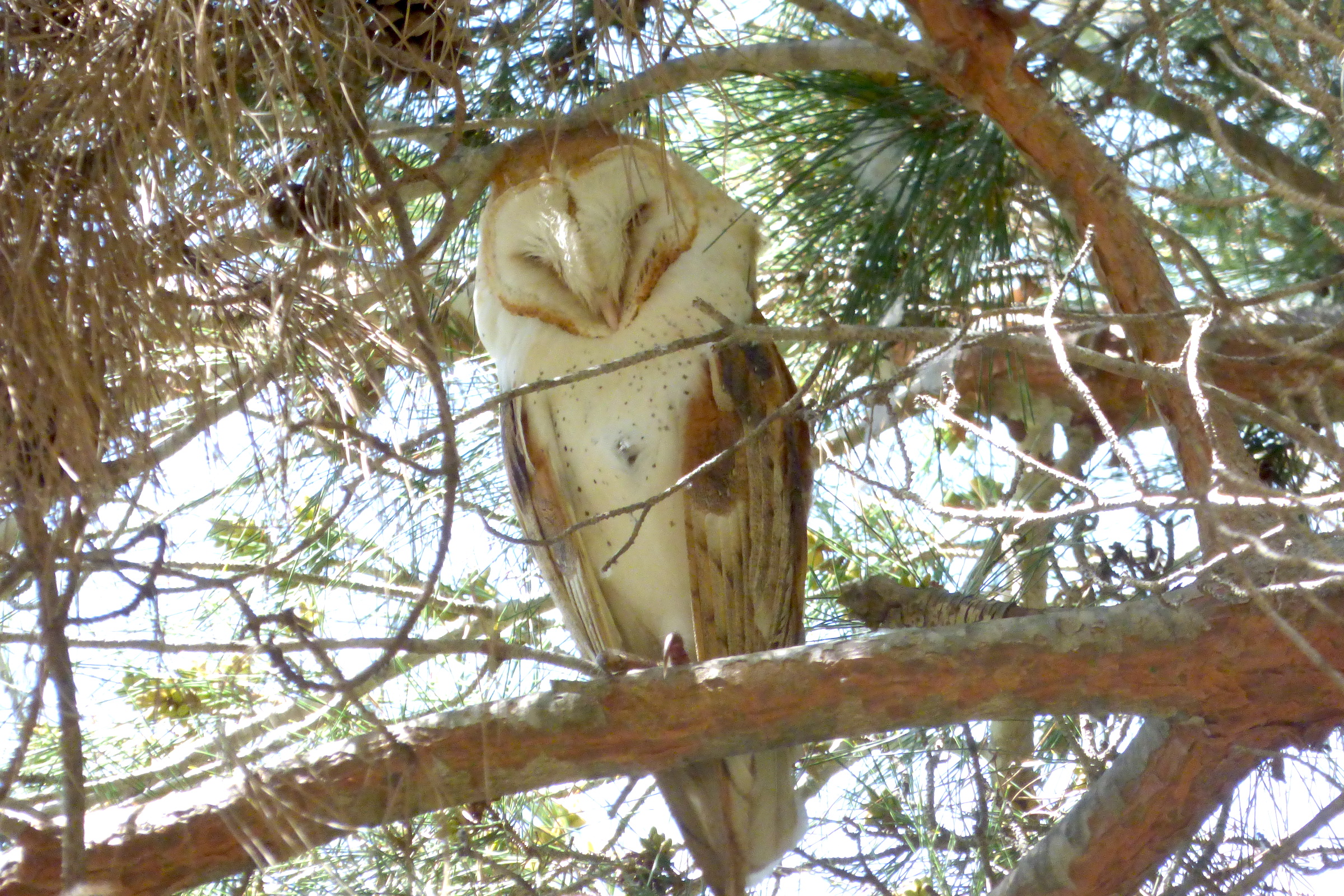 The barn owl is the most common owl in the Topanga area. Although its body feathers can range from buff colored to cinnamon brown, its face and the insides of its wings are white, giving it a ghostly appearance in flight. 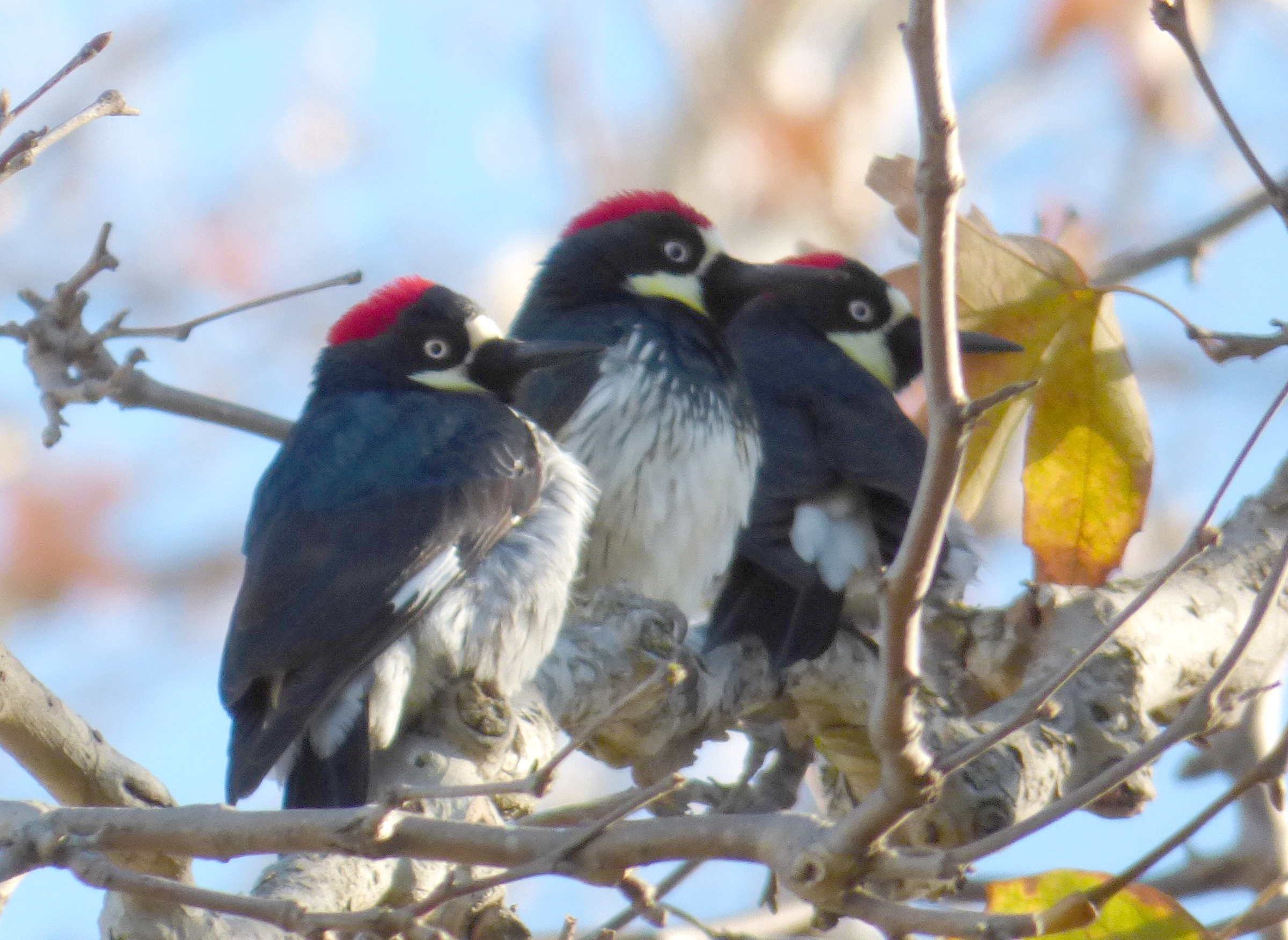 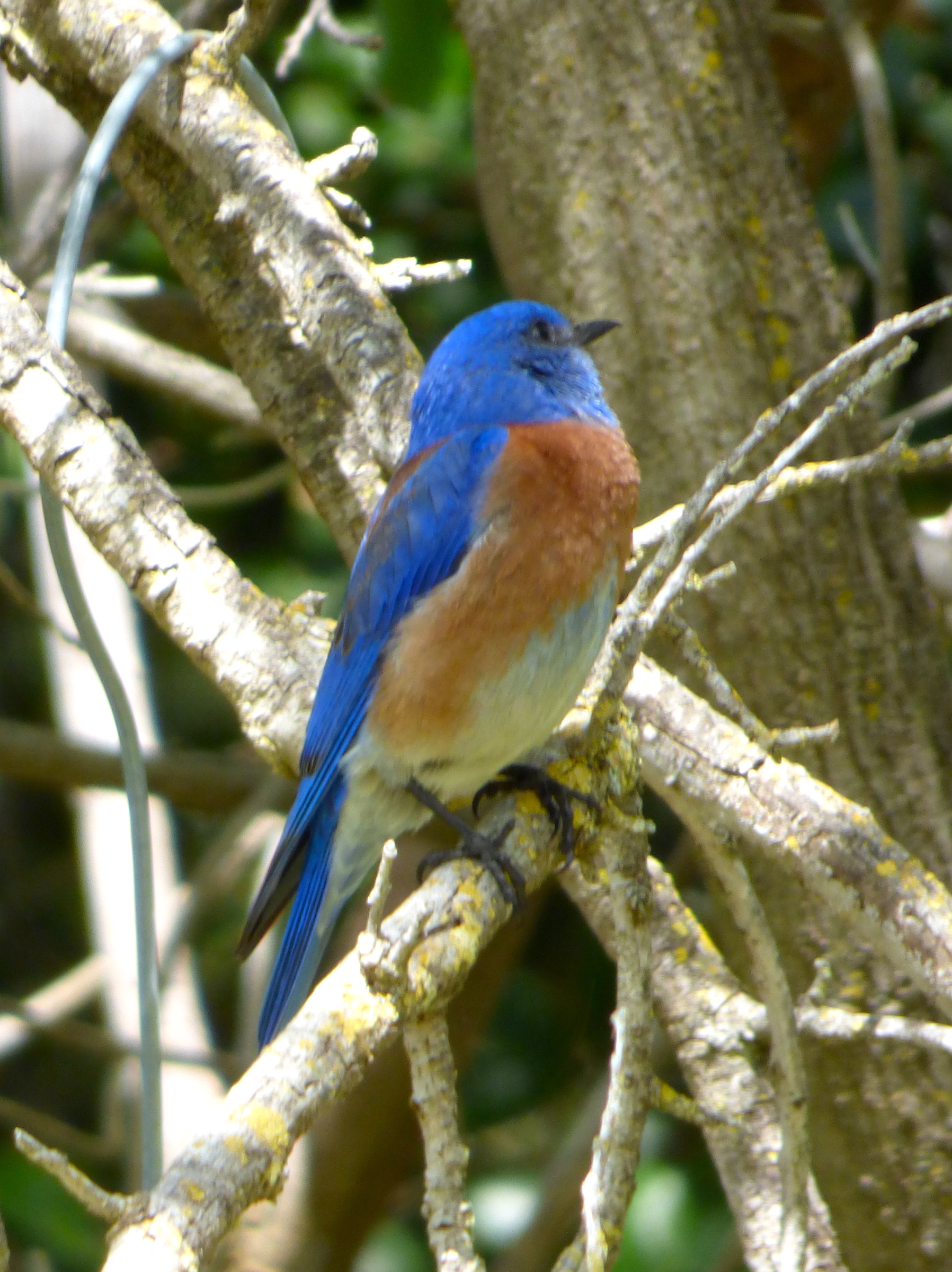 This red, white and blue beauty is a true bluebird, Sialia Mexicana, the Western bluebird. It is happy to make its home in a backyard nestbox, and in a regular summer resident throughout the Santa Monica Mountains. 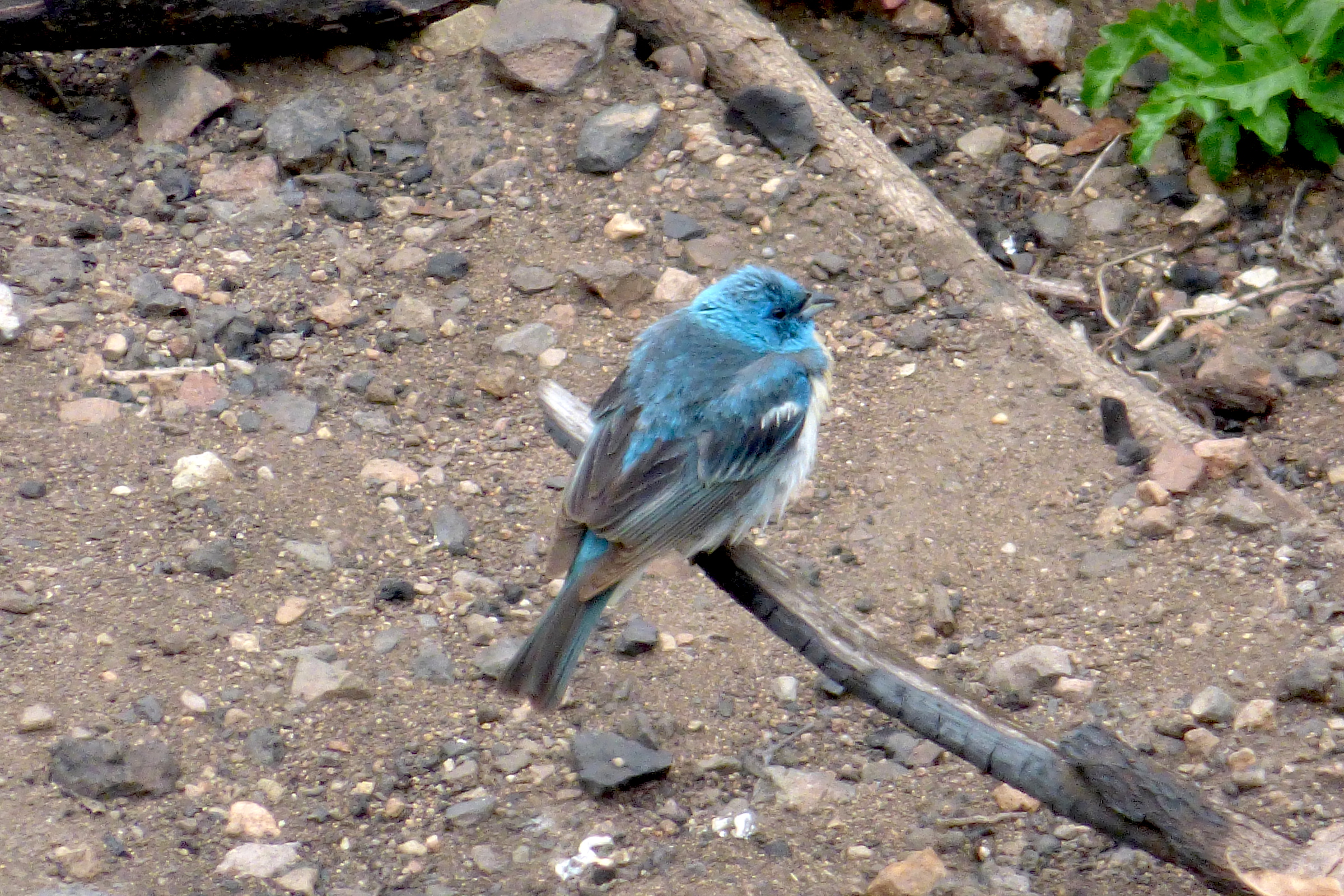 The beautiful sky-blue lazuli bunting isn’t rare, but it isn’t common either, although its an annual summer resident of the Santa Monica Mountains and breeds here. Look for this bright blue bird at Malibu Creek State Park, or along the Backbone Trail in the Woolsey Fire burn area, where it appears to be thriving in the aftermath of the fire. 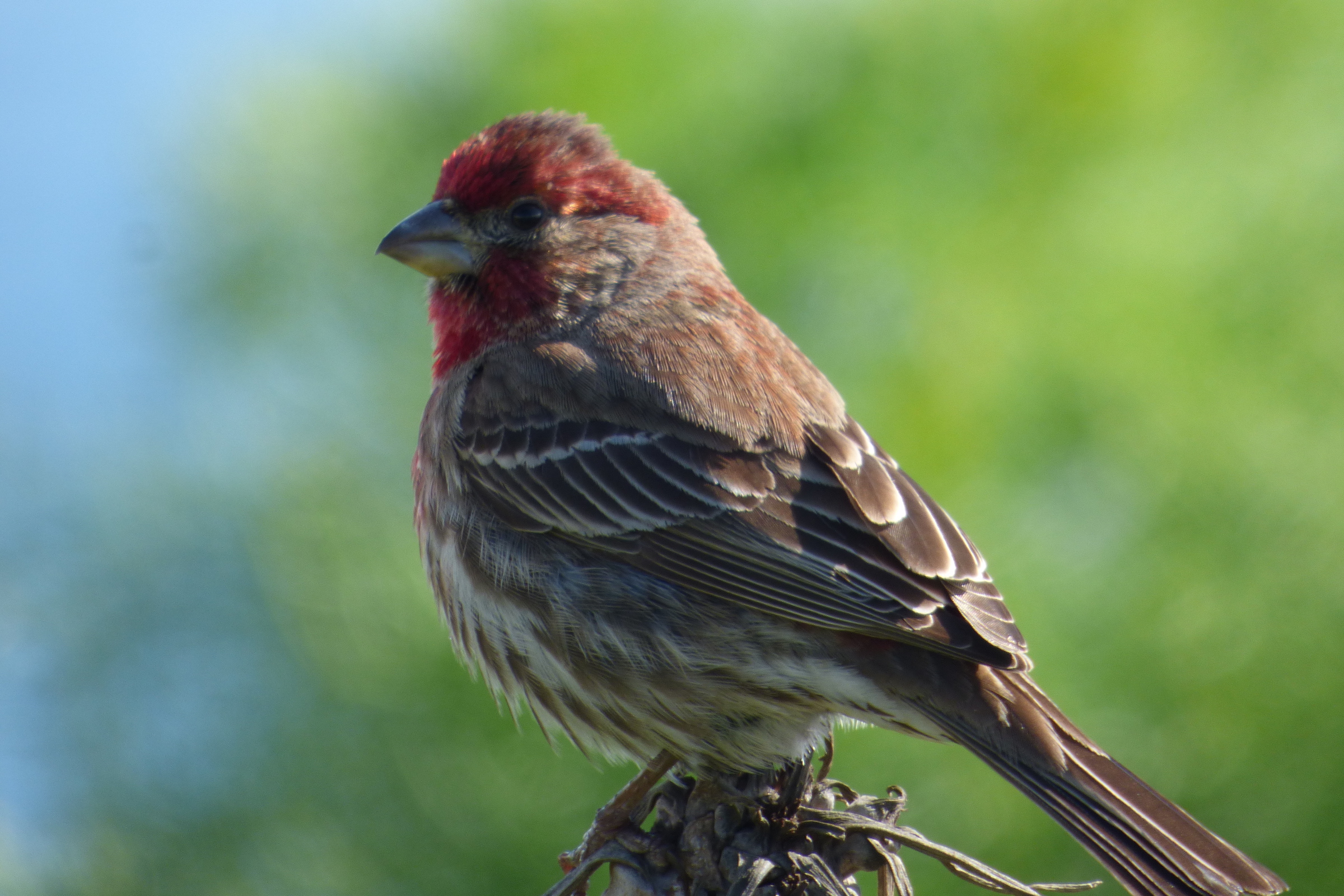 The house finch is so ubiquitous that it often doesn’t get a second look, but the male of this species has beautiful red feathers. 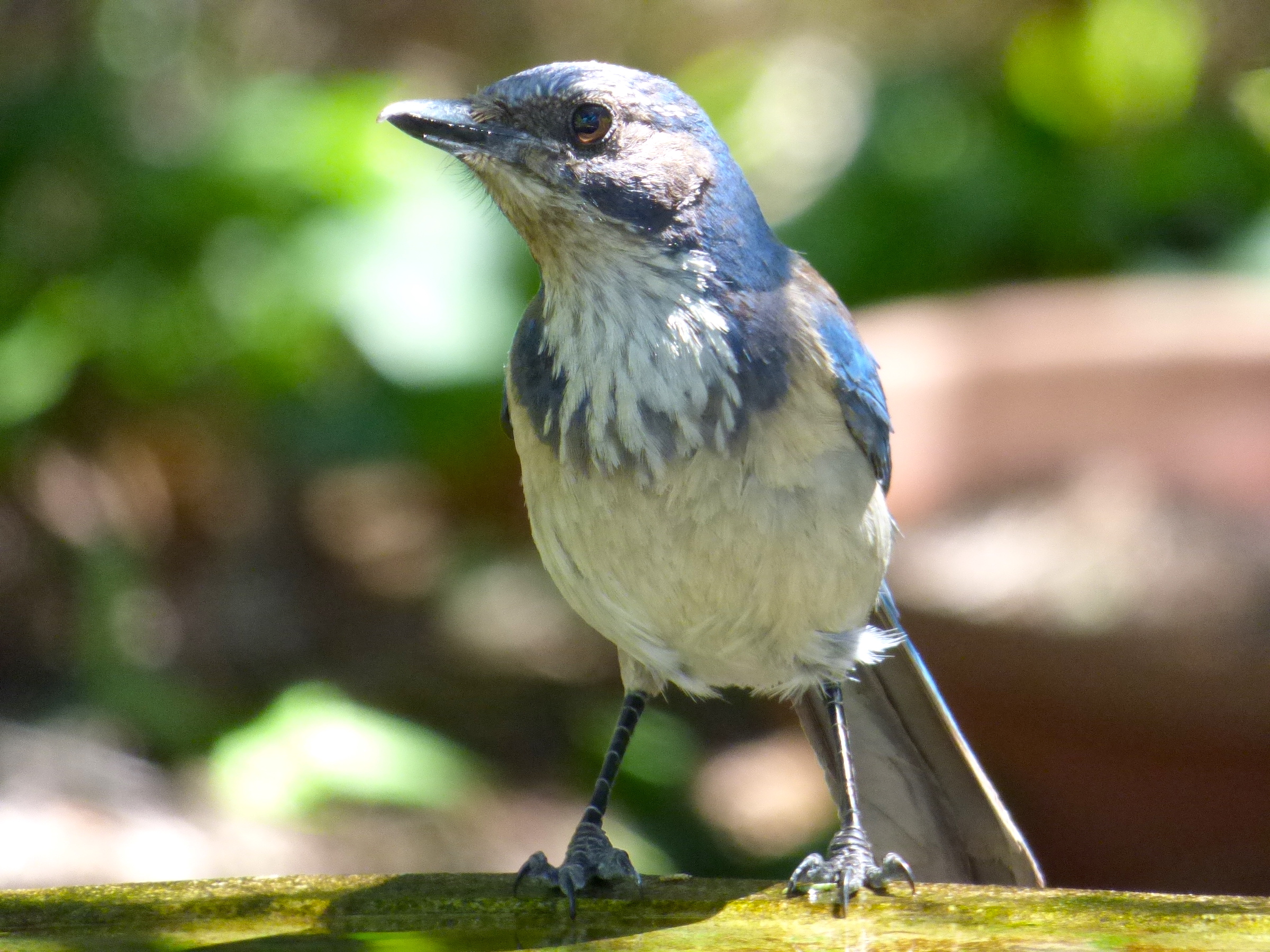 The California scrub jay is one of the most common birds in local gardens and in the chaparral. It’s a member of the crow family, which accounts for its intelligence and audacity. 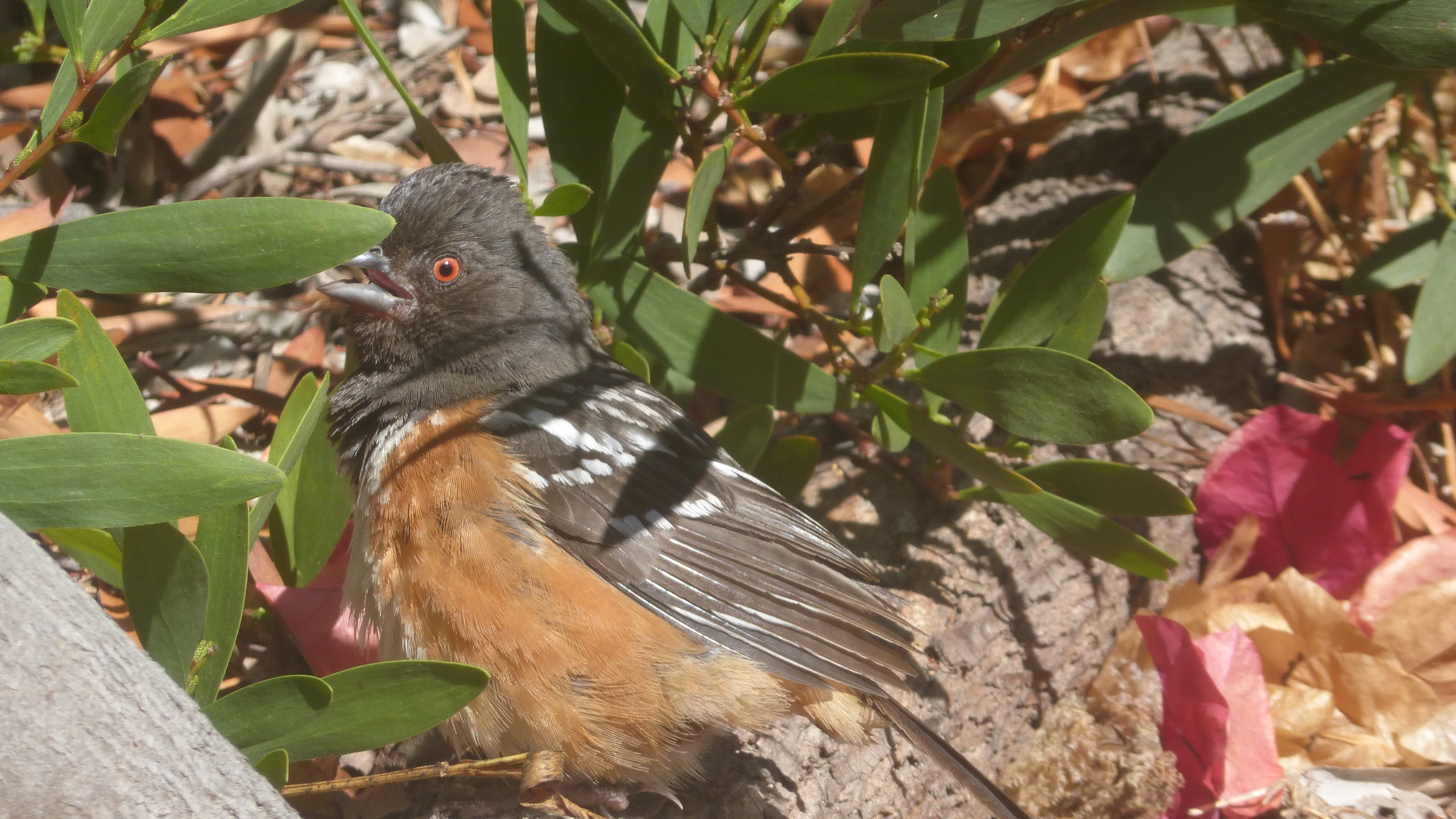 The spotted towhee has a bright red eye to compliment its red feathers. Both males and females have brightly colored feathers. 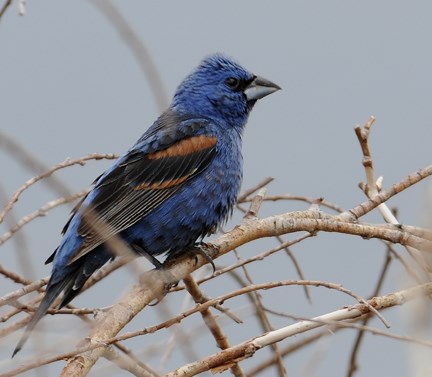 Blue grosbeak. This close relative of the lazuli bunting is more often heard than seen. Listen for the male’s warbling song in the treetops at Malibu Creek State Park this summer, but good luck spotting him! Photo by Sally King, courtesy of NPS.

No need for store-bought Fourth of July decorations in the Santa Monica Mountains, not with the dazzling array of red, white, and blue wild birds that make their home here.

Almost every garden in Topanga has a resident house finch with its bright red head, or a neighborhood red-tailed hawk. Canyon residents share their oak trees with acorn woodpeckers, a species with bright red feathers on their heads, and the leaf-litter below with spotted towhees (Pipilo maculatus), a fearless member of the sparrow family with a rusty red breast and ruby-red eyes.

The snow-white great egret can be spotted foraging for mice and lizards in mountain fields and along canyon roadsides almost as often as along the beach. It’s not exactly what comes to mind when one thinks “garden bird,” but that doesn’t stop it from showing up, especially if the garden has a fish pond. The other conspicuous white bird is the barn owl—its scientific name, Tylo alba, literally means “white owl,” and the new generation of Canyon barn owls have already fledged and are on the wing every night, pale as ghosts.

The blue grosbeak (Passerina caerulea), with its deep blue feathers, red-trimmed wings, and a conical beak that resembles a nutcracker, arrives from its winter feeding grounds in Mexico in the spring to breed in open oak woodland in the local mountains. Male and female jays and swallows have the same coloring, but only the male grosbeak is blue, the female is a sedate red-brown. The blue grosbeak is not a common bird, and it is more often heard warbling from the treetops than seen, but it is a successful one whose range and population appears to be increasing as it learns to adapt to urban life.

Blue-colored birds, especially swallows, are a traditional sign of good fortune in several cultures, appearing in Chinese, Russian, and Native American folktales. The idea of a “Bluebird of Happiness” seems to have originated in the folklore of the Lorraine region of France, and was popularized by Belgian symbolist writer Maurice Maeterlinck in his 1908 play L’Oiseau bleu.

The family of birds officially called bluebirds are three species of North American thrushes known by the genus name sialia. There are Eastern, Western, and Mountain bluebirds.

Sialia Mexicana, the Western bluebird, is the species found in the Santa Monica Mountains. The much-loved garden bird really is red, white and blue. The male has blue back wings and red breast with white feathers underneath. The female shares the same coloring but is much paler, closer to gray and pink than blue and red.

The local population of true bluebirds has fared better than more urban Southern California populations, because more of this species’ natural habitat is available. Western bluebirds need old-growth trees with natural cavities or abandoned woodpecker holes to nest in. Bluebirds came perilously close to extinction in the 20th century due to DDT exposure, habitat loss, and competition from non-native species like the house sparrow. Bluebirds are making a recovery, thanks in part, to passionate advocates who are providing a voice for the species and are seeking to reintroduce it to areas where these birds have been missing for decades.

Conservationists use networks of nest boxes, called “bluebird trails” to reintroduce the birds to areas where they had become locally extinct. This species is fearless around humans and is often happy to take advantage of a backyard nest box, the key to this conservation success.

The fate of this beautiful bird remains uncertain in many parts of its range, but in the local mountains it is a regular resident, one that, like this bird’s legendary counterpart, often brings happiness to those who see it.

There is another bird in the Santa Monica Mountains that is red, white and blue: the lazuli bunting (Passerina amoena), which has markings that are similar to the bluebird’s but with sky blue feathers, instead of royal blue. Lazuli buntings are a close relative of the blue grosbeak and have a similarly impressive beak.

Like their grosbeak cousins, the buntings population has  remained relatively stable over the last 50 years, even trending slightly upward, according to the International Union for Conservation of Nature’s Red List.

This is another bird that is more often heard singing than seen, but this year, lazuli buntings are more in evidence than usual in the Santa Monica Mountains. These blue birds really are an auspicious sign, because they thrive in chaparral habitat that has burned and is recovering. Their presence in the Woolsey Fire burn area is evidence of the restorative power of nature.

All of the birds mentioned in this article, even the shy ones that are rarely seen, can be found in local backyards and open space throughout Topanga and the Santa Monica Mountains.