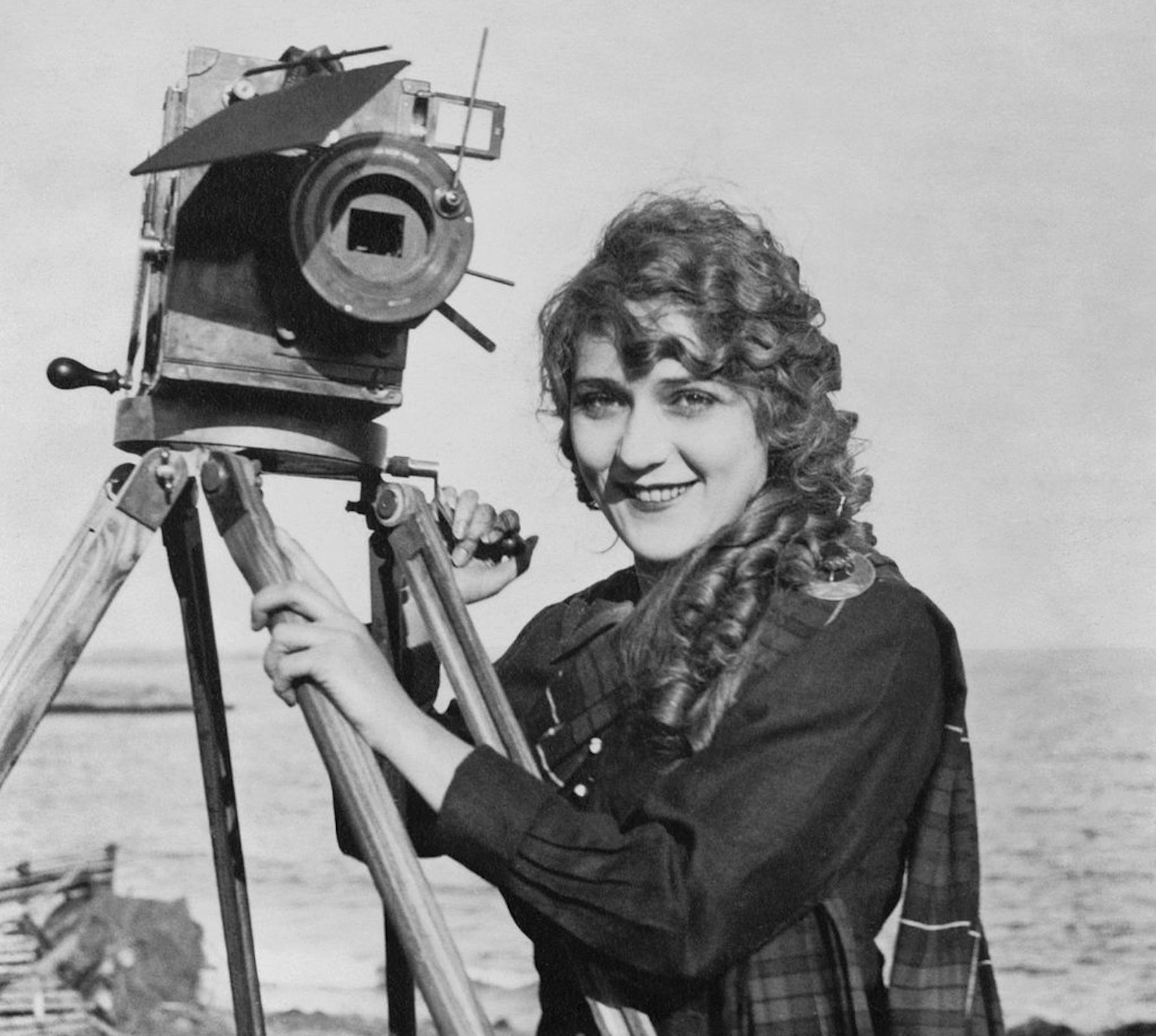 Mary Pickford, the Canadian-born actress who became “America’s Sweetheart” was a formidable businesswoman who overcame extreme poverty to become a Hollywood powerhouse in the silent era. She co-founded United Artists in 1919, with her future husband, actor Douglas Fairbanks, Charlie Chaplin, and D. W. Griffith. Photo: Library of Congress 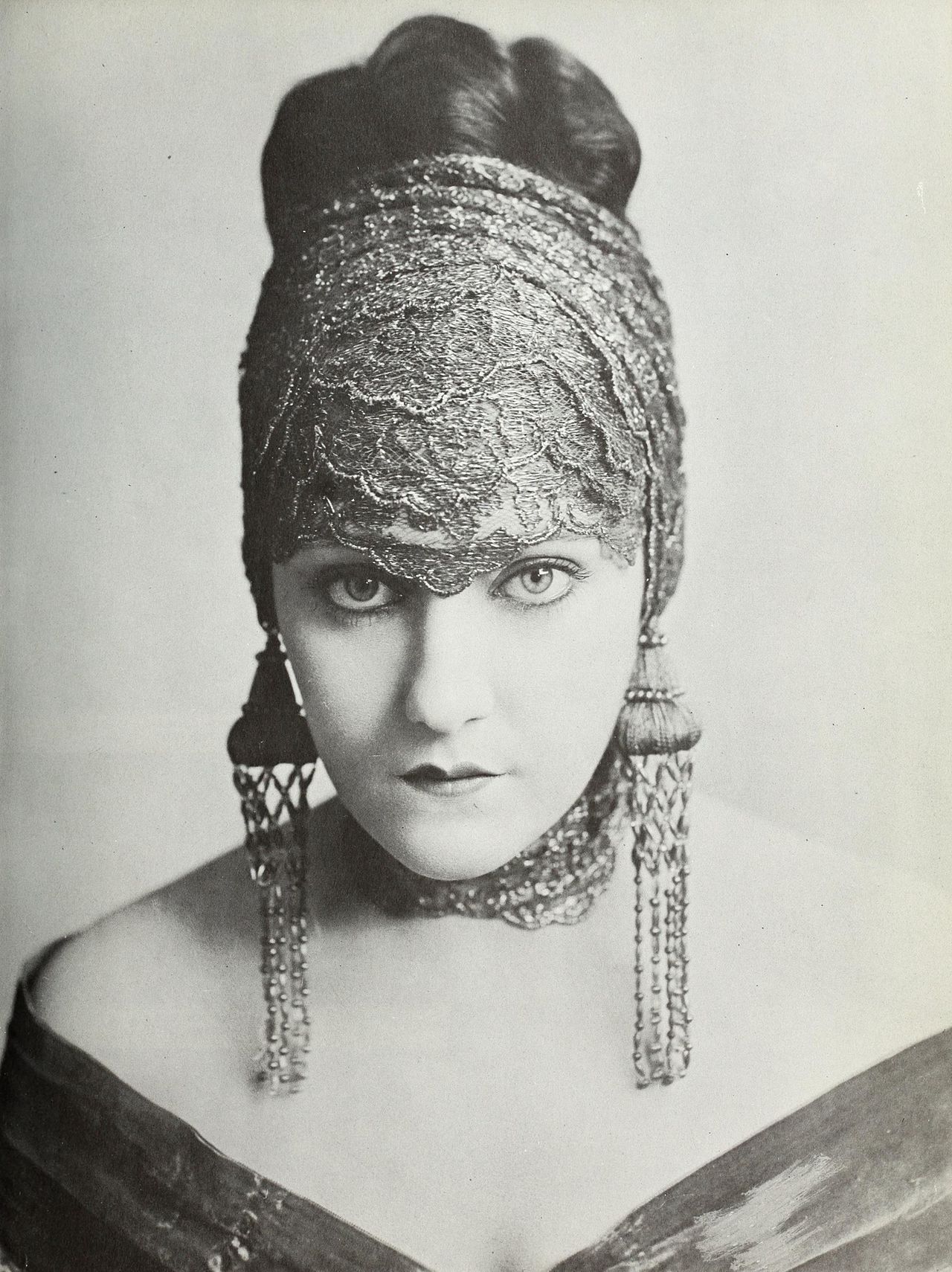 Gloria Swanson is considered to be the silent screen's most successful star. She began producing her own films as a way to ensure creative control over her own career. Photo: James Edward Abbe, 1922, courtesy of Wikimedia Commons 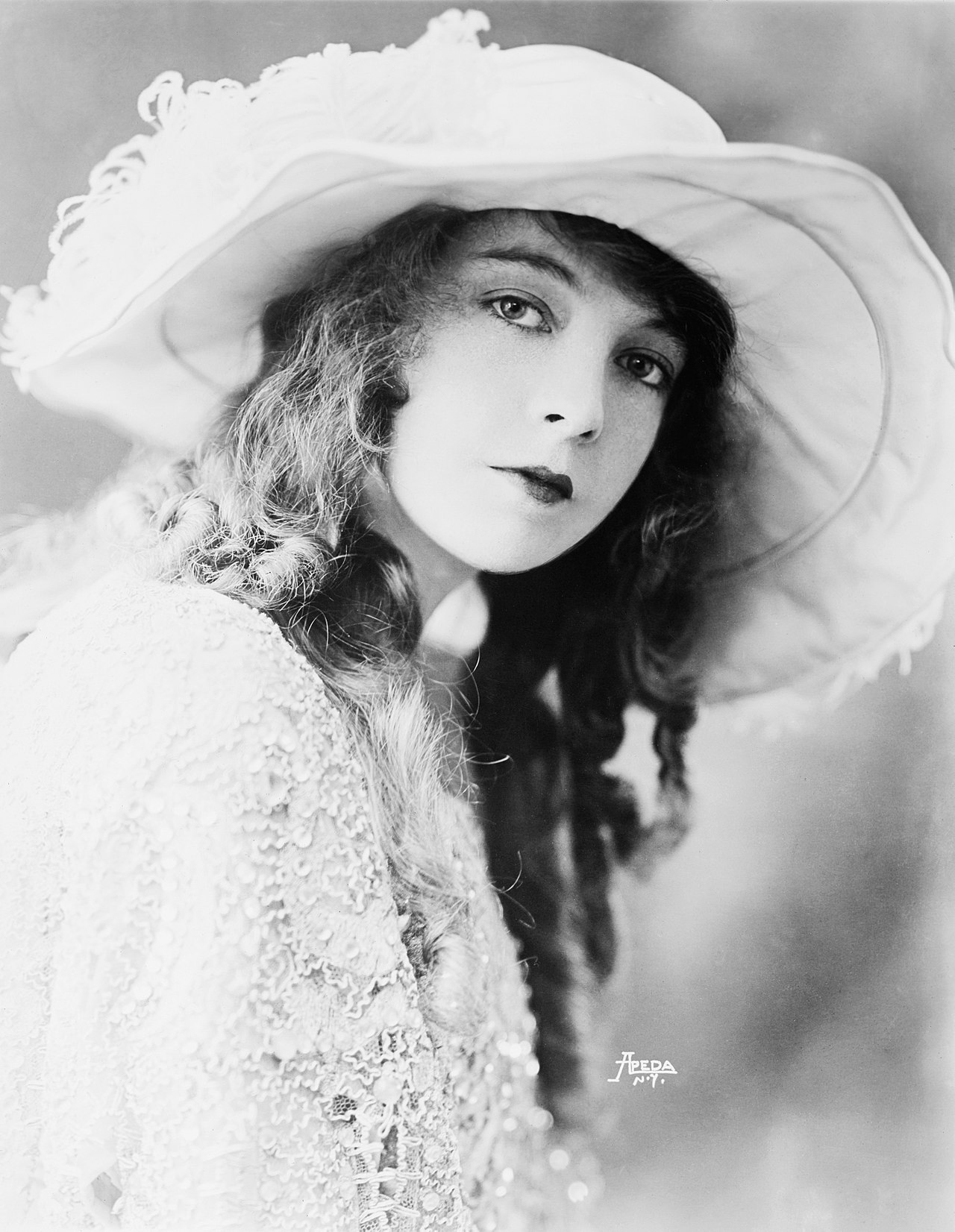 Lillian Gish, one of the greatest actresses of the silent era also made her own costumes, and did her own stunts. In 1920, she wrote and directed a feature film starring her sister Dorothy Gish. Remodeling Her Husband cost $58,000 and made $160,000. She was one of the rare silent era film stars who had a successful career in the sound era. She gave her first film performance in 1912, and her last in 1983 at the age of 93. Photo: Library of Congress 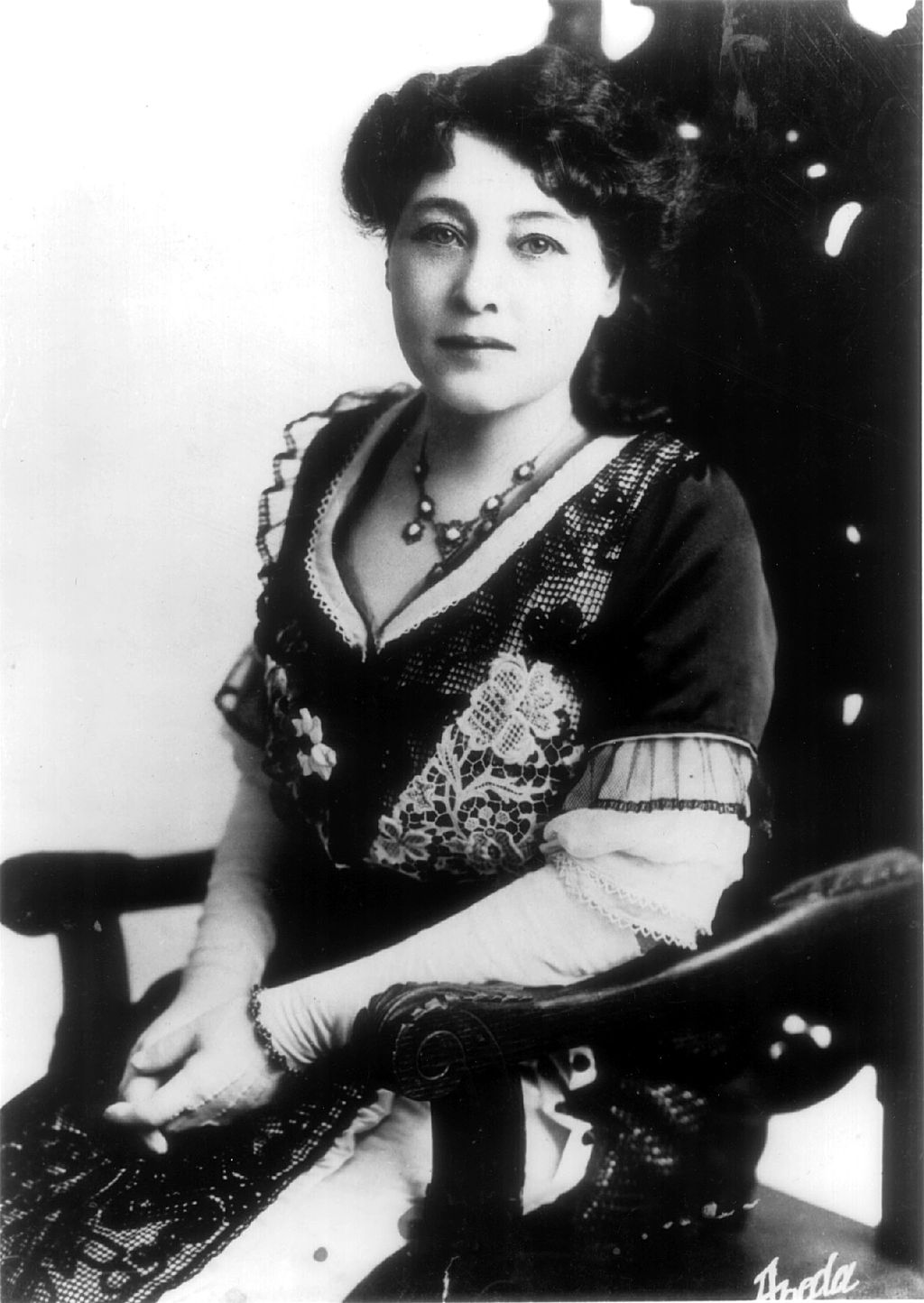 Alice Guy Blaché directed more than 600 films in the first days of the film industry and was the first woman to found her own production company. Photo circa 1912, from the Solax studio archive. 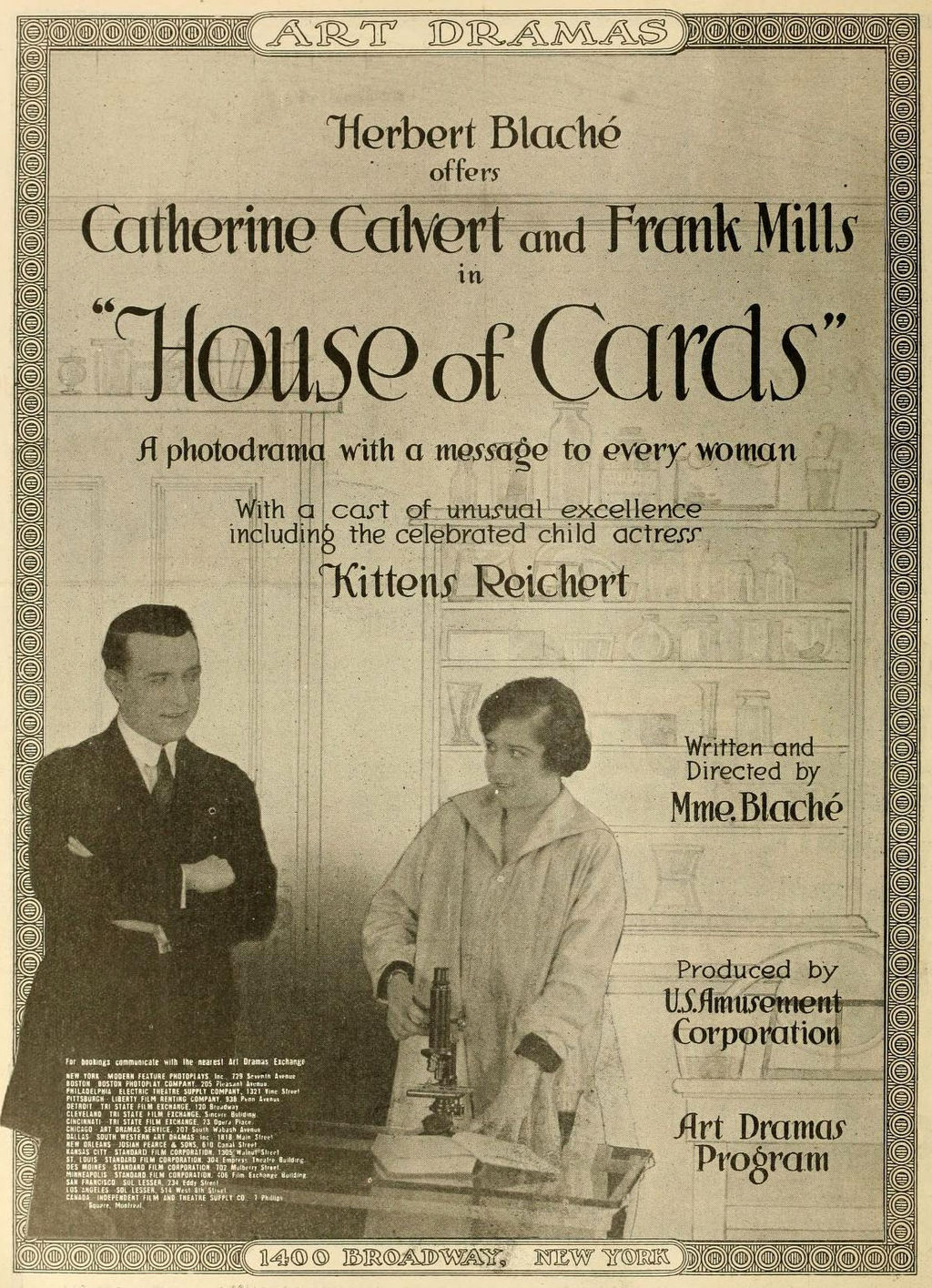 This ad for House of Cards, a 1917 drama directed by Alice Guy-Blaché, appeared in the magazine Moving Picture World. The film featured an interracial cast. Blaché is thought to have also directed the first film with an entirely African American cast, A Fool and His Money, released in 1912. Image courtesy of Wikimedia Commons 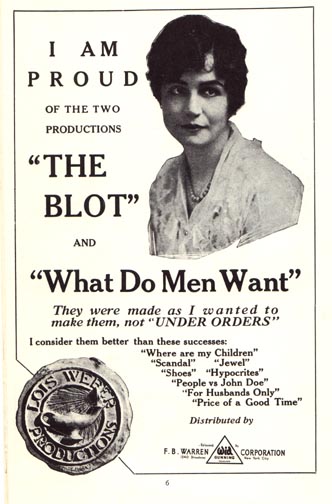 Lois Weber was an actress, screenwriter, director and one of the most prolific film producers of the 1920s. In this poster for two of her films, she advertises that she makes her films the way she wants to, not “under orders,” which is more than most filmmakers in the corporate climate of the current film industry today, can say for themselves. Image: Wid's Yearbook 1921-1922

The silent film era offered women a rare opportunity to forge a career in a new industry, and not just in front of the camera but behind it. Women were involved in many aspects of filmmaking from the beginning.

Pioneer woman filmmakers include Alice Guy Blaché, the first woman to become a  film director and to start her own motion picture studio. Blaché began her film career in the 1890s. She directed films for the Gaumont Film Company for 11 years, before starting Solax Studios in New Jersey in 1910, before the film industry traveled west to California.

Blaché is thought to have directed more than 600 films, and according to some researchers, possibly more than a thousand. She experimented with special effects, including early forms of color created by hand-tinting frames of film, and developed and refined silent film acting techniques. She also hired and encouraged other women filmmakers.

However, when her former employer published a history of the Gaumont Film Company in 1930, Blaché’s name and accomplishments weren’t in it. Her role in the evolution of film wasn’t rediscovered until the 1970s. Today, only 150 of her films survive.

Blaché received a posthumous Director’s Guild Award in 2011. At the ceremony, American film auteur Martin Scorsese said it was a tragedy that her contribution to film had been forgotten for so long.

Other high profile early pioneer filmmakers include Ruth Ann Baldwin,, a journalist, screenwriter and director active in the 1910s; and silent film actress, screenwriter, producer, and director Lois Weber, described by film historian Anthony Slide as, “Along with D. W. Griffith, Weber was the American cinema’s first genuine auteur, a filmmaker involved in all aspects of production and one who utilized the motion picture to put across her own ideas and philosophies.”

The second wave of silent era women power-players included some of the most famous actresses of the era. Mary Pickford, one of Hollywood’s first stars to be billed under her own name, and one of the co-founders of the production company United Artists is high on the list. So is Lillian Gish, an actress who pioneered film acting technique and also tried her hand at directing and producing; and Gloria Swanson, the highest paid star of the silent era, who used her clout in Hollywood to produce her own films.

In her book Backward in High Heels: Past Present and Future of Women Working in Film, author Alicia Malone suggests that as film evolved from a curiosity into a storytelling medium, the studios identified middle-class women as an ideal target audience and hired female writers and directors.

The same success that led to the creation of a flourishing film industry ultimately pushed women out, as studios consolidated from hundreds of smaller production companies to a handful of monolithic studios helmed by male moguls during the early years of sound.

“From 1930 onward, Hollywood became a boys’ club,” Malone writes. “Women have been trying to make their way back into the industry for almost 100 years.”

Malone points out that between 1912 and 1919, Universal had 11 female directors who made 170 films, compared to the period between the mid-20s through 1982, when the studio didn’t hire a single female filmmaker.

“The beginning of cinema—especially the silent era—offered more opportunities to women than we have seen since,” Malone writes. “So what happened?’

Film historian Jane M. Gaines attempts to answer that question in Pink-Slipped: What Happened to the Women in the Silent Film Industries?

Gaines isn’t convinced that the answer can be boiled down to the “corporatization of entertainment.” She cautions that so much of the historical record of women in film has been lost that it is nearly impossible to answer the question of what happened.

“Try though we might to dispassionately explain their times, we still speak of them through our moment,” she writes.

Gaines, however, is committed to piecing together as much of the history of women in film as she can. She’s the guiding force behind Columbia University’s Women Film Pioneers Project (WFPP), a digital publication and archive that has become a key repository, publishing and archiving scholarship on women directors, producers, screenwriters, editors, and more. As of January 2020, the site includes profiles of 284 women throughout the world and in almost every type of film-related profession imaginable.

This is a constantly evolving field of study, as new materials come to light worldwide and perspectives continue to shift. The vast majority of films made during the silent era have not survived. Piecing together the history of Hollywood’s first act is challenging, and many early contributors, male and female, have been forgotten. However, since film became a serious field of study missing pieces of the puzzle continue to be unearthed, revealing many new aspects of the history of women in film.

One of the focuses of WFPP is a list of 646 “unhistoricized” women film pioneers, whose life stories and film industry accomplishments have not yet been researched.

One of these is screenwriter Madeleine Ruthven, who is best known in the local community for having published a slim chapbook of poetry about the Santa Monica Mountains in 1934.

Madeleine Bunch Ruthven was born in Iowa in 1894 and grew up in Texas. She began her career as a writer as working as a journalist for the Houston Press. Sometime during the early 1920s she moved to Hollywood, where she landed a job writing title cards for silent movies, and then moved on to story treatments and finally to screenplays. From 1923 to 1936 she worked on 16 film projects in almost every genre, from romance to crime thrillers and Westerns.

Ruthven successfully transitioned from the silent era to the talkies, but her filmography ends in 1936. When she appeared before the House UnAmerican Committee in 1951, accused of being a communist, she was described as an “ex writer.”

“Hollywood hasn’t always been a boys’ club,” Malone writes in Backwards in High Heels. “It certainly doesn’t need to remain one.”

Malone took the name of her book from a famous quip about Ginger Rogers, who “did everything that her partner Fred Astaire did, but ‘backwards and in high heels.’” While there are more women filmmakers in 2020 than at any time since the advent of talking pictures, we still haven’t caught up to the level of opportunity available to women in the 1920s.

For information on the Women Film Pioneers Project, visit https://wfpp.columbia.edu

Theater of the Mind 2: The Psychotherapist as Performing Artist