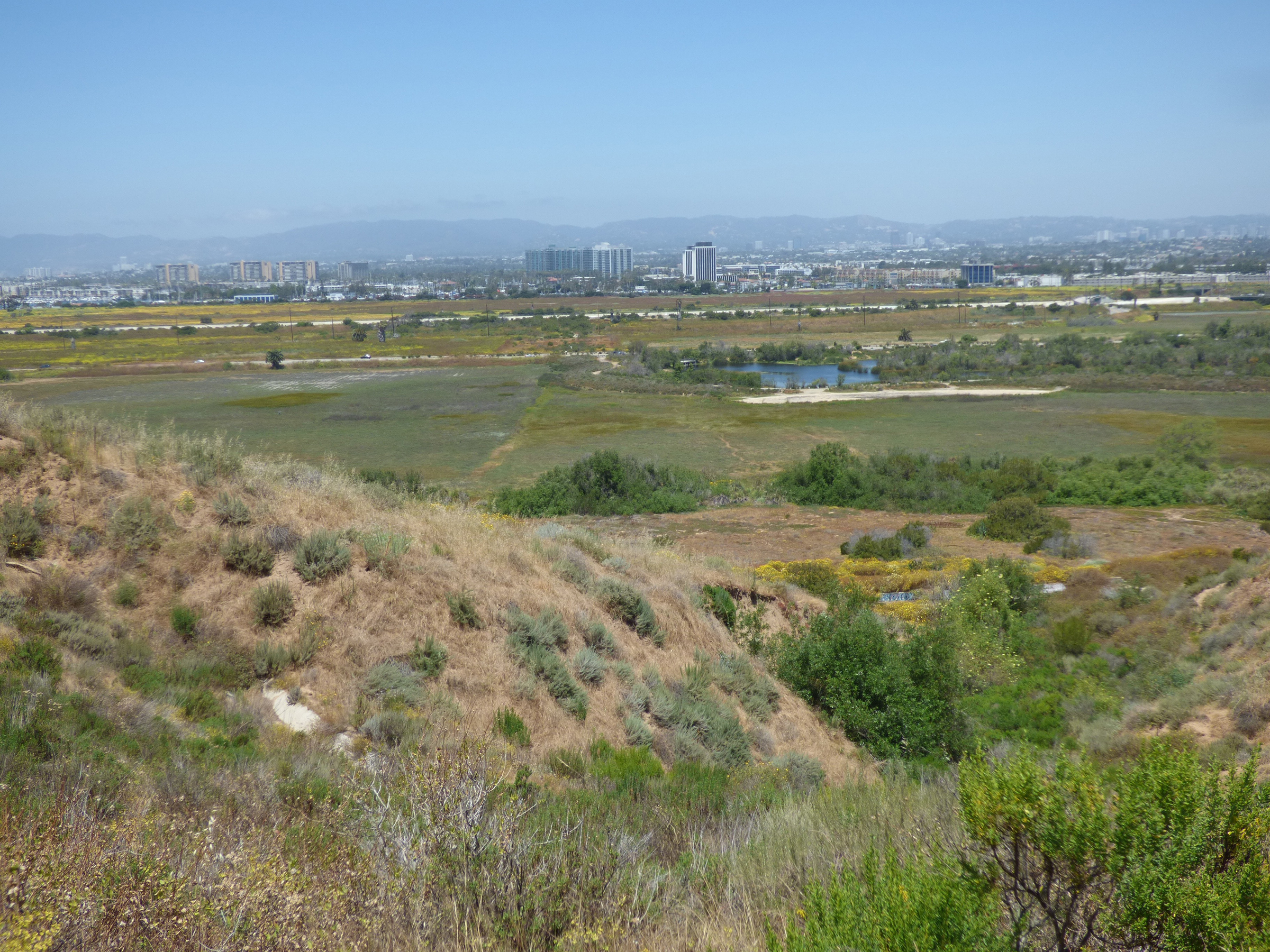 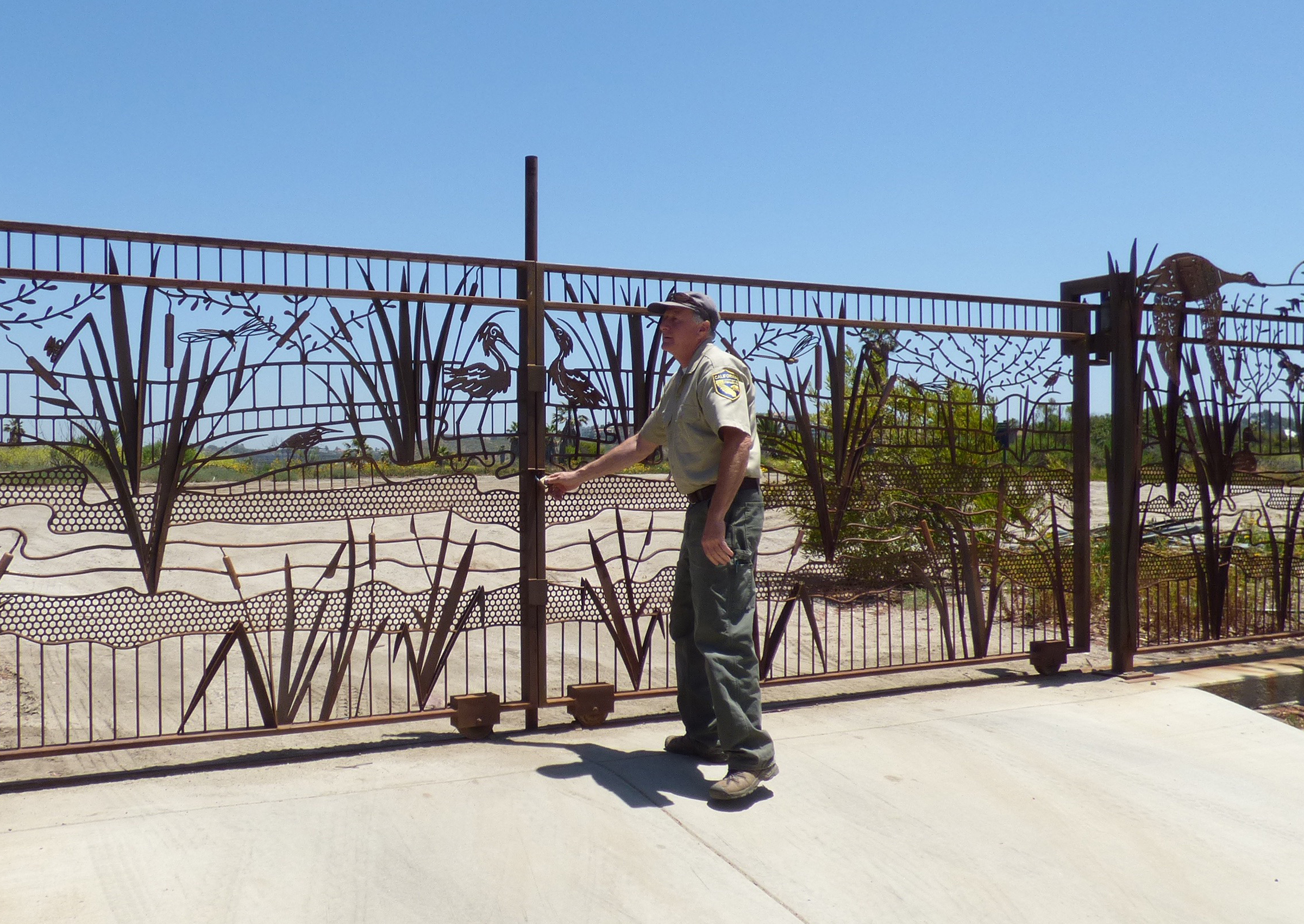 Brody opening the wrought iron gates to the reserve created by the artist Lt. Mustardseed 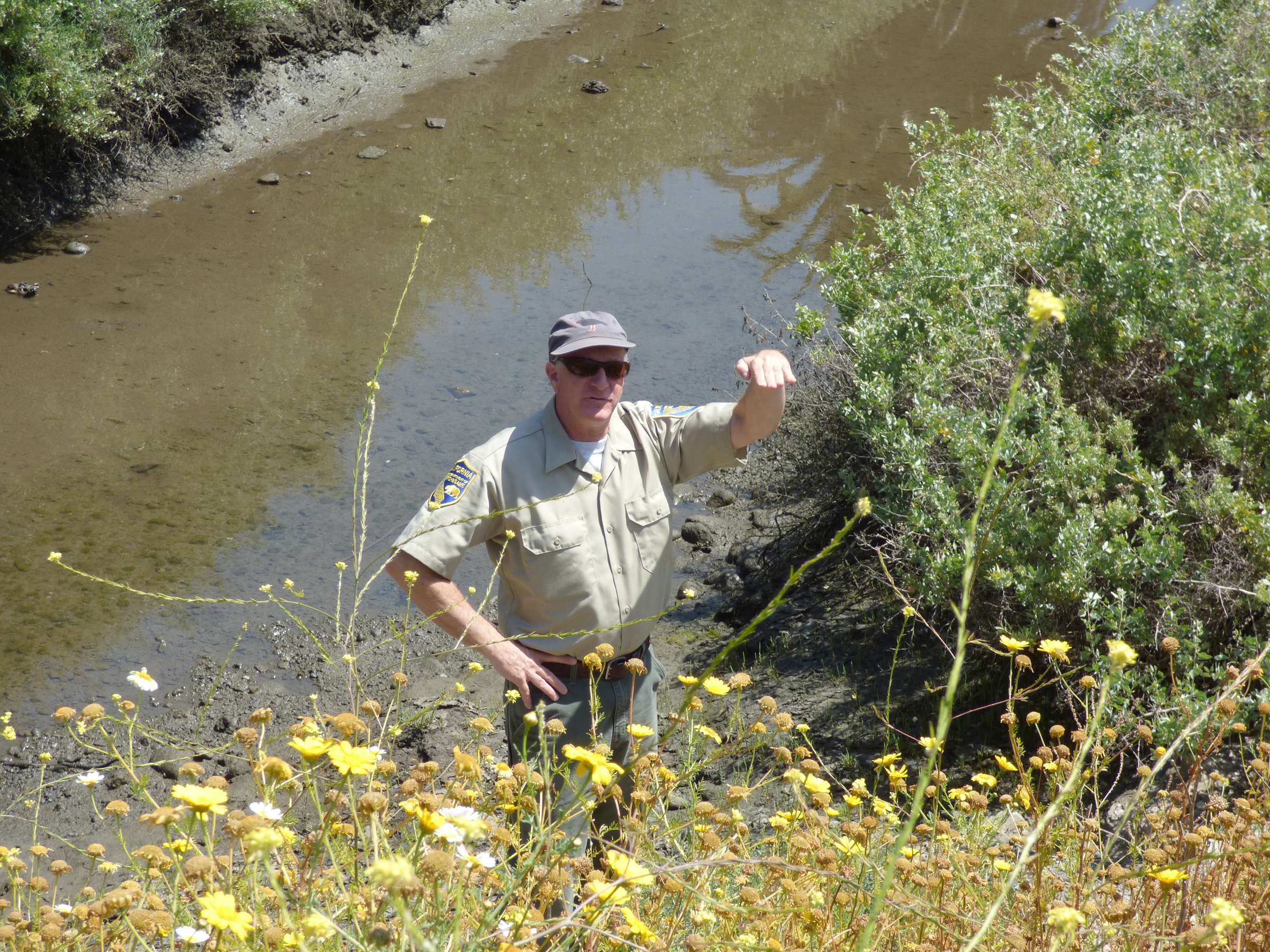 Richard Brody showing the 20 feet of fill that must be removed to restore the wetlands. 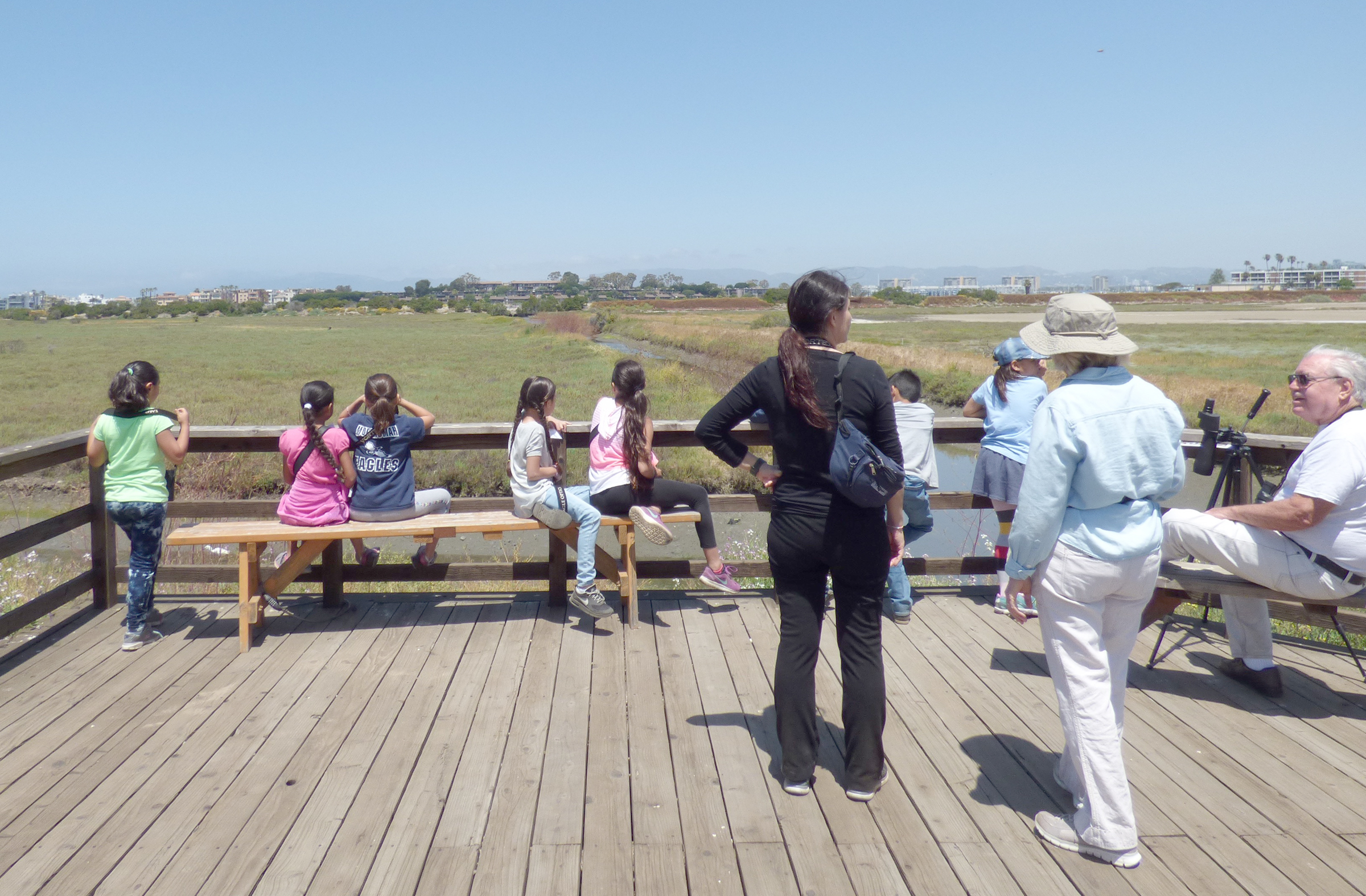 School children from East L.A. visiting the salt marsh with docents from the Friends of Ballona. 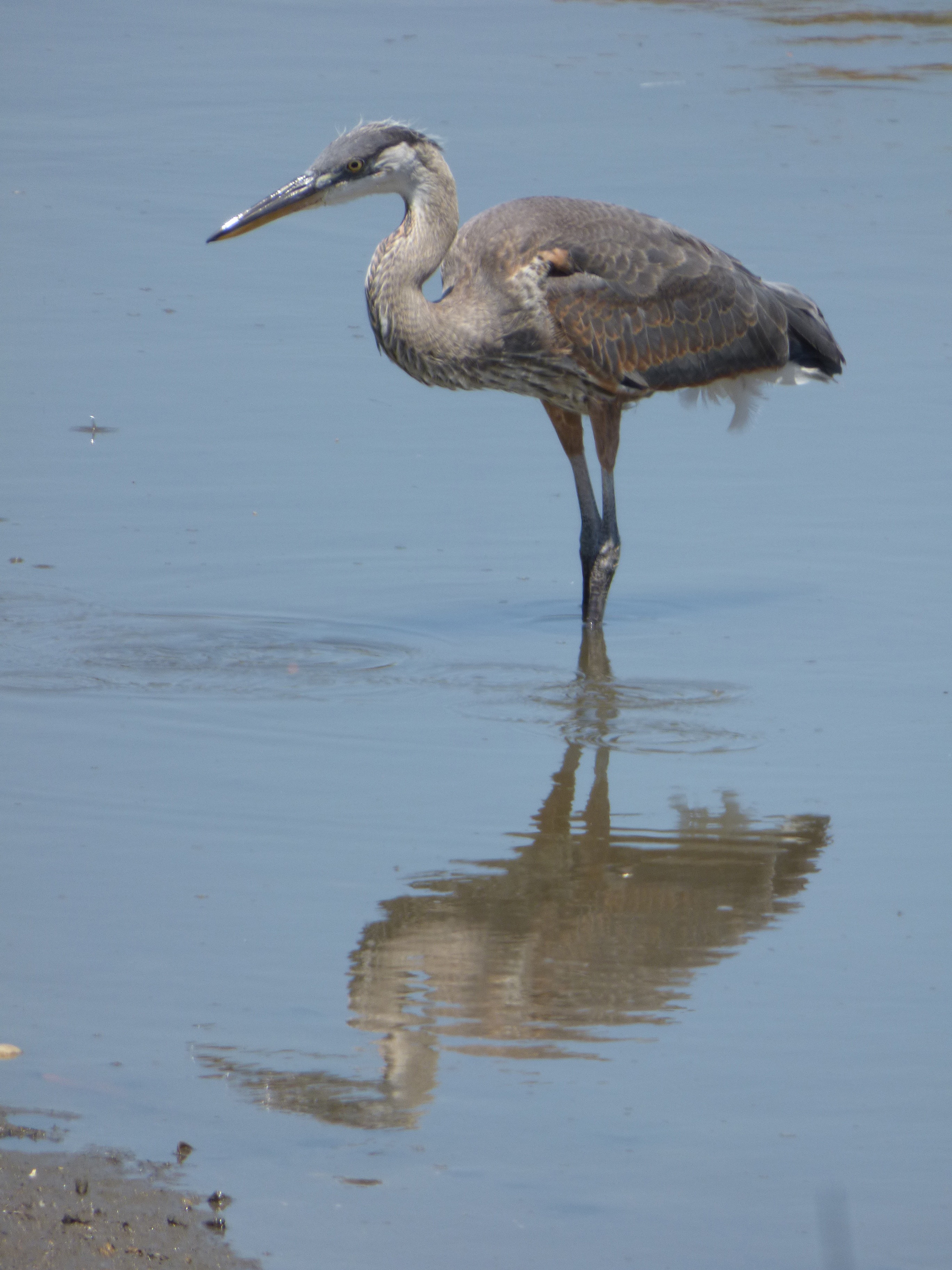 A juvenile great blue heron in the channel. 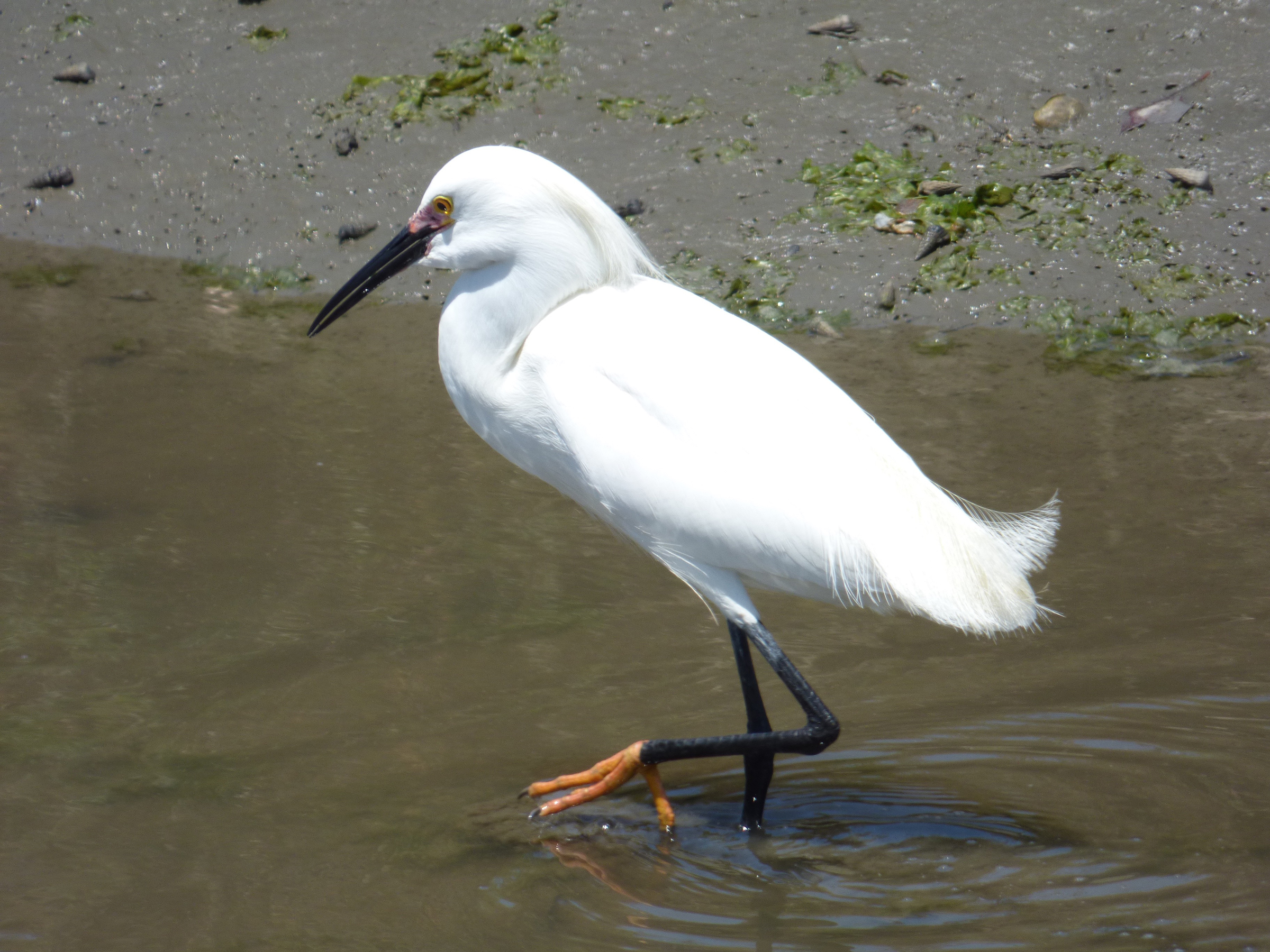 Despite decades of environmental degradation, the Ballona Wetlands isn’t a bleak industrial wasteland.

When Topanga resident Richard Brody goes to work each morning, he isn’t headed for an office. Instead, he spends his days overseeing the last significant remnant of Los Angeles’ once-thriving wetlands.

Brody is the California Fish and Wildlife senior ecologist responsible for managing the Ballona Wetlands Ecological Reserve: 577 acres of open space sandwiched between Marina Del Rey and Playa Vista, the last remnant of a once vast expanse of wetlands, marshes and tidal estuaries that were filled in as the City of Los Angeles expanded.

Much of the Ballona Reserve was filled in with soil excavated during the construction of the marina in the 1960s. Roads and oil industry pipelines criss-cross the open space. Ballona Creek flows to the sea confined to a 20-foot-deep concrete canal.

Despite decades of environmental degradation, this isn’t a bleak industrial wasteland.  Invasive species like mustard and crown daisies may have replaced cattails and reeds, but the open space is home to many species of birds and animals, including the increasingly rare burrowing owl, great blue herons and snowy egrets, the federally listed least tern, and the tiny Belding’s Savannah sparrow, a California species of special concern.

Brody explained that the unpredictable flooding and tidal flow interfered with development plans. “They said enough is enough and channelized the creek in the 1930s, just like the L.A. River,” he explained. That channelization disconnected the creek from the floodplain, creating a dry upland where there had been a thriving wetlands ecosystem.”

An ambitious, multi-phase plan to remove the fill, reconnect the creek, and restore the wetland has encountered numerous obstacles, but is reportedly moving forward again. Brody said he’s optimistic that the Environmental Impact Report (EIR) for the project will be ready by mid-summer.

The project is three years behind schedule. It’s a complex process that involves state and federal environmental review. “The Army Corps of Engineers is the lead agency,” Brody said.

One of the major concerns is how to remove enough of the fill dumped in the wetland during the creation of Marina Del Rey to enable the wetland to return while still retaining levies for flood control. The roads and other infrastructure bisecting the wetlands further complicate the restoration discussion.

The project has to balance a host of critical concerns ranging from wildlife connectivity and flood control, to oil industry infrastructure and public access.

“This is the holy grail of restoration,” Brody said. “We want to get it right. We’re a lot better at it now,” he added, acknowledging that early wetlands restoration projects have not always worked the way they were intended. “We’ve all learned from experience,” he said. “Each restoration in different. Each wetland is a living organism, an individual.”

Brody acknowledged that some species will be impacted during the construction process.

“Common species will be displaced, but it’s a chance to make space for species clinging to survival, like the savannah sparrow and the clapper rail,” he said. “California has lost 95 percent of its wetlands. In Los Angeles County, we’ve lost 98 percent. Restoring this wetland is more complicated than just adding water.”

Brody said that he is committed to a hands-on management approach. His work includes keeping a close watch on all aspects of the land in his care. It’s a major undertaking. Two areas have been restored. The Ballona Freshwater marsh that was part of the development agreement for Playa Vista, and an area of tidal marsh overseen by the non-profit volunteer organization, Friends of Ballona, but most of the acreage is a kind of urban wilderness that makes policing the area is a challenge.

Homeless encampments and drug issues remain a major concern. A water carbine (carboy?) in Brody’s office is filled with hypodermic needles collected in the wetlands. Illegal dumping is another problem. Brody says that he’s overseen the removal of 60 tons of trash. He has also shut down reptile poaching. “People put plywood out to attract snakes and lizards, then collect them,” he said. “We watch for that.”

It’s impossible to keep an eye on everything, but as we toured the site, Brody intercepted a college professor illegally taking invertebrate samples. “We encourage research but this guy didn’t ask first. Several universities are our partners, they work with us, they don’t just go and dig stuff up.” He also removed some discarded underwear. “We have school kids visiting this area all the time,” he said. “They’re here to see birds, not bras.”

Brody explained that he has enlisted members of the communities surrounding the reserve to report suspicious activity.

“We’re working to be better neighbors,” he said.

Brody said he understands that the restoration will disturb the existing landscape, but that the ultimate goal is to bring back a much more vibrant and ecologically diverse habitat. The reserve currently has three documented threatened or endangered species, and 13 California special concern species. Brody indicated that the restored habitat could potentially host more than 100.

“I feel very comfortable stating that Ballona has the potential,” he told MMN. “It’s still beautiful. People tell me all the time that just driving through the wetlands on their way home from work makes them feel peaceful, but it could be so much more than it is now. Imagine a healthy wetlands with thousands of birds. It was like that once, it could be that way again.

It’s a once in a lifetime opportunity.”

The Science and Spirit of the Ocean