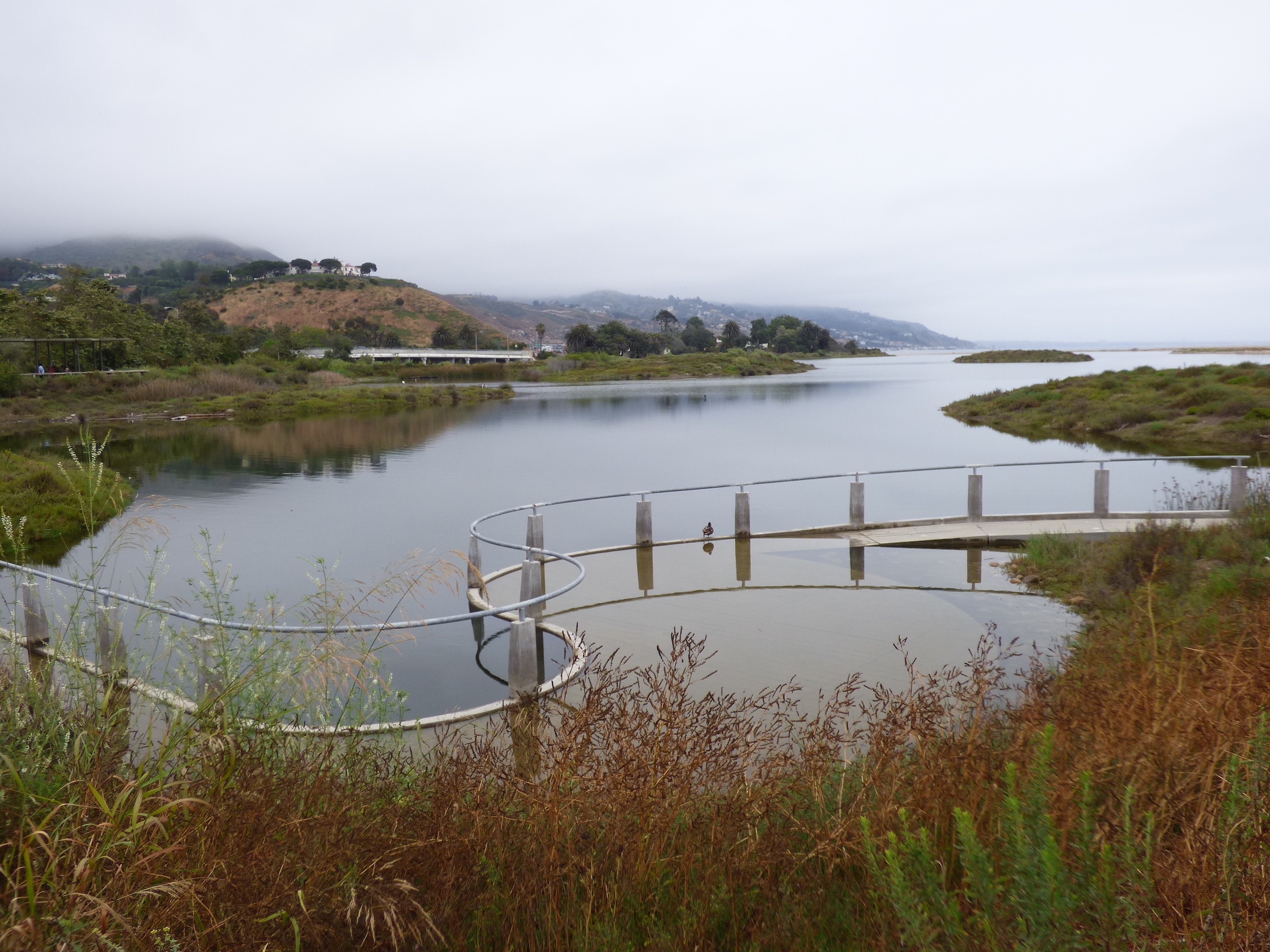 Melting ice sheets in Antarctica have the potential to impact California with greater sea-level rise than the world average. The only practical solution may ultimately be a “managed retreat.” from the shoreline. This walkway at Malibu Lagoon State Park is designed to flood when the tide is high or the sandbar has closed off the lagoon, raising the water level in the wetland, but it’s also a reminder that wetlands and beaches are vulnerable to sea level rise, and that the day is coming when sea level will be high enough to make this level of flooding permanent. Photos by Suzanne Guldimann 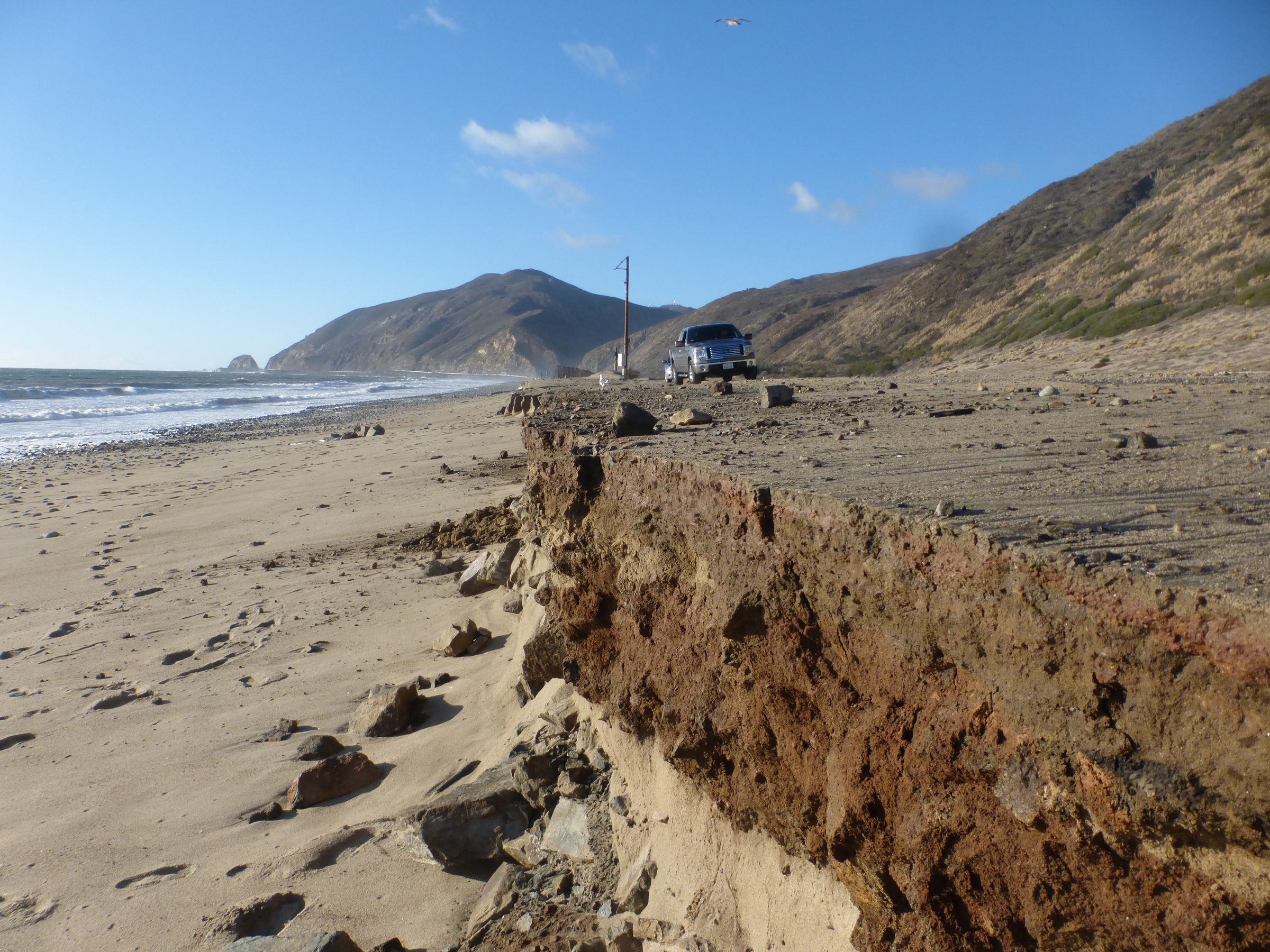 Thornhill Broome Beach was slammed by Hurricane Marie in 2014 and has never fully recovered. Caltrans worked to shore up PCH where it was undermined by powerful stormdriven surf, but much of the sand was washed away and has not returned, leaving a steep dropoff, where just a few years ago one could walk right onto the beach from the road. 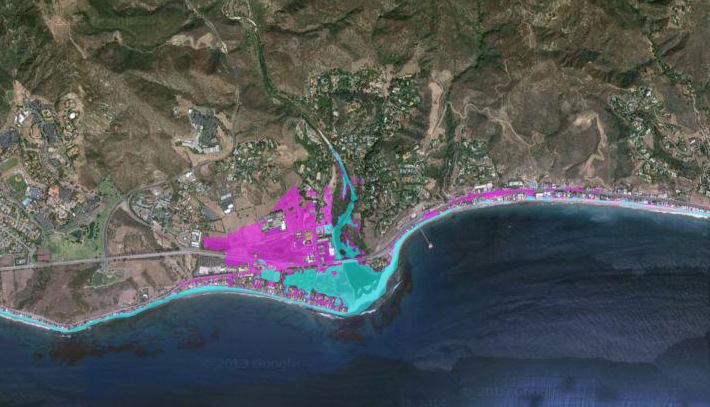 The City of Malibu is currently grappling with what could be a soggy future. This FEMA flood map shows the Malibu Civic Center and surrounding stretches of PCH under water or at high risk from major flooding. Malibu City Councilmember Skylar Peak is calling for the city council to declare a local state of emergency to focus attention and resources on the dual threats the city faces from climate change: sea level rise and increased wildfire risk.

Melting ice sheets in Antarctica have the potential to impact California with greater sea-level rise than the world average. The only practical solution may ultimately be a “managed retreat.” from the shoreline.

Madame de Pompadour, patron of the arts and mistress to King Louis XIV, is said to have famously quipped, “après nous le déluge”— “after us, the deluge.” The 21st century may not have to wait for the waters to rise. California’s coastal communities are already grappling with the impact of climate change on sea level.

In 2015, the California Coastal Commission (CCC) adopted its official “Sea Level Rise Policy Guidance,” a document that provides an overview of the best available science on sea-level rise for California and potential ways to address the issue during the coastal planning process.

It wasn’t intended to be a static publication.

Last year, the Coastal Commission unanimously adopted a science update reflecting recent scientific studies. The process of learning and adapting continues, but the only practical solution may ultimately be a retreat from the shoreline, and that’s an almost insurmountable challenge for seaside communities up and down the coast, especially for areas like the Malibu coast, where Pacific Coast Highway is increasingly at risk.

The 2018 update was based on research by the California Ocean Protection Council Science Advisory Team. The report found that melting ice sheets in Antarctica have the potential to impact California with greater sea-level rise than the world average, putting the state’s beaches, important infrastructure, a sizable portion of the population—and some of the priciest real estate on Earth—at risk.

Sea level along the California coast is as much as six inches higher today than it was in 1950, data collected by NOAA reveals. It is anticipated to rise by another six inches over the next 15 or so years due to ice melt and a phenomenon called thermal expansion—caused by rising ocean temperatures which cause seawater to expand as it warms.

Six inches may not sound like much, but the rise in sea level combined with astronomical high tides, storm swell or big surf events magnifies the impact and intensifies the potential for lasting damage.

The current predictions indicate that for every foot of ice that melts in western Antarctica, California’s sea level could rise by as much as a foot and a half. The worst-case scenario is catastrophic. The 2018 report cautioned that if nothing is done to slow climate change, sea level rise on the California coast could rise by as much as 10 feet by the end of the 21st century. The original prediction was a maximum of six feet.

Even without the threat of climate change, the California coast is a dynamic and unstable environment. Big winter storms and astronomical high tides have always had the potential to flood PCH and wash away beach development.

In 2014, Hurricane Marie brought 15-foot waves that caused nearly $20 million in damage. PCH was undermined by the wave action near Thornhill Broome Beach and just west of Topanga at Las Tunas Beach. Caltrans rushed to shore up the road with boulders and prevent infrastructure like Malibu’s waterline from collapsing into the ocean.

All the science currently points to a future where the natural process of beach erosion continues to speed up and becomes more extreme: cliffs will crumble, beaches, houses, and roads will wash away.

A study published in 2018 based on 25 years of NASA and European satellite data found that global sea level rise “is accelerating incrementally over time rather than increasing at a steady rate, as previously thought.”

The state’s budget of $6 billion to shore up coast infrastructure, includes seawall improvements, flood mitigation for major roads, and wetland restoration and fortification. In many areas, that might not be enough, leaving state and local officials to grapple with what the CCC calls “managed retreat.”

It’s not a popular concept and the pushback from property owners and local governments unwilling to enter the argument over eminent domain has derailed the discussion in many communities.

The City of Del Mar, a San Diego County beach town with a population of less than 5000, has developed a sea level rise adaptive plan that relies on sand replenishment to stem the tide. Malibu, which has 21 miles of coastline and some of the most vulnerable stretches of PCH in Southern California, is currently in the process of selecting a consultant firm to help develop sea-level rise analysis for the city.

It’s a process that is going on up and down the coast—Southern California alone has thirty-nine coastal zone municipalities, as local governments wrestle with public access, private property laws, sand replenishment, sea walls, and whether there are ways to encourage property owners to retreat without triggering concerns over government takings, i.e., “eminent domain.” None of the potential fixes are perfect; most would come with high costs.

Efforts to develop solutions and even to continue processing data are currently being hampered by a presidential administration that does not believe in climate change and is stripping funding for federal climate change research, a key tool for coastal states grappling with the issue of sea-level rise.

On August 26, Malibu City Council Member Skylar Peak called on the Malibu City Council to declare a local state of emergency over climate change and its impact on wildfire risk and sea level rise. Peak stated that in the absence of federal leadership it is up to every state, every city, every citizen to combat climate change, and that only mobilization on a scale not seen since WW II will bring real change.

There are no easy answers, and climatologists continue to warn that the flood is coming.  Après nous le déluge.