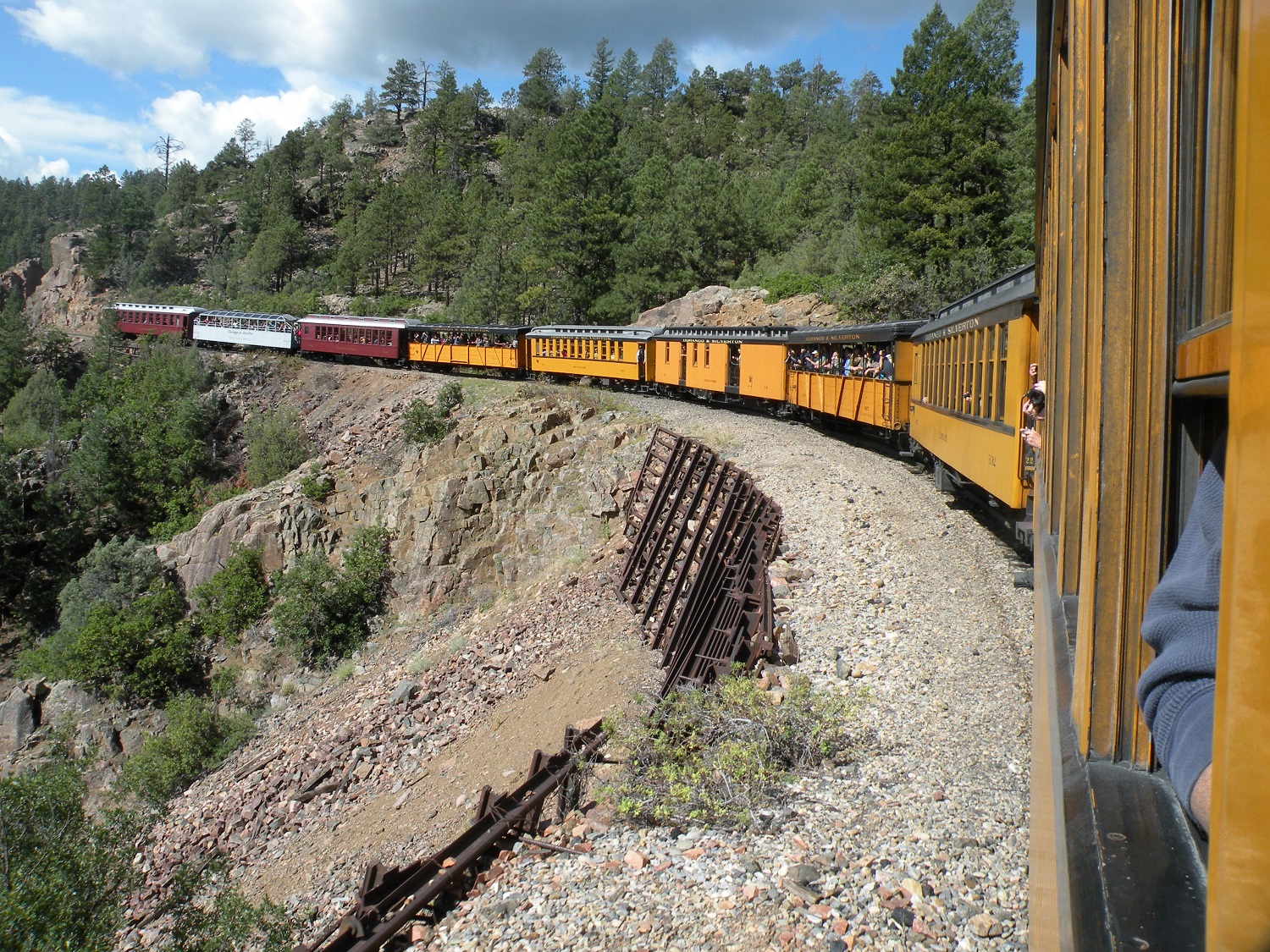 The Durango-Silverton narrow-gauge railroad used to haul silver and gold ore from Silverton to Durango. 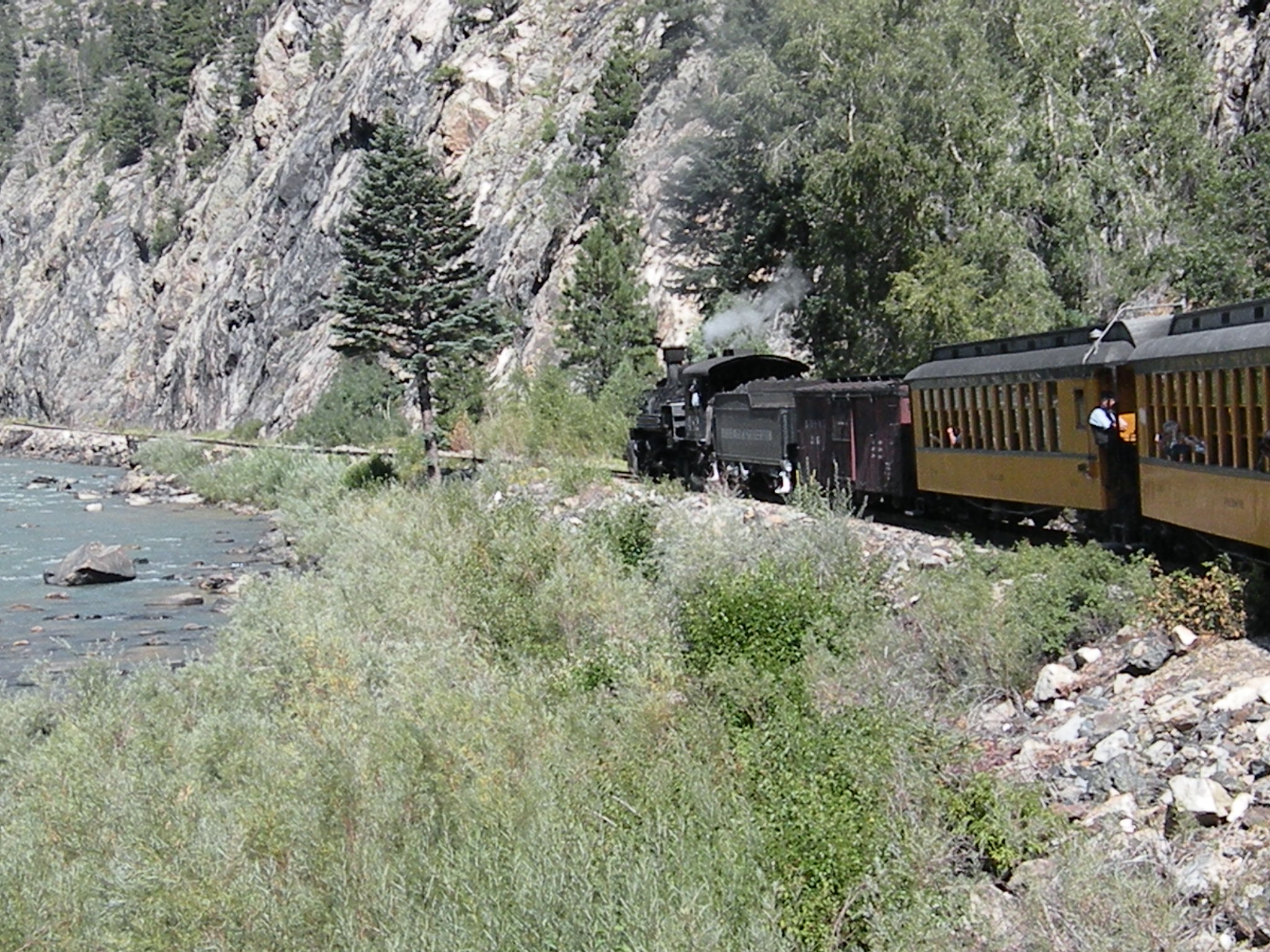 At 18 miles an hour, this relic of the American West chugs up rugged mountains and through Alpine forests between Durango and the former mining town of Silverton, a 45- mile round-trip journey that takes all day. Photo by Linda Ballou 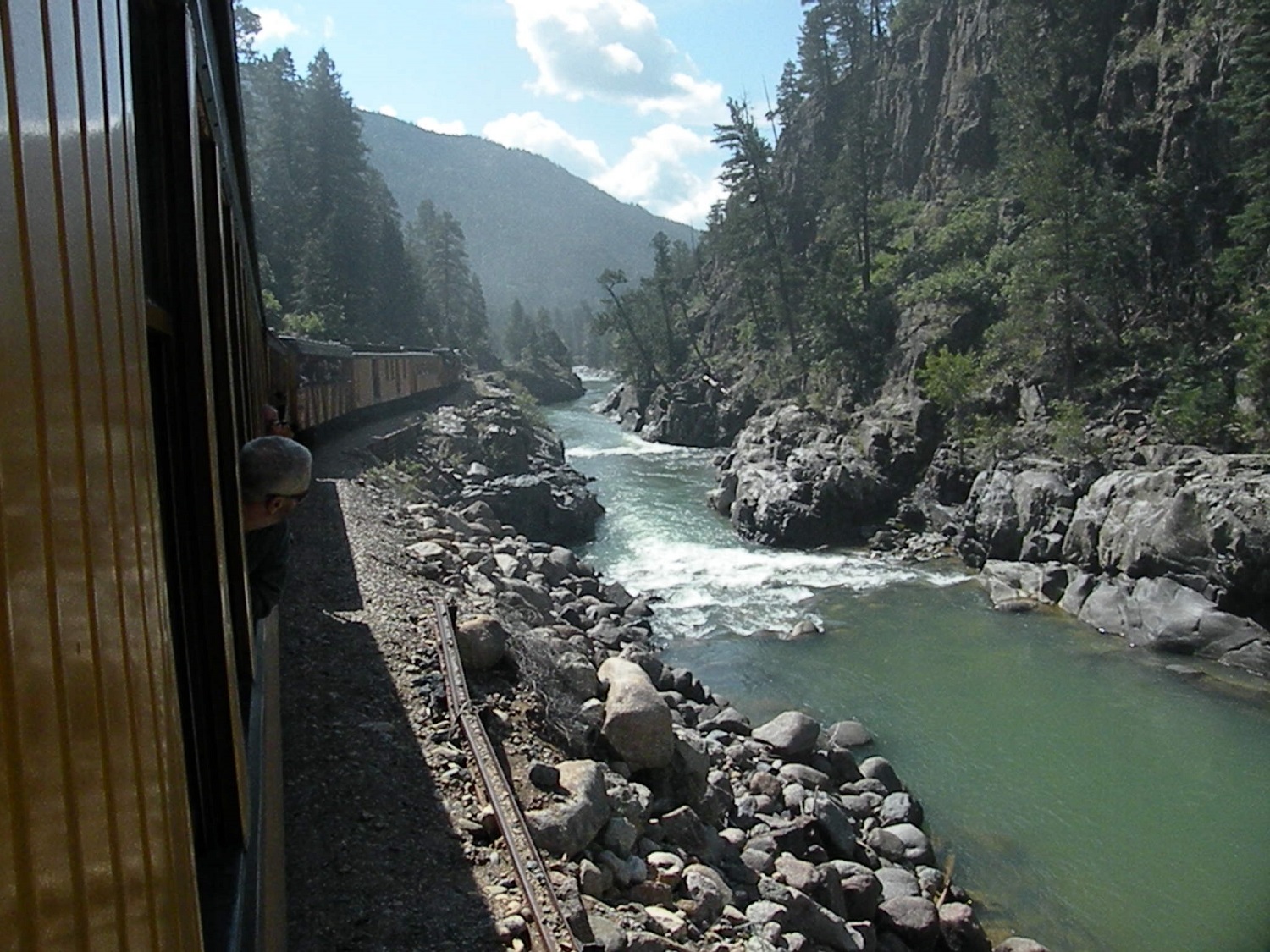 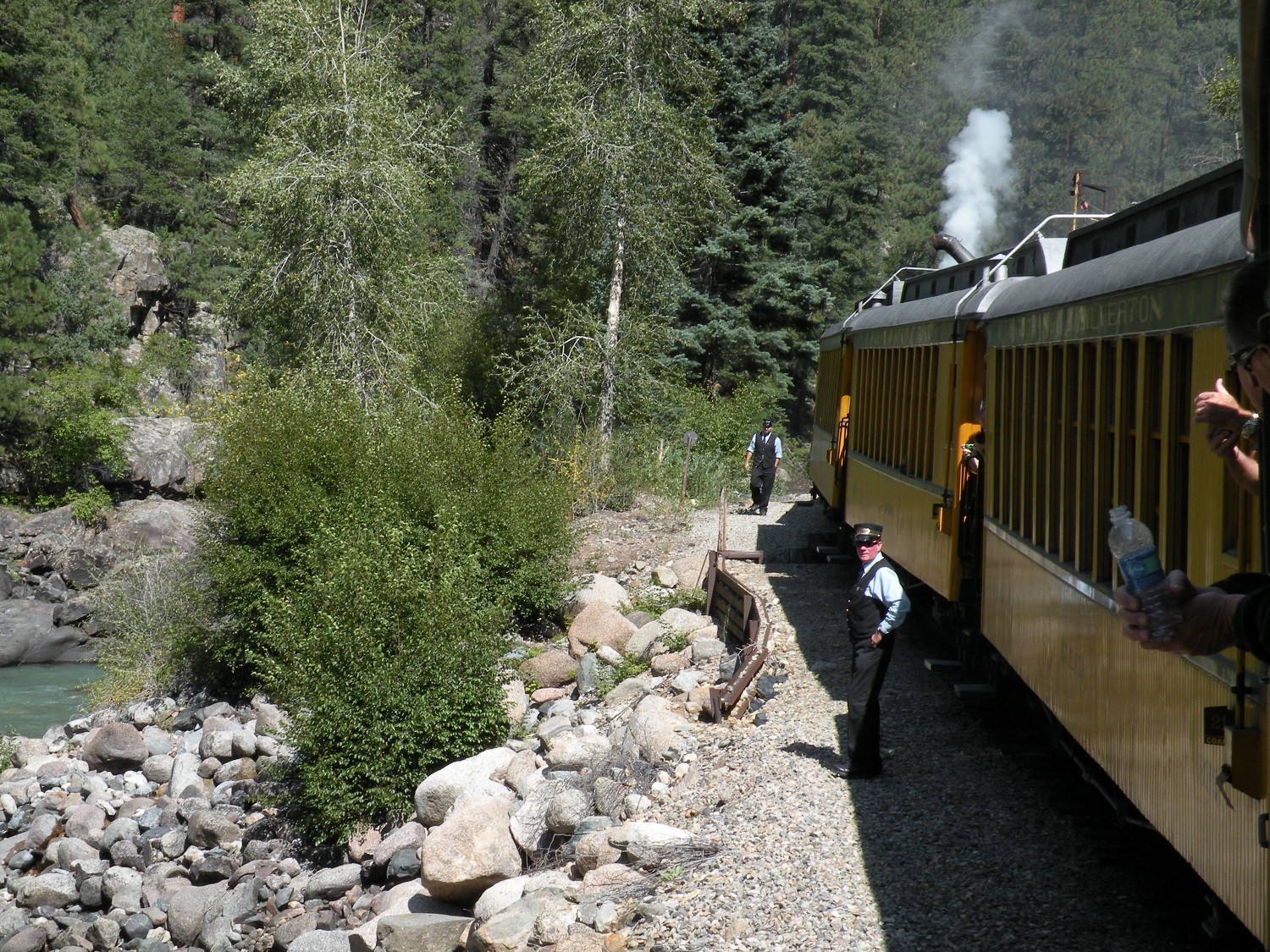 The blast from the whistle of the locomotive quickened my pulse. “Make way! Make way—I’m coming through,” it seemed to say.

A huge plume of black smoke rose from the stack as the Narrow-Gauge Durango-Silverton Express train made its rock-a-billy way along the mountain ledge. I leaned out of the open-air gondola car to get a better view of the Animus River churning through boulders as big as boxcars. It is one of the few rivers in America that flows unrestricted by dams from headwaters.

A silver-haired woman standing beside me shared my exultation as we snaked along the narrow ravine sheathed in blue-green spruce. She giggled then hung her head in the wind, sniffing the crisp breeze like a happy puppy.

“I think I must have been an engineer in a past life,” I said leaning out of the gondola to face the world head on.

“My parents took me on this trip when I was five,” she said, smiling all over herself. “This is my first time back.”

For over 120 years, this relic of the American West has been chugging up the rugged canyon; a journey of about 45 miles. At eighteen miles an hour the round trip takes all day. The rail was established to haul silver and gold ore from the mines in Silverton to the town of Durango. Despite the formidable terrain, and without the aid of modern equipment, it took hand-laborers only a miraculous nine months to blast through the precipitous stone walls framing the ravine and to erect wooden trestles spanning gaping gullies and the raging river far below.

When the mines were depleted, the train was revamped to accommodate wealthy turn-of-the-century travelers. Today, the lovingly restored train is host to about 1,200 tourists a day in peak season.

that fill the air with their pungent scent. Though only mid-summer, the hardwoods’ sage-colored leaves were already tipped orange, crimson, and gold. Puffing happily, the train sashayed back and forth across the valley floor through wildflower meadows spiked with stands of columbine and shooting stars, then thundered over wooden trestles high above the reach of the rushing water.

When the train arrived at Silverton, population 500, we were given a few hours to explore the old mining town once famous for its outlaws, ladies of negotiable affections, and miners eager to stake their poke on a game of chance. The sleepy Victorian town rests in an alpine valley that is 9,300-feet above sea level and surrounded by 13,000-foot peaks. It is the most active avalanche zone in the country.

I looked up to admire the amphitheater of rock spires peering down upon us, sucking in the rarified air as I scoped out the copper-colored stream rich with mineral deposits. I strolled down Main Street. The summer tourist season is short so shopkeepers in this isolated burg keep prices competitive. I purchased a fire-opal ring from a shop owned by Native Americans for about half of what it would cost in trendy Durango.

A blast from the train whistle signaled “All Aboard.”

Once back on the train, I found the still-beaming, silver-haired lady who told me her name was Sarah. We were both eager to get on with the downhill glide back to Durango. The engineer took pains not to pick up speed as we rattled down the tracks, applying the brakes with a jolt at regular intervals. The effortless descent through the cool glades, across the rushing Animus seemed a fitting reward for the massive coal-fired locomotive that had huffed and puffed its way 3,000 feet up the mountain This time we rocked through the forest without the billow of dark smoke rising from the engine to mar the crystalline air.

All the way down though the gorge, Sarah mirrored my awe over the ever-shifting patterns of Mother Nature’s handiwork.

“It’s more vibrant than I remembered,” she said, blinking back tears. She told me that since her trip as a child through this canyon her eyesight had grown progressively worse, until at 64, she was nearly blind. Six months ago, she had undergone laser surgery and this trip was to celebrate the success of her operation. All of her life she held onto the visual memory of the ride up this canyon in her slowly darkening world, and today she was seeing it again with new eyes.

The joy of sharing the day with someone who appreciated the undisturbed beauty before us fully as much as I did, meant more than any souvenir I could buy. I was thrilled to discover another haploid, someone like myself, totally engaged in the state of exploration, in “just seeing.”

The rush of the spinning aspen leaves glinting in the sun, the sight of a stag swinging his antlered head from side to side watching us pass through his green world, and the beauty of languid butterflies drifting on the breeze, remain stored in a quiet place in my heart.

Since that trip, I made it my mission to get to as many pristine places as I can before they are gone. 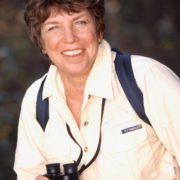