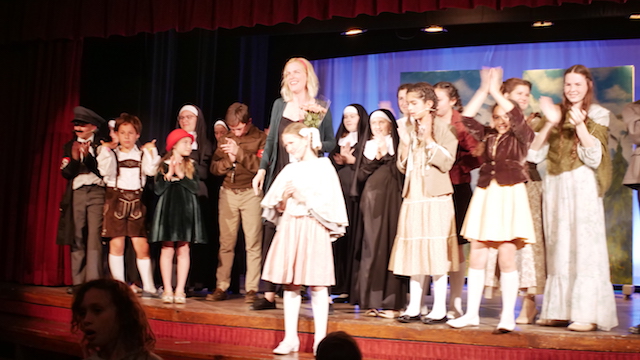 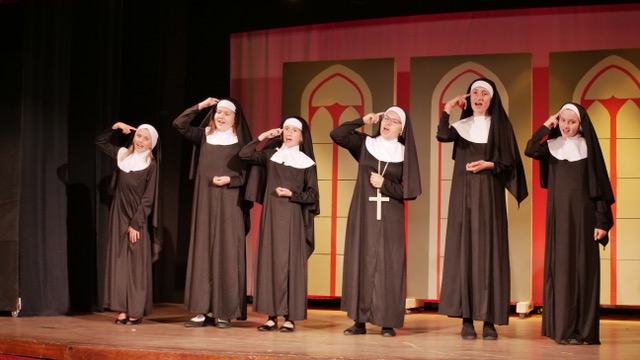 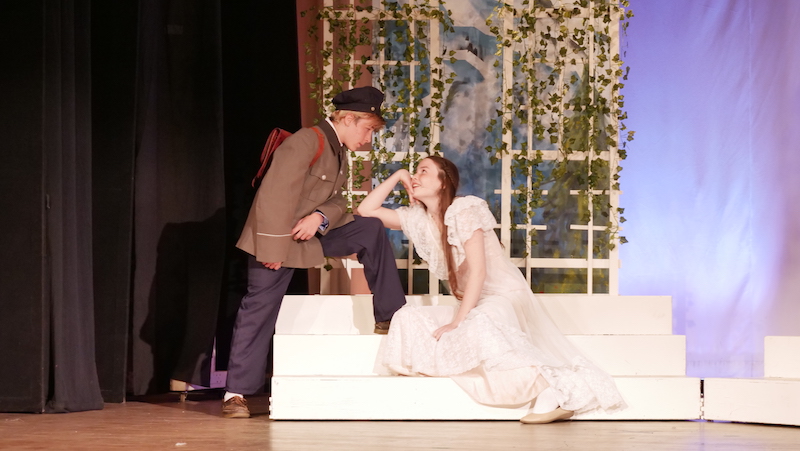 Cooper Boynton as Rolf and Mila Chapman as Liesl. 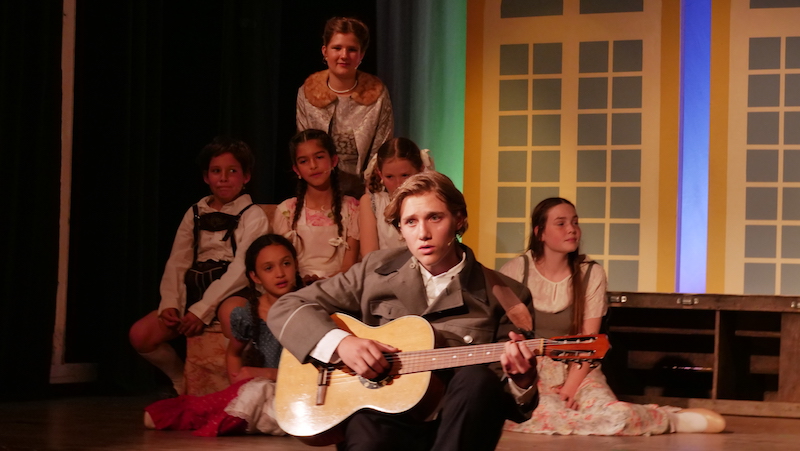 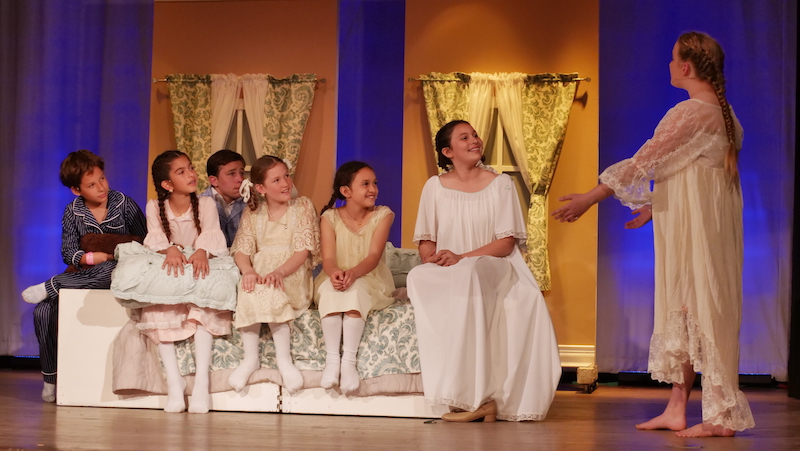 The hills were more than alive in the frolicking production of The Sound of Music presented by Topanga Youth Services (TYS) at the Topanga Community House the weekend of April 6. How appropriate to bring the uplifting Rodgers and Hammerstein musical, set in the Austrian mountains, here to our own.

Under the guidance of Director/Producer, Karen Cooke, the opening scene was especially moving with Sierra Friday in the role of Maria, a novitiate in the Nonnberg Convent in Salzburg, Austria. Confused, she is drawn to her beloved hills to nourish her soul.

In this junior production, the hills do come alive, as trees move, animals dance, rivers ripple and rainbow birds seem to fly. Who wouldn’t want to linger there? But alas, Maria is late and must return to the convent where she is at odds with the cloistered life. Maria is a demanding role and Friday carried it well throughout.

Choreographer, Kristy Beauvais, brings her imaginative talent to all the scenes, intimate or grand, including the dancing, singing nuns, who wonder how to “solve a problem like Maria.”

The nuns were enhanced by a tall, deep-voiced sister of their order, played with aplomb by Noah Carey (14). Carey was double-cast as Frau Schmidt, the housekeeper for the Von Trapp household, who is nobody’s fool. This was a brilliant stroke of casting that Carey carried off with comedic ease to the unending delight of the audience.

Maria, hired as governess, arrives at the Von Trapp household with guitar in hand and an open heart, where she meets the children who had dispensed with four previous governesses. Their widowed father, Captain Von Trapp (Elias Klemp) runs the family like a military unit, but Maria, through the gift of song, changes everything.

Klemp truly brought depth and understated humor to the role, taking the Captain from a stern, distant patriarch to a caring man who recovers not only his heart but his singing voice, when he accompanies himself on guitar in a lovely rendition of “Edelweiss.” When the Captain, who resists the encroachment of Hitler’s army, finds a Nazi flag hanging in his garden, he rips it in half with a fiery fury that brought rousing applause.

The Von Trapp children, marched, sang and danced through their ensemble scenes with a joie de vivre, touching in its innocence.

Cooper Boynton as Rolf, the romantic postman in love with Liesl (Mila Chapman), the eldest Von Trapp daughter, played the transition from lovesick pup to Nazi Youth well when he rejects Liesl. Together with Mila Chapman’s moving depiction of being young, in love and full of hope— with a voice to match—their touching duet and dance to “Sixteen Going on Seventeen,” was another reason to get out the Kleenex and marvel at the talented children of Topanga.

The puppet scene was a rambunctious romp with Emunah ZagataJacobson, splendid as the Lonely Goatherd, who seemed anything but, surrounded as she was by adorable puppets and talented goats (loved the goats!). Yodeling was involved and the song lingered long after the curtain came down.

Maria and the handsome Captain develop an attraction, but the arrival of the glamorous Baroness Schrader, his bride-to-be, interrupts their romance. Played with a coy, flirtatious sophistication by Faye Gaines, the glamorous Baroness is an understanding rival who graciously steps aside, to let true love take its course. To the joy of all, Maria becomes the Captain’s bride and mother to the children.

The Von Trapp family friend, and showman, Max Detweiler, played by mustachioed, Liam Williams, presented a character so likable he would be welcomed in any home, especially if a wine cellar is easily available.

The final scene of the family escaping over the Alps was an uplifting flight to freedom, especially for one young Nazi officer in pursuit of them, who seemed to “accidentally” appear in their company. I like to think he was defecting.

TYS is to be congratulated on selecting this play, which is a gentle but effective early exposure to the horrors of fascism. Under the guidance of Music Director, Summer Rona, the cast soared through the familiar songs, bringing tears and laughter to all, including Summer herself. Yes, I saw you crying.

The enthusiasm of the cast was evident. Young actress, Isabella Martin, was bubbling over as she acknowledged, “There were some problems trading microphones. It was crazy, but it all worked out.”

Campbell Boynton, who, like many in the cast, played double and triple roles, said, “I really wasn’t nervous, but there sure were a lot of costume changes.”

Sierra Friday, a natural in her role of Maria, explained, “I love the experience of performing live and feeling the energy of the audience.”

Mila Chapman, aglow after her performance, confided, “I sing all the time.”

Kudos to the entire cast and crew and all those who supported TYS in keeping our hills alive with The Sound of Music.

It has been said that Kathie Gibboney invented the Unicorn, which she neither admits nor denies, as it might reveal her true age. Kathie is an essayist, reporter, and poet for MMN with her column, "My Corner of The Canyon." She lives happily in a now-empty nest in Topanga, CA with The Beleaguered Husband and a marmalade cat.