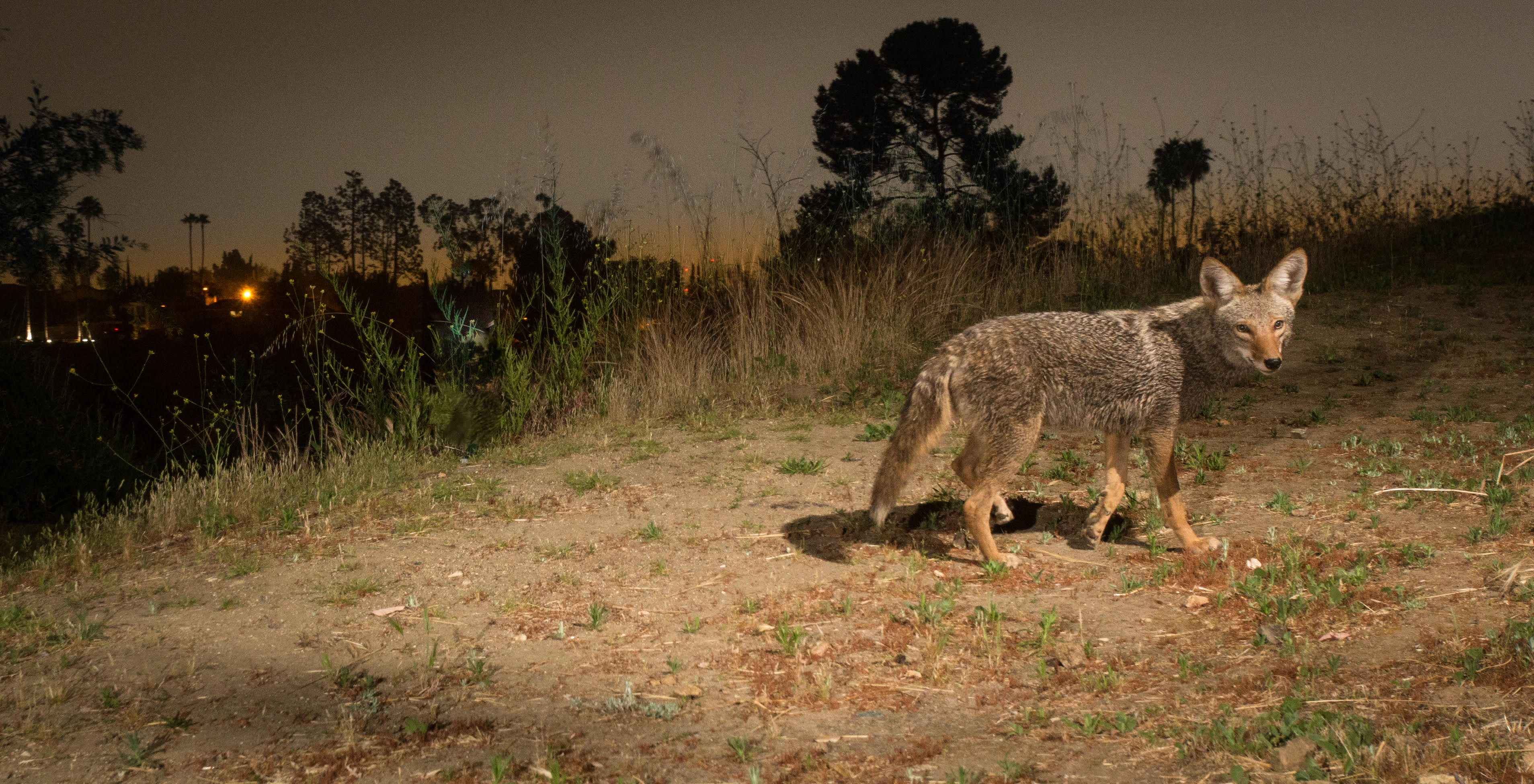 Johanna Turner’s remote cameras record the unseen lives of wildlife like this coyote, traveling a wildlife corridor above the lights of the city. All photos by Johanna Turner 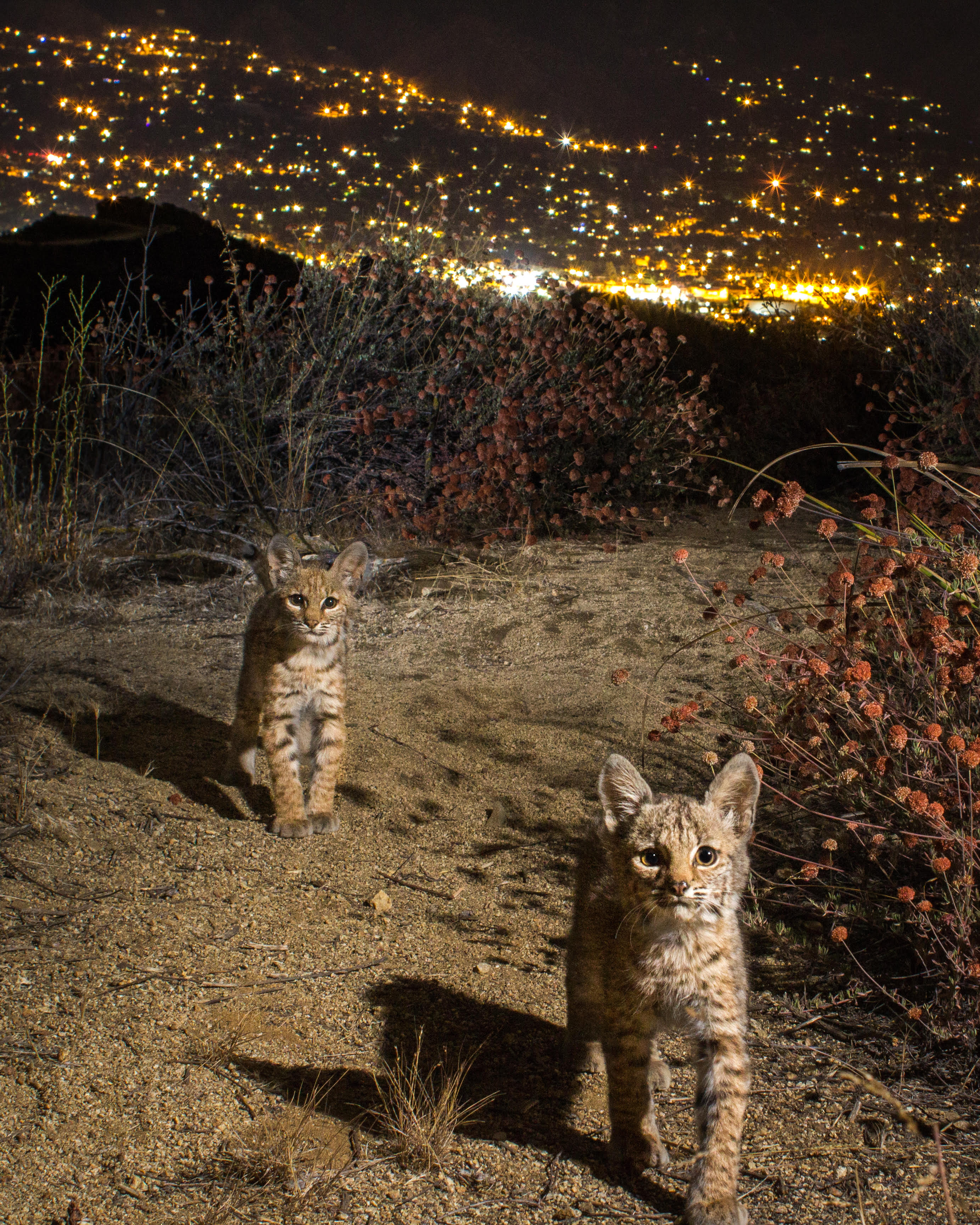 Johanna Turners photo of two bobcat kittens with the lights of LA in the background is one of her most iconic images. It was recently featured in the Natural History Museum of Los Angeles County’s new book Wild LA. 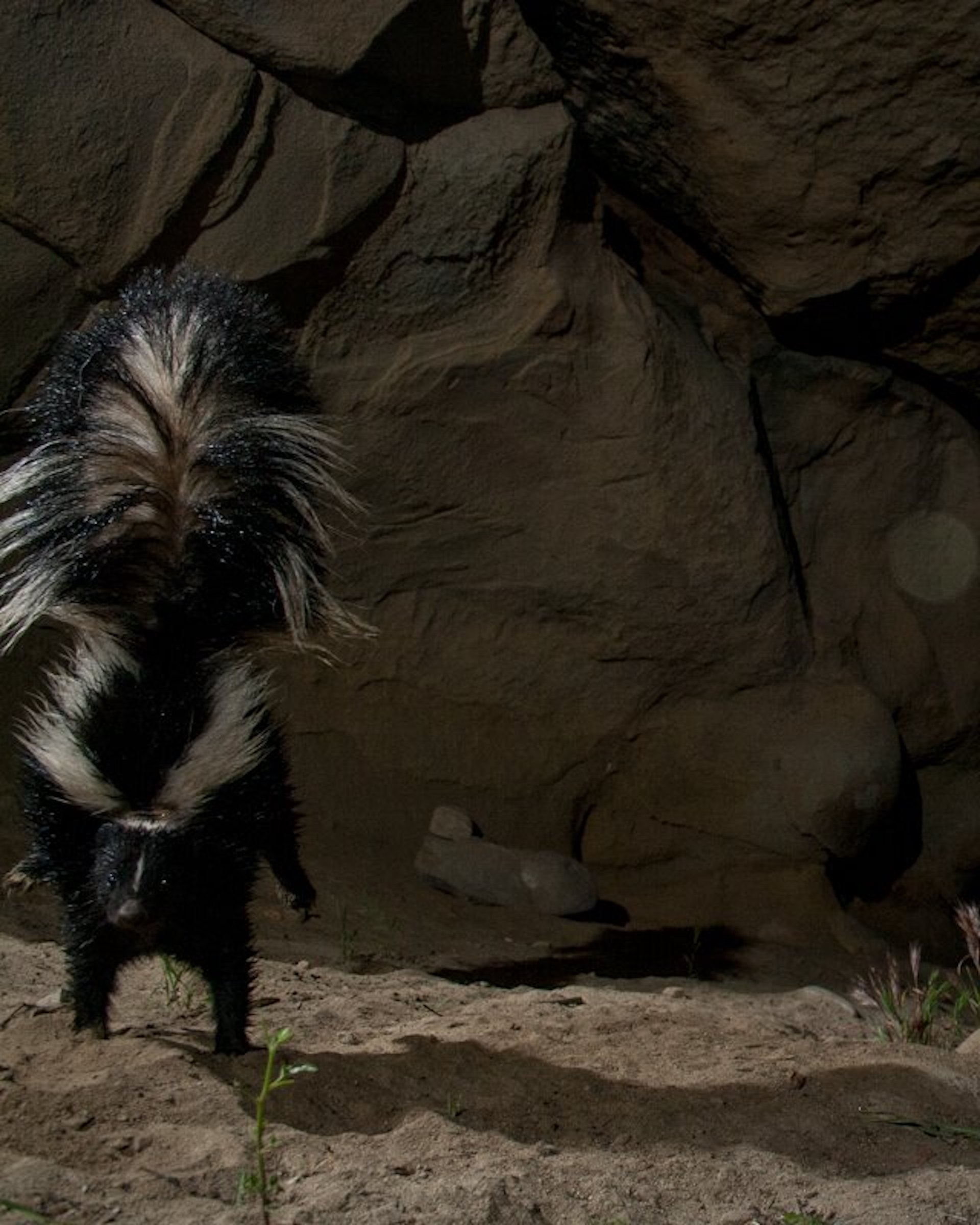 Turner’s camera captured this skunk performing its distinctive “war dance” to warn an unseen predator that it means business. On her Facebook page she captioned the image with one word: trouble! 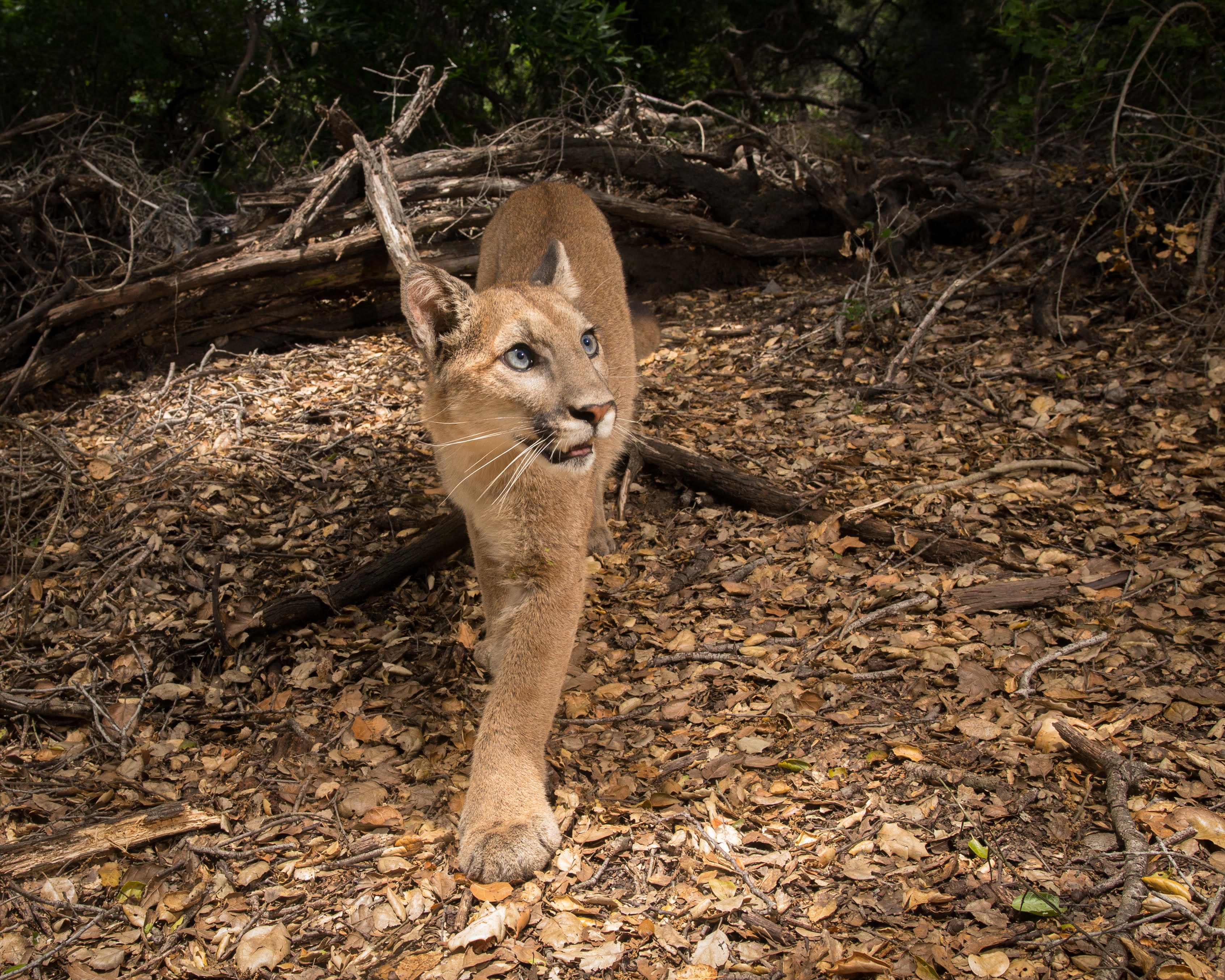 P-75 is the Topanga-area mountain lion who made headlines recently after turning up in a Pacific Palisades mobile home park. Turner and other “camera trappers” do more than capture captivating portraits of their subjects. They also help provide vital data on wildlife like mountain lions for researchers, the presence of previously unidentified animals, and visual cues on their health and wellbeing. 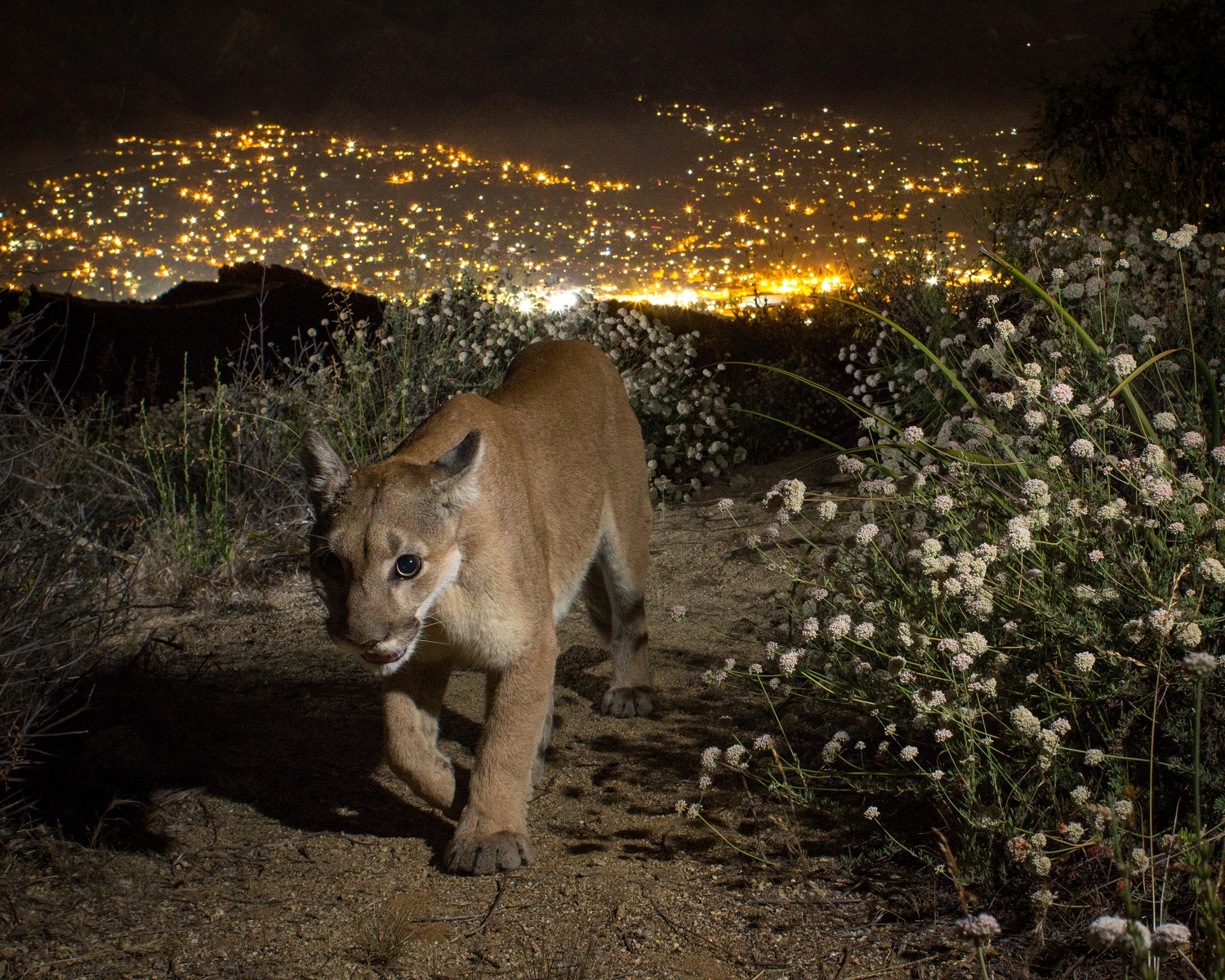 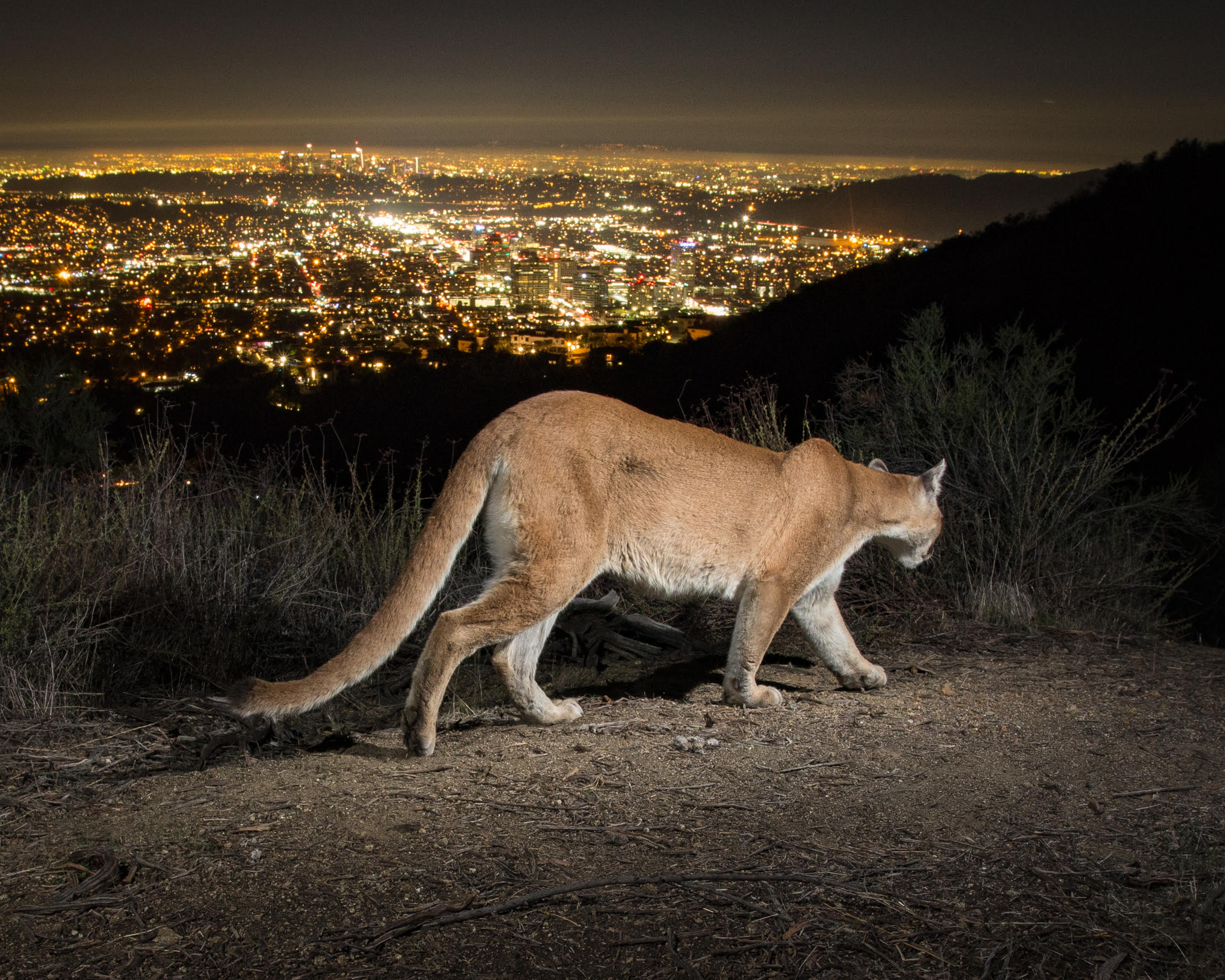 “Night Visions” is a must-see exhibit and sale of Johanna Turner’s stunning photography at the Santa Monica Mountains Interagency Visitor Center at King Gillette Ranch. Turner prefers to call herself a “camera trapper,” not a photographer. Her photographs have also become an important tool for wildlife researchers, like the team that studies mountain lions, bobcats, and coyotes in the Santa Monica Mountains for the National Park Service.

Wildlife photographer Johanna Turner uses motion-activated remote cameras to capture the secret lives of local wildlife. Turner calls herself a “camera trapper,” not a photographer, but  many of the photos she takes are spectacular. She has a special love for mountain lions and bobcats, and the candid images she captures of LA’s big cats have earned her national attention.

Two of her most instantly recognizable subjects are the Verdugo Hills’ mountain lions nicknamed Nikita and Apollo. Turner’s cameras have captured the big cats on a ridgeline trail with the lights of the city in the background, slipping ghost-like through canyon gardens, and even lounging on backyard patios, but her portfolio also includes bobcats playing, hunting, and resting; black bears, coyotes, gray foxes, American badgers, even the occasional owl.

One image captures a skunk performing the handstand that tells an unseen potential predator that it means business, and is ready to fire at will. Another features a black bear nose-to-nose with the camera.

Because the cameras operate remotely without a human presence, the animals are unafraid. They behave the way they would if they were unobserved, except perhaps for the bears, which are curious about the cameras and have been known to lick them and even try to pull them down. Turner calls them her mischief makers.

Capturing this invisible world requires patience, determination and a keen eye for the best places to site a camera.

“I set up, adjust the camera, wait, adjust it again—sometimes by just a small fraction, and wait, and wait,” Turner told the Messenger Mountain News.

Turner, a professional sound editor, moved to LA from the East Coast more than a decade ago.

“There aren’t any big animals where I grew up,” she said. “I was hoping to see some here.” She explained that she enjoyed hiking in the local mountains but the wildlife was elusive, so she signed up for a tracking class. It would be a life-changing experience.

“The instructor stopped to check a trail camera,” Turner recalled. “I saw the photos and said, ‘I’m going to do this now.’”

Turner bought an inexpensive trail camera, set it up, and never looked back. She experimented with a variety of cameras, including working with an expert to learn how to adapt regular single-lens reflex cameras for remote trail use. The results have been stellar.

“I never imagined I could get images like these,” she said.

The photos Turner captures have appeared in numerous publications. She now frequently teaches tracking classes of her own, inspiring new enthusiasts to learn more about LA’s wild neighbors.

Turner’s wildlife photography is an art form and storytelling medium, but it’s more than that. The data Turner and other remote wildlife photographers collect is an important tool for wildlife researchers, like the team that studies mountain lions, bobcats, and coyotes for the National Park Service.

On the day the Messenger Mountain News spoke with her, Turner was excited because one of her cameras captured a glimpse of what may be a previously unknown adult male mountain lion. A partial view of the cat was caught on video—not enough for a positive ID, but more than enough to spark the imagination.

Remote cameras are helping to reveal details about the lives of these animals that were previously completely unknown. They also help researchers identify critically important wildlife corridors and gain a better understanding of wildlife movement.

Turner has permission to set her cameras in some special and hard-to-access areas that are wildlife havens, including the Santa Susana Field Laboratory and Tejon Ranch, but she also records wildlife in the Santa Monica Mountains National Recreation Area (SMMNRA), and in densely urban areas like the Verdugo Hills, home to bears as well as mountain lions, despite a fragmented habitat.

Turner uses her Facebook page not only to share her breathtakingly beautiful images of mountain lions and other wildlife, but also the less-than-perfect captures and near misses, where the camera caught the wrong end of the animal, or perhaps just its tail or whiskers. She also shares photos of the challenges involved in installing and checking the cameras, like a rattlesnake enjoying a squirrel picnic at the foot of a camera installation, or the grisly remains of a deer left by a passing puma.

Turner stresses that she never uses bait or lures, and that her goal is to never disturb or interfere with the animals she photographs. Her patience has paid off with an impressive collection of images that reveal the intimate lives of her subjects.

On her Facebook page Turner writes, “I hope these photos promote conservation for predator species. Los Angeles has proven that 18 million of the least outdoorsy people on the planet can safely share habitat with wildlife.”

For anyone with a love of wildlife or curiosity about the mostly unseen world of animals that exists parallel to our own, this is a must-see exhibition.

To see more of Turner’s work, visit her Facebook page: facebook.com/Cougarmagic; or her online gallery, cougarmagic.com