Features, Living with the Constitution
March 6, 2020
by Suzanne Guldimann 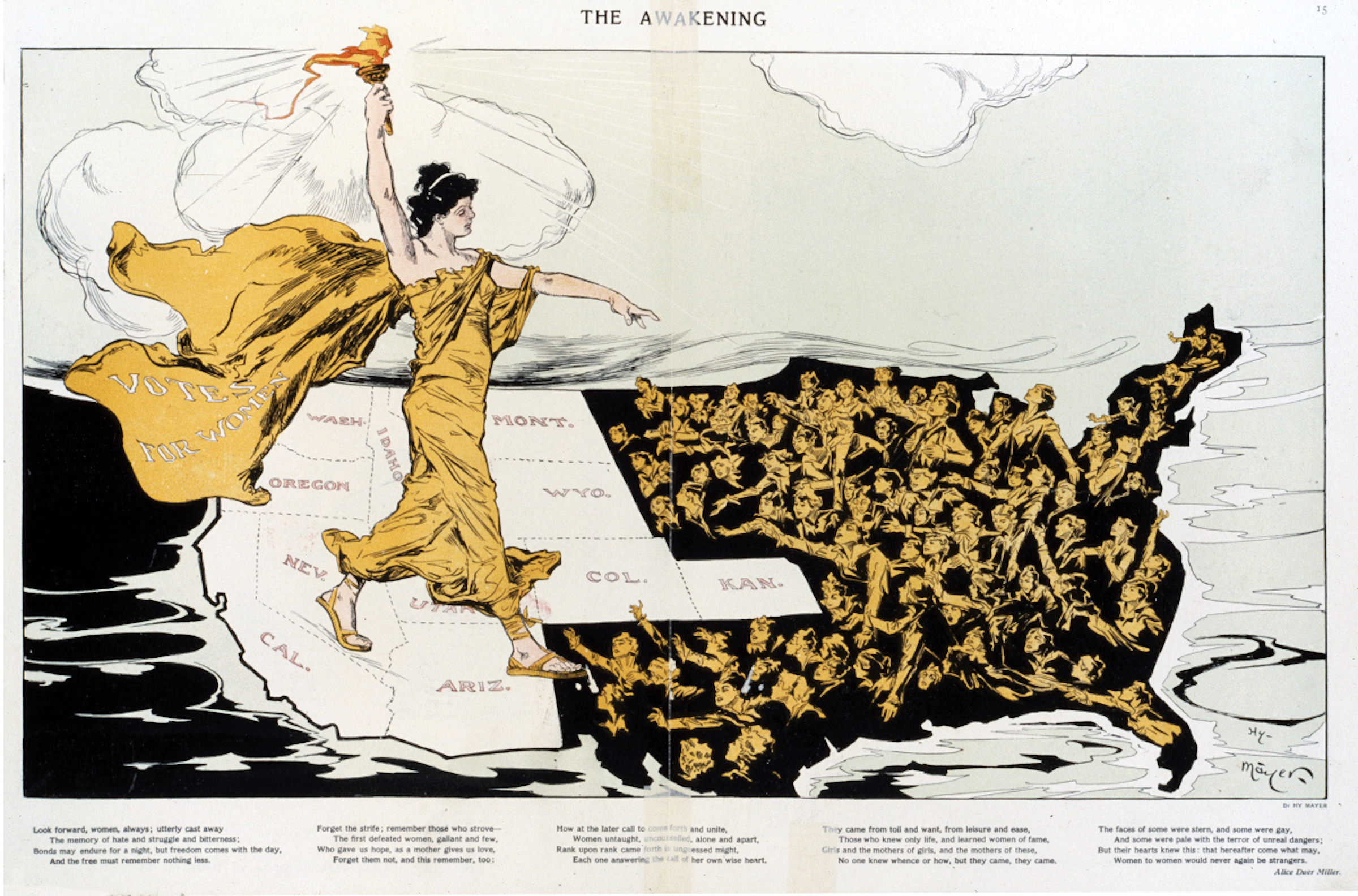 The cover of a 1911 Suffragist Pamphlet celebrating the passage of California’s Proposition 4 and showing the American West as the leader in the push for Women’s rights. Image courtesy of the Library of Congress 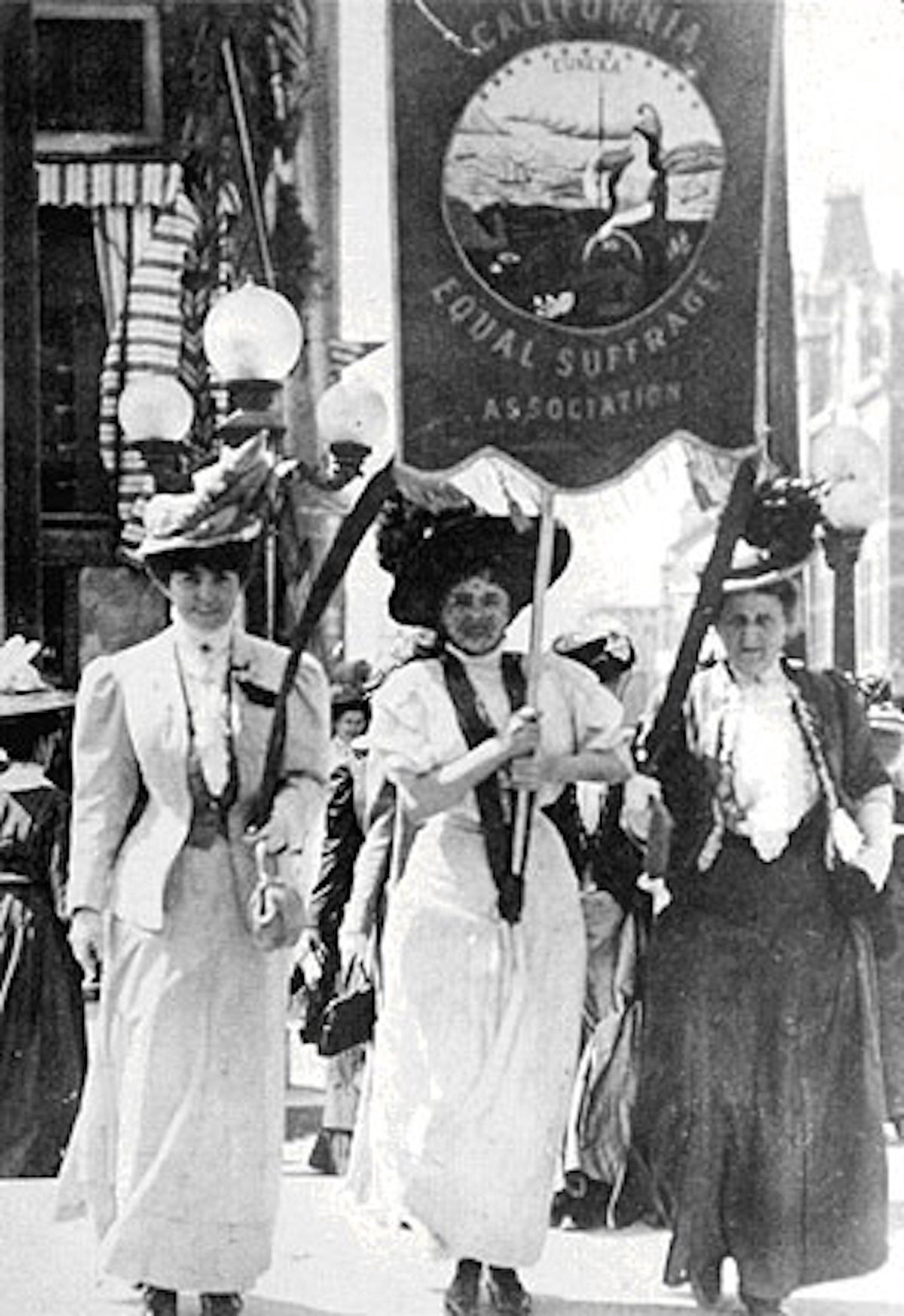 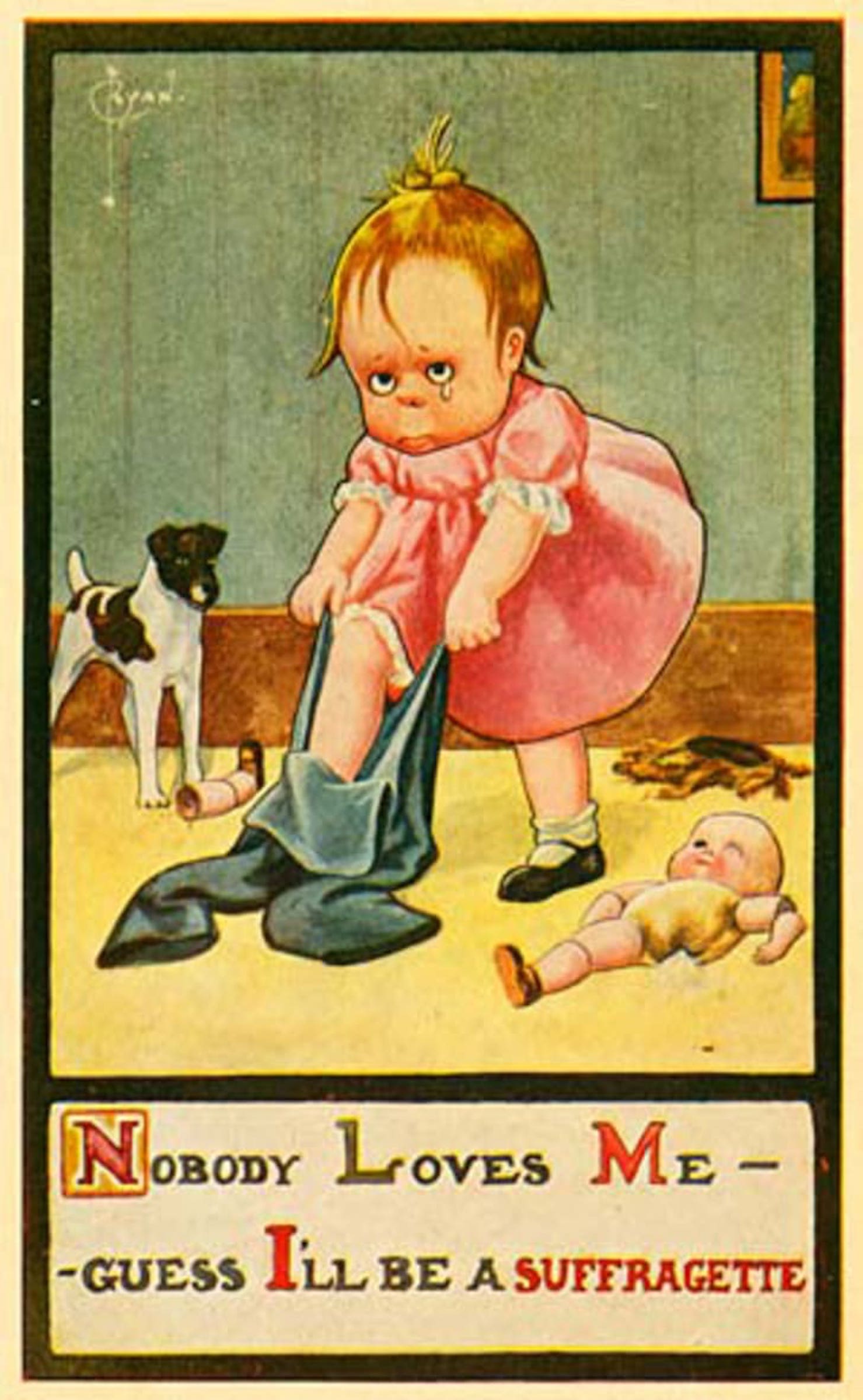 Above, the cover of a 1911 Suffragist Pamphlet celebrating the passage of California’s Proposition 4 and showing the American West as the leader in the push for Women’s rights. Image courtesy of the Library of Congress

The 19th Amendment turns 100 in 2020, but for many, the scatterbrained firebrand played by Broadway actress Glynis Johns was their first introduction to the issue of women’s votes. Her line, “Take heart, for Mrs. Pankhurst has been clapped in irons again,” refers to the real struggles of early 20th Century British political activist Emmeline Pankhurst, organizer of the suffragist movement in the UK, who was arrested multiple times for civil disobedience. In 1999, Time Magazine named Pankhurst one of the “100 Most Important People of the 20th Century,” for her role in “shaping the idea of women for our time.”

Mrs. Banks is a comic character, but votes for women was still very much an issue when the film debuted—women in 28 nations had not yet won the right to vote in 1964, including a surprising number of Western democracies.

Women in Switzerland only gained the right to vote in federal elections after a referendum in 1971. Women in Portugal had to wait until 1976, and in the tiny Principality of Lichtenstein, women didn’t get the vote until 1986. Saudi Arabia became the last major nation to give women the right to vote in 2015. Women in Vatican City may never have a voice in the governance of that tiny nation state: only cardinals can vote, and only men can be cardinals.

The Sherman Brothers, Richard and Robert, who wrote the songs for Mary Poppins, would have been too young to remember the suffragette movement referenced in the movie, which is set in the Edwardian era, but studio head Walt Disney wasn’t: he was 19 when the 19th  amendment was ratified in 1920 in the U.S..

The fight for women’s suffrage took more than 70 years to win in the U.S. The publication of a corollary to the Declaration of Independence that proclaimed “all men and women are created equal,” authored by participants of the Seneca Falls Convention in New York State in 1848, is often considered the opening salvo of the war. Social reformers and abolitionists Elizabeth Cady Stanton and Lucretia Mott,  who organized the event, went on to become key figures in the fight, but the issue of whether women had the right to “life, liberty and the pursuit of happiness” goes back to the roots of the anti-slavery abolition movement at the start of the 19th Century.

Long before the British newspaper The Daily Mail coined the term “suffragette” in 1906, suffragists were arrested, imprisoned, ridiculed, harassed and attacked.

In Britain, militant activists embraced the derogatory term suffragette and responded with guerrilla tactics: chaining themselves to buildings, setting things on fire, and even setting off explosives.

In the U.S., a pragmatic state-by-state approach was adopted, but there were militant suffragists here as well, including Alice Stokes Paul, an American activist who traveled to Britain to take part in the protests. She was arrested seven times, and was one of the activists force-fed in prison while participating in a hunger strike. It ruined her health, but not her determination to win the vote for women.

New Zealand was the first modern country to acknowledge women’s voting rights in 1893, while the government was still a British Colony. Mrs. Banks would have been able to vote for the first time in 1913, when women of property over the age of 30 were grudgingly given the right to vote: her cook, maid, and nanny, magical or not, would have had to wait until 1928, when all British women over the age of 21 finally won the right to vote.

Wyoming became the first U.S. state where women had the vote. The legislation was passed in 1869, when Wyoming was still a territory, and carried over into statehood.

Utah adopted a similar law in 1970. California’s suffragettes succeeded in 1911, with a ballot measure that squeaked by with a victory margin of just 4000 votes—proof that every vote really does count.

By 1914, women had the vote in 11 states, but the prospect of war put the issue on ice. By the end of World War I in 1918, it was clear that the opposition was crumbling even in the most conservative parts of the country. On August 18, 1920, The 19th Amendment, “the right of the citizens of the United States to vote shall not be denied or abridged by the United States or by any State on account of sex,” was enshrined in the Constitution. The state of Tennessee was the last to ratify the amendment in 1920, and did so reluctantly.

In February 2019, female Democratic members of the U.S. Congress dressed in white in a show of solidarity at President Donald Trump’s State of the Union address. The color was one of two chosen by the suffragettes more than a hundred years earlier.

It’s a maxim of suffrage that women’s rights are human rights. A hundred years after the 19th Amendment was ratified, nearly 200 since the movement’s pre-Civil War abolitionist origins, the concept of suffrage—basic human rights and equal recognition—remains relevant.