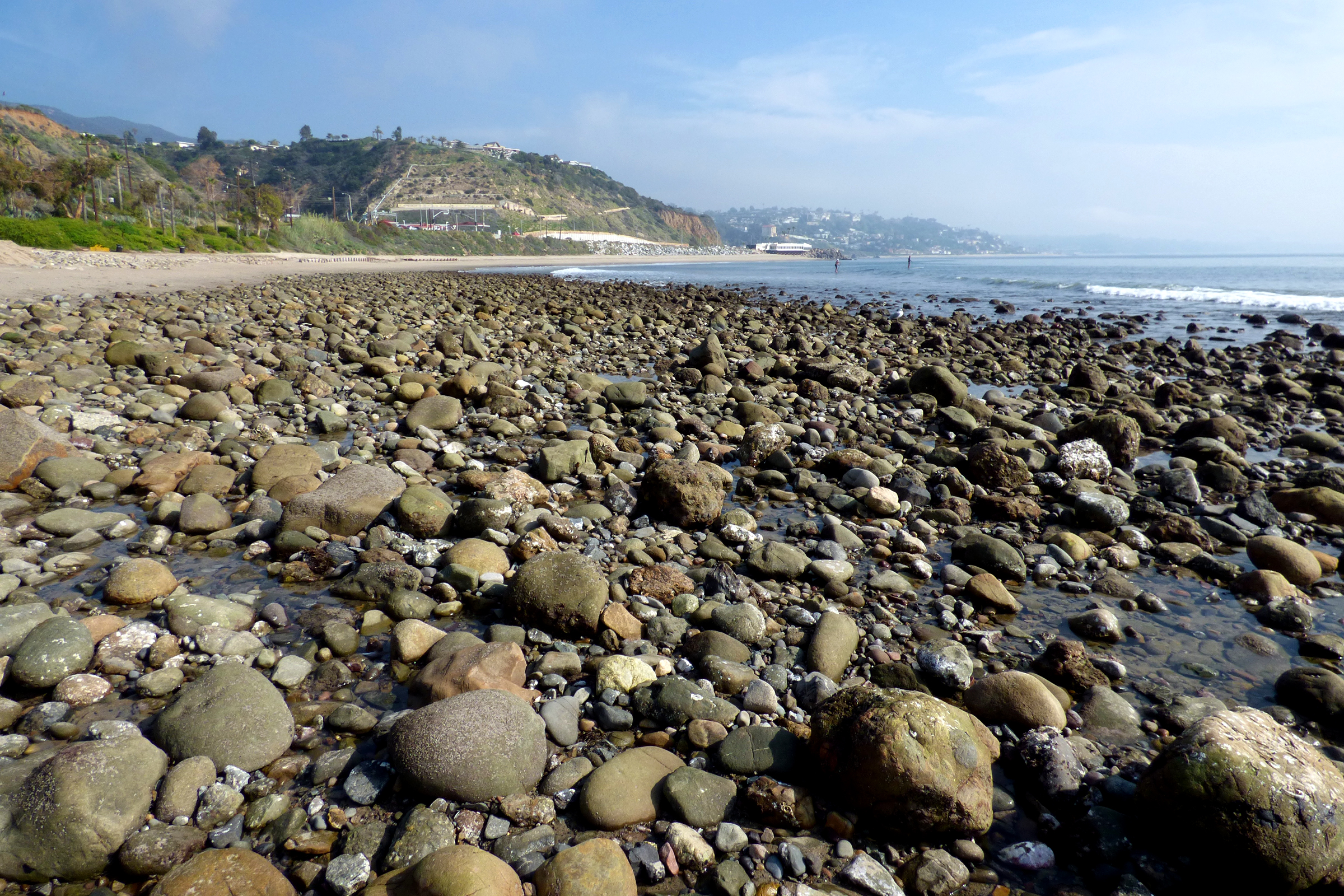 Topanga State Beach. Completely hidden much of the year, this amazing intertidal world is only fully revealed during the lowest tides of the year. Photos by Suzanne Guldimann 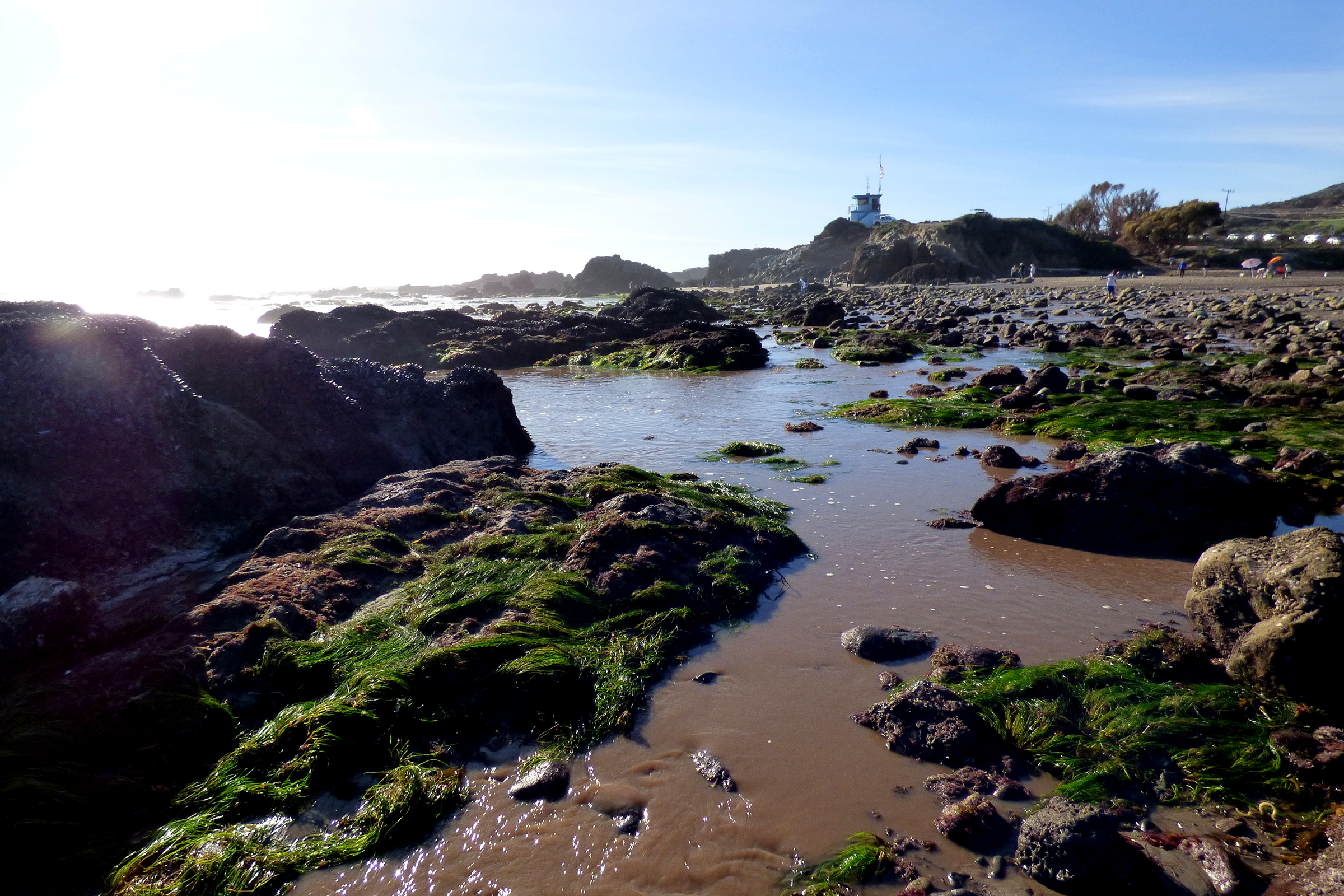 Leo Carrillo’s usually pristine tide pools were filled with mud from the first post-fire rains when the Messenger Mountain News visited in January. The creek deposited vast amounts of silt, ash, rocks, and even trees. Some of that material will be cleared out during February’s high tides. 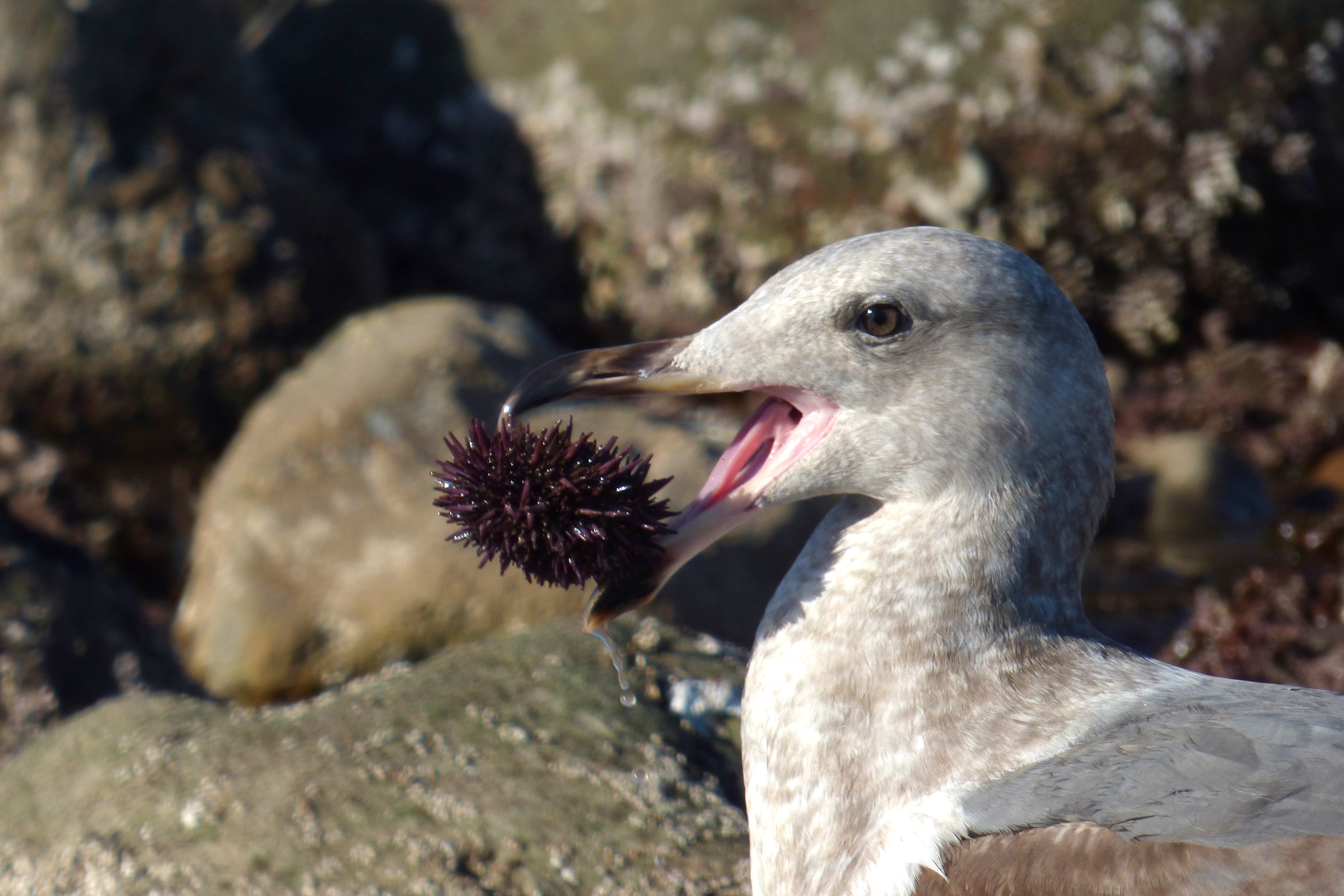 A juvenile gull tries to swallow a sea urchin whole. Older, wiser birds sometimes carry urchins up into the air and drop them on the rocks below to make them easier to eat. For shorebirds like gulls, low tide offers an all-you-can-eat buffet. 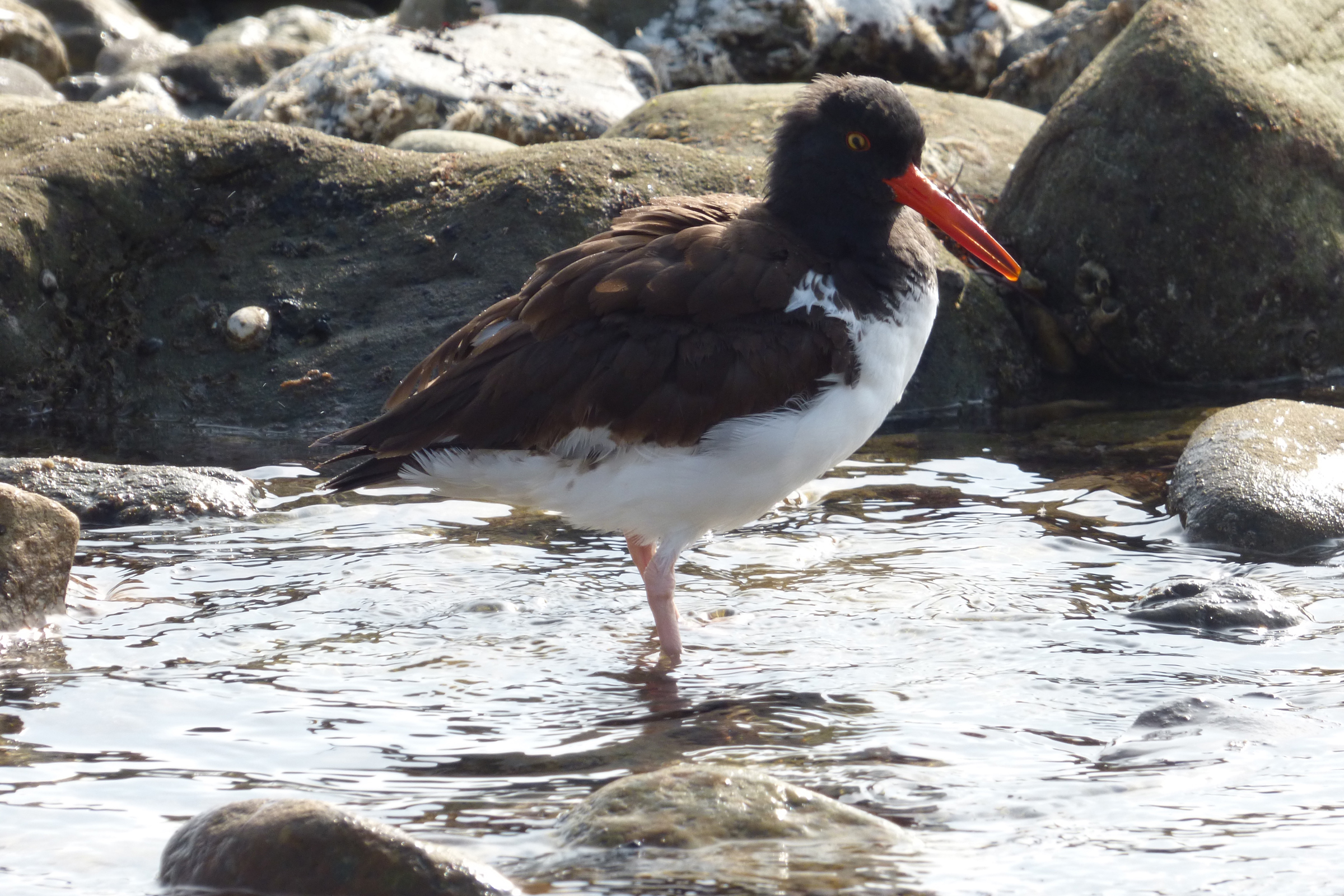 American oystercatchers are more common south of Baja, but this one turned up in the tide pools at Topanga State Beach. Winter often brings unusual migrant species to the coast, as well as seasonal residents that may travel from as far away as the Arctic circle to winter here. 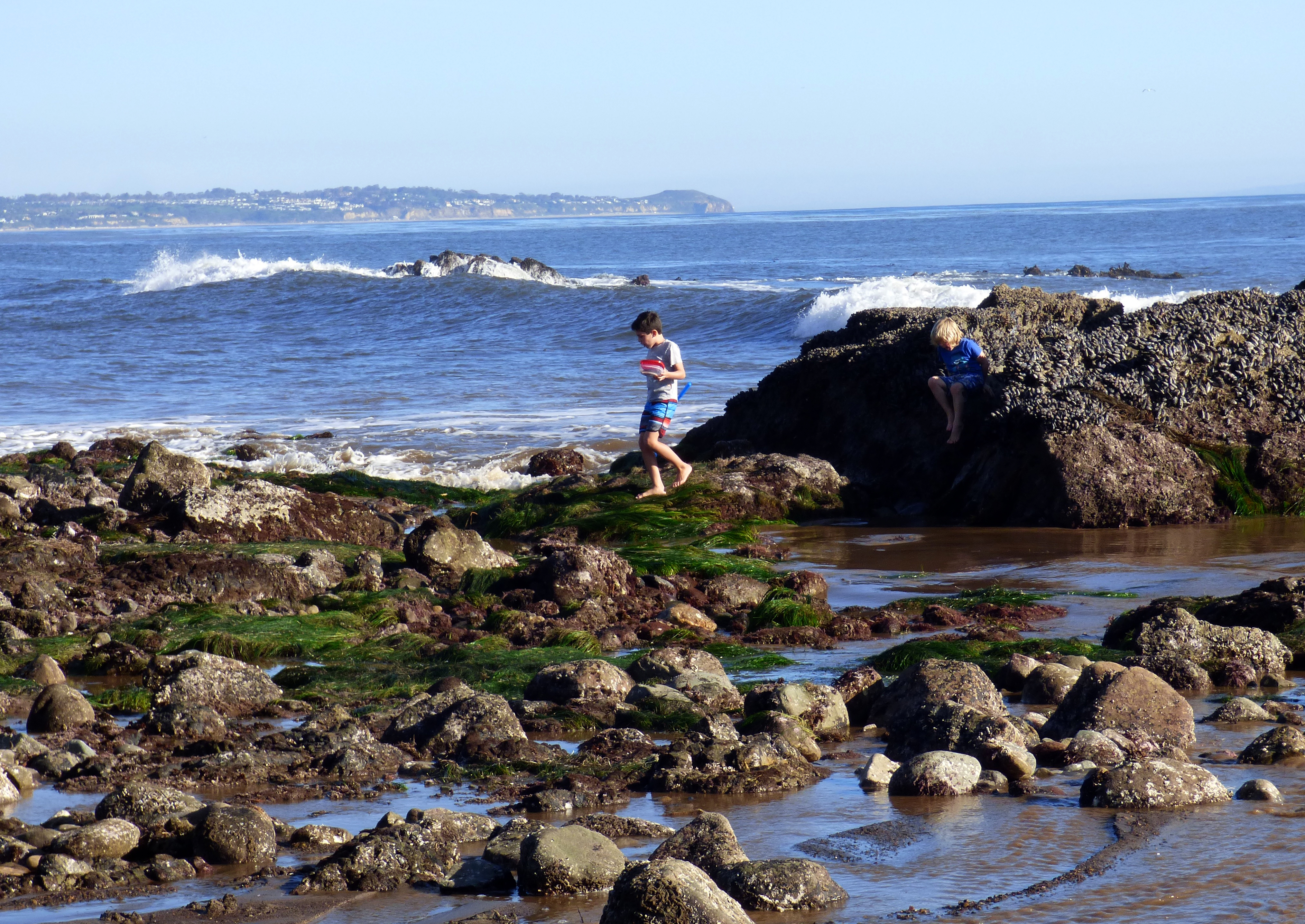 A pair of young explorers reluctantly head back to shore at Leo Carrillo State Park’s tide pools. This area is usually the domain of surfers, seals, and sea lions, only accessible by foot during the lowest tides. 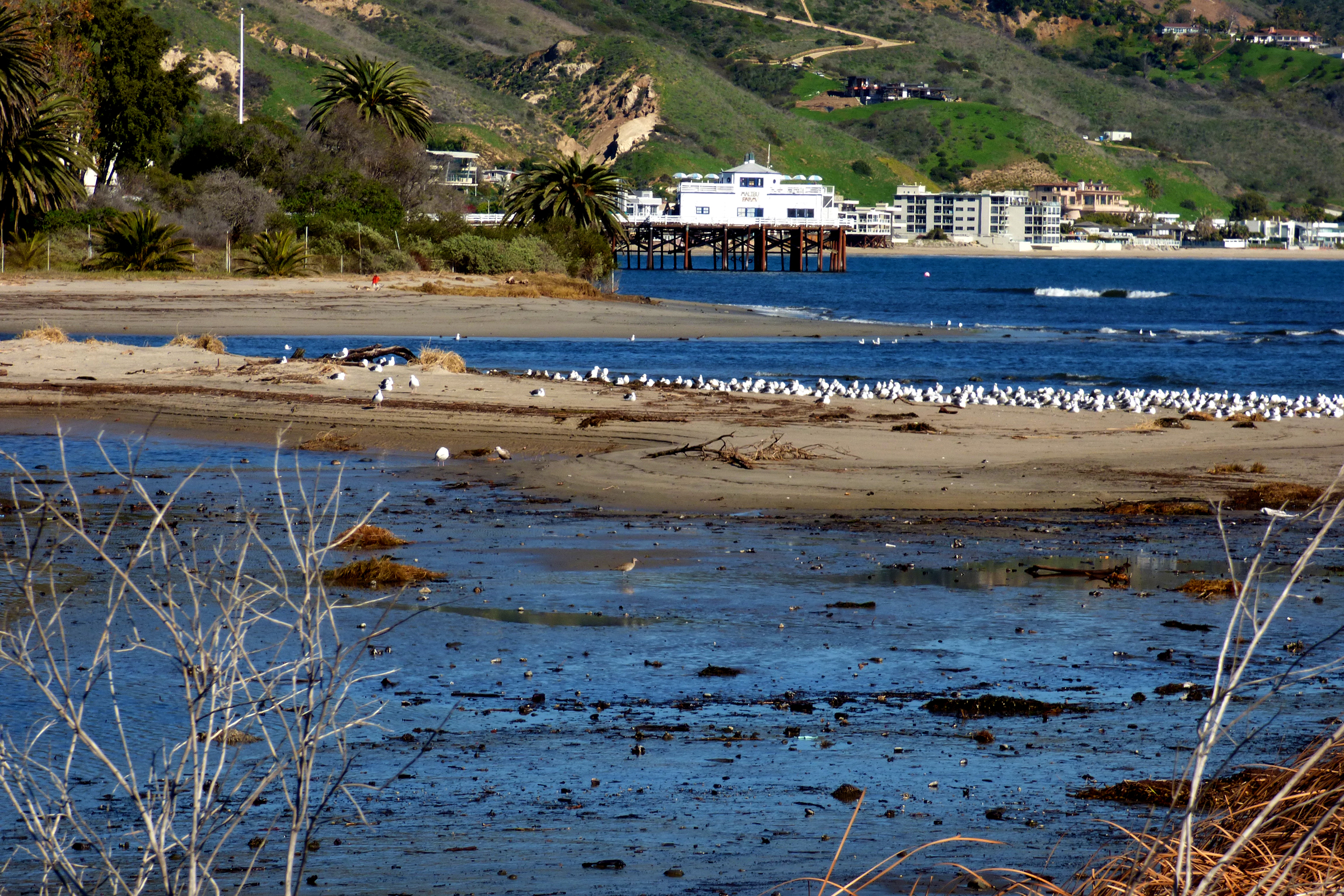 Low tide at the Malibu Lagoon reveals silt and debris deposited by the post-fire rains. Numerous shorebirds gathered on the sandbar at the mouth of Malibu Creek. That’s Surfrider beach in the background, but on a day without surf or surfers. 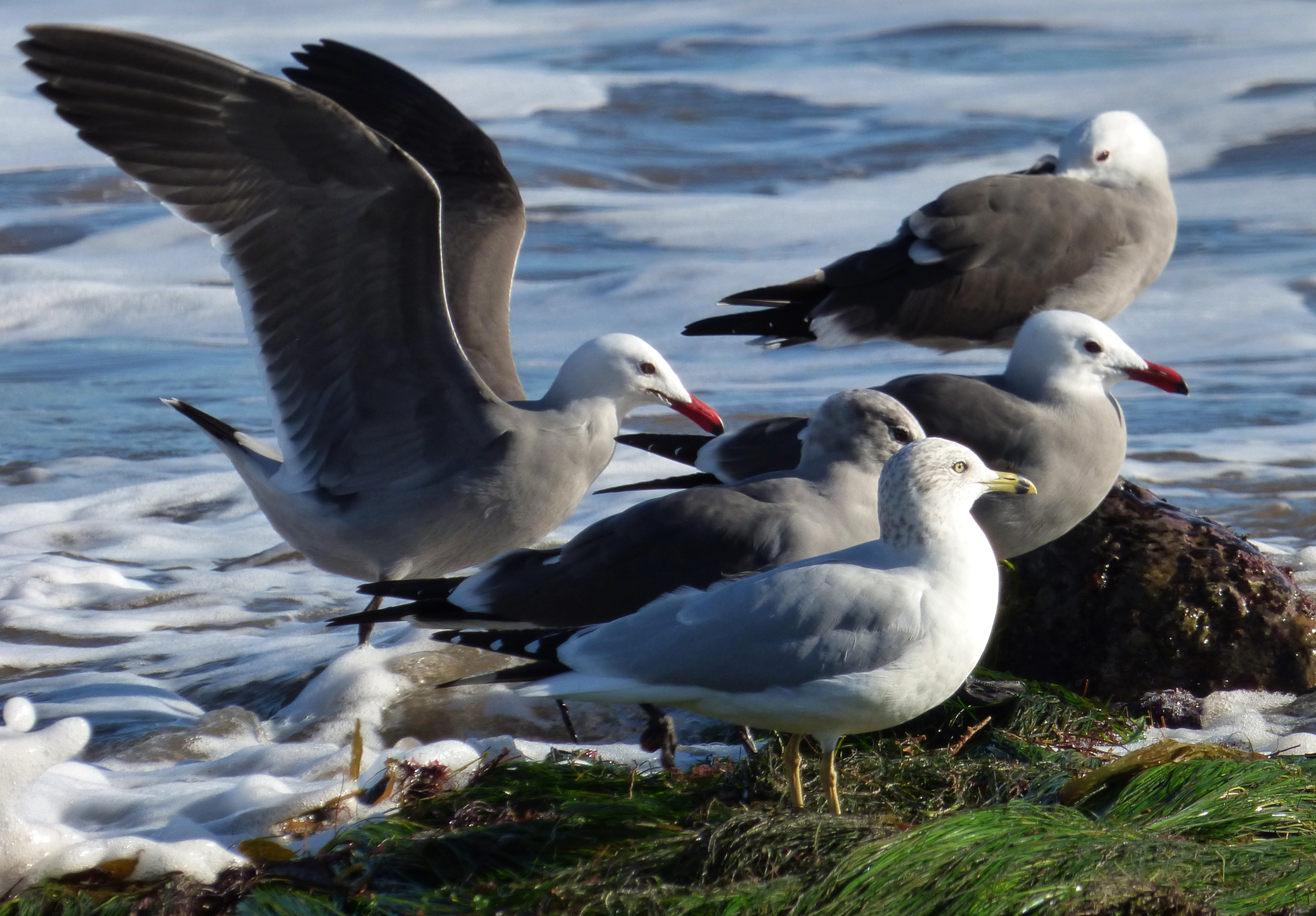 Shorebirds gather in large numbers on local beaches in winter. This group includes dark gray and white Heermann’s gulls and a much paler ring-billed gull. 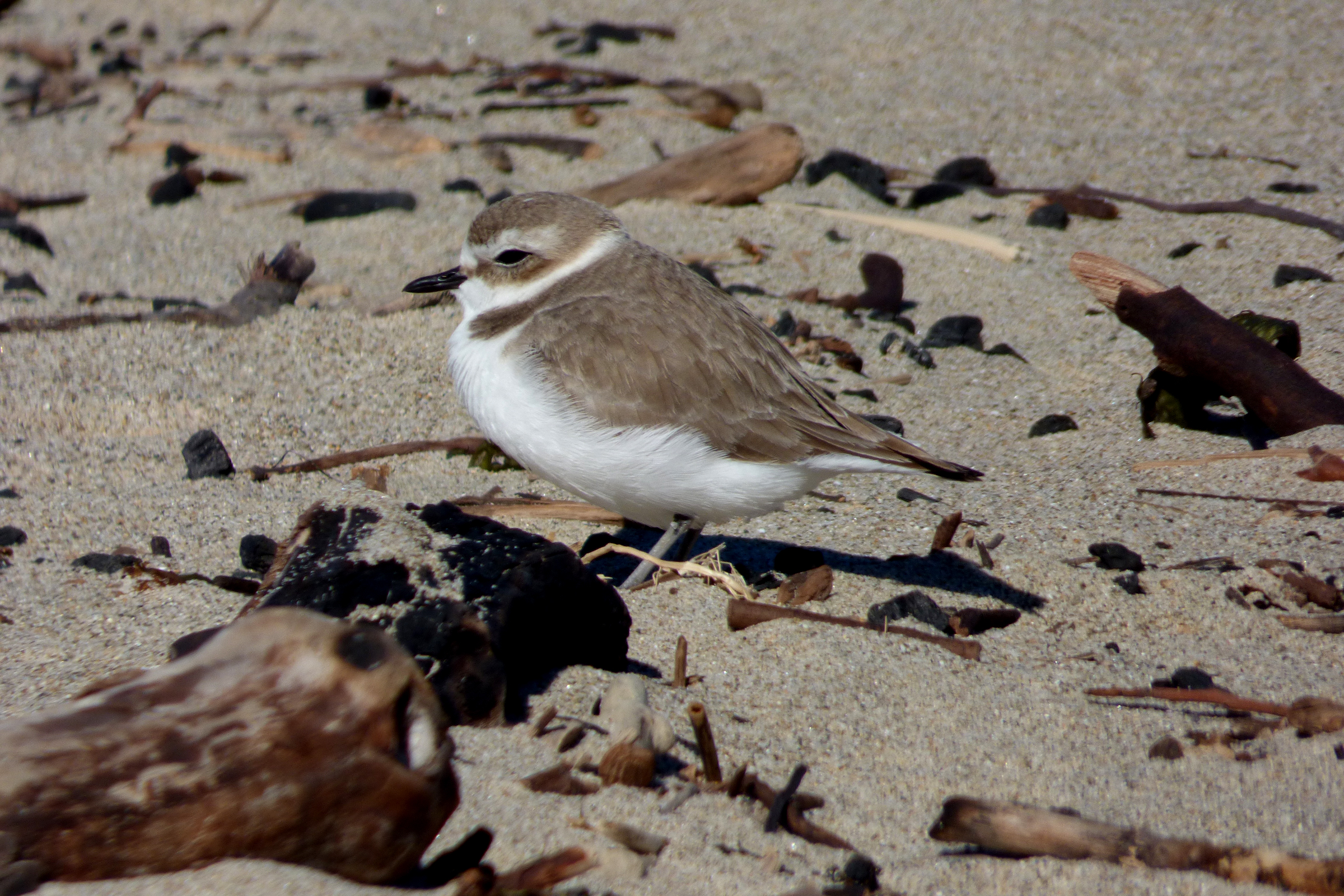 The snowy plover is another endangered species that makes its home on local beaches. This tiny bird has returned to his historic breeding grounds at the Malibu Lagoon and, with the help of human guardians to patrol and protect, has begun nesting on the beach again. The sand where this bird is standing is littered with char from the Woolsey Fire, but that may be more a boon than a liability for this little bird, which hunts kelp flies and other invertebrates among the tidal wrack on the beach.

February’s full “supermoon” will generate “perigean spring tides,” the highest and lowest tides of the year that bring migrating species to the coast and humans to the beach to observe marine mammals and explore an amazing intertidal world that is only fully revealed during the lowest tides of the year. Winter tides will also clear out some of the massive debris from post-fire rains.

January’s full “Wolf” and “Blood” moon dazzled skywatchers with a combination of a lunar eclipse with a “Supermoon.”

February’s full moon won’t have an eclipse, but it will be the most super “supermoon” of the year. The term was coined, not by an astronomer but by astrologer Richard Nolle in 1979. It’s a superhero-style name for a full or new moon that comes within 90 percent of its closest approach to the earth. The technical term is “perigee,”  or more specifically, perigee syzygy. Perigee refers to the Moon’s closest approach to the Earth. The word syzygy is Greek, and means tied or yoked together. It refers to the Sun, Moon, and Earth in conjunction.

February’s Supermoon will bring the moon within 221,734 miles of the Earth, closer than the January Supermoon—222,274 miles—and will generate some of the highest and lowest tides of the winter.

When the full or new Moon, the Sun and Earth align in syzygy, the tidal force generated by the sun and moon reaches its peak, known as a perigean spring tide. The term “spring” comes from the way the water springs onto the land, not the time of year. It’s defined by NOAA as “waters that are higher than average, low waters that are lower than average, ‘slack water’ time that is shorter than average, and stronger tidal currents than average.”

For beach dwellers, the February full Moon’s potential to generate higher than usual tides is a concern, especially if the high tides coincide with winter storms or wave swell. For beachgoers, the corresponding minus low tides will open an amazing window on the hidden world of the intertidal zone.

Just like humans, birds also take advantage of low tide to explore the tide pools. It’s not uncommon to encounter great blue herons, snowy egrets foraging in the intertidal zone. Winter also brings migrant and seasonal shorebirds to the coast. This is also the time of year when migrating gray whales pass close to shore.

From February 18-20, the full supermoon will generate perigean spring tides. The highest tide, on Sunday, February 19, occurs at  7:46 a.m., and will be 6.8 feet above the mean, or average, high tide. The corresponding lowest tide, arriving exactly 6 hours and 12.5 minutes later, will be –1.7. Two feet, or even seven, may not seem like much, but imagine the power necessary to move all of the water in the entire Pacific ocean.

The height of the tides is influenced not only by gravitational forces, but by the geology of the ocean basins and coastline, and also by the weather. A low pressure system can increase the height of high tide, especially if the tide coincides with a storm or swell or with onshore winds. Calm conditions, high pressure and offshore flow can help reveal more of the intertidal zone during low tide.

Winter low tides traditionally attract beachcombers but this year, the impact of the Woolsey Fire, rather than a colorful array of intertidal marine organisms, is on display at many beaches.

Debris from the fire is impacting the intertidal zone at Point Dume, Malibu Lagoon, and Surfrider Beach. Driftwood, charcoal, and manmade flotsam washed out by the rains are everywhere, washing up even in areas that were not directly impacted by the fire.

It’s unclear if fire-related debris has impacted Malibu surf breaks, but the amount of sediment and debris deposited during the first of post-fire storms is impressive. At Leo Carrillo, the sediment deposited by the creek has made the often-photographed offshore rock spires in the area, locally known as “Seccos,” surprisingly easy to access on foot at low tide. At Malibu Lagoon, entire trees have been swept down the creek, as have massive amounts of sediment. Tide-borne char and burned debris are even washing up at Topanga Beach, well outside the burn zone.

The rocky nearshore environment is often described as one of the most punishing ecosystems on earth. During low tide, species trapped within tide pools have to adapt to increased water temperature, low oxygen levels, exposure to the air, and predators. During high tide, intertidal animals have to hide from aquatic predators and find ways to stay anchored. Conditions change rapidly and sediment or even heavy surf can rearrange entire beaches within minutes.

Sediment is essential to prevent beaches from eroding, and the incredibly diverse intertidal biome has evolved to adapt to rapid change, including floods and fire debris. As painful as it may be for humans to observe the damage caused by the fire, the tide pools are expected to rebound.

Some of the best local beaches to observe tide pools and winter beach life include Topanga State Beach, Surfrider, El Matador, and Leo Carrillo—all are transformed by winter tides into a vast expanse of rocky pools.

A third supermoon will be arriving Thursday, March 21, bringing another opportunity to experience perigean spring tides.

While the post-fire winter beach offers a fascinating look at the aftermath of the fire, as well as opportunities for low tide beach walks and tide pool exploration, there are fire-related hazards that include barbed wire, building materials with nails in them, and unusually large amounts of broken glass. It’s a good idea to wear shoes while exploring.

It’s also important to keep an eye on the time. The tide turns quickly, and can leave the unwary explorer stranded on the rocks or in an inaccessible cove. NOAA’s excellent tides and currents webpage offers accurate and easy-to-use tide charts: https://tidesandcurrents.noaa.gov, and there are dozens of free tide apps.

The Right To Be Forgotten