Dave Sykes, 1942. Photo by Joe Quigg from The History of Surfing by Nat Young (1994), reprinted with permission from Gibbs Smith Publisher. 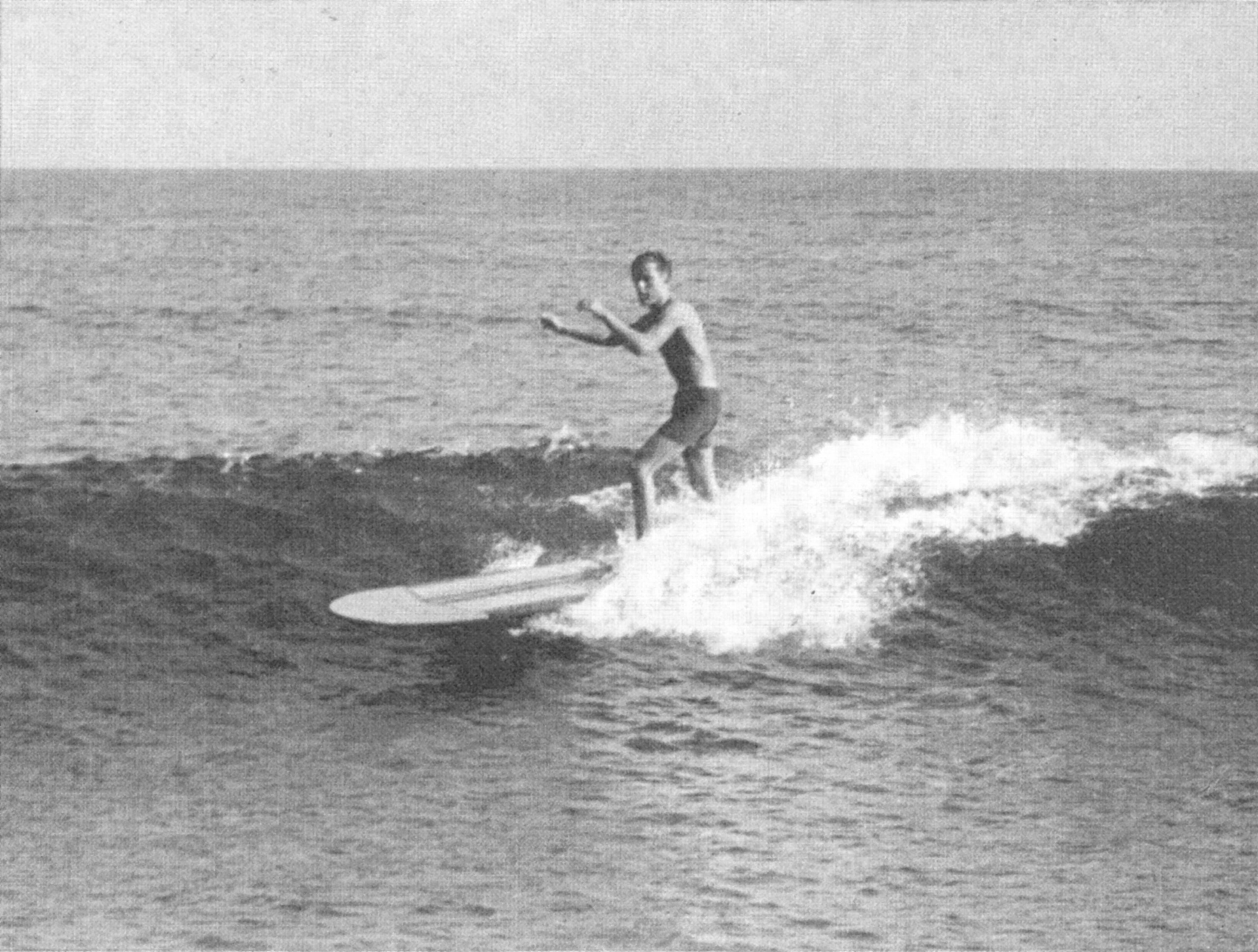 Dave Sykes at Malibu, 1946. When the Malibu boards came in, many surfers wouldn't give up their old San Onofre Style boards. They had Bob Simmons' “scarf and shape, balsa nose lift.” Photo by Joe Quigg from The History of Surfing by Nat Young (1994), reprinted with permission from Gibbs Smith Publisher. 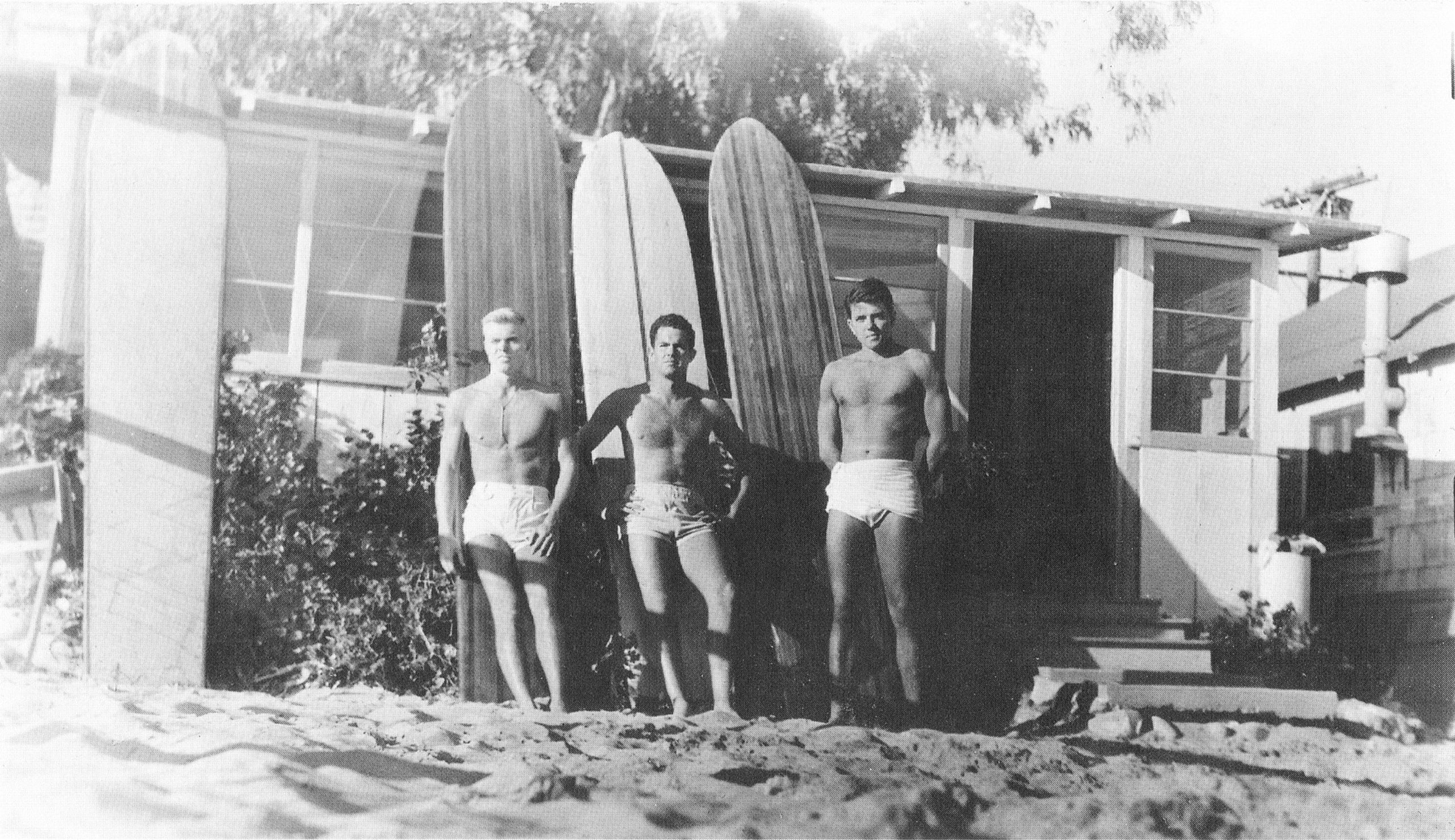 Ed Fearon, Don James and Jack Quigg at the house they rented on Topanga Beach, 1941 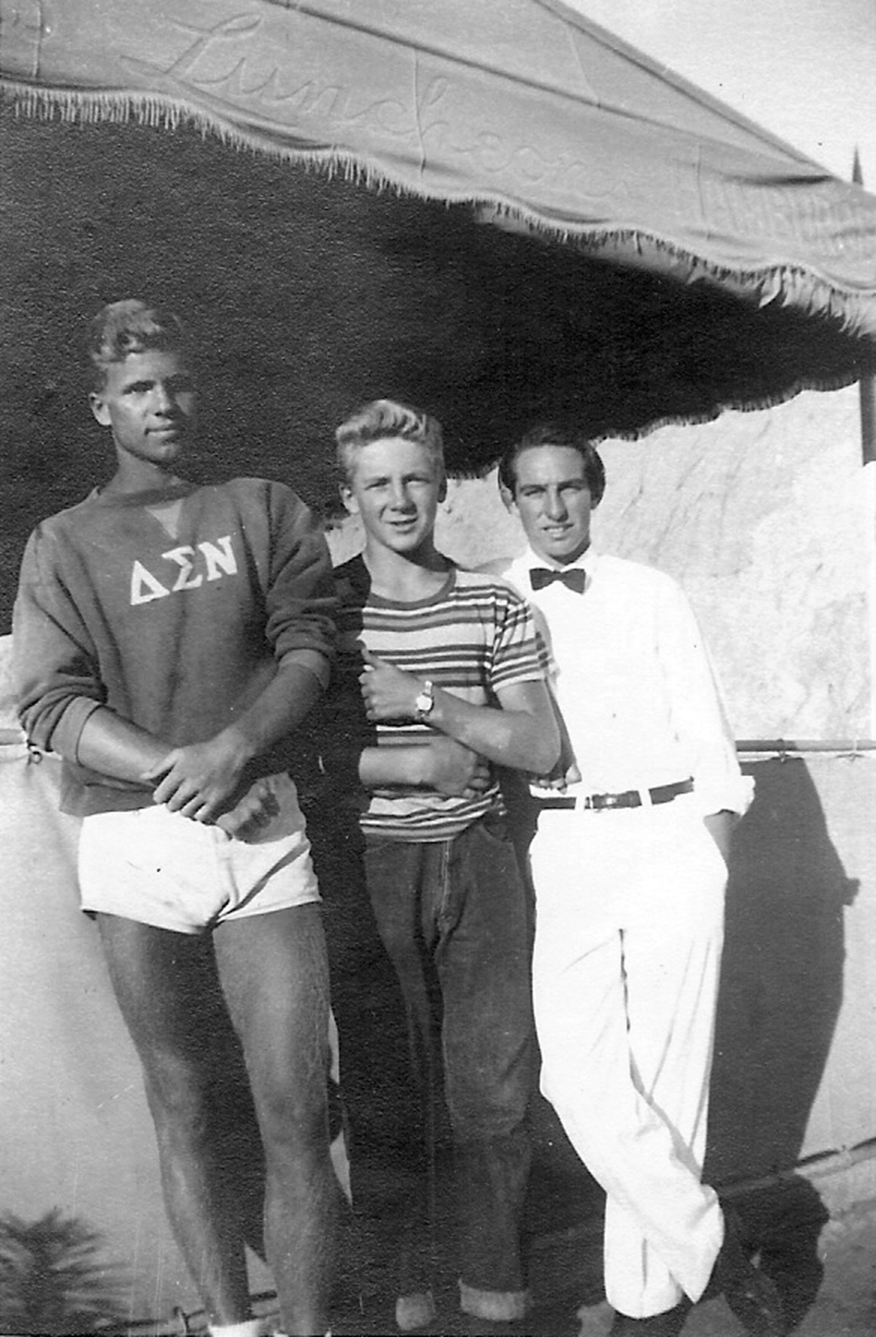 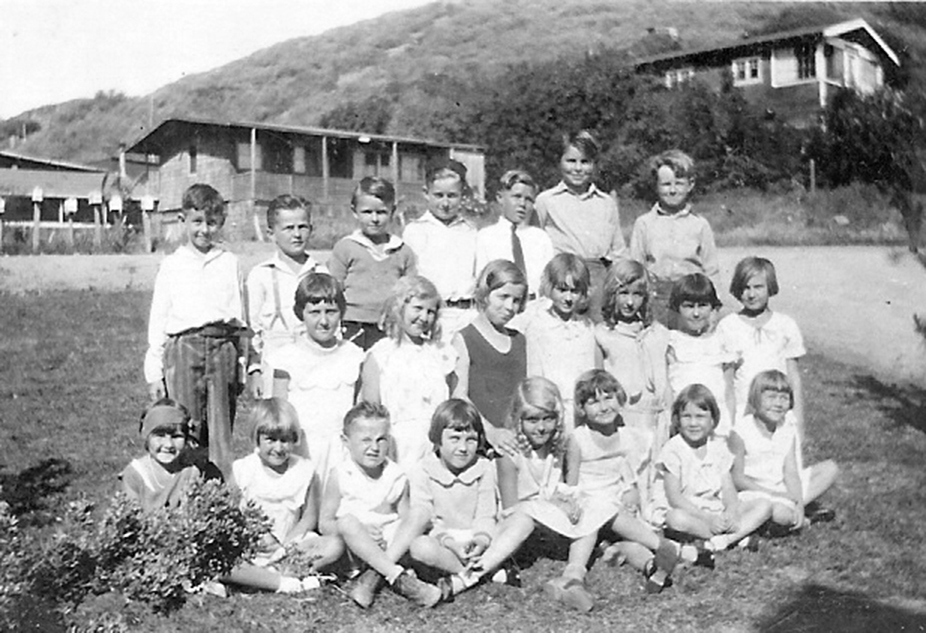 Early Topanga Beach residents endured tense times during WW II but had a front row seat for the birth of California’s surf culture. Their experiences were a key chapter in Topanga’s creative and colorful history.

In 2005, Topanga Messenger editor Susan Chasen and I interviewed the Rusts’ daughter, Thais (b.1925), about growing up in Lower Topanga. Her memories, many of which we published in the newspaper and re-published in The Topanga Story, presented a vision of our hometown so unfamiliar that it astonished us.

One of Thais’s earliest memories was watching the enormous German Graf Zeppelin fly by Topanga Beach on its 1929 trip around the world. A few years later, the zeppelin would become a symbol of Nazi propaganda and carry the swastika.

Thais also remembered the gambling ships of the 1930s, which would sometimes anchor off Topanga. They had to stay three miles from the coast to avoid U.S. laws.

Holiday fun was had at the annual “Webster Christmas Party for the Children of Malibu,” a 20-year tradition at Judge John L. Webster’s Malibu Courthouse that started in 1932, and drew hundreds.

A simpler ritual was collecting honey with painter Laura Way Mathiesen, who kept her bees in a side canyon that doubled as a shooting range for the police.

Thais’s favorite memories were of spending whole summers on the beach with her cousin Marilyn Kays, and neighbors Dick Carhart and Ida Lee Carrillo. Ida Lee was the daughter of Octavio (Ottie) and Bessie Carrillo, the niece of actor Leo Carrillo, and the descendant of one of California’s oldest Spanish families.

“We were at the beach probably from eight or nine in the morning ‘til five or six at night. It didn’t matter how large the waves were, we just had fun…. One day, Marilyn and I went with Ida Lee and her dad to the beach. The three of us got out beyond the waves, not knowing that there was a strong riptide. When we couldn’t get back to shore, Ottie called the Santa Monica lifeguards to rescue us. We were picked up just before Sunset Boulevard. We were having a great time, but Ida Lee’s dad was frantic.”

Other swimming options were the bathhouse of Alfred T. Stewart, rebuilt after the 1926 fire, nicknamed “The Plunge,” and the private swimming pool of actor/Olympian Johnny Weissmuller at Tuna Beach, where the neighborhood kids liked to jump in from the balcony.

Later, actress Natalie Talmadge lived in the Weissmuller house with her sons Joseph (James) and Robert (Bob). She legally changed their surnames to Talmadge to avoid being reminded of her famous ex-husband, Buster Keaton.

In the early 1940s, actors David Niven and Errol Flynn took over the house, with Bing Crosby and Paulette Goddard living on either side. In the mid-1940s, it became the Las Tunas Isle Motel. Today it’s a private residence again.

After high school, Thais became engaged to Bob Talmadge, but they broke up before the wedding. During World War II, she spent Friday nights scanning the sky for enemy planes from a lookout tower that was across the street from today’s Getty Villa. In the early 1950s, she was briefly married to a second beach resident, Dave Sykes (1926-2009).

However, a third man from the beach was destined to become her life partner, and surprisingly it was Dave’s younger brother, John (Jack) Sykes (1935-2017), whom she married in 1956.

Jack, Dave, and their sister Beverly were the children of Sherman and Gladys Sykes, who owned a bar called The Glen, in Beverly Glen. It had a reputation for being tough, and Sherman carried a gun that he would sometimes leave out on the table. Their house had a gangplank that led onto the sand. When it was pulled up, it covered the door to keep big waves from splashing in.

Chasen and I simultaneously interviewed Jack, and he shared vivid memories of what Topanga Beach was like during World War II.

By then, the gambling ships had been outlawed, but the Air Force kept an abandoned ship moored off Topanga for target practice. The hills along the coast were full of artillery. It was a common sight to see 100 army vehicles at a time driving down the highway in convoy. At night, drivers kept their headlights off, and a Blackout Warden fined houses where light was visible.

The Coast Guard had a headquarters at Sunset Blvd., and patrolled the coast on foot every evening, passing by Topanga Beach with bayonets and German Shepherds. Sometimes the army closed the beach to play war games.

On either side of the lagoon, machine gun nests were placed on dirt mounds. One was in front of Jack’s house.

“They dug a big hole in the sand, and had soldiers in there. I would bring them cookies from our house, and my dad got so mad at me. I was taking all our stuff out for these guys to eat.”

Contrasting with the wartime grittiness was the glamour of Jack’s celebrity neighbors, like actresses Greta Garbo, with whom he took walks, and Shirley Temple, who occasionally asked his dad for a ride to town.

Jack was also surrounded by icons of early California surfing, which included his brother.

“[Dave] Sykes was the best surfer I had seen at that time because he lived there and surfed all day, every day. He could just glide and glide.” (Joe Quigg, “The Archivist: Turning Points,” The Surfer’s Journal, September 19, 2017)

“Topanga dweller Sykes’ finely honed speed lines and turning were years in advance of others. Sykes delighted in [perfectly] planing surfaces and placed 15 layers of hand-rubbed lacquer over his boards creating a hard-shelled outer surface many years before the discovery of fiberglass and resin.” (Craig Stecyk, The Surfer’s Journal)

The Malibu Point was first surfed in September 1927, when it was still a private ranch, by Tom Blake and Sam Reid. We don’t know who first surfed Topanga, but it would make sense for Tom and Sam to have tried it before Malibu. Reid is often quoted as saying that “there were only six surfboards in the entire United States” when he graduated from Santa Monica High School in the early 1920s.

Although Reid’s count was meant more to give an impression, two of those “six” surfboards belonged to brothers John E. O. (1915-1990) and Jim Larronde (1917-1989), who had them engraved with their initials in Hawaii and shipped to their parents’ Topanga Beach vacation house (John’s redwood surfboard is now in the Museum of Ventura County). In the late 1930s, a transition balsa-redwood surfboard was called the Larronde Model. In the late 1940s, John made a 16-minute home surf movie, popularly known as “Sweet Sixteen”, of trips he took between Malibu and Santa Barbara.

Their father, Pedro Larronde, supposedly built their beach house in 1917, just after the prison camp closed. He may have been given this privilege because his brother John M. Larronde was an executive of the Title Insurance and Trust Company, who owned the land before the Los Angeles Athletic Club  (LAAC). Or it may have happened because their grandfather, Pierre, had been the legal guardian of future-Sheriff Eugene Biscailuz’s Uncle William, who was also of Basque ancestry.

Pedro was an executive of the Franco-American Baking Company, and a member of the Los Angeles Athletic Club. For some reason, his wife, another Gladys, was forced to move their beach house across the street to Old Malibu Road when the LAAC took ownership in the mid-1920s.

The Larronde house was bulldozed, along with the Rust house and the rest of the neighborhood, when State Parks took ownership in the mid-2000s.

More than just a random surf pack, this group is actually noted for evolving the sport with their skill, precociousness, and other contributions. James was California’s first dedicated surf photographer; Simmons and Sweet were influential shapers; Miller was an early surf filmmaker who transitioned to ski filming, a passion which he traced back to a freak snowstorm at Topanga Beach.

“Many people and businesses change forever because of a simple event. Mine changed on the beach at Topanga Canyon in 1929. It had snowed about an inch the night before and as I walked barefooted in ankle-deep warm ocean water, I stepped out onto the snow and a kind of visceral feeling happened that to this day is impossible for me to explain.” (“Nostalgia,” Idaho Mountain Express, January 22, 2010)

Kivlin was considered to be the best California surfer of his generation, and Kathy (Gidget) Kohner caught her first wave on his board, which led to an explosion in surfing’s popularity.

The Cole brothers opened a primitive surf shop at the gas station. Peter later moved to Hawaii to become a big-wave rider, and Corny became the art director of Topanga Beach’s own Surf Guide magazine.

World War II interrupted the lives of many of these young surfers but offered unexpected opportunities for the Rust women. Thais followed her mom into the aerospace field, getting her first job at Douglas Aircraft. She went on to work at the RAND Corporation and the Planning Research Corporation.

Jack was too young to fight in World War II but embarked on a military career anyway when he came of age. He then worked as a plumber and eventually started his own company. Jack and Thais raised two daughters, Lisa and Lori, and retired in Orange, CA.

Prohibition Didn’t Work but This Defunct Amendment Is Still Relevant