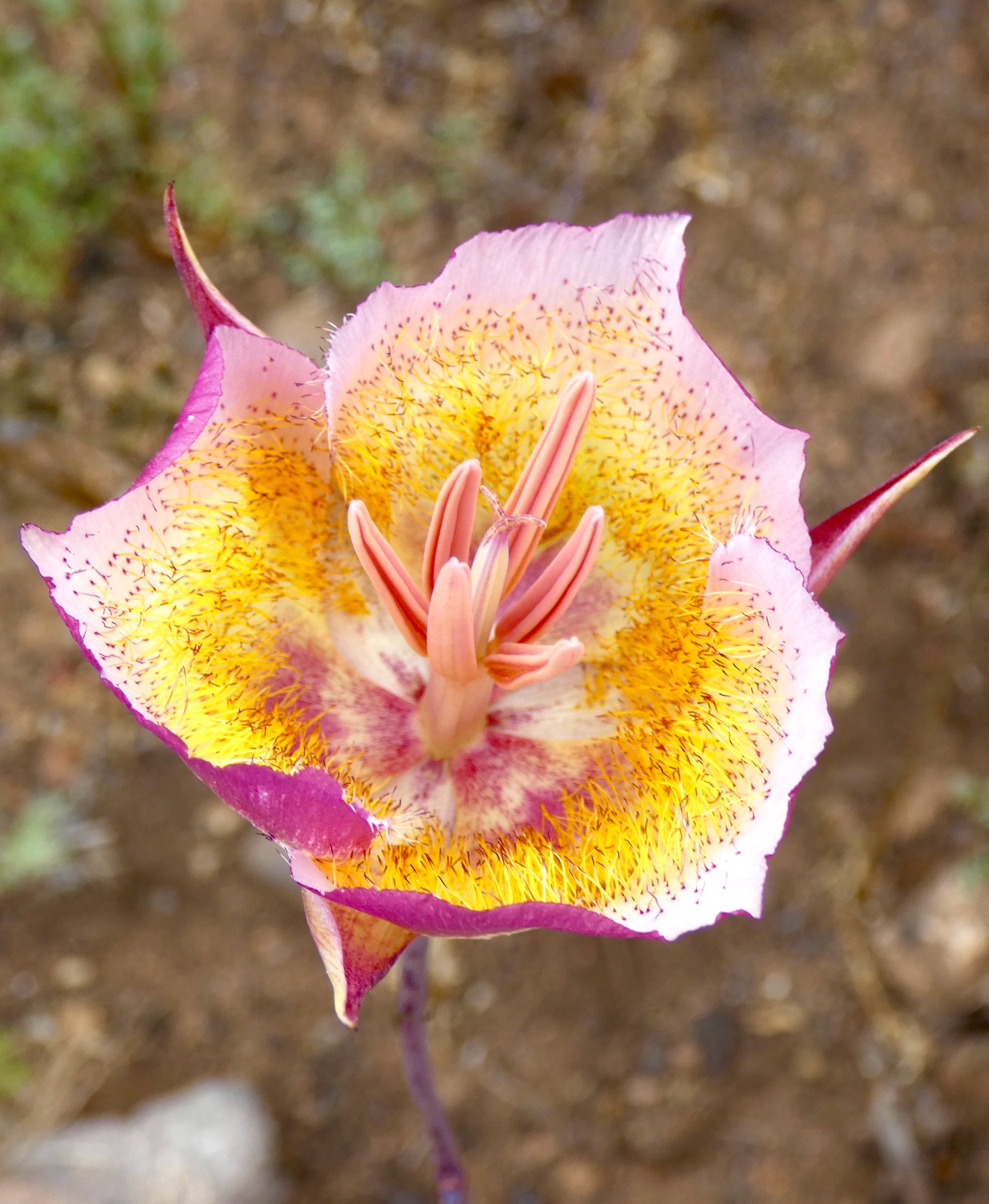 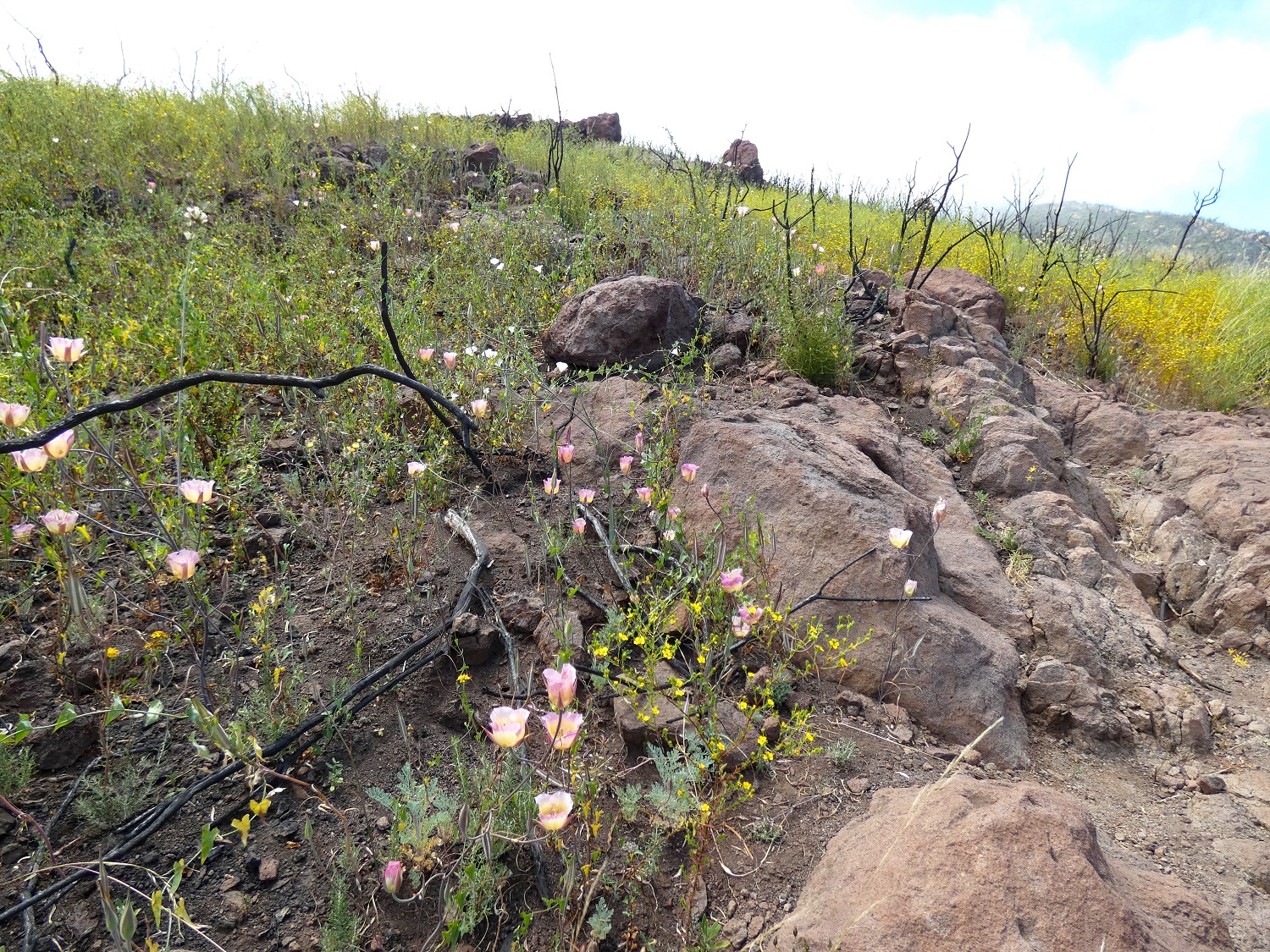 A field of Plummer’s Mariposa Lilies in all their unexpected glory was discovered growing in the Woolsey Fire burn scar near Sandstone Peak. Photos by Suzanne Guldimann 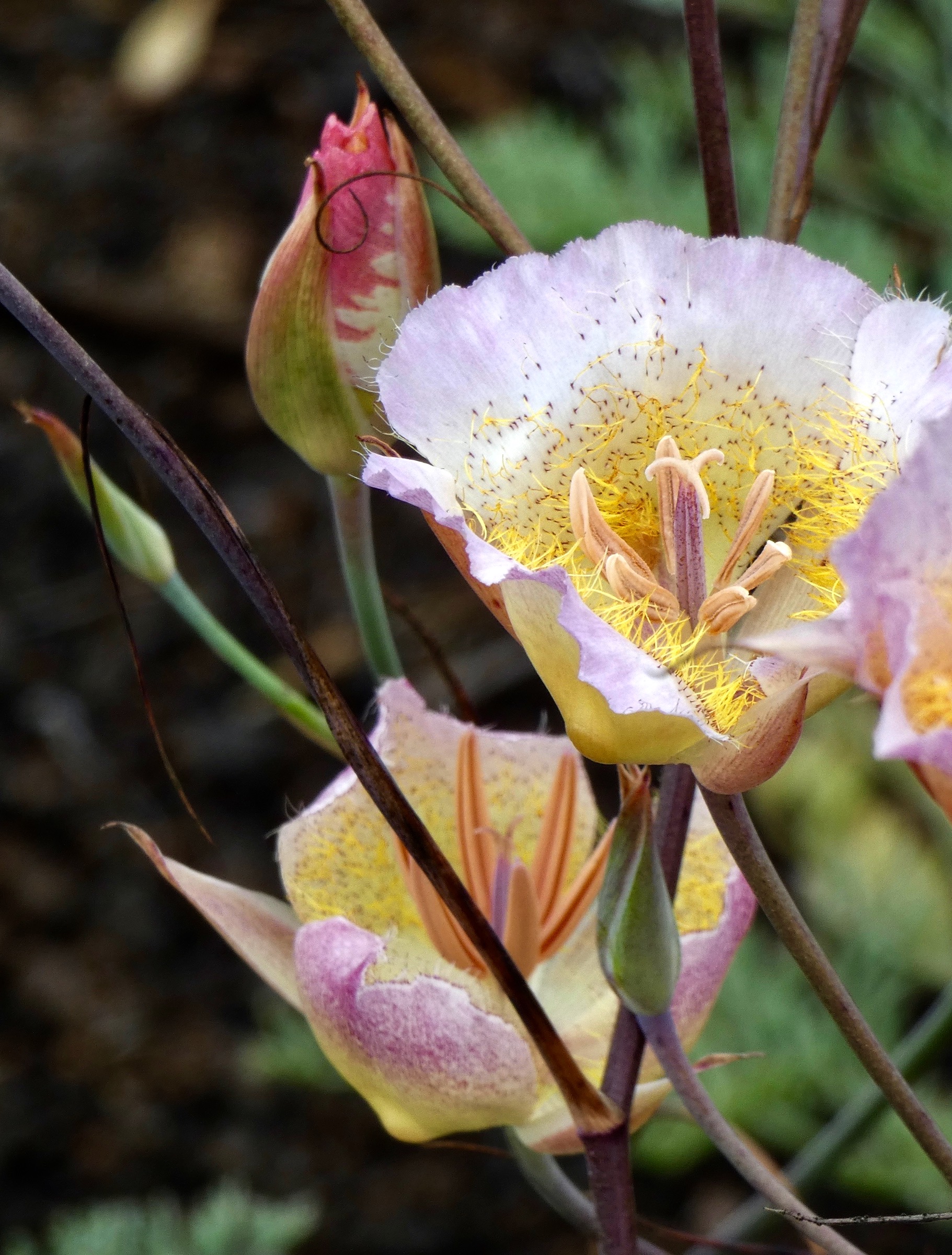 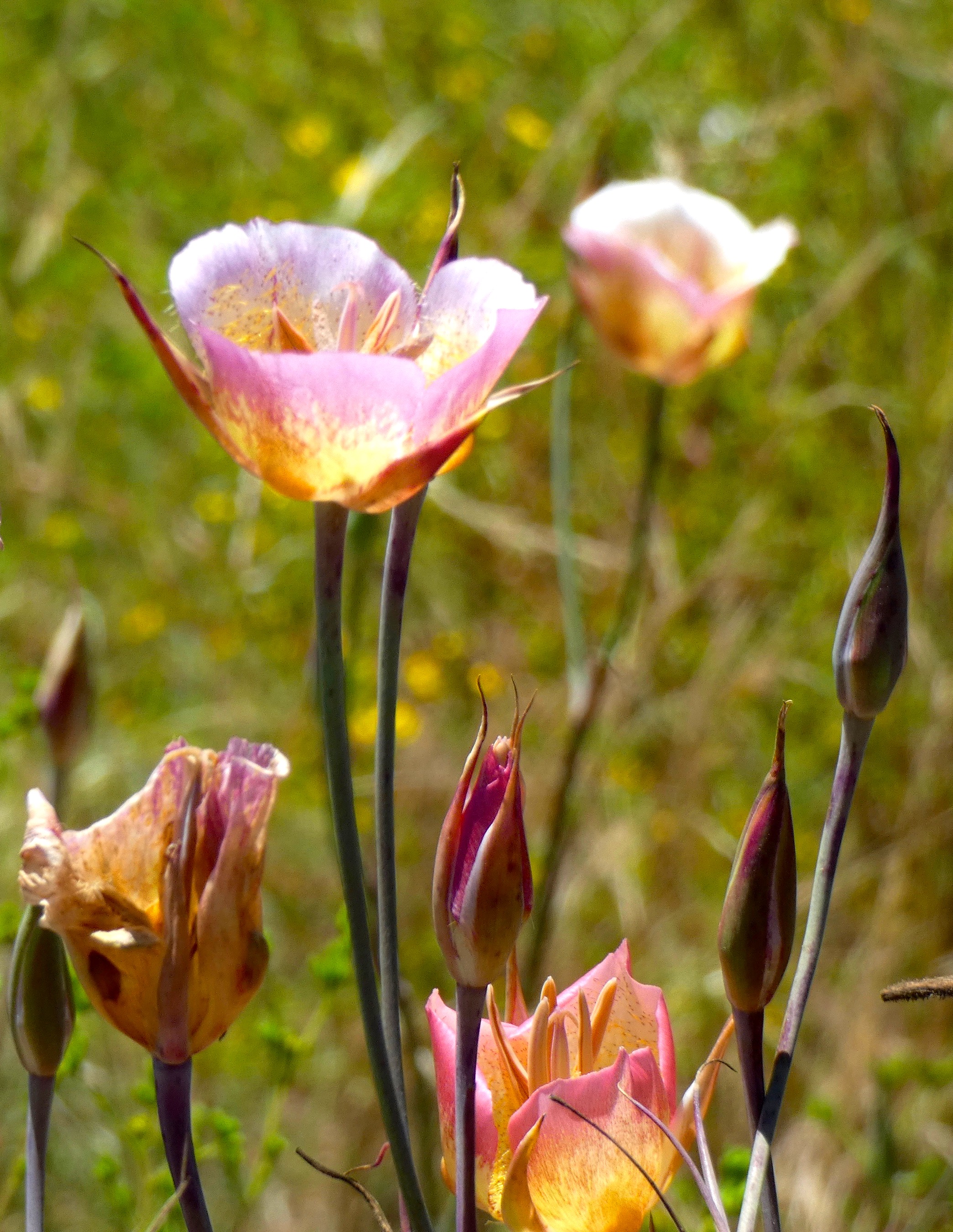 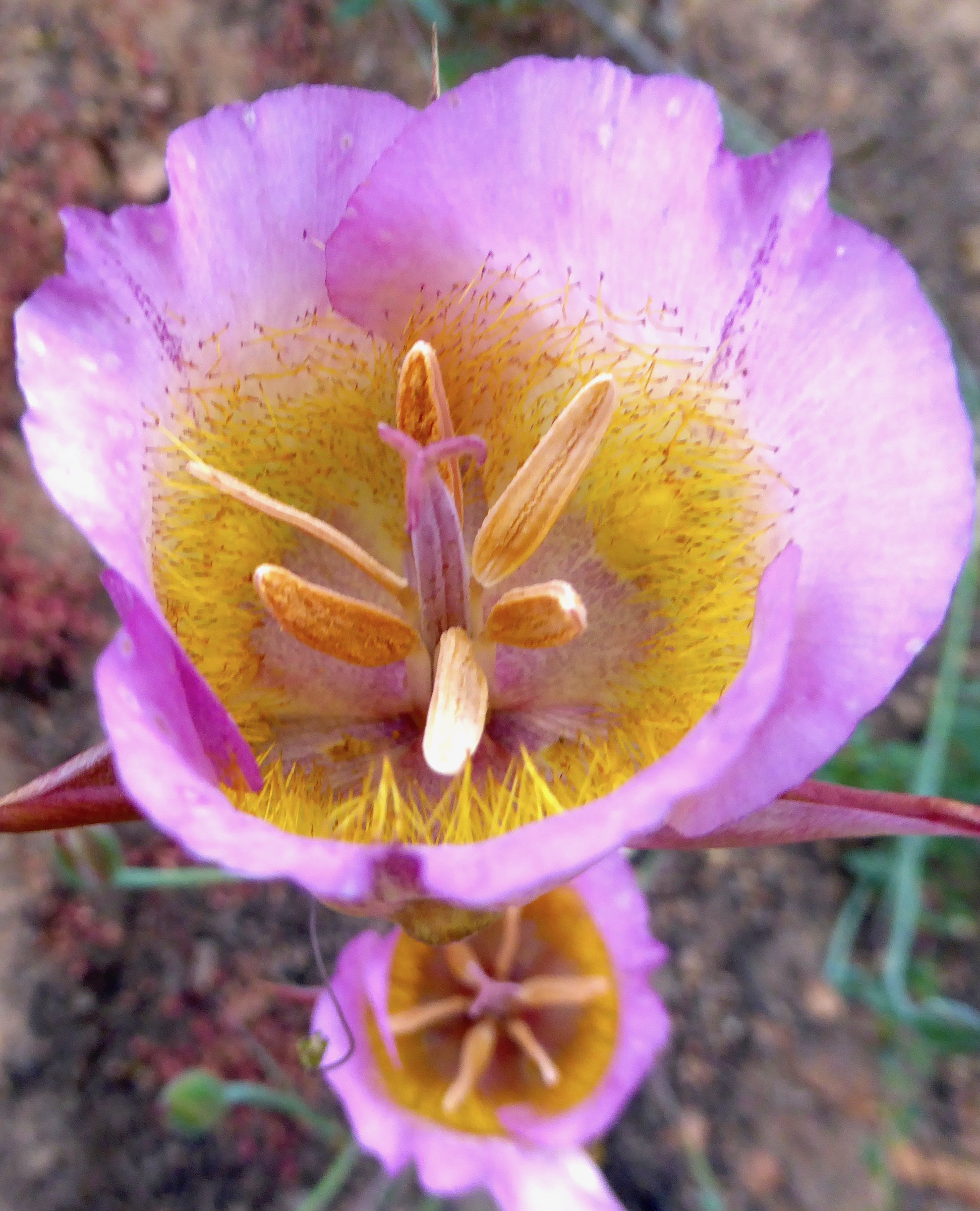 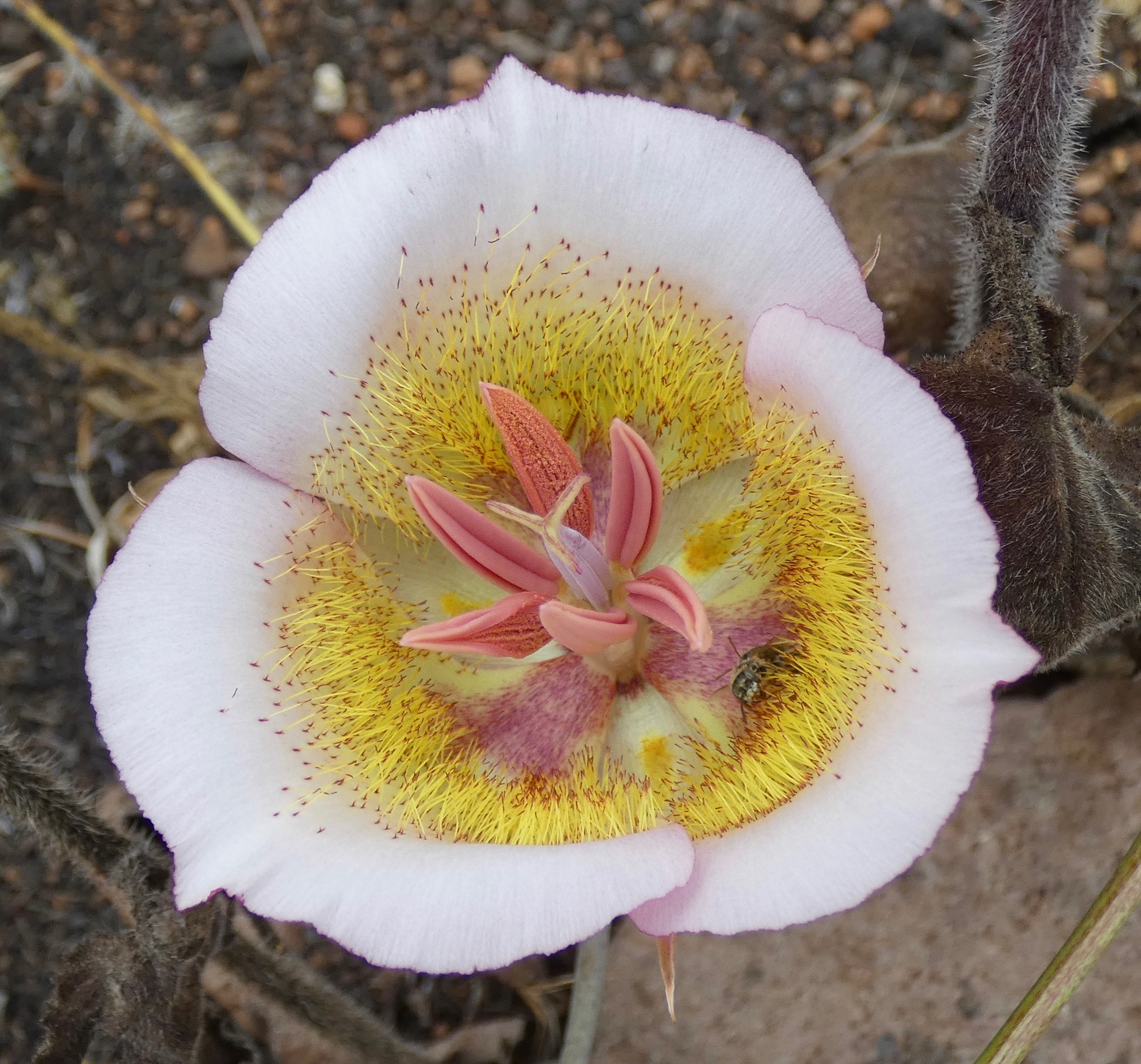 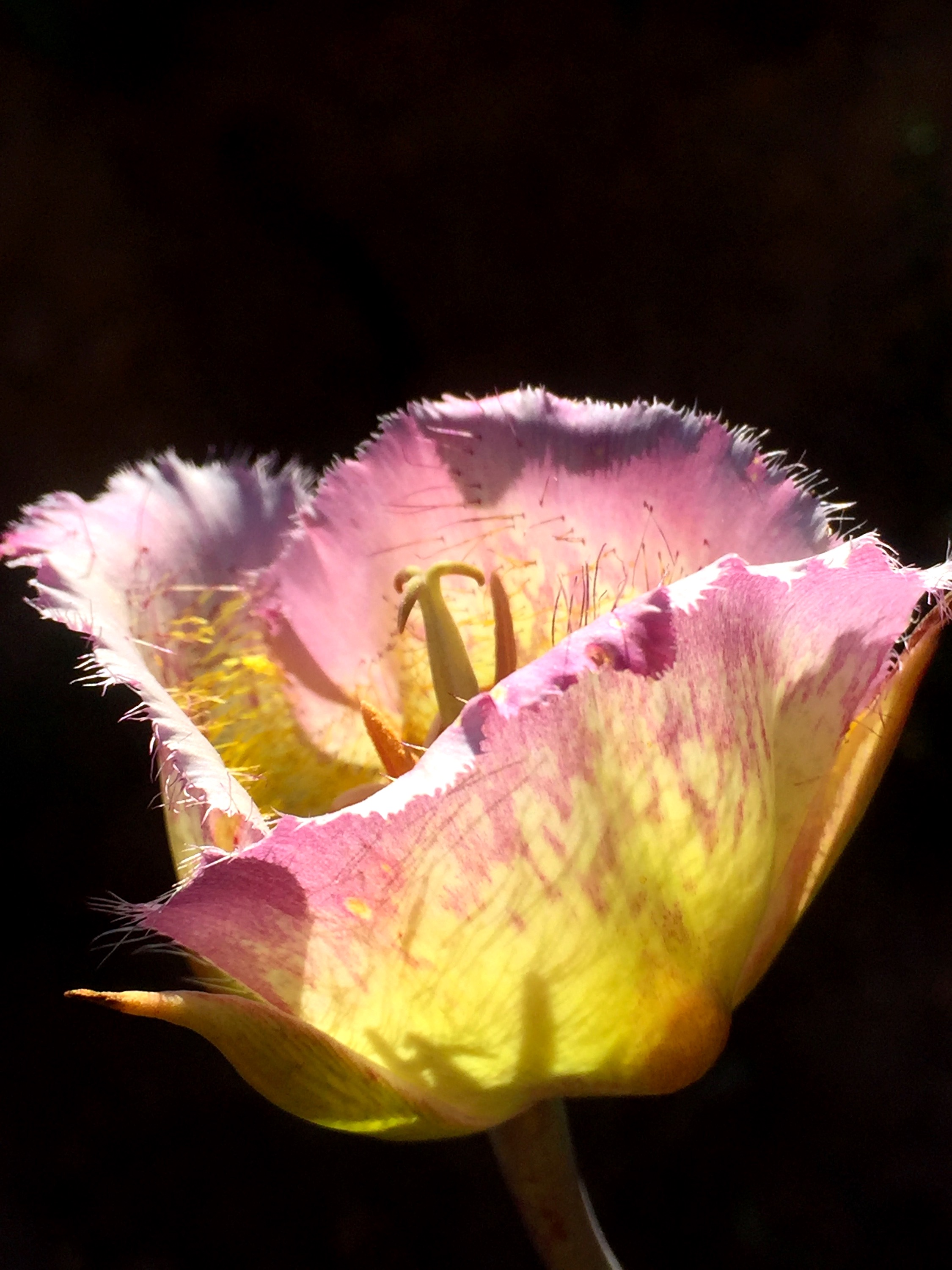 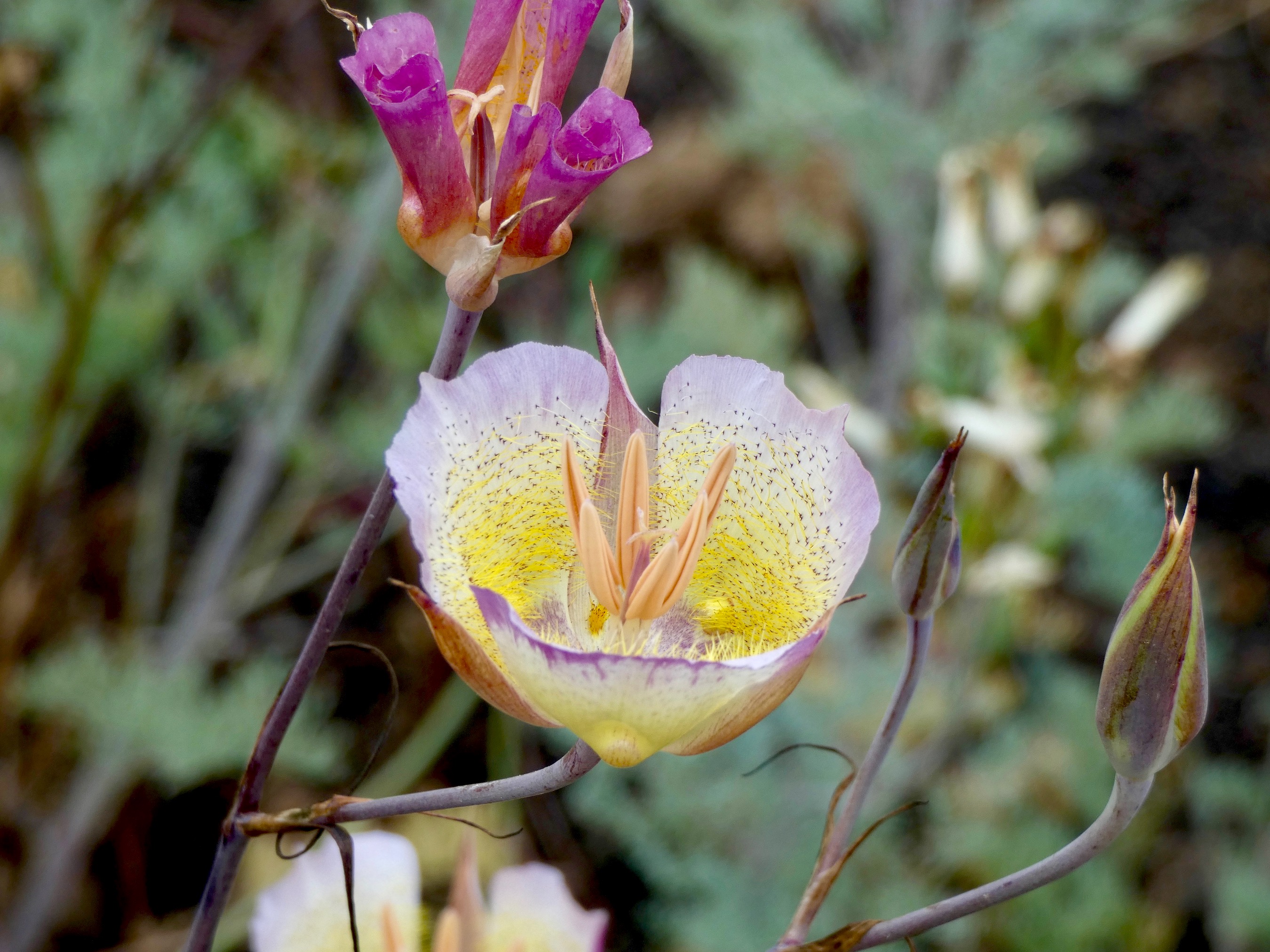 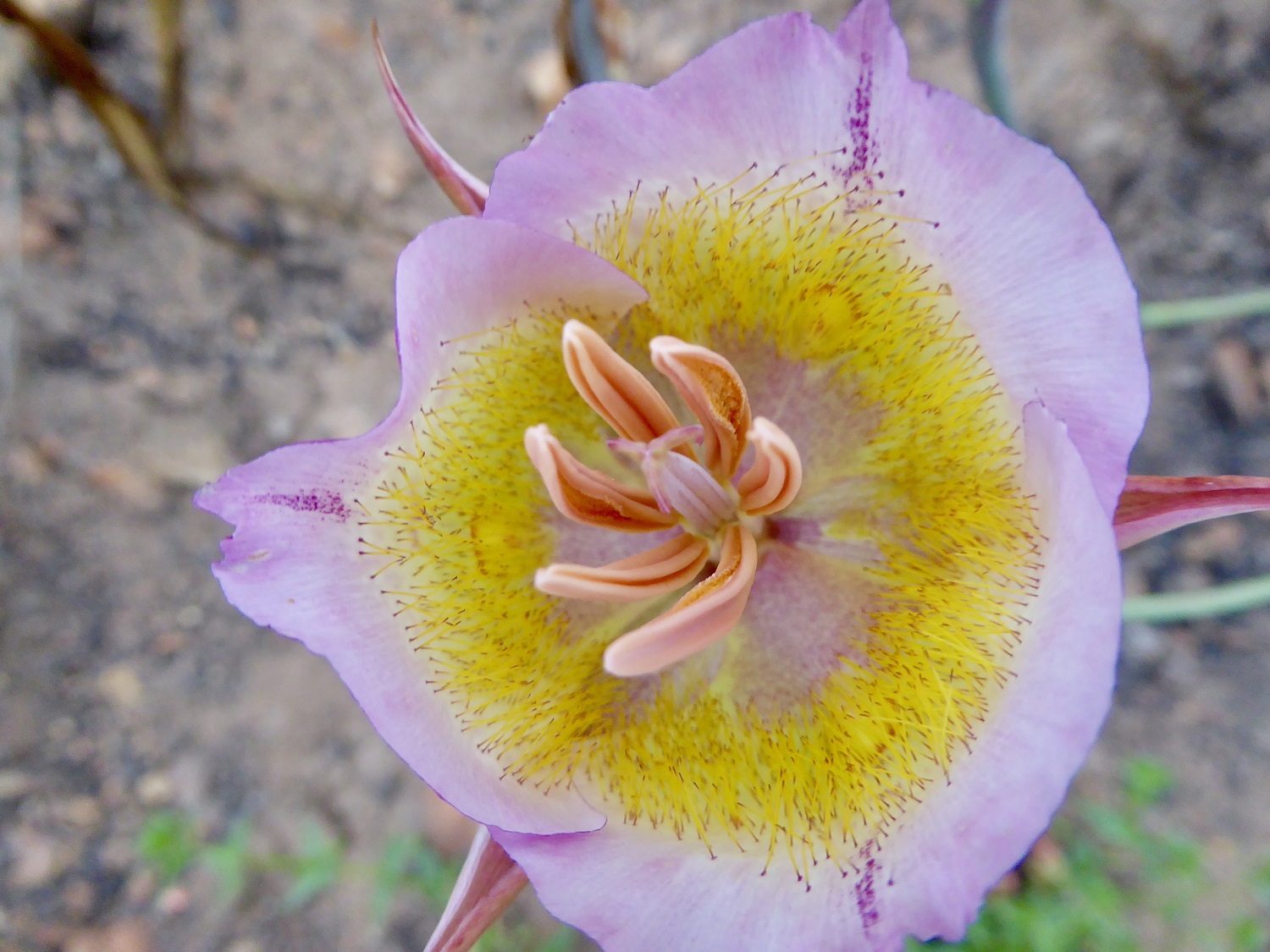 The woman this flower was named for was an equally rare example for her time when a woman’s place was in the home, not on top of a mountain or in the middle of a desert.

For many local wildflower enthusiasts just seeing one Plummer’s mariposa lily is cause for celebration.

This year, there are thousands of this rare flower in bloom as it is the last member of the showy Calochortus family to appear, thanks to the abundant rains that encouraged a phenomenal show from this usually scarce flower.

Plummer’s mariposa flowers range from pale pink to raspberry red, with a band of yellow that can be pale cream or bright gold. The interior of each tulip-like blossom is covered with colorful hairs that give it a distinctive “furry” appearance. This plant is a bee magnet. Nectar glands—one on each of the flower’s three petals, visible as small round bulges—tempt pollinators deep into the flower.

Mariposa means “butterfly” in Spanish. Calochortus is Latin for “beautiful grass,” a reference to the plant’s silvery, grass-like leaves. Both the common and scientific names for the species are descriptive, but “Plummer” seems like a prosaic name for this dazzling flower.

However, Plummer’s mariposa, Calochortus plummerae, is named for Sara Plummer Lemmon, a respected nineteenth-century American botanist who was anything but prosaic.

Born in Maine in 1836 to parents who were progressive Unitarians and believed in education, she was sent, not just to school but to college. She earned honors in chemistry and physics at Greenleaf Female Institute in Massachusetts, then won a three-year scholarship to Cooper Union for the Advancement of Science and Art, a progressive college in New York City that was founded on the principle that higher education should be open to all.

Plummer volunteered as a nurse during the Civil War, then headed west at the age of 33, hoping to improve her failing health. She traveled to California alone and settled in Santa Barbara, where she started one of the state’s first lending libraries; established a nursing school; became a founder of the Pacific Slope branch of the Red Cross; and developed a passion for botany.

In 1880, at the age of 44, she married botanist John Lemmon, hitched up her skirts and hiked all over the West in search of plants, in an era when a woman’s place was in the home, not on top of a mountain or in the middle of a desert.

Plummer studied ferns, marine botany, algae, and trees, and wrote monographs on her observations. She taught herself scientific illustration and became the official illustrator for the California State Board of Forestry, and the second woman invited to join the California Academy of Sciences.

Plummer was an early advocate for forest conservation, and campaigned for nearly 10 years to make the golden poppy the state flower of California, finally succeeding in 1903.

Calochortus plummerae, the flower that bears her name, is an endemic species that is limited to a relatively small section of Southern California’s transverse mountain ranges. The California Native Plant Society lists this plant as “fairly endangered,” and it is truly rare to see so many.

When the Messenger Mountain News reporter was in the field looking for plants to photograph for this article she met another wildflower enthusiast. “I’ve been counting the flowers,” the woman said. “I’ve seen more than a hundred plants, one of them had 20 flowers on it. I’ve looked for this flower every year for almost 30 years. Before this season I’ve only ever seen three.”

Plummer’s mariposa lilies are in abundant bloom throughout the Woolsey Fire burn zone, but they can also be spotted in areas that did not burn, including Tuna Canyon Park and Topanga State Park. Look for this rare beauty in clearings among the chaparral and sage scrub, and on dry, rocky slopes.