The Way We Were
September 20, 2019
by Suzanne Guldimann 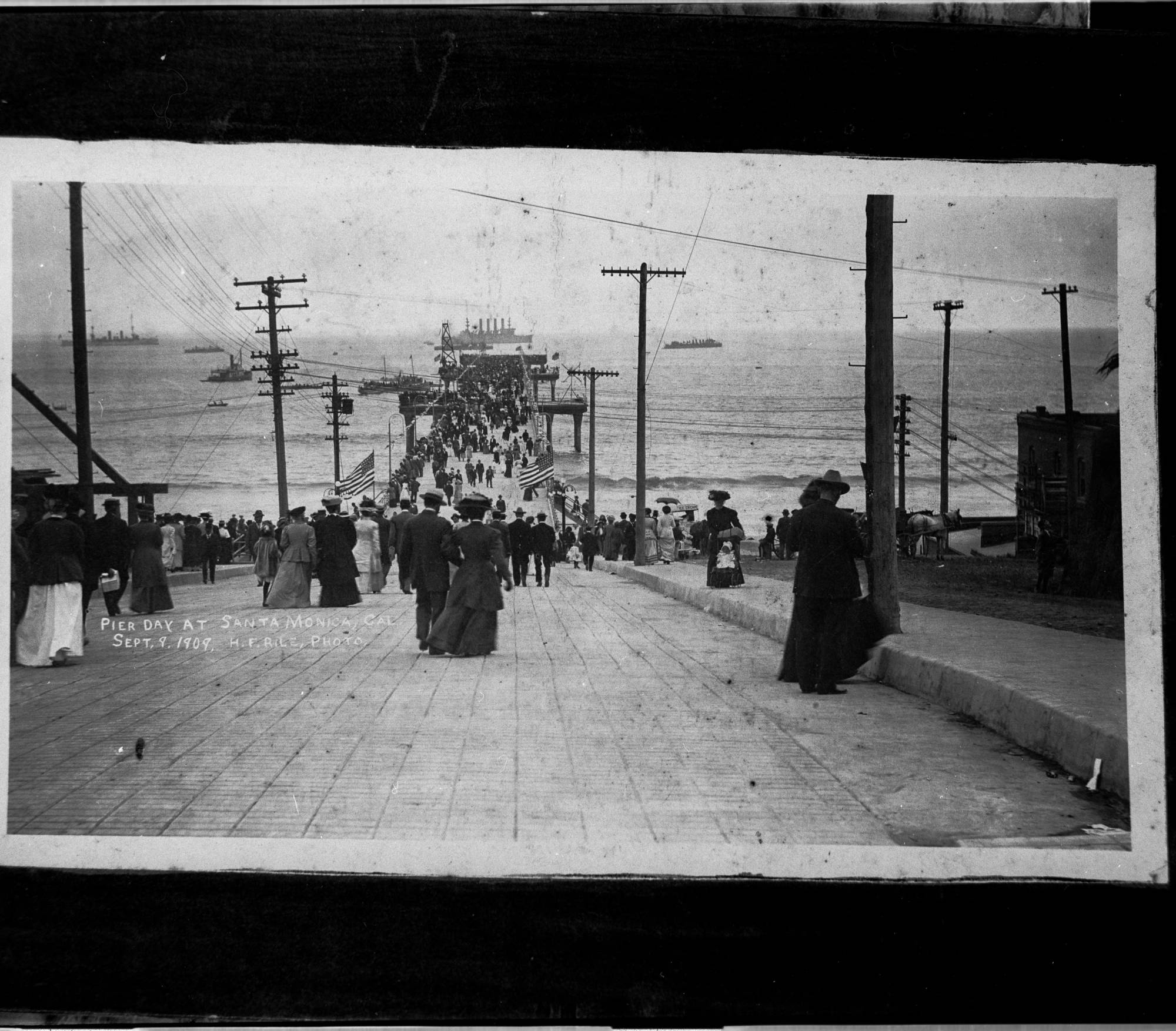 Ladies in long dresses pause to admire the view on “Pier Day,” the grand opening of the Santa Monica Pier on September 9, 1909. The festivities included fireworks, a concert, a guest appearance by celebrity lifeguard and pioneer surfer, George Freeth, and a tableau vivant with a sea monster, fairies, mermaids, which featured King Neptune being vanquished by Lady Santa Monica, and leaping into the sea in flames. All photos courtesy of the Ernest Marquez Photographic Collection, Huntington Digital Library 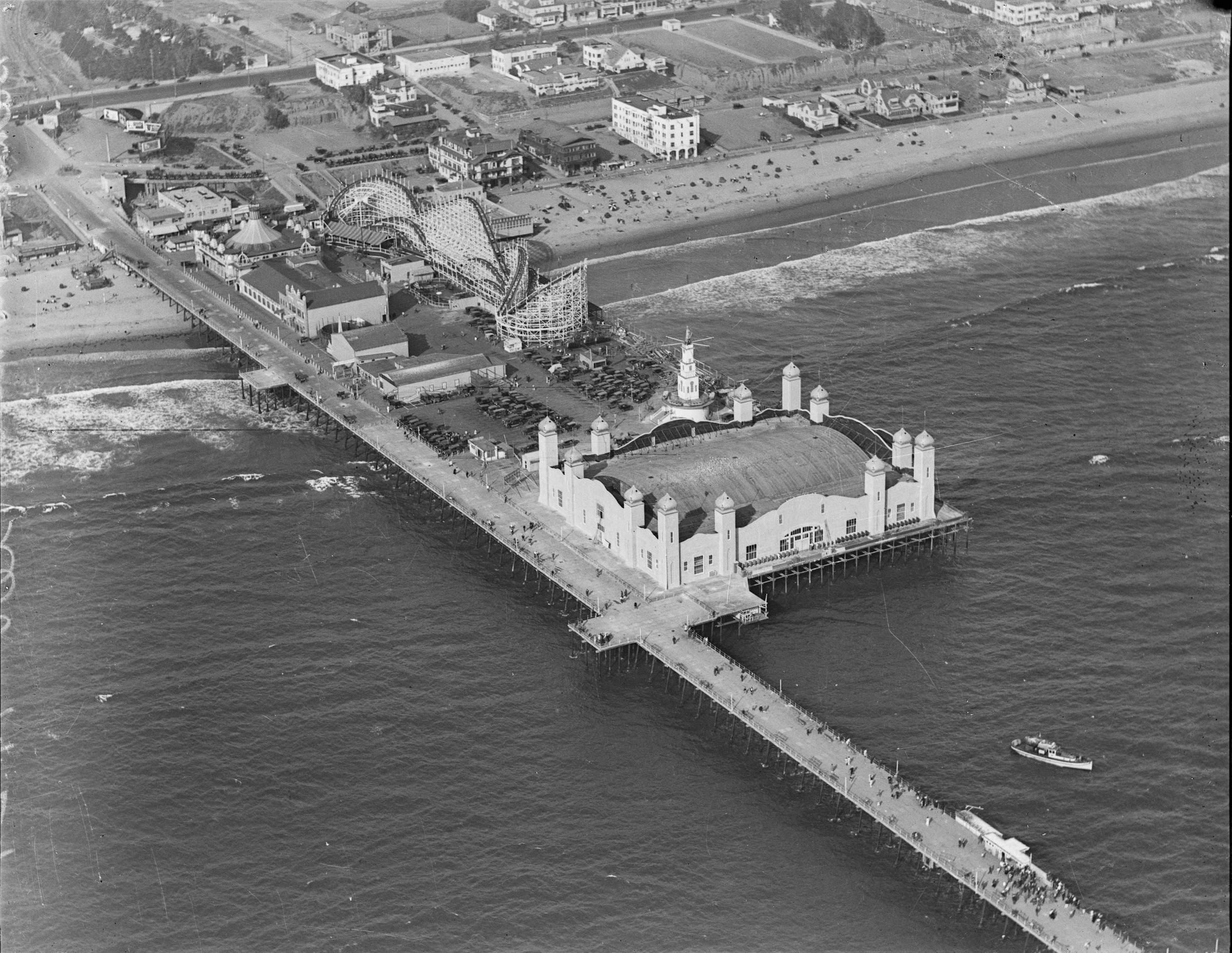 This aerial photo, c. 1924, shows the Santa Monica Pier at the apex of its golden era. The Arabian Nights fantasy castle at the end of the pier is the La Monica Ballroom. Both rollercoasters and the Looff Hippodrome, are also visible. 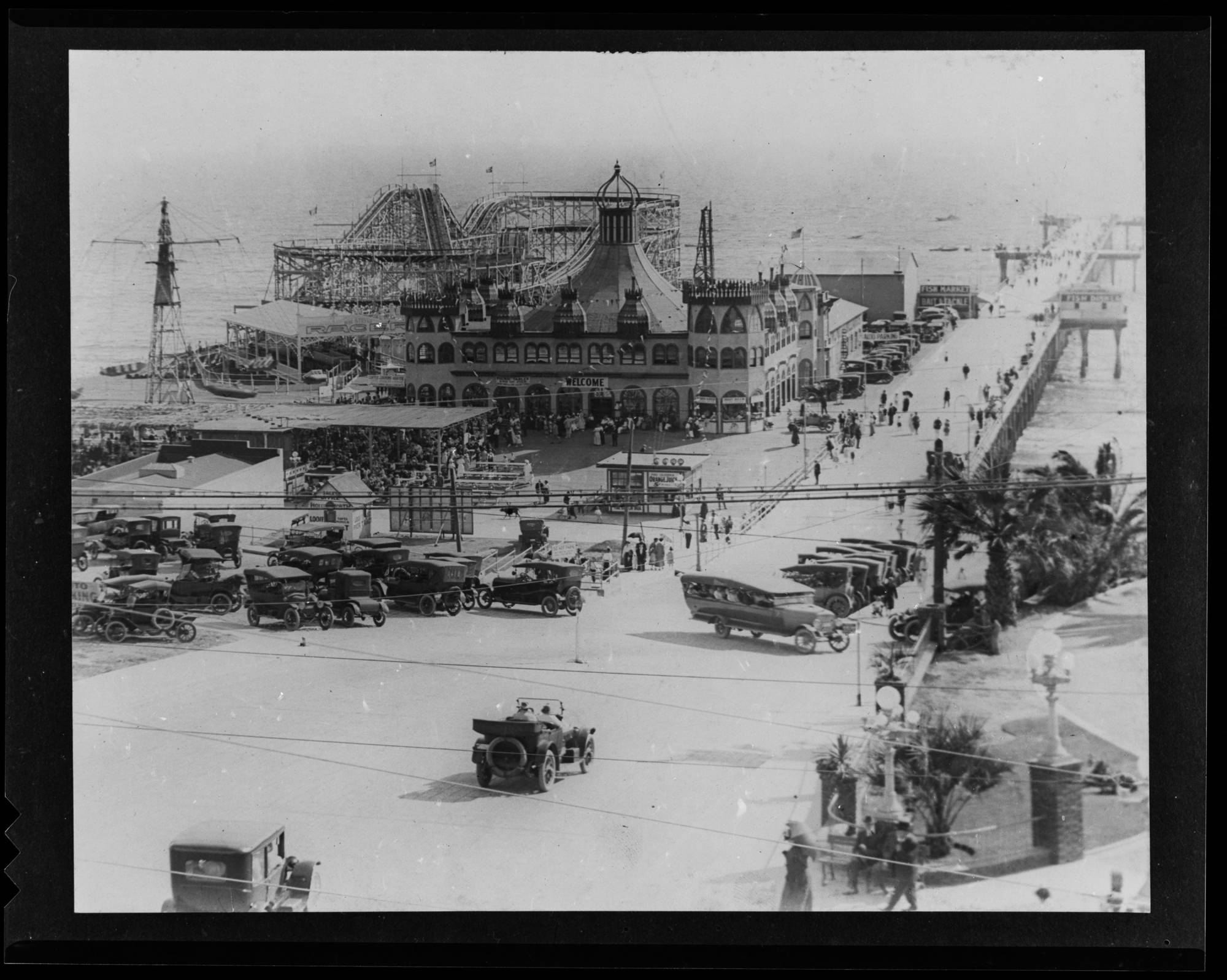 The Santa Monica Pier in 1917, with the Hippodrome in all its tower-bedecked fanciful glory. The building, famous from years of use as a film and television set location, is now a National Historic Landmark. 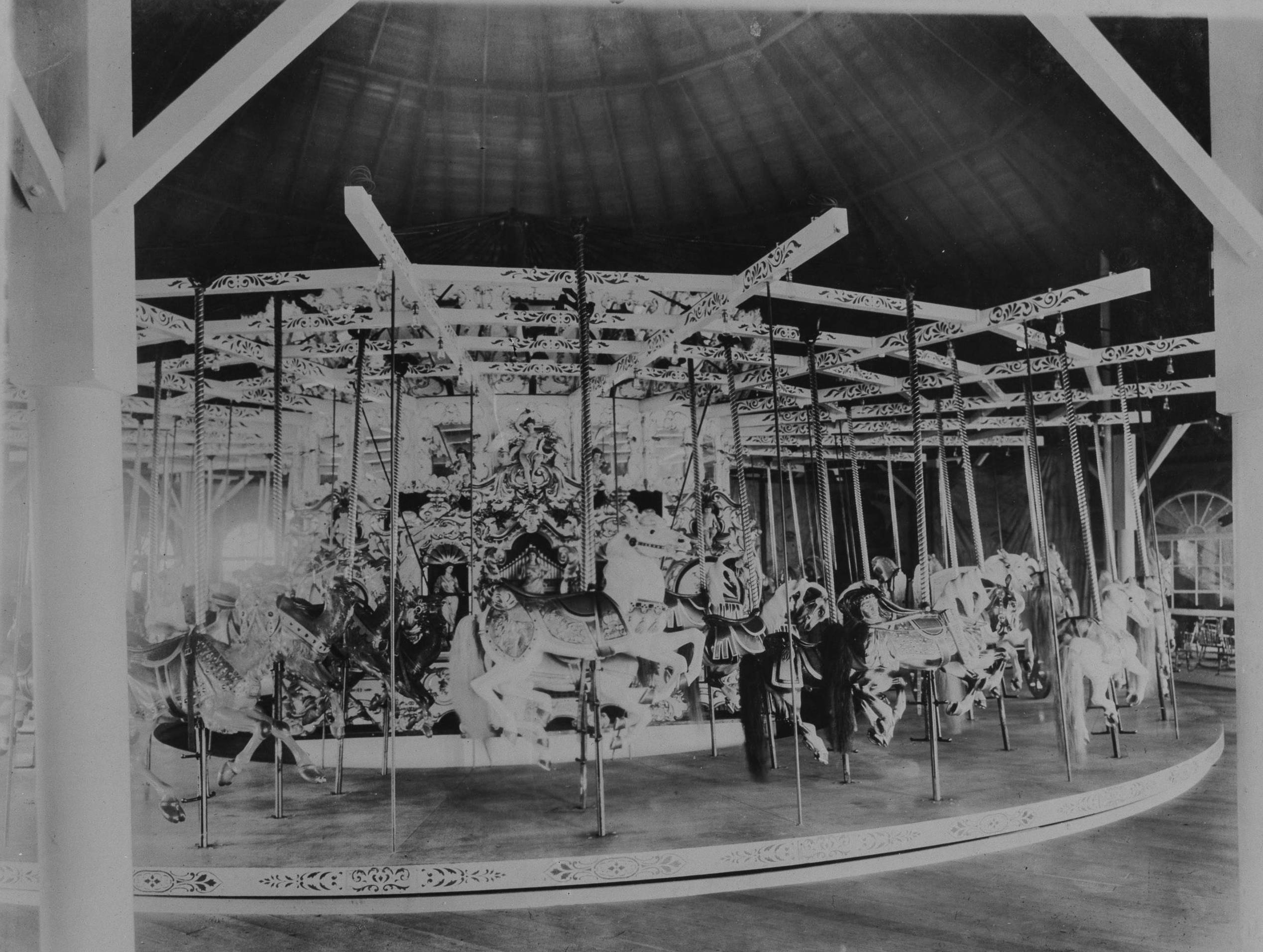 The original Looff carousel featured horses and a menagerie of other animals, including the camels glimpsed here. The original was dismantled in 1939 and replaced with the 1922 Philadelphia Toboggan Company merry-go-round that is still in use today. 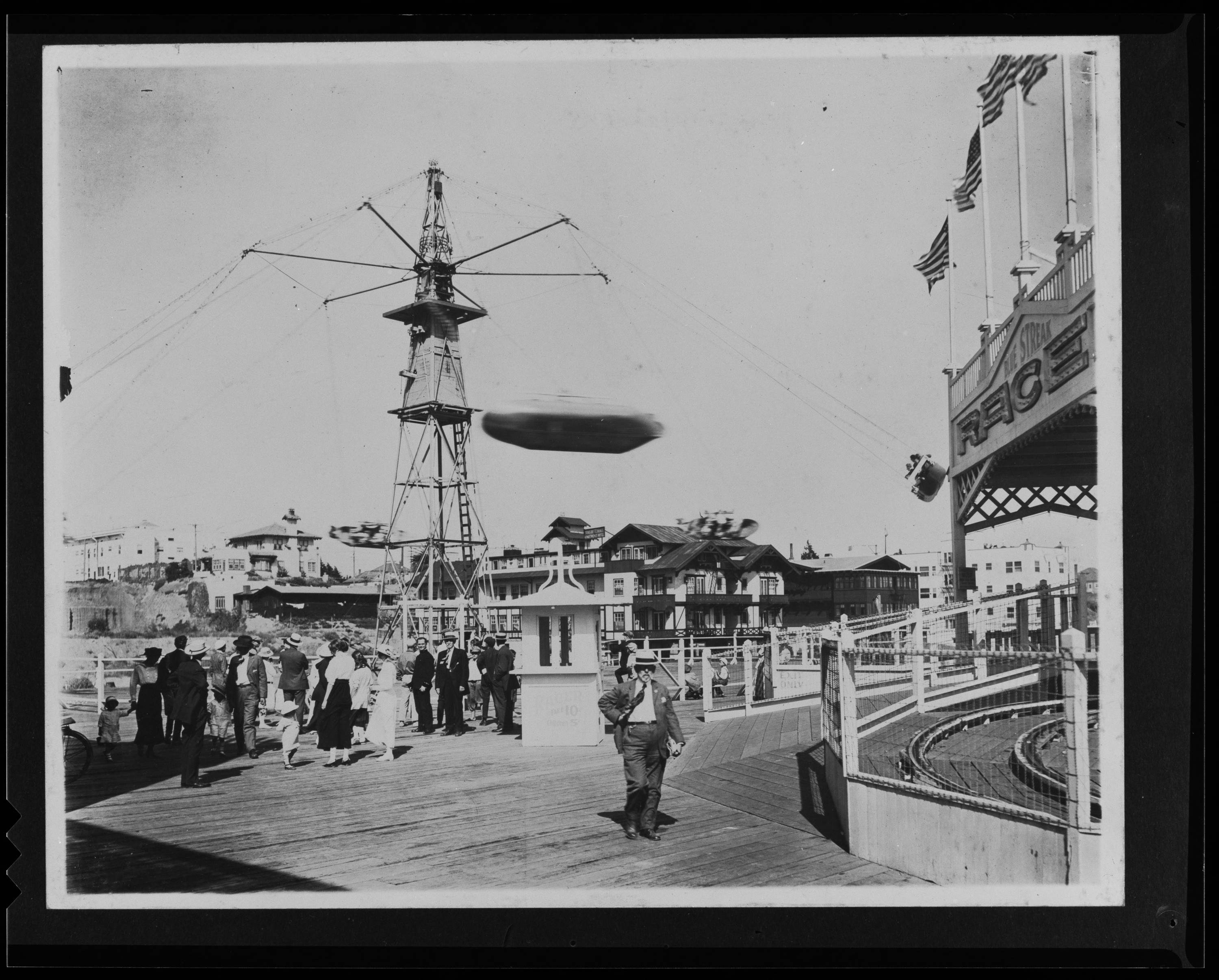 The Aerodrome was one of the first attractions at the pier. It was a centrifugal swing or “flat” ride, that flew riders around a central pole.

The Santa Monica Pier turned 110 on September 9. It’s an impressive anniversary for a structure whose fate has so often been in the balance.

This much-loved and nationally recognized landmark has attracted generations of Angelenos, who have ridden the carousel housed in its fanciful “hippodrome” building, fished from the sides of the pier, or just enjoyed a stroll to the end of the structure for a view of the bay, but it also has a complex history.

The original pier was built in 1909 for the inglorious purpose of transporting sewage through a pipe out into the bay for seafloor disposal. Despite its utilitarian and odiferous purpose, the structure was instantly popular with fishermen and beach visitors.

Charles Looff, a master woodcarver and entrepreneur who emigrated from Germany in 1870, had an ambitious plan for Santa Monica’s municipal wastewater disposal project. He envisioned a seaside amusement park on the pier to rival nearby Ocean Park.

Looff created Coney Island’s original merry-go-round in New York in 1876 and went on to build carousels and amusement park attractions on both coasts. Looff had already built the Santa Cruz boardwalk’s carousel and the Pike Hippodrome in Long Beach, where he and his family lived and had a workshop, when he was awarded the franchise for the Santa Monica Pier in April of 1916.

The municipal pier, designed by engineer August Stutzer, was advertised as the first concrete pier in the U.S. Its builders boasted that it was indestructible—the dedication ceremony featured a tableau of Neptune, King of the Ocean, surrendering to Queen Santa Monica, acknowledging that the concrete was immune to his waves, and leaping into the sea accompanied by a display of fireworks.

“The tableau…is emblematical of the conquest of the pier destroying forces of the ocean by the construction of concrete,” the Los Angeles Herald enthused in 1909.

Neptune may have been impressed, but a number of engineers were not. They cautioned that the concrete had design flaws.

In 1919, while the pier was crowded with spectators waiting to watch a review of Navy vessels, some of the concrete pylons collapsed causing the structure to sink as much as two feet in places. Water had penetrated the concrete supports, causing the rebar inside to rust.

The concrete was replaced over the next two years with creosote-treated wooden pylons. The pier was enlarged to its current 1000-foot length and the sewer pipe was disconnected, much to the relief of beachgoers and fishermen.

The amusement park grew to feature two rollercoasters, “The Whip” and the “Blue Streak Racer”; “The Aerodrome”, a centrifugal force ride; a theater for live performances; a penny arcade; a combination billiard hall and bowling alley; a restaurant; and a walk-through funhouse complete with a mirror maze—the attraction bore the enigmatic name, “What Is It?”

Visitors arrived at Looff’s Pleasure Pier via the Pacific Electric Railway, which stopped at Ocean Avenue. Contests and pageants took place nearly every weekend to draw visitors to the pier. It was a boom time for the rapidly growing city of Santa Monica and the amusement park thrived.

Charles Looff died in 1918, but his sons Arthur and Walter continued to run the park until 1923, when they sold it to the Santa Monica Pleasure Pier Company.

The new owners extended the Pleasure Pier and built the epic La Monica Ballroom at the end of it. This huge Arabian Nights fantasy building with its 15,000-square-foot dance floor was billed as “a castle floating over the ocean,” and “the largest dance floor on the West Coast.”

An estimated 24,000 people turned up for the grand opening on July 23, 1924, generating what is thought to have been Santa Monica’s first real traffic jam. It wouldn’t be the last.

The pier remained a popular destination during the Roaring Twenties, but it was hit hard by the Depression. Throughout much of the 1930s, its rides were shuttered and dismantled.

The Santa Monica Pier’s bridge and entry gate were built in 1938 by the federal Works Project Administration. The project would herald a new era of prosperity, but the war years were austere. The pier was used by commercial fishing boats for landing their catch during WW II because the military had commandeered most of the larger piers and anchorages, but the aging structure began to collapse. After a prolonged siege that involved disgruntled fishermen dumping tons of dead fish in the bay because they couldn’t unload it, the U.S. government agreed to shore up the pier, ensuring that fish could get to market, and that the pier would survive for another generation.

There is some debate over when the hippodrome’s original carousel was removed. The application to nominate the building to the National Register of Historic Places states it was sold in 1939. Newcomb replaced Looff’s carousel with a 1922 Philadelphia Toboggan Company merry-go-round that is still in use, and he went on to add other attractions, including a new rollercoaster.

Newcomb died in 1948, but his family continued to operate the park for more than two decades. The ‘50s brought Disneyland and other theme parks, and the golden era of the Pleasure Pier seemed to be at an end.

By the 1960s, the amusement park had fallen into disrepair again. The roof of the ballroom partially collapsed in 1963. The “castle floating over the ocean” and the pier extension it stood on were deemed unsafe and were torn down, and it seemed inevitable that the rest of the pier would face the same fate.

Activists rallied and formed an organization called “Save Santa Monica Bay.” They fought back against a range of development proposals that included replacing the pier with a massive hotel, and the infamous Santa Monica Bay Causeway—a wildly ambitious proposal to flatten parts of the Santa Monica Mountains and build a manmade barrier island out of the rubble that stretched from Santa Monica to Malibu to accommodate an offshore freeway, manmade beaches, harbors, and luxury housing developments.

The pier was saved from demolition in 1973. The amusement park was acquired by the city of Santa Monica in 1974, giving the local government control of both piers for the first time, but the property needed extensive restoration.

Preservationists suffered a major setback a decade later, when a series of storms during the winter of 1983 severely damaged the pier.

This time, instead of proposing to finally demolish the structure, the pier  was rebuilt in the spirit of Looff’s amusement park, with a new roller coaster and an old-fashioned arcade.

The carousel was fully restored in 1981 and continues to offer children of all ages a historic and romantic ride. Every weekend, all year round, crowds pack the pier to ride the roller coaster, play the arcade games, fish off the side, or just walk to the end for the view of the bay.

Charles Looff would approve, and if his ghost stopped by his pier today, he would find that his hippodrome is now a National Historic Landmark, and he would still hear the familiar sounds of organ music from the carousel, and smell the instantly evocative scent of ocean water, creosote, and cotton candy that have beguiled and enchanted five generations of Angelenos.

Somehow, against all the odds, the Santa Monica Pier outlasted all of its rivals and survived long enough to become an indispensable part of local culture and history. That’s something that doesn’t often happen in Los Angeles.

Learn more about the Santa Monica Pier at https://santamonicapier.org

Turning the Tide on Plastics