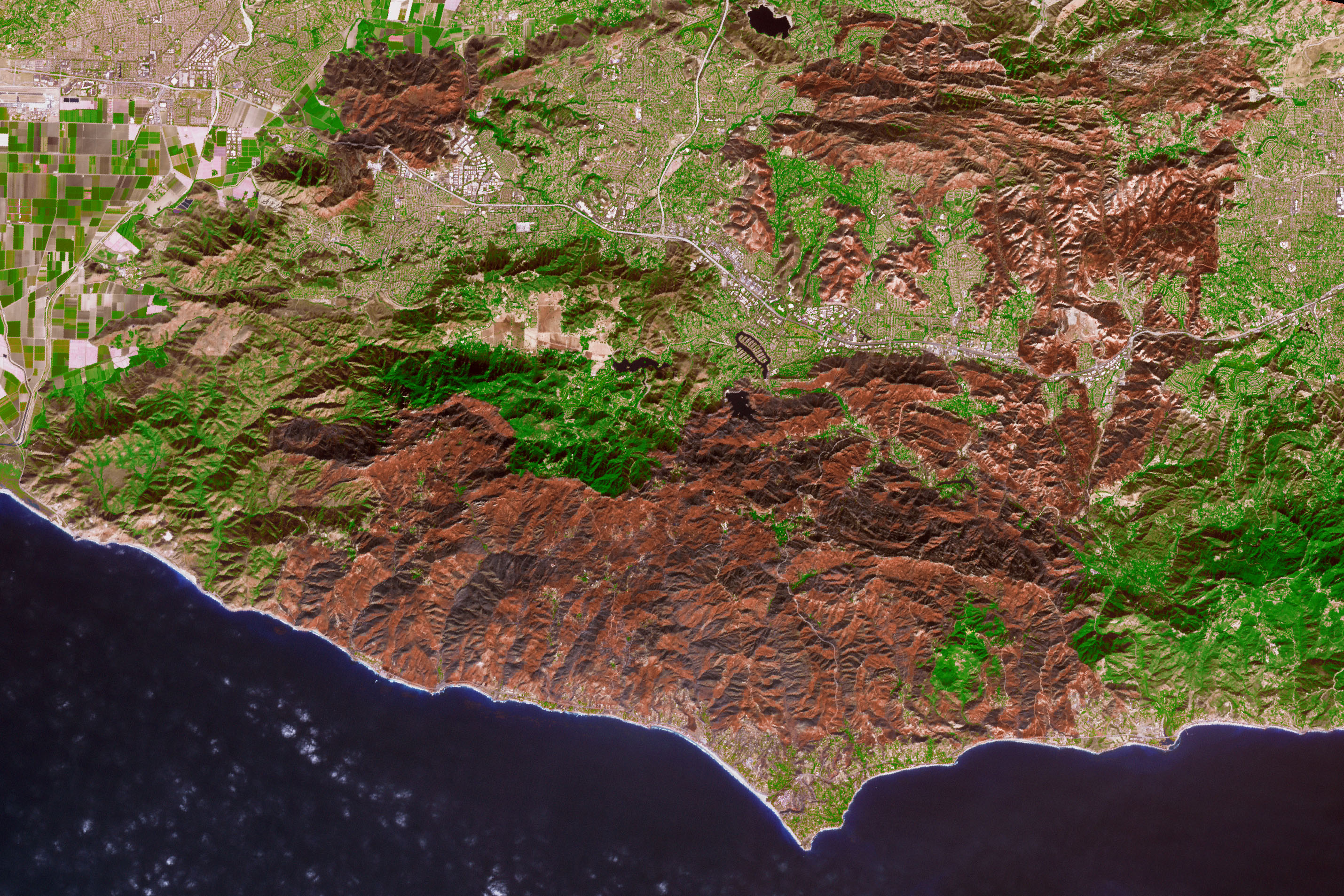 The Woolsey Fire in Southern California has left a scar on the landscape so large that it is easily visible from space. As of November 24, 2018, Cal Fire reported that the fire was 100 percent contained and had burned 97,000 acres (393 square kilometers, or 152 square miles). The Advanced Spaceborne Thermal Emission and Reflection Radiometer (ASTER) on NASA’s Terra satellite acquired this view of the burn scar. The colors in this falsecolor infrared image (bands 3, 2, 1) have been enhanced to simulate a more natural appearance. Burned vegetation appears brown and unburned vegetation appears green. Buildings, roads, and other developed areas appear light gray and white. NASA Earth Observatory image by Joshua Stevens. 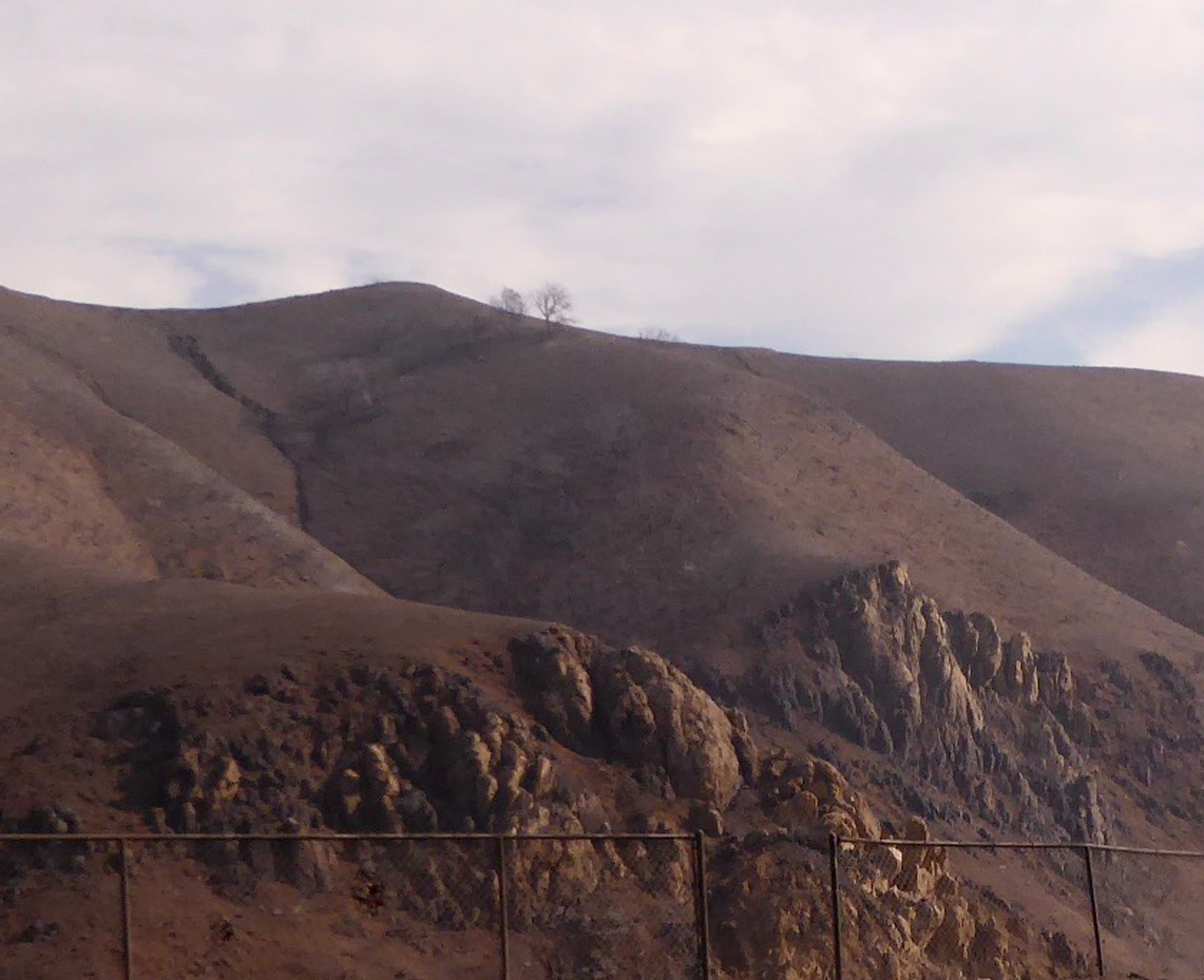 A bleak, post-apocalyptic view of the seared and blackened canyon along Kanan Dume Road. This entire corridor burned, from the top of Ladyface Mountains, to Pacific Coast Highway in Malibu, and diagonally down Dume Canyon to the beach at Westward. Photo by Suzanne Guldimann 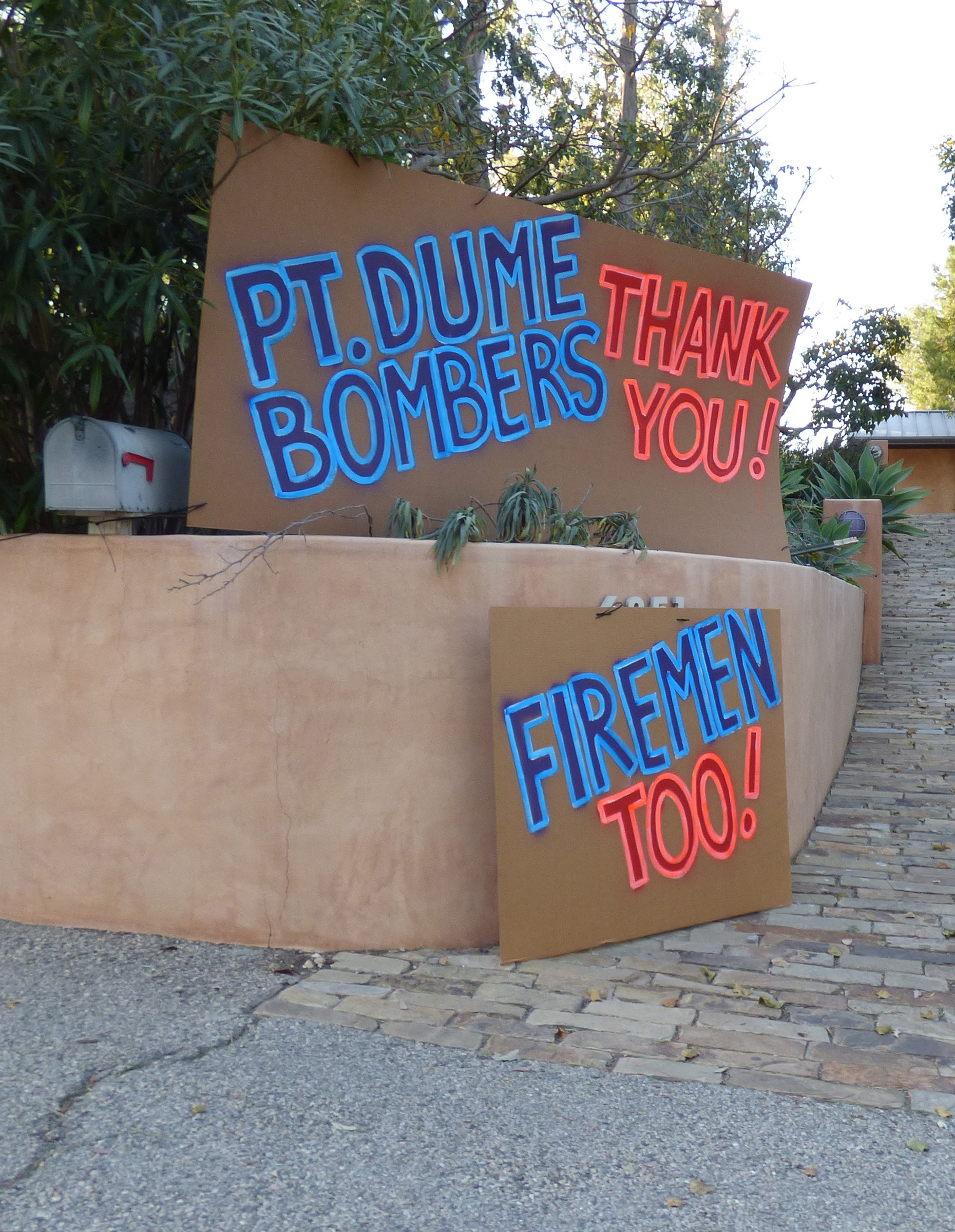 Not everything burned on Point Dume. A small group of residents and volunteers, calling themselves the "Point Dume Bombers," refused to evacuate and helped save dozens of homes. They used dirt bikes, two-way radios, shovels, and a water truck to spot and extinguish flair-ups. Photo by Suzanne Guldimann 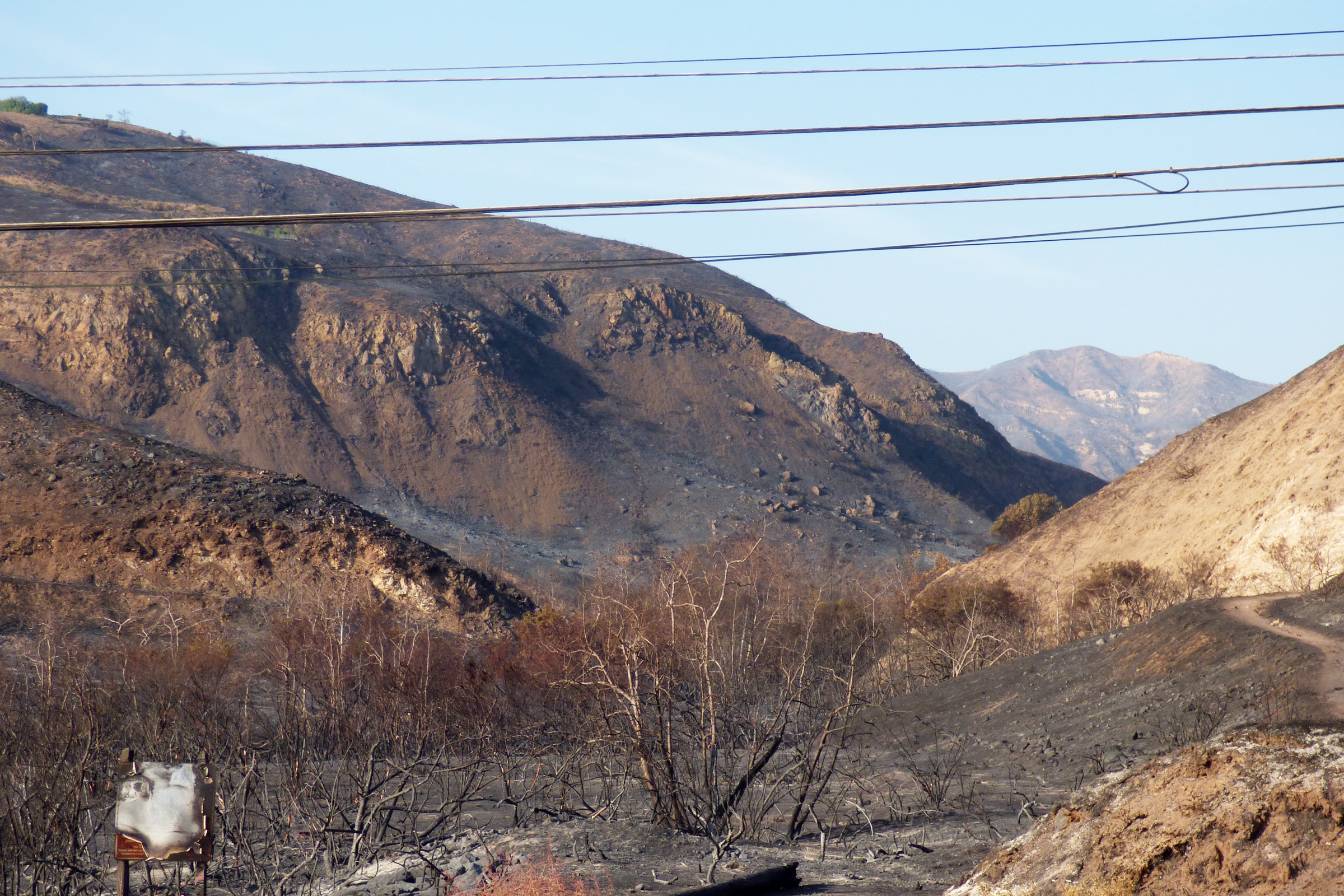 The sign in the foreground used to welcome hikers to the Sara Wan Trailhead in Corral Canyon Park. More than half of the Santa Monica Mountains National Recreation Area was burned in the Woolsey Fire, and many park units are closed indefinitely. Parts of the canyon are still not even open to residents. Photo by Suzanne Guldimann 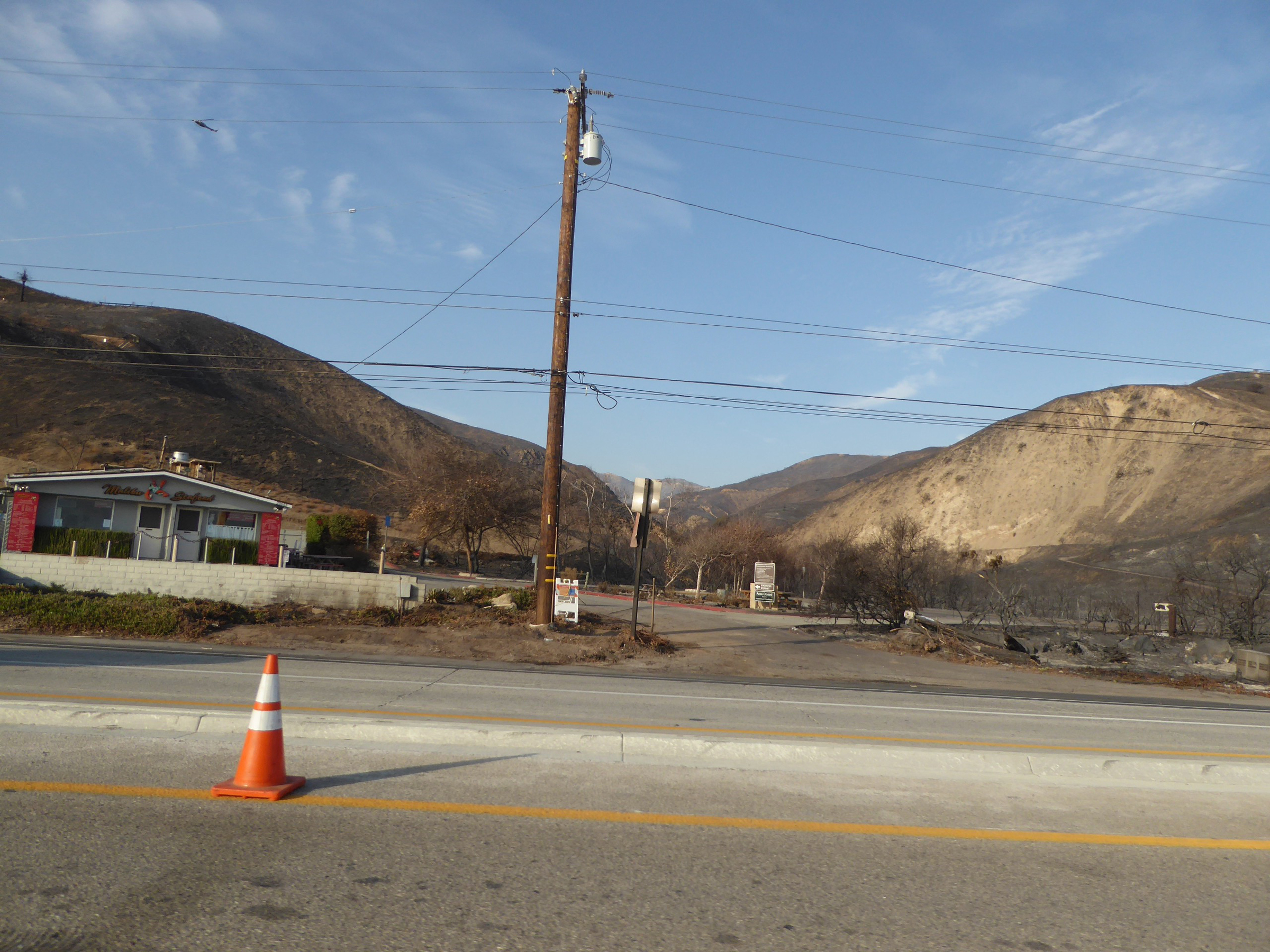 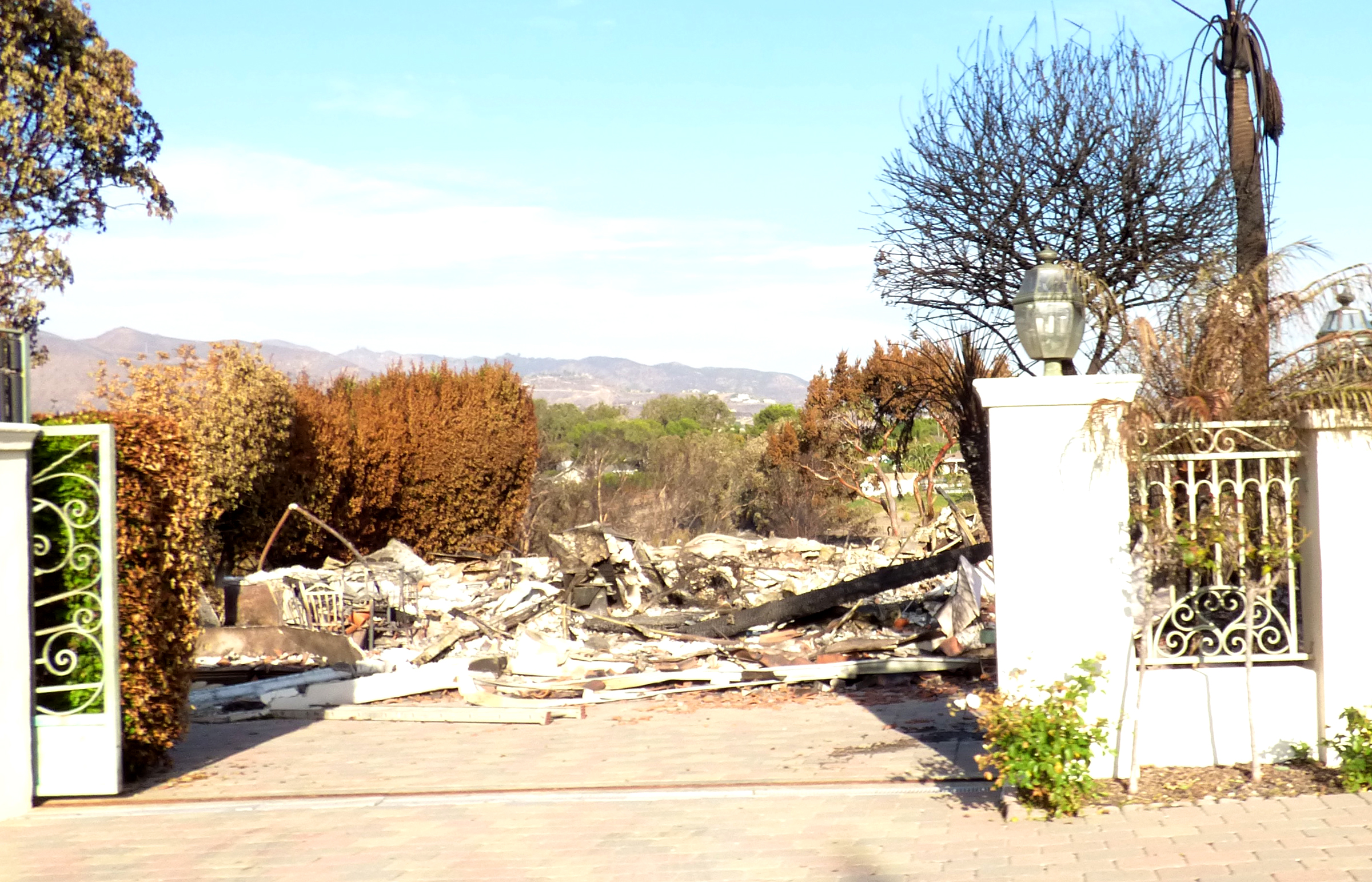 Beautiful gates lead to nothing but debris at one of the numerous burnouts on Point Dume in Malibu. This street was especially hard hit, with house after house reduced to ashes. Photo by Suzanne Guldimann 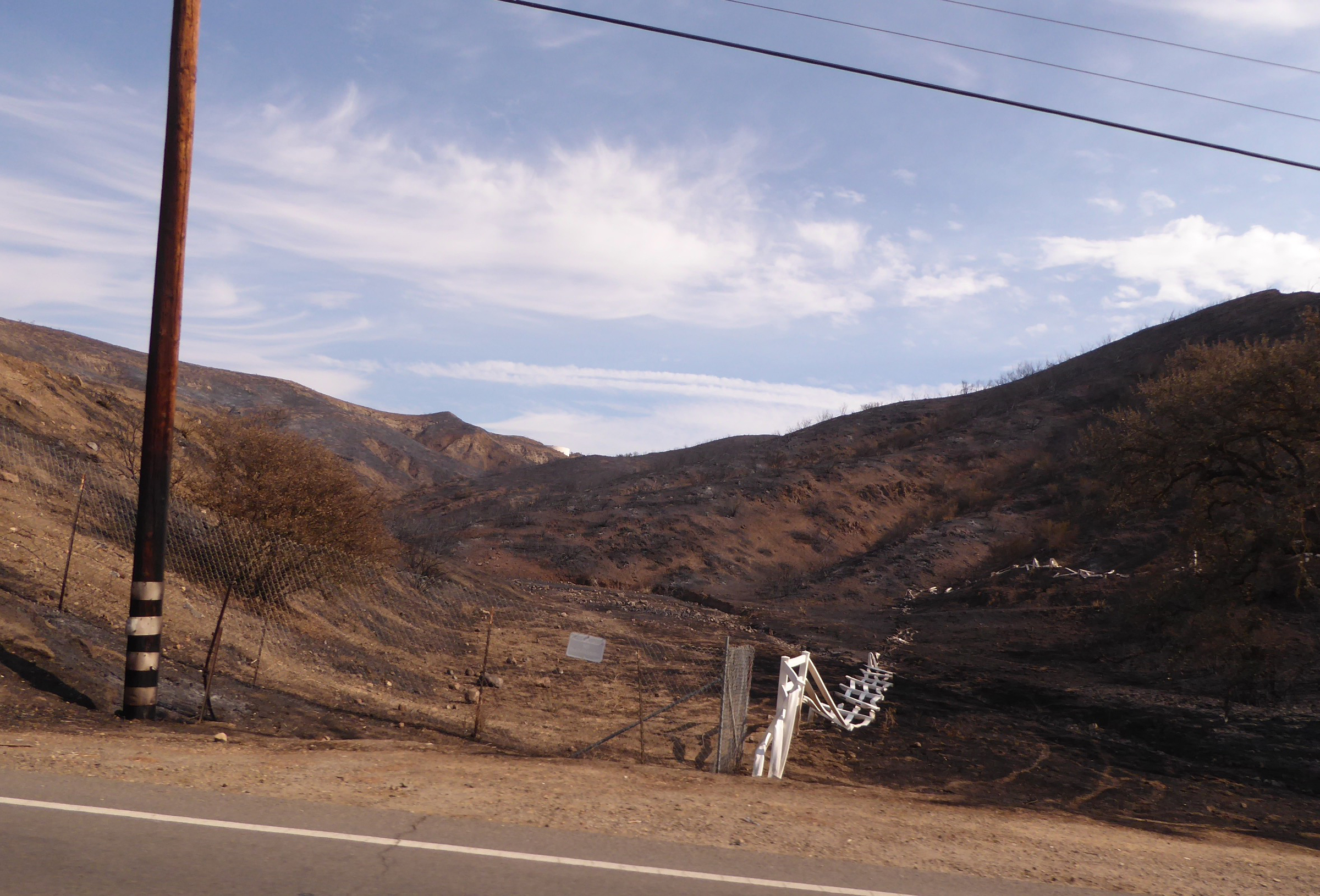 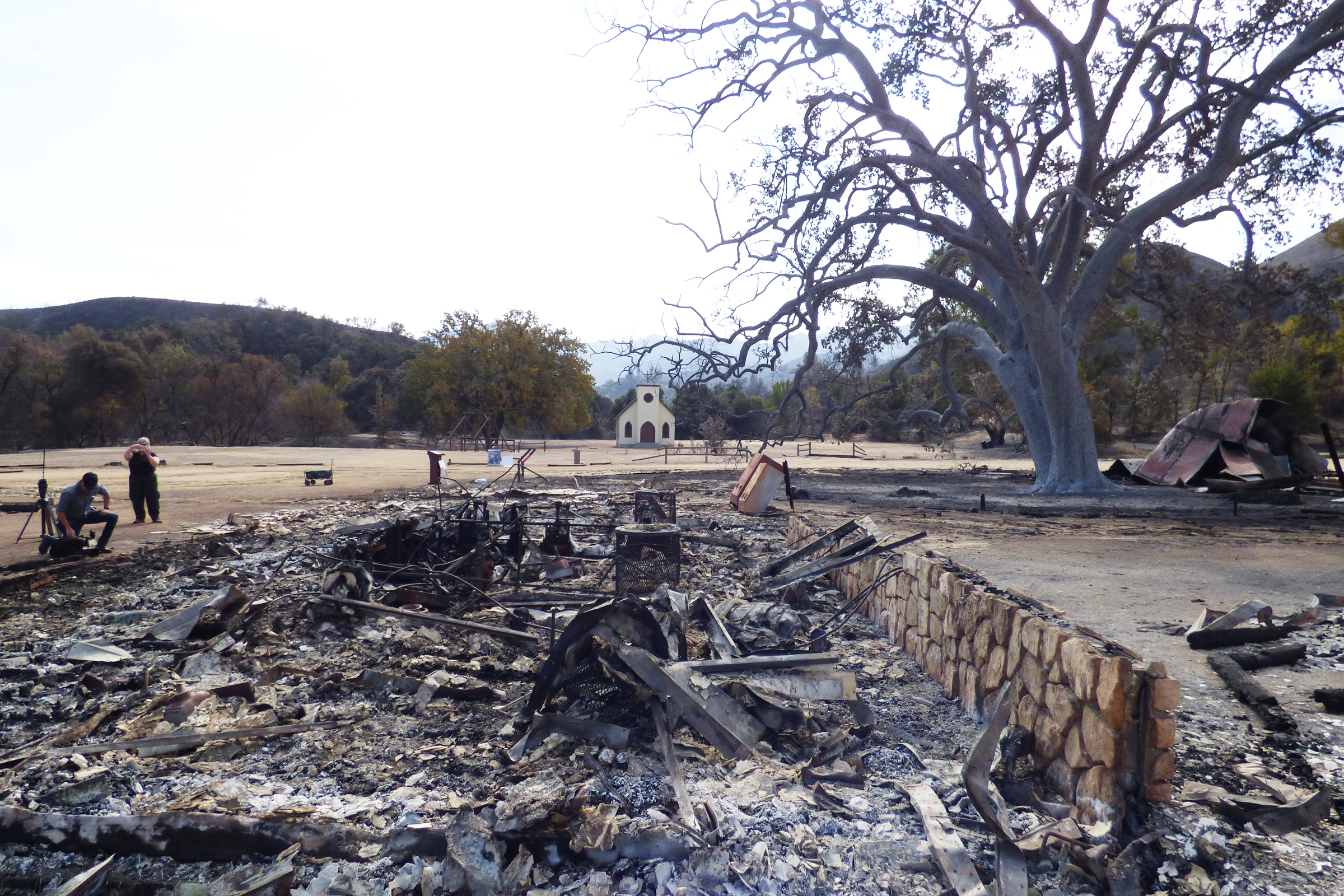 The ruins of the Western town film set at the National Park Service’s Paramount Ranch did not evoke the visceral response to seeing burned out houses and wildlife killed by the fire, but the devastation was still terrible. Photo by Suzanne Guldimann 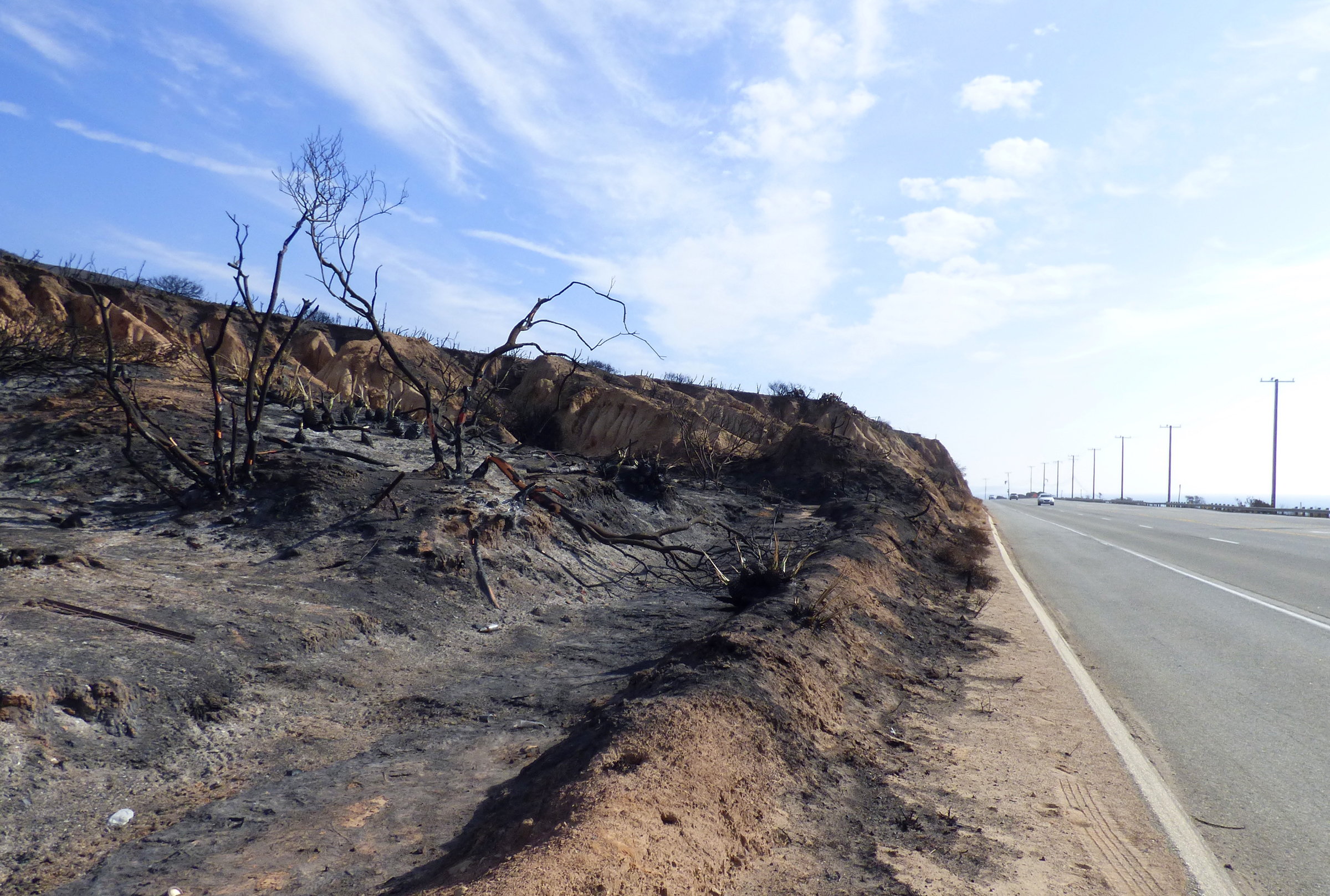 Blackened terrain near the Ventura County Line, where the fire burned to the edge of PCH. Photo by Suzanne Guldimann 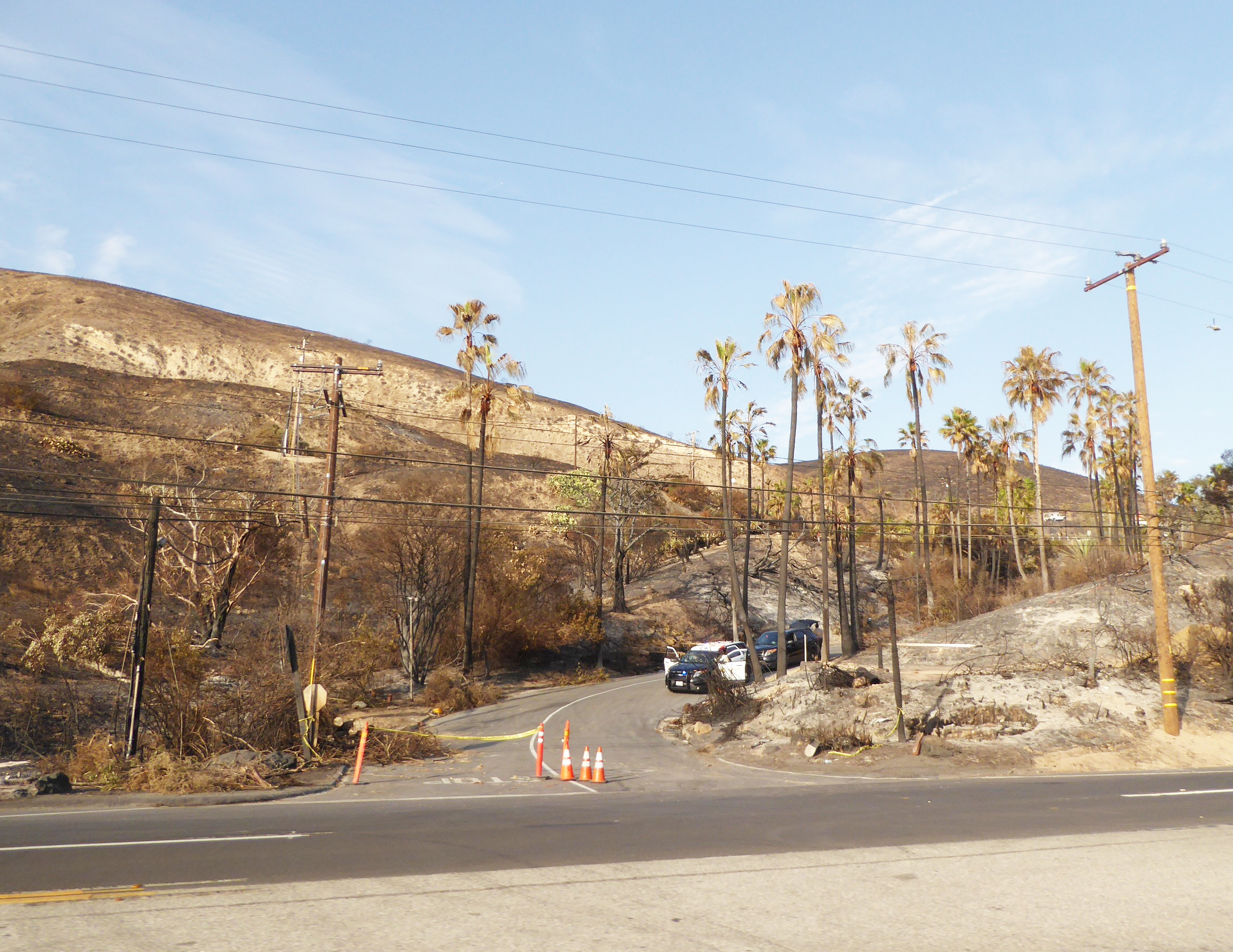 The Malibu RV Park, at the bottom of Corral Canyon on Pacific Coast Highway, was almost completely destroyed. Photo by Suzanne Guldimann 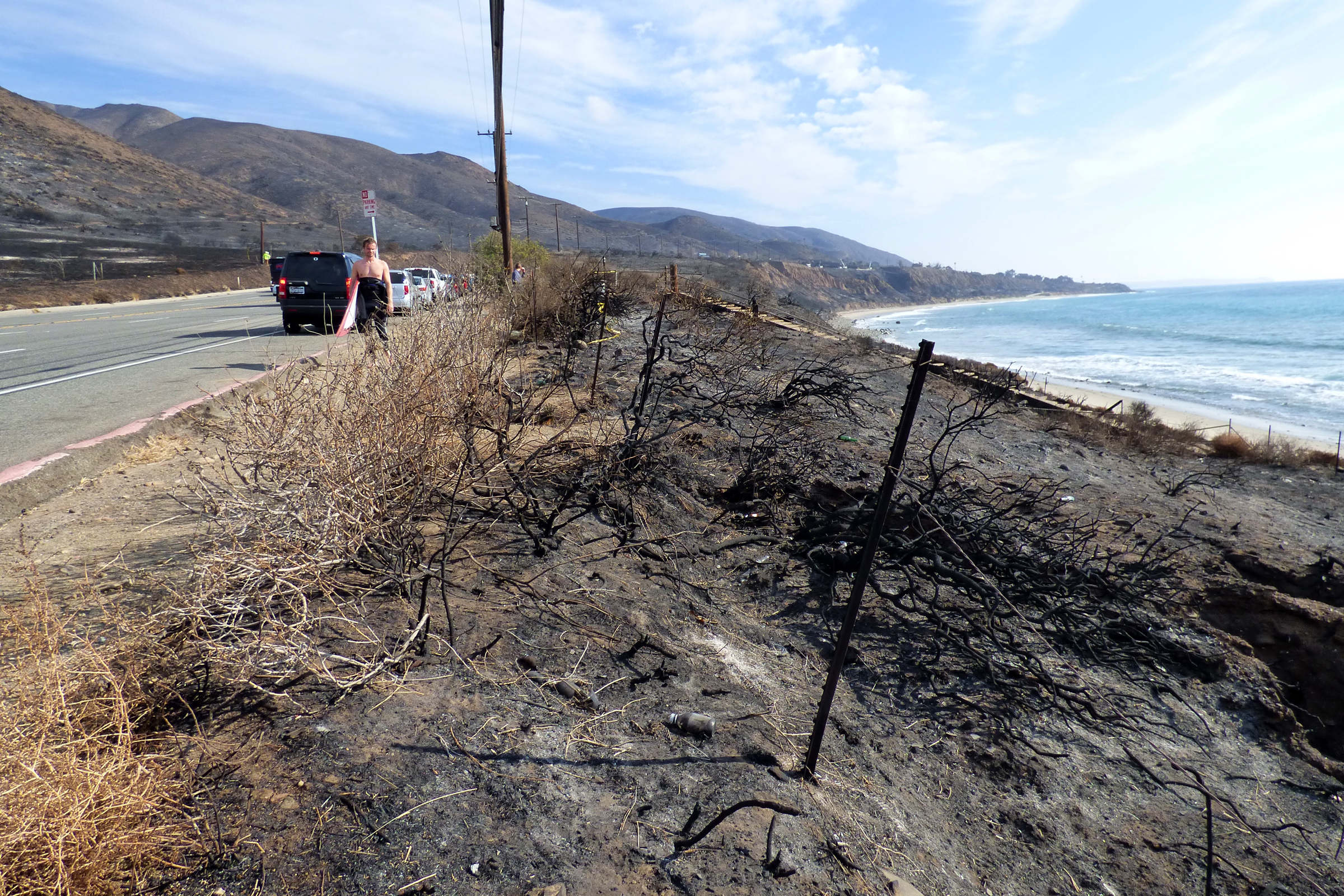 The fire jumped across PCH at Leo Carrillo State Park, burning down to the beach and destroying the wooden beach access stairs, but that didn’t stop surfers from picking their way through the ruins to the surfbreak. Photo by Suzanne Guldimann

Nature will recover in her own time. Humans will be wise to follow her lead.

It took an army of fire fighters more than two weeks to fully contain the Woolsey Fire. The wildfire, which was first reported at 2:24 p.m., Thursday, November 8, in Woolsey Canyon, near the Santa Susana Field Laboratory, consumed nearly 97,000 acres—152 square miles—from the Simi Hills to the ocean in Malibu, before being contained. The burn scar from the fire is so extensive it can be seen from space in NASA satellite imaging.

Topanga residents returned home to an unburned canyon following the mandatory evacuation order issued on the afternoon of Friday, November 9. Topanga was the only major canyon route to avoid disaster. Decker, Encinal, Kanan, Latigo, and Malibu Canyon were all impacted by the fire.

Los Angeles County Chief Deputy David Richardson reported that the advancing edge of the wildfire was 14 miles wide when it arrived at the 101 Freeway in the early hours of November 9. It jumped the freeway at multiple points, sending a wall of flames down multiple fire corridors, including the historic Malibu Canyon and Kanan/Decker corridors.

It took two full weeks for Kanan Dume Road to reopen. The fire burned the entire route from the top of Ladyface Mountain in Agoura Hills to Pacific Coast Highway, where it then jumped PCH and swept through Point Dume to Westward Beach, an area that hasn’t burned since 1935.

In the east, the fire continued to burn toward Topanga, crossing Las Virgenes Road and traveling up Mulholland. The western flank of the conflagration ripped through residential Malibu Park destroying dozens of houses, and the National Park Service’s Zuma and Trancas Canyon parkland. It continued up the coast past County Line, consuming houses and parkland on both sides of PCH. Several of the area’s most popular beaches were affected, including Westward, where houses burned on the bluff above the public parking lot; El Matador, where the fire burned to the sea; and Leo Carrillo, which was left as desolate and lifeless as the surface of the moon in the aftermath of the fire. A fact that didn’t stop surfers from making their way through the charred landscape to the surf break at Secos.

Buildings and parkland burned in Calabasas, Agoura Hills, and Thousand Oaks. When the Messenger Mountain News went to press, a total of 1500 structures—most of them houses—were reported destroyed in the fire. That number is expected to climb as all areas are evaluated. The initial count in just the City of Malibu was 443 homes entirely destroyed by the fire.

Infrastructure was also destroyed, including thousands of power poles and hundreds of miles of electrical wires, communication cable, and cell towers. Wide swathes of the burn zone were left without power or communication. An army of Edison workers was deployed to rebuild the network of power poles. Mobile cell towers provided isolated residents with at least limited communication. For residents who chose to stay behind during the disaster, there were few resources, and the only source of information in many areas was via social media platforms like Nextdoor and Twitter, rather than official sources.

NPS is reporting that approximately half of the Santa Monica Mountains National Recreation Area (SMMNRA) was burned in the fire. State Parks experienced extensive damage at two of the agency’s most popular parks: Leo Carrillo State Park and Malibu Creek State Park. NPS reported that 88 percent of federal open space properties in the SMMNRA were burned, including Paramount Ranch and Solstice Canyon.

The Santa Monica Mountains Conservancy (SMMC) and its sister agency the Mountains Restoration and Conservation Authority (MRCA) have not yet released official numbers, but they also experienced extensive losses at many of their properties, including Charmlee Wilderness Park in Malibu, the newly acquired Triangle Ranch open space in Agoura Hills, Triunfo Canyon Park in the Westlake Village/Agoura area, and the agency’s headquarters in Ramirez Canyon, where at least one building was burned.

The historic buildings at Peter Strauss Ranch were destroyed, so was Morrison Ranch. The Western Town movie and TV set at Paramount ranch was completely destroyed except for the church and train station sets. More troubling is the loss of key wildlife habitat in areas like Malibu Creek State Park and Leo Carrillo State Park.

Three people lost their lives in the fire. Three firefighters sustained serious injuries. Malibu’s Mayor Pro Tem Jefferson Wagner is recovering from injuries sustained while trying to save his Latigo Canyon retreat. The property burned. The council member spent a week in ICU, but is recovering.

Edison crews continue to work restoring electricity for the burned out areas, including Point Dume, where those who did not lose their homes were in the dark for more than two weeks.

Residents returning to the burn zones were faced not only with cleaning up smoke damage and the ubiquitous ash that carpeted the entire area, but also with sandbagging in advance of the first real rain of the year, a hazard that did not materialize during that first rain, but is expected to remain a major threat throughout the rainy season.
The Woolsey Fire was catastrophic, and has now surpassed the 2017 Thomas Fire in terms of cost of damage, but it still could have been much worse. During the height of the disaster, a quarter of a million people were under mandatory evacuation orders and 25,000 homes were in the direct line of the fire.

The rebuilding process is going to be slow and costly, and many parts of the Santa Monica Mountains may never be the same, but at least the fire is out. The recovery has begun.

RESOURCES & FUNDRAISING
The volunteer organization and its coalition partners that did the most for Topanga during the disaster, working tirelessly to inform, evacuate, and protect residents is TCEP, the Topanga Coalition for Emergency Preparedness. The non-profit actively works to safeguard the community throughout the year, not just during disaster situations, and welcomes volunteers and donations, large or small.

The Santa Monica Mountains Fund, the non-profit fundraising partner of the National Park Service, didn’t wait for the emergency to be over to being a campaign to raise funds to restore Paramount Ranch, one of the NPS’s most popular parks. Learn more at: samofund.org. Funds are also being raised to assist families who lost their homes at: TKTK
Beware of Scammers. There are individual GoFundMe accounts for many victims, but there are also scammers at work. Officials recommend researching and double-checking before donating to make sure contributions go where they are intended.

Malibu Coast Animal Hospital is maintaining a list of families in need of a temporary foster home for pets, anyone interested in helping can visit: TKTK

Resources are available for residents coping with the massive clean-up and rebuilding process. They range from FEMA assistance to Los Angeles County’s Disaster Distress Helpline for emotional support and resources, available at (800) 985-5990, or by text, “TalkWithUs” to 66746.

For an up-to-date list of resources for residents of L.A. County: lacounty.gov/woolseyfire/ or https://211la.org/fire.