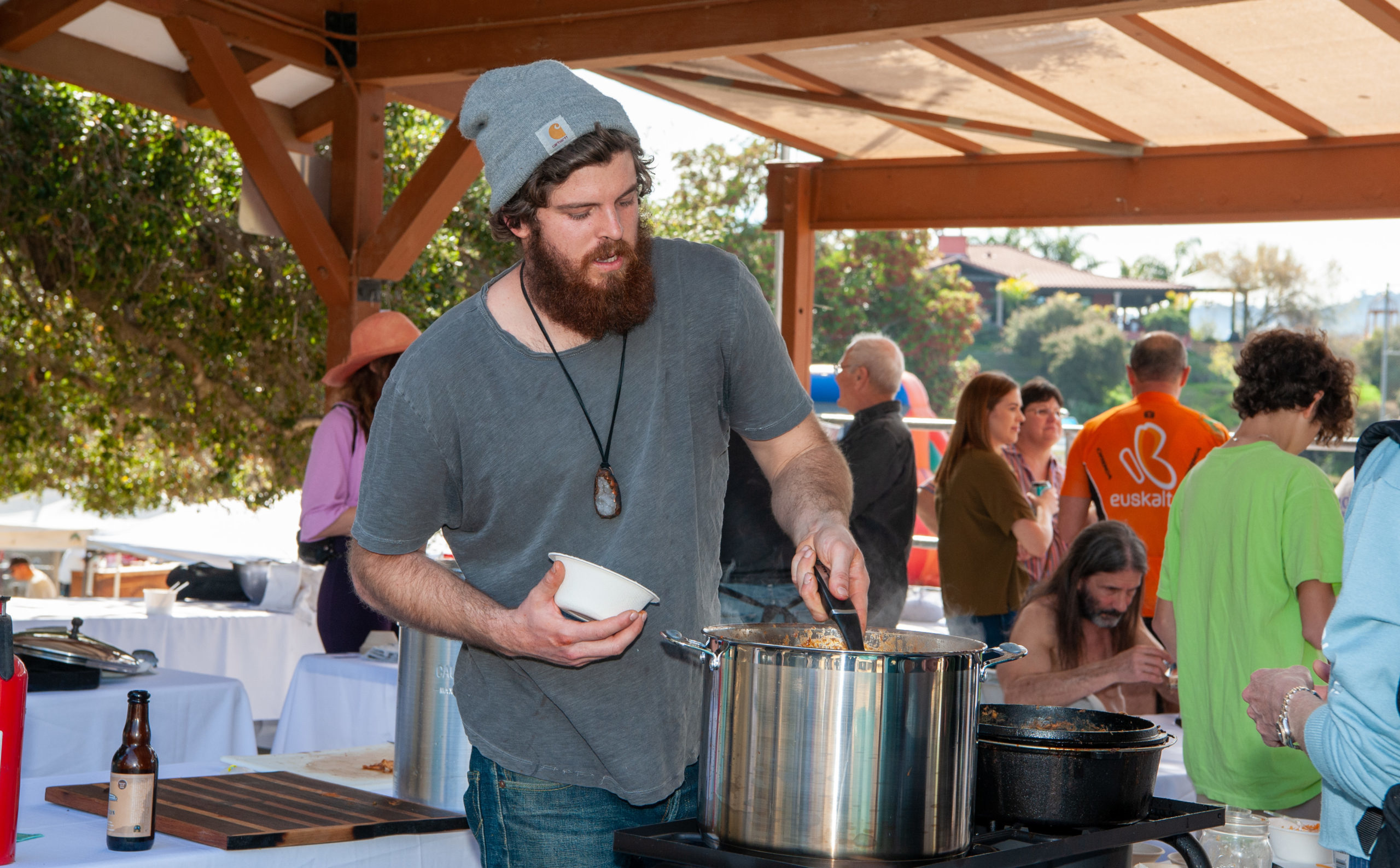 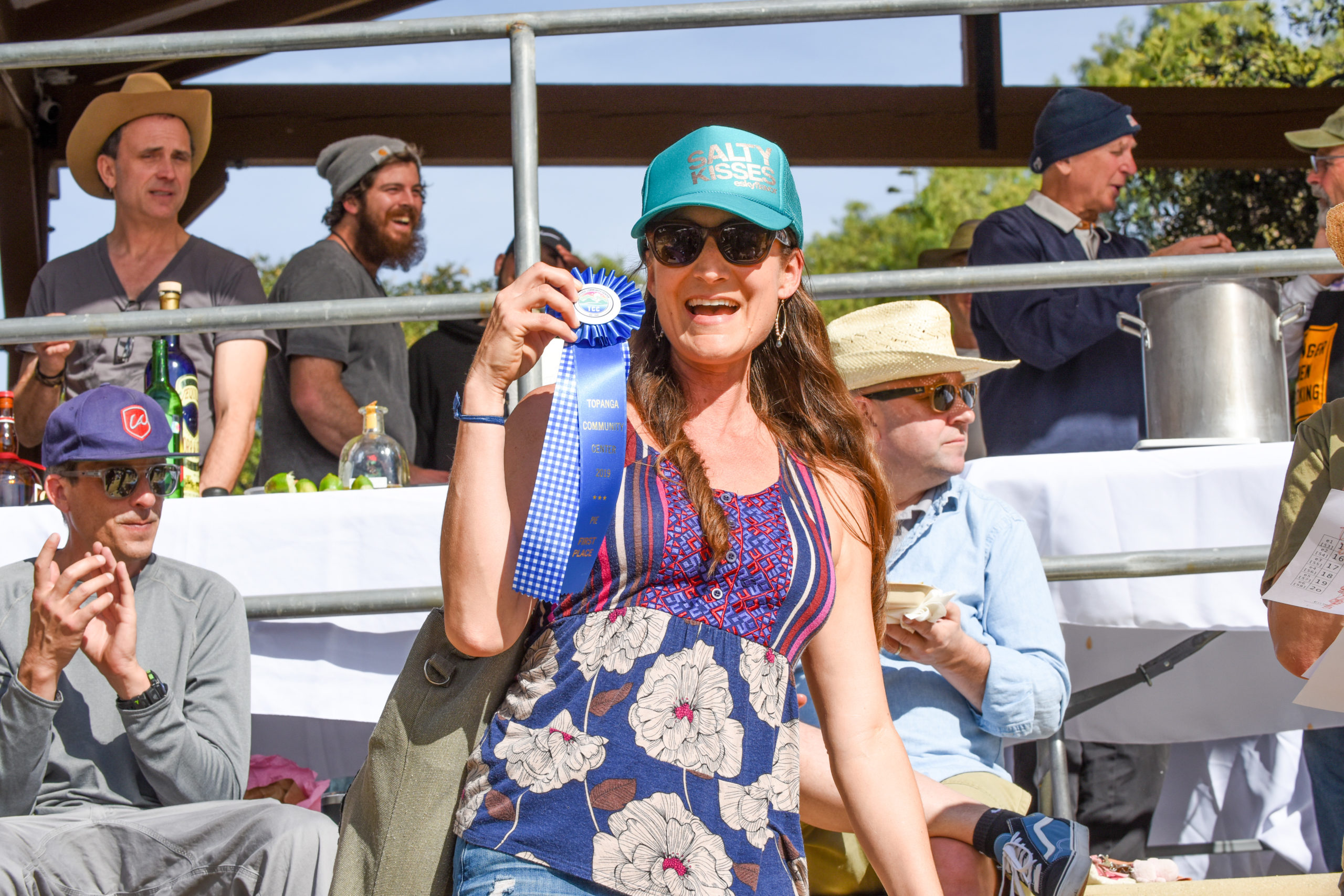 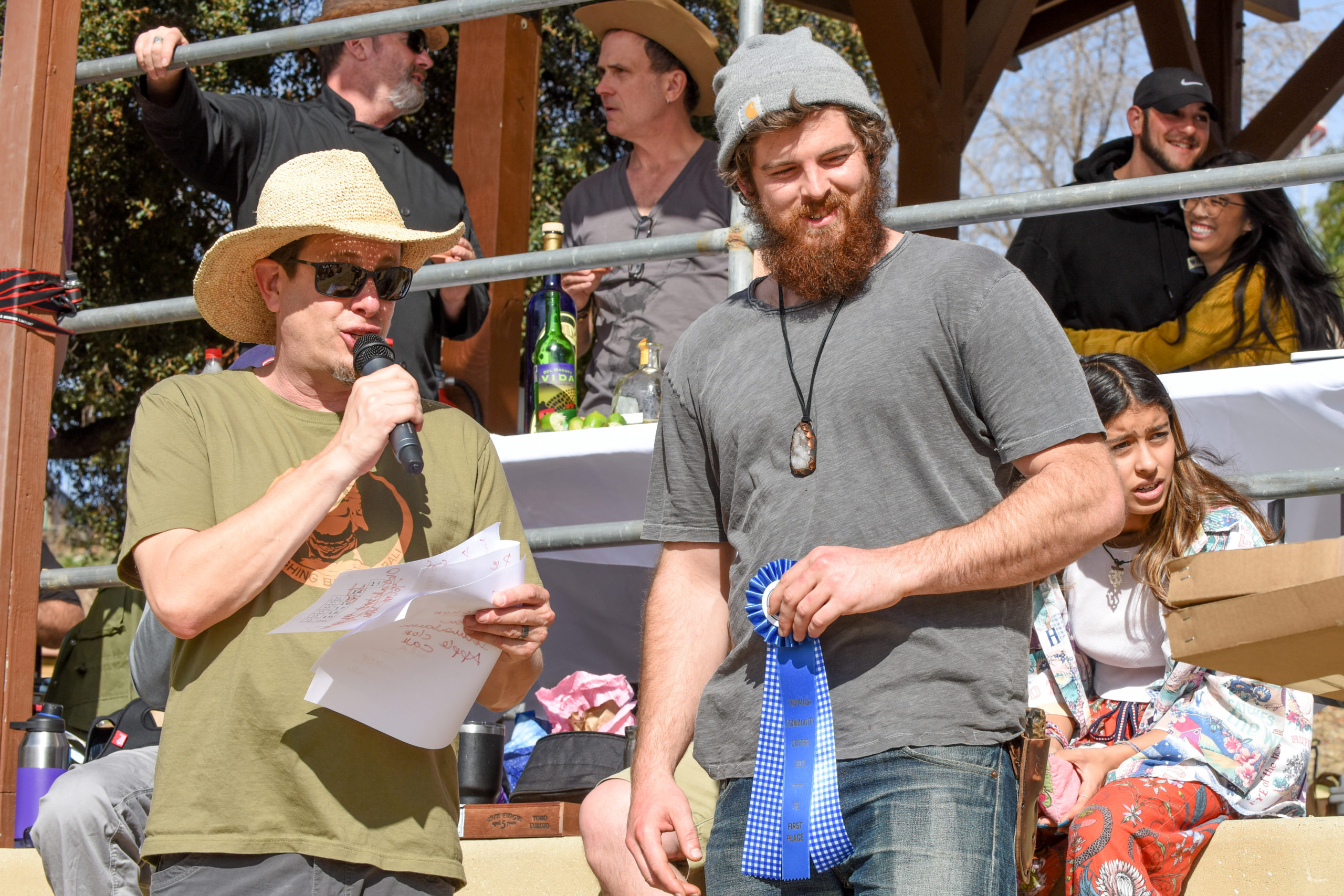 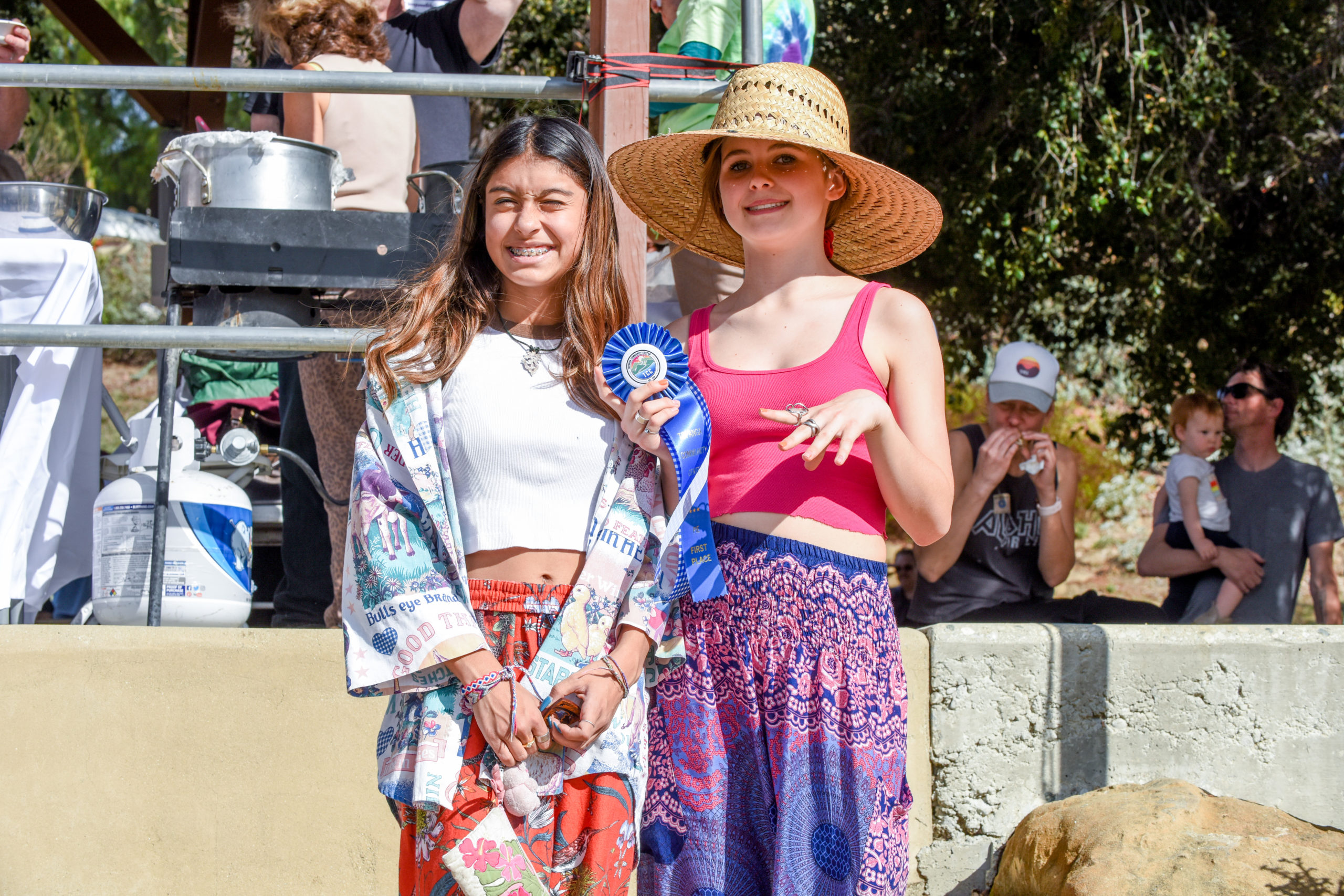 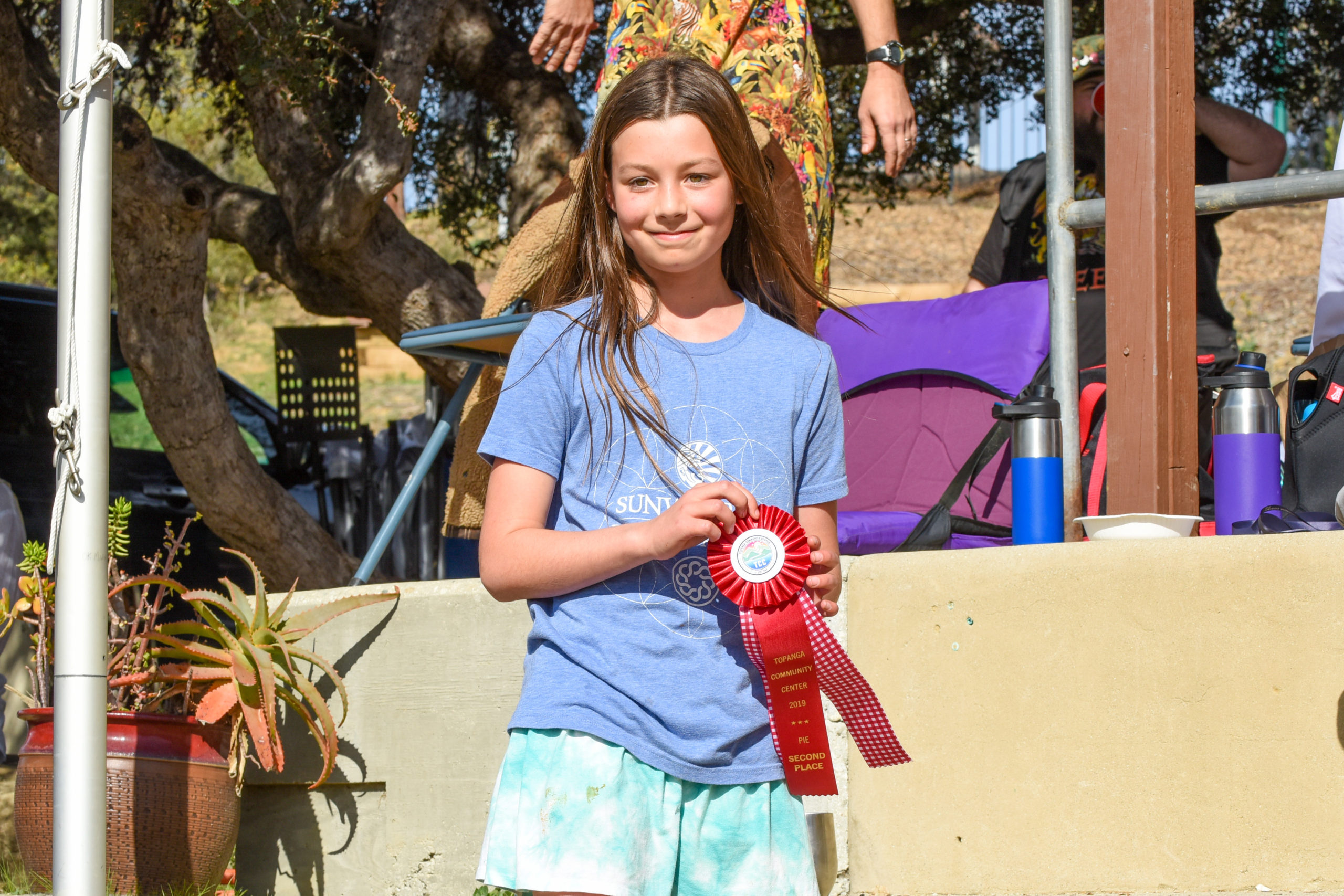 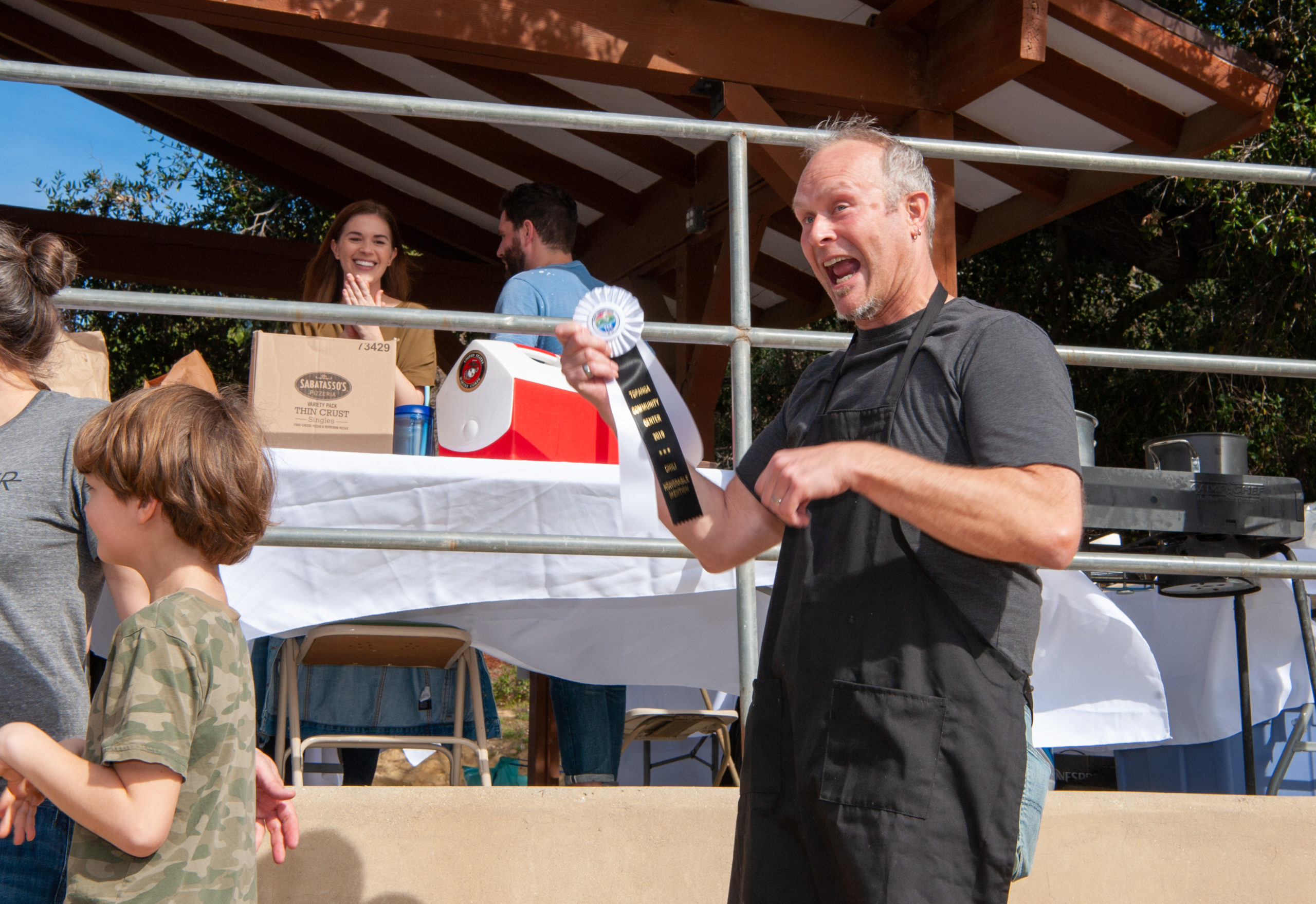 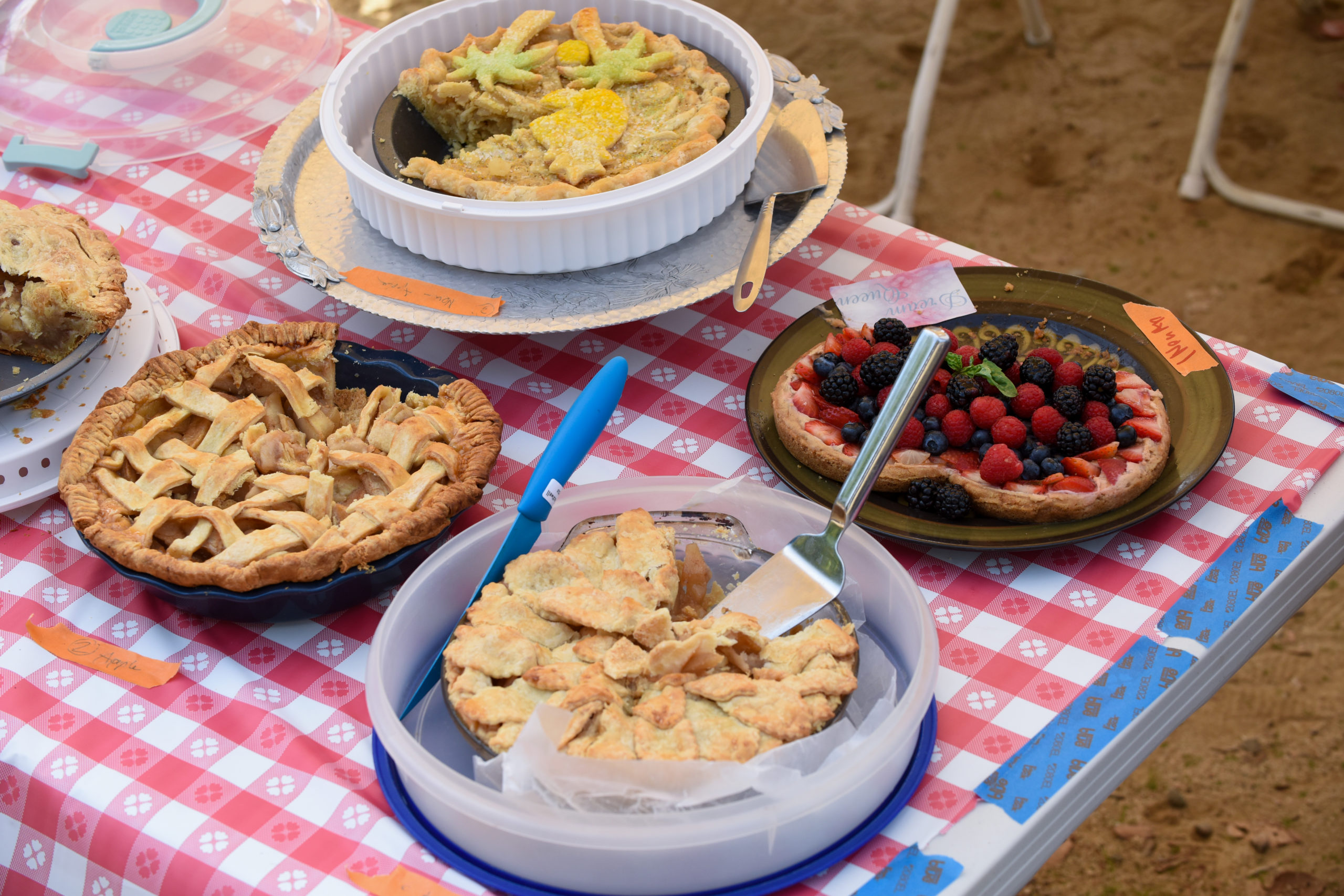 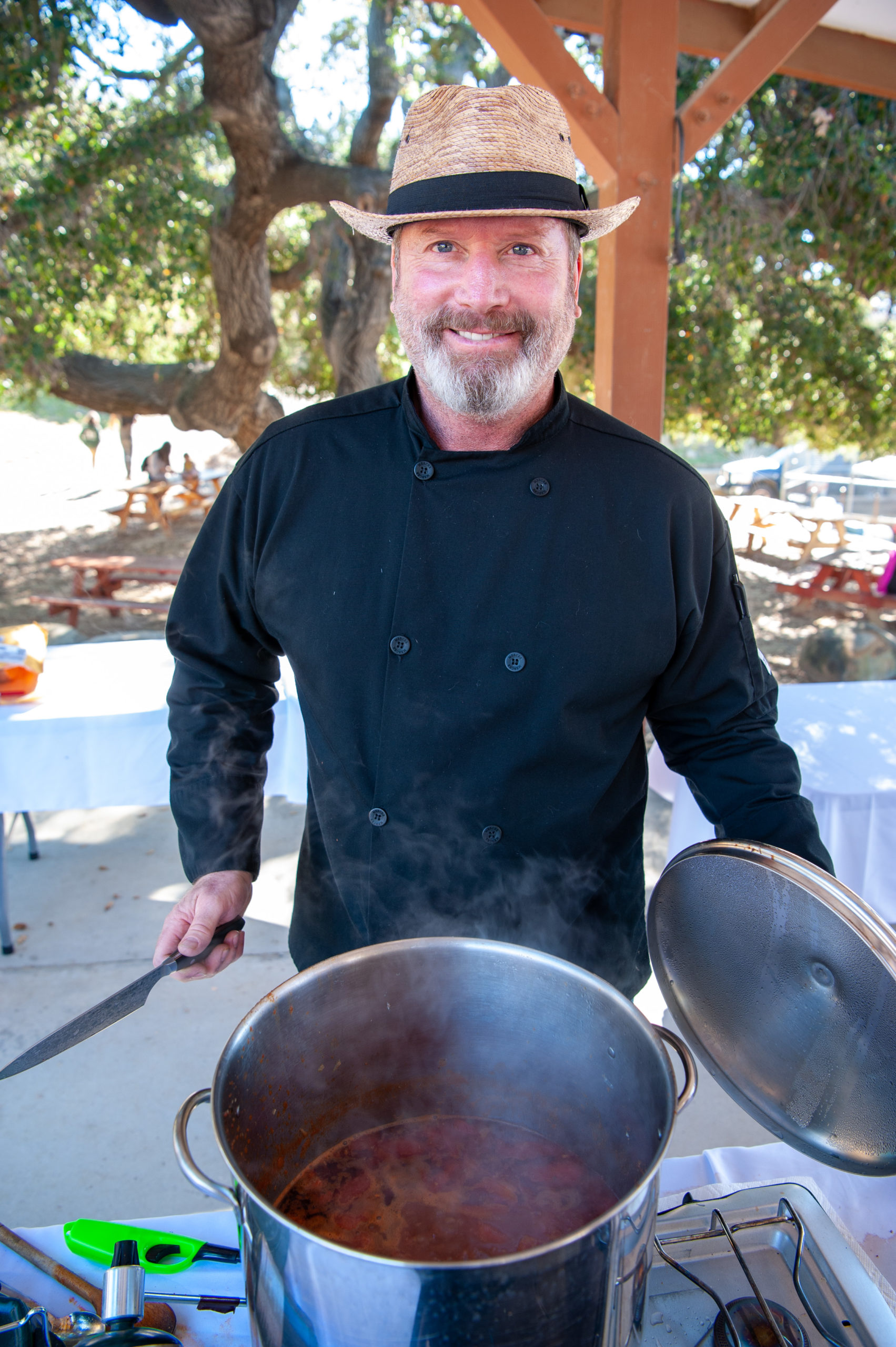 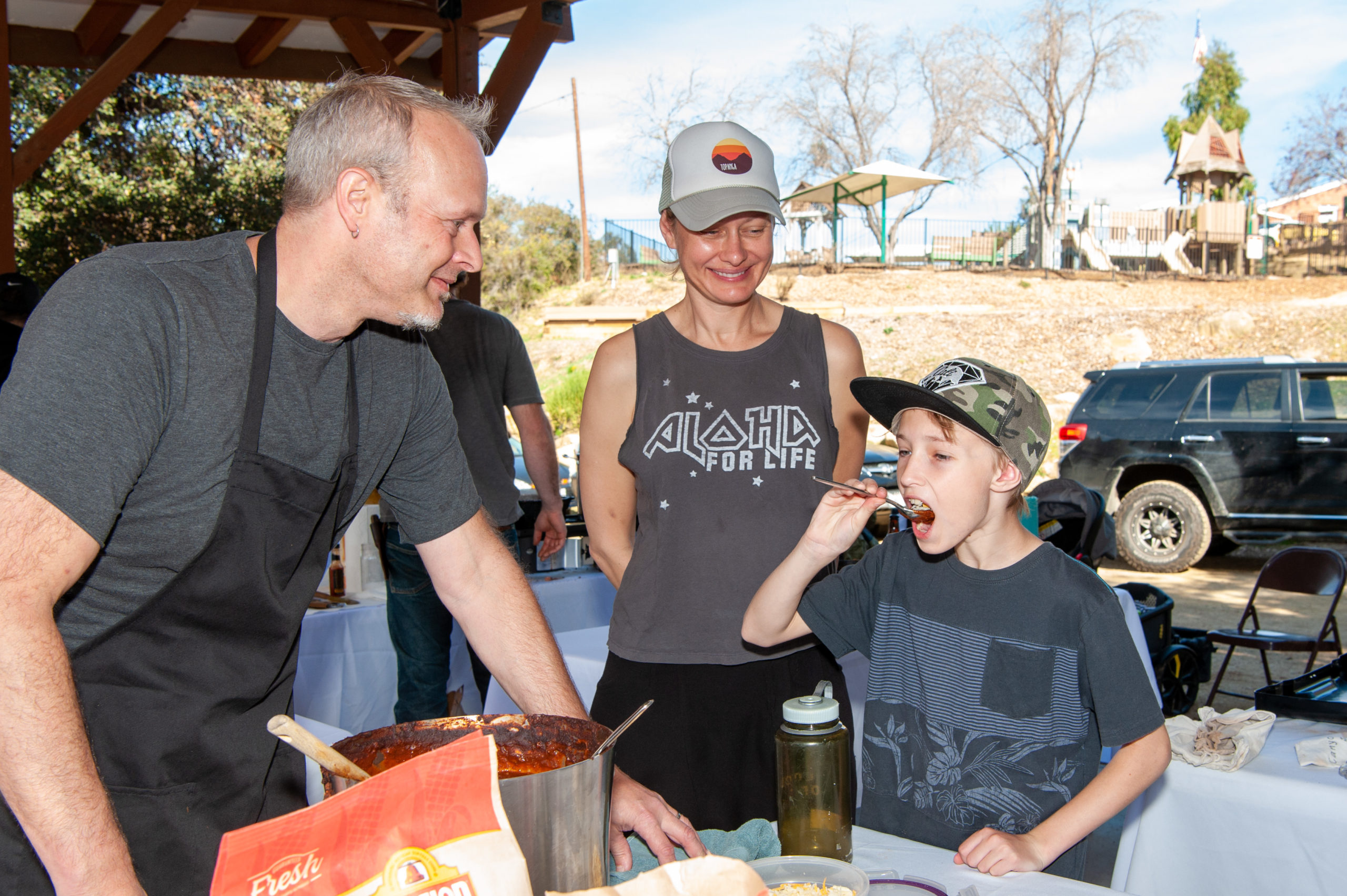 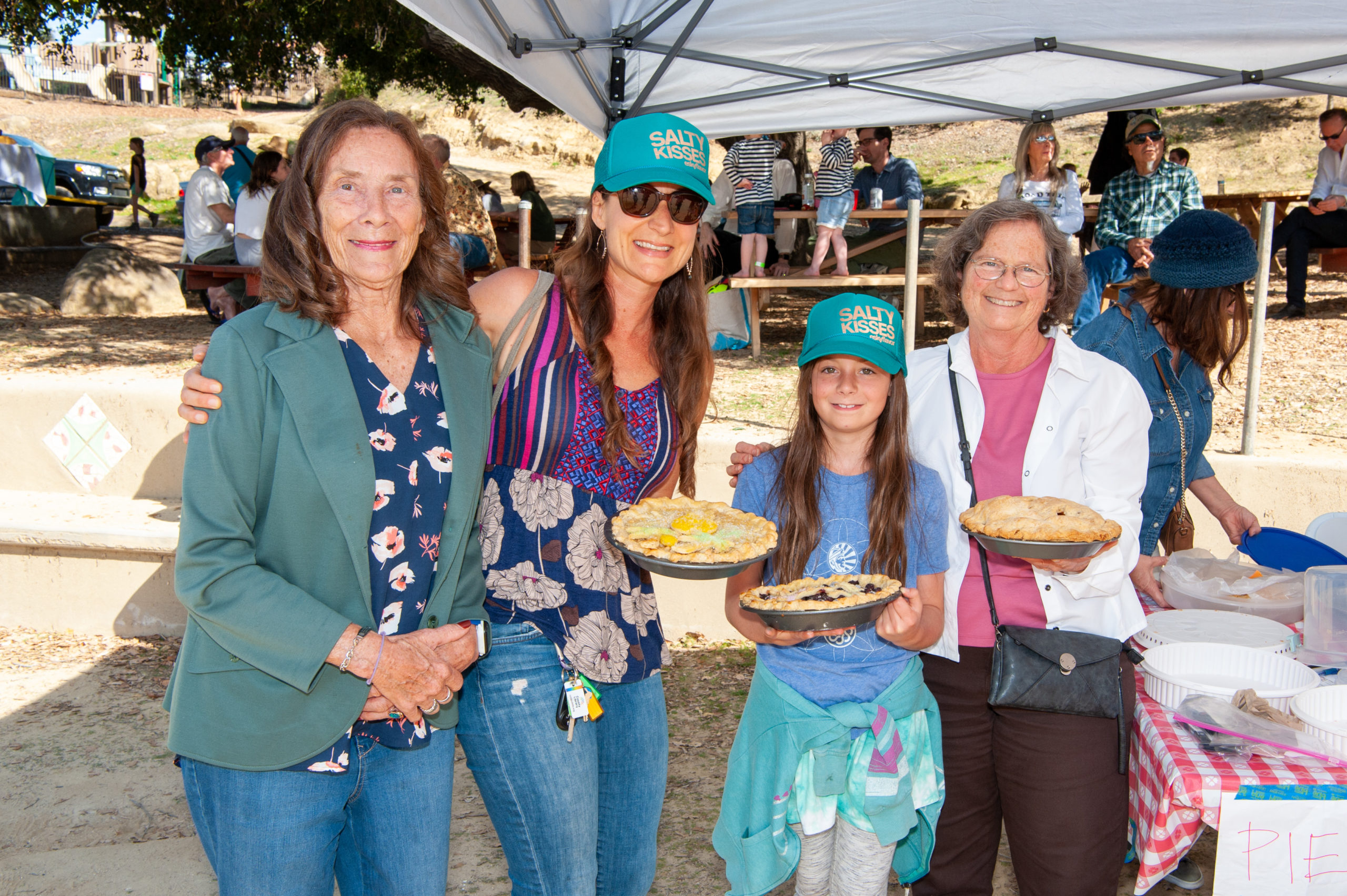 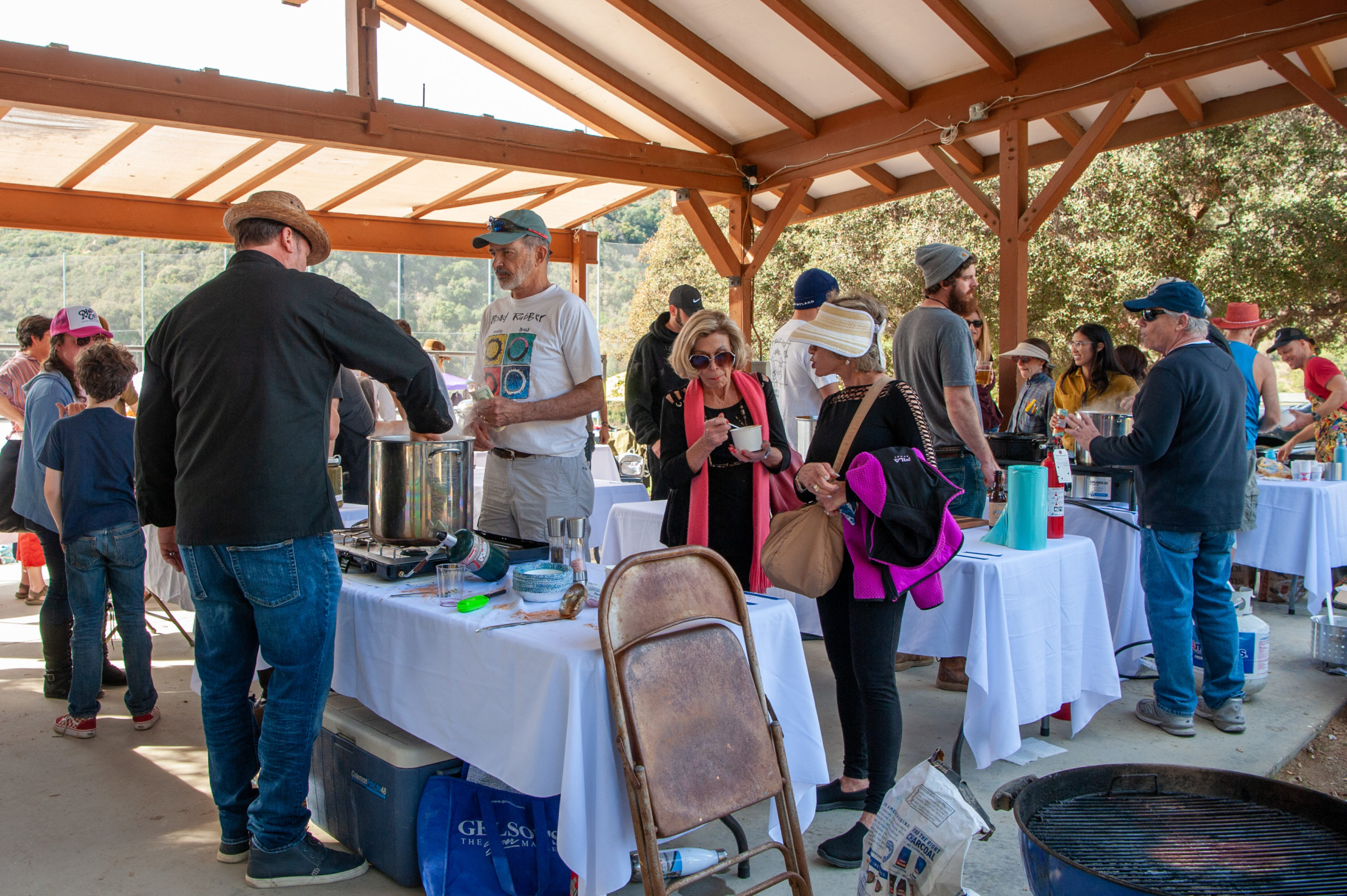 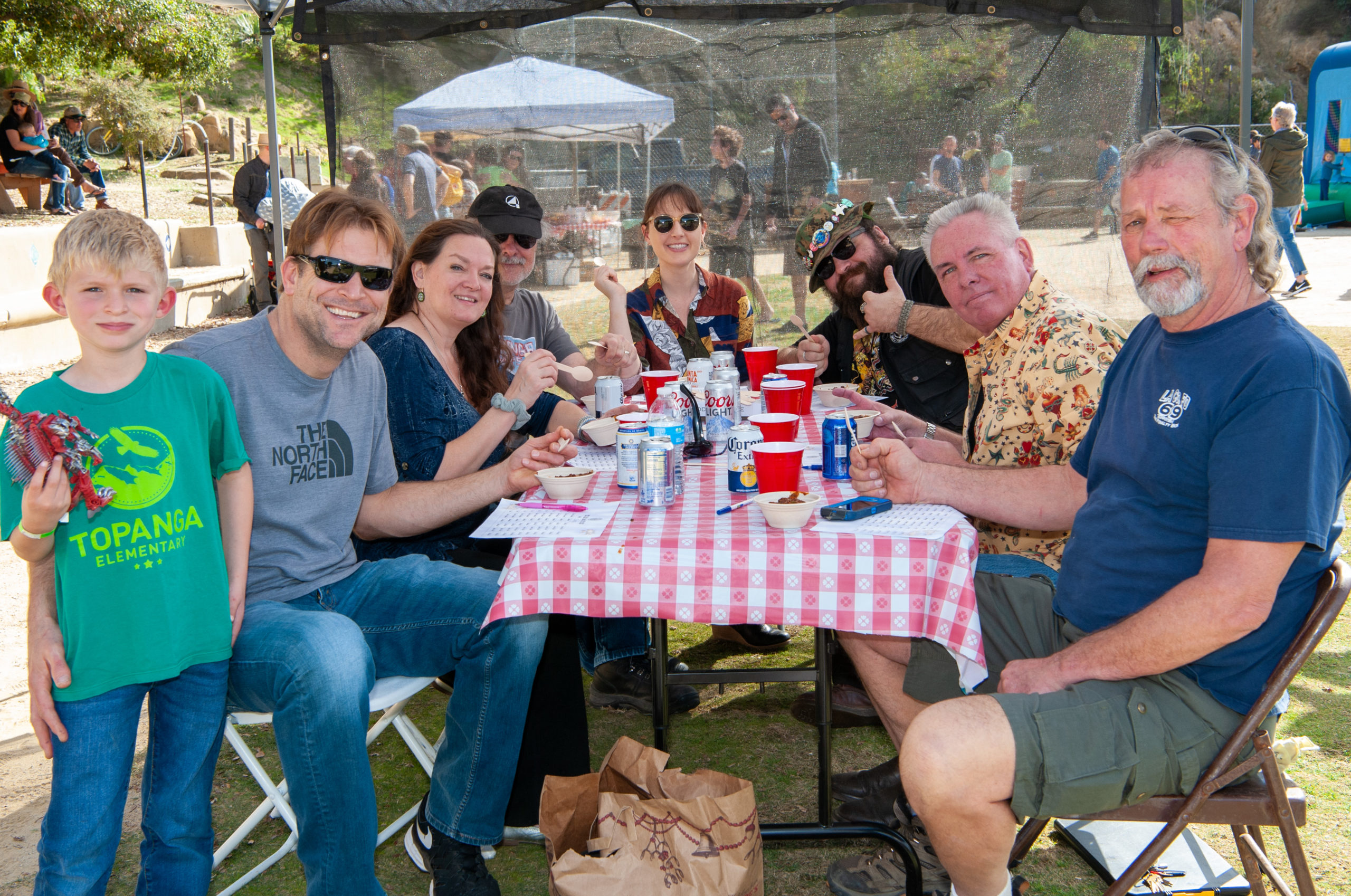 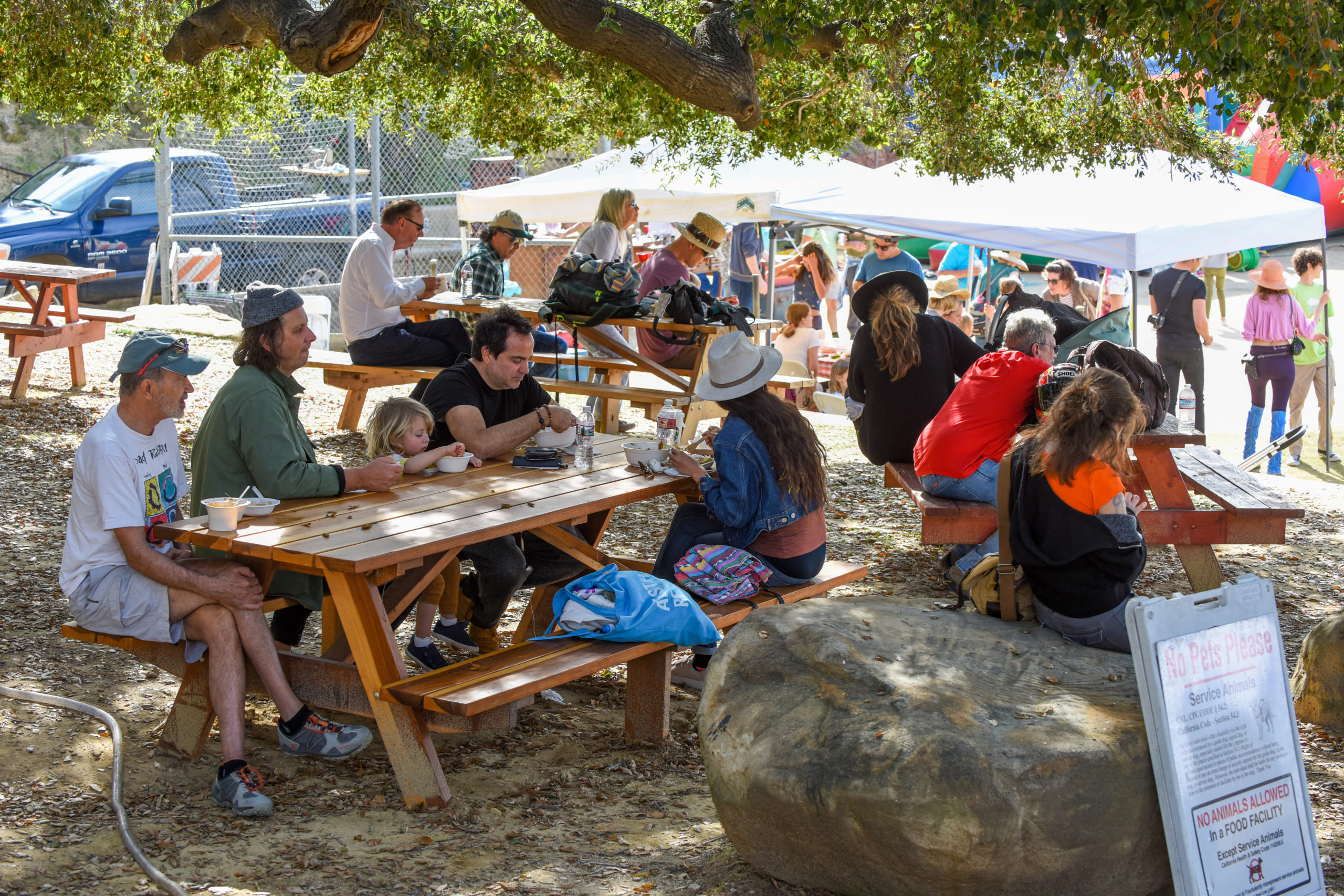 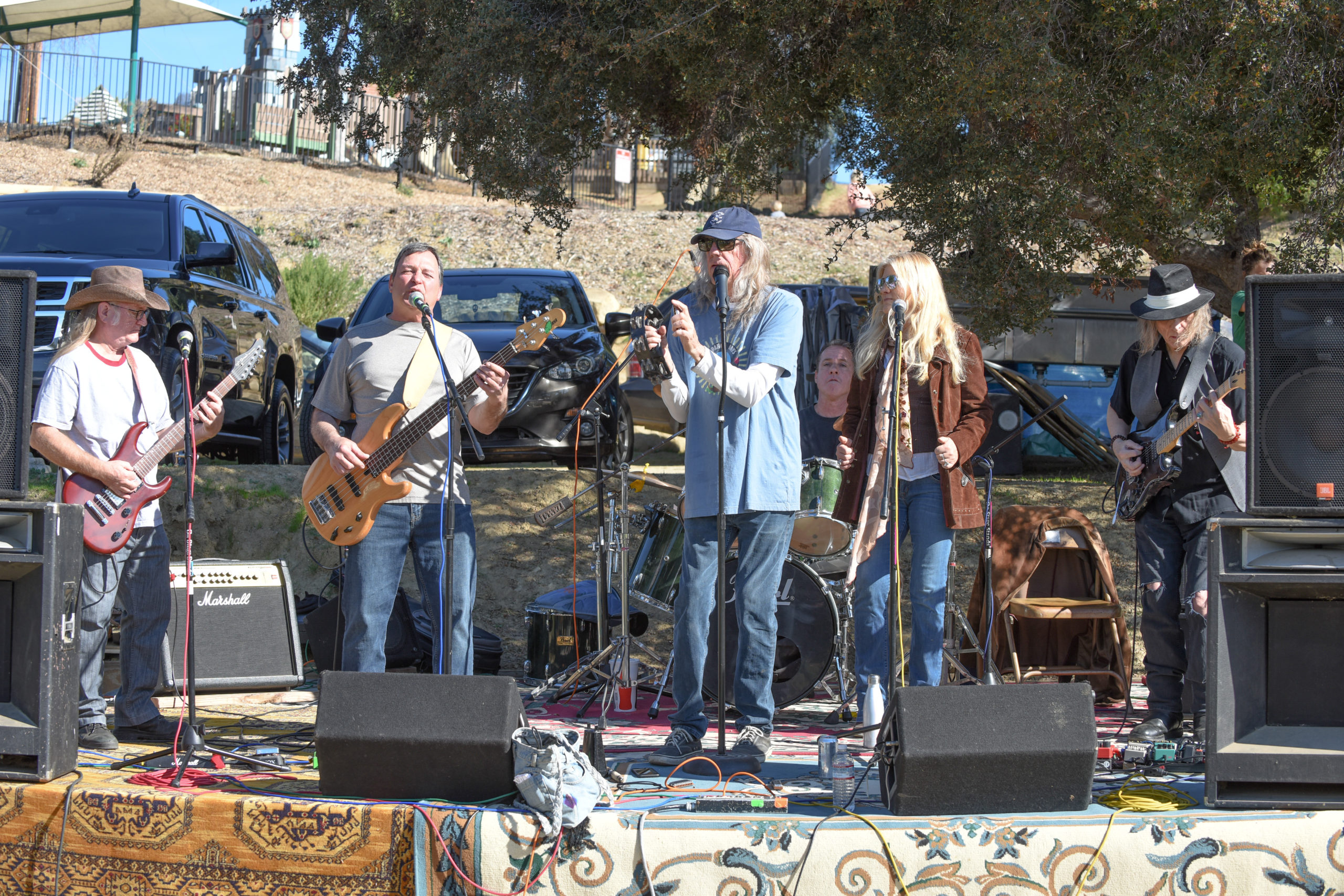 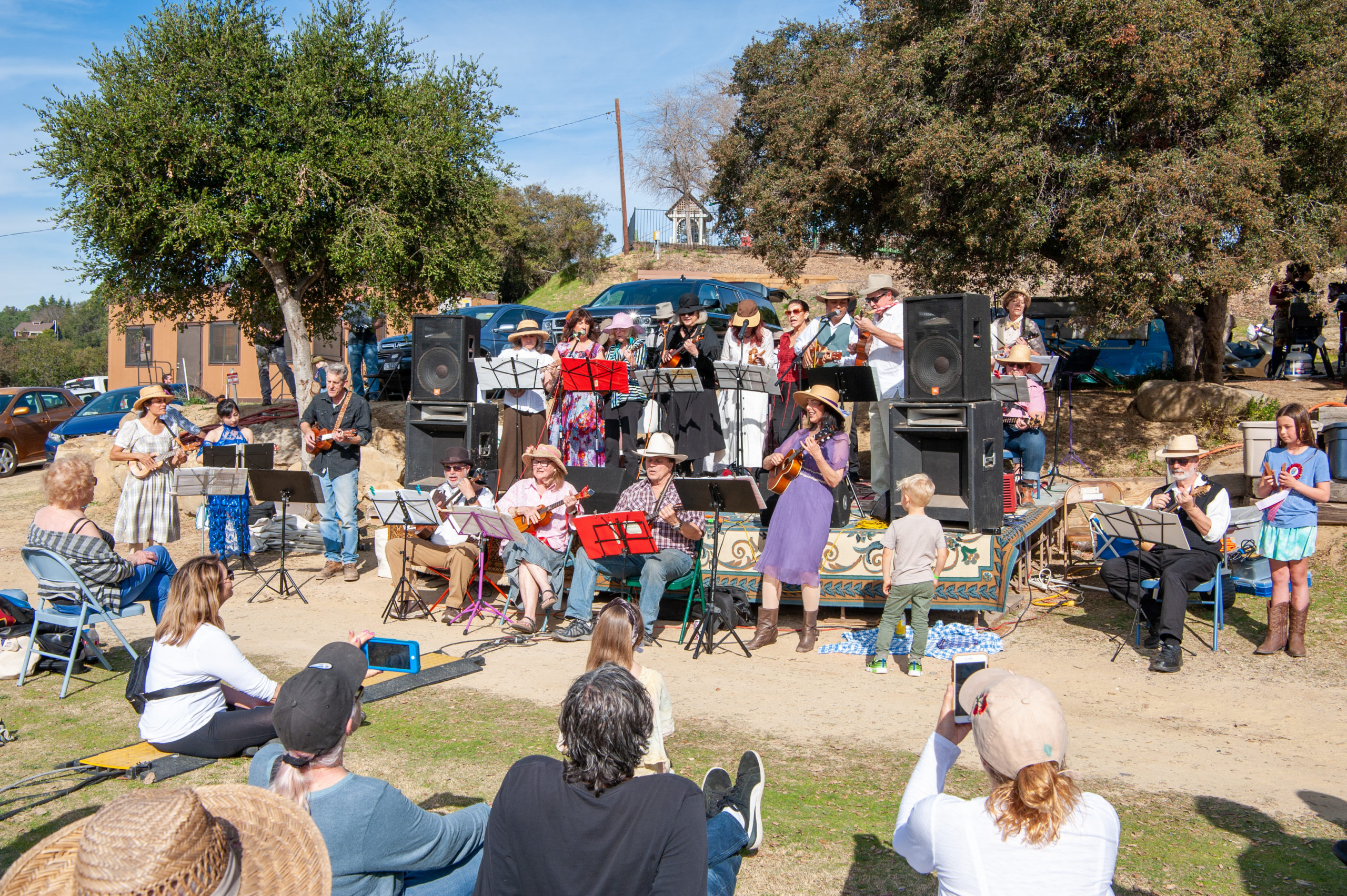 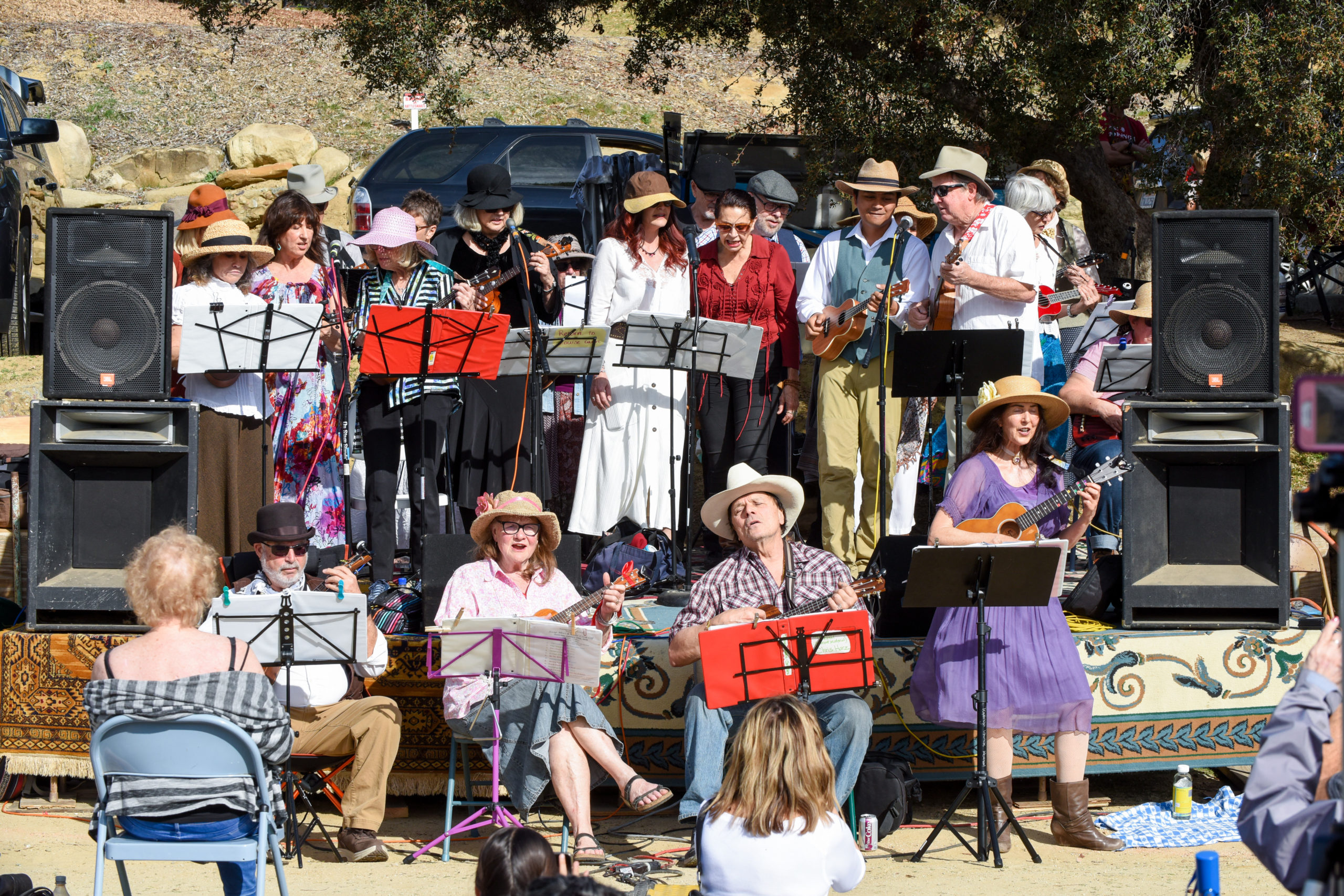 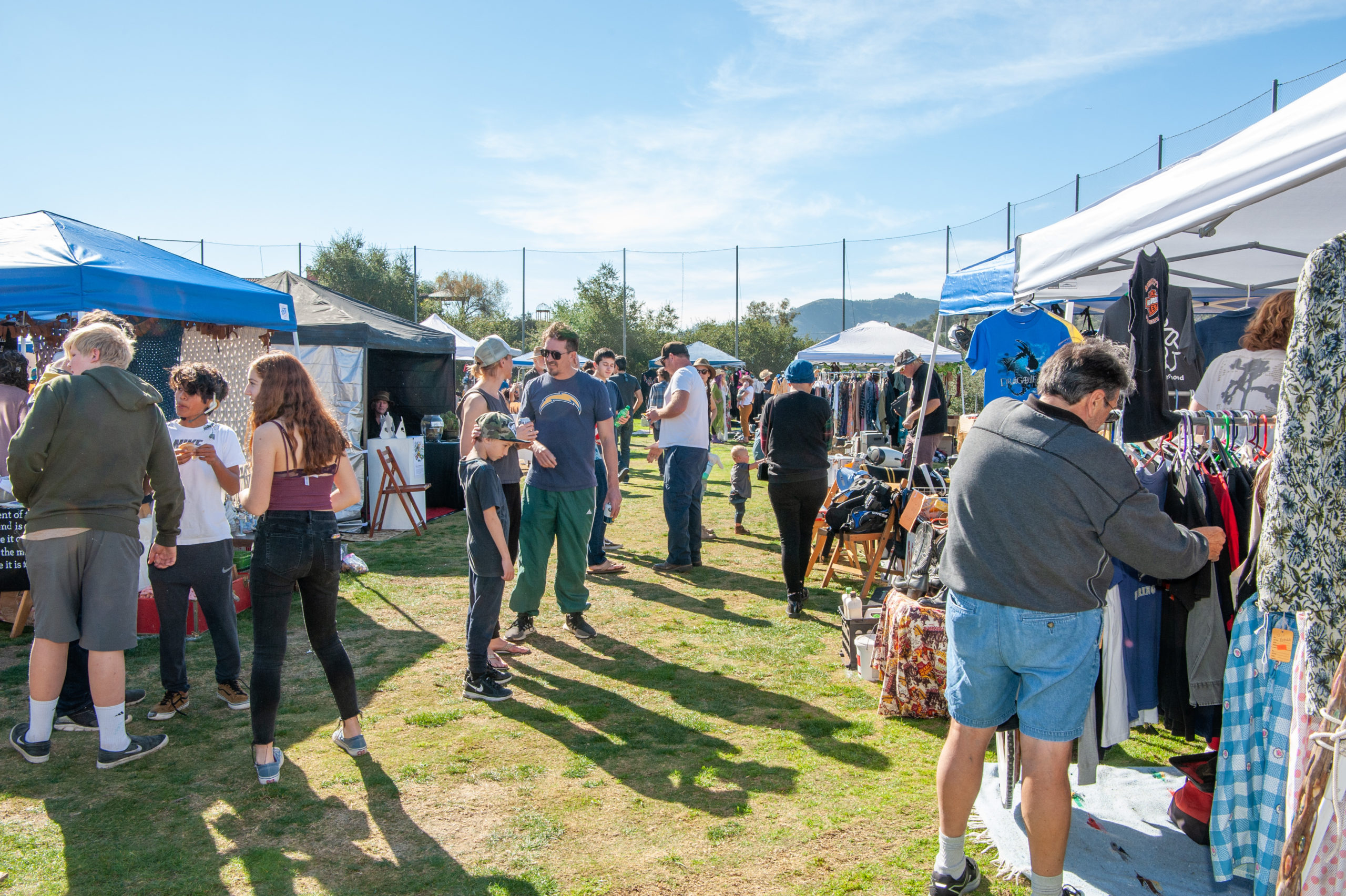 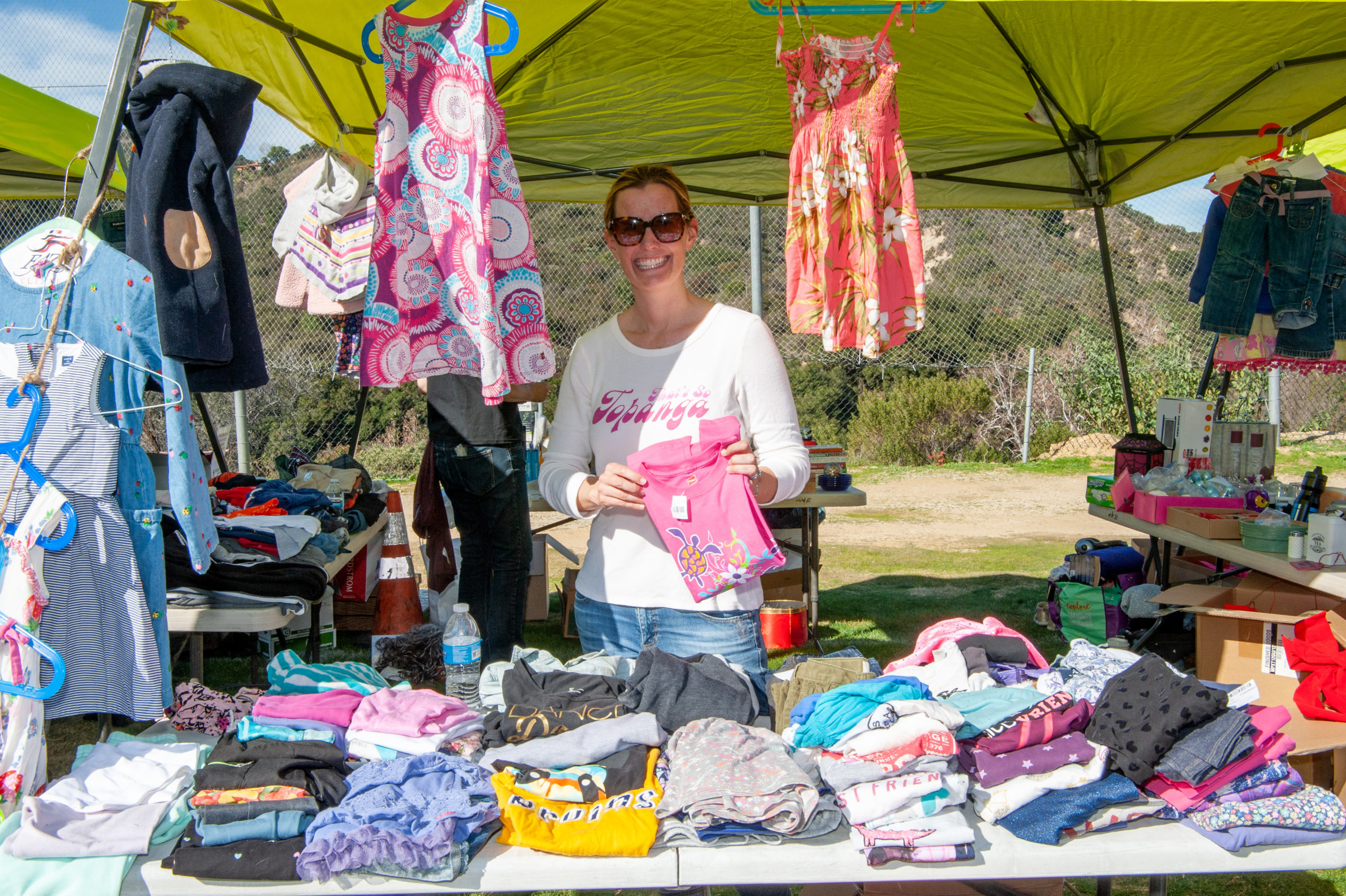 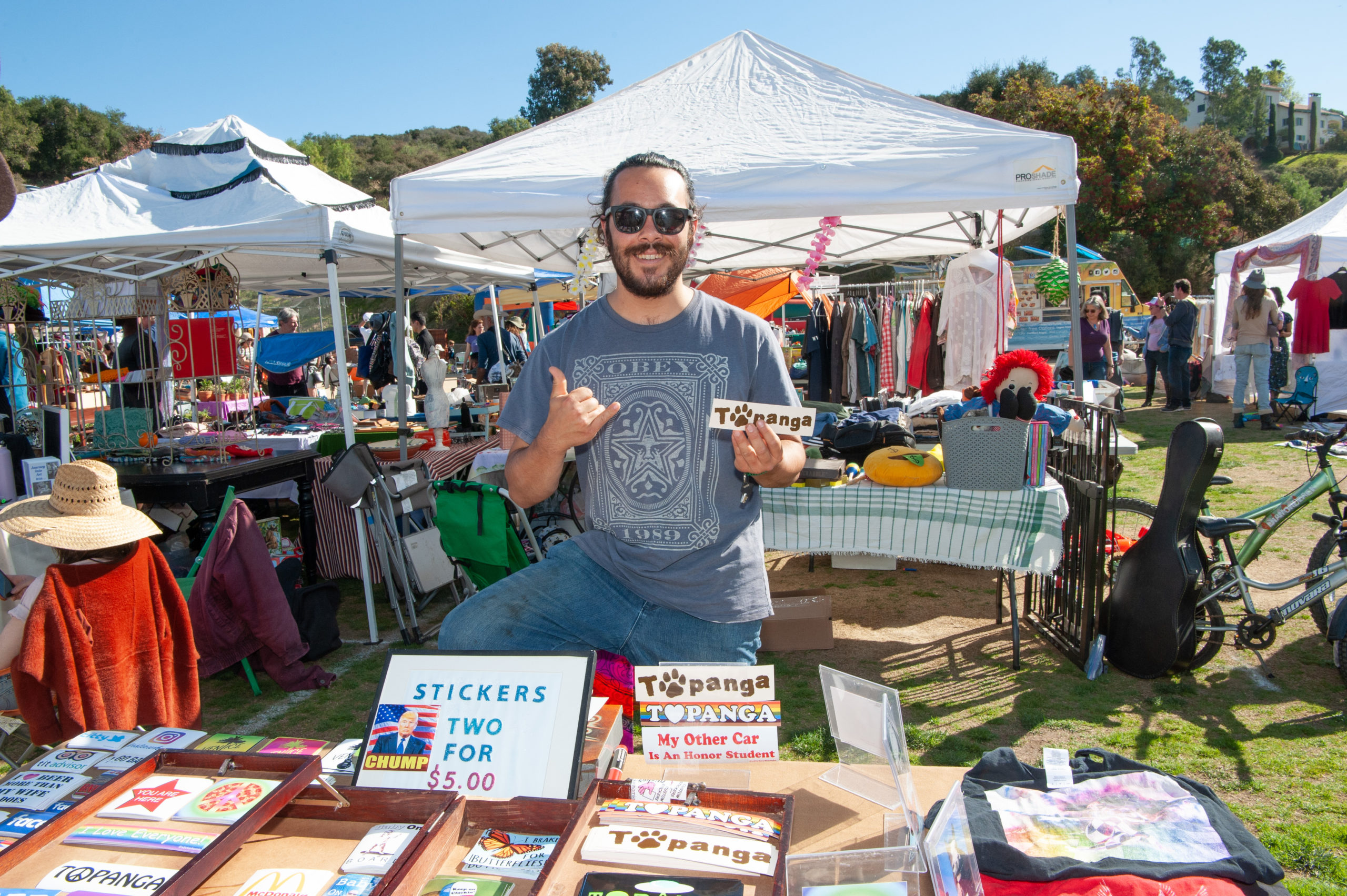 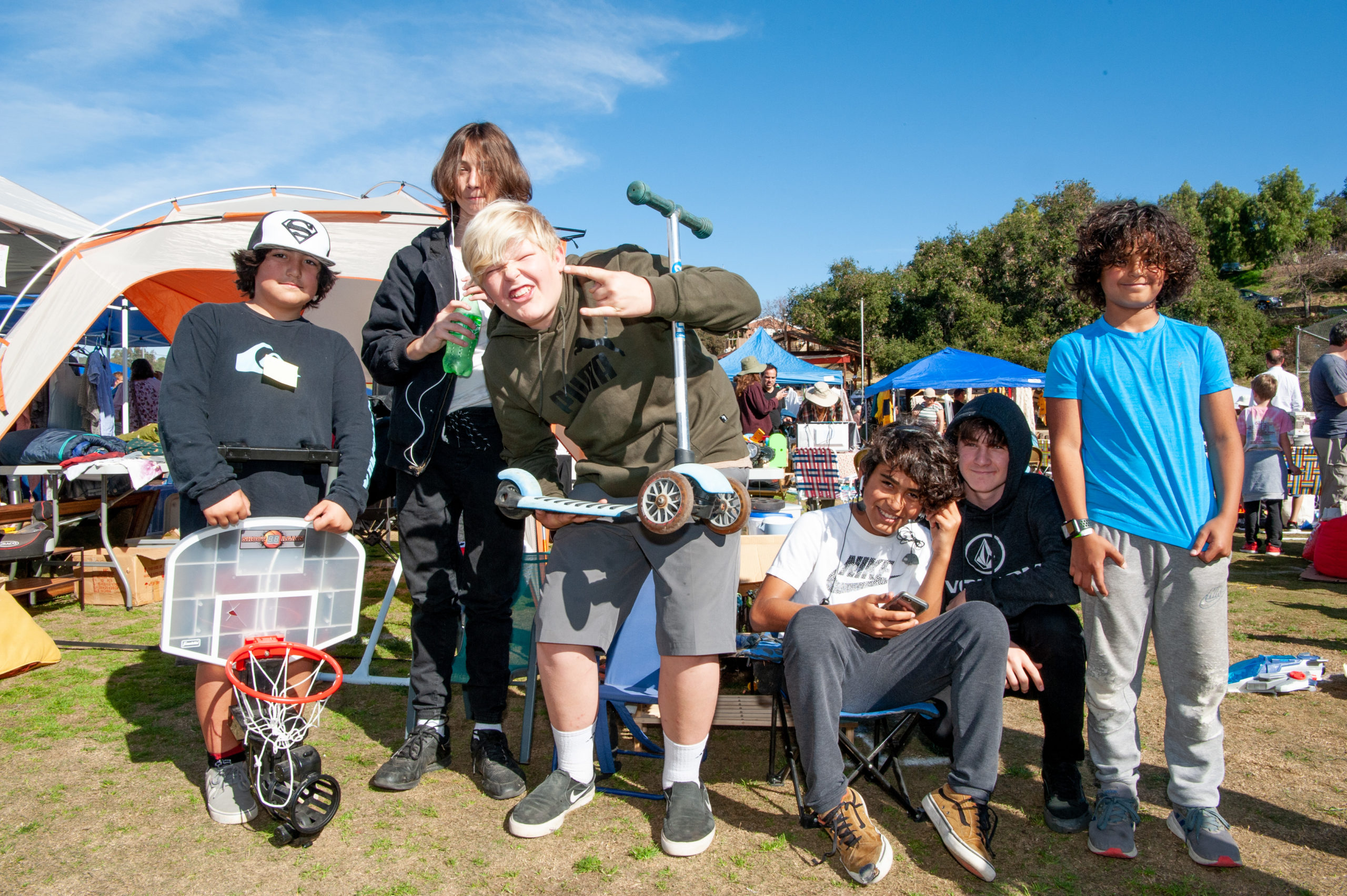 The sun shone warm and clear on Saturday, January 25, as seven contestants fired up their portable stoves onstage at the ballfield to stir up their hopes for a winning chili at the annual Chili Cookoff so beloved by Topangans!

Not to be outdone, there were about a dozen bakers who competed in the Apple, Non-Apple, Youth, and Most Beautiful contests.

The turnout was high with more than 40 vendors who brought clothes, books, electronics, records, bric-a-brac, and knick-knacks of all kinds for the swap meet.

There was also a giant bouncy house for the kids, plenty of beer on tap and a gourmet food truck for those who couldn’t wait for the chili.

Emcee Dan Shore kept the day fun and exciting by introducing the bands, hosting games, and announcing the chili and pie winners.

While walking among the booths, I came upon actor Thad Geer, who has won the cookoff with his chili designated as “The Best,” and included “the whole nine yards.”

Looking like the regal Queen of the Flowers, Abigail Zapata aka Gidget, held court in her colorful “Flower Power” booth, her shop at Pine Tree Circle. She and Madeline Auble surrounded themselves with an array of vintage clothes.

“We are just in love with vintage,” Zapata laughed. “We cleaned our closets out to get money to buy more vintage!”

Topanga’s much-beloved Marsha Maus, who lost her home in the Woolsey Fire, shopped for vintage perfume bottles and a stylish red jacket at her friend Gerlinda Gautrey’s booth, and Lola Babalon did a brisk business reading the Tarot and recommending elixirs.

First up at 10 a.m. with a great set of classic rock tunes was the Uncle Albert band with Tom Mitchell and Alison Freebairn-Smith on vocals; Al Johnson on guitar; Randy Chance on slide and guitar; Stevie Ray on bass, and Joe Stanley on drums.

To close out the day, the Topanga Ukulele Revival 30-piece band played traditional oldies and favorites as the crowd danced and sang along.

Of the five entries who made meat chili—John Bertolli, Trevor Bourget, Sean Colgin, Jon Siracusa, and Tyler Traband, the “Chili with Meat” winners, Trever Bourget and Orin Geer, took the title with their “Ass Kickin’ Meat Lover’s” chili for three years in a row now. With his “Friend of the Devil” chili, Jon Siracusa earned second place with his very meaty dish featuring bison and wagyu beef.

The vegetarian chili first-place winner was Orrin Charm, who created his “Impossible Chili” and served it over couscous. Second place for vegetarian chili was Tom DuKet with his “Magic” chili. The overall chili winner was Trevor Bourget with Orin Geer. An honorable mention went to Tyler Traband for his chili infused with chipotle and cocoa.

Regardless of who won, all of the chili sold out to a most appreciative crowd.

IN PIE WE TRUST!

“Beauty is in the Pie of the Beholder” was the motto of the day and this year’s pie contest was billed as grandmas versus grandchildren, experience versus youth!

Trevor Bourget and Sam Welsh won first and second place, respectively, for their apple pies. Karen Dannenbaum won an honorable mention for her apple pie—the judges said it was a “close call, 76 points for Dannenbaum, 77 for Welsh.”

The Swap Meet and Chili Cook-off, a fundraiser for the Topanga Community Center, is usually held in November, but was rescheduled due to the number of wildfires that month and Santa Ana winds pushing them.

“We were disappointed that we had to move the event to January, but it’s proven to be a great way to start the New Year,” said Kelly Rockwell, board president of the Topanga Community Center.

Indeed, people came out in droves, even walking up the long driveway from the Boulevard where they had parked.

“It’s inspiring to see so many enthusiastic Topanga neighbors supporting each other in all avenues; chili, pie, music, and swapping,” Rockwell said. “It’s a beautiful Topanga tradition.”

For more information or to join: https://topangacommunitycenter.com.

What the Constitution Meant to Her