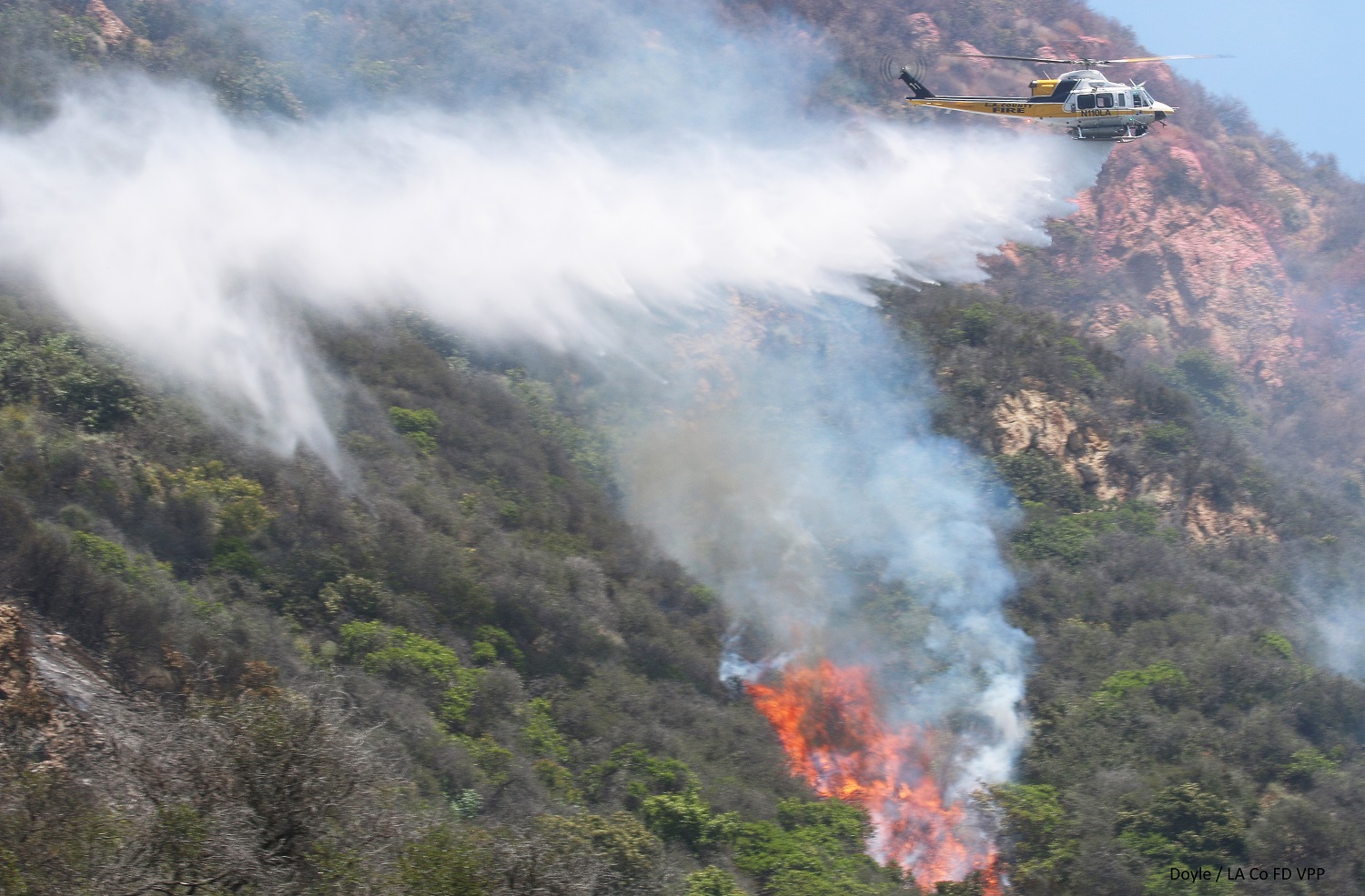 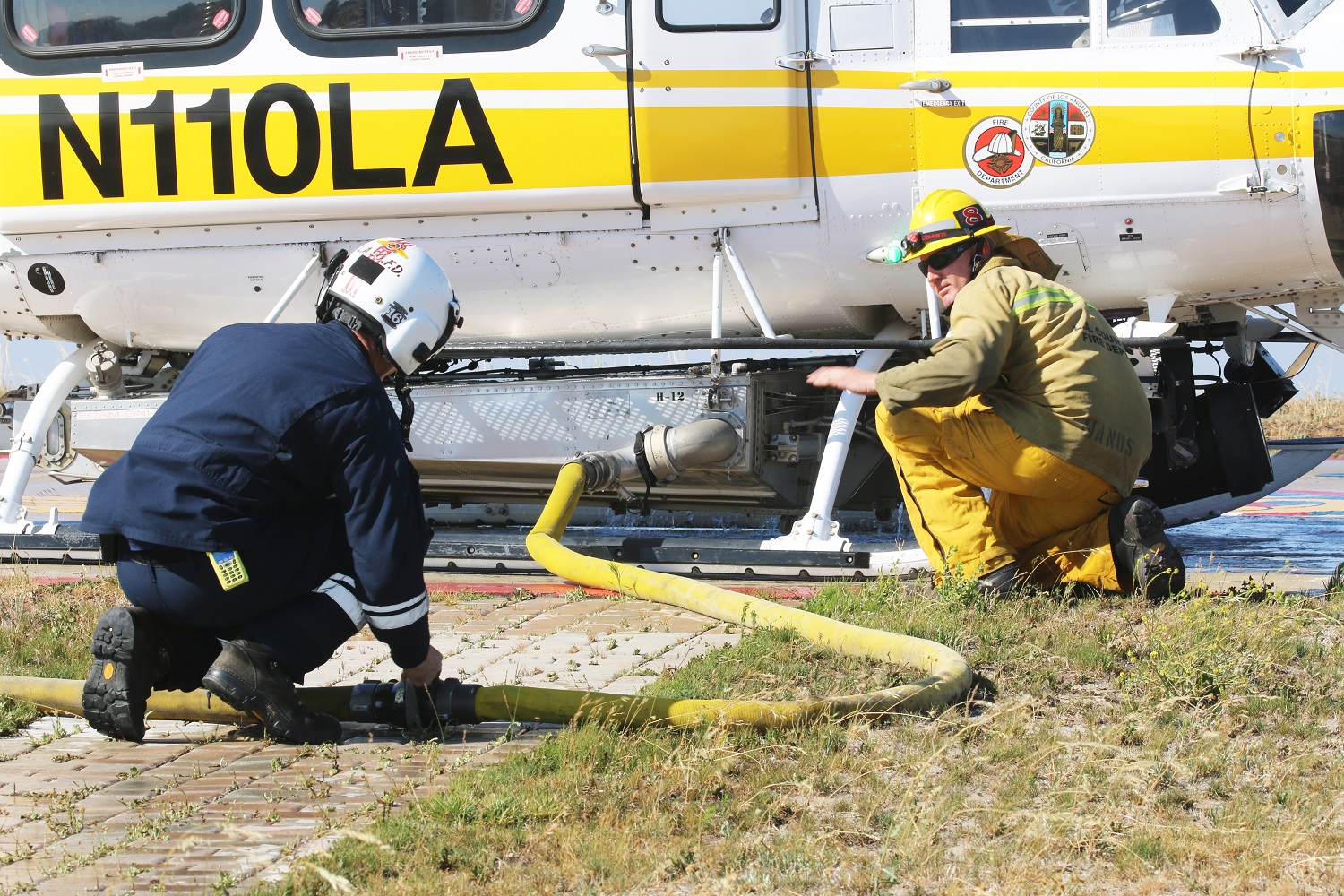 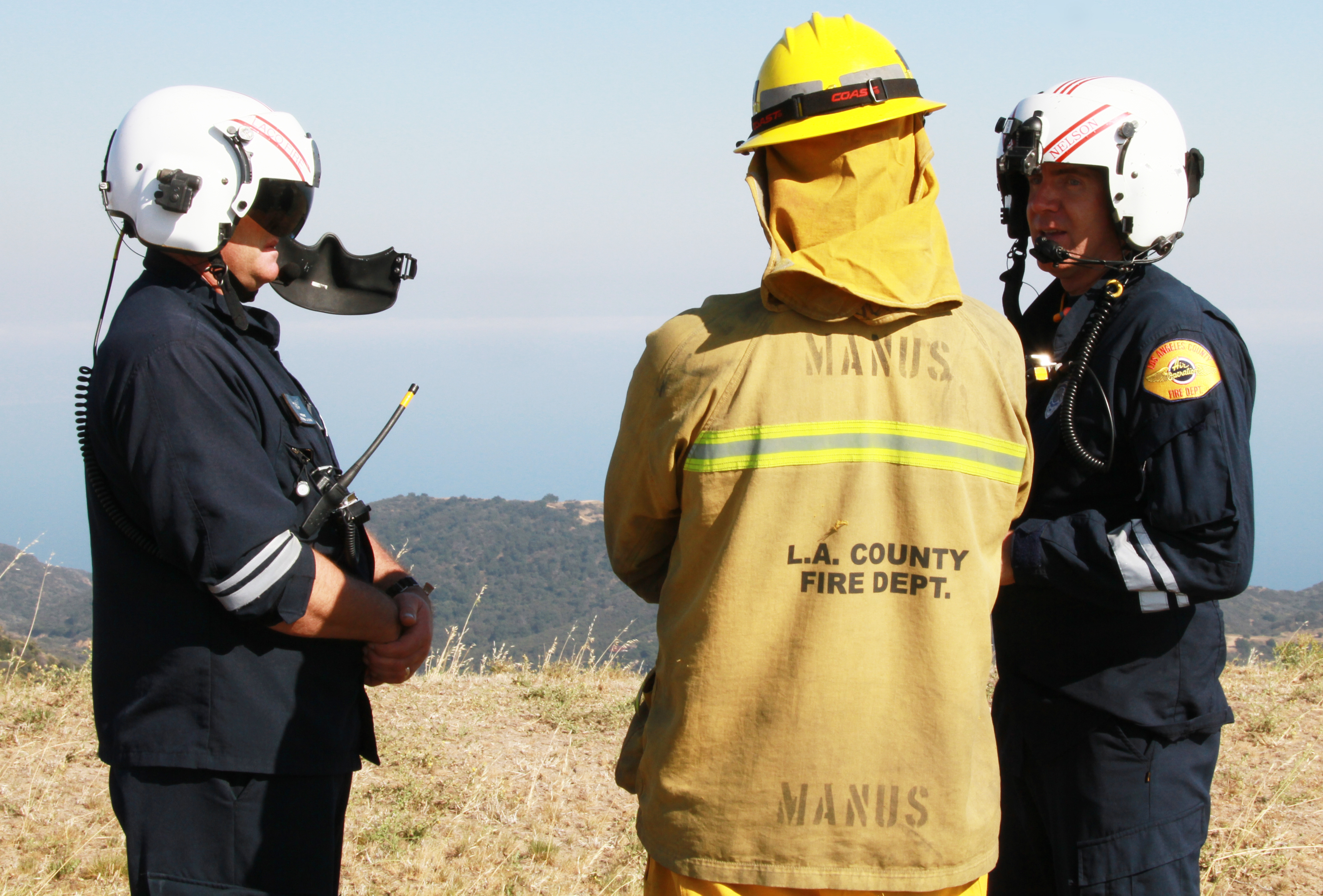 Support crew on call to refuel the Bell. Photos by Greg Doyle 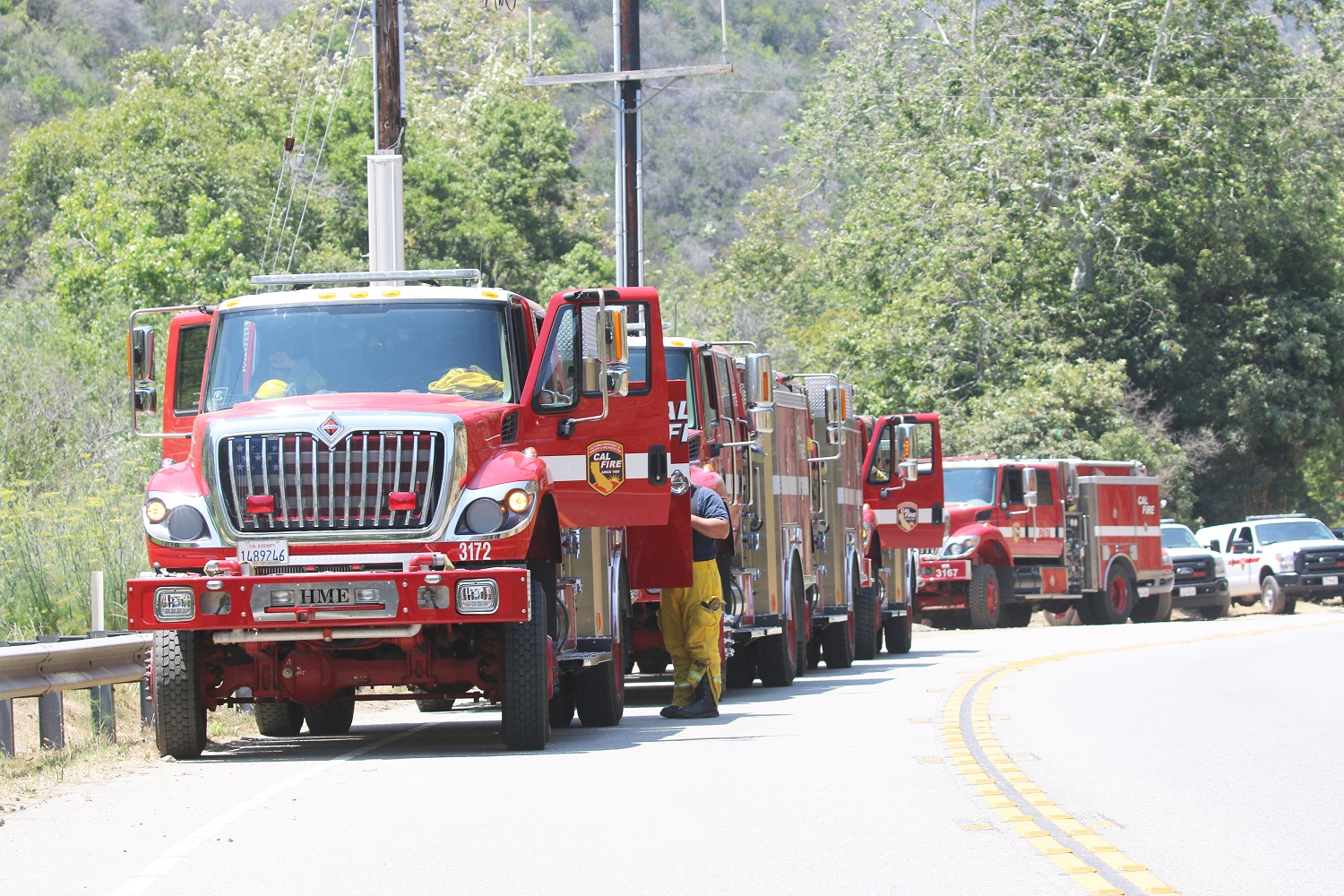 L.A. County Fire Engines lined up along Topanga Canyon Blvd. When fire crews couldn't get into the terrain they did some needed roadside brush clearing. Photo by Greg Doyle 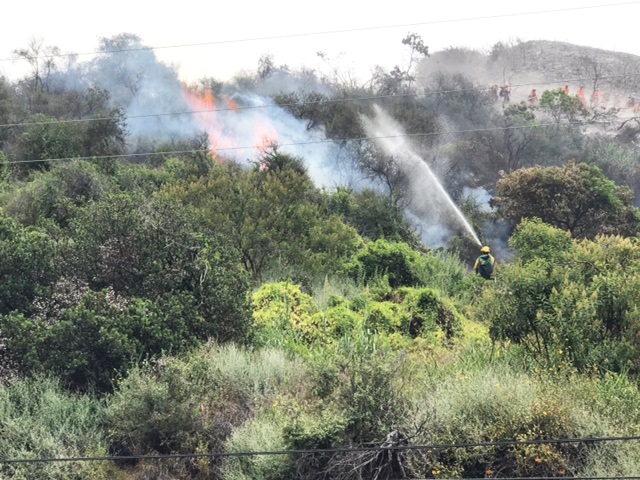 MRCA Call firefighters were deployed to both the Topanga Fire (above) and Stokes Fire in Calabasas. Photo by Ed Edmiston 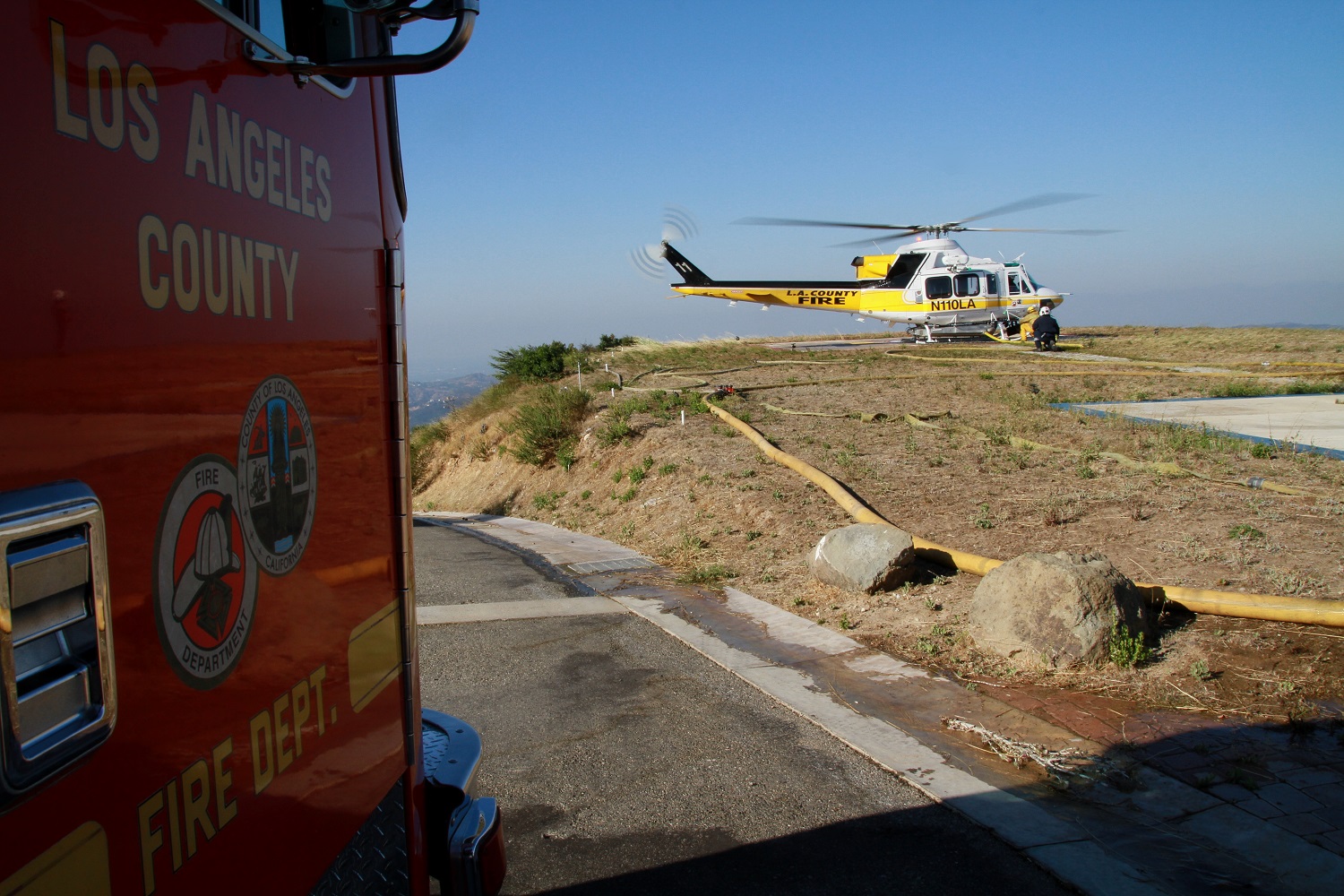 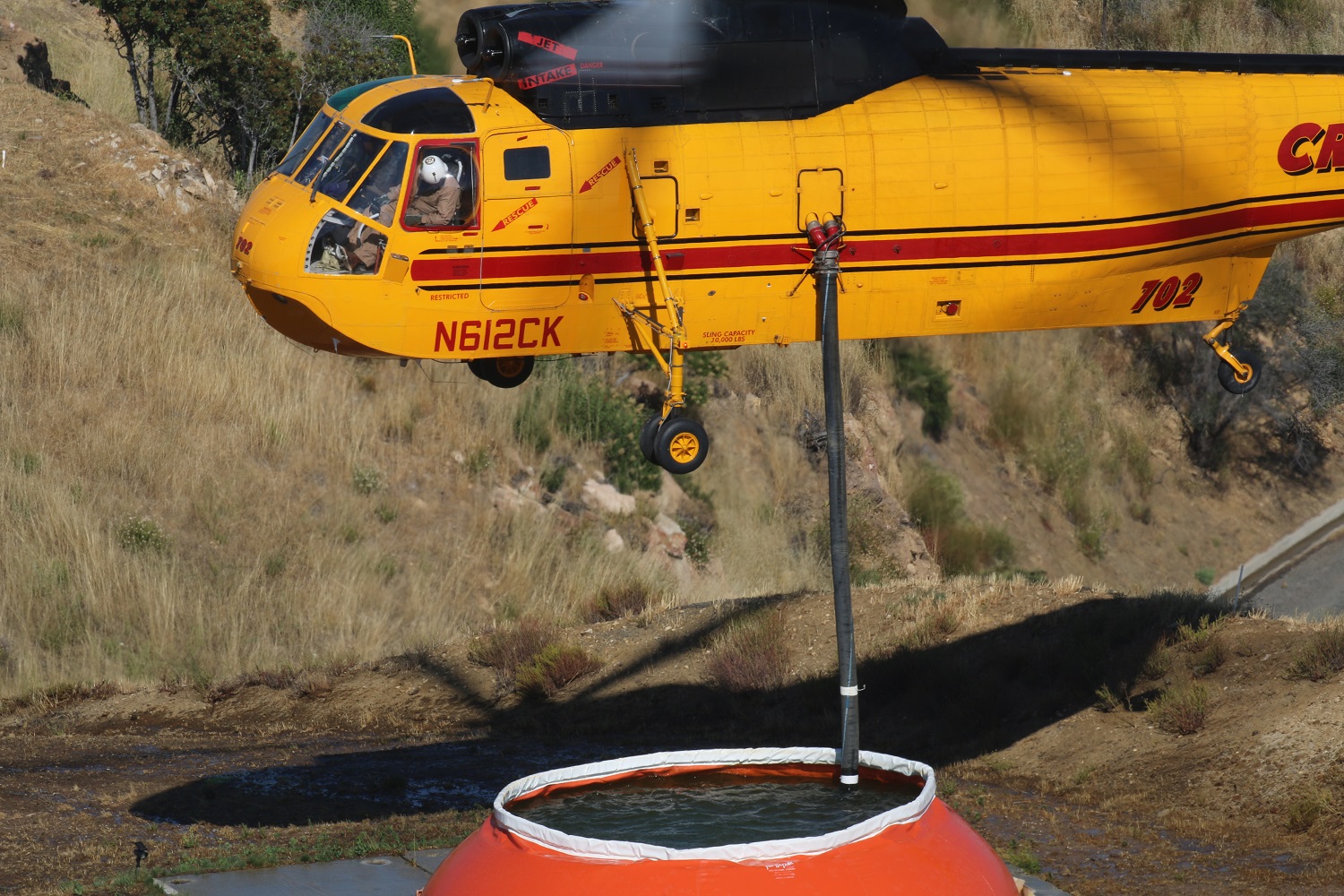 Around the same time as the Stokes fire broke out at Mulholland Highway and Las Virgenes Road (2:54 p.m.) on June 29, Susan Nissman and her friends were just pulling onto Topanga Canyon Boulevard from PCH when they were stopped behind a line of cars. Fire!

“You could hear the crackling of the brush, see the early flames. It was pretty scary,” she said. “We scooted by the other stopped vehicles, called 911, stopped at Fire Station 69, then came home.”

The Topanga Fire started about a mile north of PCH—an area where fire could rage north into Topanga State Park, south towards the Palisades Highlands just over the ridgeline, or jump the Boulevard and tear into Fernwood. It is one of the reasons Topanga Canyon has the designation of Very Severe Fire Danger. The area is almost vertical terrain with impenetrable brush and trees that haven’t burned for at least 50 years.

Within the first 15 minutes, L. A. County Fire Department (LACoFD) declared this incident as a “three-alarm” fire and called up five strike teams totaling 25 engines. The first firefighters to arrive at the fire were unable to get their hoses up the steep terrain or through the dense vegetation to fight the fire.

A call immediately went out to the LACoFD Aero Bureau for two Fire Hawk water-dropping helicopters, each with a 1,000-gallon capacity. Initially, only one Fire Hawk was available and was deployed to Topanga’s 69 Bravo Fire Base where four pumpkins holding a total of 36,000 gallons of water were instantly available. In a matter of minutes, the Fire Hawk began dropping its first loads on the fire.

Within an hour another LACoFD Fire Hawk was deployed and worked in tandem with the first helicopter to attack the fire. In the five hours of remaining daylight, the two Fire Hawks exclusively drew from 69 Bravo at least 42 times and dropped more than 40,000 gallons of water on the fire.

Overnight and into Friday morning, the fire was close to being contained when the winds picked up around 1 p.m. and the fire flared again. By 1 p.m., two additional fire-fighting helicopters appeared at 69 Bravo to fight the fire: County Fire’s Bell 412 and, from Fox Field in Palmdale, a large “type 1” helicopter—the Sikorsky 61 heavy-lift helicopter, with a 1,000-gallon water capacity.

Soon after, LACoFD secured and added one of the biggest fire-fighting helicopters in the world, the Sikorsky Sky Crane to their resources. Standing about two stories tall and able to pick up more than 2,000 gallons of water at a time, the mighty Sky Crane went into rotation with the other four helicopters.

At times, the five helicopters were picking up more than 5,000 gallons of water from 69 Bravo and dropping it on the fire every 10 minutes. That’s roughly 2,000 gallons every two minutes.

Five helicopters and five pilots had to have a plan to coordinate their timing so when one was dropping, another was dipping and another was coming in behind in perfect rotation. At times, all five were in the air snorkeling up more than 5,000 gallons of water to dropping roughly 2,000 gallons every two minutes on the fire.

By Friday night, day two of the fire, the Los Angeles County Fire Department’s Aero Bureau and contract helicopters had made 160 round trips from 69 Bravo to the Topanga Fire, dousing the fire with about 140,000 gallons of water in roughly nine hours.

Firefighters continued to fight the fire on the ground and in the air into Tuesday July 4, containing it to 55 acres and potentially saving the Fernwood area, Topanga, Coastline homes (just a ridgeline away from the fire), other mountain communities and, of course, our irreplaceable State Parklands.

Richard Licon, Fire Inspector for LACoFD, was at the fire site for the first hour. “I didn’t think we’d be out there that long.” A week later, well after the fire was controlled, he said, “We still have a fire crew and patrol in the area to make sure nothing goes through it again.”

As Topanga residents realized this fire was being fought almost exclusively by fire-fighting helicopters, the conversation  on Nextdoor Topanga came alive with cries to “Save 69 Bravo.” Residents are nervous about losing this resource and Supervisor Sheila Kuehl and County Fire undoubtedly received a number of letters, e-mails and phone calls as a result.

For five years, 2,500 feet above the Topanga community on Saddle Peak, 69 Bravo quietly sits with an enormous supply of water in an installation that is instantly available to fire-fighting helicopters before the first fire engine crew finds their way up to 69 Bravo to support them.

When all was said and done and the fireworks went off around Southern California the evening of July 4, the fire-fighting helicopters had flown to 69 Bravo more than 230 times and extracted more than 225,000 gallons of water—enough to fill half an Olympic-size swimming pool!

Asked about 69 Bravo, Licon said, “Knowing it was right there was a huge bonus for us. Being that close, instead of [the time it would take] to refill at Calabasas or Pepperdine… those minutes add up exponentially. I can’t express how important that station was for us.”

Licon also praised the Topanga residents for their brush-clearing efforts this year.

Topanga’s profound gratitude goes out to those who controlled a small fire that could have consumed most of Topanga Canyon and adjacent areas, and who are most likely deployed to fight other fires currently raging throughout the county and state.

To ask the County not to decommission 69 Bravo, write, e-mail or call: