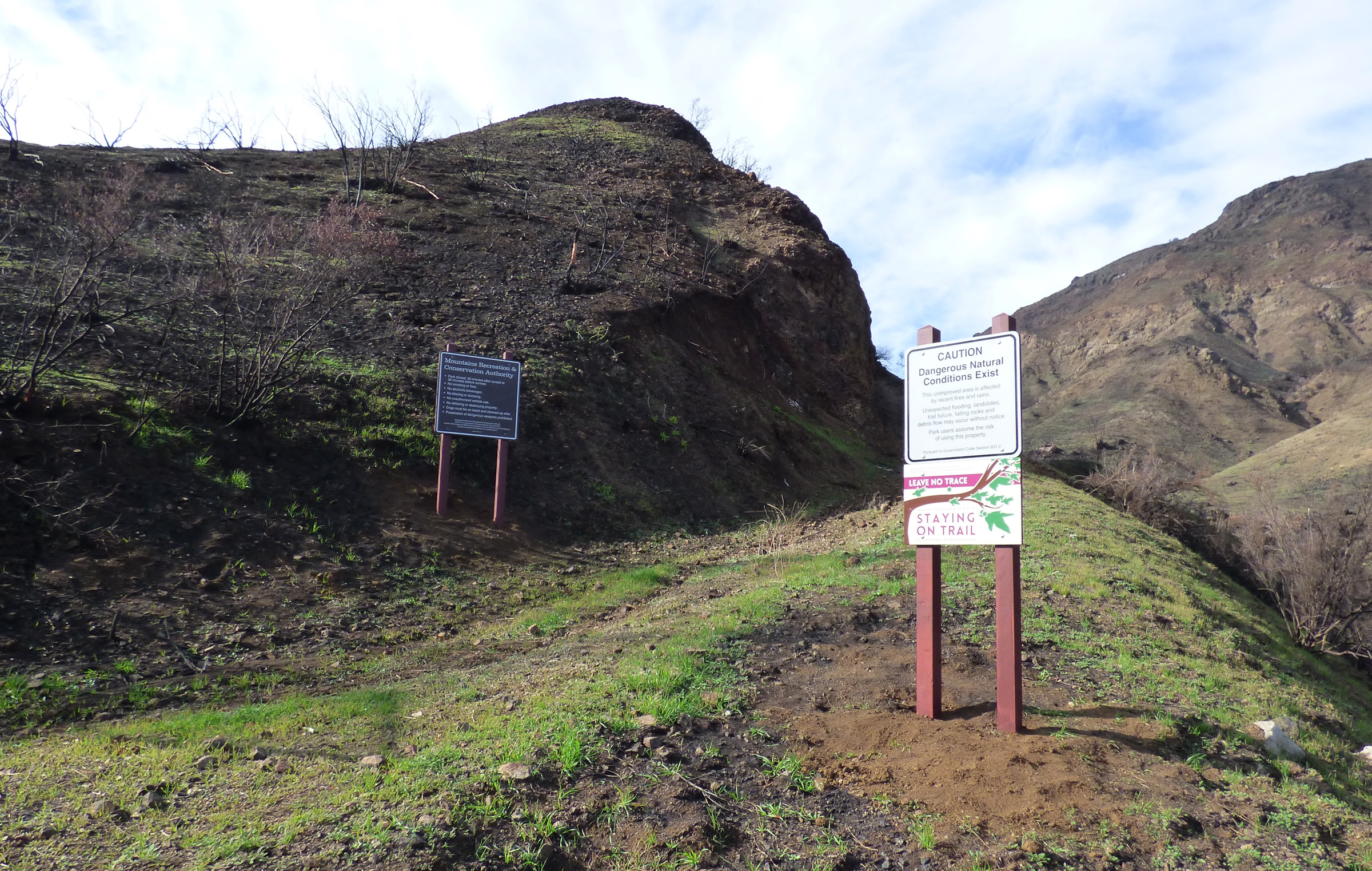 New signs welcome visitors to the MRCA’s newly reopened parks and remind everyone to stay on the trails and watch for hazards. Replacing park signage has been a major project for the MRCA—hundreds of signs for everything from parking signs at trailheads to trail markers were destroyed during the fire. Photos by Suzanne Guldimann 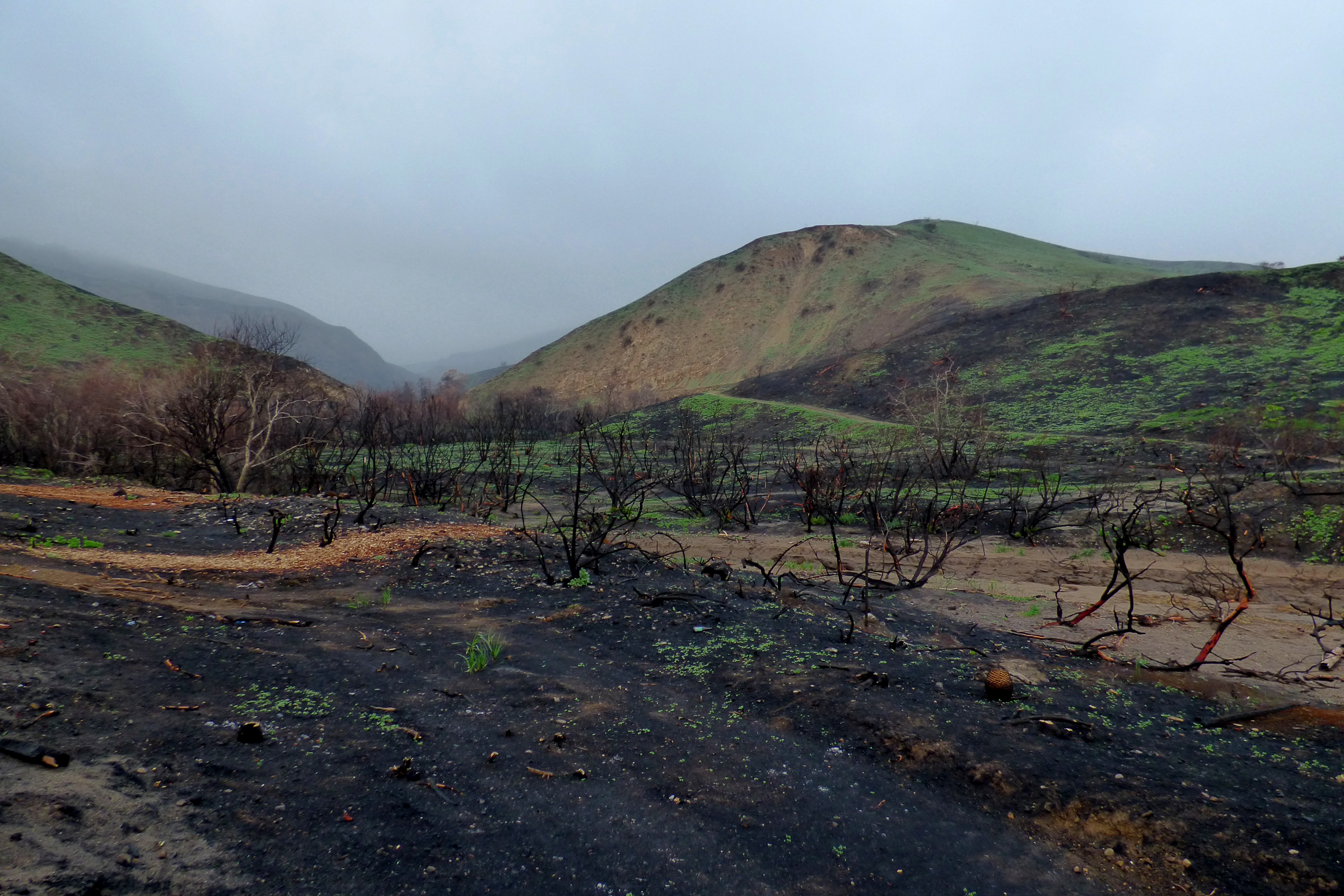 The Mountains Recreation and Conservation Authority’s newly reopened Corral Canyon Park, widely featured on the news immediately following the Woolsey Fire as a symbol of the destruction caused by the fire, is open again and already beginning to regrow. 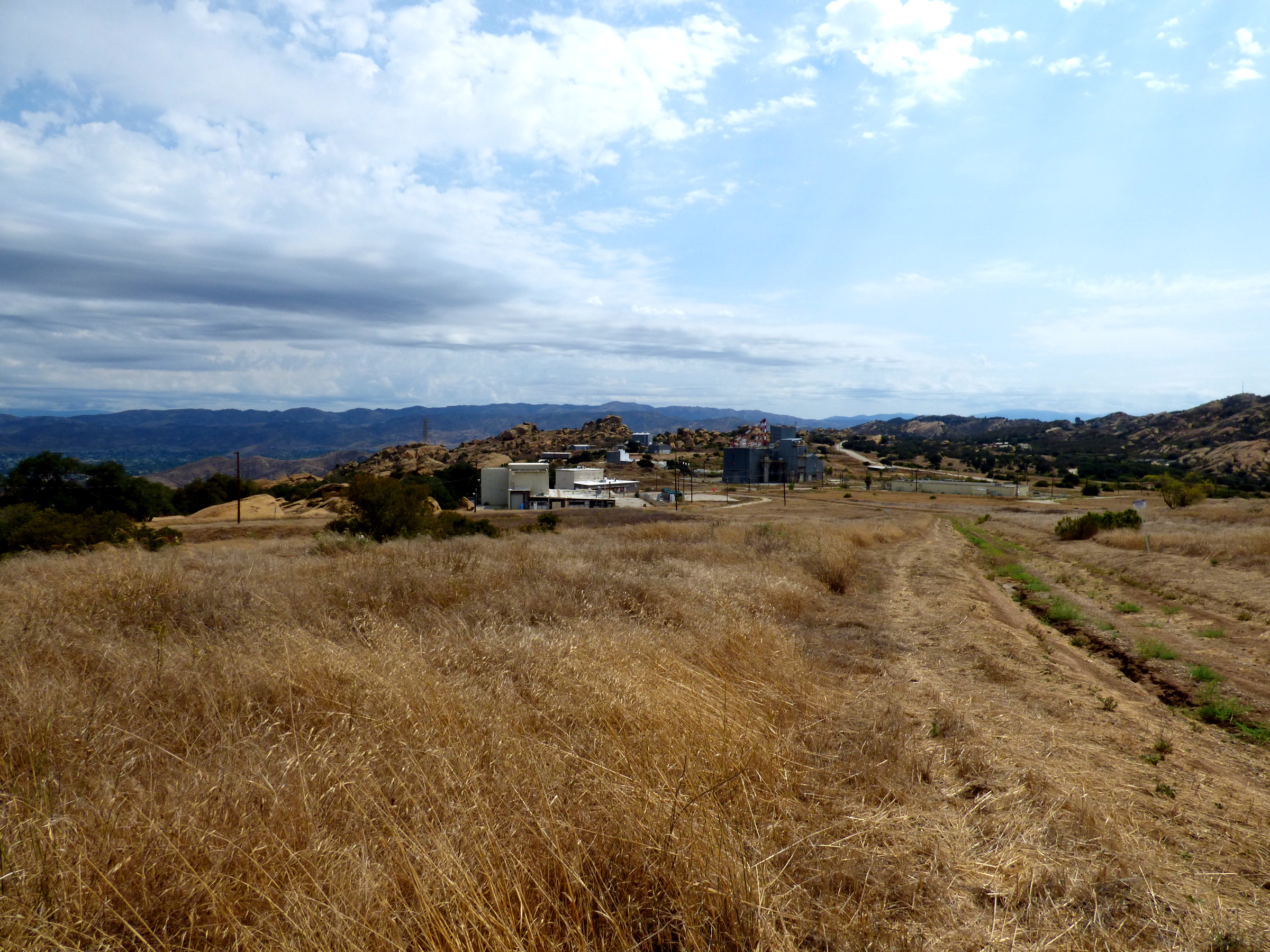 This empty field on the Santa Susana Field Laboratory site was once a small city that housed multiple nuclear facilities and was the scene of several reactor accidents including a major incident in 1959. Almost all traces of the facilities have been removed as part of environmental mitigation, but this area is within a half mile of the flash point of the Woolsey Fire, causing concern among residents and activists who feared that radioactive contamination contained in the soil and vegetation may have been released by the fire. Officials at the California Department of Toxic Substances have stated unequivocally that the fire did not contribute to radiation exposure. Even so, the MRCA opted to perform soil tests at its parks before reopening them, as a precaution. The tests were negative for radioactivity in excess of background levels. 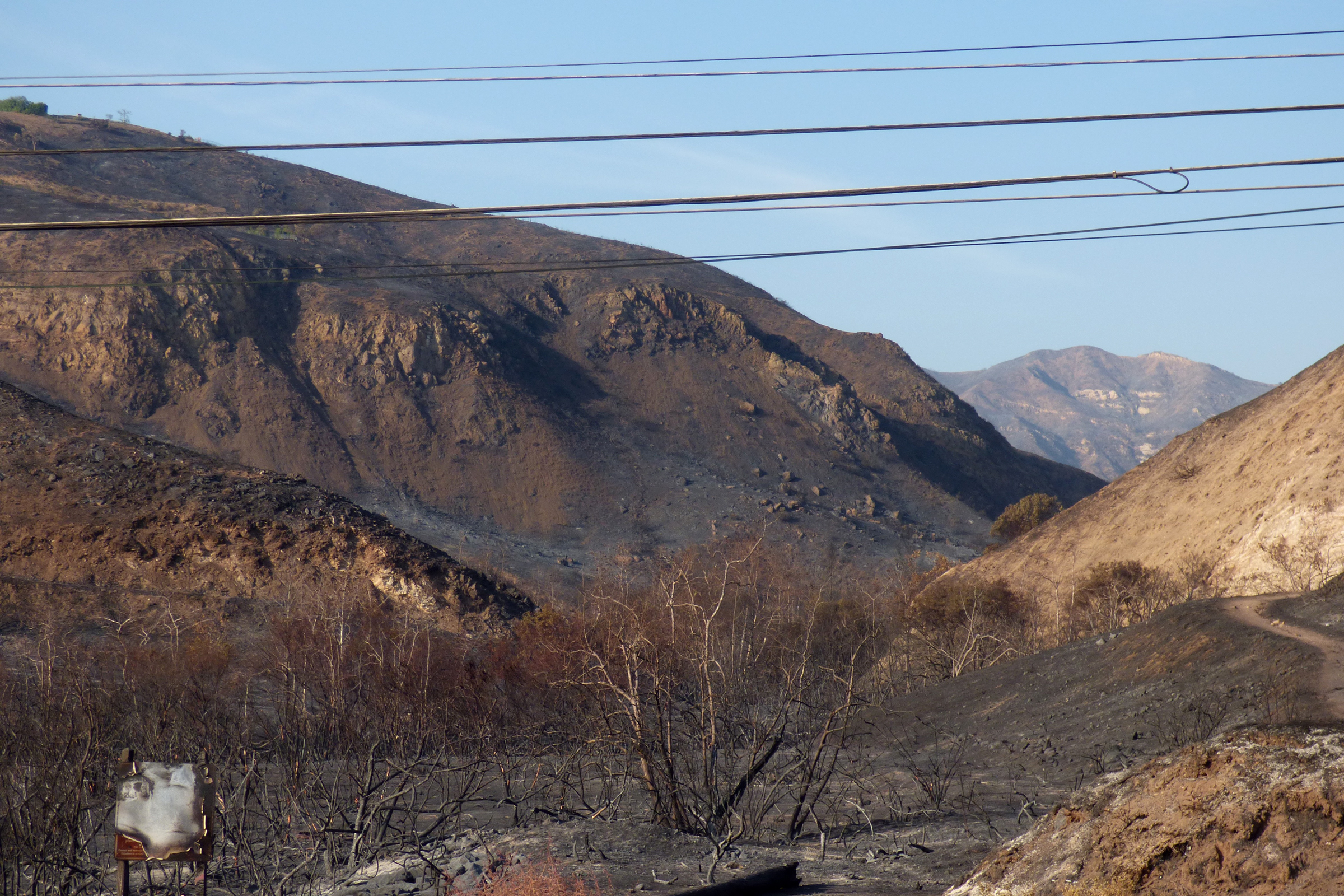 Corral Canyon, just days after the Woolsey Fire, looking as desolate as a war zone.

As parks impacted by the Woolsey fire are incrementally restored and opened, they are also inspected for toxic residue in the ashes and tested for radiation contamination at the old Santa Susana Field Laboratory test site at Woolsey Canyon where the fire started.

The Mountains Recreation and Conservation Authority (MRCA) has reopened nine parks that were closed following the Woolsey Fire, stating in a press release, “The MRCA has cleared hazardous conditions from the parks and open space.”

“In order to assure public safety, the MRCA conducted limited radiological analysis of soils in Upper Las Virgenes Canyon Open Space Preserve and other MRCA areas which determined that the fire had not increased the low-level concentrations of radionuclides that are generally consistent with normal background levels,” the press release states.

MRCA spokesperson Dash Stolarz told the Messenger Mountain News that the testing was in response to concerns raised by the public over the location where the fire started, near Woolsey Canyon at the old Santa Susana Field Laboratory (SSFL).

THE TOXIC HISTORY OF SSFL

The field lab, which sprawls across nearly 3,000 acres, was in operation from 1948-2006. At one time as many as 10 nuclear reactors were developed and operated there by the U.S. Department of Energy (DOE), which also maintained a lab used for liquid metals research.

Rockets for every space launch, from the Mercury missions in the 1950s to the Space Shuttle program in the 1980s, were tested at the once remote location when it was owned and operated by Rocketdyne. Winning the space race came at a cost to the environment. An estimated 30,000 rocket tests resulted in soil and groundwater contamination from the chemicals used to flush the rockets after test firing.

Disposal techniques in the 1950s and ’60s involved blowing up materials or burning them in open pits.

According to the Santa Susana Field Laboratory Advisory Panel, over its lifetime, Area IV of SSFL was home to: “ten reactors, numerous ‘critical’ facilities (a kind of low-power reactor), a plutonium fuel fabrication facility, a uranium carbide fuel fabrication facility, a ‘hot lab’ (purportedly the largest in the country) for remotely cutting up irradiated nuclear fuel shipped in from around the country from other nuclear facilities, and a sodium burn pit, in which sodium-coated objects were burned in open-air pits.”

Although the site has undergone extensive mitigation at the former location of the nuclear facilities, area residents and local activists raised concerns that the fire could have released contamination from the soil or from burning plant material.

The California Department of Toxic Substances Control (DTSC) issued a press release in the early hours of the morning on November 9, just as the Woolsey Fire was reaching the 101 Freeway, announcing that fire personnel had determined that the fire did not present any risks other than those normally present in a wildfire situation.

“Our scientists and toxicologists have reviewed information about the fire’s location and do not believe the fire has caused any releases of hazardous materials that would pose a risk to people exposed to the smoke.”

Not everyone was convinced. “The Woolsey Fire likely released and spread radiological and chemical contamination that was in SSFL’s soil and vegetation via smoke and ash,” countered Bob Dodge, president of the activist organization Physicians for Social Responsibility-Los Angeles. Dodge pointed to a photo taken from a news helicopter, showing the fire burning on field lab property approximately a half mile from the former site of the nuclear facilities.

An interim summary report on the Woolsey Fire filed by the DTSC in December, rebutted the claim, finding “multiple lines of evidence that no radiation or hazardous materials from SSFL were detected in communities following the Woolsey fire.”

The testing performed by the MRCA confirms the DTSC findings. The soil samples, collected in the field at the various MRCA properties and sent to a laboratory for testing, revealed no evidence of radioactivity beyond the levels that are always present in the environment.

Background radiation includes the cosmic radiation that bombards earth from space, and also terrestrial radiation from naturally occurring elements on Earth like radon and radium.

In the Santa Monica Mountains, geologic process has created a naturally occurring source of low levels of radiation. The Monterey or Modelo Formation has produced large amounts of petroleum in other parts of California, but it is also contains naturally occurring contaminants. This rock formation is made up of shales formed on the seafloor during the Miocene era approximately 20 million years ago, and it contains high levels of potentially toxic elements like selenium, phosphorus, sulfate, arsenic, and cadmium, but also small amounts of radioactive uranium. In the local mountains it contributes to the poor water quality in the Malibu Creek watershed.

Rocks aren’t the only source of radioactivity. All organic material contains a small amount of radiation, from the decay of isotopes like carbon-14, which occurs in human bones, to potassium-40, and radium-226, present in food and water. A tiny but measurable amount of potassium-40 occurs naturally in bananas, and in some root vegetables. Surprisingly high concentrations of Radium 226 can be found in Brazil nuts—up to a thousand times higher than in any other type of food.

However, around half of our exposure is estimated to come from man-made sources of radiation, including medical X-rays—which account for as much as 96-percent of human exposure to man-made sources of radiation, according to the National Regulatory Commission (NRC). Every living thing born after 1945 is exposed to the ubiquitous radioactive isotopes that are the result of nuclear testing and environmental pollution.

A 2000 report of the United Nations Scientific Committee on the effects of atomic radiation found that nuclear weapons testing from 1945-1980 “resulted in the unrestrained release into the environment of substantial quantities of radioactive materials, which were widely dispersed in the atmosphere and deposited everywhere on the Earth’s surface.”

Fortunately for park visitors and area residents, the results for all of the samples from all of the MRCA test locations were negative, finding only the expected background levels of radiation.

Stolarz said that the MRCA is aware of the concerns in the community and performed the tests out of an abundance of caution. “We wanted to make sure, so we went ahead and tested,” she said.

Only two major MRCA parks remain closed due to the fire: Escondido Canyon Park and

Charmlee Wilderness Park, both in Malibu.

“Charmlee really, really burned,” Stolarz said. “We had a firefighter, just one guy who lives on site, and he saved the park’s buildings, but the park was really whomped. It’s still not safe.”

Escondido Canyon, home to a popular waterfall, was also hard-hit by the fire. Stolarz explained that until the MRCA can make sure that all hazards are addressed, the public is asked to respect the closures and stay away.

“We don’t have an official timeline,” Stolarz said. “We won’t reopen them until it is safe.”

To learn more about the MRCA’s open space, visit: https://mrca.ca.gov.

Wild At Hart: The Anniversary Performance