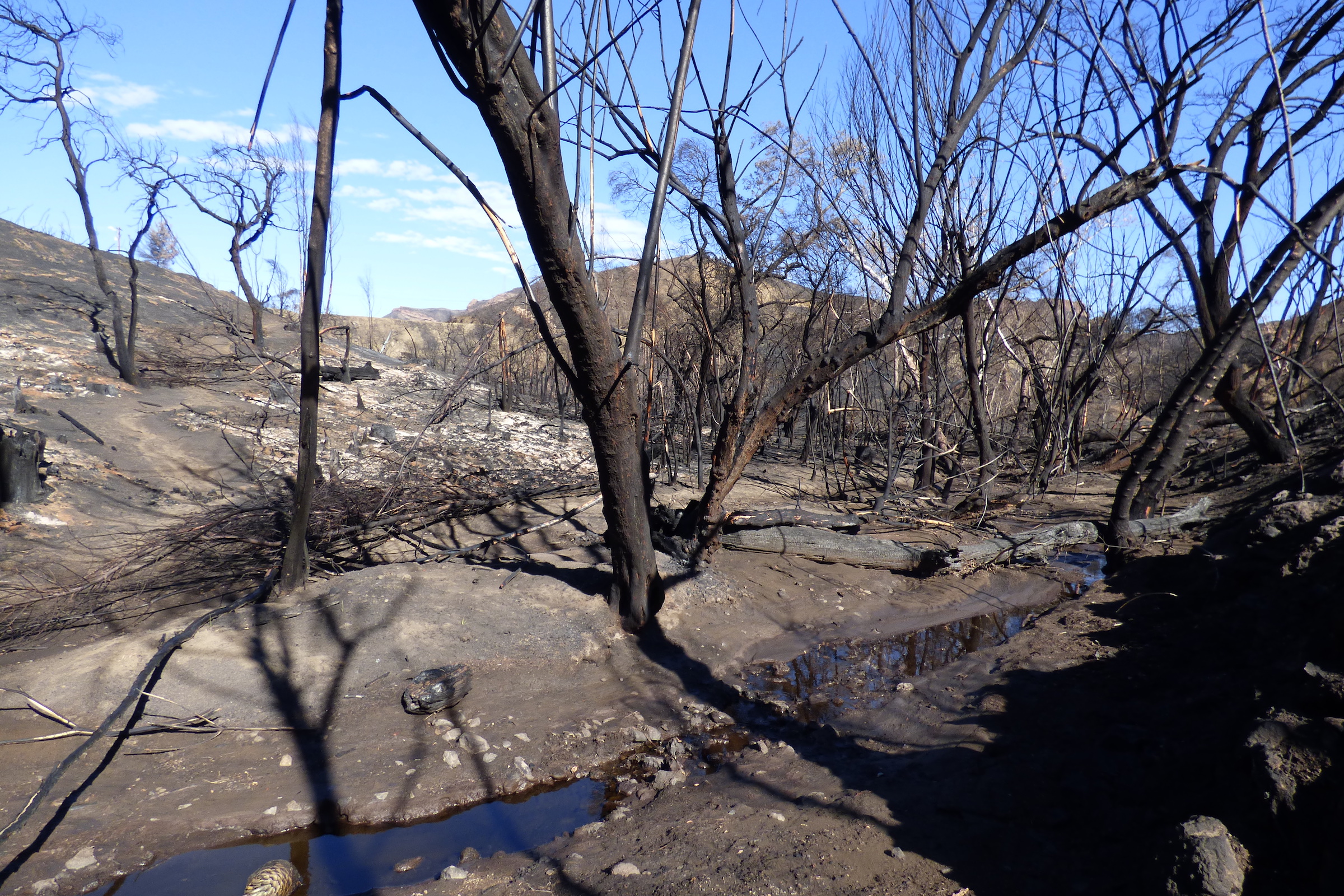 Trancas Creek in 2018, less than a month after it was scorched by the Woolsey Fire. 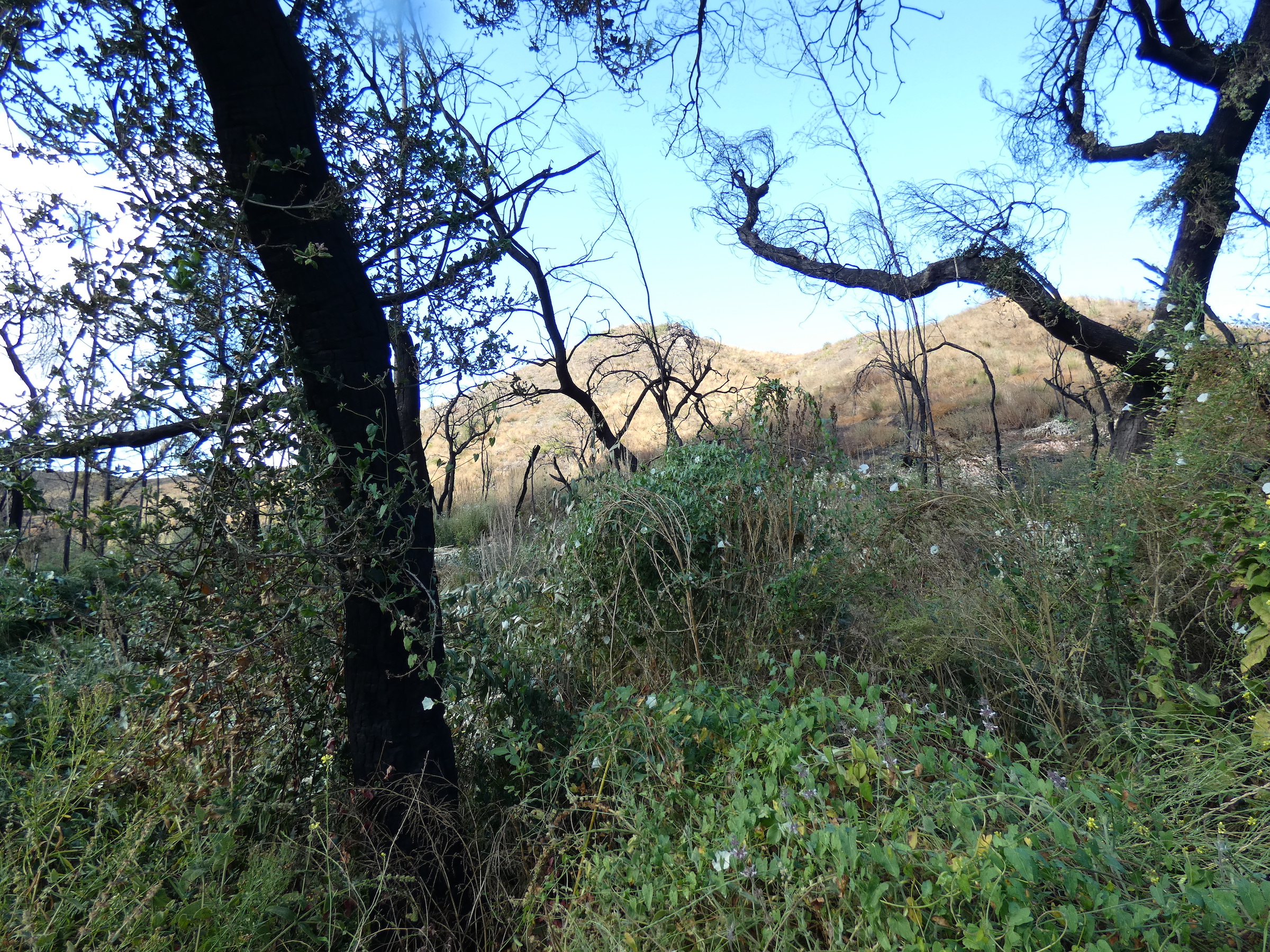 Trancas Creek one year later, well on the way to regeneration. 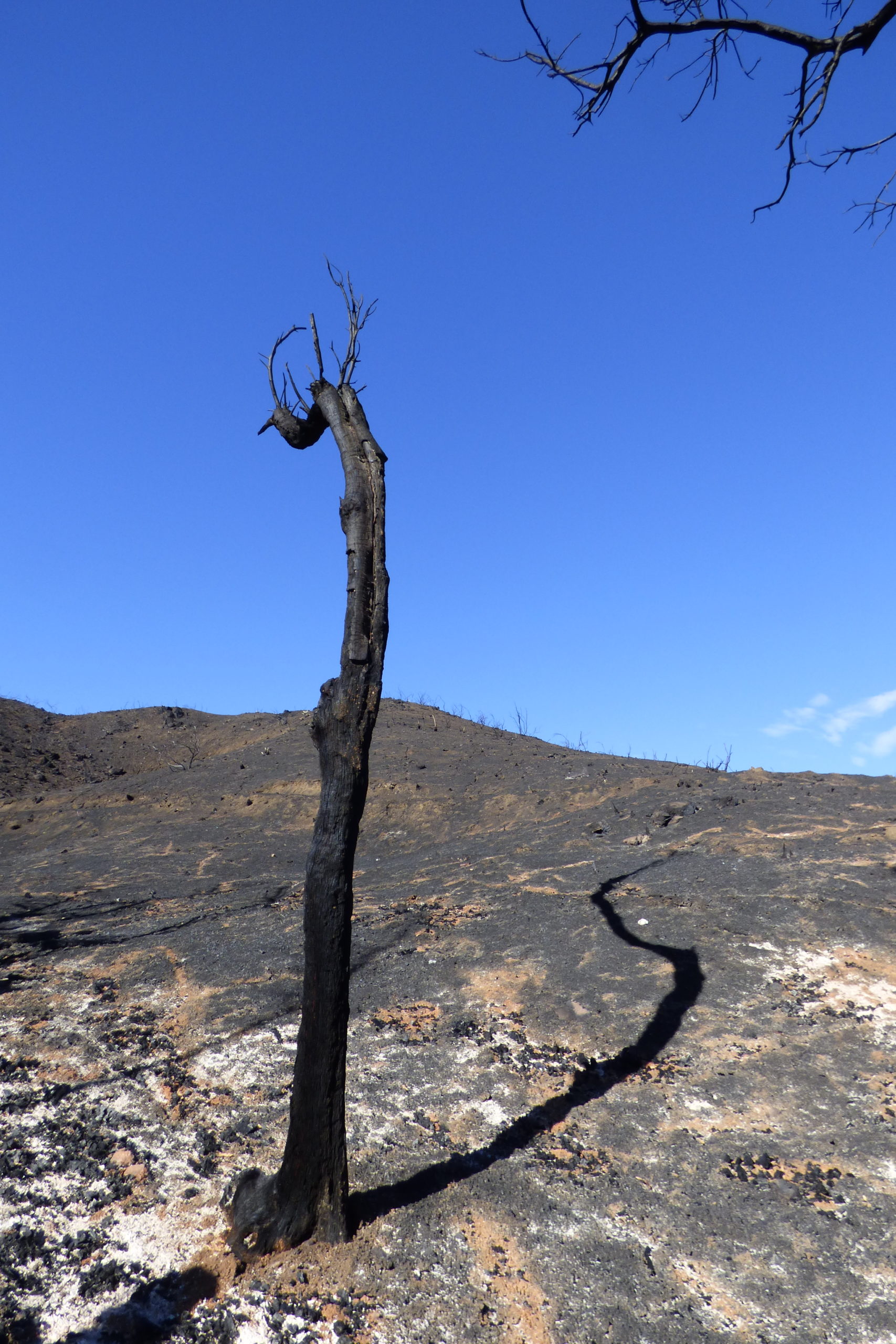 This burned skeleton of an oak tree standing sentry in a desolation of ash was one of the starkest images the Messenger Mountain News captured in the aftermath of the fire. It was hard to imagine anything surviving the devastation. 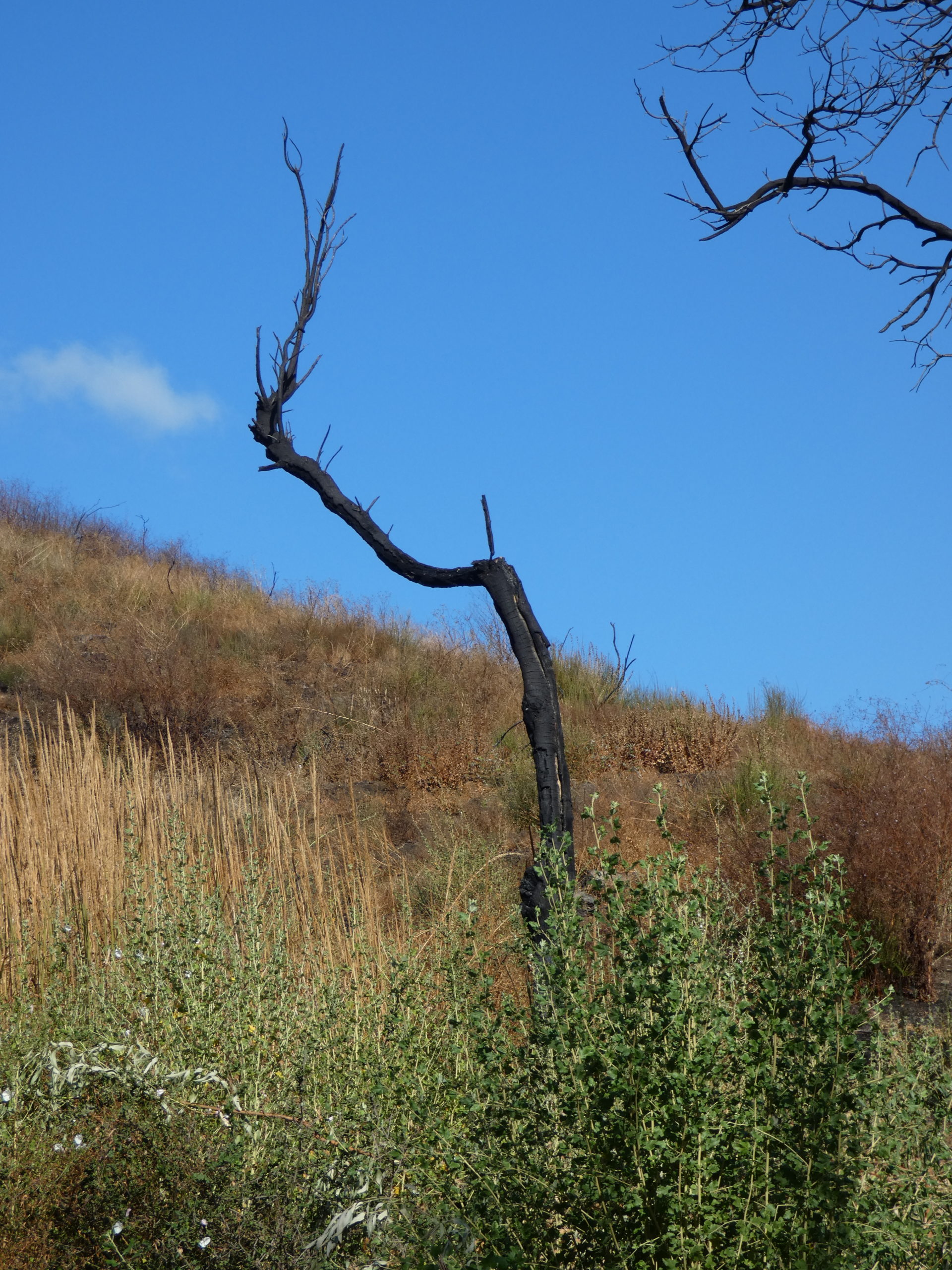 On a return visit a year later, this oak was surrounded by native giant rye, and had produced nearly six feet of new growth from roots that were undamaged by the fire. 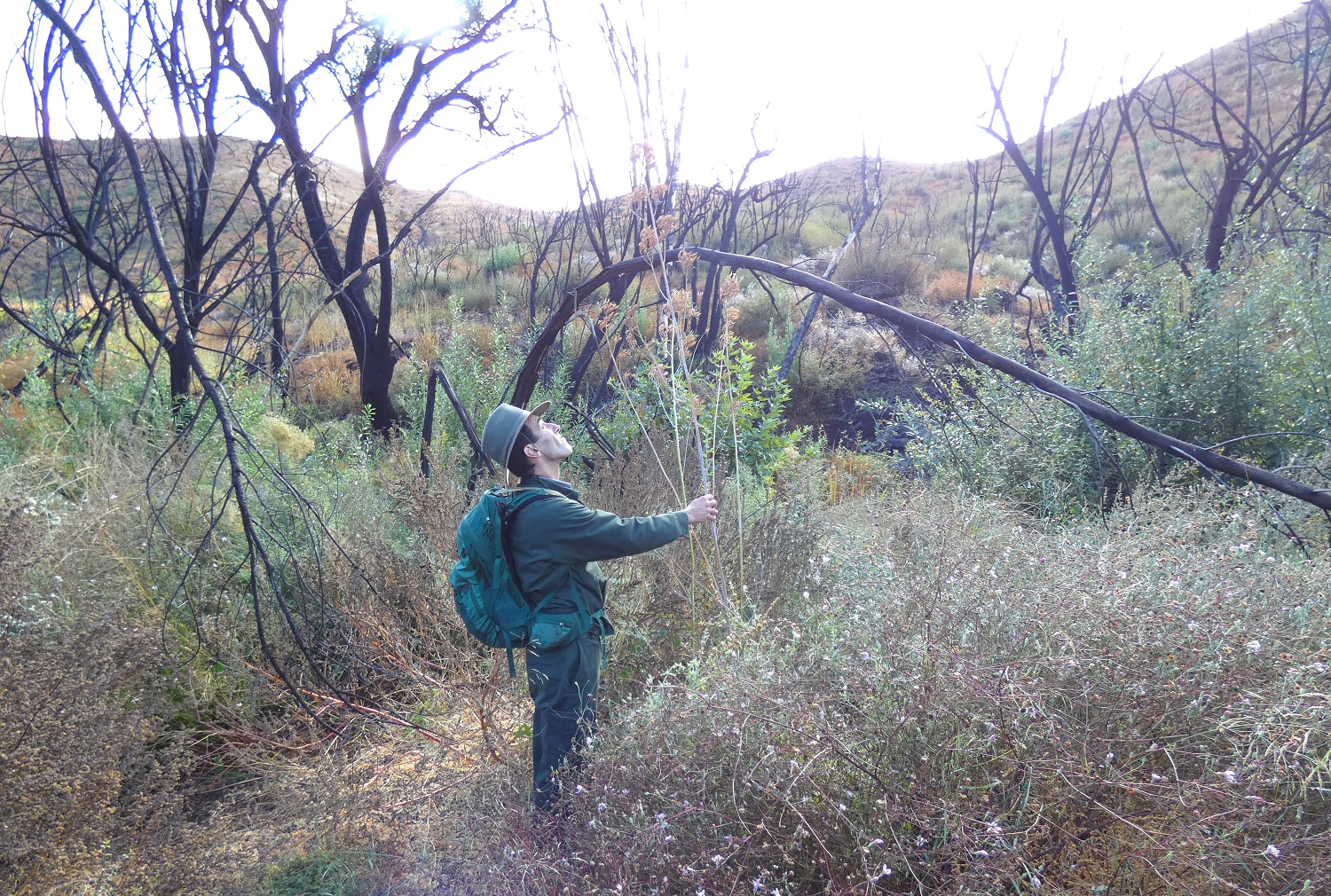 In the same area in 2019, Mendelsohn pauses to examine a nearly eight-foot-tall specimen of Ehrendorferia ochroleuca—white bleeding hearts—growing in a profusion of new plant life. 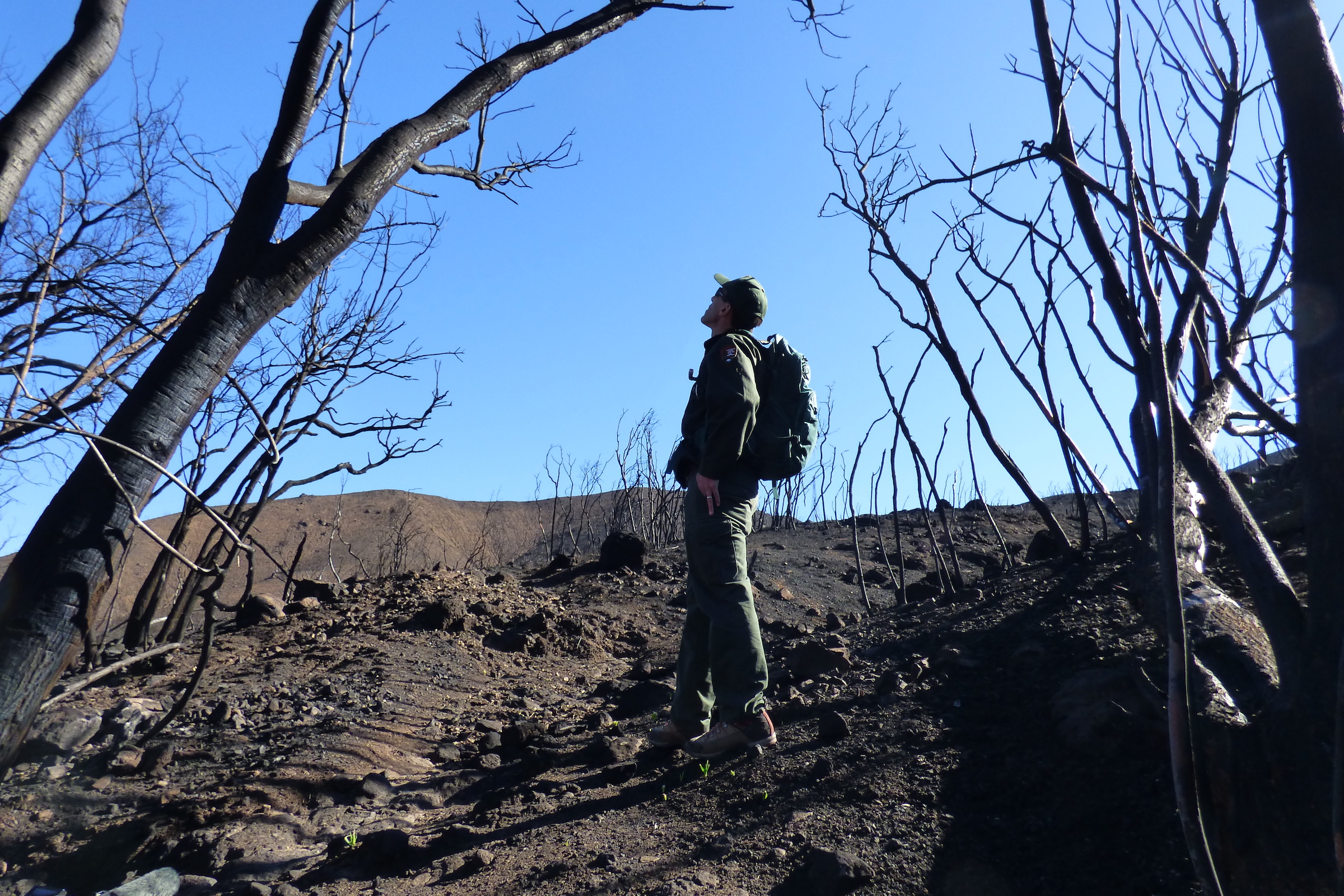 National Park Service wildlife and plant ecologist Mark Mendelsohn was the guide on both visits. In this image from 2018 ,Mendelsohn stands on a barren hillside.

We visited upper Trancas Canyon just one week after the Woolsey Fire was officially contained. A year later, this National Park Service property is already in the process of transforming from wasteland back into wilderness. Photos by Suzanne Guldimann

On December 5, 2018, just one week after the Woolsey Fire was fully contained, the Messenger Mountain News accompanied National Park Service (NPS) vegetation and wildlife ecologist Mark Mendelsohn into upper Trancas Canyon to report on fire ecology and plant recovery. The road to the site, lined by burned power poles and downed power lines, was still closed. Mendelsohn met us at the roadblock and escorted us to the site.

It was a journey through a landscape straight out of poet T.S. Eliot’s Waste Land, a bleak and barren expanse of ash and charcoal. The whole idea of plant recovery seemed wildly optimistic, but throughout that desolate canyon, life was beginning to stir.

The field trip was ostensibly to show reporters how two plant species—the native chaparral yucca or Lord’s candle, Hesperoyucca whipplei,  and the invasive Arundo donax, also known as giant cane, were already beginning to regrow. A few minutes of searching turned up half a dozen additional native species.

It was too soon to look for the oaks and shrubs like laurel sumac to re-sprout, but Mendelsohn identified the bright green shoots of the soap plant (Chlorogalum pomeridianum)—a member of the lily family that, like the yucca, grows from a tough, fiber-covered bulb-like root. Lance-leaf live-forever (Dudleya lanceolata), a succulent that was living up to its common name was also beginning to resprout, and we saw the brilliant green shoots of giant wild rye (Elymus condensatus), and the tiniest imaginable sprouts of a second kind of native grass tentatively identified as Stipa lepida, foothill needlegrass.

“I’m excited to see what comes up,” Mendelsohn said.

The regeneration in the months that followed exceeded even the most optimistic ecologist’s expectations. The Messenger revisited the area periodically throughout the Woolsey Fire aftermath, chronicling the amazing transformation. We returned to the site with Mendelsohn once again as a guide almost exactly one year after our first visit.

The Wasteland, transformed by fire and rain into an ephemeral Eden, had flowered and set seed. There was evidence everywhere of the abundant post-fire blossoming: seed pods from mariposa lilies, shooting stars and golden stars, phacelia, globe lilies. Brilliant red California fuchsia, yellow canyon sunflowers and one last cluster of white bleeding heart flowers (Ehrendorferia ochroleuca) were still in bloom, the latter scented faintly like vanilla.

“Ehrendorferia ochroleuca is a fire follower that only blooms after a wildfire,” Mendelsohn said. “It will be back next year, too. Many of the fire followers will be back in the spring, just not in as much abundance.”

Mendelsohn said other plants to look for in the second and third years following the fire include perennials that take a year or two to grow before blooming, like bush poppy and woolly blue curls, an aromatic member of the sage family that will have vibrant blue-violet flowers next season.

National Park Service crews had been at work in the canyon, battling not only the unstoppable arundo, but also eucalyptus trees, which were making an unwelcome comeback.

Many of the native trees that appeared entirely blackened and dead on our first visit had resprouted from root or branch like the oak tree that was featured in the original news story in the Messenger. It was no longer stark and dead; new growth had sprouted from the roots and grown to a height of almost six feet over the past year.

Mendelsohn explained that the Santa Monica Mountains has evolved in a fire ecology, and that some species even need heat to germinate their seeds, but to see the recovery first hand is an amazing experience.

2019 was only the first act in the recovery process that is expected to take between five and ten years, but it was a strong opening, thanks to abundant rain.

Researchers remain concerned that increasingly frequent fires in the Santa Monica Mountains may eventually cause irreversible change by preventing native plants from regrowing. This phenomenon, called “type conversion,” can cause key habitat to become degraded into non-native seasonal grassland.

Native animals that depend on specific plant communities for survival become displaced or locally extinct in this scenario, along with the vegetation that supports them.

Mendelsohn described the recovery process at the one-year mark as “a mixed bag,” with some areas overrun with non-natives like black mustard, but there are positive signs, too. “In places like these, where there is a strong presence of native plants, things are looking good,” he said. “The recovery here is what nature intended, what we were hoping for.”

For researchers like Mendelsohn, the fire and its aftermath provide an opportunity to  study the impacts of wildfire on the environment and learn about the recovery process. For the disaster-weary inhabitants of the Woolsey Fire burn scar, the recovery and regrowth in the mountains has offered hope that recovery is not only possible, it is already underway.

To learn more about the NPS and the impact of the Woolsey Fire, visit www.nps.gov/samo.

Have Yourself a Boomer’s Little Christmas