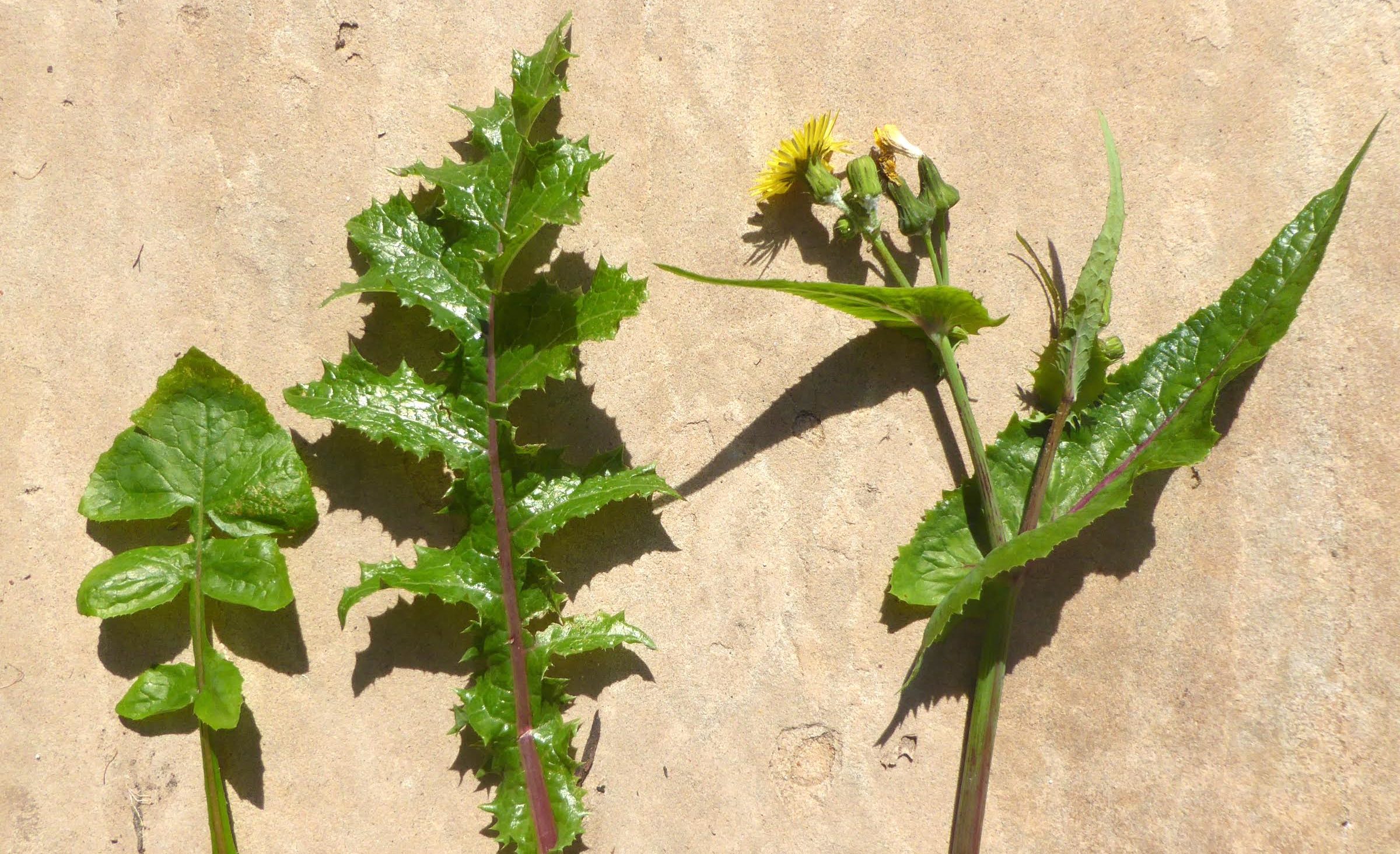 Common and rough sow thistle for comparison. Both are edible. the common one is less intimidating. Photo by Suzanne Guldimann 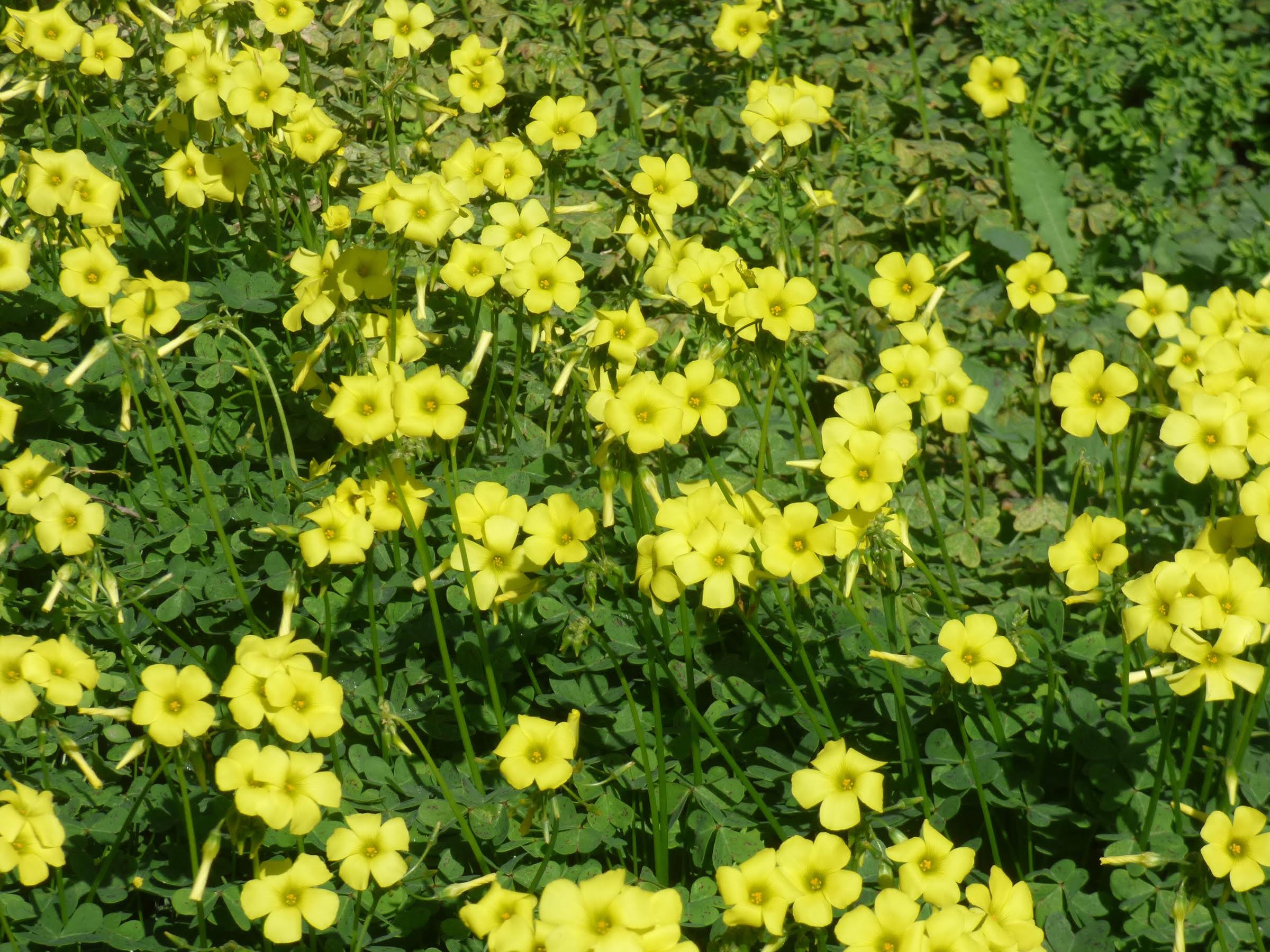 Oxalis growing like crazy by the side of Topanga Canyon Blvd. Photo by Suzanne Guldimann 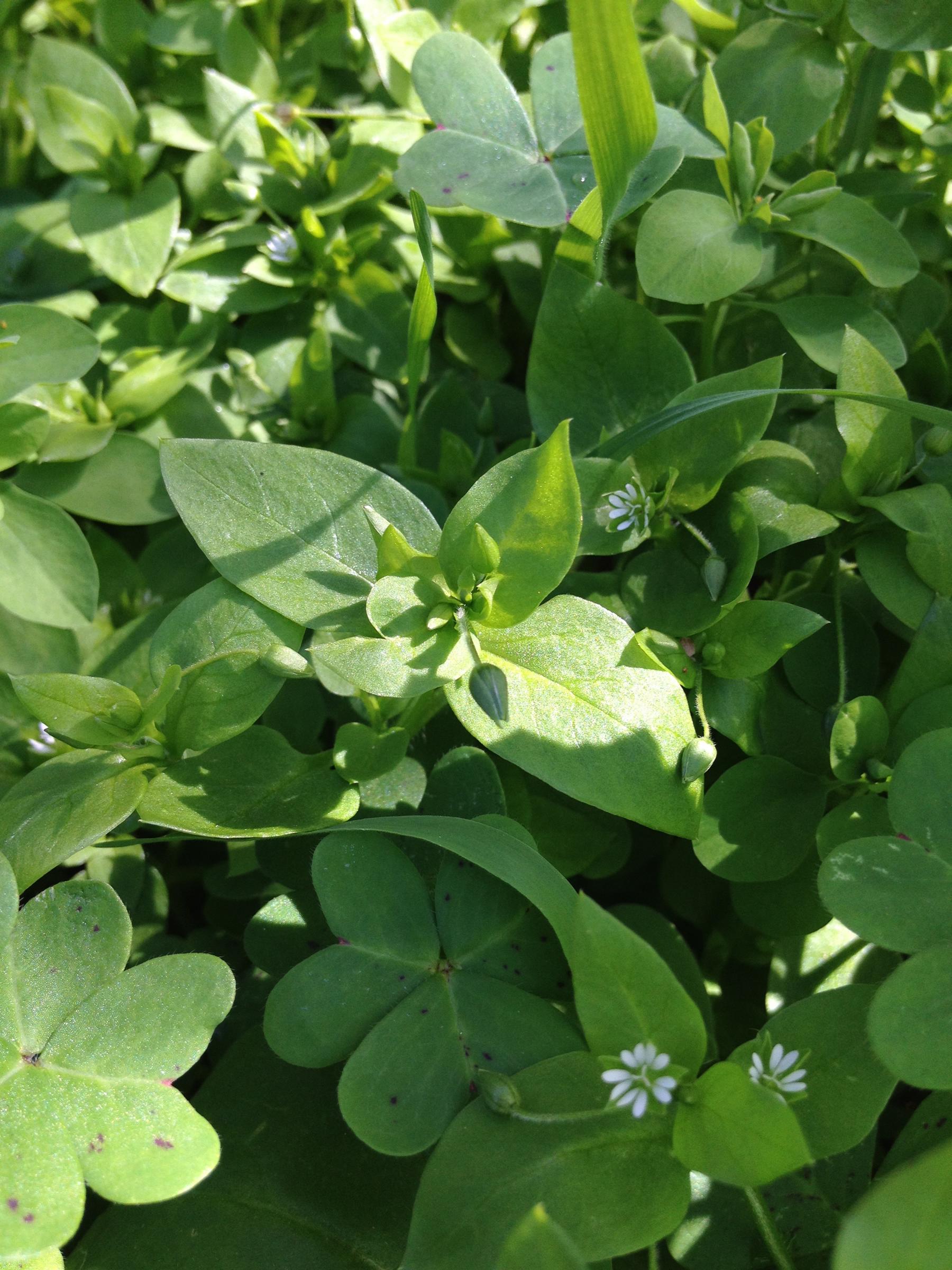 Chickweed, growing in among the oxalis. Photo by Suzanne Guldimann 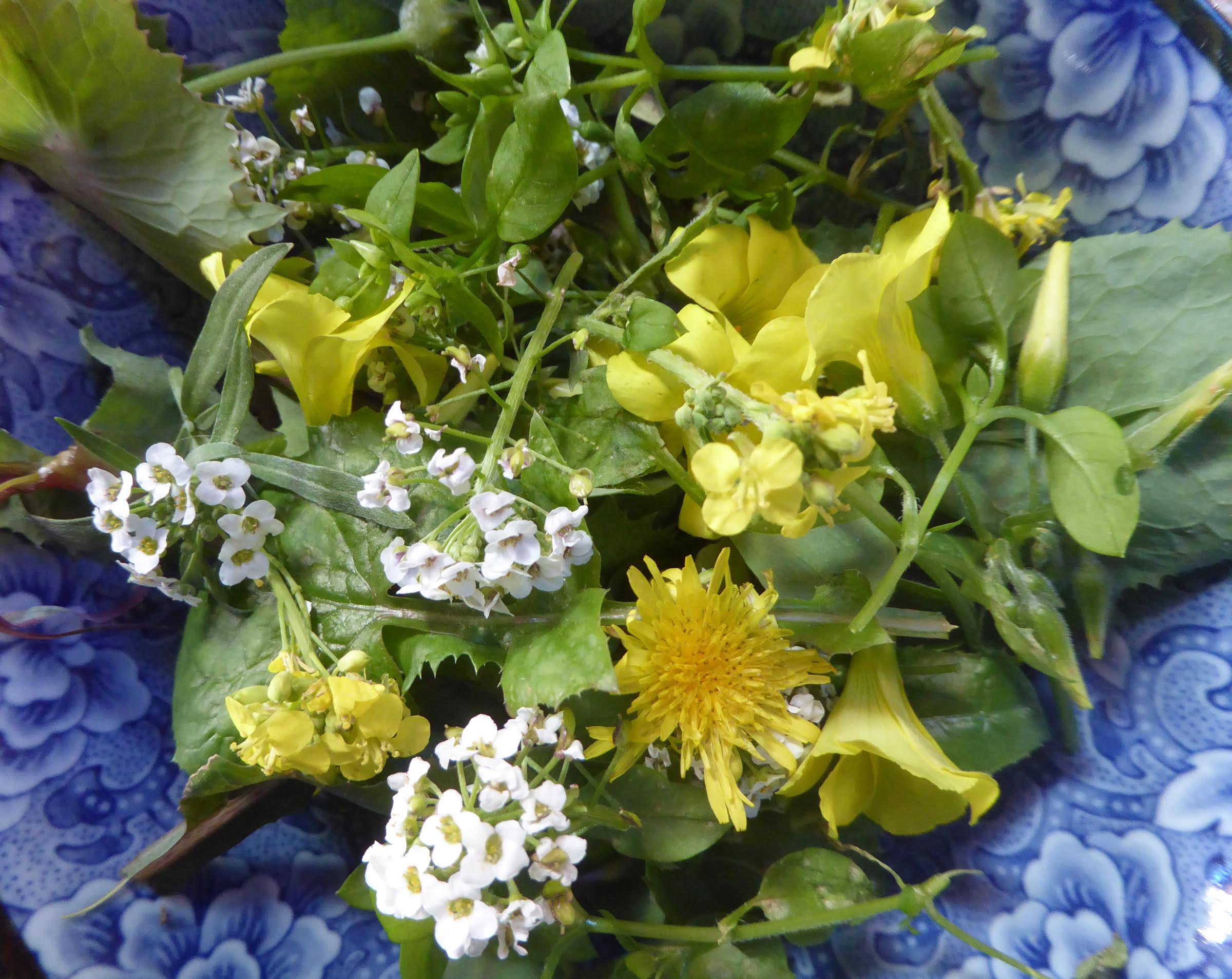 A salad of many of the weeds discussed in the article (we boldly and bravely tried it and it was rather bitter, but edible. Photo by Suzanne Guldimann 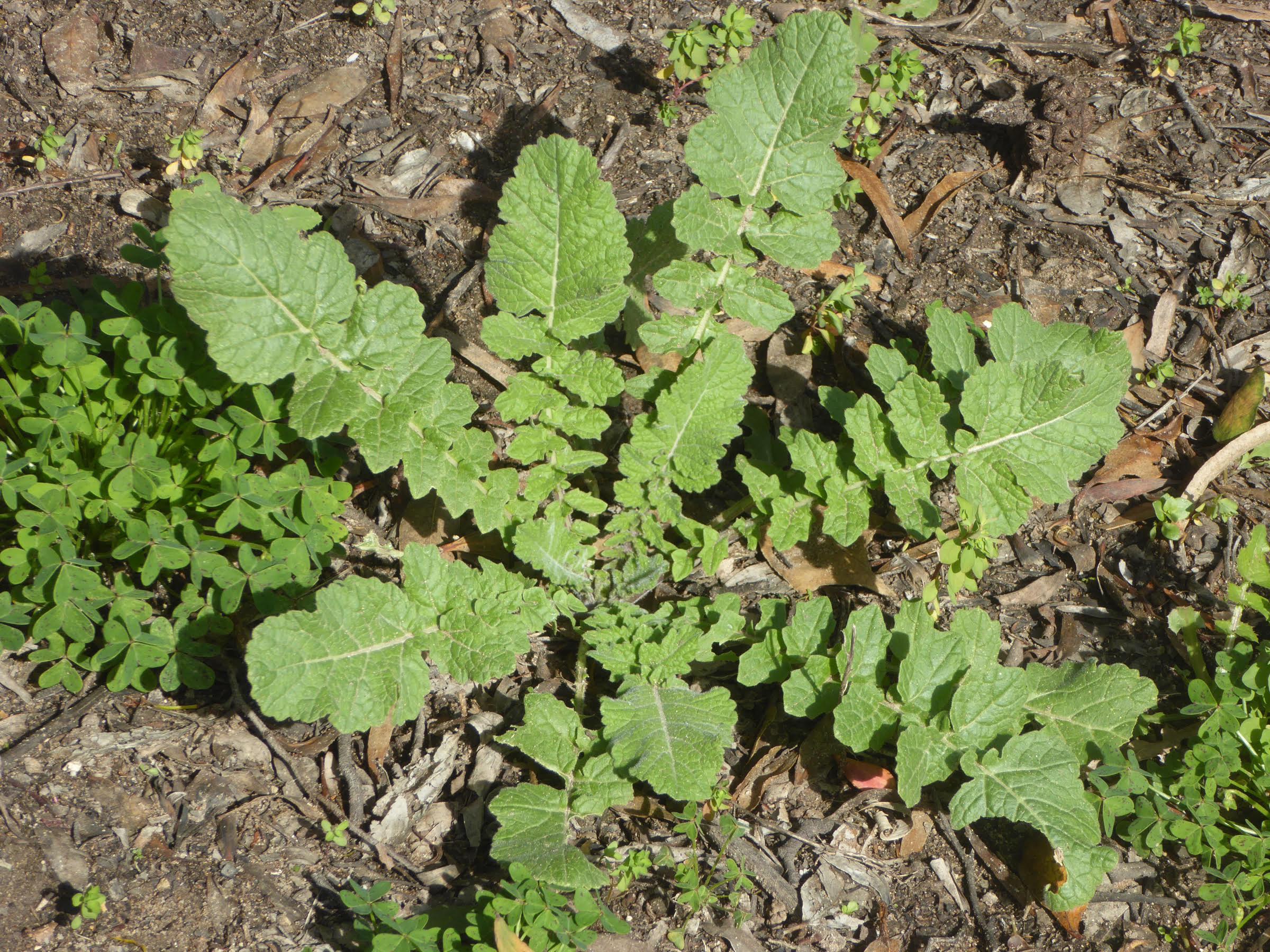 All over the Santa Monica Mountains a green tide is rising as dormant seeds, awakened by the rains after years of drought, are burgeoning forth into a sea of greenery.

The profusion that transforms the mountains into an ephemeral green paradise may cause consternation for gardeners because, along with the native wildflowers comes an invasion of non-native weeds.

Take a closer look, however, and you’ll find that even some of the most invasive pests are edible or medicinal and almost all have a storied past.

All along Topanga Canyon Boulevard, and in almost every garden from Malibu to Pacific Palisades, fluorescent yellow oxalis flowers are currently blooming in profusion. This energetic invader (Oxalis pes-caprae), commonly known as goat-foot oxalis, arrived in the Santa Monica Mountains from its native South Africa in the early 20th century.

A 1947 nursery ad in the Malibu Times offers the earliest mention of the plant in the local area: “Do you have a spot in your garden where flowers do not grow? Is there a place under a tree where the roots occupy all the available soil? Is there a narrow space between the walk and the wall where weeds persist and other flowering plants fail? If these are problems, scratch up whatever soil you find in your garden and push in some oxalis bulbs. They will surprise you!”

Surprise is an understatement. Oxalis has not only thrived, it’s conquered, spreading like green fire throughout the mountains. Getting rid of this colorful pest is almost impossible, but the shamrock-like green leaves and yellow flowers are edible, although they should only be eaten in moderation. The plant contains high levels of oxalic acid, which gives the plant its characteristic sour taste and makes it a favorite with children who like to chew the flower stems, but it can cause stomach upset in high concentrations.

Other edible weeds have a longer history in California. Sow thistles are said to have arrived with the first European livestock. Two types of sow thistle are common in the Topanga area. Sonchus oleraceus, the common sow thistle, and Sonchus asper, the prickly sow thistle, crop up everywhere. Both varieties are edible, but just like their close relative the dandelion, they can be extremely bitter.

Outdoor survival expert Christopher Nyerges is the author of  “How to Survive Anywhere,  Foraging California,” and “A Guide to Wild Foods and Useful Plants.” He’s also a popular guest lecturer at the Santa Monica Mountains National Recreation Area (SMMNRA) Visitor Center at King Gillette Ranch and regularly leads workshops on foraging for edible plants in the Santa Monica and San Gabriel mountains. Sow thistle is one of Nyerges’ favorite salad greens, despite its unappealing name. He describes it as “the closest thing to lettuce you’re going to find in the wild.”

According to Nyerges, sow thistle is rich in vitamins C and B. In his books, he gives recipes for adding the raw leaves to salads or cooking the leaves and stems like spinach. Young plants that grow in a shady location are sweeter and less likely to be tough. Blanching or boiling the leaves helps remove the bitterness.

California wild radish, which thrives in sunny fields and is just starting to bloom—pink, white, and yellow—along the road in Lower Topanga Canyon, is another edible weed. This ubiquitous spring plant made headlines in the botanical community in 2006, when a UC Davis study revealed that the plant is a hybrid of two species: cultivated or garden radishes and a weed called Jointed Charlock. According to an article in Science Daily on the research, “the hybrid-derived plants apparently have completely eliminated the ancestral species from California.” The article concludes that “the discovery is significant because the parental species were replaced by a single, stable hybrid lineage in less than 100 years, an extremely short interval in evolution.”

Young radish leaves are best eaten cooked but still may be too peppery for some tastes. The flowers can be used as a garnish for salads and many foragers like to pickle the peppery green seed pods (like capers?).

Brassica nigra, Black Mustard, is a close relative of the radish. This plant is said to have been brought to California by the Spanish missionaries. Legend has it that the padres scattered the seeds along the El Camino Real, the 600-mile route that connected the missions. Plant ecologists suggest that the plant escaped from the mission gardens, where it was grown as a vegetable and the seeds were used to make both the eponymous condiment and as a medicine. Black mustard is still grown commercially for its pungent seeds. In the Topanga area, it can grow to be more than five feet tall and its golden flowers dominate the mountains in the spring.

The young leaves and flowers are edible in moderation, but just like the other wild members of the brassica family, they are best when they are young and tender. Most sources recommend blanching or cooking mustard greens rather than eating them raw.

Not everything that is edible is bitter or peppery. Chickweed, Stellaria media, a common backyard weed with tiny white daisy-like flowers and pointed oval leaves, had a mild flavor. According to Nyerges, it’s rich in calcium. Common mallow, with its round, dark green leaves and tiny purple flowers, also has a mild flavor, and is an abundant spinach substitute throughout the winter and spring.

There are many other edible weeds: goosefoot, purslane, nasturtium, curly dock and sweet alyssum—another member of the brassica family—and even nettles are edible once they are cooked. Knowing that these invasive weeds can be edible, flavorful and even historical, takes some of the sting out having them overrun the garden. But there are also toxic and unpleasant backyard interlopers, including castor bean, carnation spurge and wild tobacco, and it’s important to know which are which.

Just a couple of castor bean seeds contain enough toxin to kill a child. The milky sap of the invasive carnation spurge can cause a poison oak-like skin rash, and tree tobacco, Nicotiana glauca, sometimes mistaken for wild radish or mustard by inexperienced foragers, contains the toxic alkaloid, anabasine.

In 1972, the Los Angeles Times reported that four Van Nuys residents were being treated for alkaloid poisoning after mistaking tree tobacco shoots for wild mustard greens. The article concluded that the victims were lucky. West Valley District health officer Dean Gilman, quoted in the article, recalled an earlier incident that did not have a happy ending. “They were fortunate,” Gilman said. “Last year two El Monte sisters, aged 8 and 10, died after their parents cooked nicotiana as a dinner green.”

The most important part of foraging for field greens is making a positive identification. Nyerges sums it up in one sentence: “If you’re not 100 percent sure, don’t eat it.”

The University of California’s “Weeds of California” website offers extensive information on how to identify common backyard plants: http://ipm.ucanr.edu/PMG/weeds_intro.html.

Christopher Nyerges offers classes on how to find, identify, and prepare wild edibles and his books are available online and through the Topanga Library. More information can be found at https://www.facebook.com/SchoolOfSelfReliance.

“Not My President’s Day”