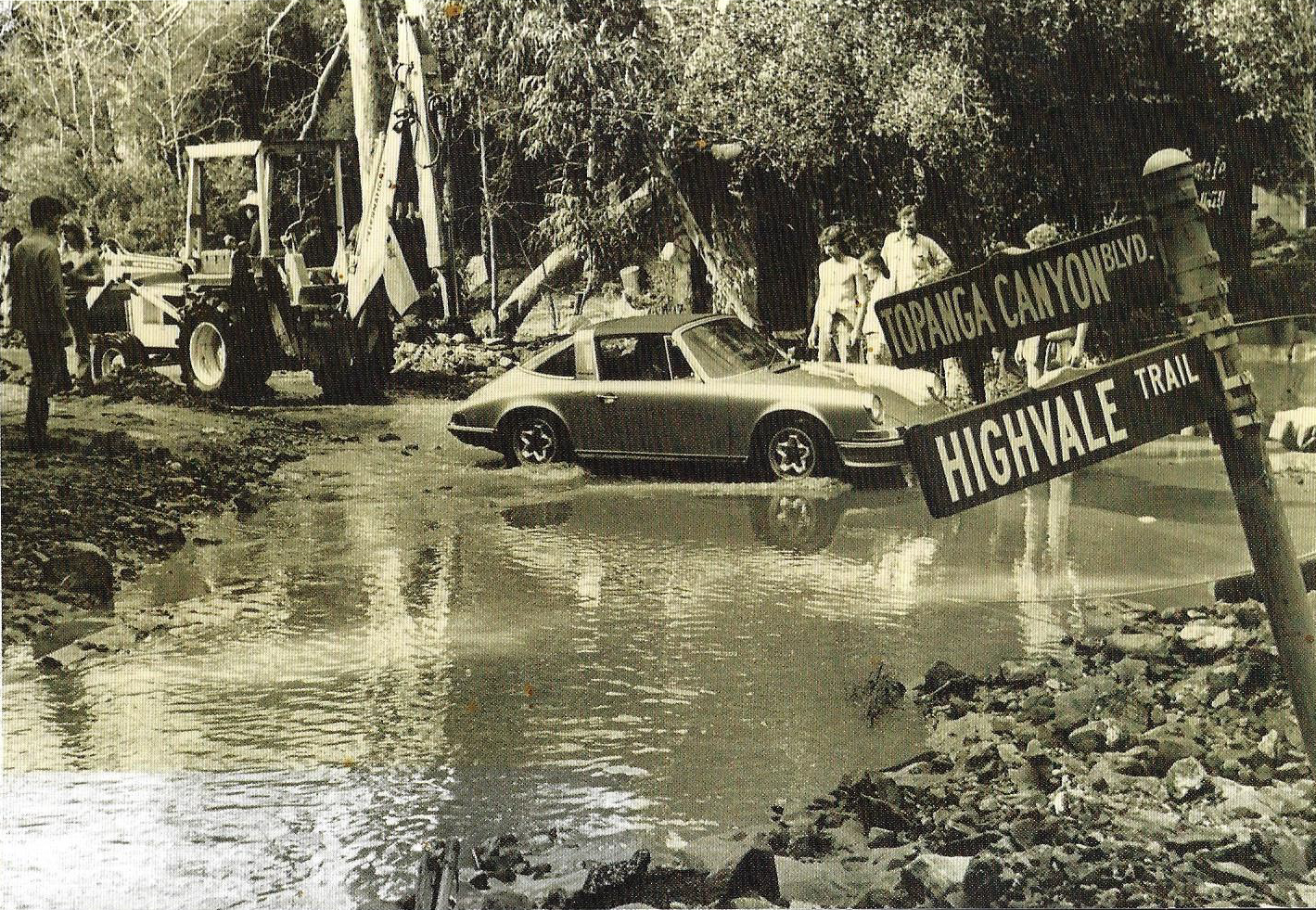 This sports car's owner was actually lucky; many cars were lost to the creek in 1980. Courtesy of Topanga Historical Society: “The Topanga Story” 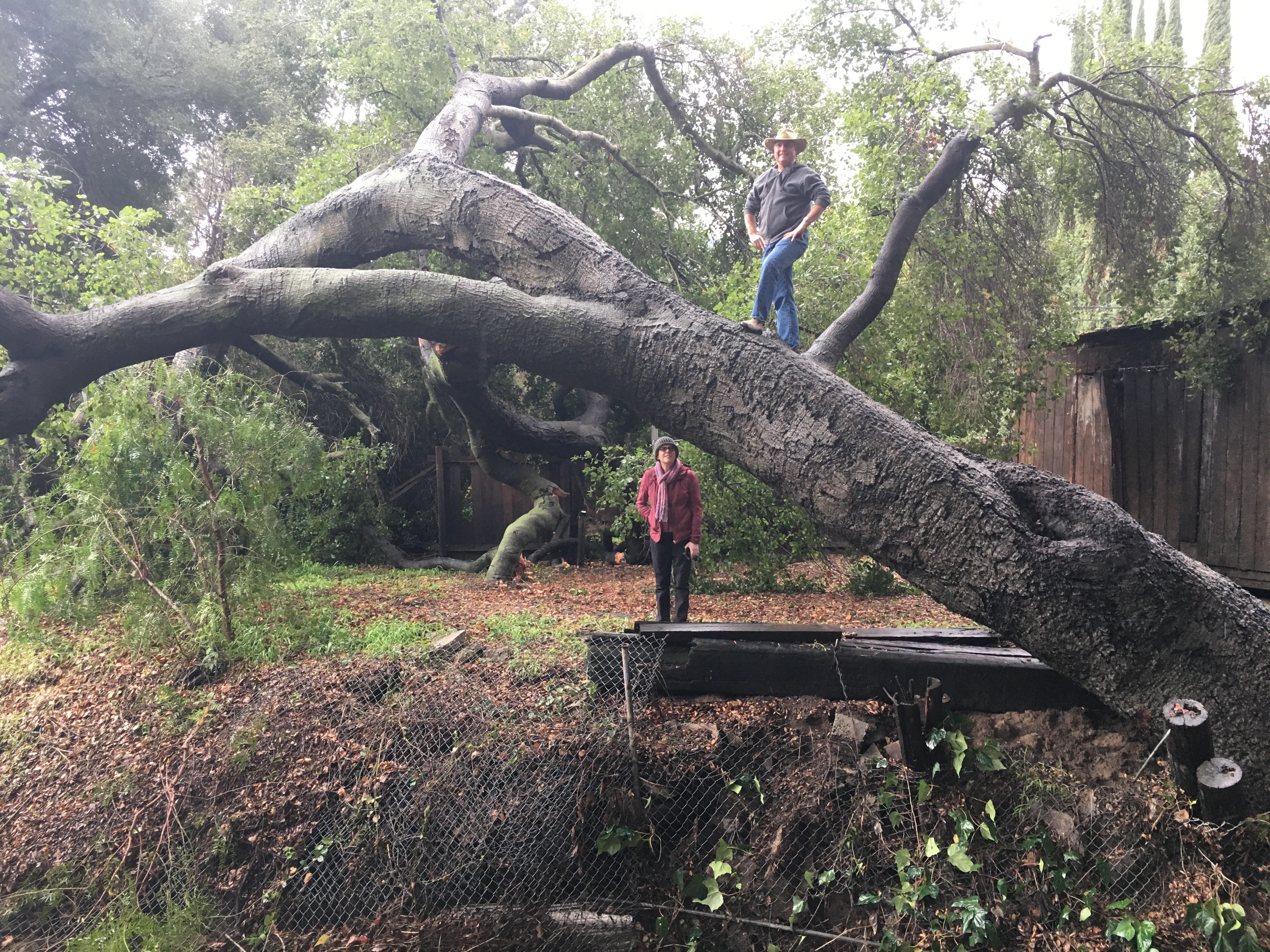 A 350-year- old coast live oak tree, registered in 1965 as “Big Mike,” fell onto Bonnell Drive from the backyard of Evelyn and Russ Jensen. Son, Gary, and his wife, Lucy, give some perspective to the size of the old tree. They cut it back to clear the road but Gary says they don’t plan to remove it from the property any time in the near future. Photo by Allison Zarem 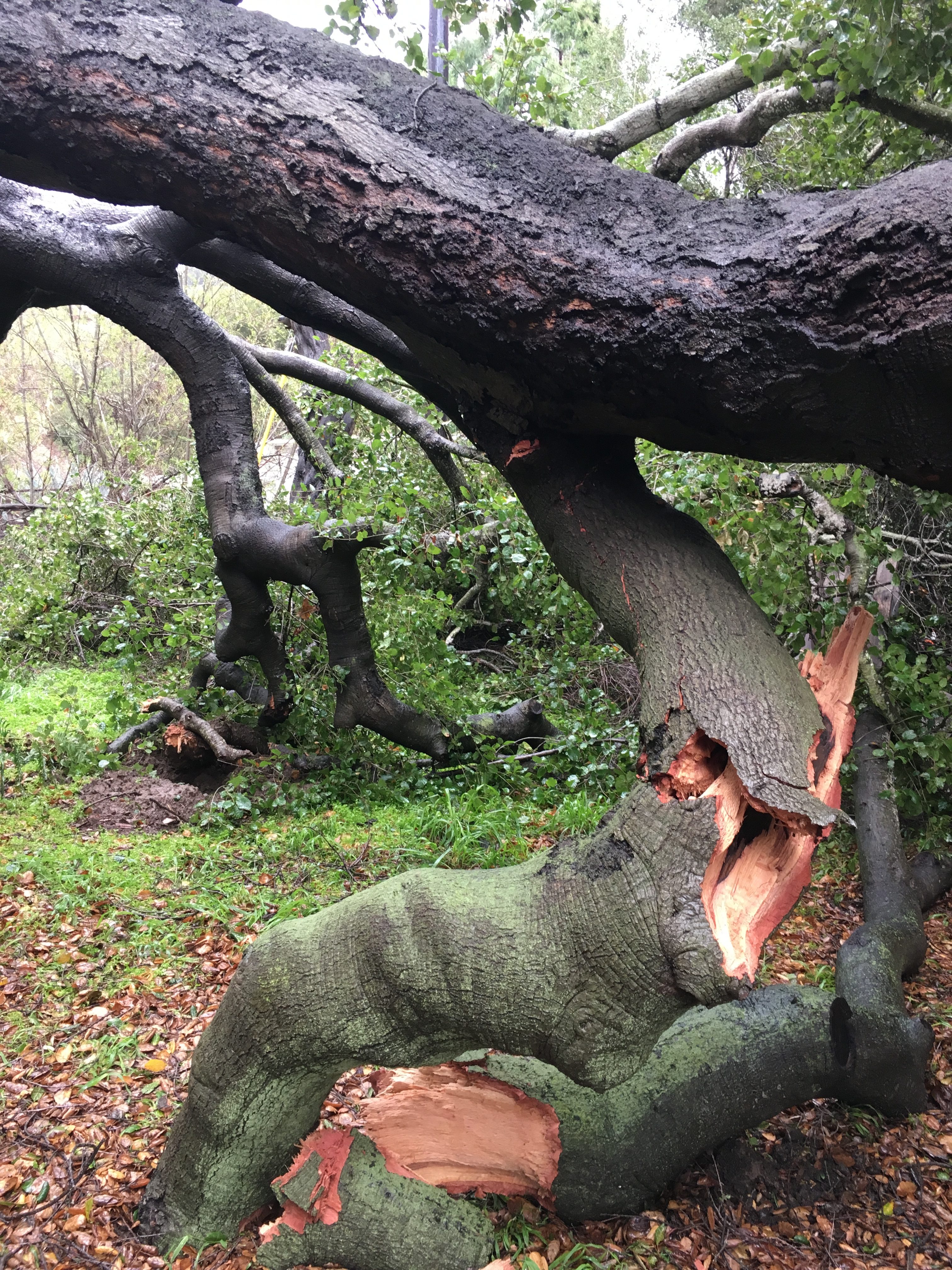 As the Jensen oak tree fell, this branch was shattered from the weight of the tree. Photo by Allison Zarem 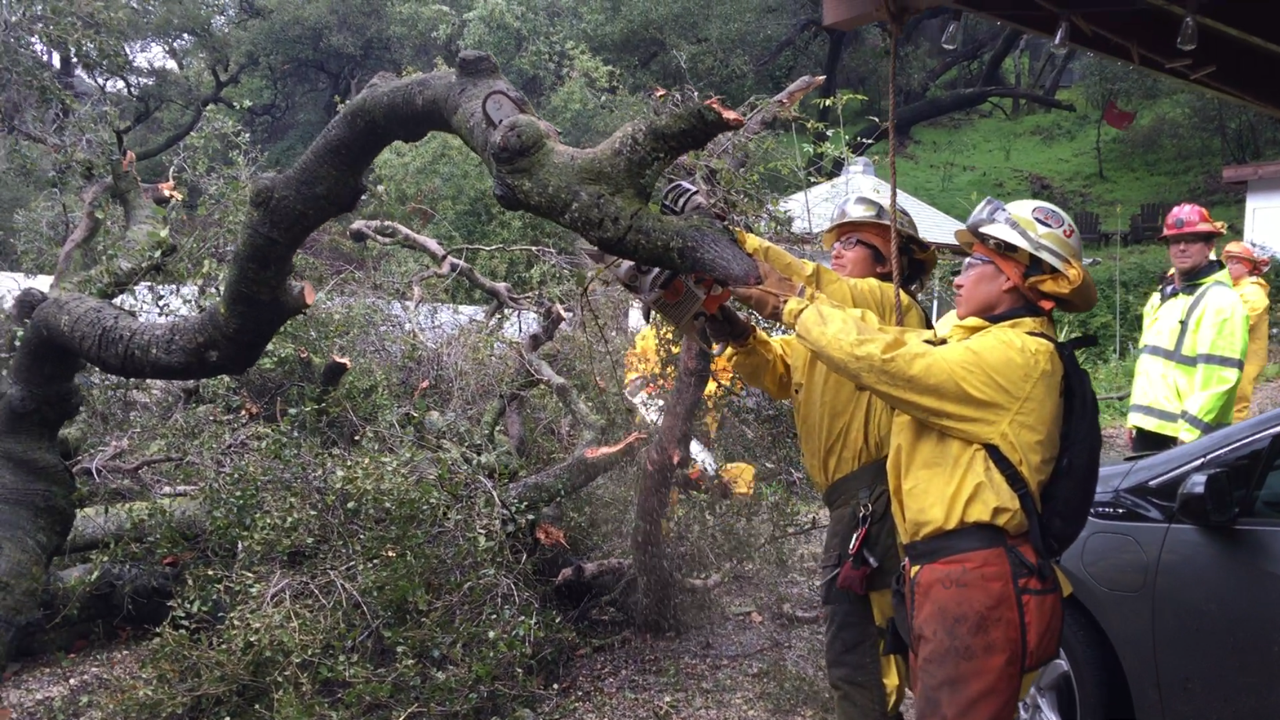 At a residence on Castle Top Trail women firefighters from Camp 13 wielded chain saws and made short work of a 300 year old oak tree that fell during the storm. Photo by Homeowner 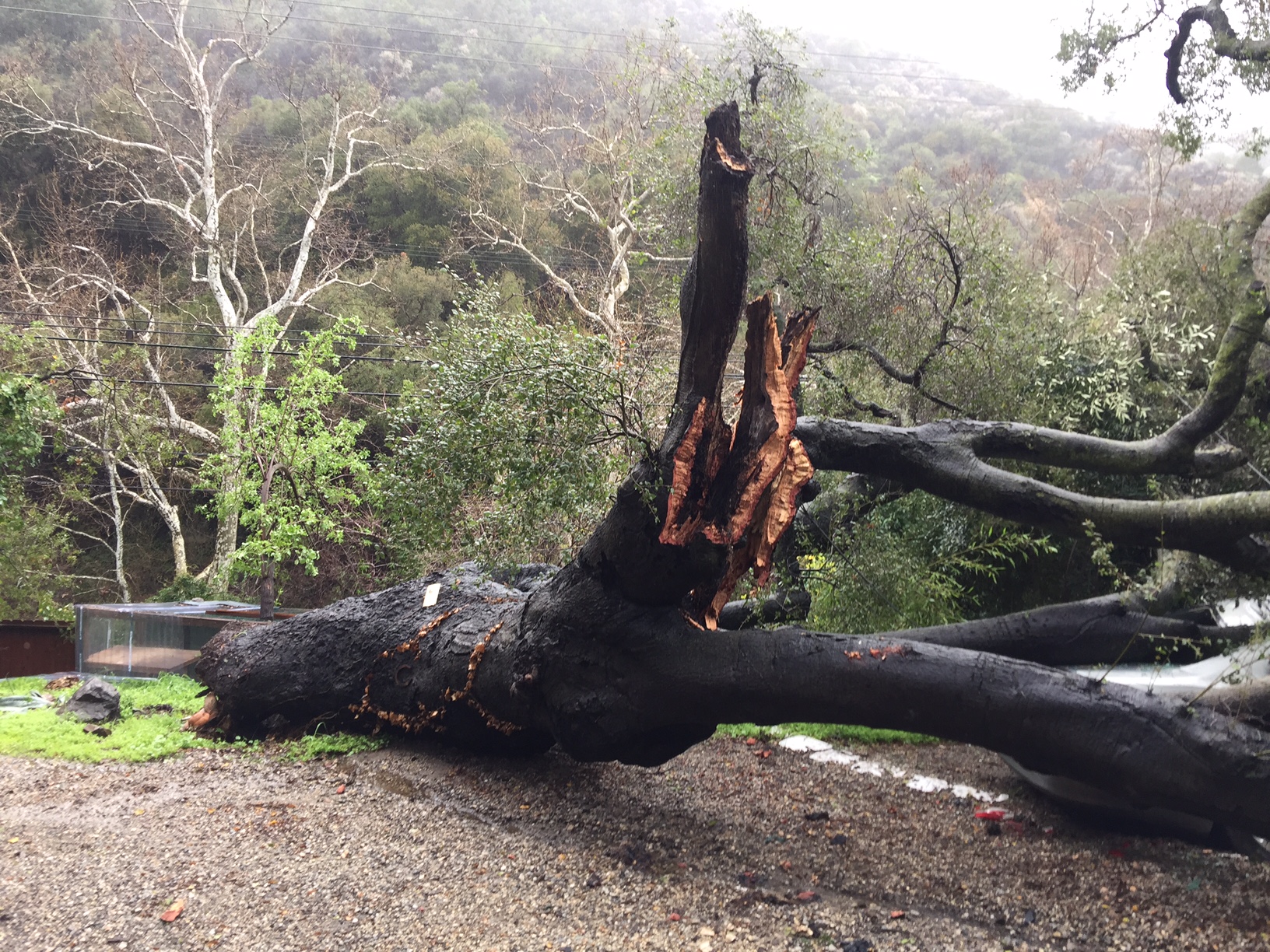 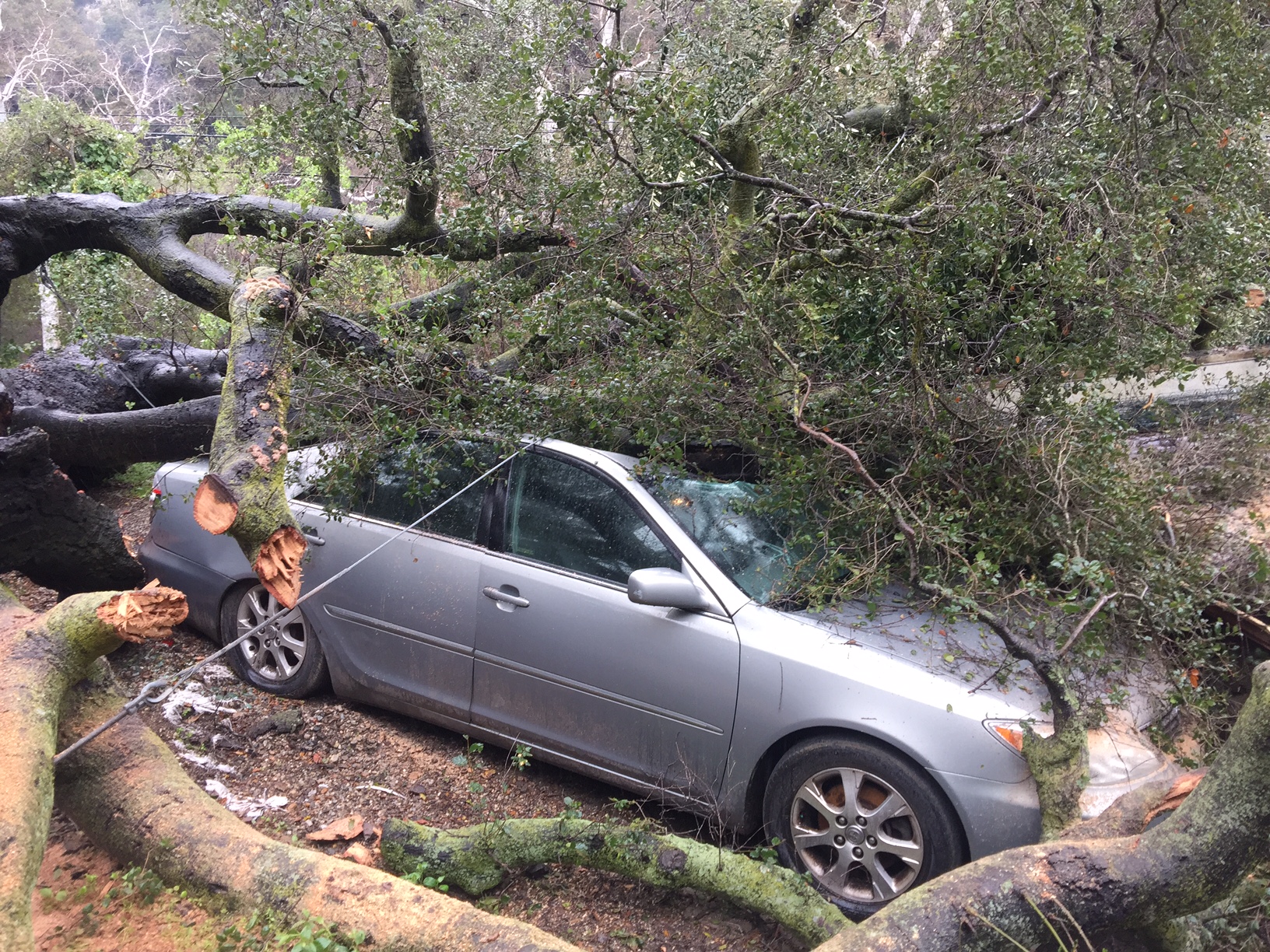 THIS YEARS’ RAINSTORMS ARE A DROP IN THE BUCKET FOR WHAT HAS GONE BEFORE. LOS ANGELES COUNTY RECORDS SHOW THAT TEN “100-YEAR STORMS” DURING THE 20TH CENTURY ADDED UP TO MORE THAN 1,000 YEARS’ WORTH OF 100-YEAR STORMS IN LESS THAN A HUNDRED YEARS.

The Santa Monica Mountains received enough rain for two winters in just a few weeks this year, but almost all canyon roads have been cleared of mud, rock slides and downed trees and reopened.

Longtime residents are breathing a sigh of relief that the weather—and the havoc it wreaked—wasn’t worse. It’s a long overdue reminder, they say, to remember the past and be ready for the next disaster.

The first Topanga storm-related disaster to make headlines was the winter of 1914, when the dirt road leading to Topanga from “The Malibu Road” washed out during heavy rains. Nearly a year later, the Los Angeles Times reported that “road work was being rushed by county construction gangs,” but that “At present the only visitor to the region is the mail man, who rides a horse.”

Flooding occurred again in 1923—not an official 100-year-storm-event—when nine beach houses were swept into the ocean just west of Topanga Beach, and the intersection of the coast road and Topanga Canyon Boulevard was flooded.

In 1934, boulders rained down on Topanga Canyon Boulevard and cars were buried in mud. It happened again in 1938, the legendary flood year that resulted in the channelization of many of Los Angeles’ waterways.

During that event, Santa Monica Canyon was transformed into a raging river, washing a section of the Roosevelt Highway, the original name for PCH, out to sea. The incident made the national news.

“Sections of Roosevelt Highway, main coastal highway, were shifted to the sea like chips,” the Prescott Evening Courier reported on March 4, 1938. “Other sections were covered with landslides 15-16 feet deep…Malibu Beach, the swanky seashore movie colony, was as isolated as Robinson Crusoe’s Island.”

Topanga and Las Flores Canyons were also isolated. All residents west of Santa Monica Canyon faced long detours for weeks while the damage was repaired.

In January 1956, they were trapped again. Lower Topanga Canyon, Las Flores, Malibu Canyon and West Channel Road were blocked for days. A massive landslide shut down Pacific Coast Highway (PCH) for almost a week. The slide brought down a 270-foot section of the palisade onto the road, blocking all lanes. Amongst the debris was said to be an entire garden, complete with patio, rosebushes, trees, and lawn furniture.

In 1960, the county abandoned the old Topanga Canyon Boulevard intersection, located about 150 feet west of the current intersection on PCH. Years of flooding by the creek had nearly obliterated the old road. It may have been a timely decision because the 1960s brought the area some of the worst flooding on record.

“Malibu Lake residents who hired a rainmaker in 1961 to bring them water, prayed Saturday for someone to turn it off,” a Los Angeles Times article quipped in the winter of 1962. The dry lake filled to dangerously high levels and water poured over the dam spillway.

Topanga Canyon received 14.15 inches of rain in the deluge. One family had to be rescued from their Observation Drive home after their house began to slide into the road.

Topanga’s history bible, The Topanga Story, recounts how Red Rock Creek overflowed turning the road into a river, ripping up oak trees and leaving devastation behind. Mud swamped part of the old school, filling one building “to the doorknobs.” Many families were trapped in their homes, unable to cross the creek.

The flooding in the early 1960s was so costly that in 1966, County Engineer John Lambie proposed a county ordinance prohibiting property owners in the Santa Monica Mountains from removing brush on land with a slope greater than eight percent. Various flood control projects were proposed, a few were even implemented, but none of them helped prevent the catastrophic flooding that occurred in January 1969.

A Los Angeles Times article described Topanga Canyon residents, emerging on foot from the canyon after the deluge, as “refugees from a battle. Along the Topanga Canyon floor, cars, like boulders, lay half buried in mud,” the Times reported. The canyon road washed out in three places. Between the washouts were “mudslides hundreds of feet wide,” according to the article.

Topanga Creek swelled to a river 100 yards wide in places. The Times reported that at least ten vehicles on PCH near the mouth of Topanga Creek were swept away when the flash flood reached the coast, including a “small bus” that was carried out to sea.

Coast Guard helicopters were sent in to look for survivors. As many as 500 residents were trapped in the canyon.

The rains devastated communities throughout the state, resulting in a California-wide state of emergency. In the Los Angeles area alone 100 people died. Four of the victims were Topanga residents: 32-year-old Gale Gordon and her two children, Mathew, 3, and Heather, 6, died when the hillside behind their home swept the house into the creek. A 34-year-old Old Topanga Road man was killed when his house was buried in a mudslide.

The nightmare was repeated in 1980, when flash floods tore through the canyon, carrying away houses, cars, trees, boulders, a school bus, and two large sections of the canyon road. Residents were left without water or power, and with no viable way out of the canyon, but at least this time there were no known casualties.

The Topanga Messenger described the rains as arriving with “terrifying suddenness.” It took two months for the road to be repaired. 1980 has gone down in the records as “The Great Flood Year.” It left PCH closed at Big Rock for months, forcing coast residents to take a temporary ferry from Malibu to Santa Monica, or to detour all the way around the mountains. Many parts of California declared a state of emergency.

In 1993, the canyon was once again transformed into a river. Floods generated by heavy rains turned hillsides stripped of vegetation in the 1992 Old Topanga Fire into mud flows. One man died trying to cross the creek. Many were left without power or a way to safely evacuate.

In the wake of that disaster, a group of residents formed the Topanga Coalition for Emergency Preparedness (TCEP) to help educate and empower canyon residents to know the risks of living in the canyon and to be prepared for disaster.

Longtime residents say 2017 hasn’t been too bad, so far at least, but it’s always good to be prepared for the worst because, sooner or later, the worst—fire, flood, or earthquake—is going to happen. It’s the one downside of living in paradise.

More information on TCEP is available at http://t-cep.org/emergencystatus/.