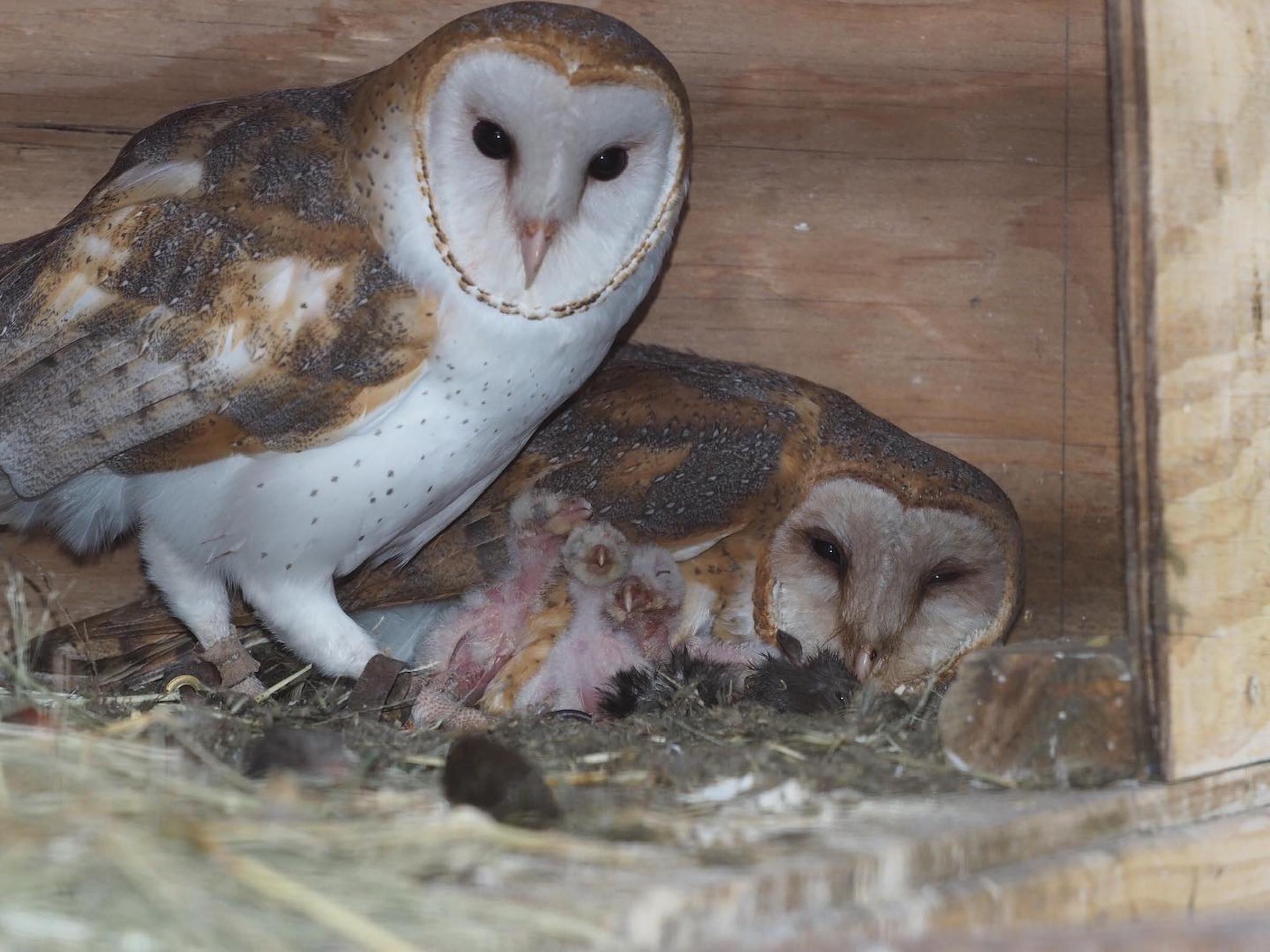 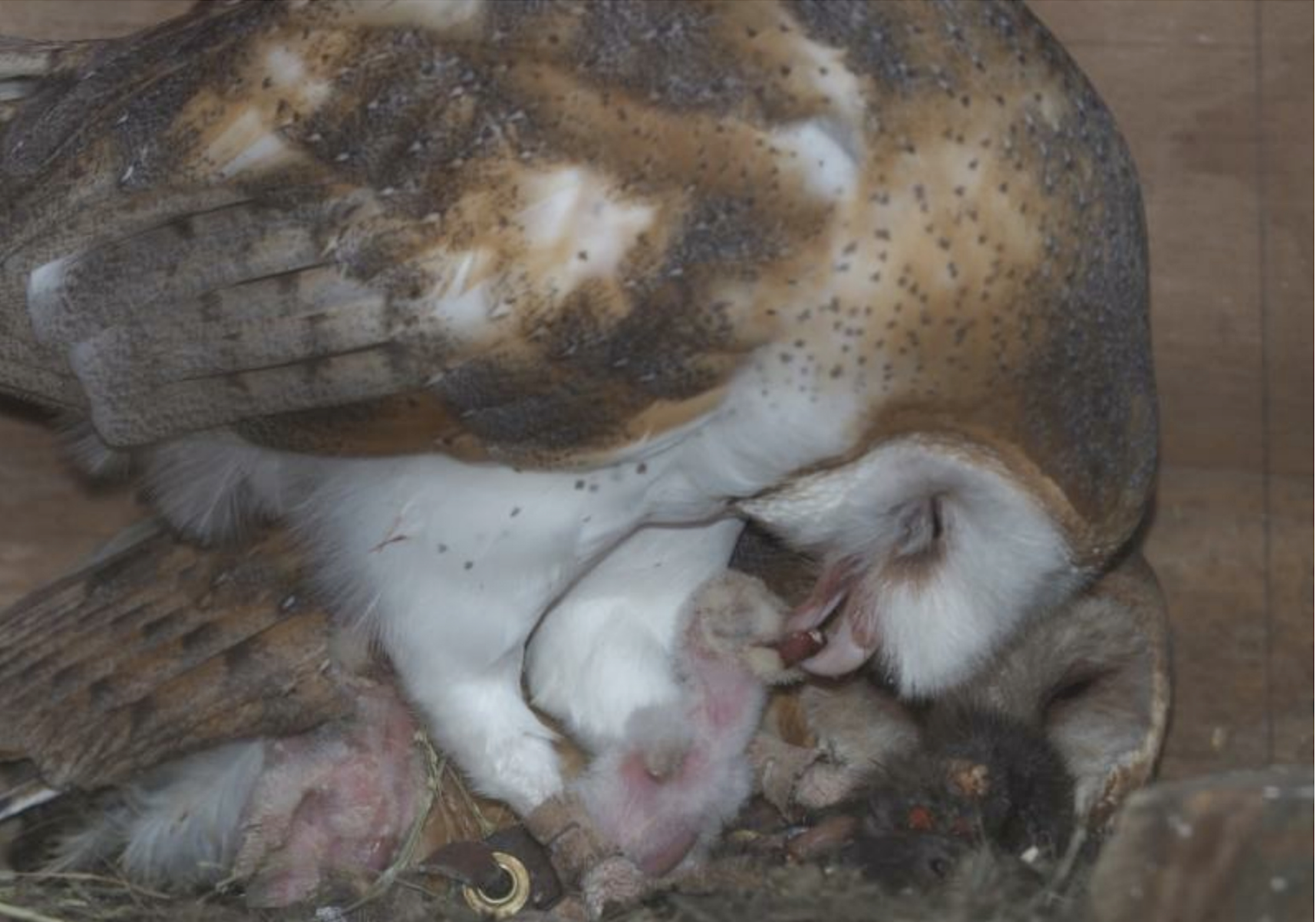 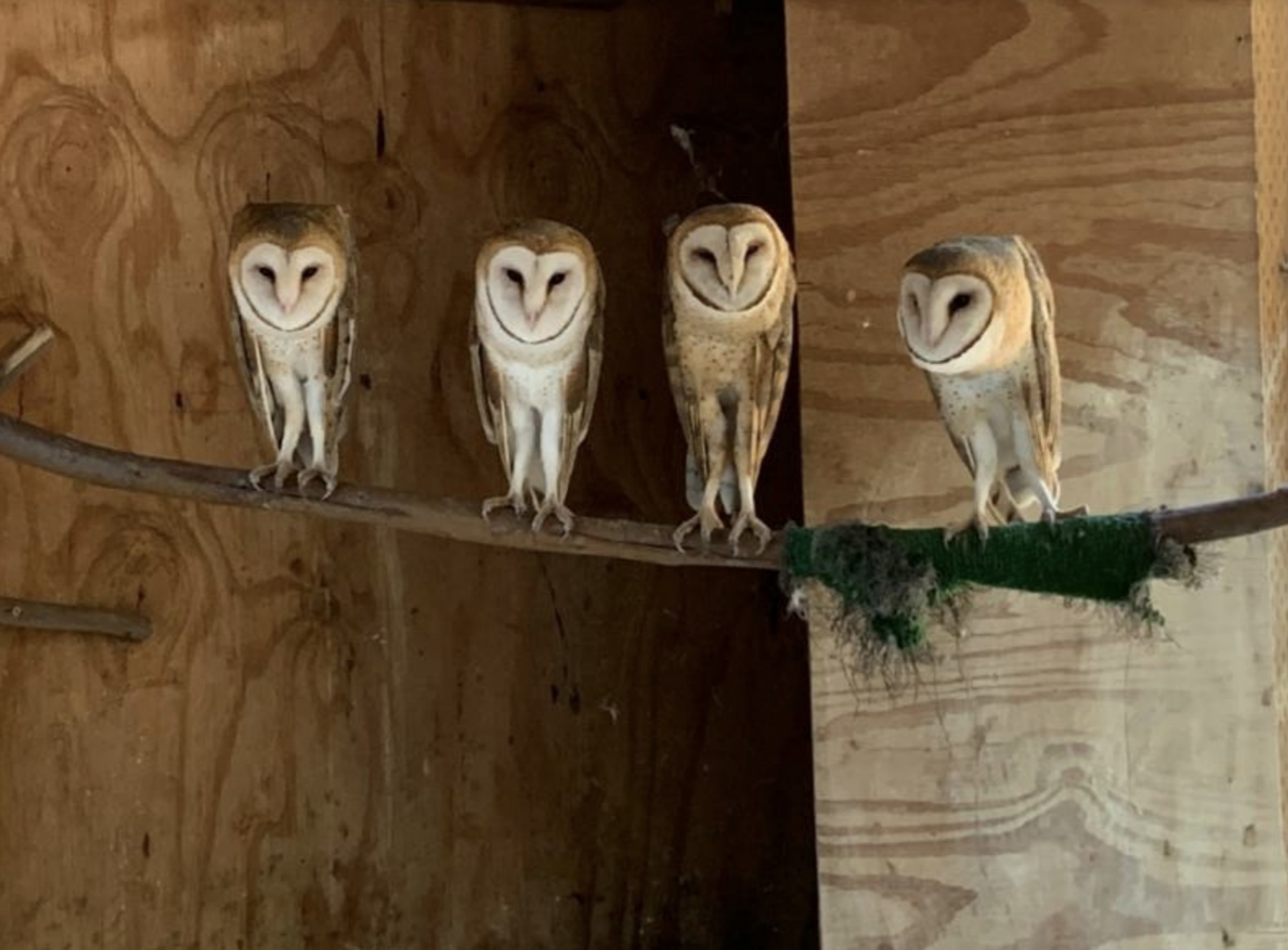 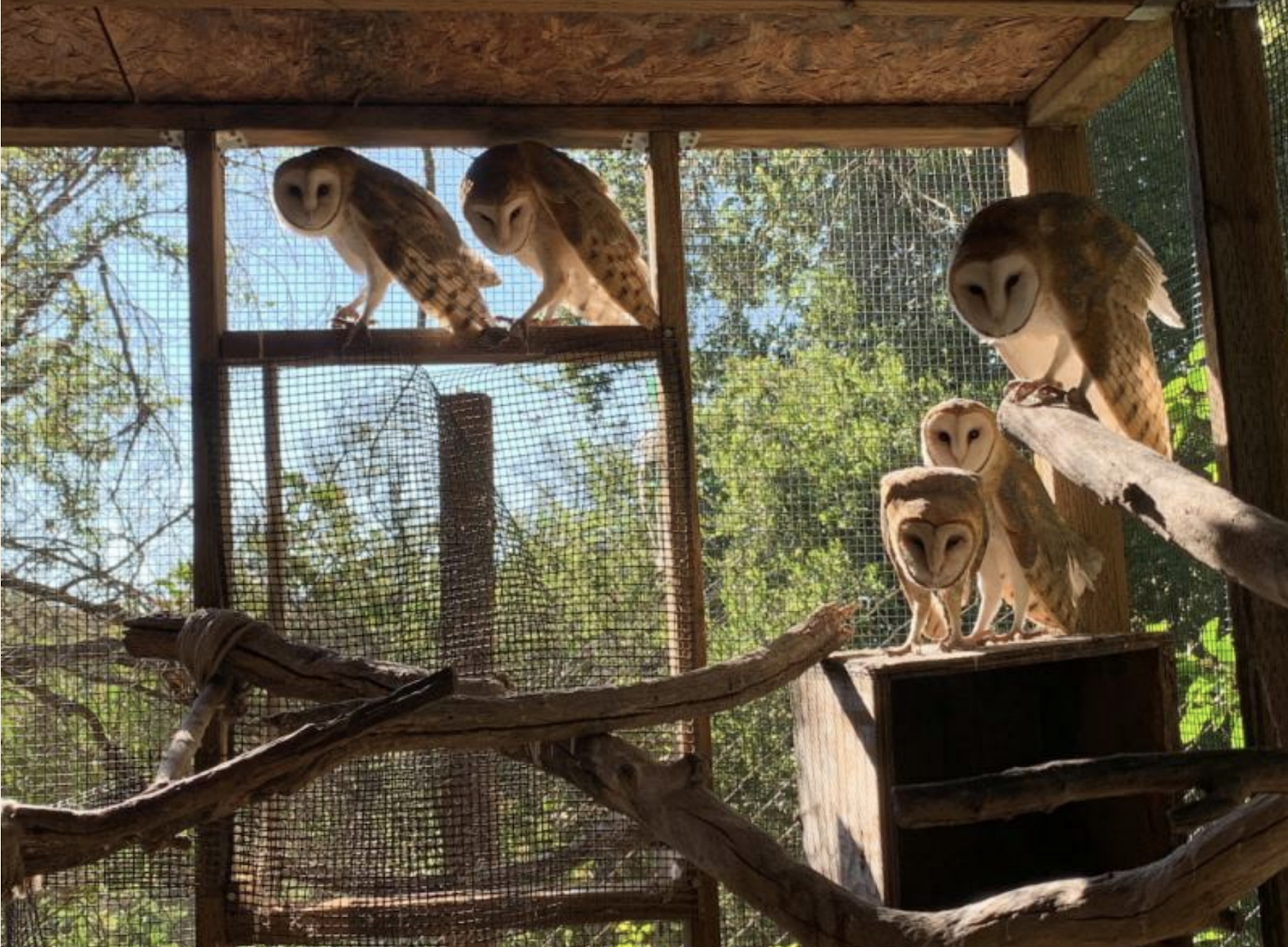 In her latest newsletter, Nature of Wildworks founder Molly Hogan shares the latest chapter in the remarkable story of the barn owl Dancer and his family. She calls this update “Empty Nest.”

This special family of owls have shown us up close and personal how instinct reigns the roost in the barn owl kingdom. Barn owls have superior vision in the dark and the light, and the very best hearing of any animal. But I never would’ve guessed that a male barn owl, who was hand-raised as an orphaned chick by humans, would attract, with his seasonal mating call, a severely determined mate from the wild who would manage to squeeze her feather-covered skeleton through a crack in the enclosure to join her true love. Nor that they would automatically know what to do next!

After consummating their relationship, the female, Sonata, laid 4 eggs and lay flat on them for about a month to keep them at owl temperature, while her devoted husband, Singer, delivered the food to her from the floor of the enclosure. Fortunately, we have a feeding window so we could toss the defrosted rats, mice, and chicks in for them without entering the cage. Singer became dangerously protective of his mate and future family, and would dive-bomb any human who entered the enclosure. We had to wear the equivalent of a suit of armor just to change out the water.

I actually thought that the eggs would not be fertile, as our older barn owl, Dancer, lays and sits on eggs every year without a mate. But then we saw a little movement under Sonata and in no time at all her 4 eggs had hatched into 4 owlets! The eggs hatch a few days apart so the owlets aren’t all the same age nor the same size. When the mom starts moving away from them they look like little creepy balls of white fluff—like a dandelion with a monster face. And then they start screaming “feed me, feed me”. It was fun because when I would walk around the facility at night with a flashlight they assumed, as any owl might, that I was heading to feed them and they would scream when the light was near them.

Dad was great. It was his job throughout the entire month of their growth to deliver the food. Once mom no longer needed to keep the chicks warm she bailed and perched up high and far from the nest completely turning the care of the young over to the male. When they were fully feathered and it was time for release, we weren’t sure what to do because even though they were flying around the cage we never saw them go to the ground to pick up the food themselves. The big babies still waited for Dad to serve them their meal.

Having never done it this way I couldn’t predict how the release would go. I decided to separate the mom and young, moving them into an enclosure on the opposite side of the facility. Magically, when there was no Dad around, they learned to fend for themselves. Sound familiar? Almost immediately they were flying to the ground to pick up the food.

Their new enclosure had been empty for a while and had an open window which needed to be repaired, so I covered it with mesh. Then after giving the owls about a week to adjust, I picked a night around 10 pm, after their crepuscular enemies the great-horned owls, were no longer hooting, and pulled the mesh off the window. They all perched in a row and looked at me as I left the cage and then left them alone to make their decision.

In the morning they were long gone and we haven’t seen or heard from them since.

As we all know, love often fades, and apparently any feelings of lust and longing are removed completely from the barn owl psyche in the months outside of the spring breeding season. I was sure the mate would return and hang out on Singer’s enclosure, but I guess we’ll just have to wait for springtime to see if it will happen all over again. It just might.

In the meantime, Singer is enjoying his bachelor status and new lack of responsibility, and is back to work in outreach programs, where we hope you will see him soon.

And that’s the end of a truly wild love story….at least for now!

To learn more about Nature of Wildworks or to make a donation to support this non-profit’s work, visit https://natureofwildworks.org

Hearts for the Holidays

SAVE THE DATE: Topanga Earth Day Event is April 27