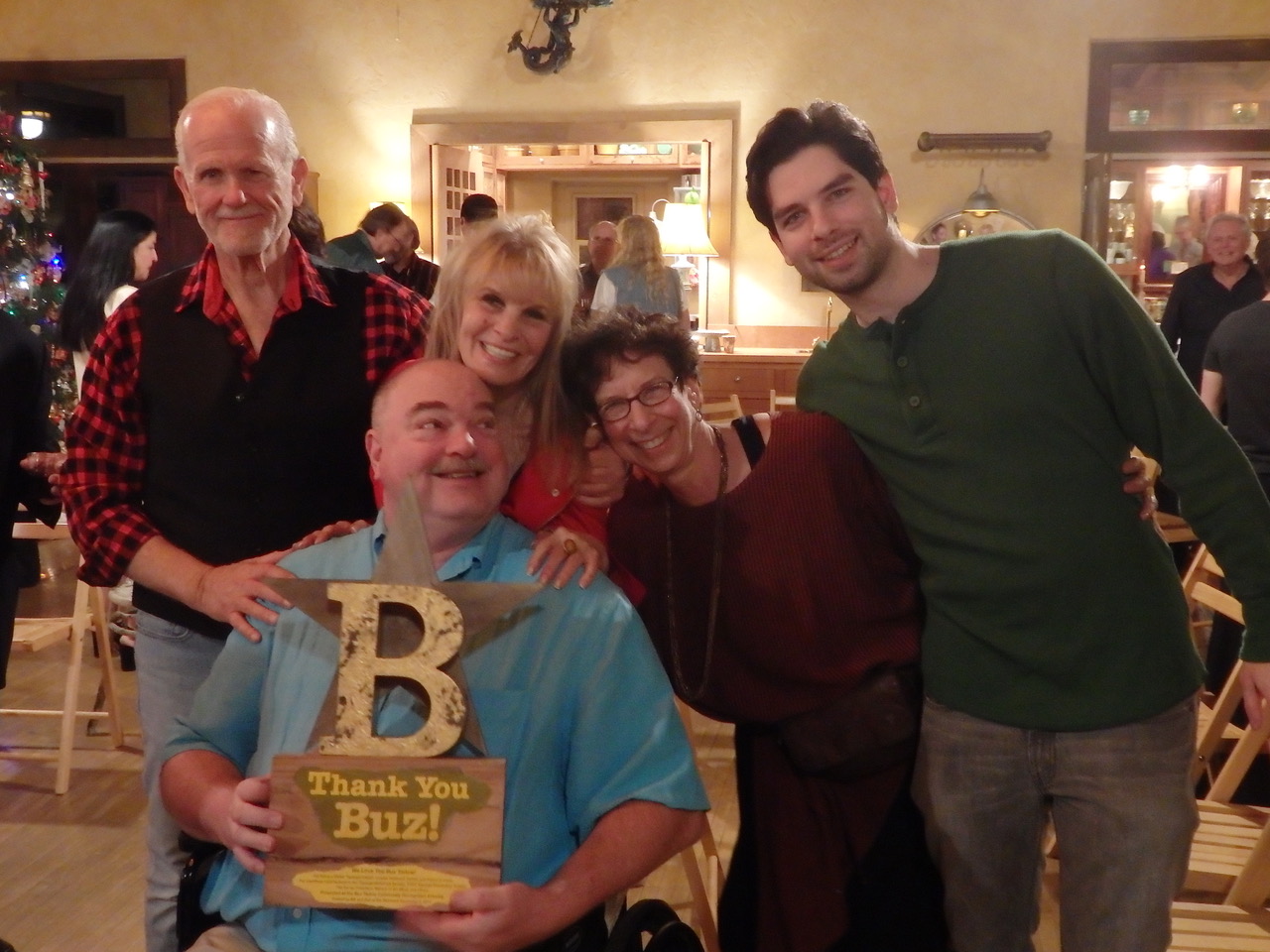 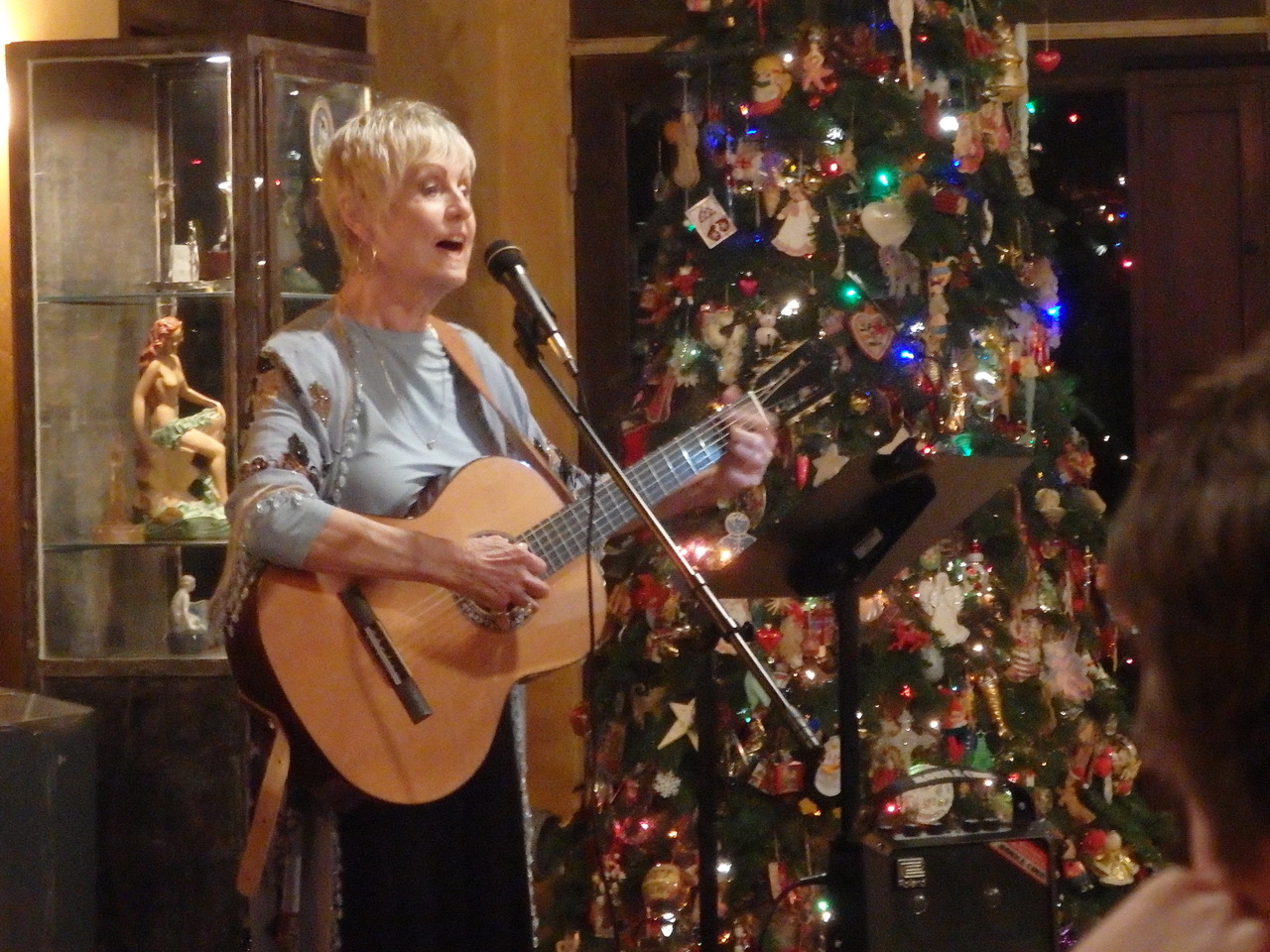 Susan Lovell performed "Celebration of Buz," a song she wrote for the occasion. 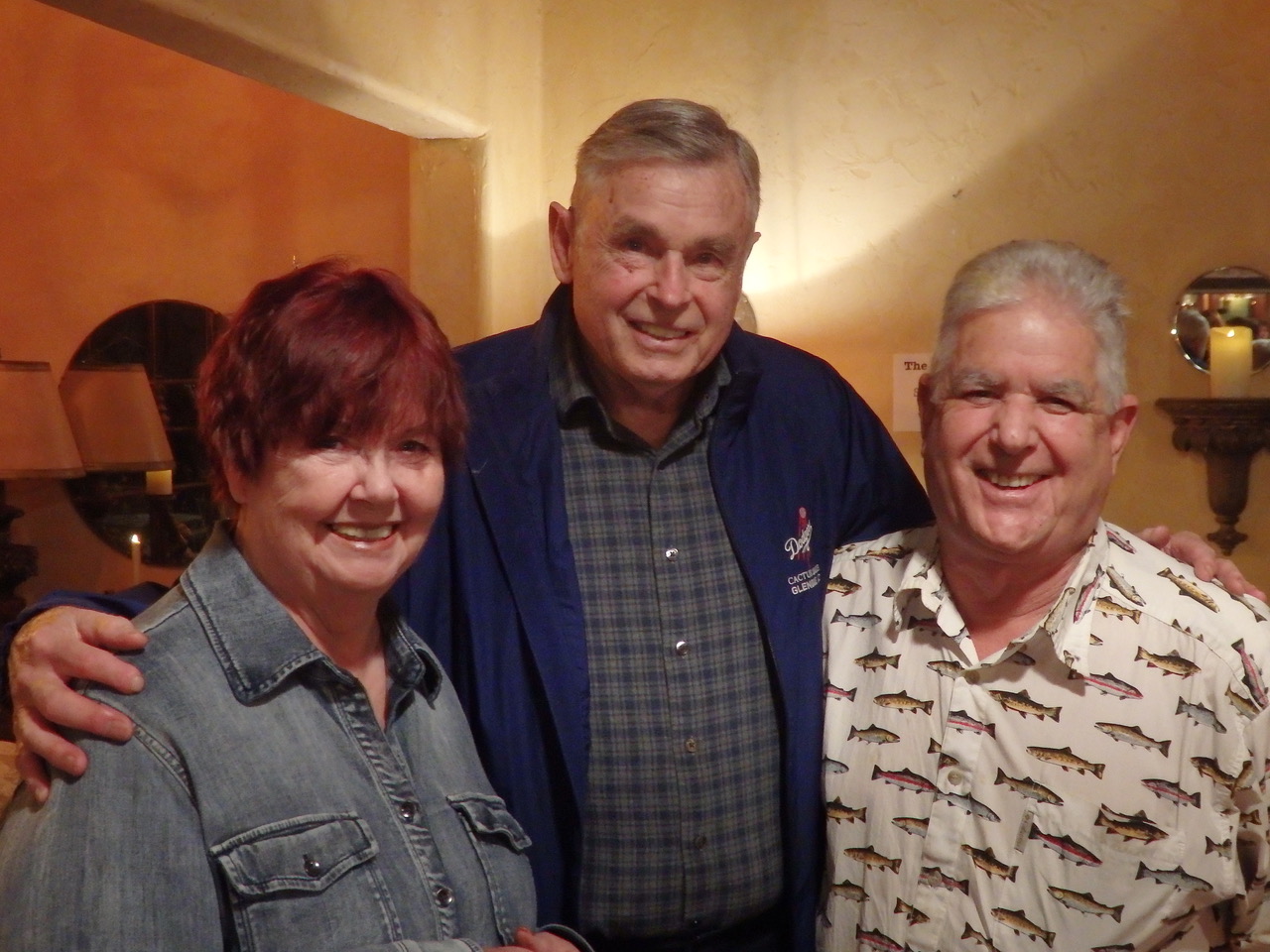 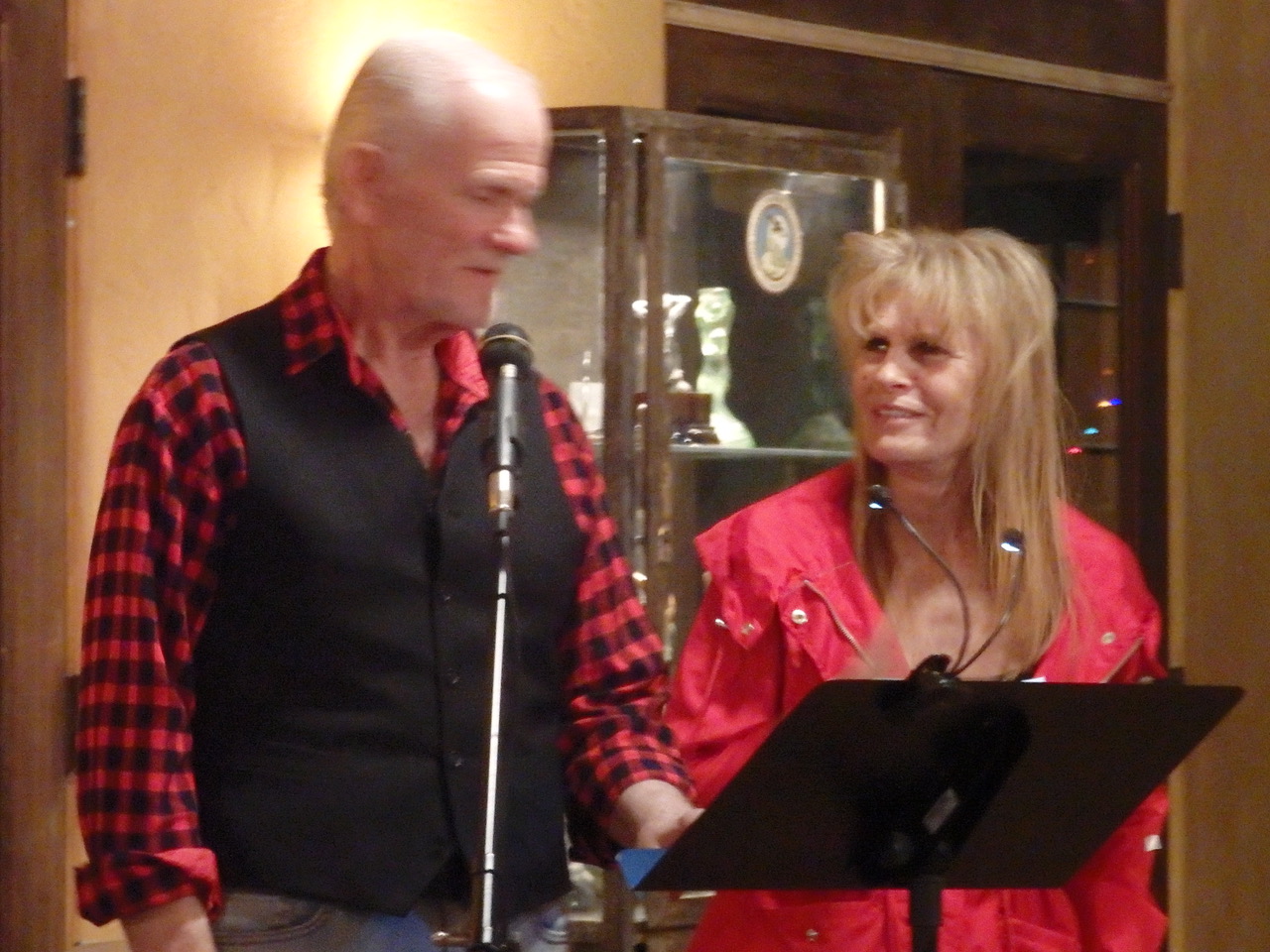 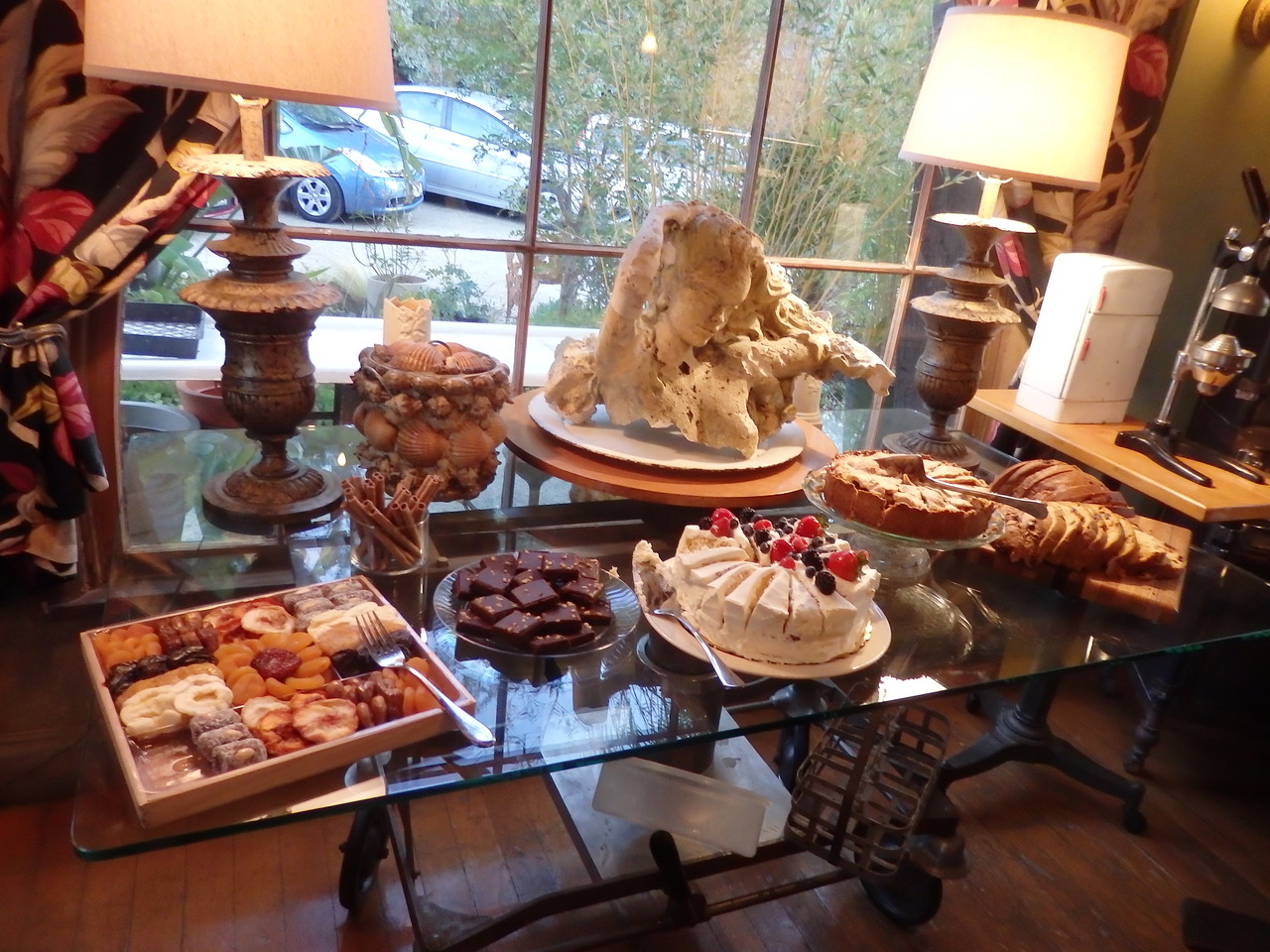 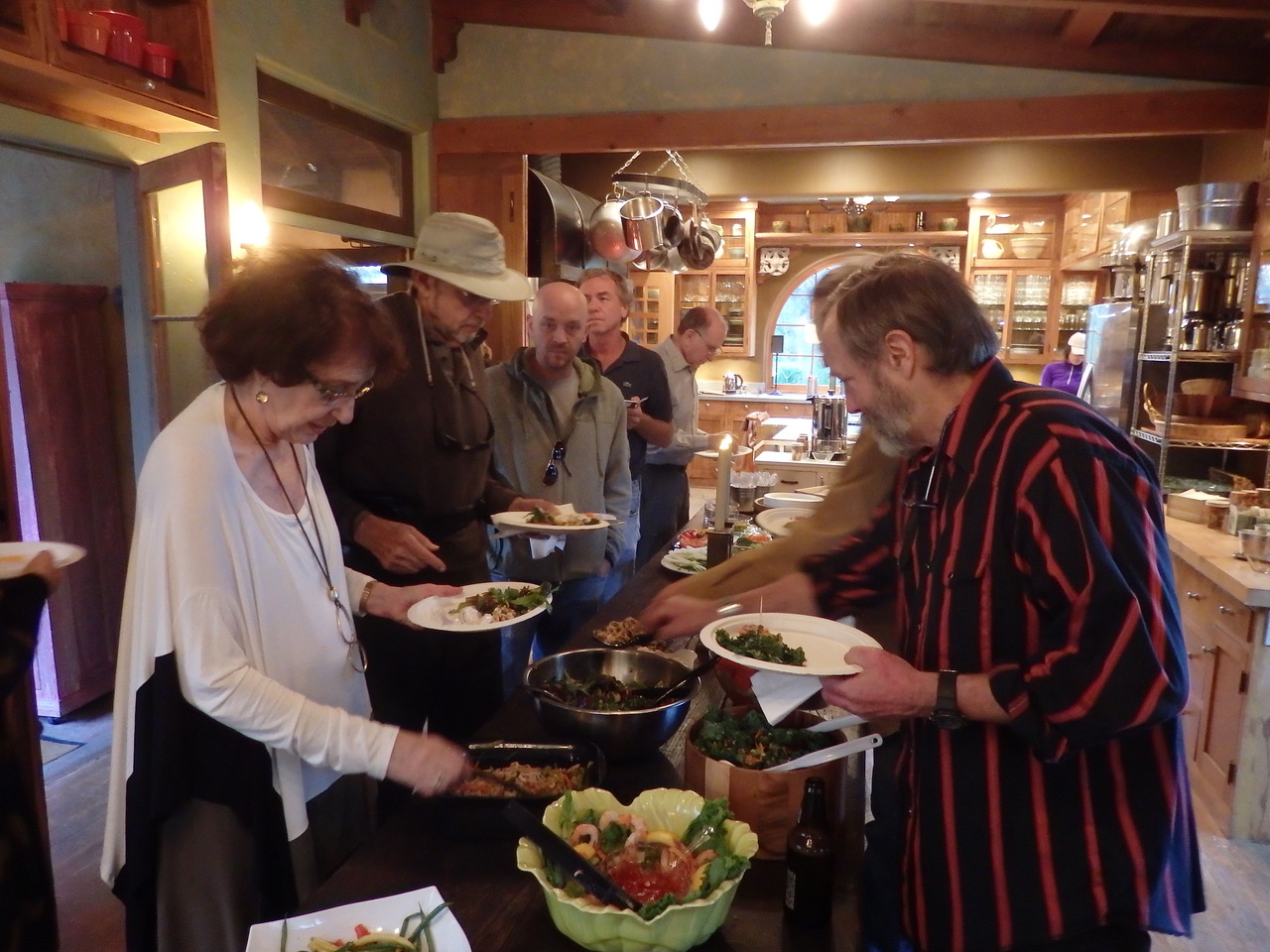 MOUNTAIN MERMAID HOSTED A CELEBRATION FOR AN EXCEPTIONAL TOPANGAN. MORE THAN 150 FRIENDS SHOWED UP FOR THE EVENT

While it was cold and windy outside, it was warm and cozy inside at the Mountain Mermaid on Dec. 3 where Bill Buerge and Gail McDonald generously hosted an event to honor Buz Tarlow, the president of the Topanga Historical Society (THS), for his longtime and significant work in the community.

Indeed, more than 150 of Topanga’s movers and shakers, friends and neighbors joyfully gathered to greet each other as if it were homecoming week.

“It’s an incredible pleasure to see everyone in our little village come home,” said McDonald-Tune. “It feels really good…it is so special to celebrate this man.”

Topanga legend John Stevens travelled from Yucca Valley (near Joshua Tree) to honor Buz, whom he knows through THS, the Topanga Coalition for Emergency Preparedness (TCEP) and the Disaster Radio Team (DRT).

“I felt it was important,” Stevens said. “I mean, the things he’s done for the Topanga Historical Society.”

The evening began with Susan Lovell’s song, “Celebration of Buz.” The composer of “Topanga Anthem,” and an album of the same name, Lovell writes beautiful songs about her beloved canyon.

Topanga filmmaker Bruce Royer set up a video montage of photos, many taken during the Tarlow’s epic Halloween parties at their home in the hills off Entrado Road.

Almost from the first year he and his wife, Terry Marks-Tarlow, moved to Topanga, Buz has involved himself in community matters as a devoted and useful volunteer. After serving on the THS Board, Buz took over as its President from Gerry Haigh in the early 2000s.

“He took the Topanga Historical Society to another level,” said Beurge. “Because of Buz, we have as much money as we have ever had; he is an amazing leader.”

Tarlow also brought his considerable computer programming, networking and video skills into play for the Historical Society and is credited with getting a county grant for the publication of the “Topanga Story, Expanded Edition.”

“Buz was our main contact with the grant to help pay for the second edition of the ‘Topanga Story,’ Susan Nissman said. “He also worked with the DRT and TCEP. ”

TCEP Co-founder Pat Mac Neil added to the praise at the tribute: “He helped start TCEP,” she said. “We needed radios and all kinds of equipment. He would be on the phone with us for hours explaining how the computers work and he was running HAM classes so we could use the little gems [radios] to help us out.”

Tarlow said he also worked for years writing custom computer programs for TCEP. “I am very proud I have volunteered for TCEP for 22 years,” he said. “I am an experienced disaster ham radio operator and technical operator. I designed, installed and set up the radio system at the new EOC, then switched to doing the computers for TCEP. It is a world class custom-written computer messaging system, which to this day they still
use.”

One cannot talk about Buz Tarlow, a Harvard grad, without mentioning he was also a rowing coach for many years in Boston and later at Marina del Rey. According to a Los Angeles Times article published in 1996, “the onetime Harvard sculling coach has been training Southern Californians in this Ivy League art for four years, in addition to his club’s less-rarefied disciplines of sailing, canoeing and kayaking.”

Tarlow moved to California in 1989 from Boston where he designed and owned half of a small factory that made high-end rowing machines: “I sold the design rights to a company in Orange County…they liked it, they liked me and I became their director of development.”

Later, Tarlow started the Southern California Boat Club at Marina del Rey where it grew until it had about 250 members, 12 coaches and 42 boats in the Marina including Olympic scull rowing shells, ocean-going kayaks and sail boats.

“We were a yacht club that came with the boats; that’s why we had 42 boats,” Tarlow said. “We provided boating education and boating programs for Los Angeles Community College; Santa Monica College; Antioch; the City of Beverly Hills; City of West Hollywood; as well as the Learning Annex and the Learning Tree. We also ran the racing teams for Pepperdine University and the USC Men’s Club team.”

During this time, Buz met Terry, through her sister, Patricia Greenfield, who is a Harvard Ph.D. Marks-Tarlow, a Stanford graduate and UCLA Ph.D., is a clinical psychologist in private practice in Santa Monica. She is also the author of five books, an illustrator, artist, curator and librettist.

After they married, Buz and Terry lived in Venice, CA, but their house was too small. In 1995, with a second baby on the way, they moved with their son, Cody, to Topanga where their daughter, Darby, was born.

Cody, now 22, recently graduated Highest Honors from the University of Santa Barbara with a major in communications and a minor in technology management and works in a well-paid computer industry job in Long Beach, CA.

Their 20-year-old daughter, Darby, is a Cornell Scholar studying dynamical systems. She received the prestigious “Rawlings” scholarship offered to only about one percent of Cornell students.

The Hunter R. Rawlings III Cornell Presidential Research Scholars (RCPRS) program supports a select group of undergraduate students, from all colleges and many disciplines, by providing resources for and promoting sustained engagement in research in close relationship with faculty and other mentors.

Darby was unable to attend the event, but sent in a beautifully written tribute to her dad that included a hilarious play on his name—Buz for public, Buzz for friends and Buzzzz to the infinity for family!

In his tribute, Cody recalled his father’s admonition to him: “I will do everything I can for you; I ask of you to just give me your best in return.”

“I am fortunate to have such a father,” Cody said.

As a widely regarded “super dad,” when Cody and Darby were little, Buz stepped in to help rebuild the Topanga Co-op Preschool and later, helped develop the science and computer lab at Topanga Elementary.

“With Susan Nissman’s help, we managed to found a computer lab with brand new computers,” he said. The Tarlows also helped found the Science Lab at Topanga Elementary.

“Terry had a big role in that,” Tarlow said. “There were many very dedicated parents. Terry co-led the parents’ fundraising for the school.”

“We love living here,” Buz said. “There is a Topanga spirit and it is a great place to raise kids. You work hard and have good morals and, of course, I am amazingly lucky to have Terry; having kids is the best thing I have ever done. My number one priority is to be a good dad.”

For his years of accomplishments, Tarlow said, “I love working and sharing with people. I lead by following…I am happy because people do more than I do. Everything I have done has always been a group effort; thank you all for letting me be a part of it,” he concluded as his community of family and friends rose to honor him further with a standing ovation.